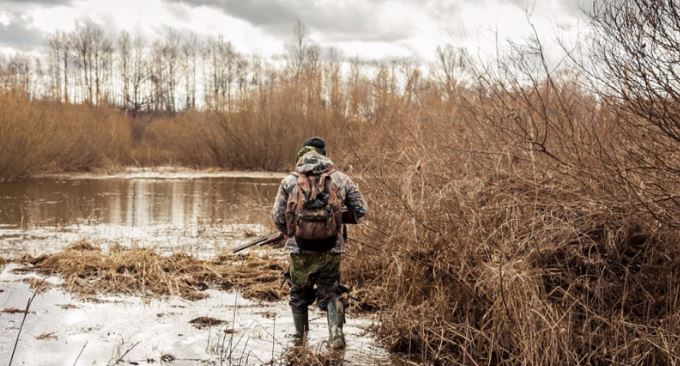 Picking camouflage clothing can be difficult. The reason is rooted in the variety of existing hunting camo patterns and hunting brands coming up with new ones every year. On the other hand, military clothing also uses patterns of various kinds. With the popularization of tactical clothes and gear, many hunters started wondering if there was any difference between hunting and military camouflage.

In this article, Gritr Outdoors discusses how military and hunting camo differ. Read on if you’re on the fence about what camo patterns work better and want to know whether you can use military camo for hunting. Let’s get started.

If you’ve watched movies about wars taking place before the 20th century, like Patriot or The Last Samurai, for instance, you know that today’s military activities are nothing like in those times. The soldiers wore red, blue, green, or other bright solid-color garments to easily distinguish their army from the enemy.

In the second half of the 19th century, several armies started introducing uniforms of muted solid colors that more or less aided in concealment. During the First Boer War, the British army faced the enemy equipped with advanced long-range repeating weapons. Military men wearing bright uniforms became a prime target. The Boer won the war, and the British had to force changes in clothing. Thus, the khaki uniform was adopted. 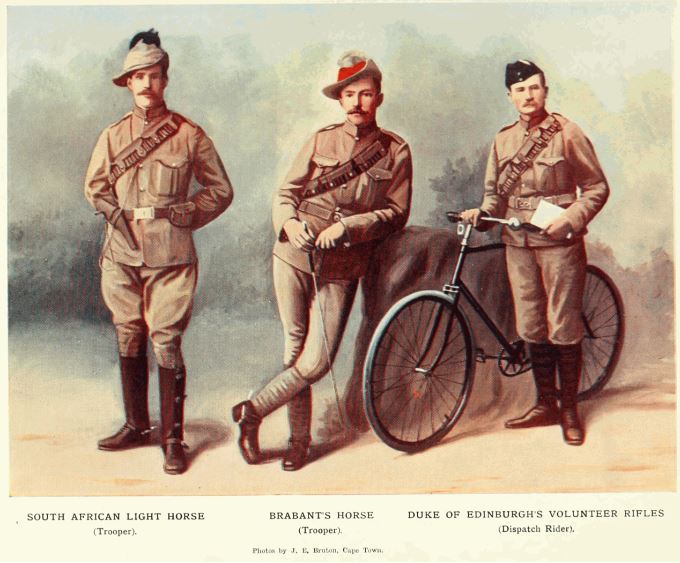 However, during the following decades, the nature of warfare changed. The first camouflage uniforms were adopted by the French, German, and English armies during the First World War. Since then, numerous camo patterns have appeared. The most popular U.S. patterns include Frog Skin, ERDL, M81 Woodland, and Multicam.

Camouflage for hunting wasn’t a thing until the late 70s when Jim Crumley introduced the famous Trebark pattern. The pattern was so successful that many hunting brands started manufacturing hunting camo. The demand for hunting camo clothing skyrocketed in the late 80s and continued through the 90s because of the increased turkey and whitetail deer population.

The patterns developed by the military were helpful to hunting brands trying to keep up with the demand for hunting camo. Even today, you may see many contemporary hunters wearing M81 Woodland and having no problem. Even though hunting camouflage was derived from military camo, these are two different things today. But why is that?

The main purpose of both hunting and military camouflage is to provide concealment to blend a person with the surroundings and prevent detection. The difference is from whom we want to conceal our presence, from animals or people. It’s fundamental.

The organs of perception of humans and animals work differently, which influences the ability to acquire and interpret information.

Let’s consider the vision. You’ve definitely heard something like animals see in black and white. Well, that’s not exactly true, but many game animals indeed perceive colors in an unlike-human way. Humans have trichromatic vision, meaning we see red, blue, and green. In contrast, ungulates are dichromatic and can’t see the red spectrum.

So, military and hunting camos differ in the colors they need to have. Military camo covers more colors because it should hide you from the human eye. Hunting camo has fewer colors because most animals have limited color-perception abilities. 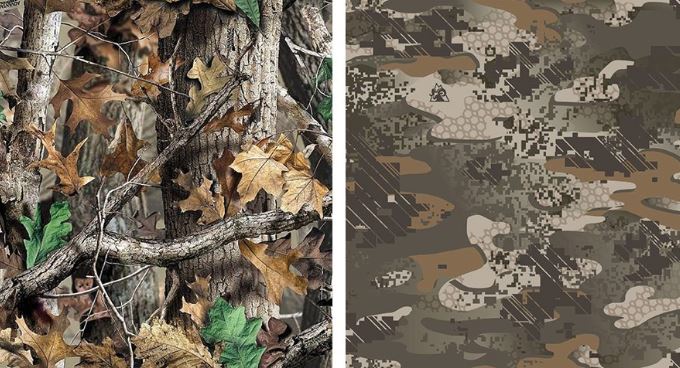 The patterns also differ greatly in military and hunting camo, though there are overlaps. All camo patterns can be divided into mimicry and disruption (otherwise called digital or breakup).

Mimicry camouflage uses the images of objects found in nature, such as branches, bark, grass, and leaves. In contrast, digital camo uses abstract shapes that break up your outline, making it hard to separate you from the background.

While mimicry camo works great when you stay still in one place, it becomes worthless as soon as you start moving. That’s why you won’t see military camo with images of branches and leaves.

Opposite to mimicry, breakup camo conceals both movements and a stationary position. As many hunting scenarios include sitting still, a proper set of mimicry camouflage that accounts for environmental characteristics works just fine. In contrast, military camo needs to be multifunctional.

As you see, some military-specific patterns work great in hunting. So let’s break down what camo types suit what hunting scenarios.

We discussed how perception varies from humans to animals. Now let’s consider how perceptions of birds and mammals differ. Yes, picking camo for these two game groups requires different approaches. 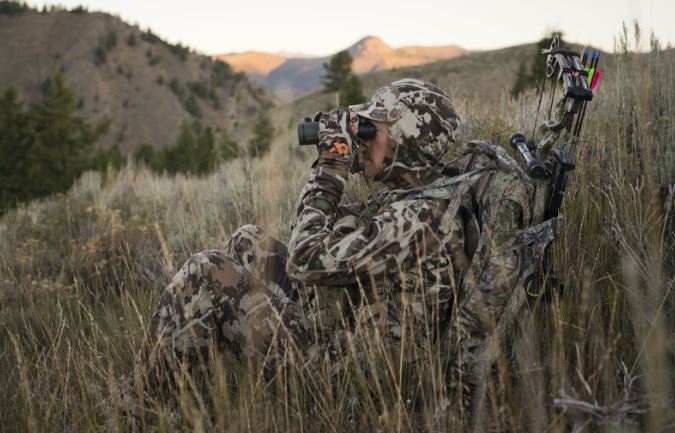 Deer and other ungulates are red-green color blind, which means they can’t tell between reds, greens, oranges, and browns. That’s why many states require wearing blaze orange garments that won’t give you up to animals but will be visible to other hunters. So never disregard this requirement. As deer see the blue spectrum very well, don’t wear anything of blue color on your whitetail trips.

Deer are good at seeing the UV spectrum as well. UV light can be described as a type of glowing light, and deer and elk see this glowing very well, especially in low light conditions. For that reason, stay away from color brighteners that enhance the UV.

We’ve already touched upon the visual clarity. Ungulates have slightly blurry vision, and for that matter, they focus on contrasts and outlines. So don’t use mimicry camo as your deer hunting clothing because deer won’t be able to check out all these beautiful photorealistic objects, and your outline will make you look like a big blob. The best camo for hunting deer is breakup camo with higher-contrast patterns. Such camo will also conceal movements to which deer and elk are very attentive.

Hunting deer from a treestand requires more white areas and smaller pattern elements to blend you with the tree leaves and skyline. On the ground, bigger elements may break up your outline better.

As far as other features go, look for scent control and quiet fabrics, especially if you’re a bowhunter. 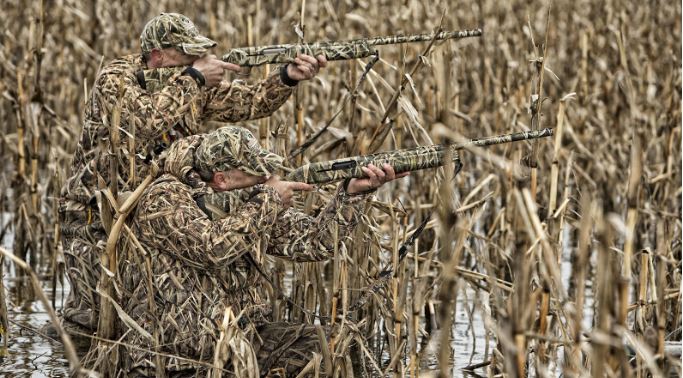 Choosing camo for bird and waterfowl hunting is a different story. Unlike ungulates, birds have great depth perception and see a vast range of colors. For that reason, your odds of success increase with mimicry camo.

Mimicry camo should reproduce the colors and natural patterns of the environment. For duck hunting, use marsh or waterfowl camo patterns. Such camouflage has images of vegetation naturally found near swamps and marshes.

Turkeys roost in different environments like near water bodies, trees, and open lands. Moreover, the colors and vegetation schemes of locations change as the season progresses. So you should pick a camo that matches the overall environment.

In spring, your turkey camo may contain more shades of brown color. Later on, as plants and trees flourish, change your brown camo for clothing with a lot of greens. By the way, here is where your Woodland camo pattern can work. Use waterfowl camo if your turkey hunting takes place near water.

Turkeys, ducks, and other waterfowl are sensitive to UV light, so camouflage everything, including your hands, face, and hunting gear. Grab a pair of hunting gloves to mask your hands. For concealing your face, get a mask and face paint. To prevent your weapon from reflecting the light, it should have a matte finish.

As you see, hunting is different. For big game harvesting, you need a breakup camouflage that can be either hunting camo or military camo. As long as it contains high-contrasting colors that match the terrain, you’ll be fine. Before hunting deer or elk, check your local regulations for blaze orange requirements.

Turkey and waterfowl hunting requires a mimicry camo with images of branches, leaves, reed, grass, and other objects found in your hunting spot. Breakup camo makes less sense because birds have great eyesight. However, good old Woodland patterns can work if your stealth skills are at a high level.