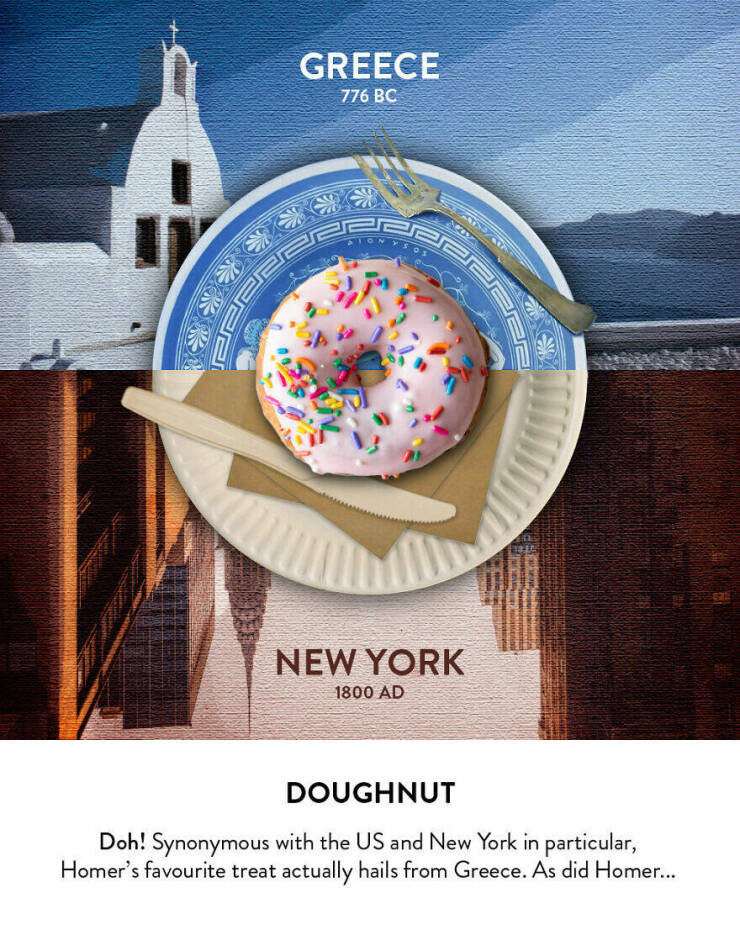 Where we think doughnuts are from: the USA (New York).

Where doughnuts are really from: Greece.

Dunkin’ Donuts and Krispie Kreme are just a couple of big American brands that have made a global name for themselves purely through the sale of this incredible dessert. But doughnuts aren’t the American all-stars you might have thought they were. Though they didn’t have the distinctive ring shape, the earliest version of the doughnut as we know it today is generally traced back to when Dutch settlers brought them over from Europe to New York (or New Amsterdam as it was known then).

But Greece is where the heart of the doughnut lies. Loukoumades as they’re known are essentially small doughnut balls covered in honey and walnuts. They’re considered to be the oldest recorded dessert too, dating right back to the first Olympic Games in 776 BC, where they were presented to the winners as “honey tokens”. 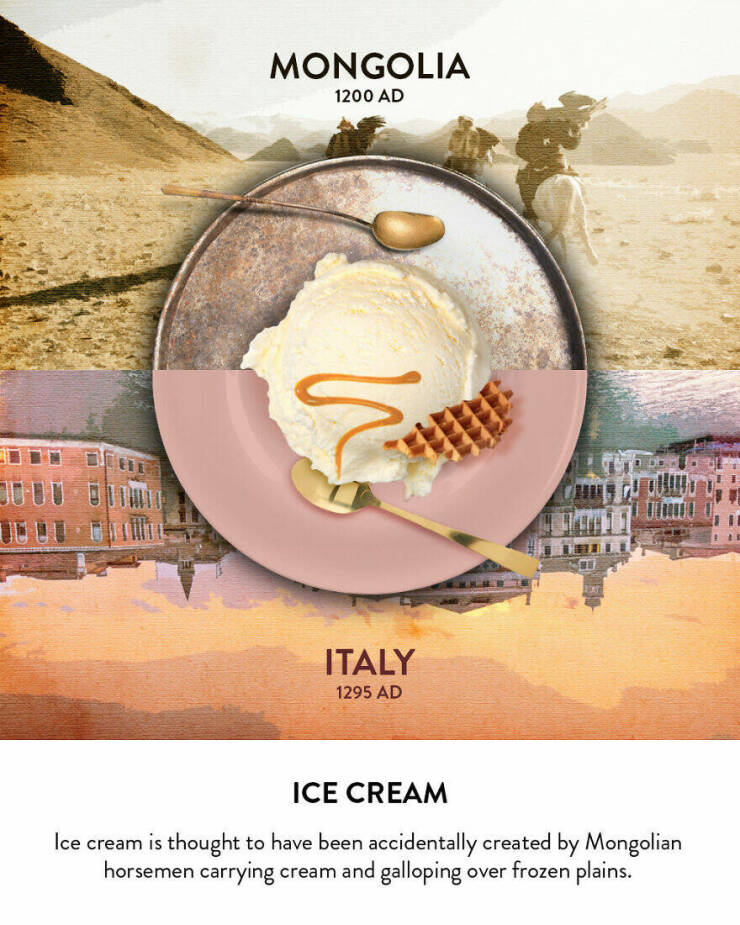 Where ice cream is really from: Mongolia.

The Italians are known the world over for the quality of their ice cream and gelato, and you’d be forgiven for thinking they were indeed the inventors of this delicious sweet treat, but you’d be wrong. That accolade actually goes to Mongolia… or so the story goes.

OK, so not the ice cream we know and love today, and it happened completely by accident too. It’s said that Mongolian horsemen would carry buffalo or yak milk across the Gobi desert in containers as provisions, but as the temperature dropped and they galloped, the milk would freeze as it churned. As the Mongol empire expanded in the 1200s, so too did the popularity of this new iced milk/cream thing and it’s said Marco Polo took the idea back to Italy at the end of the 13th century. 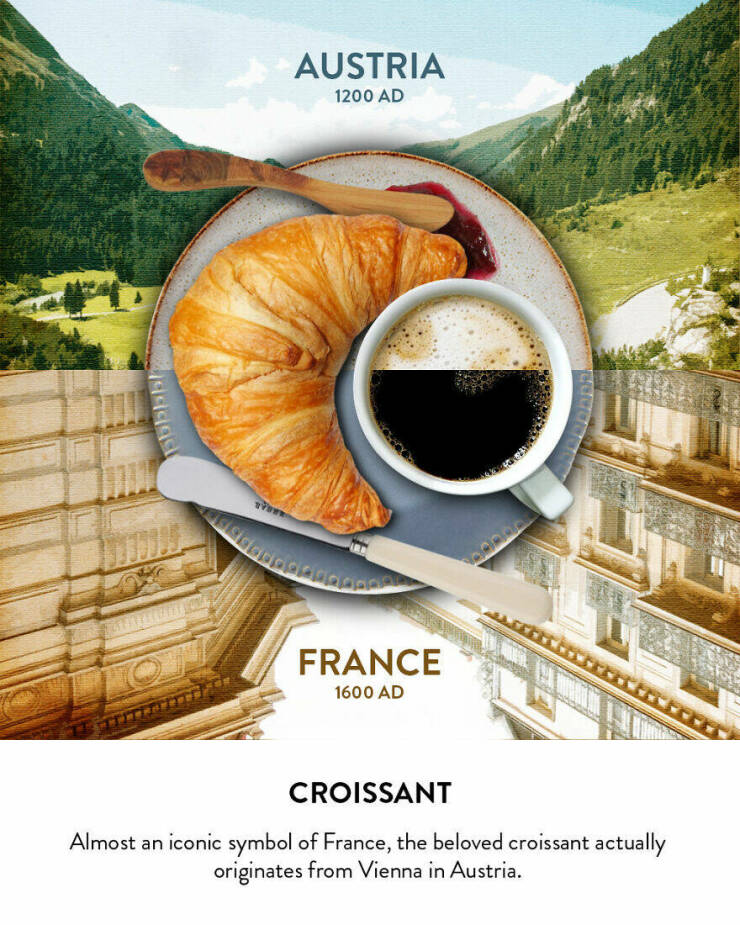 Where we think croissants are from: France.

Where croissants are really from: Austria.

Whether you eat your croissants savory or sweet, the delicious flaky pastry-based breakfast treat that’s so deep-rooted in French culture was actually created in Vienna, Austria.

The Kipfer is noted as being the spiritual ancestor of the croissant and it’s easy to see why. Many historians believe the crescent-shaped treat goes back to the monastery bakeries and was baked as part of pagan customs to celebrate Easter – with the pastry first mentioned in the 12th century. 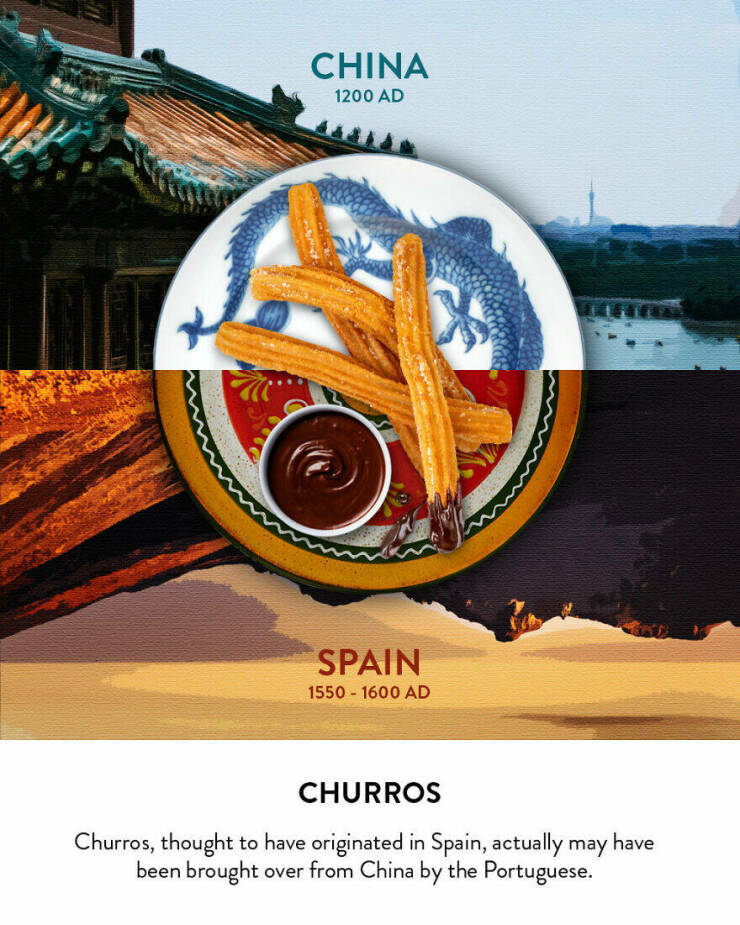 Where we think churros are from: Spain.

Where churros are really from: China.

Is it possible to think of Spanish dessert without thinking of churros? A firm staple of Spanish street food cuisine across the world today, they aren’t actually Spanish at all.

A variant of the Chinese breakfast favorite, youtiao – which are actually slightly salty rather than sweet. The deep-fried strips of dough were brought to Spain via Portugal in the 17th century – where the star shape nozzle was used to pipe the dough into the familiar churros profile and turned into the sugary treat we know today. 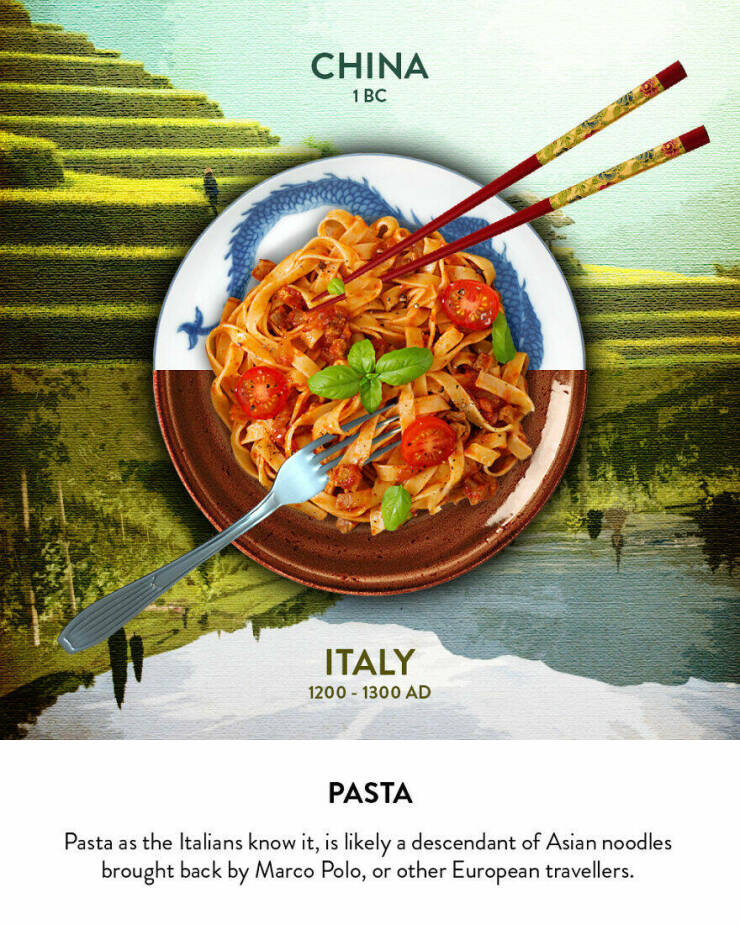 Where we think pasta is from: Italy.

Where pasta is really from: China.

Sorry Italy, you can’t have this one either. It’s said that pasta noodles were gaining popularity in Italy around the 13th century and were most probably introduced by European travelers. Those travelers likely discovered egg noodles thanks to nomadic Arabs who were responsible for bringing early forms of pasta westwards from Asia.

What does set Italian pasta apart from other noodles, though, is the use of durum wheat. Egg noodles had long been a staple part of the Chinese diet, dating right back to the 1st century BC. But the refinement of the process and the addition of durum wheat made pasta noodles affordable, versatile, and when dried, gave it long shelf life, it also tastes great when paired with Mediterranean native foods – firmly rooting it as a cultural staple in Italian cuisine. 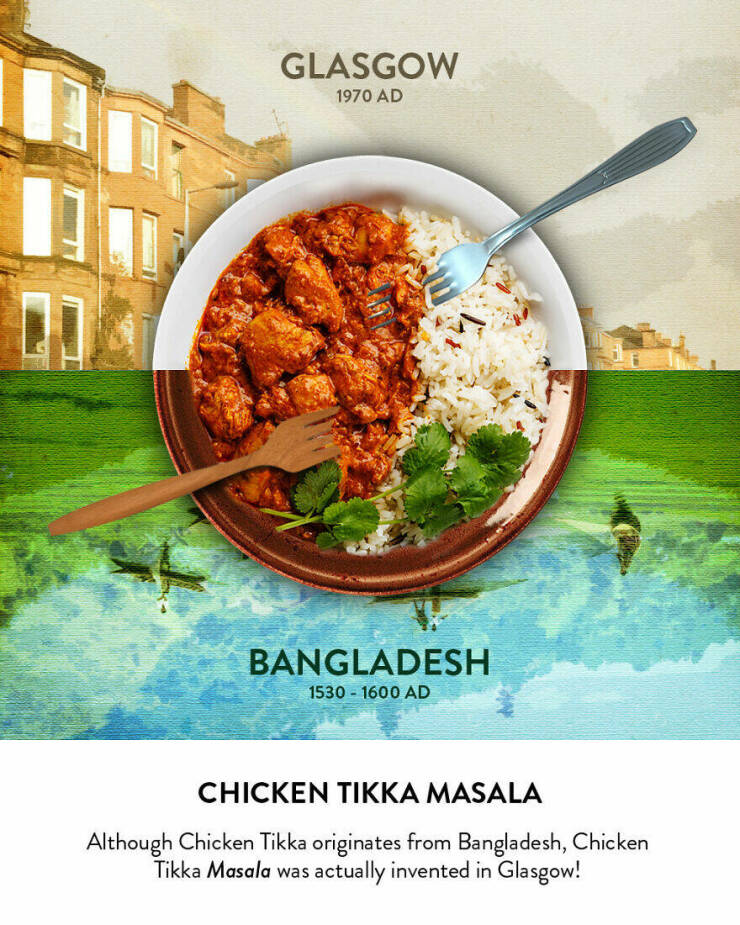 Where we think tikka masala is from: Bangladesh.

Where tikka masala is really from: UK (Glasgow).

It looks like Western Asia and Scotland might have some sort of trade agreement when it comes to food origin misconceptions.

Chicken tikka definitely originated in the Indian subcontinent during the Mughal Empire, becoming popular around the 1600s, which is well-documented. But tikka masala is a different story. Where tikka is usually a dry dish of spice-marinated meat that’s cooked over coals, tikka masala is saucy, rich, and creamy. In the 1970s, an Indian chef was working in Glasgow, and it was there he developed the dish that Westerners have come to consider a solid Indian/Bangladeshi treat. 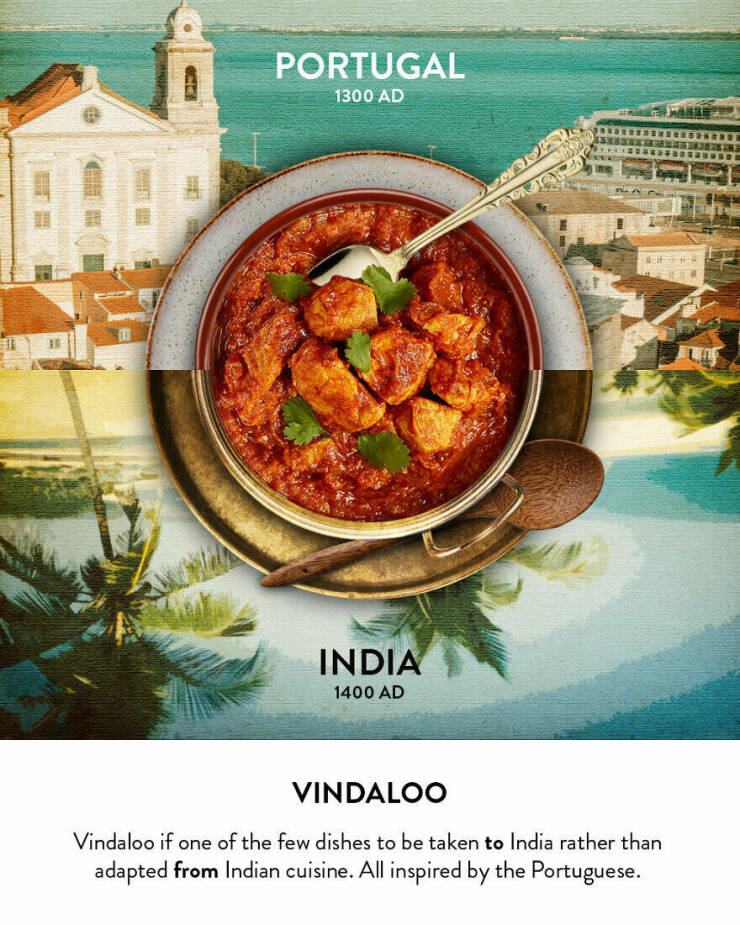 Where we think vindaloo is from: India.

Where vindaloo is really from: Portugal.

While many foods have been taken from India and adapted over time, vindaloo isn’t one of them. Considered an Indian takeaway favorite, it’s said that its very name is actually a garbled pronunciation of the Portuguese dish, Carne de Vinha D’alhos – a meat dish that’s marinated in wine vinegar and garlic.

This meat dish was introduced to the Goa region of India by Portuguese settlers in the 15th century, having been widely eaten in Portugal for centuries before. As wine-vinegar wasn’t a thing in India, locally produced ingredients such as tamarind, black pepper, and cardamom were used instead. Perhaps most importantly, the addition of chili peppers served as a legacy for Portugal’s empire by way of South America. 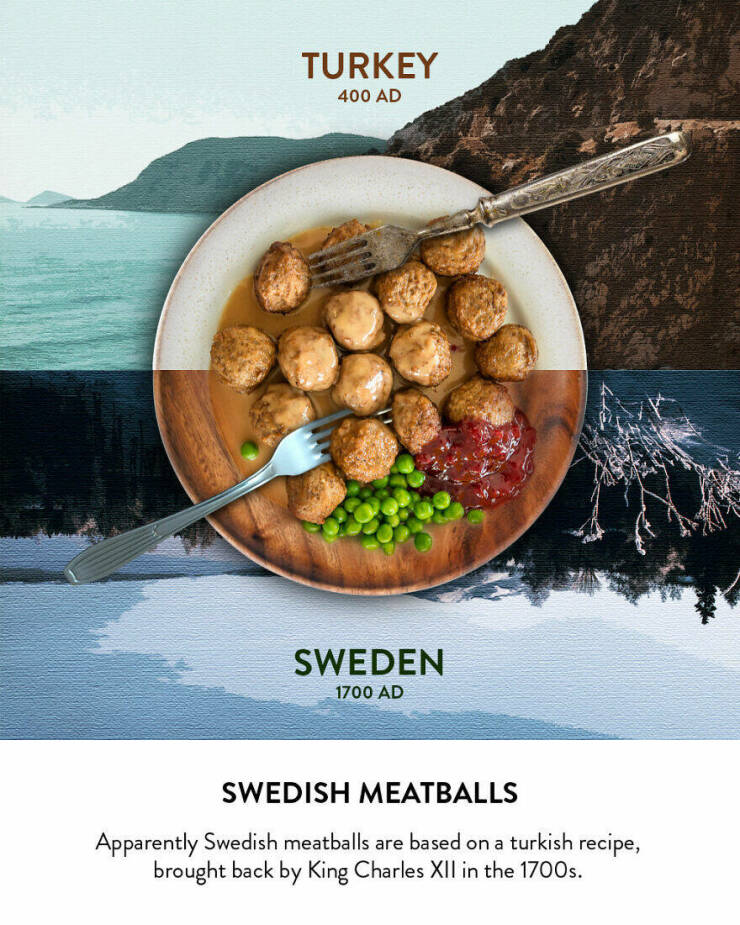 Where we think Swedish meatballs are from: Sweden.

Where Swedish meatballs are really from: Turkey.

Would a trip to IKEA be the same without Swedish meatballs? Based on the name, you could probably consider them one of the Scandinavian country’s most emblematic exports these days – but they actually come from Turkey. Or at least the recipe does. The idea of rolling meat into balls to make it more manageable to eat isn’t unique (China has been doing it for centuries) but it was the Turkish offering that the Swedes loved the most.

The Turkish recipe is said to have been brought to Scandinavia in the 18th century by King Charles XII. Known as köfte, Turkish meatballs are made using beef and lamb with common ingredients such as onions, eggs, parsley, panko, breadcrumbs, and salt for taste – Swedish meatballs these days are usually pork-based. 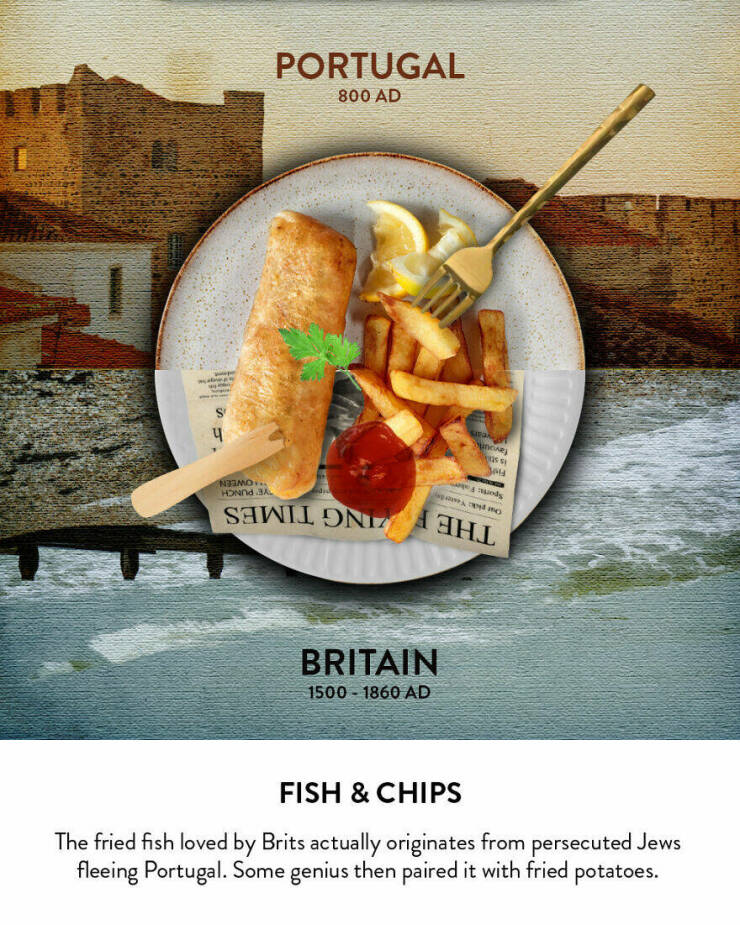 Where we think fish & chips are from: The UK.

Where fish & chips are really from: Portugal.

If there’s one thing the British coastline is famous for, it’s fish and chips. You’d be hard-pushed to find a seaside town that doesn’t have at least one chip shop. Fish and chips have become such a British staple in fact, that during World War II, Winston Churchill exempted the dish from rationing. But it might be surprising to hear that fish and chips aren’t British at all, but Portuguese.

It’s said that the Sephardic Jews of Portugal bought a centuries-old Andalusian dish called peshkado frito to the UK in the 1400s when fleeing religious persecution. Whitefish would be fried in a thin coat of flour ready for the Sabbath and when the potato became popular in the 1800s, they made the perfect accompaniment… Now you know where “fish and chip Friday” comes from! 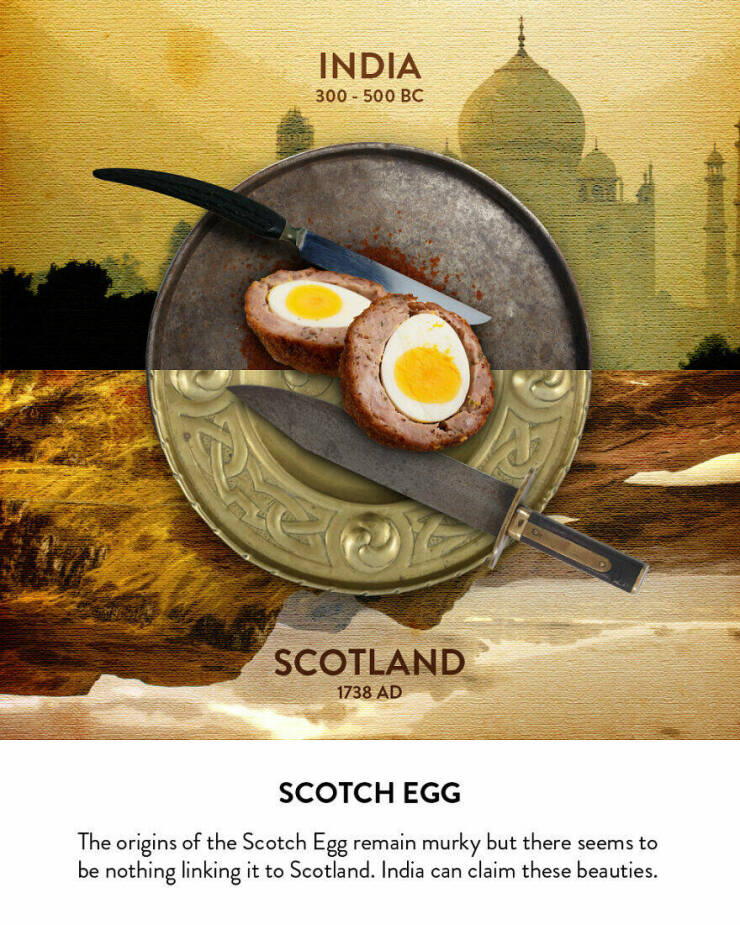 Where we think scotch eggs are from: UK (Scotland).

Where scotch eggs are really from: India.

It’s unclear how these meaty, eggy beauties came to fly the Scottish flag, but they seem to be doing so with a bit of a secret… they’re not really Scottish at all.

It’s thought that this picnic favorite was heavily inspired by the dish Nargisi kofta, which was first mentioned in Indian culture around 500 BC. Nargisi kofta is made up of a hard-boiled egg that’s encased in spiced kofta meat, which is then fried (sound familiar?). It’s likely the British encountered Nargisi kofta whilst traveling through India centuries later.

The London department store Fortnum & Mason claims to be the creators of the Scotch egg as we know it today, marketing it as a travelers’ snack in the early part of the 18th century. And while they may not have “invented” them, they certainly popularised them. How they came to get their name is often disputed, though. One theory is that they were named after the Scots Guards stationed at a local army barracks where they developed a taste for the snack.