10 Weird Myths About The Middle Ages

Myth #10: All the streets were extremely dirty and people would go years without bathing. 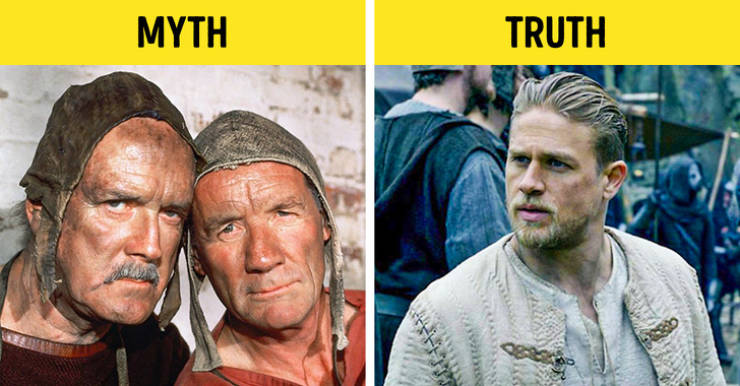 Believe it or not, soap was actually invented in the “dirty” Middle Ages. In big cities, there were a lot of soap makers. Poor people used to visit public bathhouses that were located near pilgrimage sites.

The aristocracy used to turn hygienic procedures into shows. They covered wooden baths with silk and used to talk, drink wine, and play chess while washing. Clean clothes indicated that a person was noble and that their intentions were as clean as their clothing.

You may want to ask, “What about Louis XIV who only washed himself twice in his life only due to his doctor’s advice?” First of all, the Sun King died in the 18th century. During this time known as the Age of Enlightenment, people didn’t care about their hygiene and used to wash their faces, hands, and necks exclusively. Baths became popular at the end of the 19th century. Now you know not to confuse the Middle Ages with the Age of Enlightenment.

Myth #9: There was no medicine available in the Middle Ages. 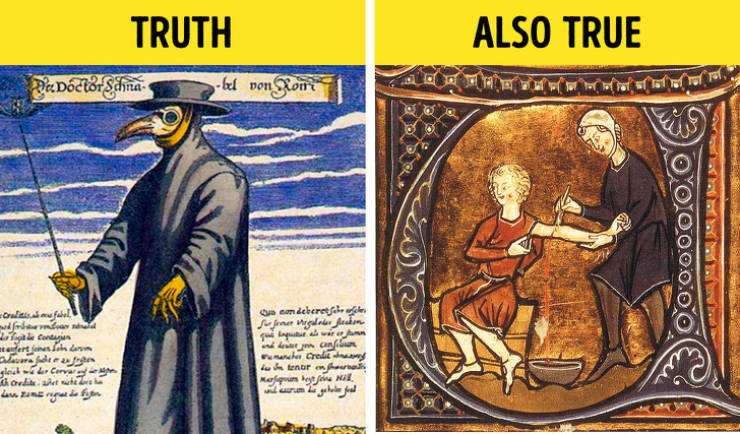 We’ve heard a lot of surprising things about medieval medicine like that doctors used to cure all diseases with bloodletting and praying, people didn’t turn to doctors and preferred to ask God for help, and only monks and plague doctors used to treat sick people. But are any of these myths true?

In the 13th century, doctors started using anesthesia during surgeries, learned to suture wounds and perform autopsies, and even invented the concept of quarantine. See, the Middle Ages weren’t just about bloodletting!

Myth #8: Only monks were educated. 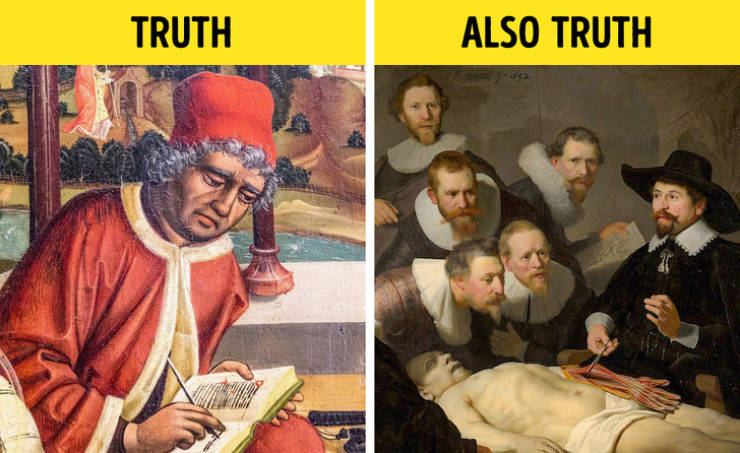 Most schools were located near monasteries, but it doesn’t mean that only monks had the opportunity to study. Bishops, priests, and deacons had to be educated to conduct church services. Young noble people were sent to monasteries to get an education or their parents hired teachers for a home-based education.

In the 11th century, schools for all people regardless of their nationality, origin, and religion were established. The 7 liberal arts consisting of grammar, rhetoric, dialectic, arithmetic, geometry, astronomy, and music were mandatory for studying. Medicine, theology, and law were optional. In the 12th and 13th centuries, the first universities appeared and education was taught in Latin there. There were only 3 fields of study: medicine, theology, and law.

Myth #7: The Middle Ages are a dull epoch and aren’t connected to any scientific discoveries. 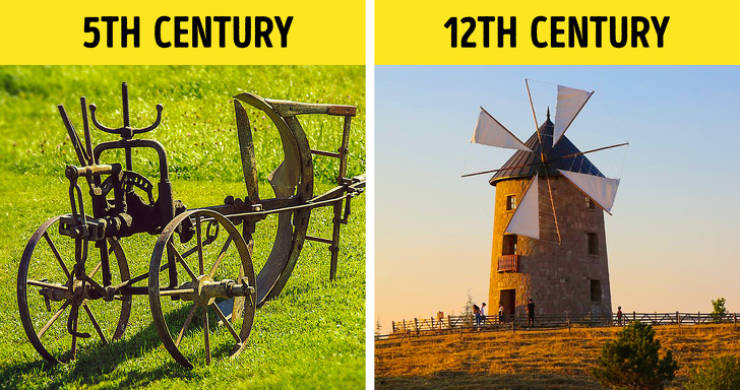 The Church didn’t fight against scientists or burn them at the stake. The idea of opposing religious ideas belonged to philosopher John William Draper in the 19th century. His theory became popular but was criticized and called a historical hoax. The Church could punish a person (like those in the military, peasants, ordinary citizens, and even monks) for heresy, the retreat from religious teachings.

People depended on agriculture and to make their lives easier, the horseshoe, plow, yoke, and windmill were all invented. Windmills were used for the production of leather items. A blast furnace and new methods of metal processing also appeared.

Horizontal looms and distaffs allowed people to produce large amounts of fabric. It was at this time that buttons were invented and became an important fashion accessory. In their everyday lives, people used mechanical watches, glasses, and mirrors. Printing and the first printing presses also started to appear. The invention of both the compass and the ship wheel let sailors make new discoveries as well.

Myth #6: Giordano Bruno was burned because he was a scientist and proved that the earth was round. 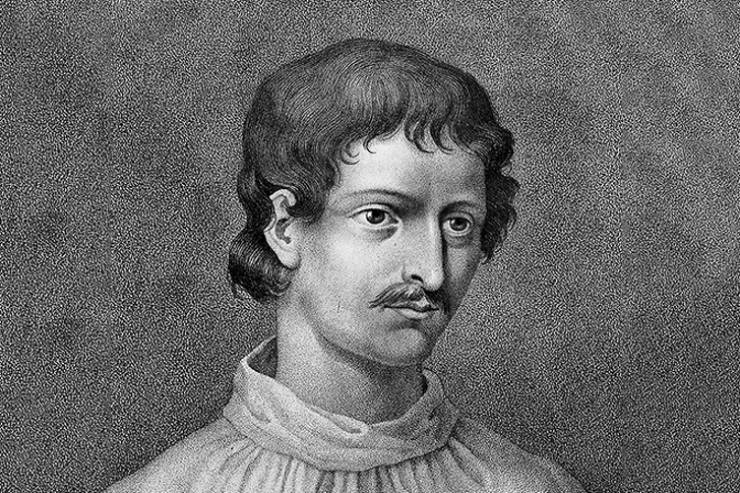 “And what about Giordano Bruno? He was burned at the stake because of his scientific discoveries,” you probably want to say. But this is just a myth we were told back in grade school.

Giordano Bruno was a monk who actually lived during the Renaissance, not the Middle Ages. He suggested that the universe was infinite, that stars were far away from the sun, and that there were many celestial bodies outside the solar system.

Once, he had an argument with Venetian nobleman, Giovanni Mocenigo. Mocenigo was offended and wrote several denunciations. He claimed Giordano Bruno told people that monks were donkeys, the Virgin Mary wasn’t the mother of Jesus, and Jesus was a wizard, working fake miracles. Bruno was then arrested and spent 6 years in prison. In 1600, he was burned at the stake as a heretic. In the indictment, there’s not a single word saying Bruno was executed for his scientific work.

Myth #5: Armor was so heavy, knights were lifted onto horses with rope. 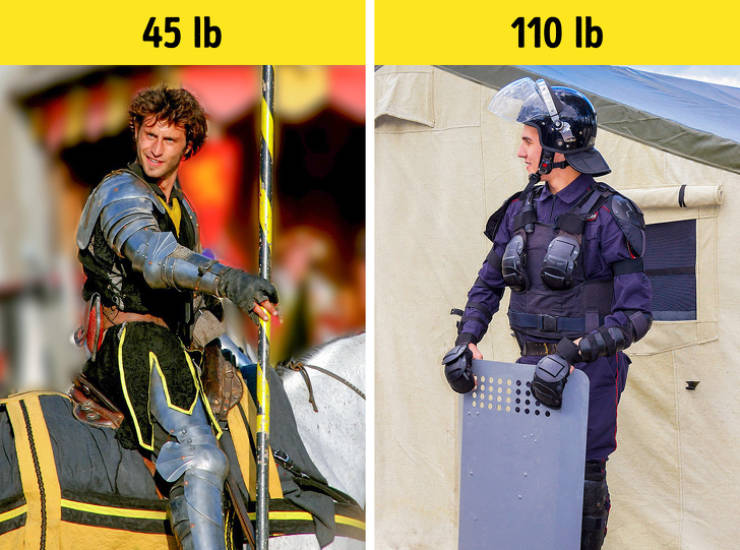 Believing that armor was so heavy, knights couldn’t move is a rather common myth. But who’d send a clumsy knight who couldn’t move properly during a fight?

Medieval knights’ outfits weighed around 45 lb which is 2 times lighter than a modern-day firefighter’s uniform. People who’ve engaged in historical reconstruction can walk and perform acrobatic tricks wearing armor without any help. 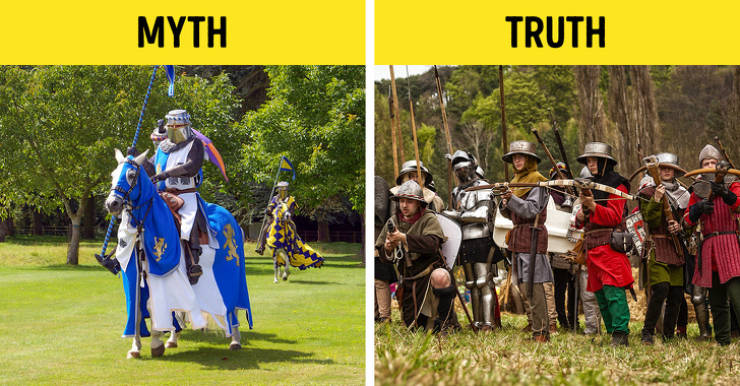 Tournaments were invented in the 5th century to improve knights’ skills and were a kind of sports competition. Medieval etiquette had a great impact on the nature of medieval wars, so there were tournaments instead of bloody battles.

Since the 14th century, tournaments started looking the way we know them now. They were conducted on special occasions like the return of a feudal lord from war or a crusade, wedding, birth of an heir, the signing of an important document, and so on. Only noblemen who could afford to buy special armor themselves were allowed to participate. Tournaments were traumatic and even fatal: in 1175, 17 knights died in Germany, and in 1240, more than 60 people died in Neuss. As you can see, knights didn’t fight for a lady’s handkerchief.

Myth #3: Joan of Arc was burned at the stake because she was considered to be a witch. 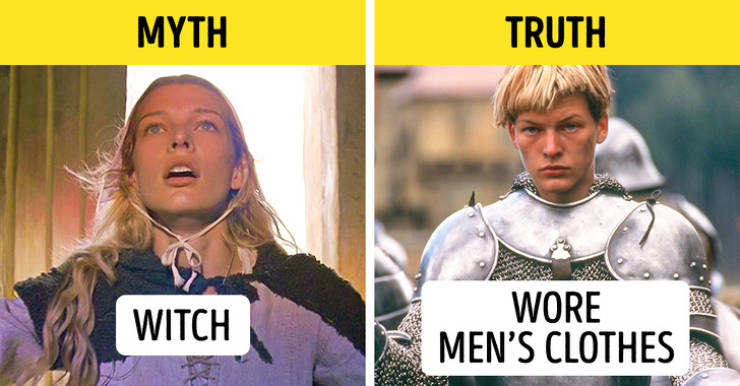 This famous woman who participated in the Hundred Years’ War played an important role in Europe’s history. Joan was known as God’s messenger and was a kind of a symbol who inspired people and made them believe in their victory. The girl was only 19 when she was caught by the Burgundians. The King refused to redeem her despite her merits, so the Maid of Orléans was sold to Englishmen for 10,000 gold coins.

She was declared a heretic because she wore men’s clothes. Joan was encouraged to confess she was guilty in exchange for life imprisonment and she agreed. After a few days, under the pretext that she put men’s pants on again, she was sentenced to death by being burned at the stake.

Myth #2: Spices were used to hide the taste of spoiled meat. 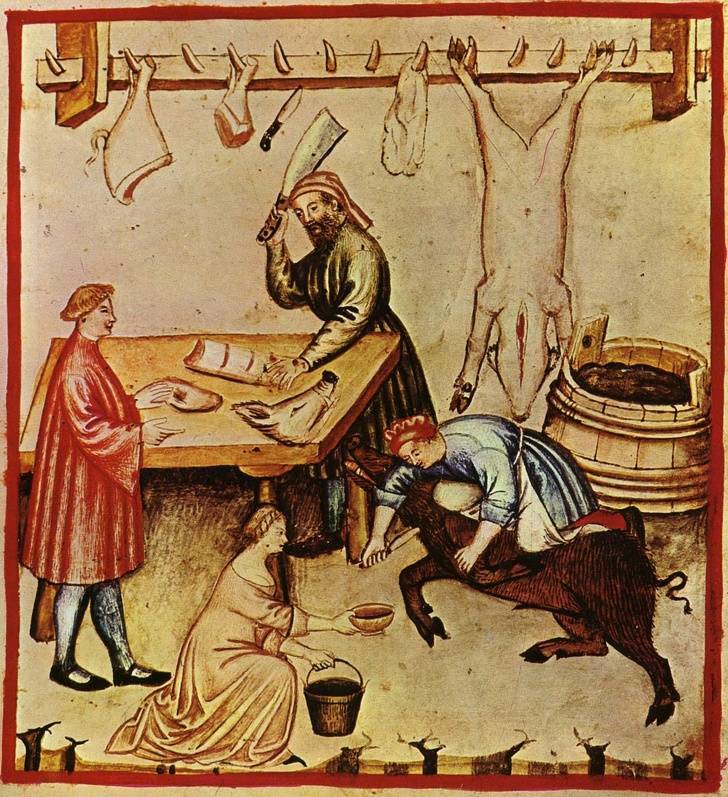 Spices were really popular in the Middle Ages. They were brought from Africa and Asia and were used not only in cooking but in medicine as well. 1 pound of nutmeg could be exchanged for a cow. And to pay a fine, spices were used instead of money.

People who could afford a few pounds of pepper or saffron didn’t eat spoiled meat. The widespread use of spices and seasonings were merely a trendy phenomenon.

Myth #1: The iron maiden was a popular tool for torture. 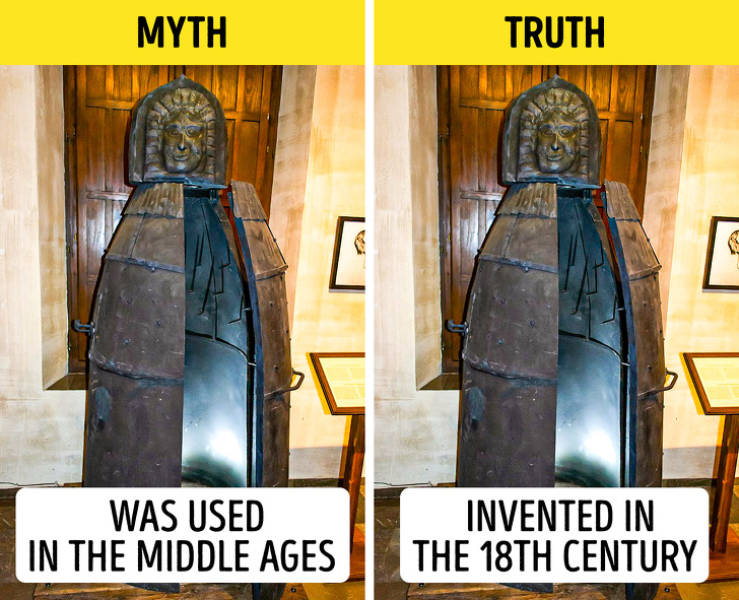 There are probably no films about the Middle Ages without the appearance of an iron maiden. A wooden sarcophagus with long sharp thorns could make anyone speak the truth. This iconic tool even gave the name to the famous rock band, Iron Maiden. But there’s just one issue here — the iron maiden was invented at the end of the 18th century and there’s no information proving it was used for torture. Most likely, it was a brilliant historical hoax.