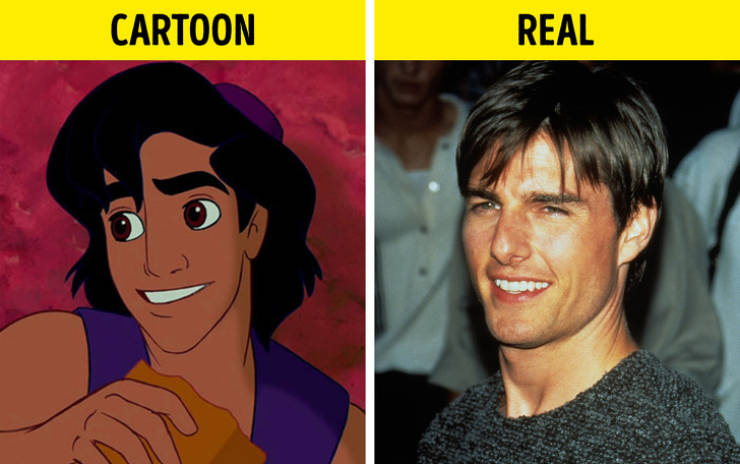 Disney’s Aladdin was designed by the team of Glen Keane. Initially, the hero was supposed to be thirteen and originally resembled the actor Michael J. Fox.

During production, the team decided that the design was too boyish and didn’t appeal enough to the audience. So he was aged a bit to be 18 and redesigned with actor Tom Cruise and some Calvin Klein models in mind. 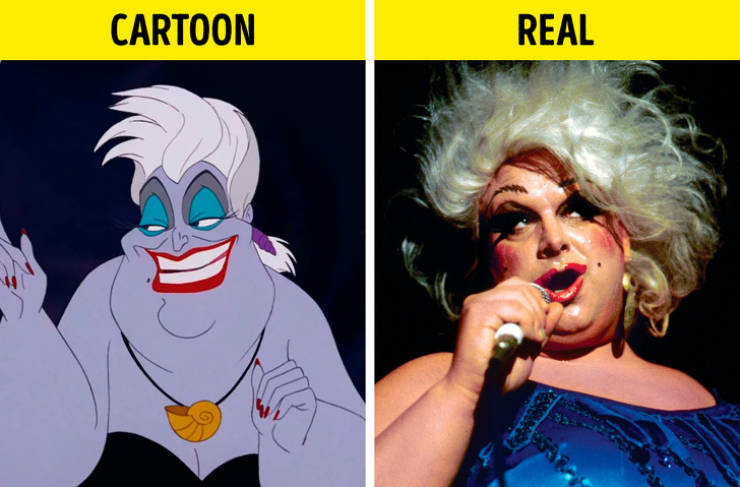 Ursula is an unforgettable Disney character from The Little Mermaid. She was created by director Ron Clements and screenwriter John Musker.

But we’re sure that hardly anyone knows that Ursula’s appearance was inspired by the American actor and drag queen, Divine. We can definitely see what they have in common and it’s not just their appearance, but also their facial expressions. 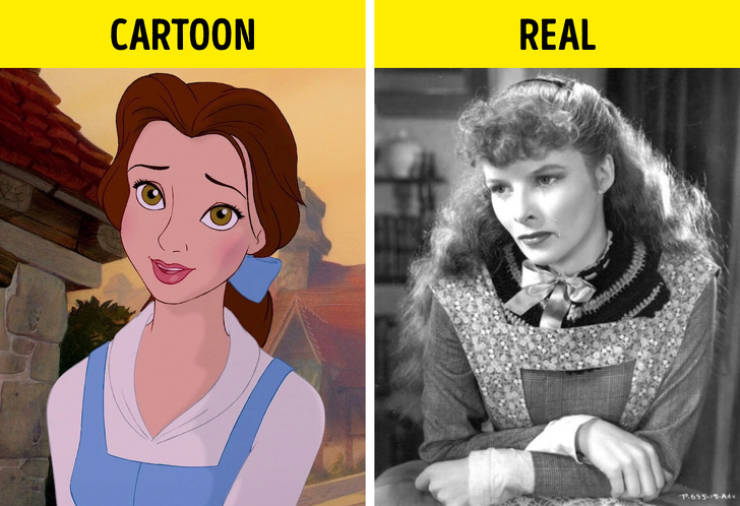 Despite the fact that Disney wanted Beauty and the Beast to resemble an old-fashioned film, the filmmakers wanted Belle to look like “a woman that was ahead of her time.” Inspired by the women’s rights movement, screenwriter Linda Woolverton decided to avoid creating another “insipid” Disney princess and wanted to portray Belle as a headstrong feminist.

Woolverton refused to watch the old adaptation of the fairy tale and chose to base Belle on American actress Katharine Hepburn, who played Jo March in the film Little Women. 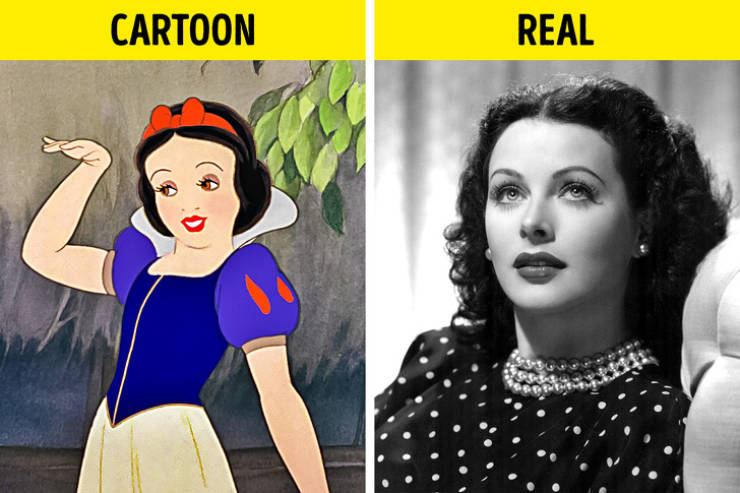 Disney’s Snow White was inspired by 3 girls: Hedy Lamarr, Marge Champion, and Adriana Caselotti. Hedy Lamarr was an Austrian actress who became known for a scandalous nude scene in the movie Ecstasy.

Marge Champion was a famous dancer, who is going to be 100 years old soon and the voice of Snow White was the voice of Adriana Caselotti. 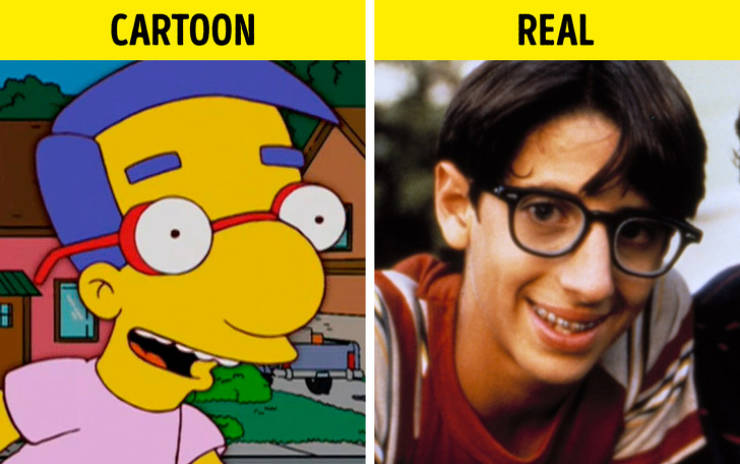 There are so many things in common between The Simpsons’ character Milhouse and Josh Saviano who became famous because of his role in The Wonder Years. It’s no wonder that Milhouse Van Houten is considered to be a character based on Saviano. Nowadays Josh Saviano is an American lawyer. 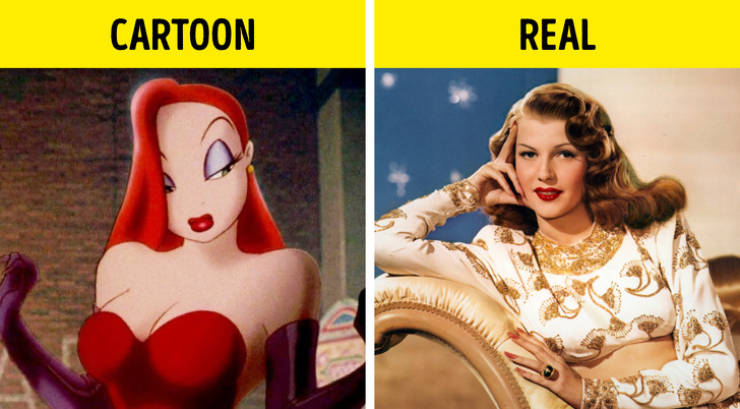 The film version of Jessica Rabbit was inspired by various actresses, but animator Richard Williams explained later that he had tried to make her like Rita Hayworth. Also, they took hair inspiration from Veronica Lake. 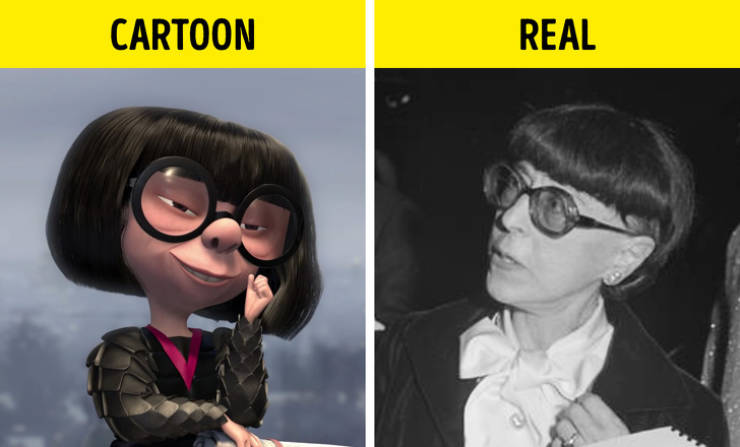 Edna Mode from The Incredibles is widely believed to have been based on costume designer Edith Head. However, there are constant speculations that Vogue editor-in-chief Anna Wintour and actress Linda Hunt were also an inspiration for Edna. 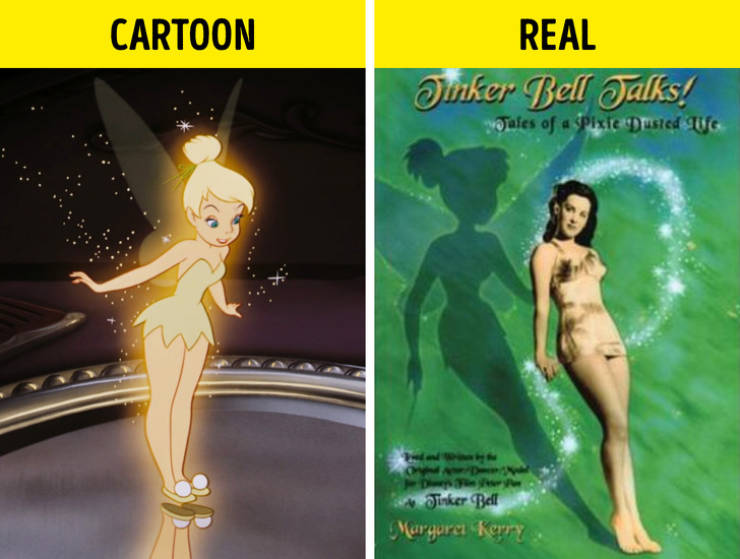 There is a myth that the original animated version of Tinker Bell was modeled after Marilyn Monroe. This probably came about because of the blond hair of the character.

However, Disney animator Marc Davis named Margaret Kerry as his inspiration. Kerry is an American actress and radio host. In 2006 she published her autobiography Tinker Bell Talks: Tales of a Pixie Dusted Life. 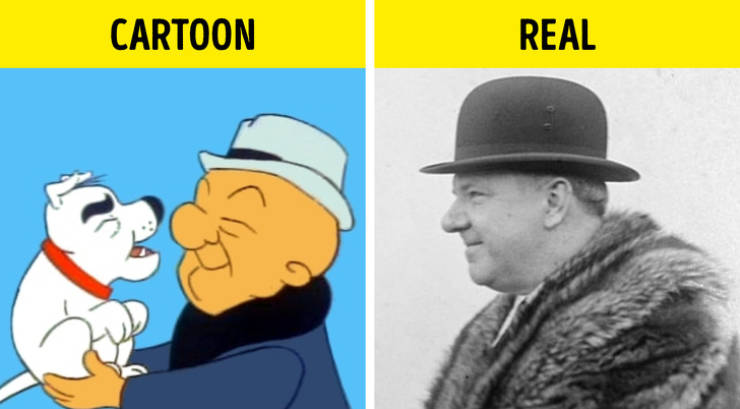 Mr. Magoo was created in 1949 and his first appearance was in the short cartoon The Ragtime Bear, scripted by Millard Kaufman. His creation was a collaboration of ideas.

Animation director John Hubley partly based the character on his uncle Harry Woodruff and W. C. Fields, who was a famous American comedian. We definitely see the many features they have in common.

The vultures from The Jungle Book and The Beatles 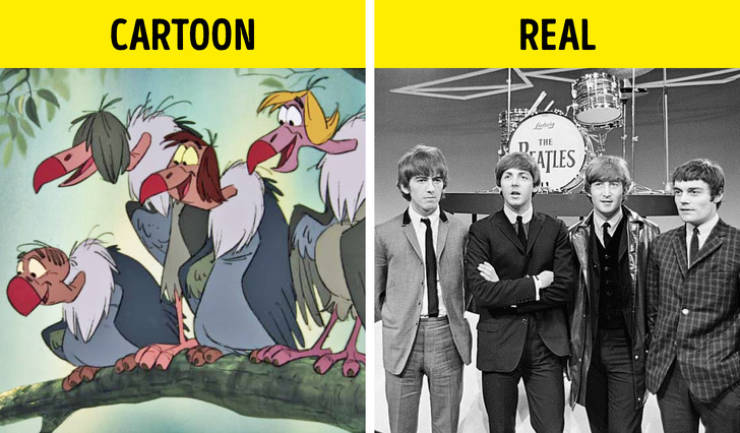 The vultures from The Jungle Book were designed based on The Beatles. You can recognize the same moptop haircuts and mock-Liverpool accents. The characters were also planned to be voiced by the band, but this did not come true because of problems with their schedule.

Bonus: The Metro Goldwyn Mayer logo and Leo the Lion 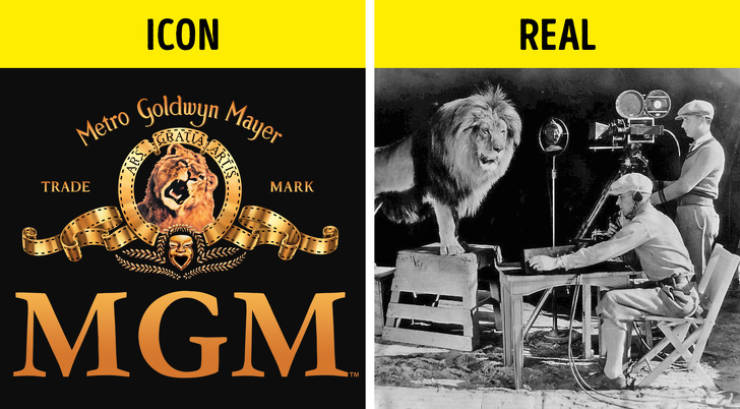 Leo the Lion is the iconic mascot for the Hollywood film studio Metro-Goldwyn-Mayer. Since 1916 there have been 7 different lions used for the MGM logo: Slats, Jackie, Telly, Coffee, Tanner, George, and Leo.