12 Most Mysterious Coincidences In The World 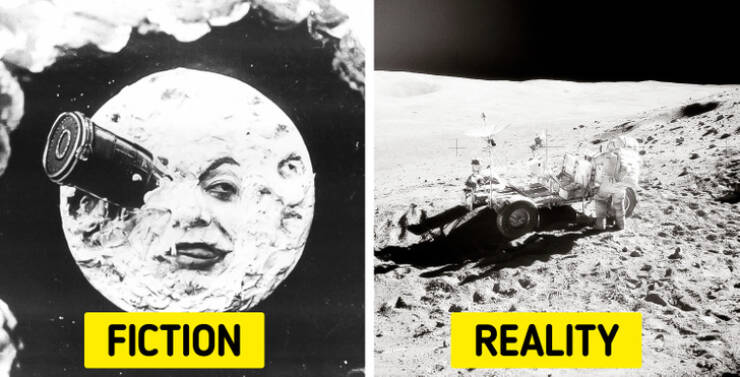 One of Jules Verne’s most recognized works, From the Earth to the Moon, which was published in 1865, is about a cannon called “Columbiad,” which fires a human-crewed projectile aimed at Selene. Interestingly, 104 years later, the Apollo XI spacecraft module that completed the mission to the Moon was named “Columbia.”

The name Columbia was first suggested to Michael Collins by Julian Scheer, one of NASA’s public affairs assistants. He mentioned the name offhandedly in a telephone conversation, saying, “Some of us up here have been kicking around Columbia.” Although the name initially seemed a bit “over the top” to Collins, he eventually named the module that because he couldn’t think of a better choice. Besides, his crewmates Buzz Aldrin and Neil Armstrong had no other suggestions. Then, Collins realized the similarity of the name to Columbiad, the cannon invented by Verne. 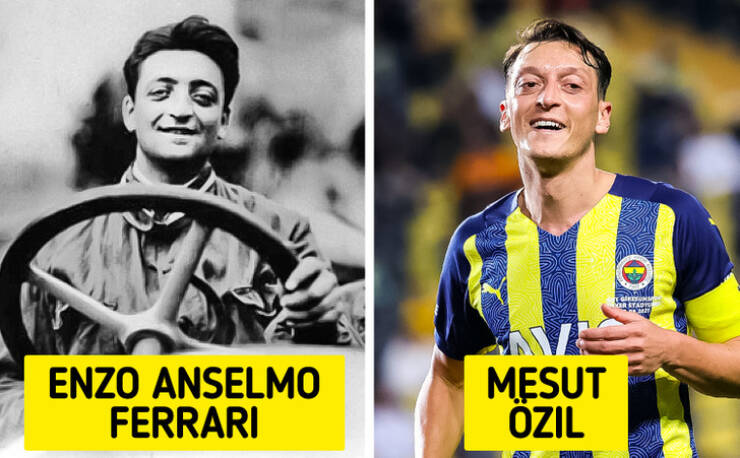 The famous driver Enzo Anselmo Ferrari, founder of the Scuderia Ferrari Grand Prix racing team and later of the Ferrari brand, died on August 14, 1988, after having devoted his entire life to automobiles.

Two months later, on October 15, Mesut Özil was born in Germany. He is a soccer midfielder and could pass as Ferrari’s identical twin. The resemblance is extraordinary and, moreover, the coincidence of the dates is very striking.

The history of the Titanic written in a novel 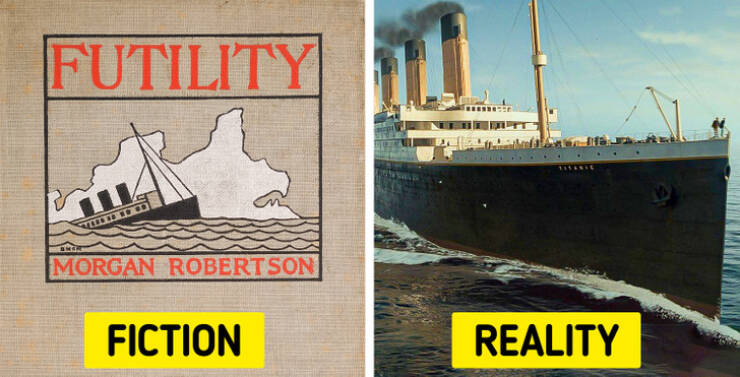 The sinking of the Titanic was a historical event that shocked humankind. It was impossible to predict or even imagine, since it had been advertised as unsinkable.

However, several years earlier, in 1898, the writer Morgan Robertson published a novel called Futility. It narrated the shipwreck that occurred after the sinking of an ocean liner called “Titan,” which collided with an iceberg. The similarities were striking. 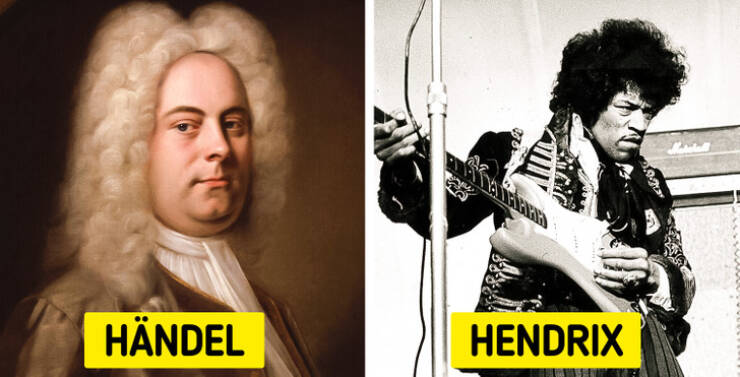 The composer Georg Friedrich Händel, one of the musical geniuses of the 17th and 18th centuries, lived at number 25 Brook Street in London’s Mayfair district. In that same street, at number 23, lived another musical genius of the 20th century, Jimi Hendrix.

One lived there until 1759; the other in the late 1960s. Besides this, the sound of their surnames is very similar. Today the house is a museum. 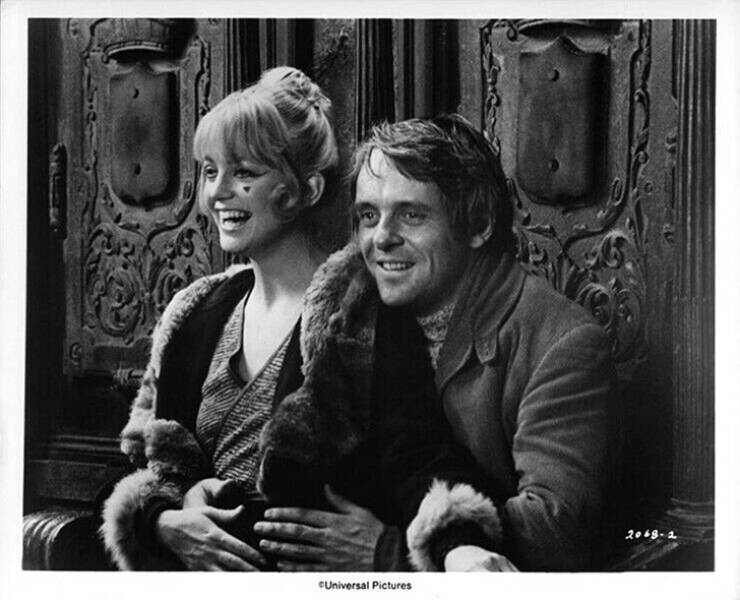 Before becoming a major Hollywood actor, Anthony Hopkins was offered a role in The Girl from Petrovka. Committed to his work, he searched for a copy of the original novel, written by George Feifer, so that he could play the character more faithfully. To the actor’s surprise, he could not find a copy of the book anywhere.

However, on one occasion, while walking in London, he saw an abandoned book on a park bench, and, of all the books lost in the world, it was precisely The Girl from Petrovka. But the anecdote does not end there because the actor met George Feifer himself during the filming. The writer commented that he did not have a copy of his own book, as he had once lent it to a friend who had lost it in London. So Hopkins took out his copy and showed it to him: of course, it was the same one. 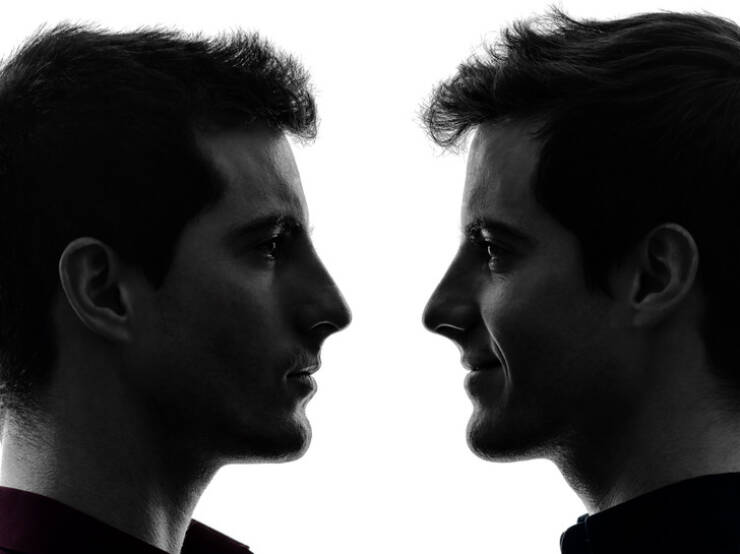 In 1979, 39-year-old twins were reunited after being separated at 3 weeks of age. But their reunion was full of surprises: both were named Jim (names given to them by their foster parents), both loved math and carpentry, and both worked in security.

But even more curious was that their first wives were both named Linda. They had divorced and remarried women named Betty. Their sons were named James Allan and James Alan.

The curious case of Eleanor Rigby 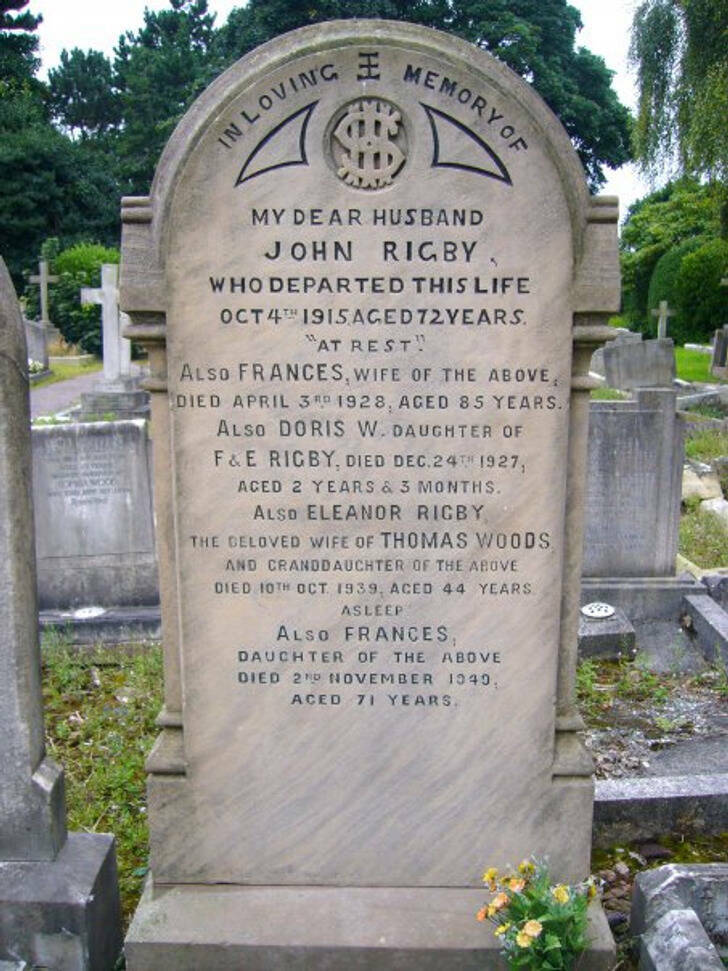 John Lennon and Paul McCartney met at St. Peter’s Church in Woolton in 1957. This friendship changed the history of music, as they would later form The Beatles. Surprisingly, in the same place where they met, a few meters away, was the grave of a woman named Eleanor Rigby.

It was 9 years later when Paul McCartney wrote “Eleanor Rigby.” According to the data, the musician named his character after the actress Eleanor Bron and a Bristol store called Rigby & Evens Ltd. He later said that perhaps the grave had something to do with the name of his song, although not directly. 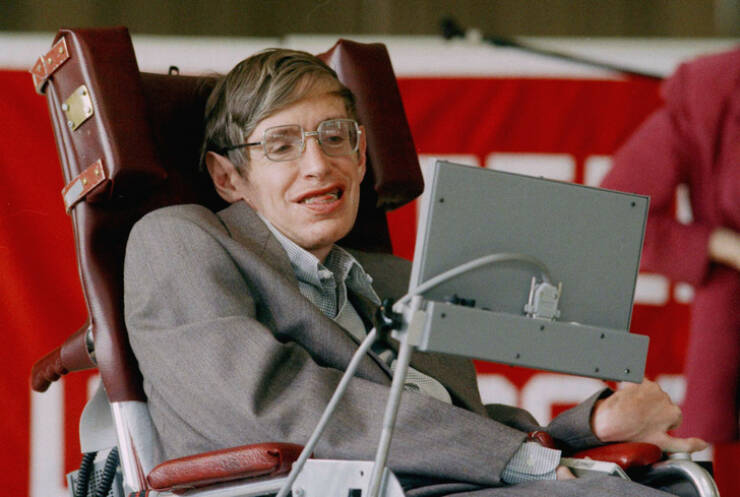 We know that time is relative and that coincidences exist, and Stephen Hawking’s death comes to prove that. It occurred on March 14, which is a very significant day because it coincides with Einstein’s 139th birthday and the day on which Pi is celebrated.

The fate of a stewardess 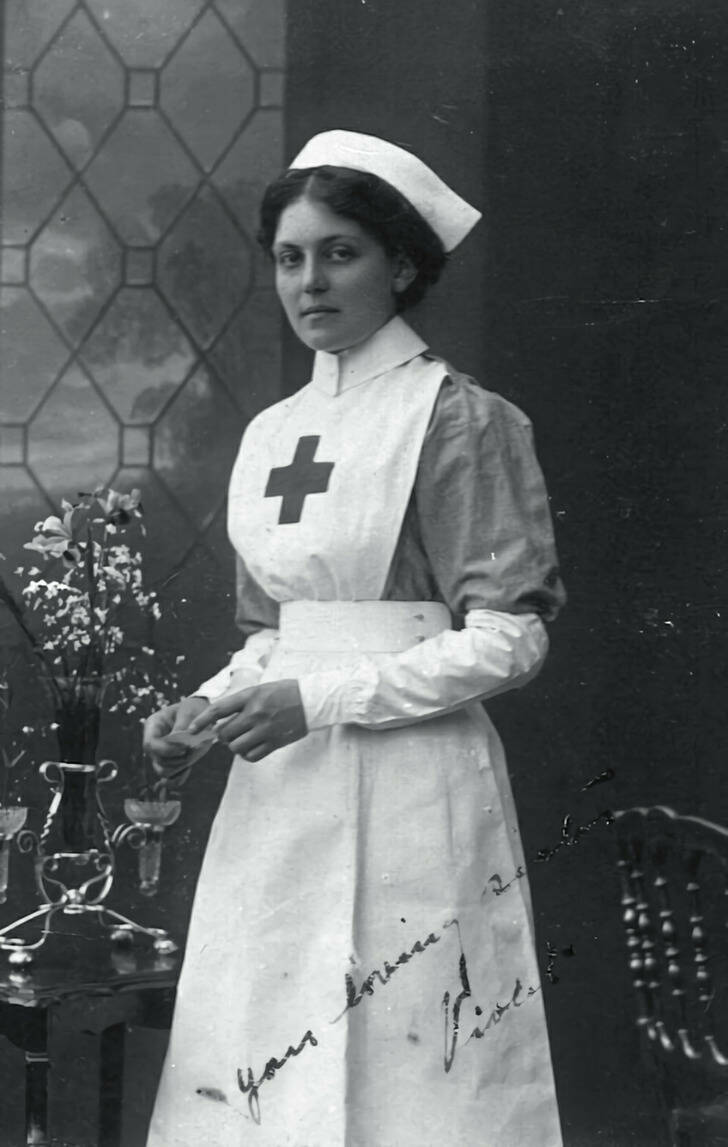 Some people are lucky in the most mysterious ways. Young nurse Violet Jessop began working as a stewardess on the Olympic when it collided with another ship. Fortunately, there were no fatalities at the time and, despite the damage, the ship was able to return to port without sinking.

But a year later, Jessop was transferred to the Titanic, which struck an iceberg in 1912. She survived by boarding lifeboat 16 and was asked to take care of a baby. But life put her to another test when she boarded the Britannic and there was an unexpected explosion, and she survived again. In fact, she died at the age of 83 from heart disease. 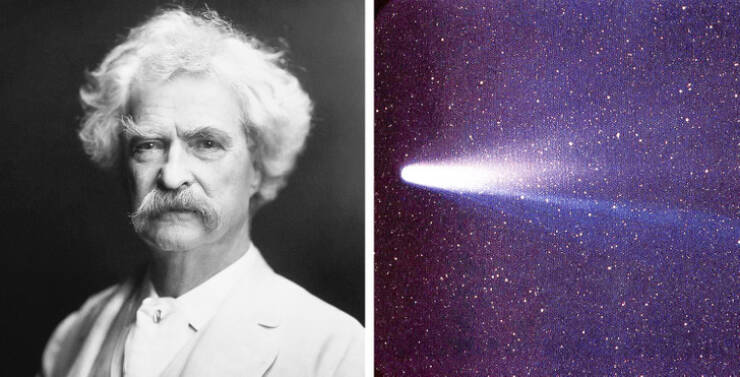 Every 76 years, Halley’s comet passes by the Earth and can be seen in the sky. In 1835, one of the years in which this phenomenon occurred, Mark Twain was born. Moreover, the writer predicted that his death would occur in the same year when the comet passed by again.

“The Almighty has said, no doubt, ’Now here are these two unaccountable freaks; they came in together, they must go out together,’” he said. Most surprisingly, he was not wrong, he died a day after the comet reached its closest point to Earth.

The woman who was photographed twice by Google Maps 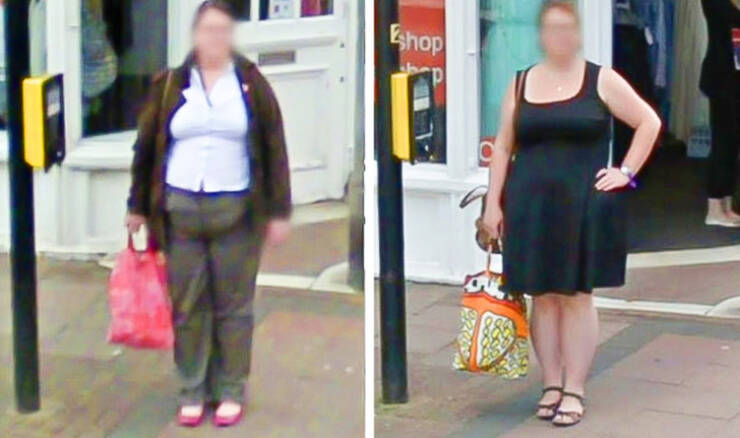 Google Maps is becoming increasingly popular, and it predicts more and more eventualities that could occur on the road. And although we already know of some remarkable images that the application has given us, undoubtedly the one of Leanne Cartwright stands out.

The so-called “time traveler” has been captured in the same place, with the same pose and carrying a bag 10 years apart. However, she didn’t know it until her husband searched for the first image and, then, found the second one.

Mexico and its earthquakes 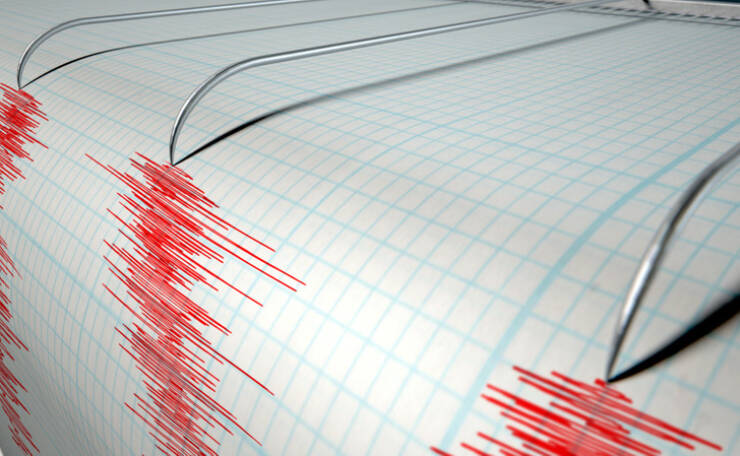 Mexico is a country famous for its traditions, magic, and folklore. But in the last 100 years, there have been earthquakes that go beyond scientific explanation. On September 19, 1985, Mexico City woke up to one of the strongest earthquakes ever. Since then, nothing has been the same, and every year, a drill is carried out to avoid catastrophes.

What is interesting is that in 2017 and 2022, a few minutes after conducting the drills, there have been earthquakes, both higher than 7 on the Richter scale, which makes them very dangerous. Undoubtedly, September 19 is a date difficult to forget for Mexicans.