The 15 Creepiest And Most Terrifying Places On Earth

If you’re looking for a few terrifying scares, these creepy locations are the perfect vacation spots for you.

Jacob’s Well, Texas. Jacob’s well is a 12-foot wide perennial spring, just outside of Wimberly, Texas. The well’s one of the creepiest places on earth, pretty much because it goes down 30 feet then levels off into an expansive underwater tunnel system that stretches for miles. So far, at least 8 divers have died in the system trying to map and explore the caves. Imagine swimming in complete darkness, with your oxygen running low, you’re lost and confused and all you need is an air bubble to regain your composure, but there’s nowhere to stop and breathe. That’s my nightmare, right there. 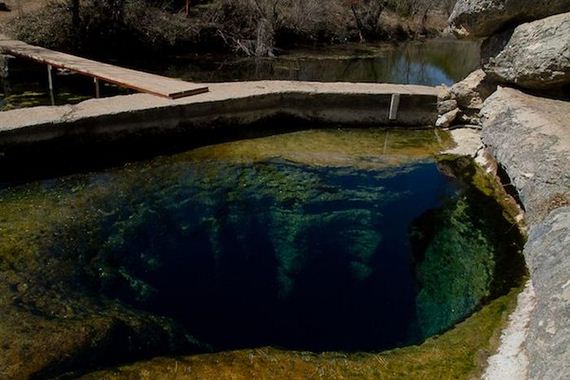 The Killing Fields, Cambodia. During the end of the Cambodian Civil War precipitated by the Khmer Rouge regime between 1975 and 1979, close to 1.7 million and 2 million people were the subject of genocide by dictator Pol Pot. There are thousands of these sites all over the country, where you can still find human bones sticking out the dirt paths, with a whole host of various injuries that they sustained in their execution. 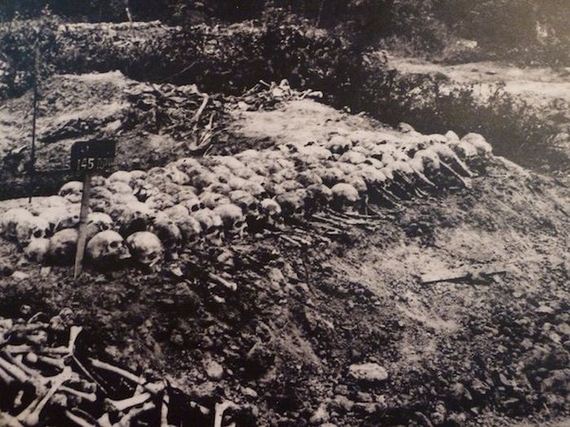 Poveglia Island, Italy. We’ve written about this one before, but this island off the coast of Venice is the most haunted place in Italy. Over its years, it’s been a plague victim dumping ground, a graveyard and a mental hospital where strange experiments are conducted. Its rumoured that the mad doctor in charge of the experiments was pushed off the bell tower by unseen hands and suffocated by a fog after surviving his fall. The island’s been left to rot since 1968, and no one is permitted to visit. 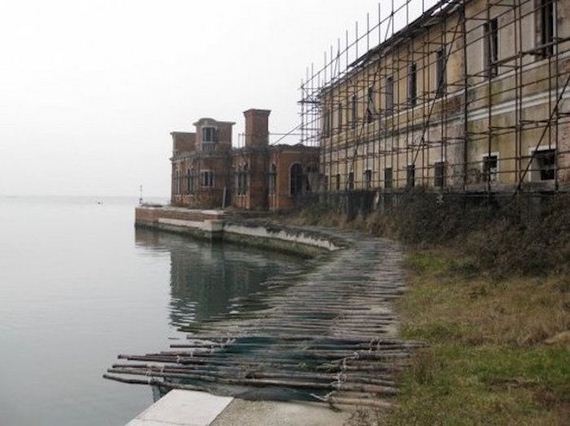 Death Zone, Mt. Everest, Nepal. This is a pretty depressing name for the highest altitudes of Mt. Everest. Anything above 8,000 metres (of the total 8,848m height), is where the oxygen becomes so thin that you can’t breathe without oxygen. At this point, between the lack of oxygen, exhaustion, extreme cold and various climbing hazards, mean that the majority of the 200+ lives that Mt. Everest has claimed, have been here. Since rescuing or carrying an injured climate back to basecamp is impractical, they’re typically left there to die. So far, about 150 corpses are unrecovered and it’s not crazy to find corpses alongside the standard climbing routes, frozen in their last moments, trying to make it back down. 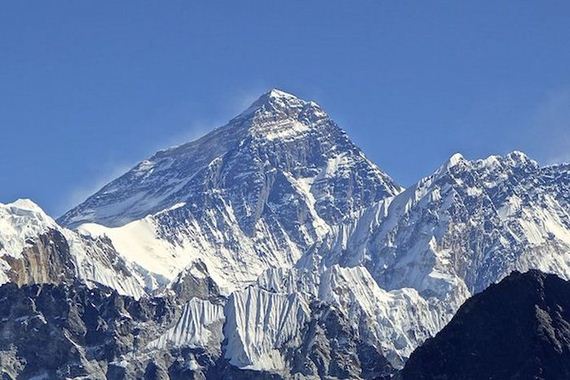 Paris Catacombs, France. Since the 13th century, the ground beneath Paris has been mined for limestone and other minerals, so the entire ground that the city sits on is a labyrinth of tunnels. A little over half of those tunnels are mapped, while the rest are left to speculation. Back in 1800’s, the graveyards of Paris were getting so full, that they had to start transferring the bones to the tunnels, and arranged them in a Gothic display. This ossuary (where the bones are kept) are open to the public for you to check out and even touch, if you wanted to. If that’s your thing. We won’t judge. 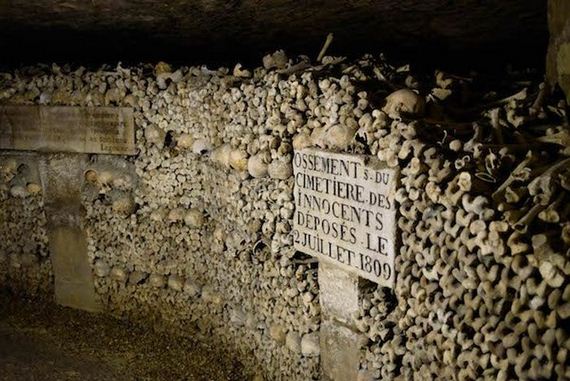 The Wall, St. Croix, U.S. Virgin Islands. The Wall is a 2-mile straight vertical drop to the ocean floor. As soon as you leave the beach, the water is shallow, warm and amazingly clear. You can swim with colourful fish and snorkel among the scattered coral formations on the ocean floor. About a quarter mile out, however, it just drops. The depth goes from 1,000 feet to 2 miles, straight down, and the water changes from warm and clear to cold and solid black. It’s like swimming over a black abyss of nothing. Just cold, dark, evil nothingness. 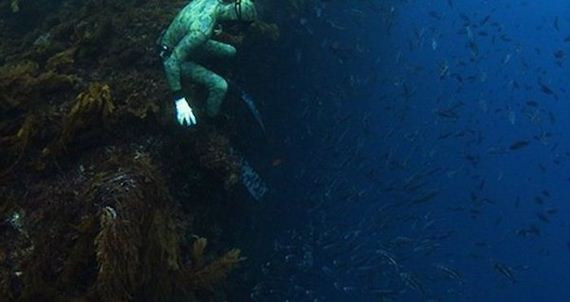 Aokigahara Forest: The Suicide Forest, Japan. Since the 1950’s, more than 500 people have committed suicide in the Aokigahara forest. Almost half of that number just comes from 2010. Generally, anyone going to kill themselves in the forest, will resort to hanging themselves or overdosing, and due to the density of the forest, you might not get found. The government only cleans up the forest once a year; otherwise you’re likely to stumble upon a successful attempt any time you go in. 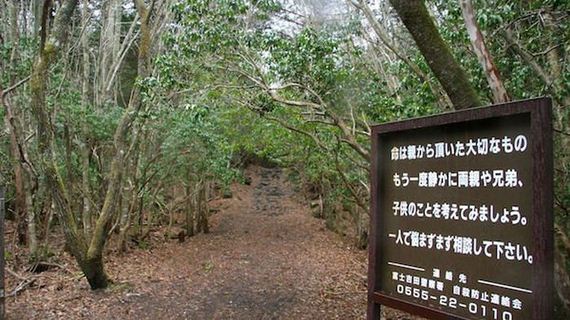 Mexican Doll Island, Mexico. Just south of Mexico City, between the canals of Xochimico, there’s a small island that was never meant to be a tourist destination, but through tragedy, has become one. Legend has it that a girl was found drowned under mysterious circumstances on the island, and to quell her spirit, thousands of dolls found their way to the island. There’s severed limbs, decapitated heads and blank eyes that just stare at you. The rumour is that she inhabits the dolls, so it’s not odd to see them opening their eyes or moving. 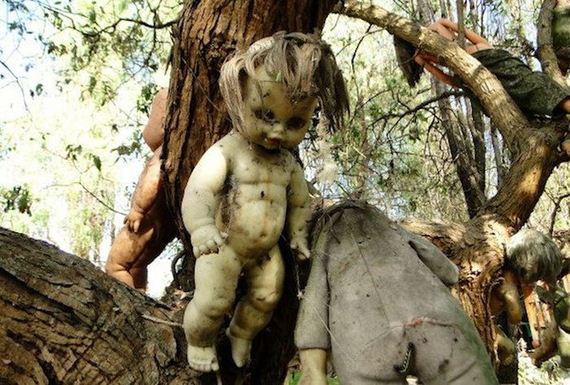 Darien Gap, Panama. This is an area of swampland that separates Central and Southern America and essentially cuts off the connection between the two. As it would have been expensive to build roads, here, it’s all swampy terrain with no clear paths. If you try to navigate it on foot, you’ll be dealign with poisonous plants and dangerous animals. Then there’s the insurgents from either side that are looking to kill or kidnap you, for any number of reasons. This is considered one of the most dangerous places on earth, full of abandoned signs attempts at civilization and hiding places for all the nopes in the southern hemisphere. 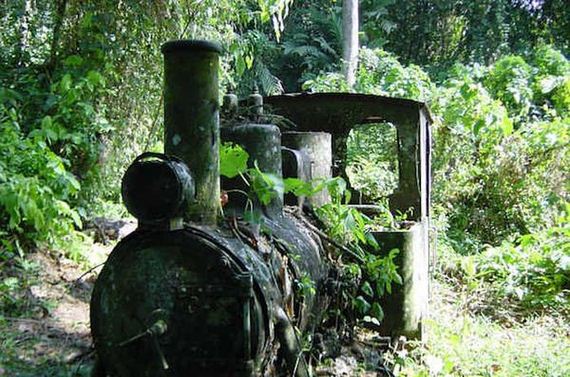 The Marianas Trench, Pacific Ocean. One of the deepest known points on earth, no one really knows what’s down there. It’s deeper than the average causing altitude of commercial airliners and is full of nightmare fuel and nope creatures. There’s been several expeditions down to the Challenger Deep, which is the deepest crevasse, but they couldn’t go all the way down, as the pressure was too deep. If this is what lives down there, I’m ok. I’ll stay on land, thanks. 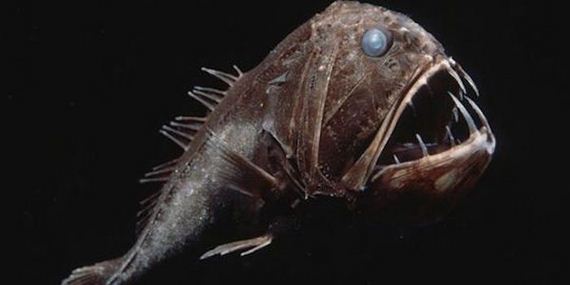 The Overtoun Bridge, Scotland. On the road to to Overtoun House near Dumbarton, Scotland, is a bridge that invites suicide, especially in dogs. Since the 1950’s at least one dog per year has jumped off the bridge, onto the waterfalls below. Several animal behaviourists and scientists have tried to figure out a reason for it, but everyone is stumped. Whenever someone takes their dog on the bridge, they will try to kill themselves. There’s signs everywhere to make sure you keep your dog on a leash, but some dogs are so persistent in jumping that they break away. Now that’s sad; poor doggos. 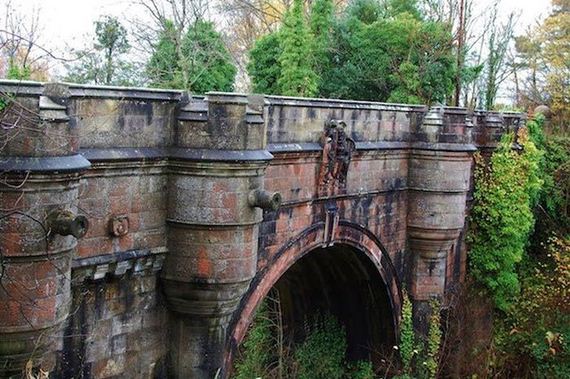 Door to Hell, Derweze, Turkmenistan. The entire area of Derweze is rich in natural gas. While drilling in 1971, soviet geologists tapped into a cavern filled with natural gas, and caused the cavern to collapse, creating a huge hole with a diameter of 229 feet. To avoid the gas discharging and poisoning the air, they decided to burn it off. They figured it would burn out in a matter of days, but it’s been 46 years. It literally looks like the doorway to the hottest place in the afterlife. That’s a hell nope! 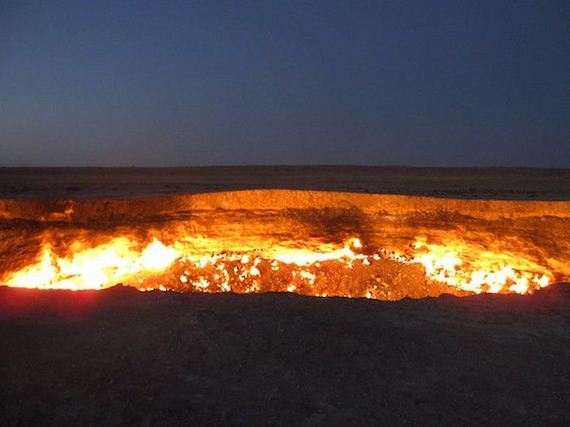 The Gates of Hell, New Jersey. This is a legendary passageway that leads to a network of underground tunnels and storm sewers, and, according to rumours, the lair of the devil himself. While other drains and tunnels are square and full of water, this tunnel is made of stone, always dry and filled with satanic symbols, bones and other esoteric items. There’s also a legend that if you follow the tunnels all the way down, there’s a room only a few can enter, with a glowing skull and the devil himself. Go Devils. 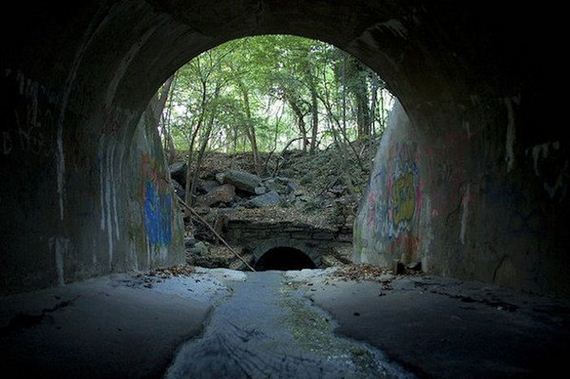 Catacombe dei Cappuccini, Italy. These catacombs present an endless array of preserved corpses, a lot of them being either small children and babies, or friars. Originally, after the graveyards got full, the friars excavated catacombs for their burial and used a special solution to preserve the bodies. Since the 1500’s, it also became fashionable to be buried down there as a symbol of status, so up until the 1920’s you could find yourself there. It’s now a tourist site, where you can take a tour and see all the skeletons, arranged in various positions, including the very last body in there; 2-year old Rosalita, who’s still perfectly preserved. 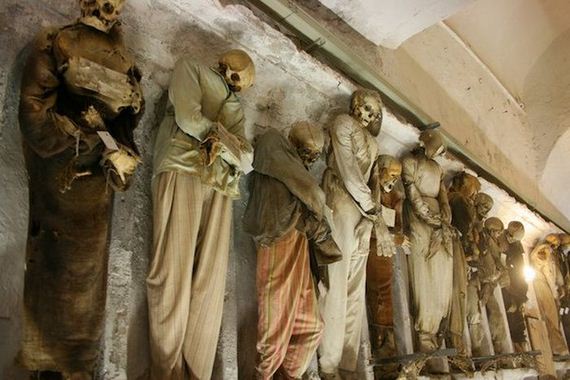 Gas Chambers, Auschwitz, Poland. This is one of the creepiest places on earth, and this image one of the saddest. During World War II, it’s estimated that 2.1 to 2.5 million Jews, Soviet soldiers, Gypsies, Poles and other people from Slavic and European backgrounds, were gassed to death in the gas chambers at Auschwitz. This image is of an inner wall of a chamber and those white lines are nail marks of people being gassed, as they tried to escape. This place shows the worst of humanity and it’s like every lost soul is just imbued in the ground there. You can feel it all there. It’s both creepy and incredibly sad. 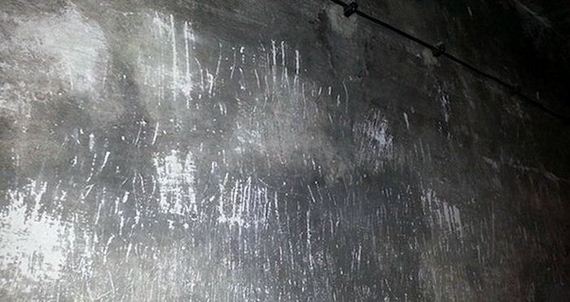 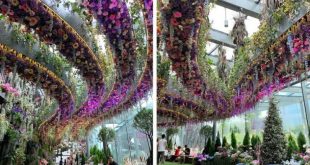 22 Smart Designs From Cities Around The World 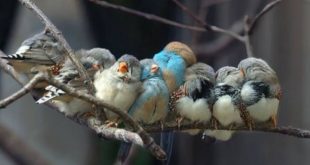 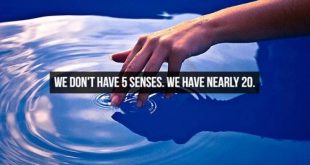