Alan Rickman wouldn’t let Matthew Lewis and Rupert Grint get near his car. 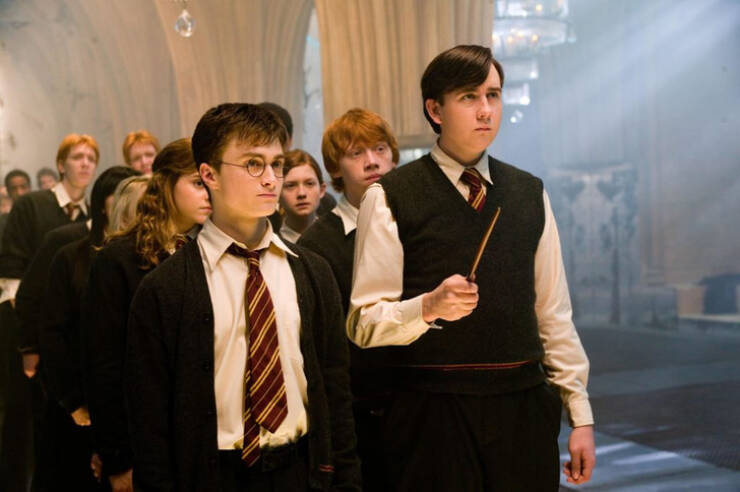 During the filming of the 5th movie, Alan Rickman, portraying Professor Snape, prohibited the actors that played Neville and Ron from coming anywhere near his new BMW. When filming the 4th movie, the boys spilled a milkshake inside his car.

The director was surprised when he learned about Alan Rickman’s contact lenses. 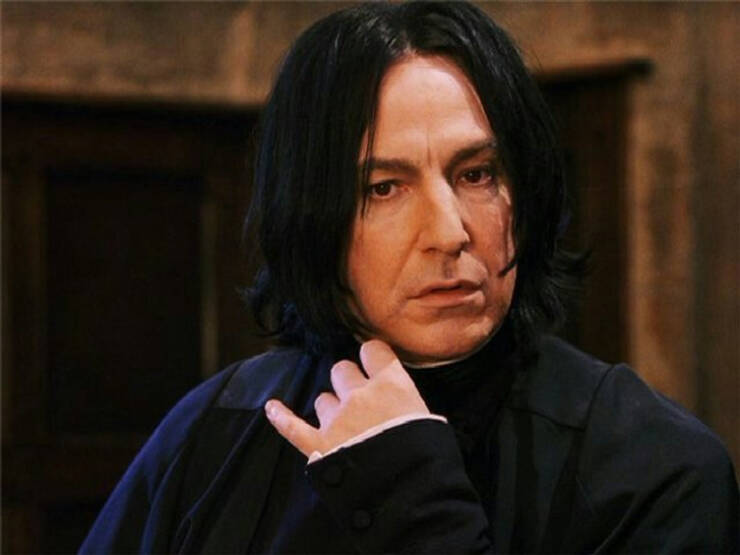 The director of Goblet of Fire, Mike Newell, didn’t know that Alan Rickman wore black contact lenses for his role. He praised the unique eye color of the actor, and Rickman leaned toward him and took out his lenses.

A funny thing Malfoy says is only there because Tom Felton forgot his lines. 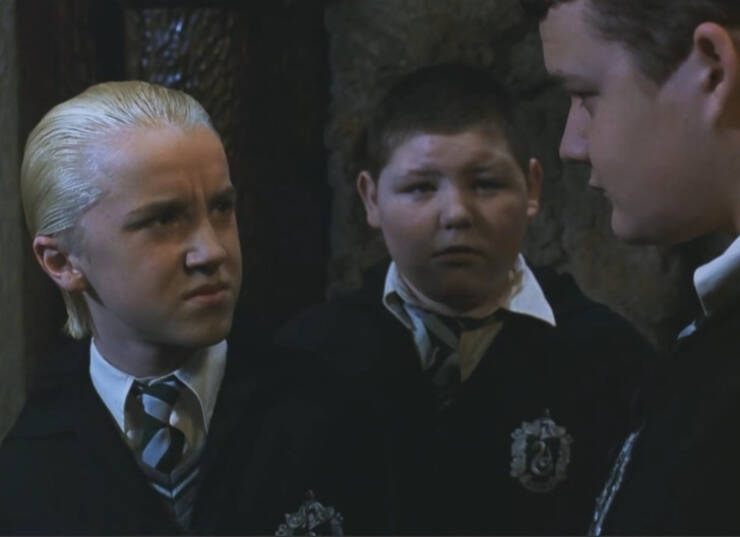 In Harry Potter and the Chamber of Secrets, Harry, Ron, and Hermione drink the Polyjuice potion and turn into Draco’s friends. When Malfoy sees Harry, who turns to Goyle but forgets to take his glasses off, he says, “Didn’t know you could read.” This funny line is Tom Felton’s improvisation because he forgot what he was actually supposed to say.

The Gryffindor and Slytherin confrontation continued even after the director said, “Cut!” 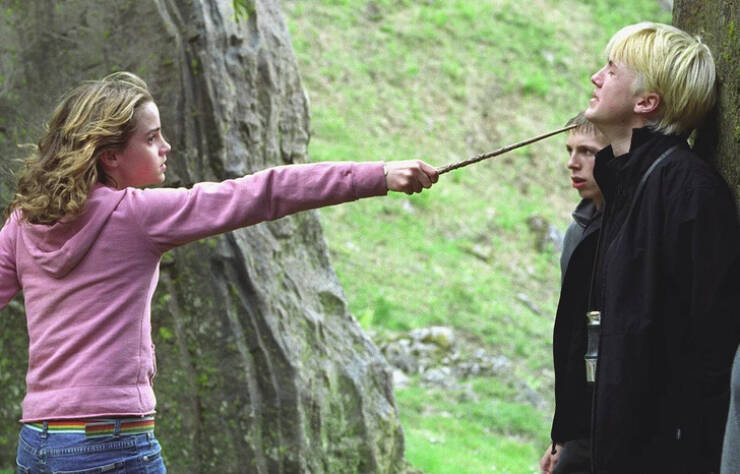 In his memoirs, Tom Felton said that the child actors formed clans on the set. One included Daniel, Rupert, and Emma, and the other — Tom and the other Slytherins. They never missed a chance to joke with each other. Tom feels ashamed of one particular incident when he almost made Emma Watson cry.

The actors would get red cards on the set. 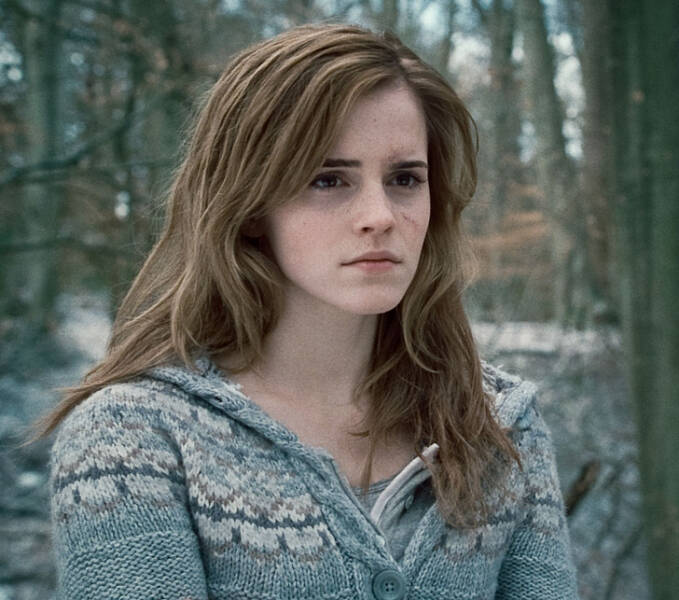 Since many of the teenagers on set wouldn’t always behave, the crew introduced a system of red cards. Those who got them were supposed to pay a fine. Emma Watson got her only red card when they filmed the last film. She couldn’t stop laughing when they were doing the scene with Luna Lovegood’s father.

Daniel Radcliffe broke from 12 to 20 wands. 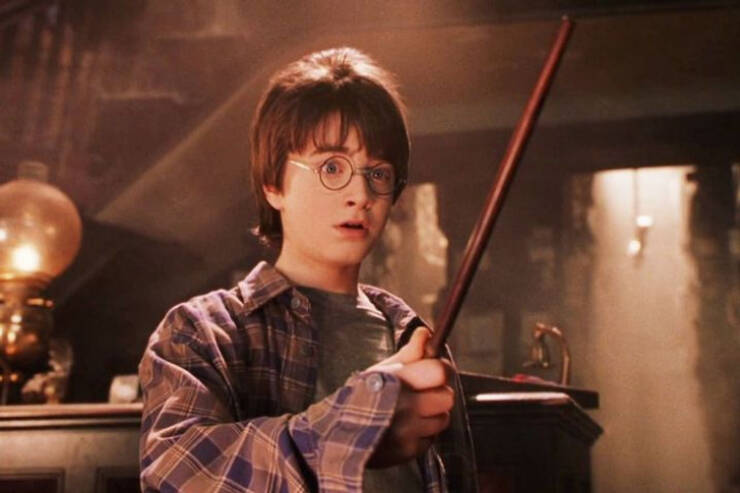 There are rumors that Daniel broke a lot of props during filming, mostly — wands. Some sources even say it was between 60 and 100. Daniel confirmed the rumors and said he used wands as drumsticks, but he didn’t break that many — maybe somewhere from 12 to 20.

Evanna Lynch, who played Luna Lovegood, was scared of showing up on set. 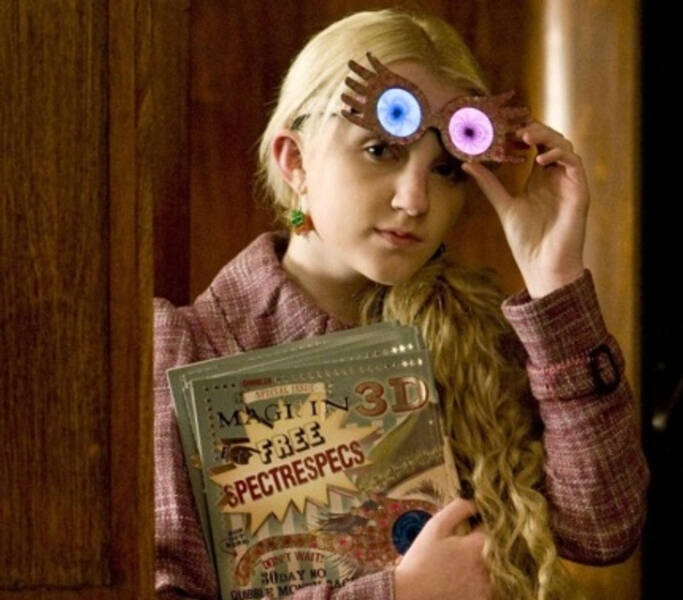 Evanna joined the cast in Harry Potter and the Order of the Phoenix. She had been a fan of the saga for many years, so she was nervous the first time she appeared on set. She even rehearsed talking to the actors that played the main characters. But it wasn’t as scary as she thought. Evanna says that Emma was incredibly kind to her. The young actress did everything in her power to make her feel comfortable. 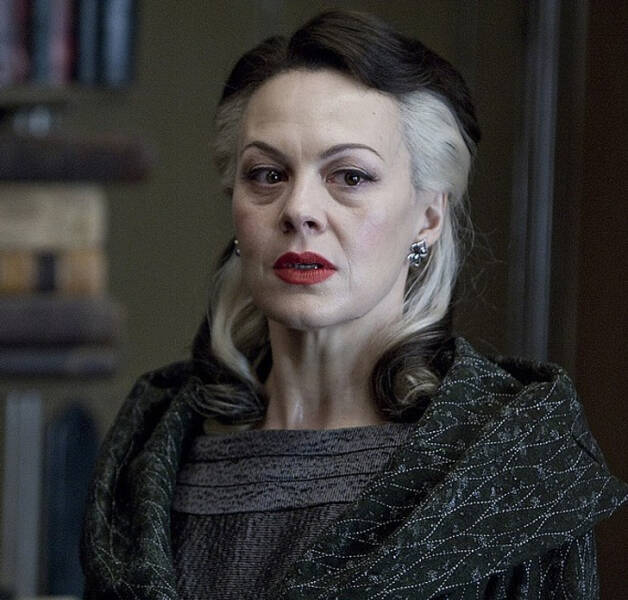 Actress Helen McCrory, who played Narcissa Malfoy, was supposed to be Bellatrix Lestrange. But she got pregnant and was replaced by Helena Bonham Carter. 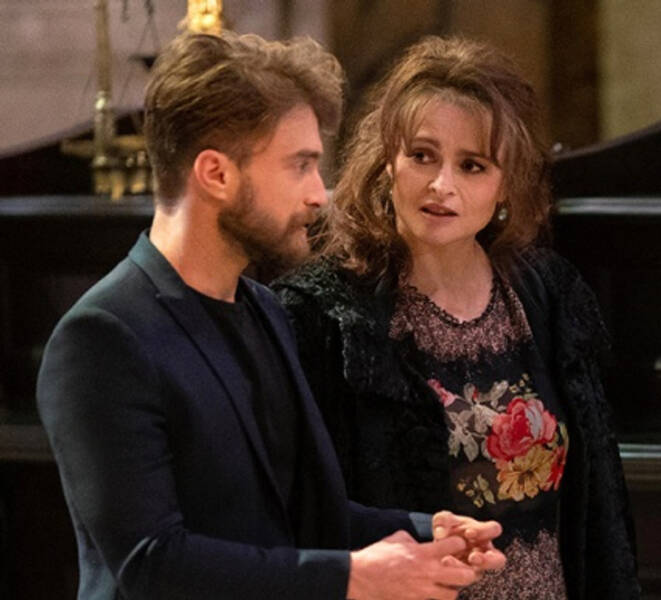 Later, it became known that Daniel and Helena texted each other a lot after working on the episode and were planning to meet up. Radcliffe said that he noticed how cool it was that he got older and could speak to his colleagues as equals.

The actor that played Lucius Malfoy had to ask for screen time. 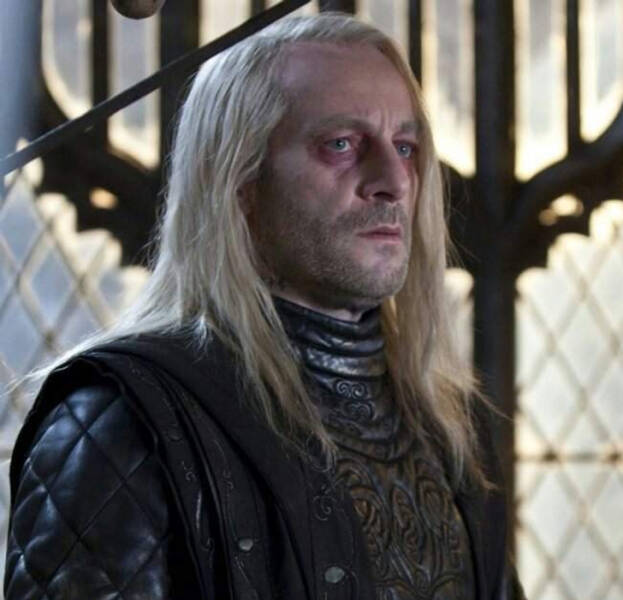 Jason Isaacs begged Joanne Rowling to let his character out of prison. Lucius got into Azkaban, and he was supposed to be there still during the sixth film. But the actor wanted to be in the last movie so much that he begged Joanne. As we know, he was in both of the final films and played substantial roles in each. 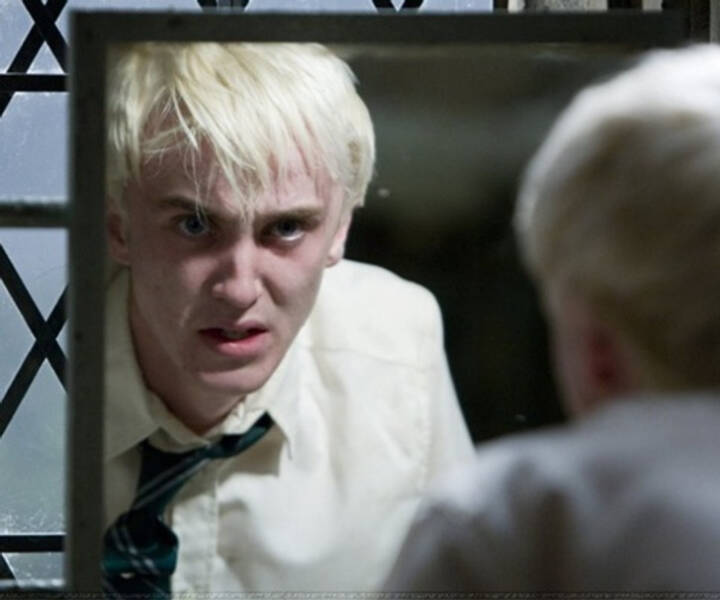 Tom said one of his favorite scenes was the duel with Harry in the sixth movie. In other episodes, special effects were added in post-production. But in this instance, the director thought the toilets and the sinks had to explode in real life. Tom loved this more realistic approach.

The scenes in the Room of Requirement exhausted the actors. 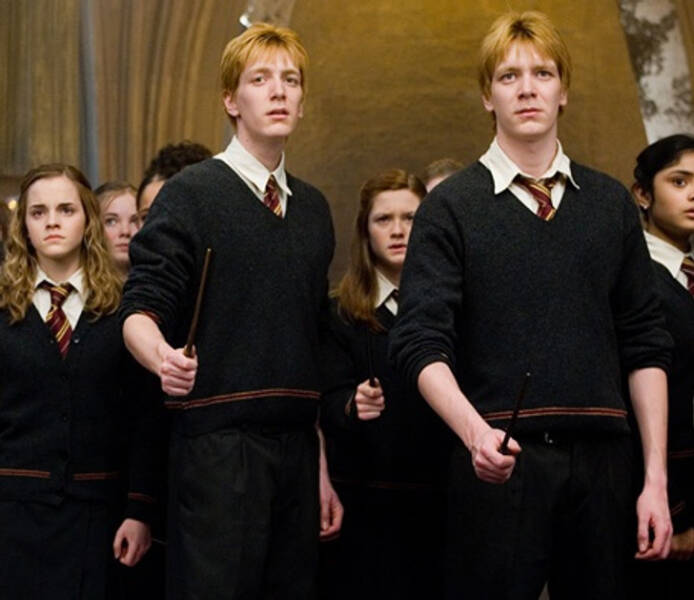 According to the actors that played Fred and George, they didn’t like filming the scenes in the Room of Requirement. They said that it was very uncomfortable and hot on the set. Their colleague, Bonnie Wright, who played Ginny Weasley, didn’t like those moments either: she had claustrophobia, so working in a tight space with many people wasn’t an enjoyable experience.

They needed to redo the bra scene many times. 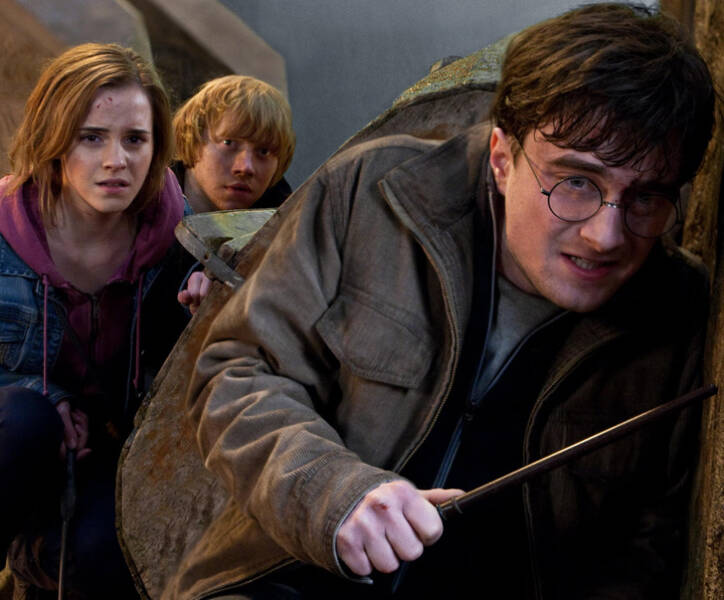 In Harry Potter and the Deathly Hallows — Part 1, Harry’s friends take the Polyjuice potion, turn into him, and wear his clothes. Daniel had to work hard to learn the characters’ mimics and behavior. And when Harry was Fleur, the actor needed to undo his bra very fast — and he couldn’t do it with one hand. To get the perfect shot with 7 Harries, they ended up having to do 90 takes!

Daniel Radcliffe brought a photo of Cameron Diaz to the set. 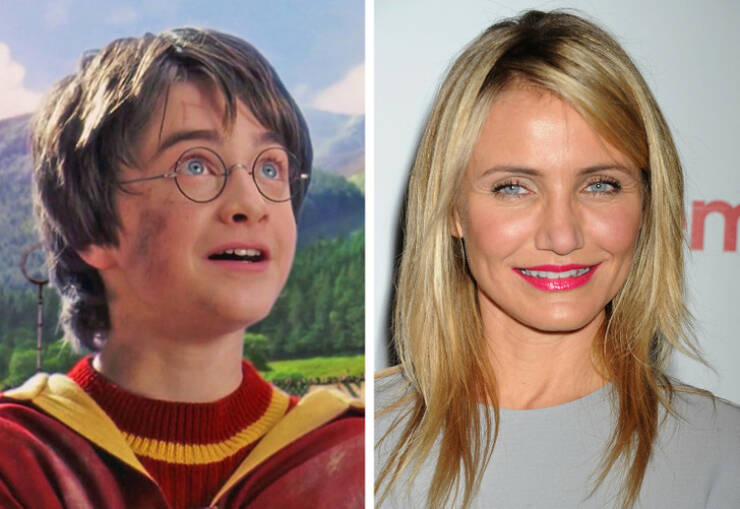 Tom Felton shared a funny story from the quidditch filming in his memoirs. When they were working on one of the movies, the director asked the actors to bring personal things they could use instead of the balls, so they would look in the proper direction. Tom brought a photo of a fish and Daniel — a picture of Cameron Diaz.

Bonus: Why Robbie Coltrane was happy to play Hagrid. 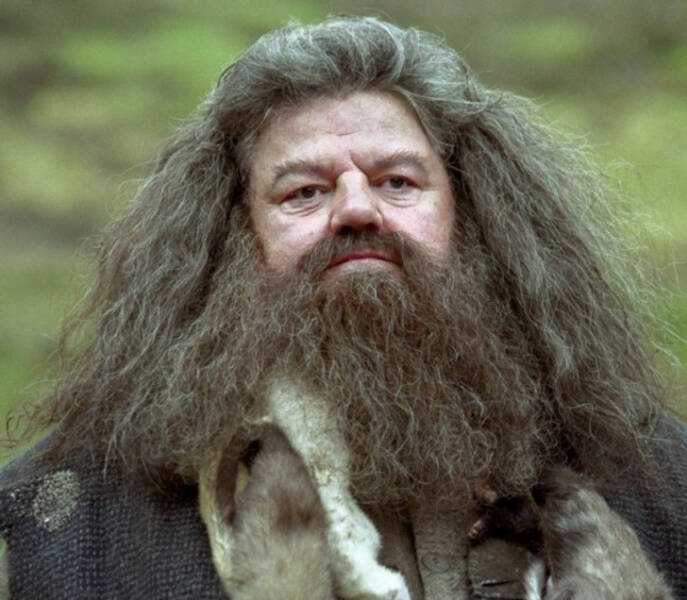 The actor, who portrayed Hagrid, said he was happy to play a really good guy at least once. He always got ambiguous characters, including criminals. Unfortunately, Robbie Coltrane passed away on October 14, 2022. Wands up, Hogwarts!