There is a number of famous people who seem like they “refuse to be famous”, whether it’s deliberate or not. Twitter user Skoog pointed out how Patrick Wilson, who starred in “Aquaman” (2018), “Watchmen” (2009), “Insidious” (2010), and many others, said he’ll be starring in millions of movies, but still avoids becoming famous. 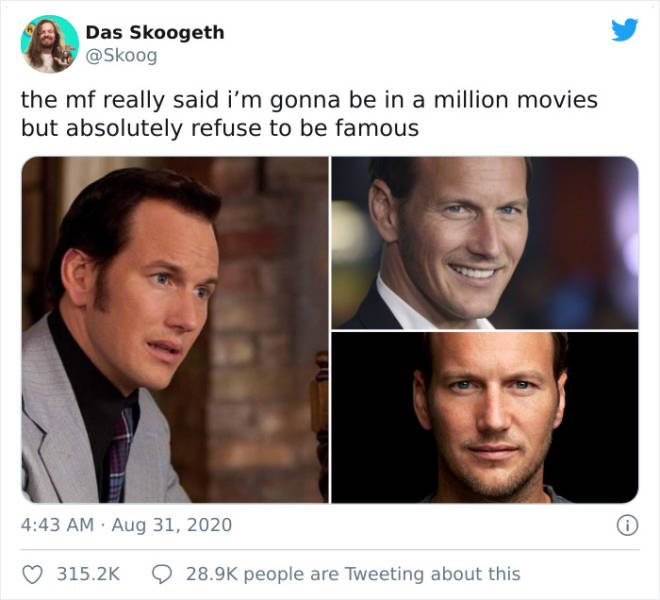 Patrick Wilson is an American actor and singer who spent his early career days starring in Broadway musicals and started showing up in films and series in the early 2000s. He is best known for his roles in Aquaman (2018), Watchmen (2009), and Insidious (2010).

Fun Fact: Wilson himself saw this tweet and responded with “Dammit. My plan has been thwarted.” His wife also joked in another tweet: “Dang it. You’ve quietly worked so hard to be in a million movies and NOT be famous…and now the secret is out.” 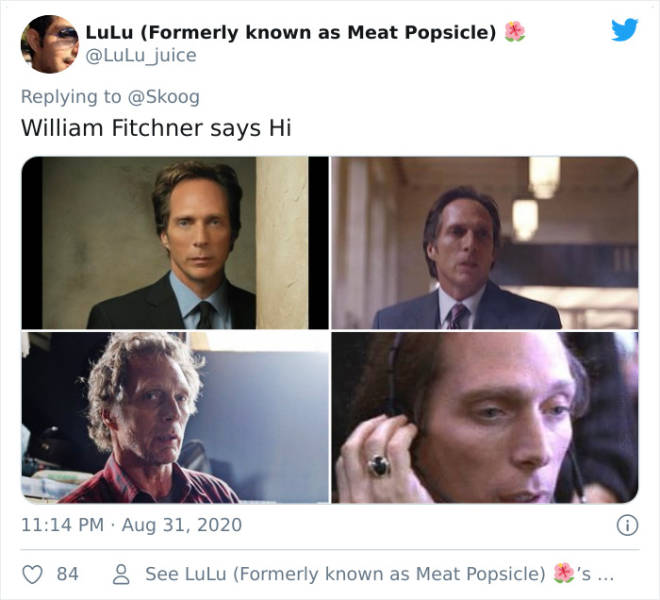 William Fichtner began his acting career as Josh Snyder in As the World Turns in 1987. The start was a bit slow, but in several years, Fichtner quickly became a common occurrence in movies, starring in at least a handful of movies annually ever since 1995. He is best known for his work in Armageddon (1998), Black Hawk Down (2001), and Crash (2004). 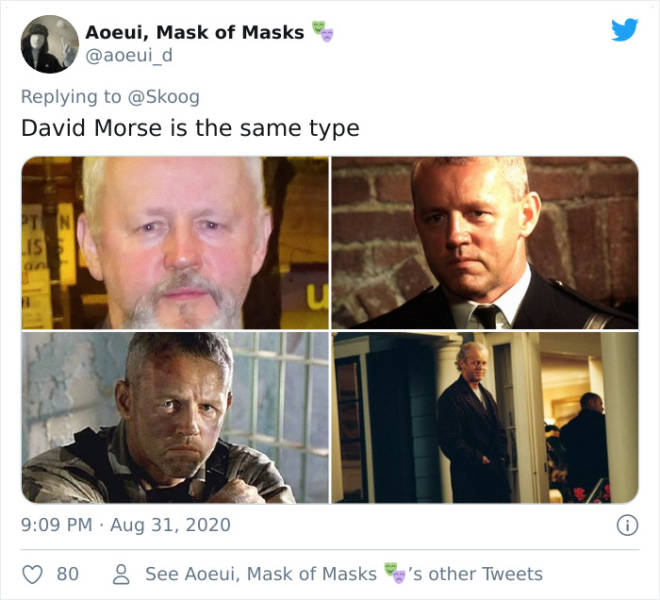 David Morse is an American actor, singer, director and writer. Morse kicked off his career back in the early 1980s and has since then been featured in films like The Negotiator (1998), The Green Mile (1999), and 12 Monkeys, among many others. 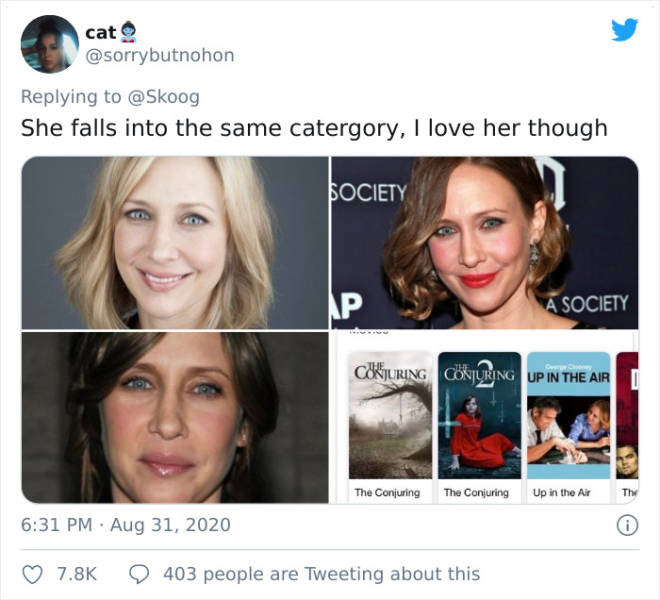 Vera Farmiga is an American movie and TV actress, director, and producer, who began her professional acting career on stage in the original Broadway production of Taking Sides (1996). She is best known for her work in The Conjuring series, Bates Motel, and Orphan. 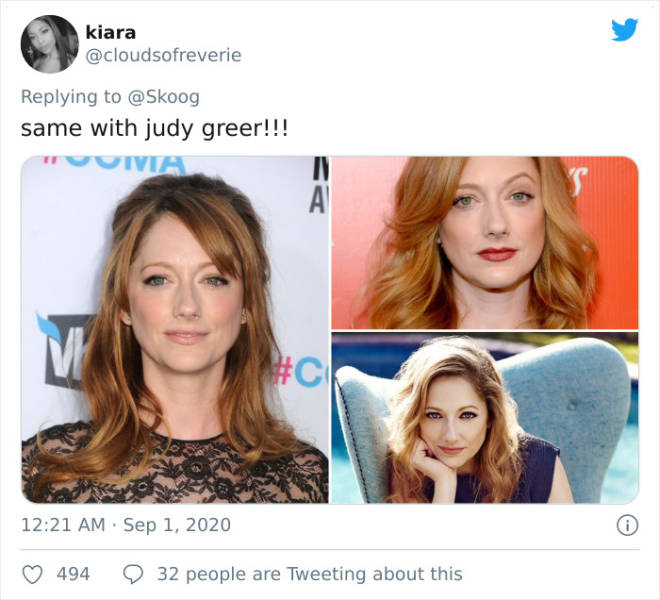 According to the New York Times, Greer doesn’t want more stardom, but she does want the attention that opens doors professionally. As a director she said asked herself why should she play the role when she can get someone else, like Jennifer Garner to do it.

Besides that, she wouldn’t want to see herself in the editing room all the time: “I don’t have that kind of self-esteem. I could not ever watch a performance of my own while doing it and be like: ‘Oh, that was an awesome take. We can move on, I really nailed that.’” 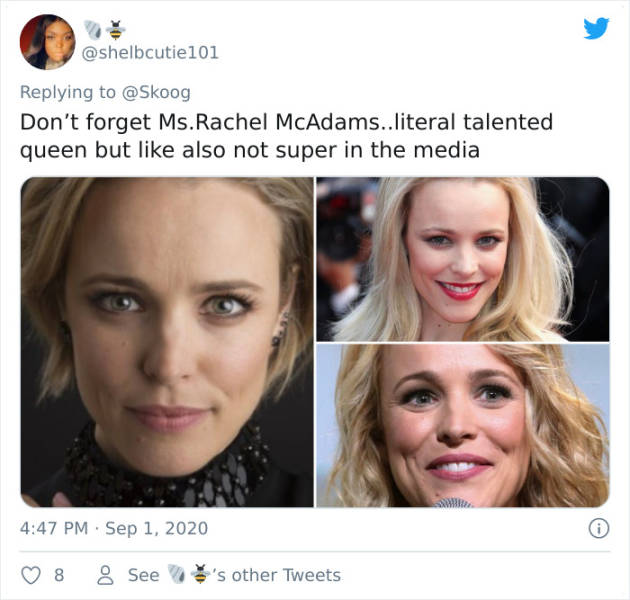 Rachel McAdams is a Canadian actress who is best known for being in that “It’s never gonna happen” meme ripped straight out of Mean Girls (2004). Besides that, she also starred in the Notebook (2004), Red Eye (2005), and Sherlock Holmes (2009), just to name a few.

In an interview with LA Times, she was asked whether McAdams herself even wants to be a movie star, to which she responded: “I think it was sort of a vague idea in my mind when I was a kid, when you think, ‘What would that be like?’ But it wasn’t something I really meditated on or planned for in any way. I really thought I’d be doing theater in Canada. I’d grown up doing children’s theater there, and I always imagined myself being artistic director of a children’s theater company.” 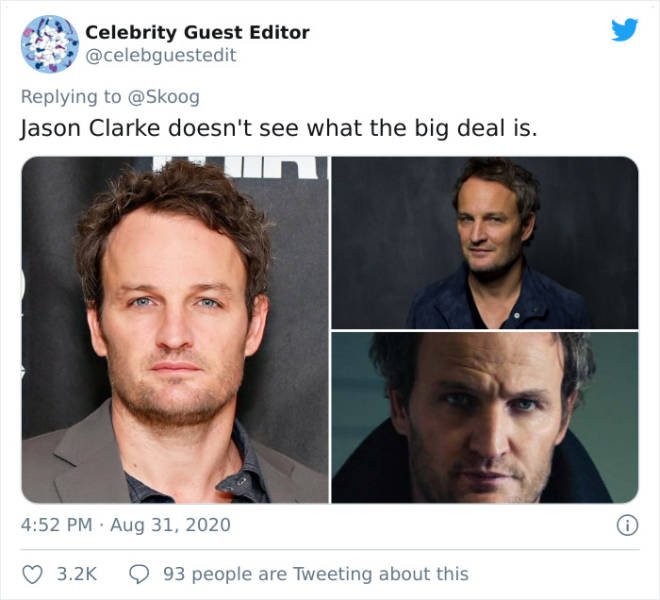 Jason Clarke is an Australian-born actor known for often being cast as an antagonist in a number of feature films. He is best known for his work in movies like Terminator Genisys (2015), Mudhound (2017), and Zero Dark Thirty (2012)

Clark himself explained in this interview that he enjoys the craft, and not the celebrity—he never really wanted to be a big Marvel movie actor as he wants a life outside of the acting business, which might explain things. 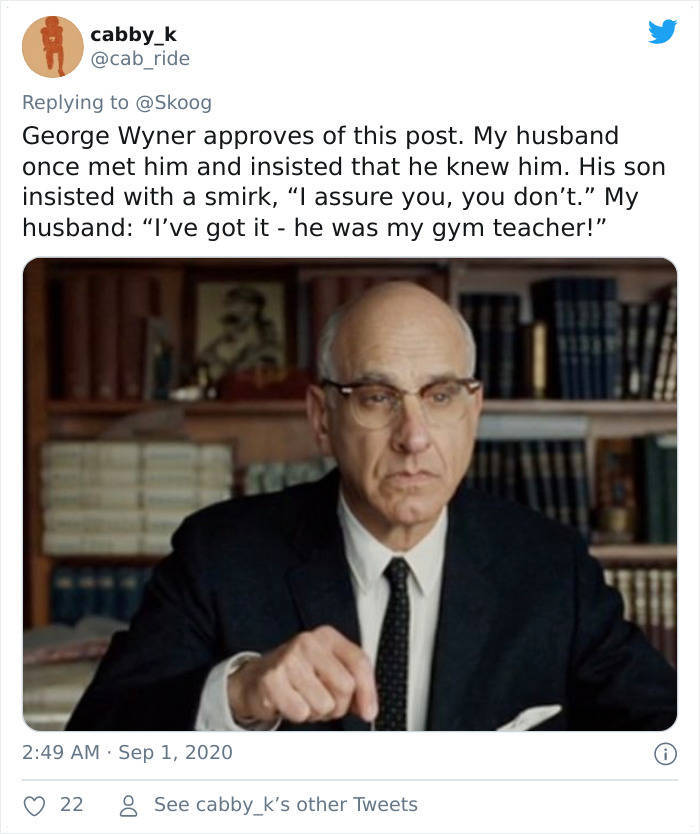 George Wyner is a Boston-born actor who started off in television in the early 1970s but later also started appearing in a number of movies, including Spaceballs (1987), A Serious Man (2009), and The Postman (1997). 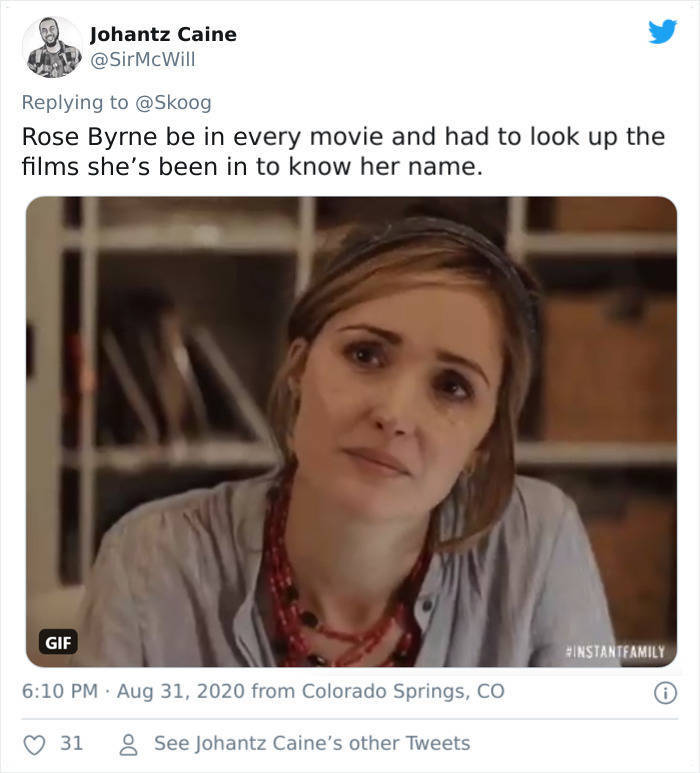 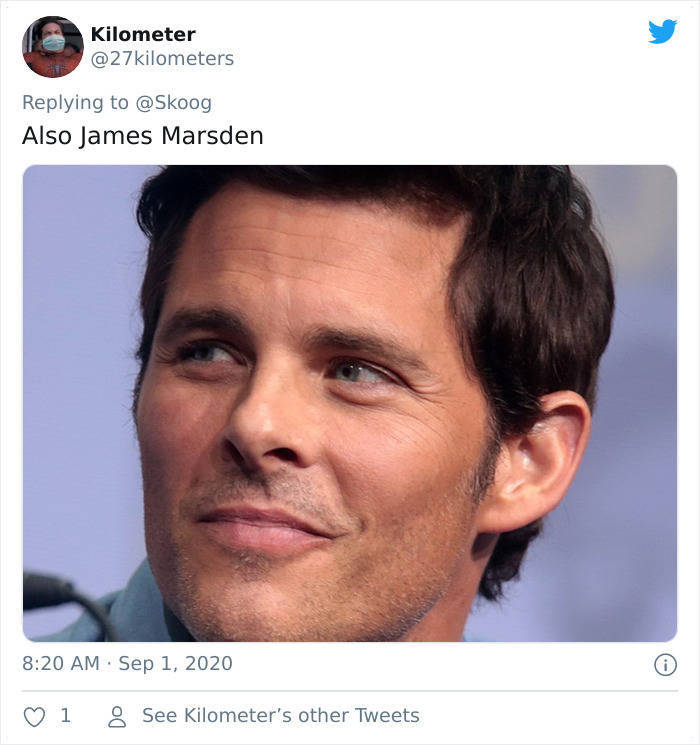 It is speculated that Marsden is not that famous because of supposed Hollywood politics, while others think he just made bad choices in where he wanted to go, which pushed him away from stardom. 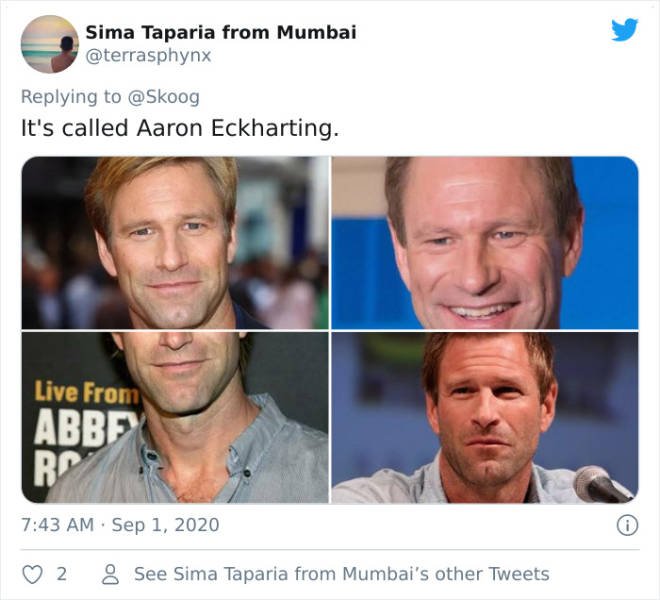 Actor and producer Aaron Eckhart was born in Cupertino, California, but has lived in a number of other places around the globe, including the UK and Australia. He has been acting since the early 1990s with his most notable work being in The Dark Knight (2008), Thank You for Smoking (2005) and In the Company of Men (1997).

People are speculating that he is underrated only because she just chooses to do more films in the vein of “Battle For Los Angeles,” which is an action war film, rather than “Thank You For Smoking” and “The Black Dahlia,” which are dramas. 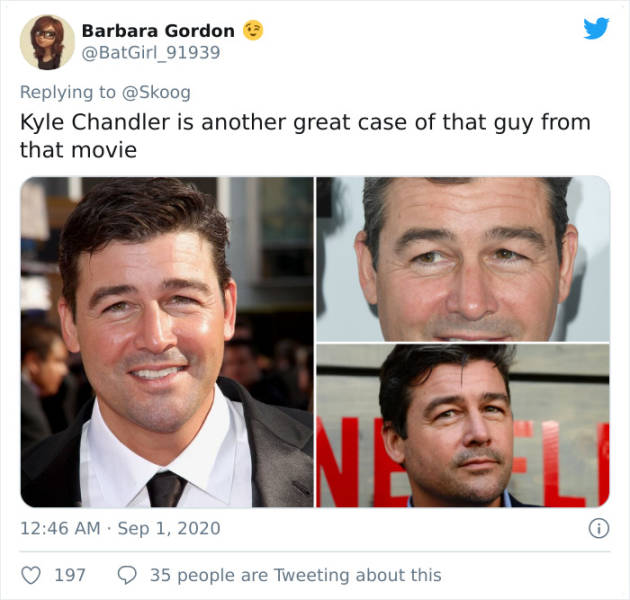 Kyle Chandler is an American actor who’s made his screen acting debut back in 1988 after being signed up for ABC and starting off as a supporting actor in Quiet Victory: The Charlie Wedemeyer Story, but he is best known for his work in Super 8 (2011), Argo (2012), Manchester by the Sea (2016), and Friday Night Lights (2006-2011). 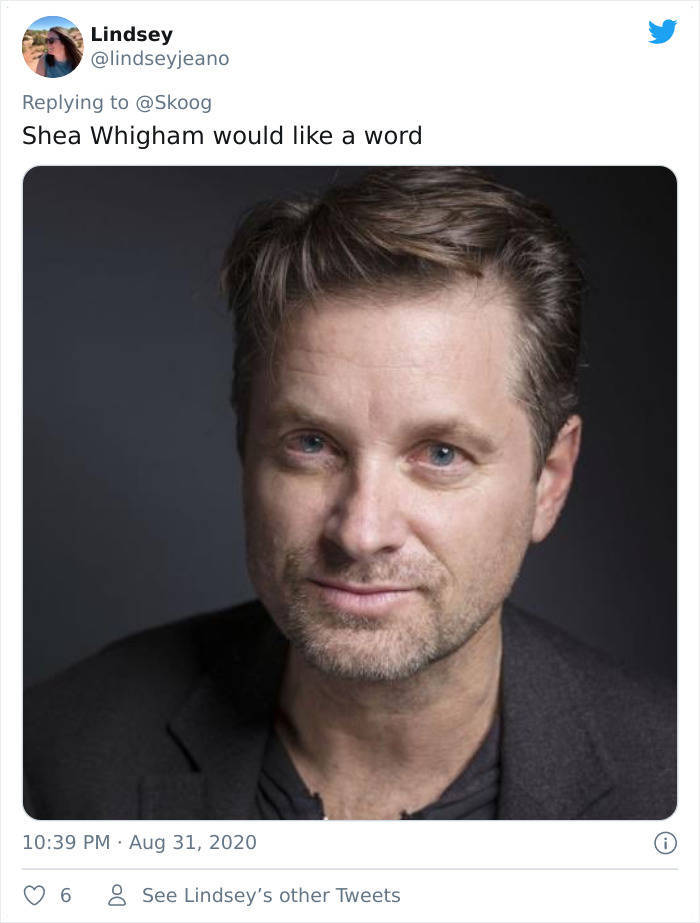 Actor and producer Shea Whigham was born in Tallahassee, Florida. Though his acting debut was in one 1997 episode of the television series Ghost Stories, his first starring role was just three years later in Tigerland (2000). He’s now best known for his work in Take Shelter (2011), Death Note (2017), Wristcutters: A Love Story (2006), and American Hustle (2013). 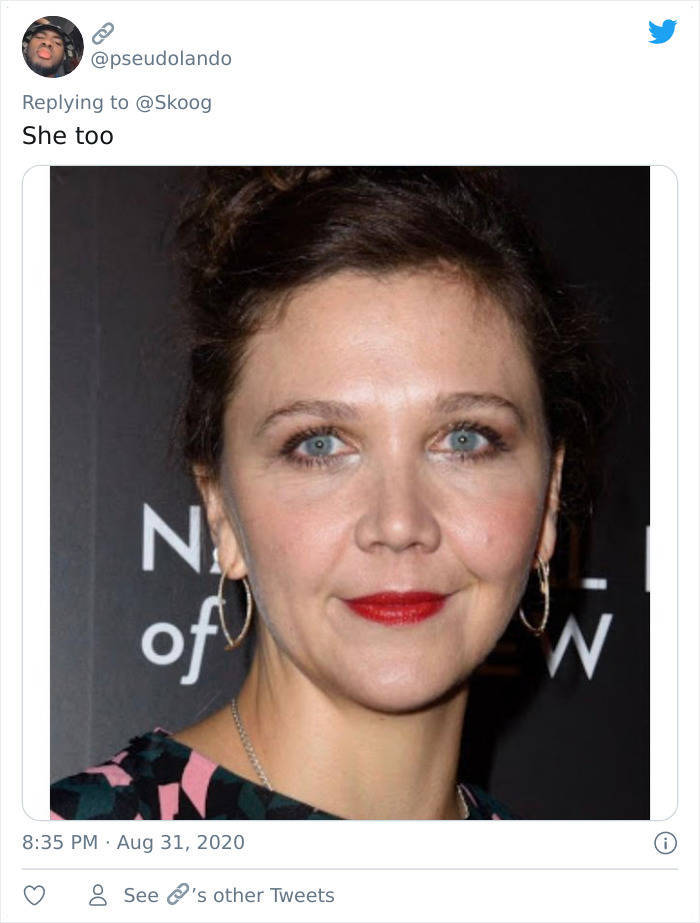