16 Facts You Didn’t Know About “Friends”

In the episode where Monica and Chandler get married, you can see Jennifer Aniston’s real last name. 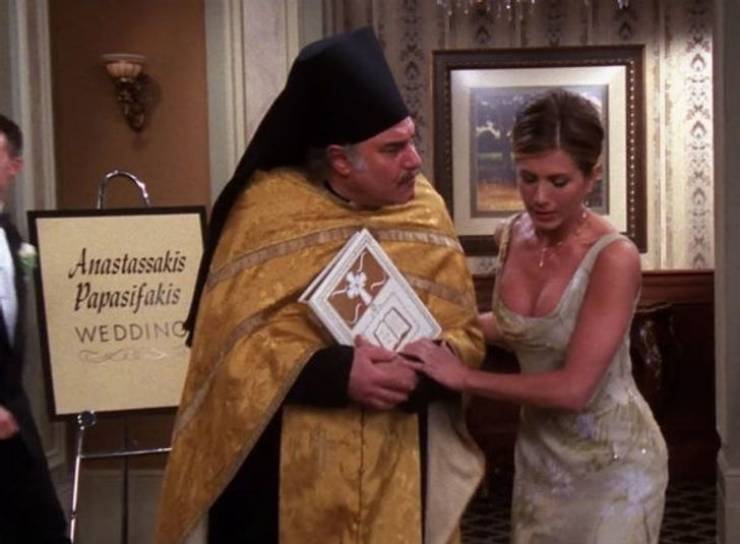 Rachel is walking around and sees a room where a Greek wedding is taking place. One of the last names on the board is Anastassakis. This is the real last name of Jennifer’s father that he changed after he moved from Greece.

The main characters were named after the characters of All My Children. 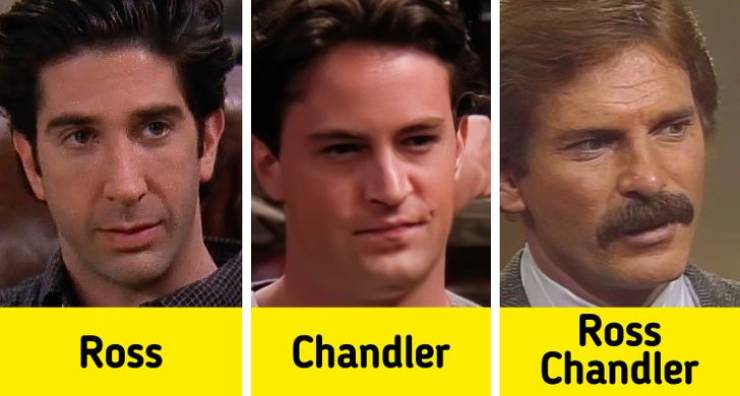 All My Children was a daytime soap opera that was on the air for 41 seasons, from 1970 to 2011. The creators of Friends loved watching it, so they decided to name all the characters after the characters in the show.

Chandler was named after the Chandler family; Ross, after Ross Chandler; Phoebe, after Phoebe Tyler; and Monica, after Monique/Daisy Cordlandt. Joey got his name from Joey Martin, and Rachel Green, after Janet Green.

Lisa Kudrow played the waitress, Ursula, in Mad About You. 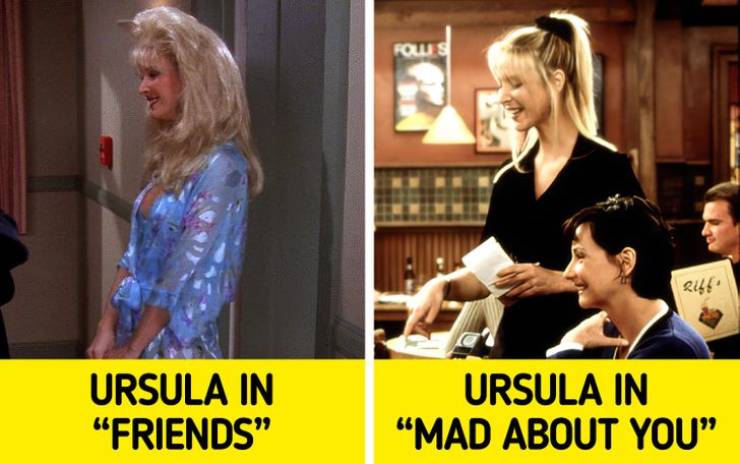 In Mad About You, Lisa Kudrow played a supporting character, a waitress named Ursula. The creators of Friends decided to make Ursula Phoebe’s twin sister.

In one of her interviews, Lisa Kudrow said, “When Friends got its time slot on Thursday night at 8:30 after Mad About You, everybody realized ’we need some explanation for the audience — why are they seeing the same girl with the same voice at 8 o’clock and 8:30 on 2 different shows?’”

By the way, Leila Kenzle and Helen Hunt appear on Friends in a scene where they think that Phoebe is Ursula. This is because they both were on Mad About You and they know Ursula from there.

When the friends pour coffee into the pot, the flower dies by the end of the episode.

The creators of Friends paid close attention to the smallest of details. For example, in the scene where Rachel made her first coffee for Chandler and Joey, there’s a flower on the table. The coffee was so bad that they had to pour it into the flower pot. By the end of the episode, the flower is dead.

In the scene where Joey thinks that Monica is pregnant, Chandler’s tie looks like a positive pregnancy test. 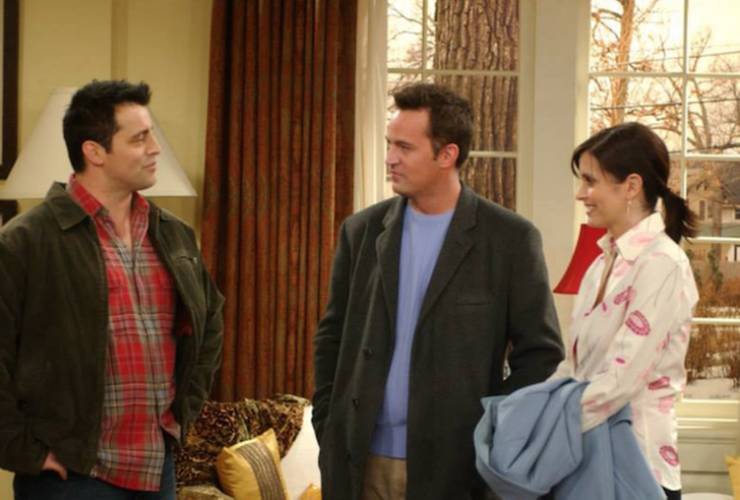 When Monica and Chandler are scared to tell Joey that they want to live together, he thinks they want to tell him a different piece of news — that Monica was pregnant. Maybe it was because of Chandler’s tie.
The house that Chandler and Monica buy was in Home Alone.

In the series and in movies, you can often see the same places and decorations, but it’s really hard to notice such things. But the most attentive viewers recognized the house Kevin McCallister lived in. By the way, the McCallisters actually live in Chicago, and Monica and Chandler were moving into a New York suburb.

In the episode about Joey’s new brain, Susan Sarandon slaps her own daughter on the face. 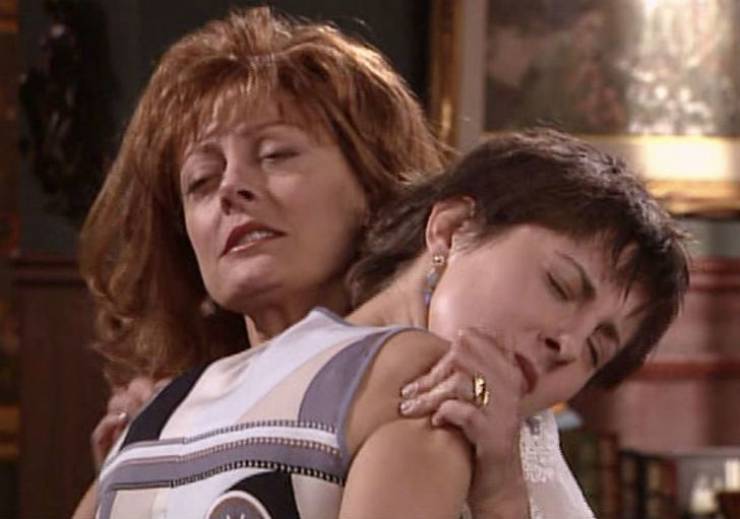 Susan Sarandon appeared on Friends as an actress from the show that Joey was working on. Her character was going to be cut from the show and have her brain transplanted into the body of Joey’s character. Sarandon was known for being really good at slapping people across their faces, and Joey was supposed to learn to do the same thing. The girl that was slapped by Sarandon was Eva Amurri, an actress who happens to be her actual daughter.

Rachel was actually reading the script of Friends when she was pretending to be reading Days of Our Lives. 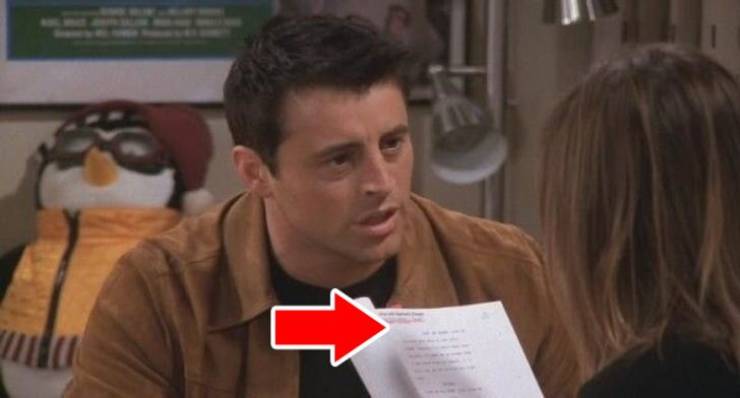 In episode 19 of season 9, Joey asks Rachel to help him learn his lines for his role in Days of Our Lives, and she reads the lines for him. But, in fact, she was holding the script for that very episode of Friends. If you pause the episode, you can read the words, “The One with Rachel’s Dream.”

Matthew Perry’s father appears in the show in a small role. 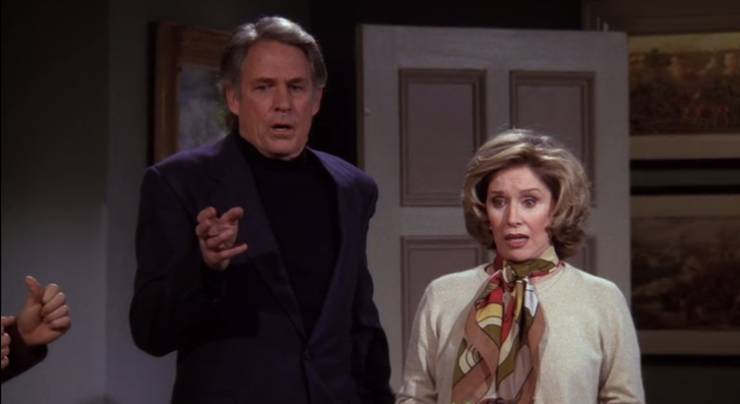 He portrayed the father of Rachel’s boyfriend, Joshua, in the scene where he and his wife come home at the worst time possible.

Jennifer Aniston and Tate Donovan were dating during the show. 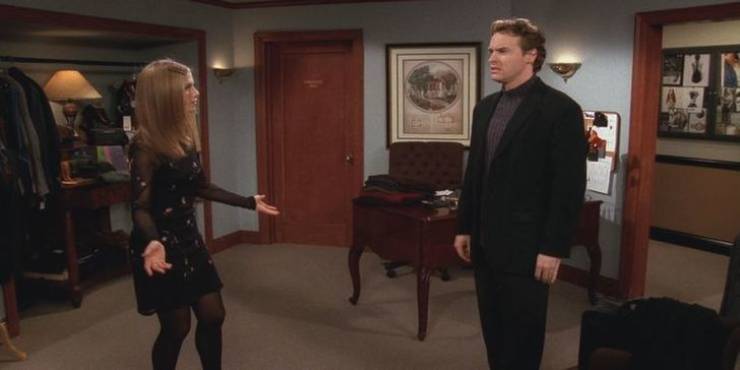 Tate played Joshua, the guy Rachel was choosing clothes for and fell in love with. For a very long time, she was trying to date him, but he wasn’t ready for a relationship.

In real life, Jennifer Aniston and Tate Donovan dated, but it ended right when they had to show love on the screen. Donovan admitted that it wasn’t an easy job for him.

The producers of the show appear on screen as extras. 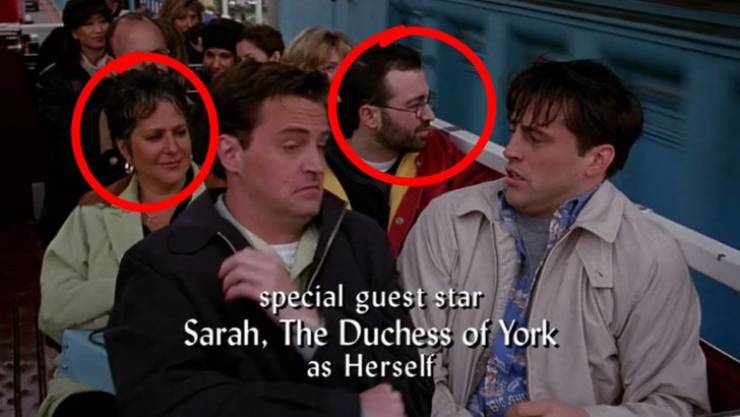 In 10 seasons, the producers of the series have appeared in a handful of episodes. For example, in the first episode of season 3, they take the friends’ famous coffee shop couch. Also, you can see Marta Kauffman and Adam Chase in the scene where Joey and Chandler are riding the bus in London in the episode where Ross gets married.

By the way, in the very same episode, you can see Sarah Ferguson, the former wife of Prince Andrew. She agreed to take part in the show because her daughters, princesses Beatrice and Eugenie, were huge fans of the series.

One of the funniest cameos was done by Ilia Volok, who portrayed a dry cleaner. 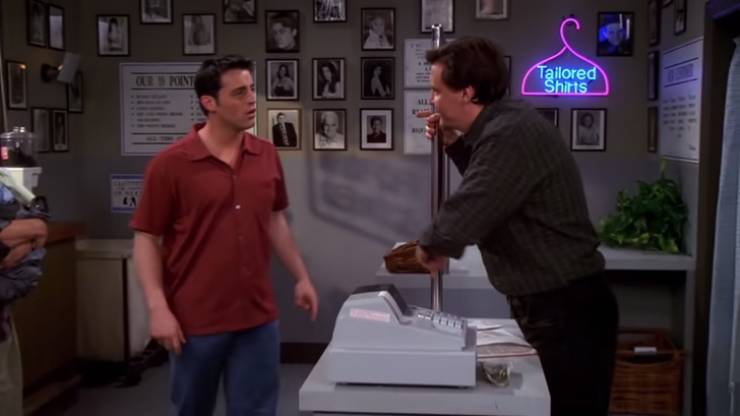 Joey asks to put his headshot next to the photos of other celebrities, but the worker says that he wouldn’t do it because, on Days of Our Lives, the Russians are shown as evil.

Joey says that Harrison Ford’s photo was on the wall even though he appeared in Air Force One where Russians were presented as evil too. The worker says he had never seen the film. The funny thing is, Ilia Volok was in that film, and he was one of the “bad Russians.”

The friends eat at a restaurant called Marcel’s. 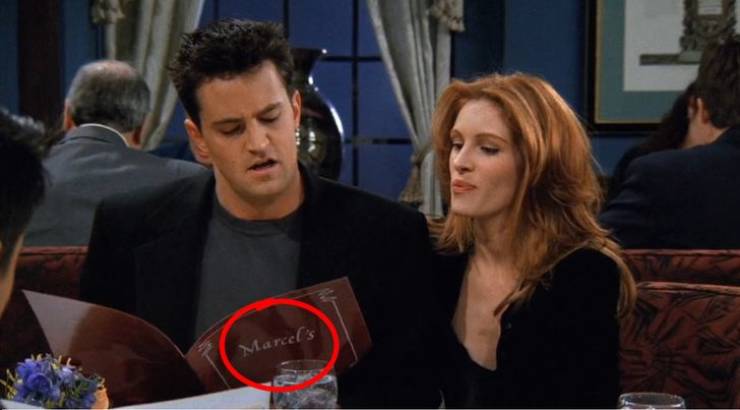 This was a sign of respect for Ross’s monkey that was no longer on the show but was still in everyone’s hearts.

A doll copy of Robin Williams’s character from Mork & Mindy was in Chandler’s bedroom. 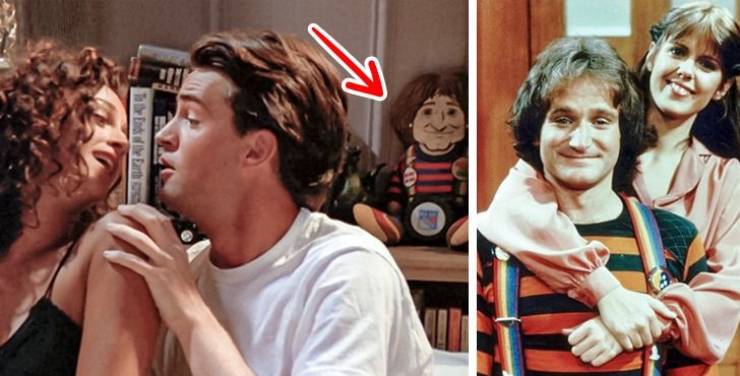 This show was on the air from 1978 to 1982. Robin Williams portrayed a funny alien that was sent to Earth. The doll is a sign that Chandler respects Robin Williams and his work.

Before Ross and Emily’s wedding, there is a copy of The Independent newspaper on the desk. 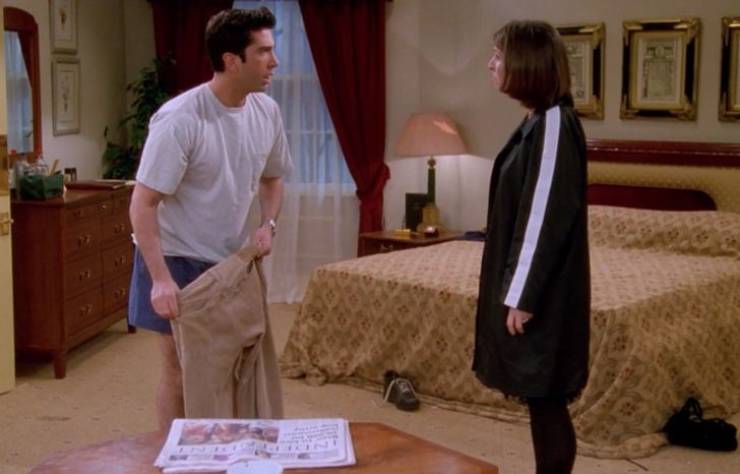 The name of the newspaper you can easily read is there for a reason. As you remember, there was an incident at Ross’s wedding that let Ross remain free and independent after the wedding. 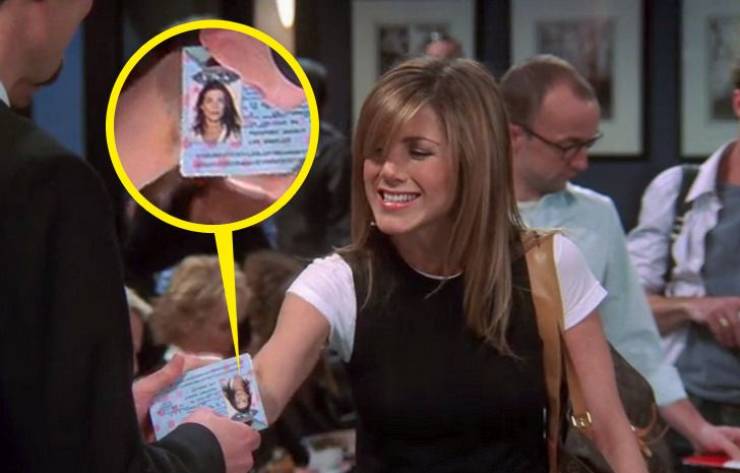 In the final episode where Rachel is going to fly to Paris, she couldn’t find her boarding pass, and then she gave the worker Monica’s ID. Maybe the creators did it for fun or maybe they wanted to show that she wouldn’t be able to fly anyway.

The airport has serious security problems — Rachel was actually allowed on board with someone else’s ID!