“Found a tiny vial of thick liquid with a bead inside. There were also 4 rubber things for your fingers and it was all in a sealed black foil packet. Any idea what it is?” 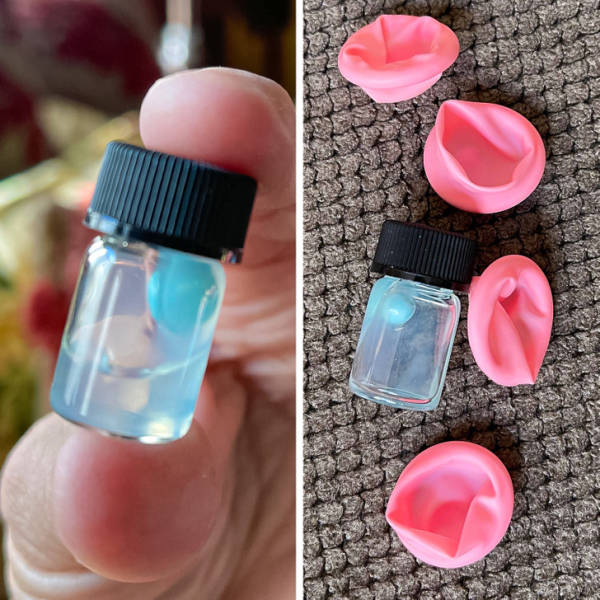 “I know exactly what this is!! It’s a lotion that comes with temporary tattoo kits. The little rubber finger covers are for applications.”

“Found this on the sidewalk in North Hollywood, CA after it rained. About 2.5 inches long. I didn’t touch it.” 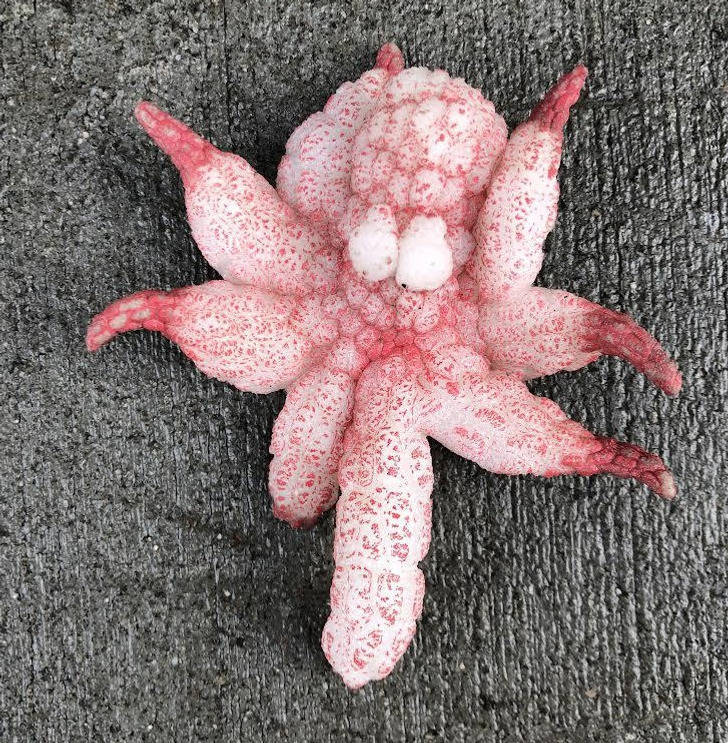 “It’s one of those little octopuses that you put in water and it grows. That one is after it’s been absorbing for a while and it’s drying out on the edges.”

“It came bundled in my order from AliExpress, but I didn’t order this. Opened it without noticing, but it’s hard and murky.” 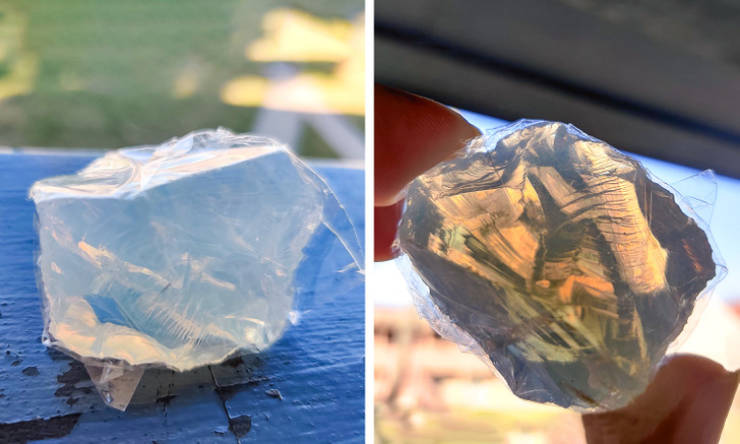 “It’s a metal sphere, brown plastic inside, and contains a glass-like cube inscribed with KK004.” 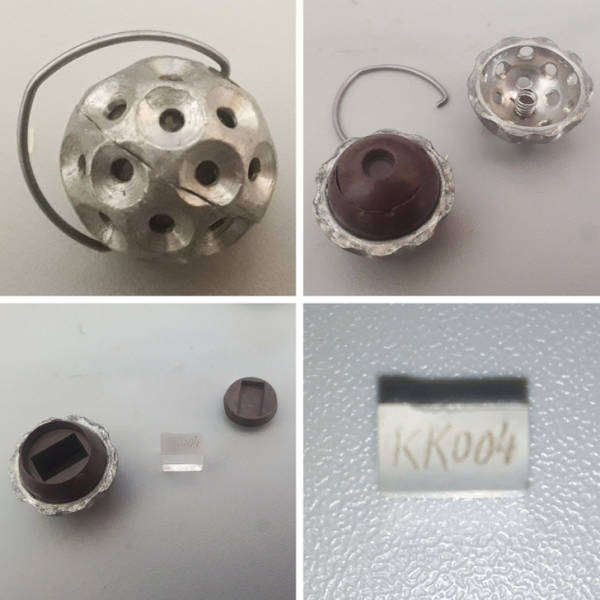 “Since this is a part of a mass-produced series, it could be that this was a detector to be placed in one of the many nuclear bomb experiments, and this would record the radiation incoming to a spot with its directional intensity. So that radioactive dust moving around would also make a recording, not only the primary.”

“An Art Nouveau-style hook made of silver” 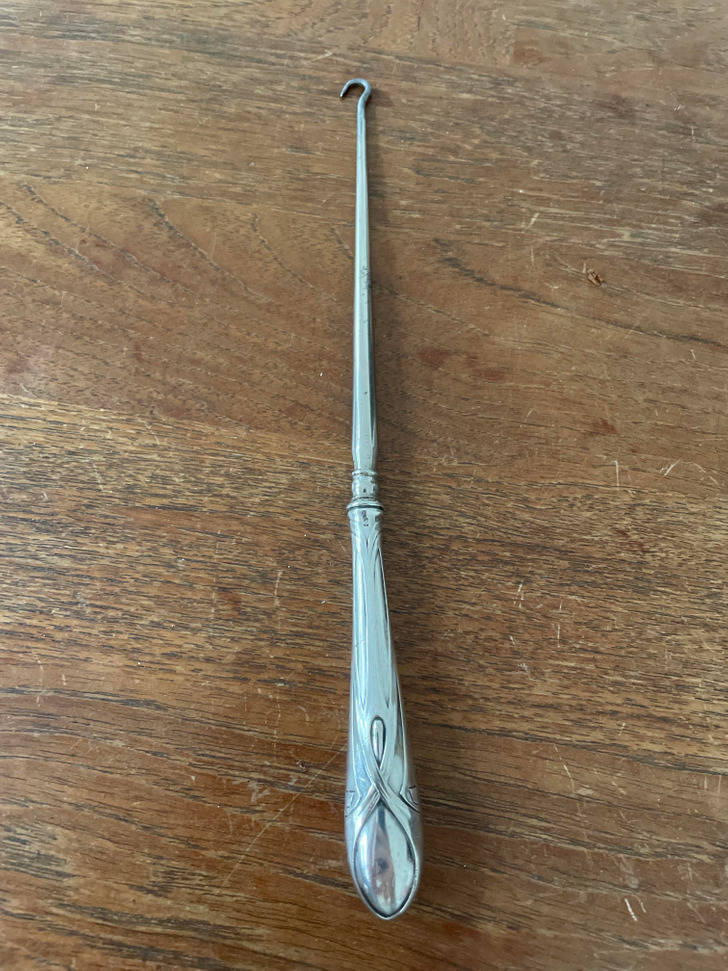 “Maybe a boot button hook that’s used to hook all those tiny buttons on ladies’ boots. Just a guess on my part.”

“What is this wooden plaque/tray with a metal(?) green insert found in a thrift shop?” 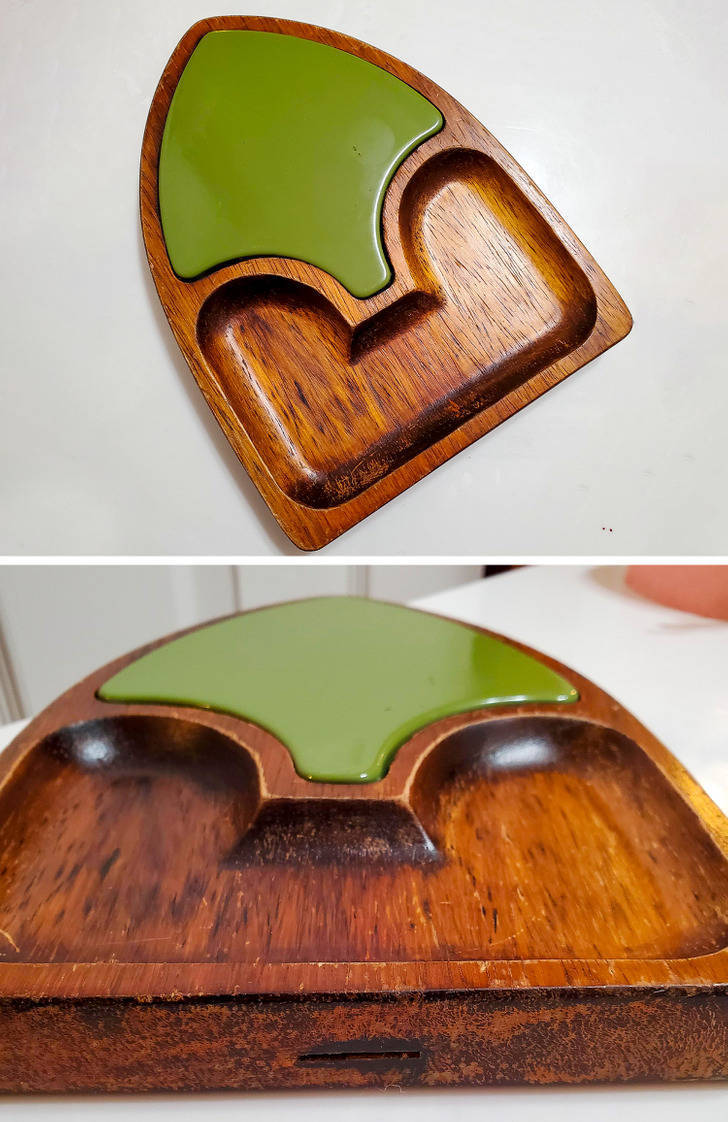 “Looks like a cheese board. Maybe the slot on the bottom edge is to store the knife.”

“What’s the purpose of this spoon? If you push the button on the end, the bowl bends 90 degrees.” 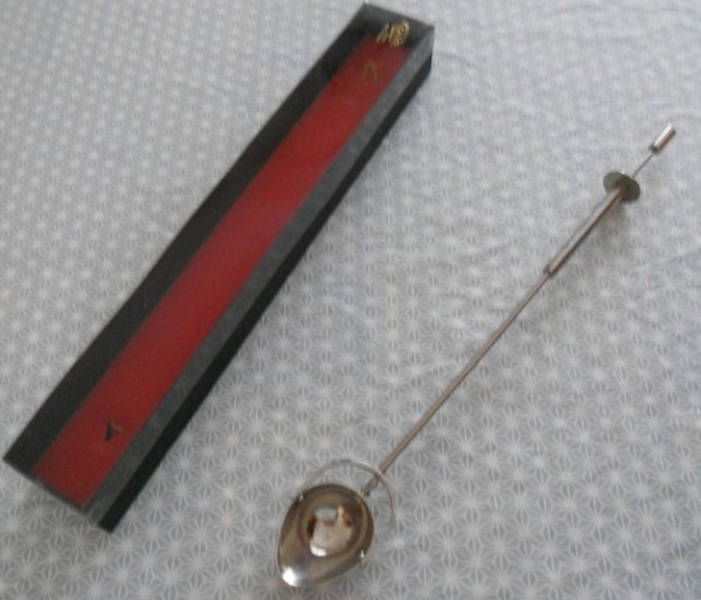 “A thing for scooping out olives or small round fruit from a jar?”

“What are these 2-inch long, bent metal hooks in a plastic vial?” 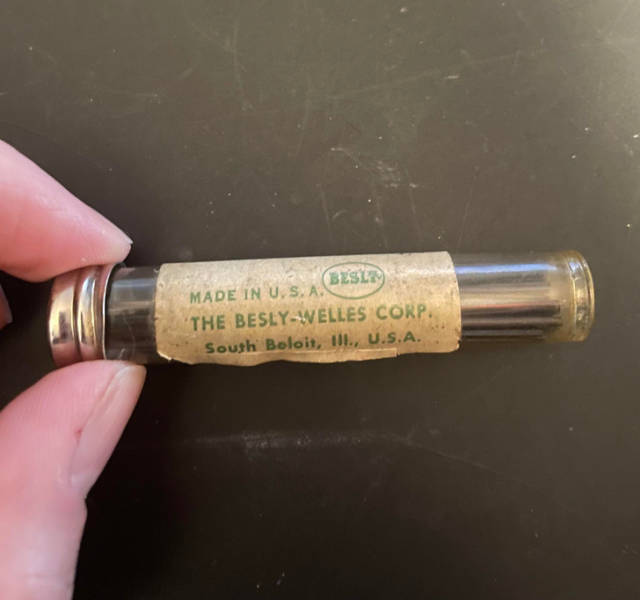 “They’re fingers for a tap extractor.”

“This was found on a beach in West Scotland. It’s a tight roll about 2 inches wide made of an extremely thin metallic foil.” 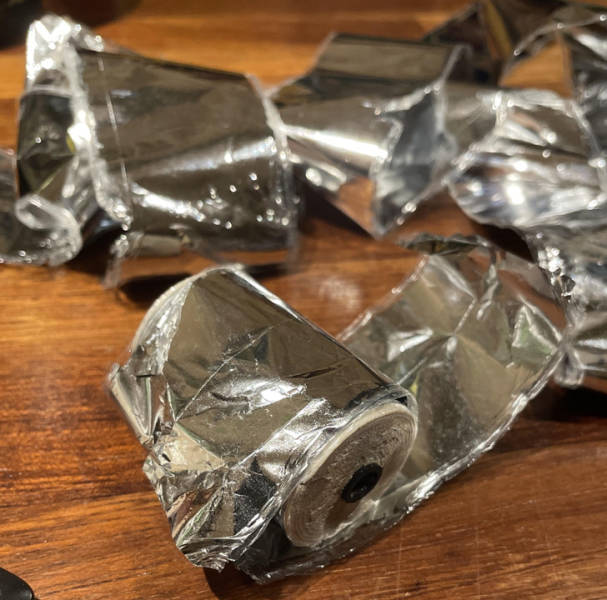 “Looks like the inside of an electrolytic capacitor. The paper spacer holds the electrolyte.”

“Found in the nursery, possibly a baby item? A turquoise plastic thing looks like a lid for something. I’m not sure if it belongs in the nursery. Likely not from a toy.” 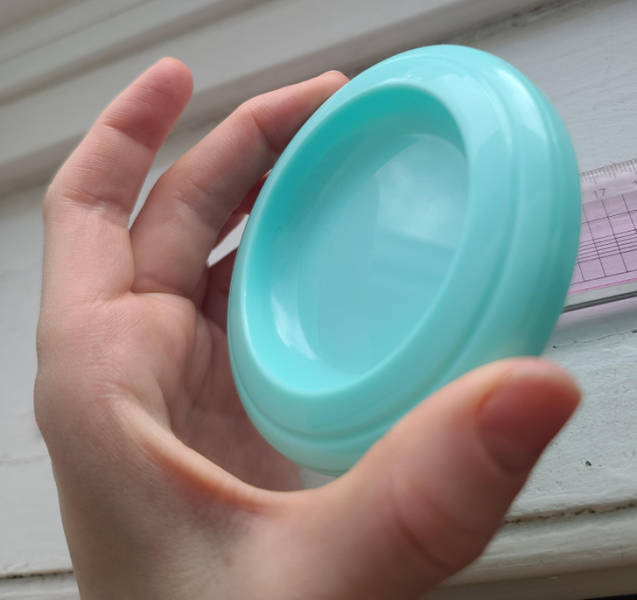 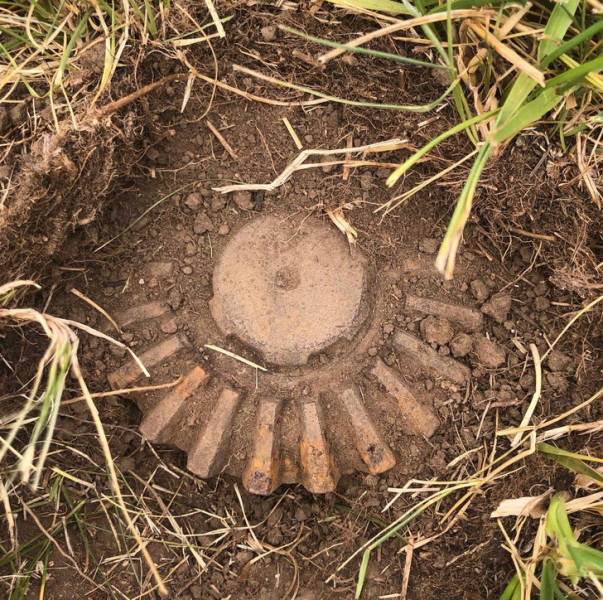 “The most likely answer: an axle shaft. Here’s what the inner end of an axle shaft and spider gear looks like.”

“Instead of the Valentine’s Day card he ordered, he received this in the mail! A white triangle net with wall fixtures…any ideas?!” 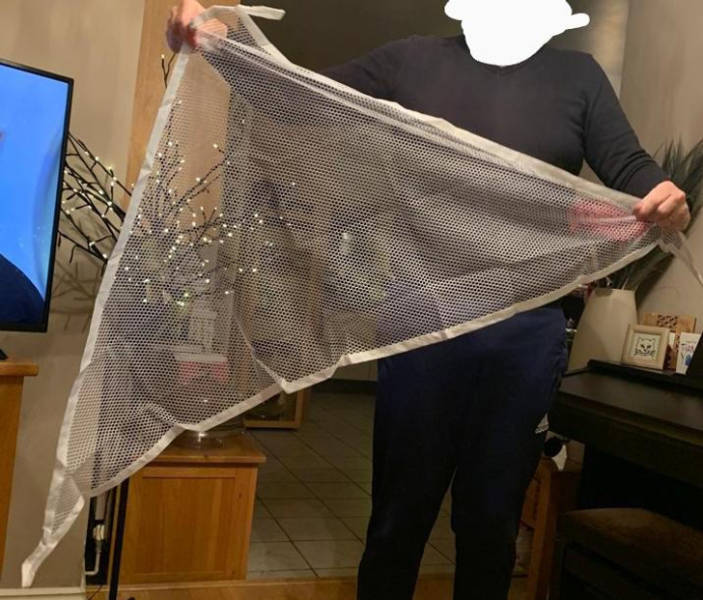 “It’s to put cuddly toys in, like a hammock.” 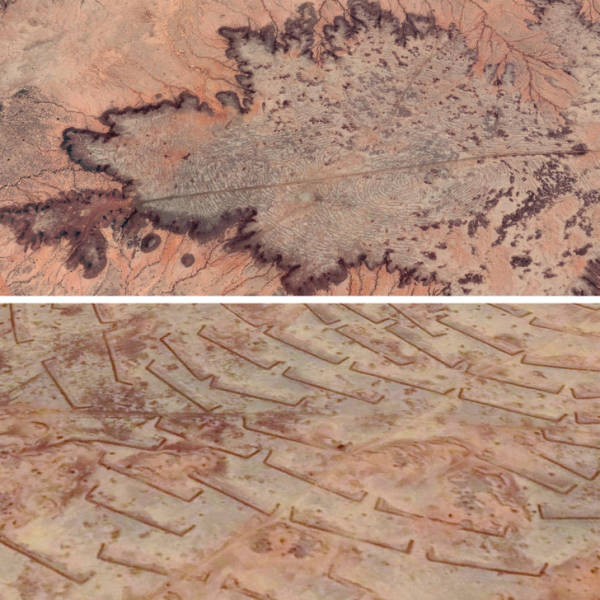 “Looks like they are trying to reforest the area. These are typical berms that they dig on hills to hold more water and prevent erosion until the trees get a hold.”

“Dutch origin, was told it’s a guide for cutting French beans. Approximately 3”. Not sure how to use it! What is this thing?” 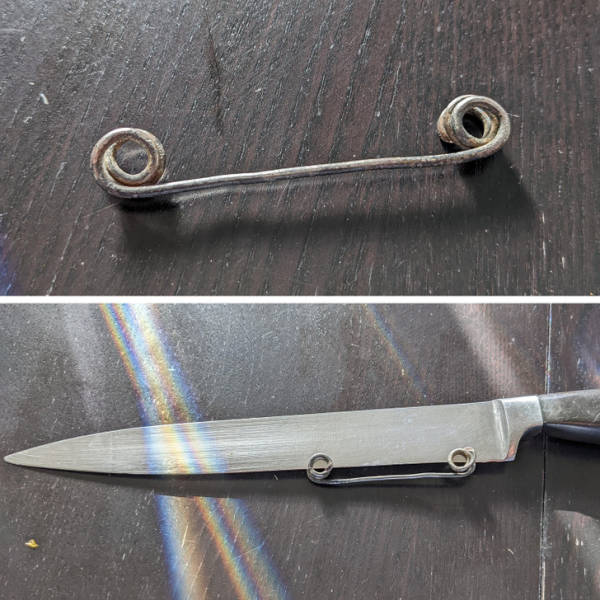 “Set a knife on the counter, as in pic. Push the bean against the blade, tip-first. The guide ensures you’re splitting the bean more or less in half.”

“A bendy rubber object found on the ground, no markings or writing. Bends at the middle easily. Roughly 3 inches long, paperclip for scale.” 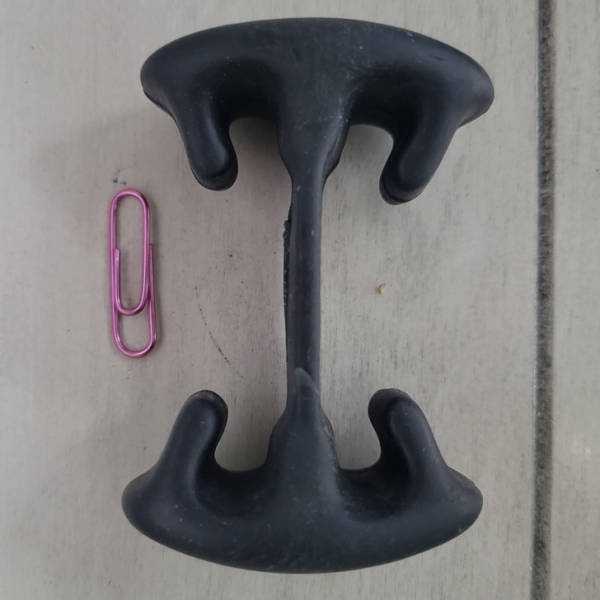 “They are ski bones. It holds skis together to make carrying a pair easier.”

“Found in a library toolbox: wooden handle with metal spokes, about 15 cm long. Can be tightened or loosened by ~5 mm but otherwise, the parts don’t move.” 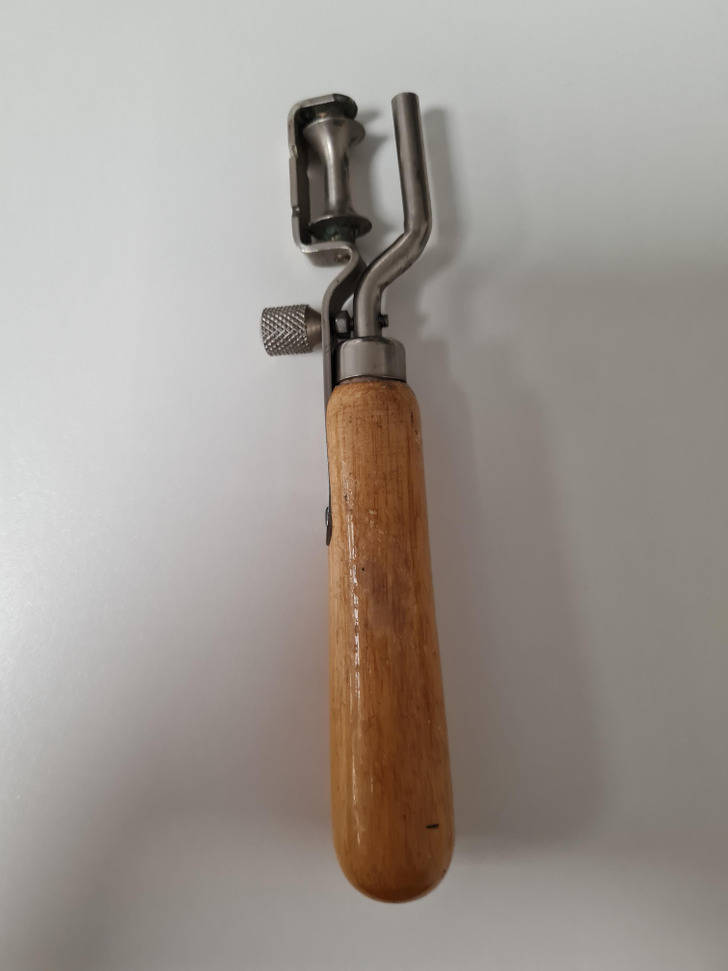 “It’s a type cleaner like this. Would love to say this with some insight but it was just a reverse Google image search since it’s such a distinctive-looking thing.”