19 World Attractions That Only Exist Because Of Someone’s Mistake 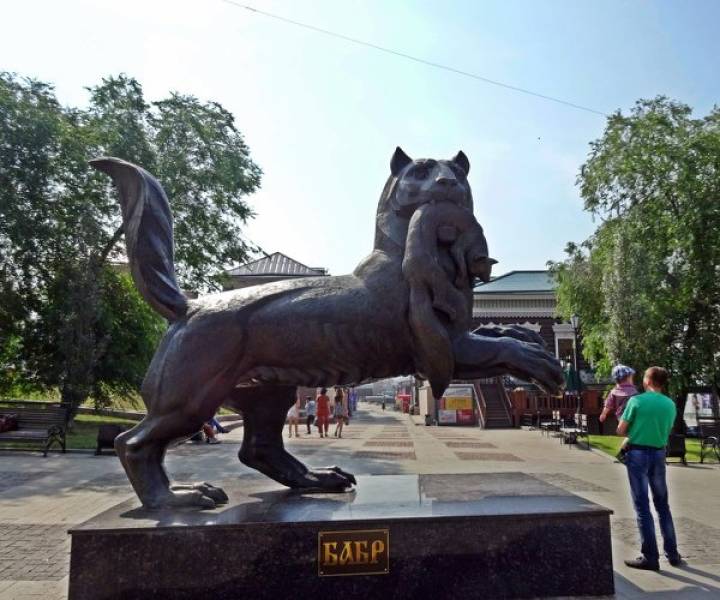 If you head to the centre of this Russian city, you’ll find an odd statue of a Tiger with a beaver tail and webbed paws, holding an oversized rodent. It’s really bizarre, and the story is pretty classic.

When this city first created its coat of arms in the 1600’s, it added an animal called a Babr, which what they called a Siberian Tiger. As the years went on, the tiger became extinct, and so did this local term.

In the late 19th century, officials in Saint Petersburg decided to redraw their coat of arms, but were baffled by the strange, foreign looking word, associated with what looked like a tiger. Thinking that someone had accidentally misspelled bobr (beaver), they thought they had to concoct an an entirely new animal. Hence, a beaver/tiger hybrid, holding a sable, with a confused look on its face. 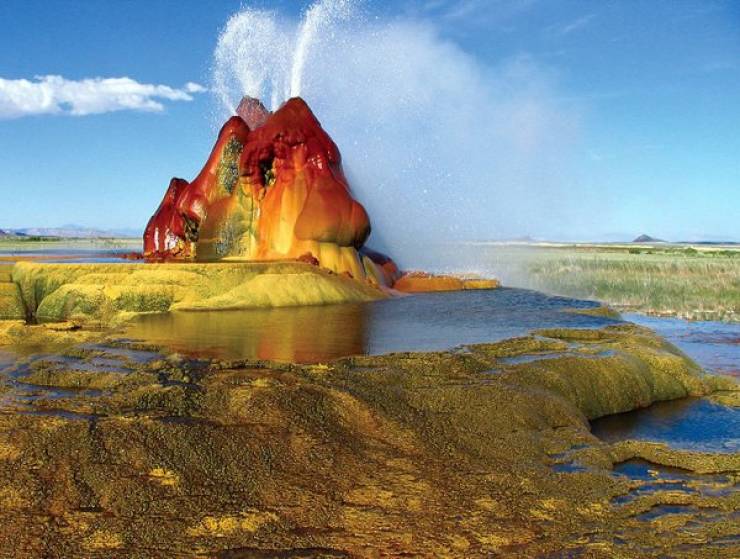 There’s an alien-looking geyser on the edge of the Black Rock Desert, and it’s entirely our fault.

A hundred years ago, there was an effort to build a ranch and make the desert usable for farming, so they dug a well, but hit geothermal boiling water instead. This wasn’t good for irrigation, and it was abandoned, creating a small geyser.

Then, in 1964, a geothermal energy company drilled a test well at the same site, but the 200 degree water wasn’t hot enough for them. They supposedly resealed the hole, but it didn’t hold. Over the next 40 years, the minerals from the geothermal water pocket have created deposits on the desert surface that make it look like an alien mound.

On top of that, there’s algae that lives off of the hot water and minerals, that gives the mound a distinctive green and red hue. 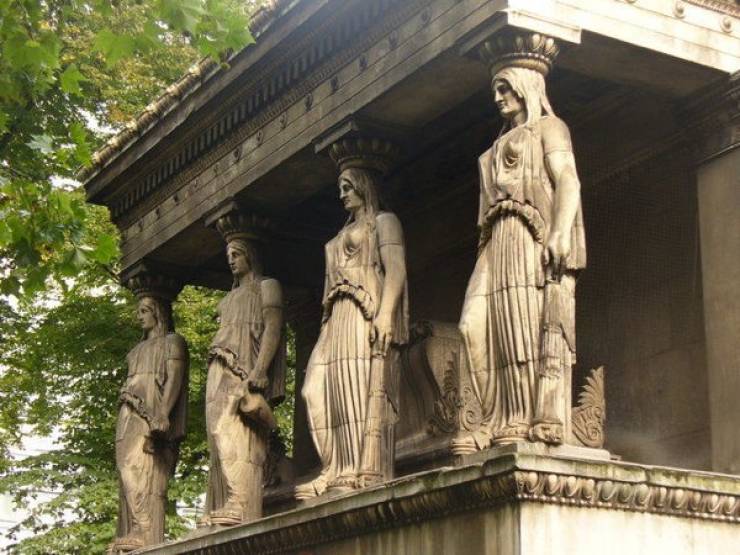 On London’s St. Pancras Church, there are some odd statues, and it’ll take a while to figure out what’s wrong with them.

Back in the 19th century, a sculptor was asked to make 8 caryatids (sculpted female figures that serve as architectural supports), out of Coade stone.

He spent 3 years sculpting them, only to find that he made them too tall to fit between their platform and the roof. So he cut off a part of their torso, making the statues have disproportionally long legs. 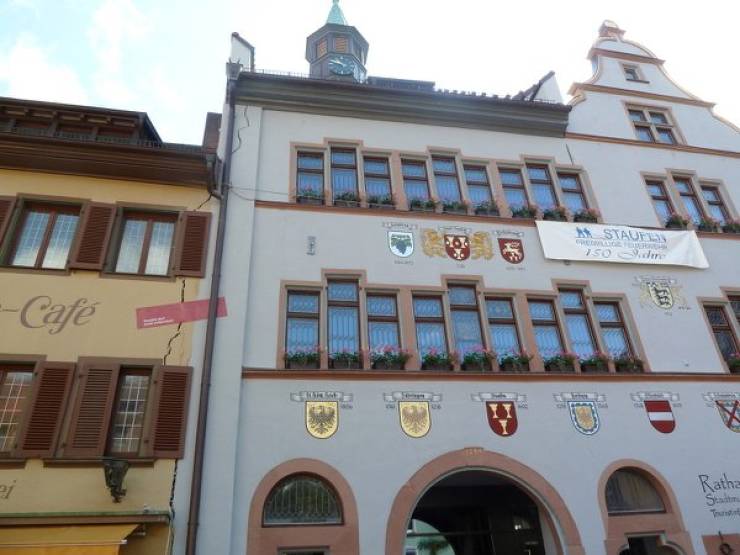 This gorgeous town, known for its colourful buildings, is falling apart. Dating back to the 16th century, now over 270 different buildings have wide cracks running through them, and even 2 had to be torn down for safety reasons, costing the town over 50 million Euros in damage thus far.

The reason for this is pretty stupid. In 2007, a geothermal operation broke into a layer of water, and a layer of something called anhydrite. Mixing the two, caused the ground to swell up by 5 inches, and literally destabilized every single building in town.

Now, it’s an attraction for us, and an ongoing headache for residents. 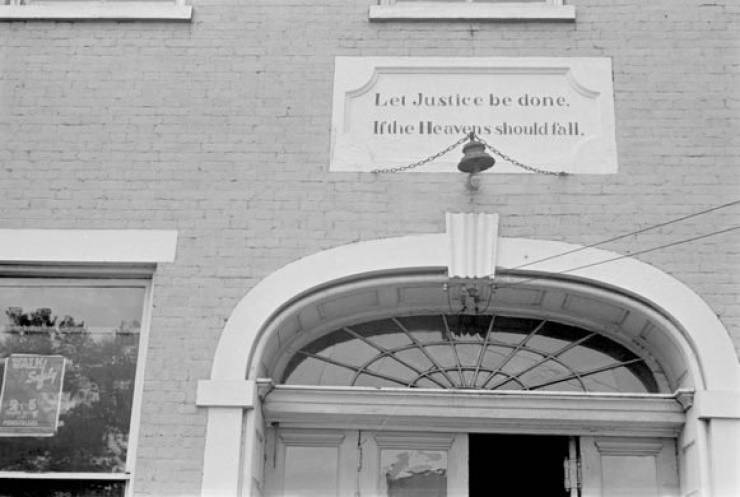 This building is notable for being a gorgeous, Federal-Style building and for having a grammatically incorrect inscription over the doorway.

For over 200 years, this clunky phrase “Let Justice be done. If the Heavens should fall.” has perplexed residents. Technically, that first period should be a comma, and I’m not sure why someone hasn’t gone up there with a chisel, and made the change. 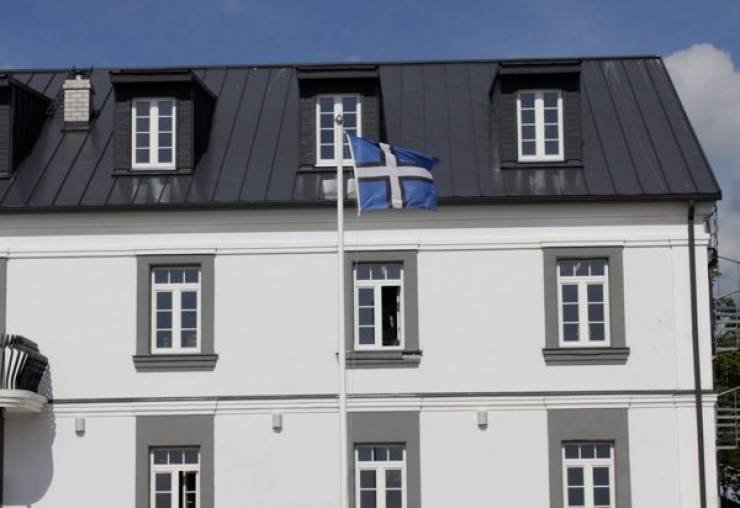 This random Kingdom was formed back in 1992, right after Estonia gained independence from the Soviet Union. At that time, the new government was establishing a constitution, and the civil servants just forgot to include one of the two municipalities that sat at the end of a peninsula on an island.

So technically, those 500 residents weren’t a part of Estonia. So they started their own country, called it a Kingdom and offered the throne to a local journalist and activist. He ruled for a year, before Estonia clawed that land back and rewrote the constitution to include them.

But to the residents of Torgu, they still consider themselves a Kingdom and fly their own flags outside government buildings. 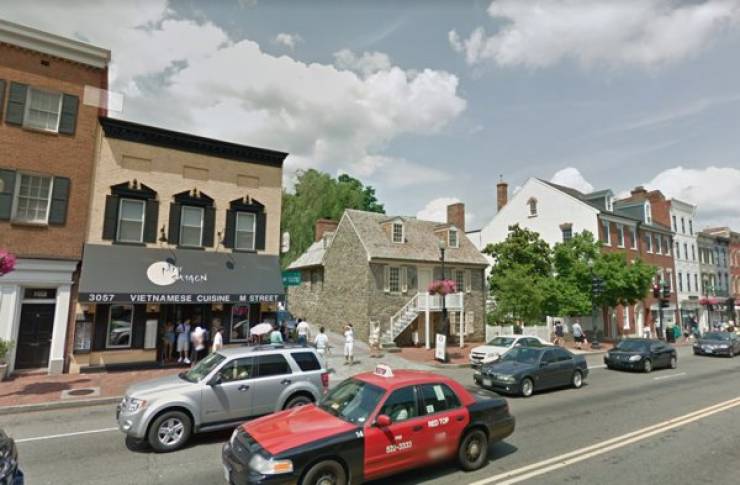 On one of the busiest commercial streets in Washington, is this old stone house. Built in 1766, back when Maryland was still a colony, it’s one of the oldest surviving buildings on the East coast. During all of that time, there were rumours and legends that it once held Suter’s Tavern and was General Washington’s Headquarters while he surveyed the city in 1791. So, in the 50’s, Congress purchased the home and made it a historical site.

Years later, a Capital Parks historian did some research and discovered that it wasn’t Suter’s Tavern at all. That building was 4 blocks over, and demolished in 1907 for a trash incinerator. This was just an old house. But, it’s still cool museum and relic of the past. 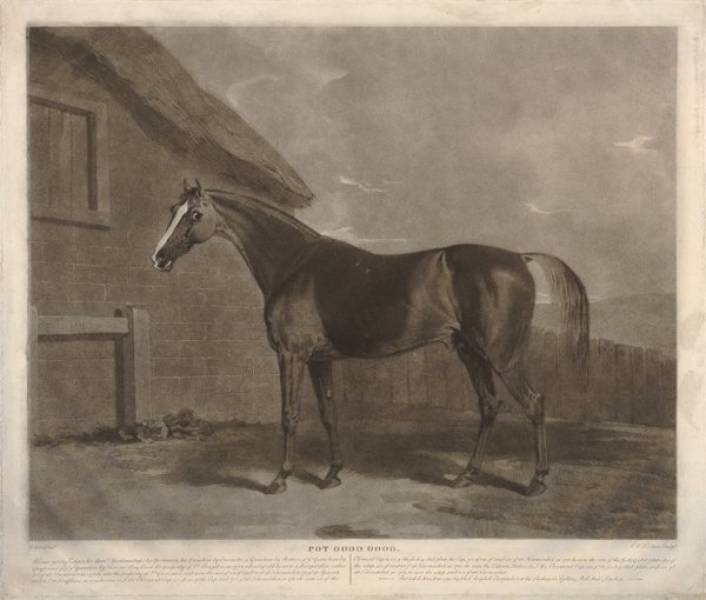 I know, cool name, right? It’s no surprise that racehorses get unique names, but this one is pretty odd. In 1773, a chestnut colt with a blaze was born. His owner, the 4th Earl of Abingdon, wanted to name him “Potatoes,” and told a stablehand to write the name on a feed bin.

Except, the stablehand thought his boss said “Pot-8-O’s,”, so that’s what he wrote. The Earl was so amused he kept the name.

Potoooooooo went on to have a successful career, retired, and became a prolific stallion, siring over 100 winners. 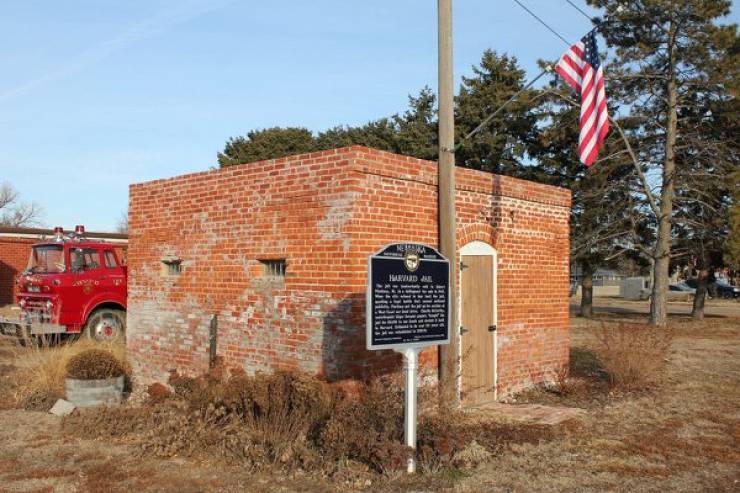 In 1943, this city accidentally sold its jail to a 16-year old for $1.50. Originally, he was looking for some land to buy and noticed that the jail was included on the list of properties for sale. He told the city about their mistake and they told him to f@#k off. So he bought it.

Even after he had the deed in his hand, the city refused to admit their mistake and still housed criminals in the jail. So he sued them for rent, and they still tried to d@#k him around.

Later, he tried to sell it, but according to the law, he couldn’t sell property until he was 21, so he put it up at a war bonds auction and the famous ventriloquist dummy, Charlie McCarthy, bought it for $10K in war bonds. 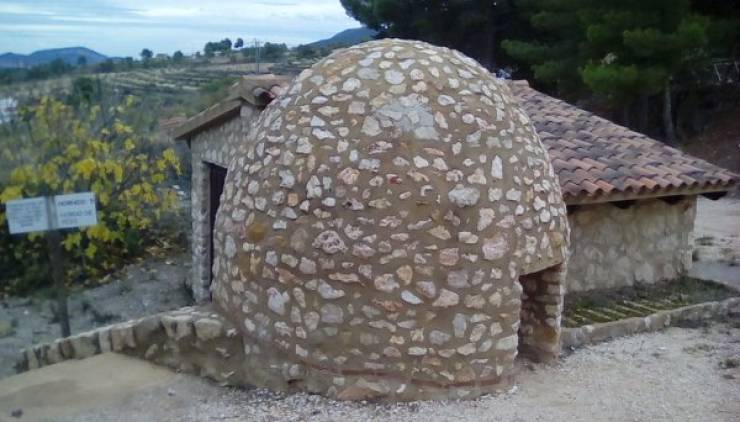 This is a preserved 19th century industrial complex situated on an ancient gypsum quarry. The furnaces on site were used to dehydrate the gypsum to produce the plaster used in building construction and religious statues.

At the start of the 21st century, the government of Valencia decided to carry out a restoration project to make this a tourist and educational site. They spent over 280,000 Euros on restoring the furnaces, buildings and making a small visitors centre. Then, they learned that the site was actually privately owned.

So, they spent the money, but can’t take credit for it, administer the site, or make any money from it. The actual owners, though, are very nice though, they let people wander the site to learn about the history. 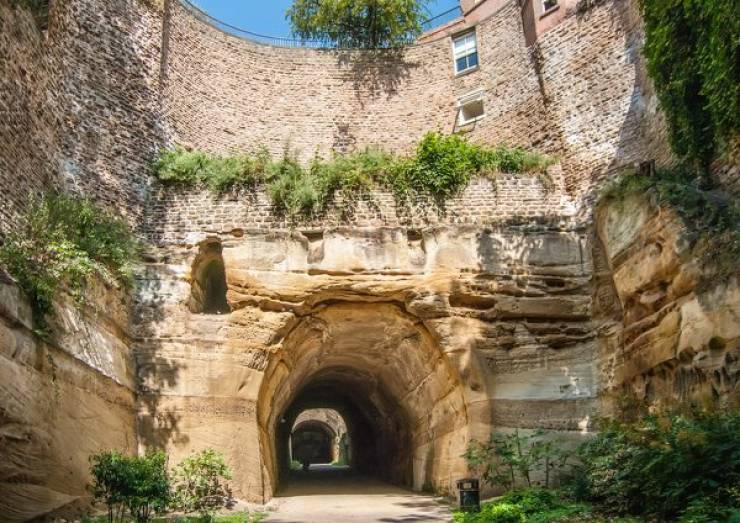 Hidden in an office parking lot, is an entrance to a sandstone passage that travels beneath the city. Built in 1855, this was supposed to be a tunnel to access an an exclusive Victorian residential area, but due to a mistake, nothing happened with it.

In the 19th century, a Duke wanted to turn some of his land into an exclusive residential development of palatial houses. So, houses were built, and a tunnel was commissioned, to be the grand entrance.

Except, it was dug at an incline that was too steep for the horses and heavy carriages of the day to navigate, so it was abandoned and a new entrance was built elsewhere. 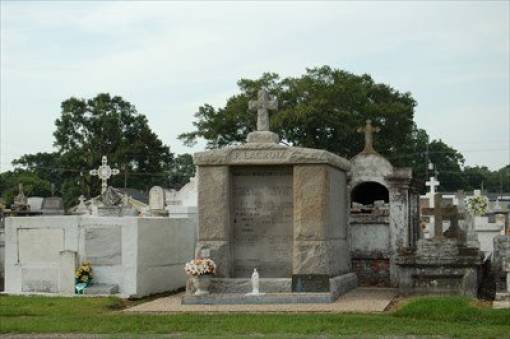 In traditional cemeteries, the bodies are buried facing east (feet to the east, heads to the west). This was the tradition for centuries. Now, both secular and religious cemeteries have abandoned this layout for whatever is most efficient, for the older sites, it’s always an East focus. Except here.

Here, it’s all backwards, with the plots facing north-south instead. Why this was done, no one really knows. Some blame a gravedigger who was confused. Others say that the above-ground plots were relocated in 1880 to move the town closer to a rail line, and everything was mis-laid wrong.

Still, it’s an oddity in America.

The Can Opener Bridge 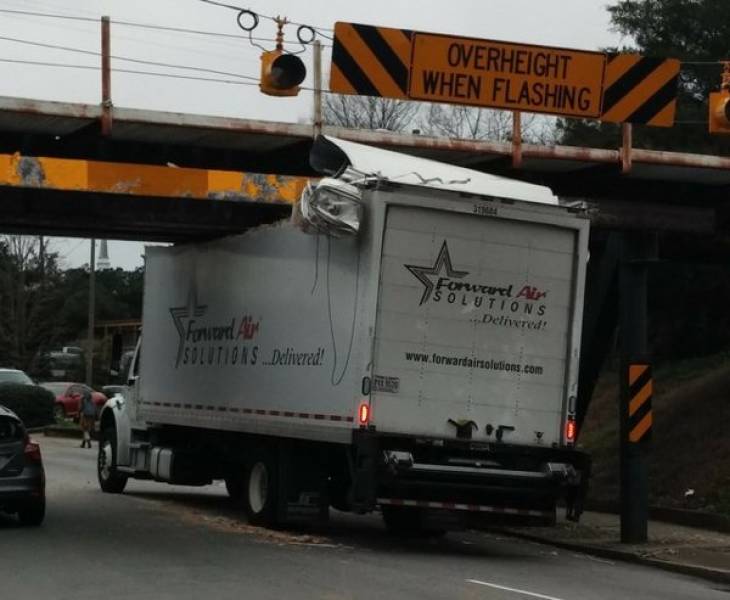 I’m sure everyone knows about this one. Whether it’s a f@#k up by the guys who built it, or the truck drivers who ignore the posted signs, this bridge had taken down far too many trucks

Back when the railroad trestle was built, there were no standards for height, so it was made to be 11 feet, 8 inches; 2 feet below the current clearance standards. As for why it’s been taking down a truck/month for a long time, it’s because the railroad doesn’t want to stop trains for long enough to raise the bridge, and below the road lies a 100-year old sewer main. So it’s a rock and a hard place indeed.

Finally, this year, the City of Durham forced the railroad to close for several weeks while the bridge could be raised 8 inches. Except, it still just f@#ked up a truck.