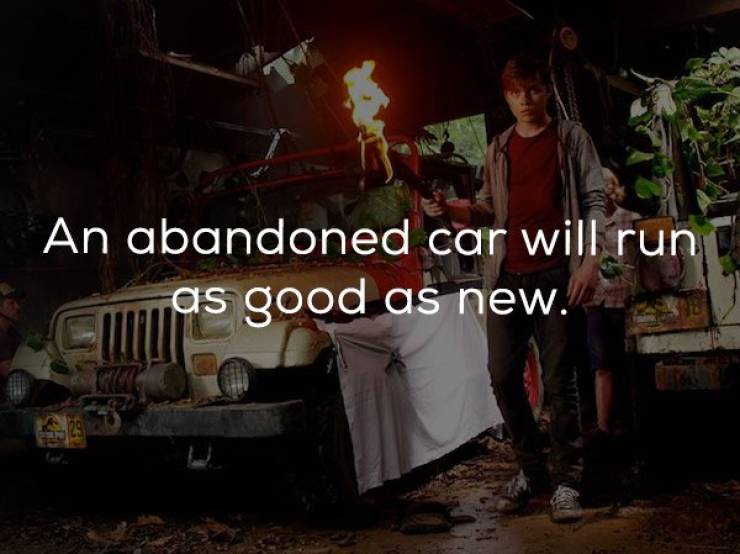 If a car has been left neglected and sitting in a garage for over 20 years, it’s no good any time soon. No amount of new gas, batteries, transistors, plugs, etc.. will bring it back to life on a movie timeline. That takes months and a complete overhaul. 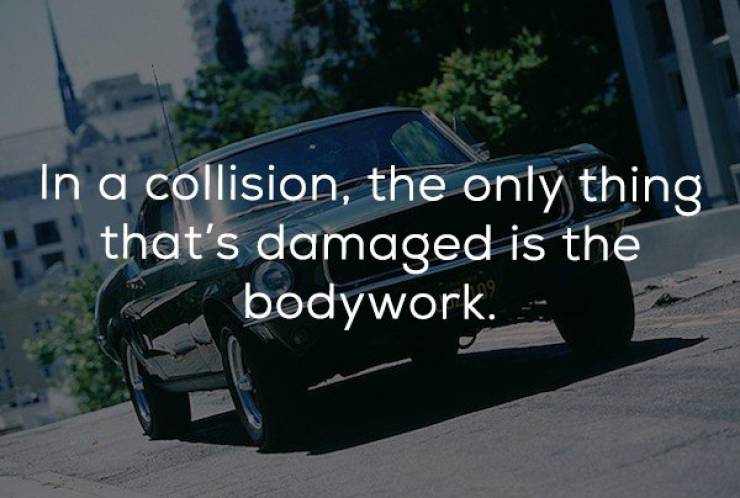 This is one of the biggest leaps movies make. If a car goes off a huge jump, or lands hard on the ground after a hilly car chase in SF, or even if you get sideswiped, a new coat of paint and bondo isn’t gonna fix it.

Odds are you’ll blow a tire, crack a suspension, misalign your steering or fuck up your engine. No real world car can live through a movie car chase, and drive away clean. 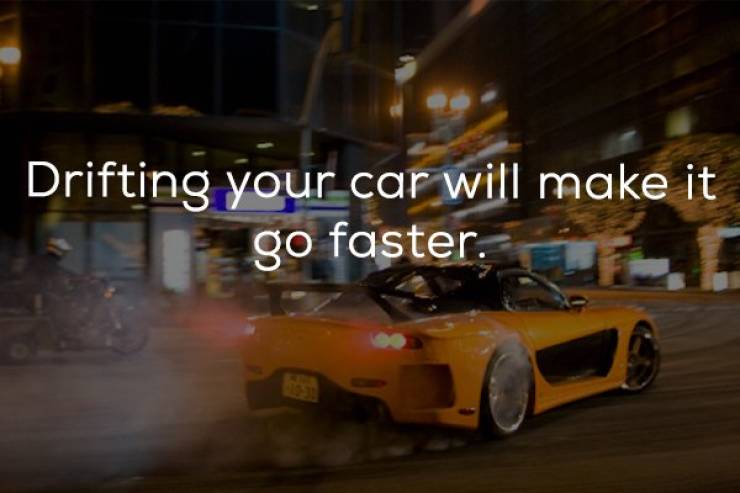 The Fast & Furious movies get this wrong. Drifting actually slows your car down. That’s why it’s not actually ever used in racing. 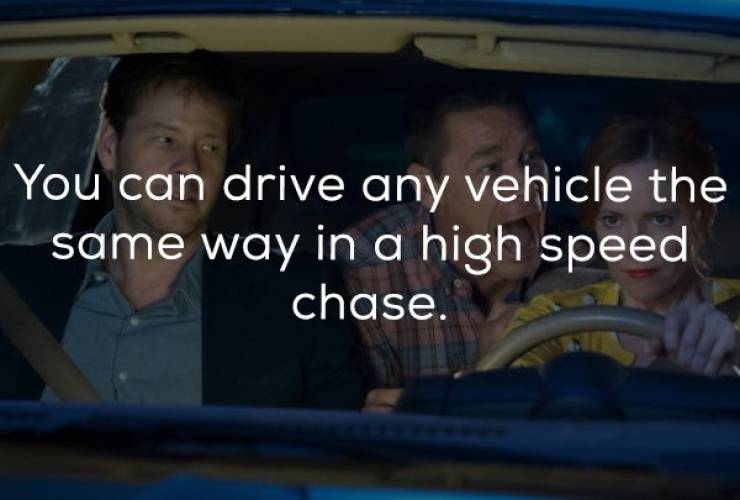 You can’t drive an SUV like you’d drive a sedan. You’ll flip. And yet, movie’s will show a Suburban not only catch up to a sports car, but also manage the same turns and twists without flipping over.

In reality, you can’t drive a stock SUV like a lambo. 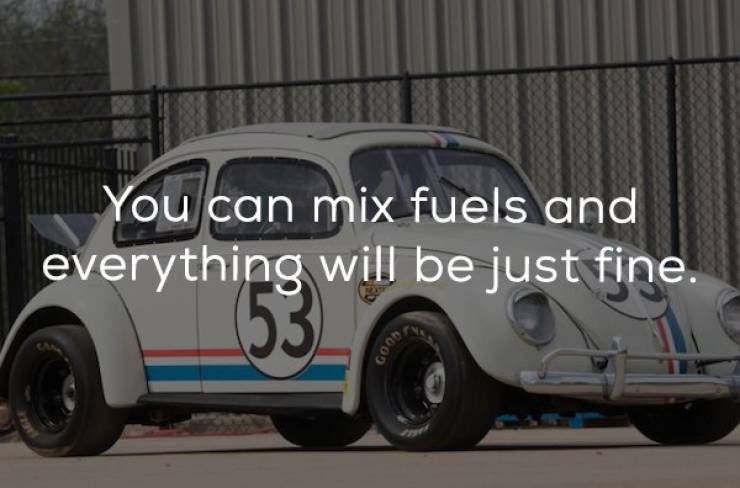 Movie’s will tell you that if you mix your gas with rocket fuel, nitrous, or alien gas, you’ll go faster.

It takes more than a super fuel to make a car go zoom; engine performance is a huge part of that too. 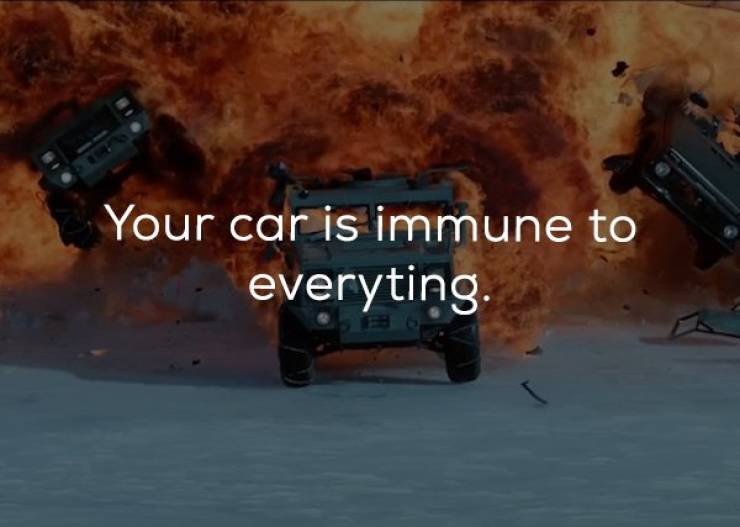 Movie’s tell you that your mom’s Camry sedan can handle a washed out road, in the middle of a hurricane. Or that the family minivan can handle an oily or icy road. That’s a hard no. 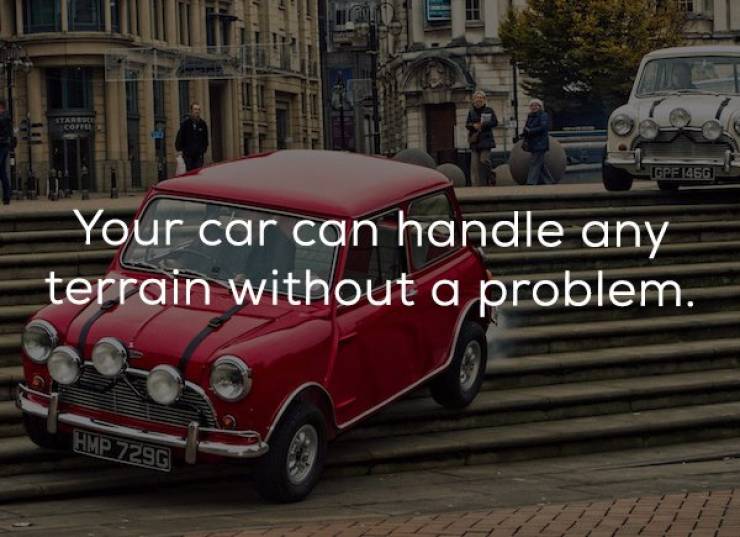 Vin Diesel and Co., and the rest of Hollywood, will try to convince you that average sedans and sports cars can take on grassy fields, dirt roads, muddy trails and stairs.

Your undercarriage will disagree. 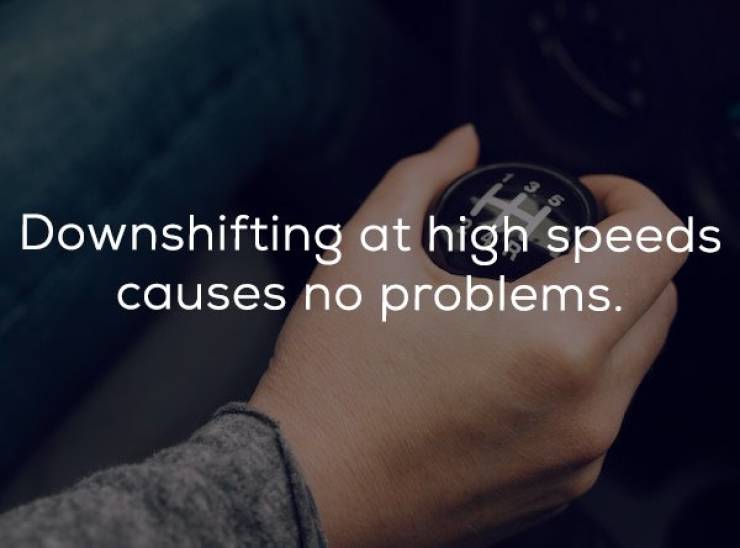 Most movies with a race or car chase will show them dramatically downshifting to take a turn. Most mechanics will tell you that shifting to a lower drive at a high rate of speed isn’t safe. It also won’t really do shit for your performance and will damage the car. 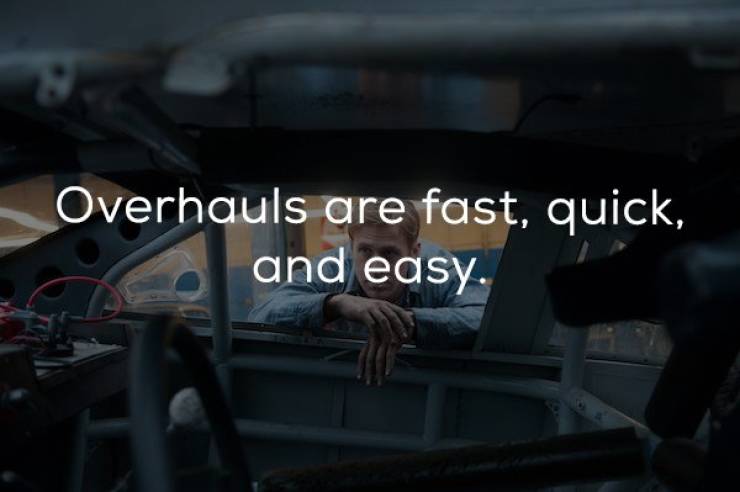 You can’t turn a basic car into a speed demon, overnight. It takes a team. Just upgrading an engine and the inner workings of a car is a full day or two, by itself, not to mention the rest of the car, the bodywork and all the other things it’ll need. 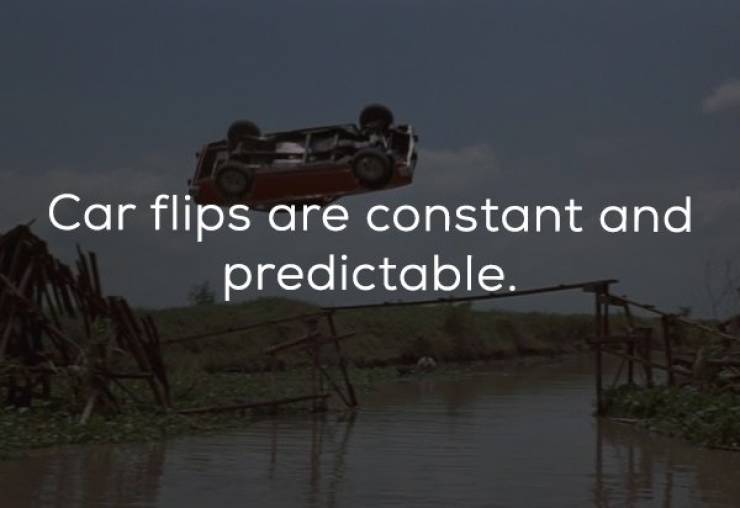 It takes a lot of speed and velocity to launch a car, and then you can’t even predict which way the car’s gonna go, how it’ll land, and even if it’ll break a part mid air.

The laws of physics exist for a reason, folks. 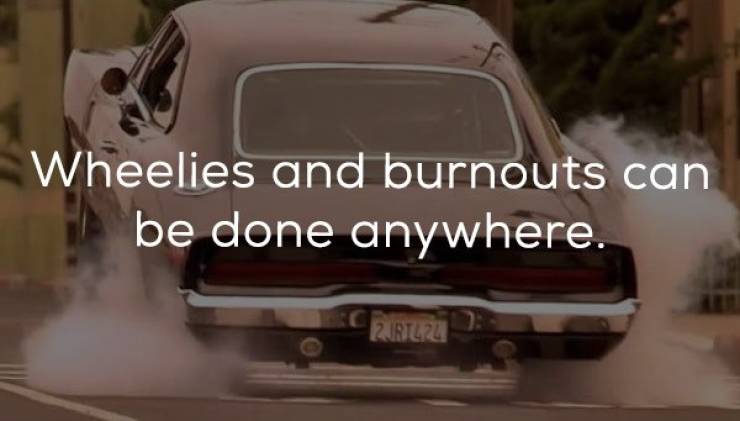 While these look impressive and intimidating, it really can’t be done. It takes a lot of traction to do a wheelie, but a burnout causes a car to lose traction. So it’s one or the other. To do both from a parked position is nearly impossible. 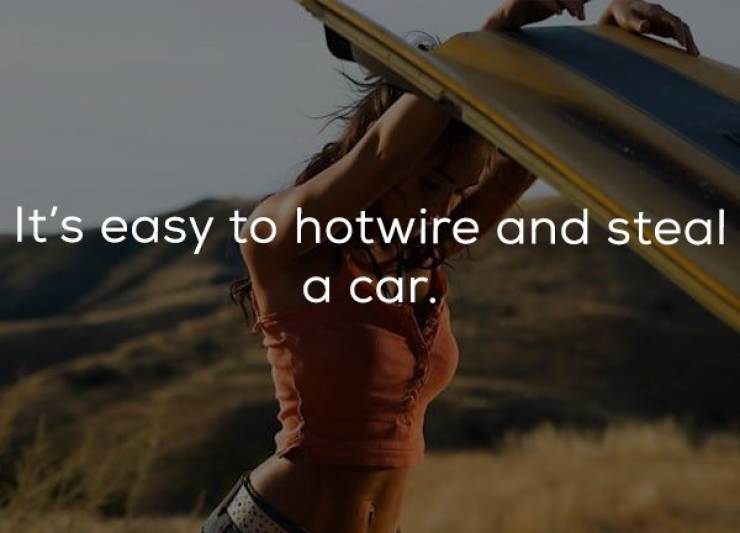 This is pretty obvious. You might be able to steal an older car by cracking open the steering console, twisting some wires together and jamming a screwdriver in there, but who want’s to steal a 1986 Yugo? I don’t.

Today’s cars are far too smart for this crude plot device. 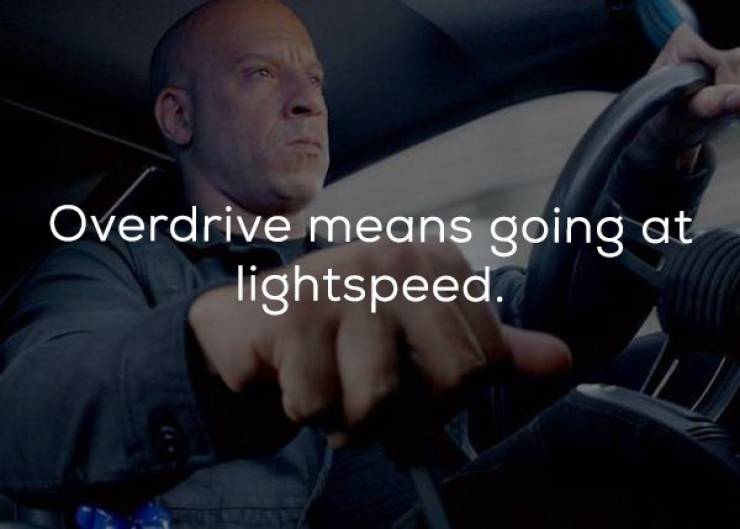 Some racing movies have a character going full speed, then the somehow kick it into overdrive and go even faster. This’ll lower the engine RPM’s to just keep the engine moving at the highest efficiency, and might even end up costing you speed. 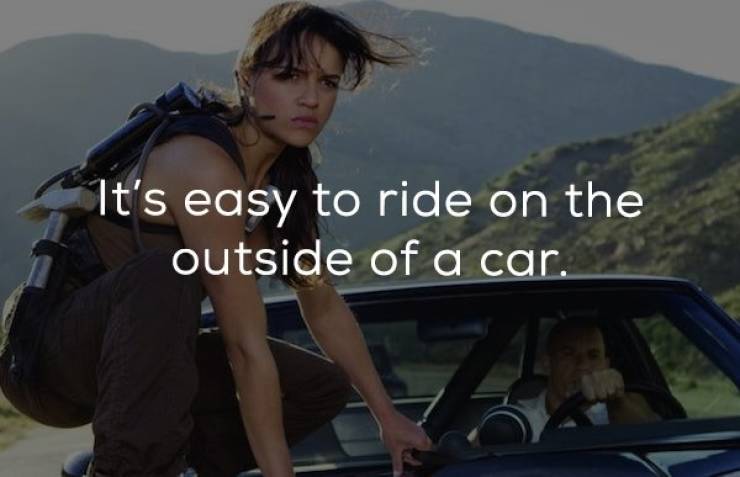 It’s insanely hard to get a grip on a car going 30-40 mph, without magnetic hands. A simple curve will toss you off, not to mention if you get bumped or accidentally lose your grip.

The same goes for the undercarriage. Indiana Jones did it in Raiders, but in reality, dust, potholes, scalding exhaust pipes, and debris will getcha. 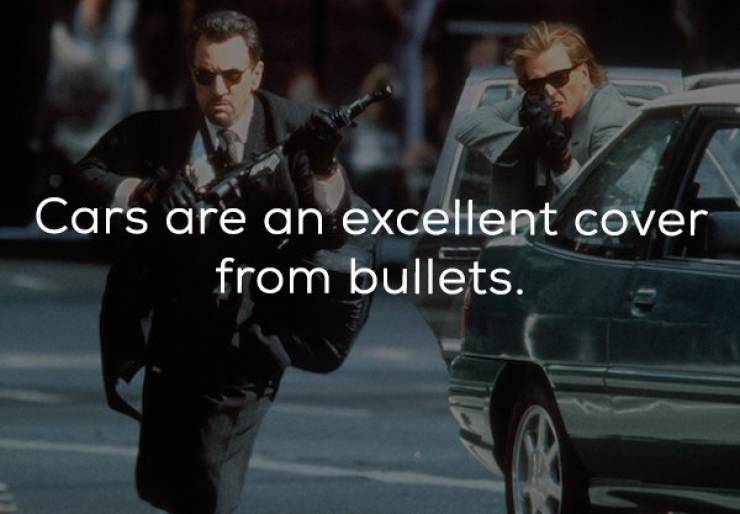 Mythbusters proved that a car door will not stop a bullet. A car’s body is not as tough as the movies will have you think. 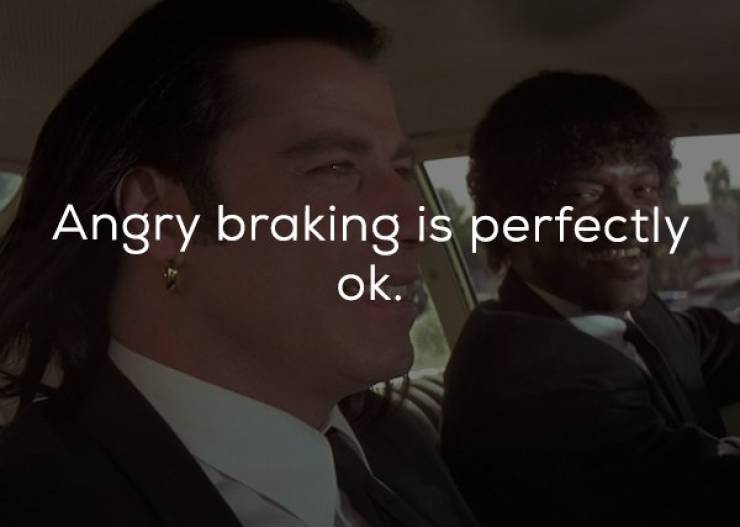 You know the scene; two people arguing and someone just suddenly slams on the brakes? It’s not safe. This’ll put a strain on your car and most importantly, it won’t give someone behind you enough time to stop. 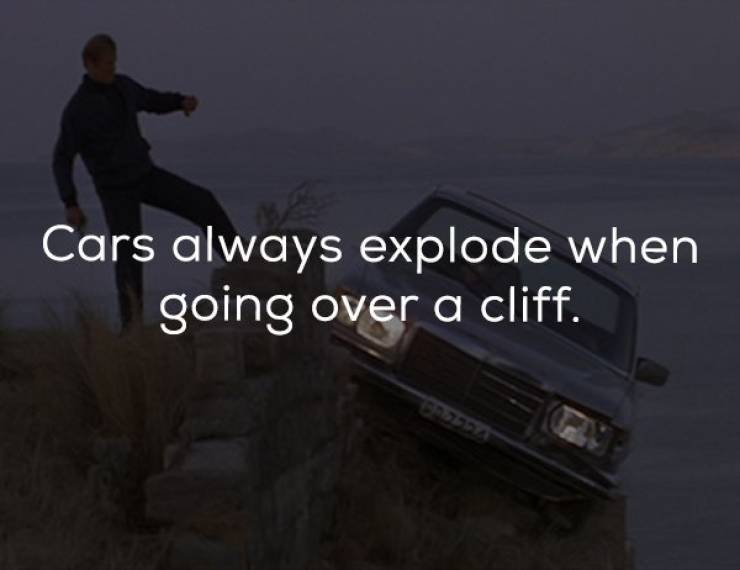 According to Jamie and Adam, this might happen one in fifty times, where a car will do a flip or two, hit a few boulders and then explode on impact.

The car will just hit the bottom and sit there like a sad and twisted lump of metal. No boom. 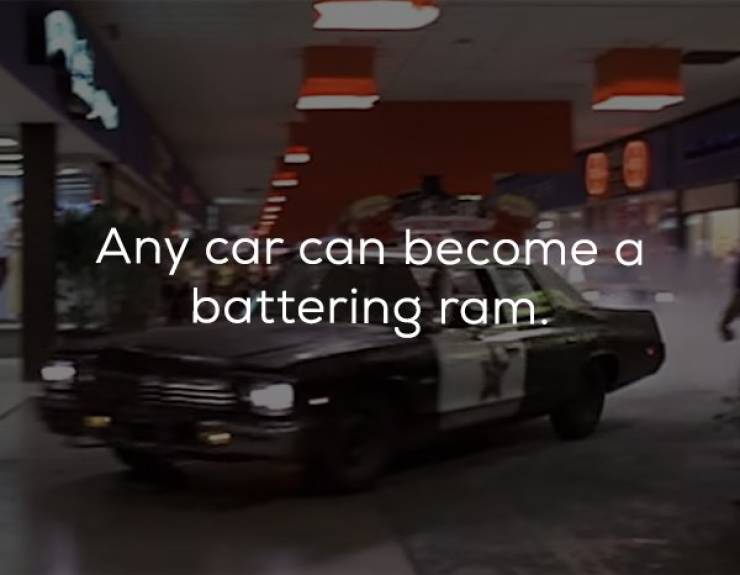 You’d be surprised how much resistance a window, plywood barn siding, or chain link fence will give your car. You’ll need a body shop and an expensive mechanic after you even try such a thing. 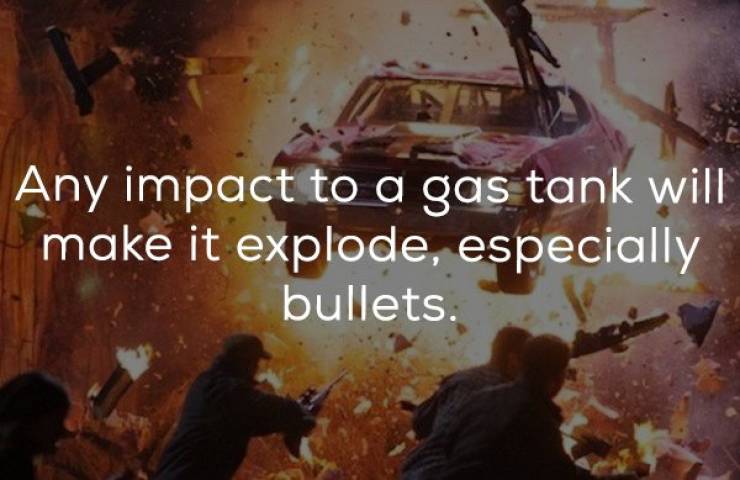 Gas tanks are’t as fragile and explosive as movies would have you believe. I mean, they’re still dangerous, and can explode under certain circumstances, but you can’t just shoot a bullet at a gas tank and watch a car erupt in flames. That’s not real.

If fuel was that easy to ignite, we’d never use it in our engines. That’d be incredibly unsafe. 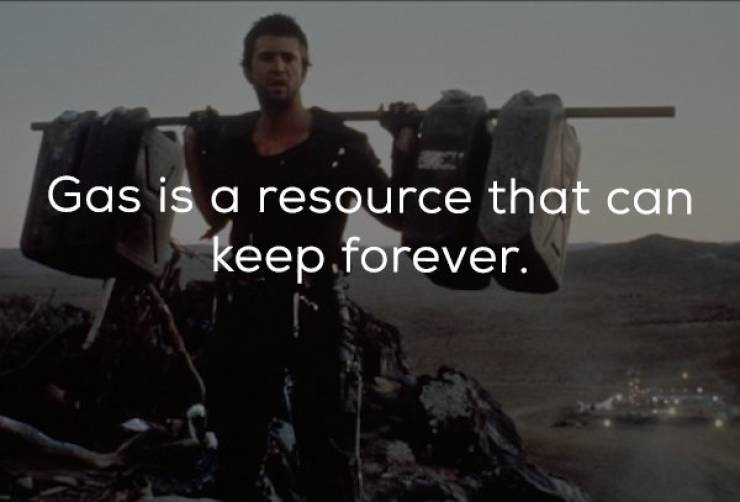 Gasoline is a refined product. It can actually go bad, if not kept properly. Even then, properties like Mad Max, The Walking Dead & Lost wouldn’t actually be able to use any gasoline they find, because it would have gone bad.

Previous Weirdest Things You’ll Only Find At The Thrift Shop Vol.27
Next Sprinklers Turn Japanese Village Into A Giant Fountain