“Bruce Willis. Not earlier in his career, but the last twenty years have just been the same grumpy old f@#k trying to say as few lines as possible.

“Wow can’t believe Mark Wahlberg hasn’t been mentioned! He even does the same facial expressions in every movie.”

Don’t get me wrong, I think he bring a lot to pretty much anything I’ve seen him in, but he is always that bad @$$ bad guy who gets killed.

But damn had he had some cool action sequences!”

“I remember reading that Sean Bean dies in everything he appears in because it’s the universe’s way of balancing out the fact that his name doesn’t rhyme.”

“Jason Statham – tough Brit who doesn’t take s@#t from anyone. Usually involves smacking some heads together”

“Jeff Goldblum. He basically just plays himself. Which isn’t an issue. I love himself.”

“Charlie Day. He always plays an anxious weirdo on the verge of a nervous breakdown, and he never fails to entertain.”

“Michael Cera. I like that movie where he plays the awkward shy teen”

“Going to go for a potentially unpopular one and say, in films and tv at least, Benedict Cumberbatch You need a clever @$$hole who doesn’t work well with others outside of a small group and has a heightened sense of their own self importance?

Dr Strange, Sherlock, Alan Turing, Kahn. Even on stage his portrayal of Frankenstein and Hamlet fit this mould.”

“In the past 10 years worth of films, Liam Neeson.”

“Owen Wilson. Always laid back, suave, funny but not overly so, can diffuse any tense situation.”

“Ryan Reynolds has made a career of being the wise cracking quick witted quipper. He’s literally Deadpool in every movie now, just sans the Uber violence, mutant abilities and 4th wall breaking.

That’s not a complaint, just the niche he has been able to very successfully embrace.” 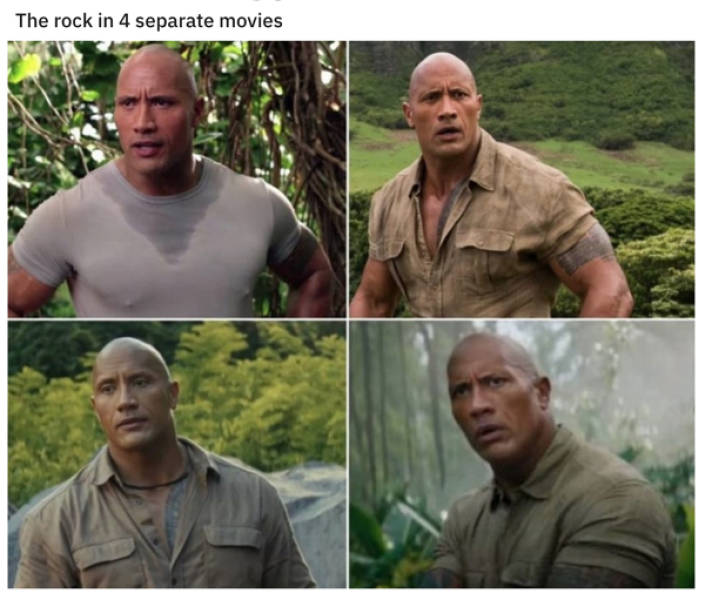 I imagine the conversations for his role are something like this:

The Rock: So what role am I going to play?

Rock: IT DOESN’T MATTER WHAT ROLE I’M GOING TO PLAY”