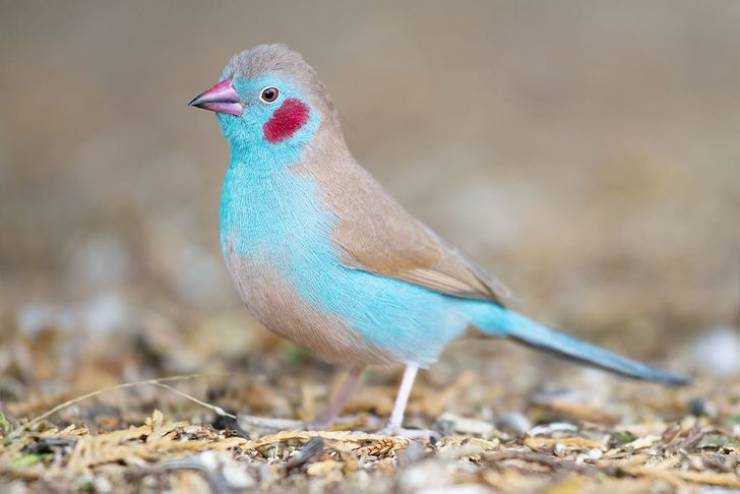 This small turquoise bird, also known as the “red-cheeked cordon-bleu,” due to the intense red color of the male’s cheeks. Females have a slightly lighter plumage, and this is how they can be easily told apart. They are found in the east and center of Africa, including countries like Somalia, Mauritania, and Angola. 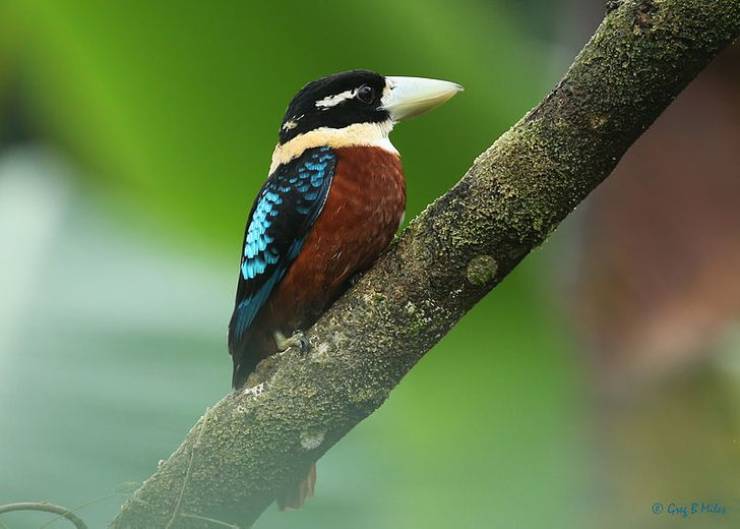 Also known as the Gaudichaud’s kookaburra, this small bird of very particular colors lives in New Guinea, deep within the rainforest. Unlike other species of the kookaburra, which prefer open spaces, these birds prefer forests. It feeds mainly on insects, and the males defend their territory in a very aggressive way. 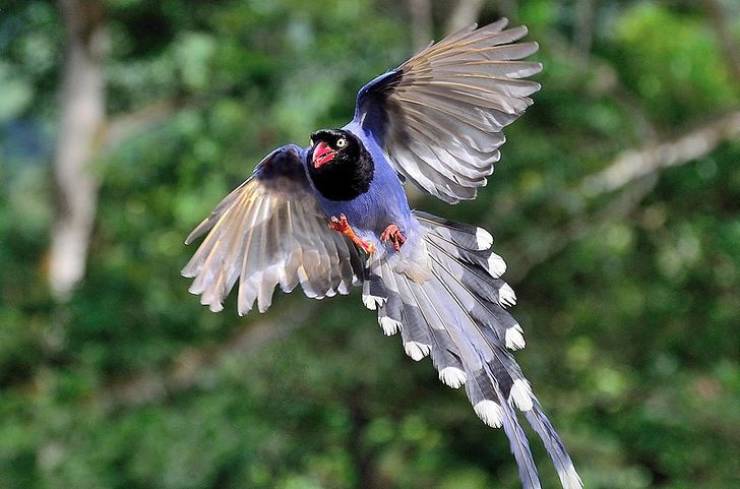 This yellow-eyed magpie also has a very particular shade of blue feathers covering its body. In addition, its red legs and beak make it very easy to identify. Its tail is longer than that of a common magpie, and we can find this species flying over the skies of Taiwan, where it is endemic. It is worth mentioning that it is a monogamous bird, since it remains with the same partner throughout its life. 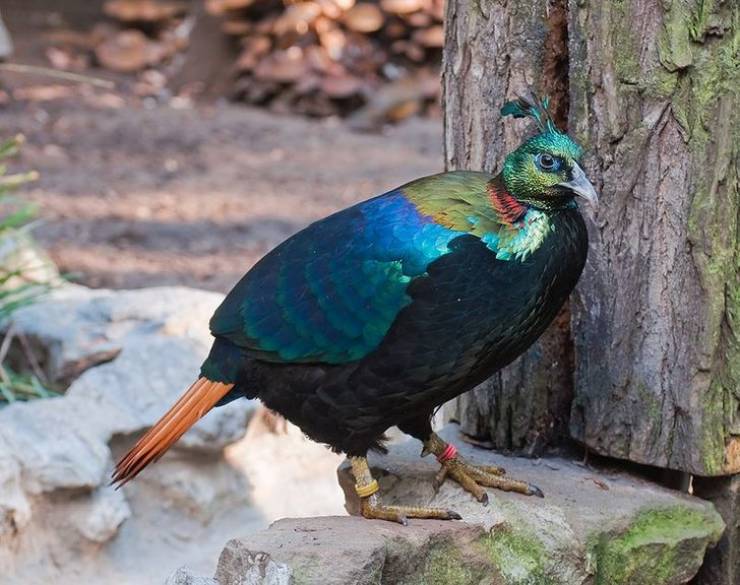 Also known as the Impeyan monal, this bird is the national bird of Nepal, where it’s known as “danphe,” and it comes from the coniferous forests of the Himalayas. This bird is also considered the state bird in Uttarakhand, India. 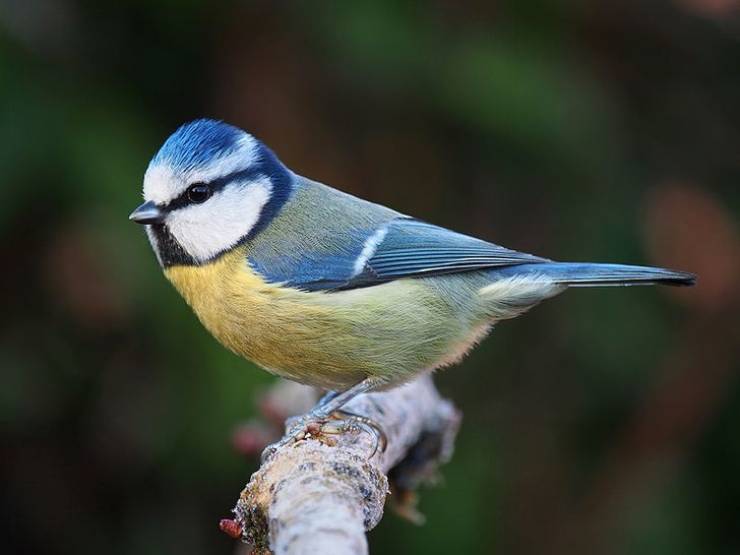 We can find this little fellow with sharpened claws and yellow and blue plumage in many parts of Europe and the Middle East. Males have a brighter color on the tops of their heads, which is a little more dimmed in females. There’s a great variety of subspecies that can be found in the Balearic Islands in Spain. 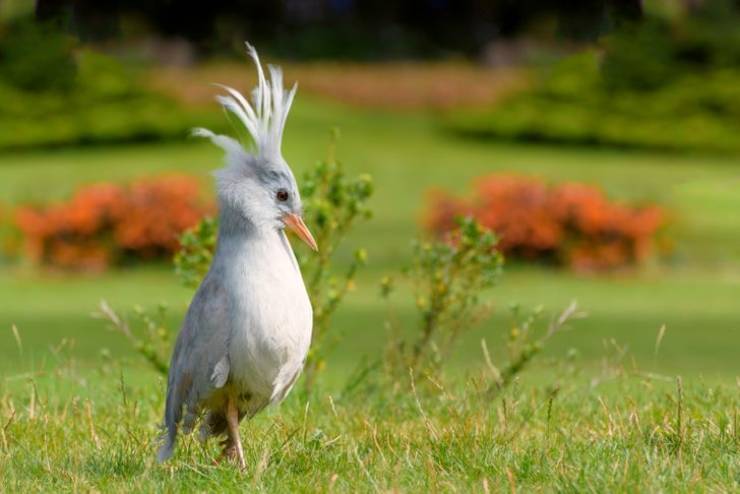 This grayish bird comes from New Caledonia and can be easily recognized by the length of its crest. It has a sort of nasal horn that no other bird in the world found so far seems to have. It spends most of its time on the ground, instead of flying. That’s because despite having large wings, it is actually not able to fly. It measures about 55 cm, but unfortunately it has become a threatened species. 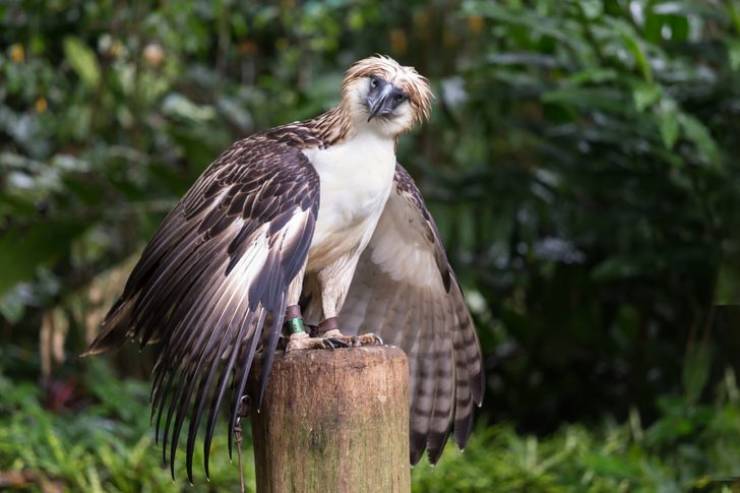 It is a bird of prey, and it’s one of the largest tropical eagles in the world. It is the state bird of the Philippines. Also known as the monkey-eating eagle, this tropical bird feeds on species like monkeys, snakes, and other large birds, like hornbills. Females of this species tend to be bigger than males and, unfortunately, it is also listed as a critically endangered species. 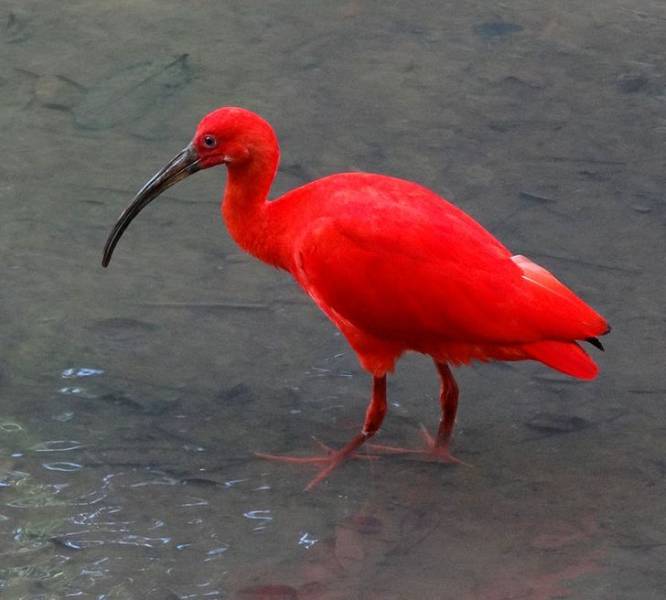 Its shape is similar to that of a pelican and it’s the national bird of Trinidad and Tobago. In fact, you can even find it on the coat of arms belonging to Trinidad and Tobago. But it can also be found in other countries like Suriname, Brazil, and the Atlantic coast of the Americas. As it grows older, the color of its red plumage becomes more intense. 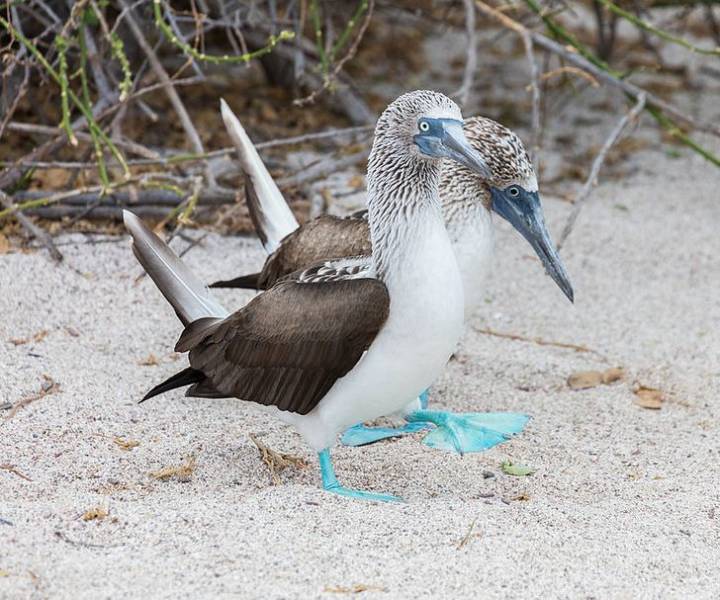 This rare species of blue-footed birds can be found between Peru and the Gulf of California. It can grow to be up 35 inches in height. The blue-footed booby has a closely related species that is red-footed. The color of their legs comes from the carotenoids present in their diet. 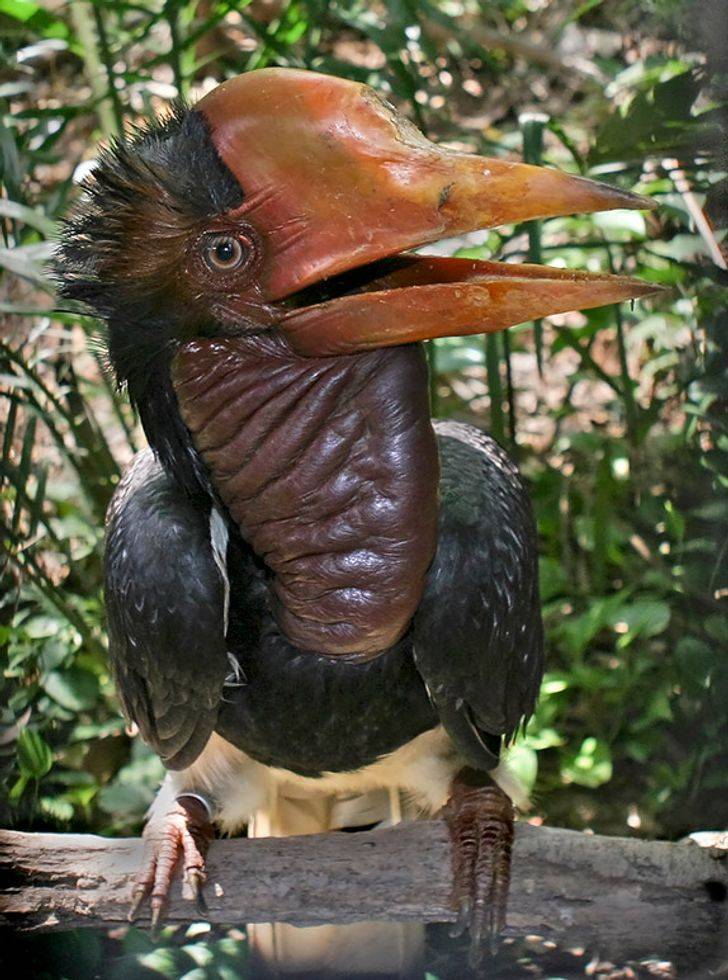 This strange-looking bird is found in regions like Indonesia and Malaysia, and it is sedentary. Local mythology holds it to be the guardian of the river that divides the world of the living and the underworld. It is a pretty large bird, covered with black feathers and a kind of hoof that goes from its crest to its beak. Males use it as a defensive mechanism, when fighting other birds, to protect their territory. That sort of hoof is made of ivory, which is highly valued in craftsmanship. That’s why this bird has been added to the list of critically endangered species. 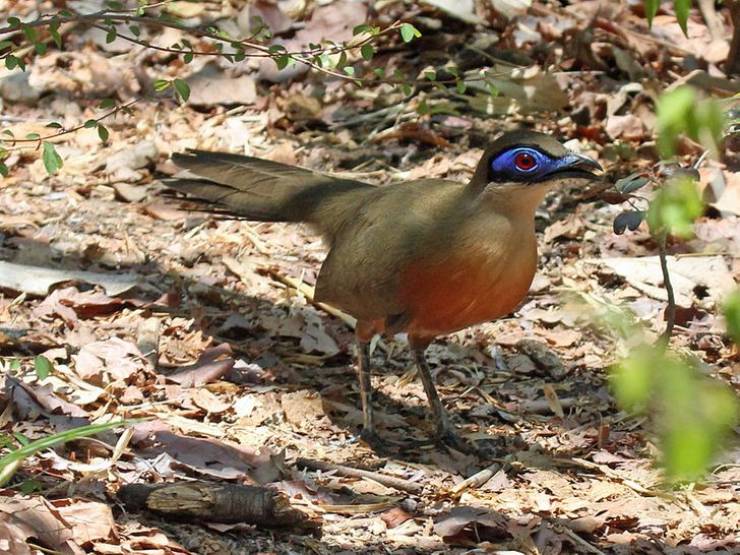 This bird, with red eyes and a red chest, looks like it is wearing a very bright blue mask that covers its face. It was discovered by entomologist Charles Coquerel, while he was collecting insects on the island of Madagascar — which is why it bears his name. Other species like the Coquerel’s sifaka and the Coquerel’s giant mouse lemur were also discovered by this man. All of them are endemic to the Island of Madagascar. 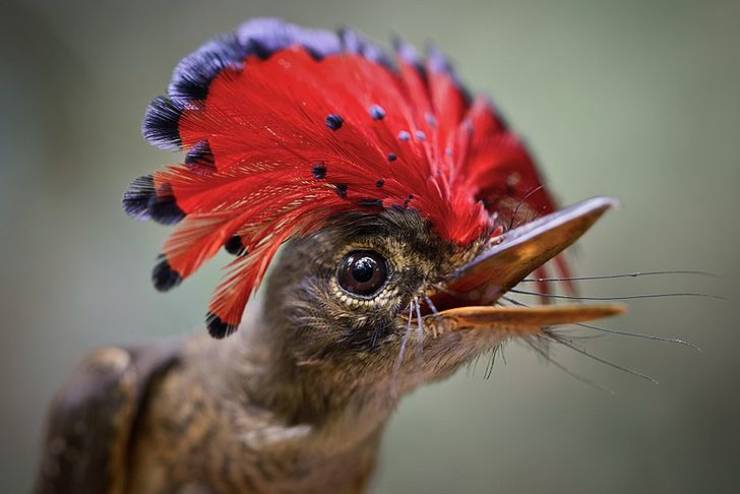 The Amazonian royal flycatcher, as its name suggests, can be found in different regions of South America, mainly in and around the Amazonian rainforest. It measures between 5.9 and 6.9 inches. It bears this name because it feeds on flies and other flying insects and has a crown of feathers. 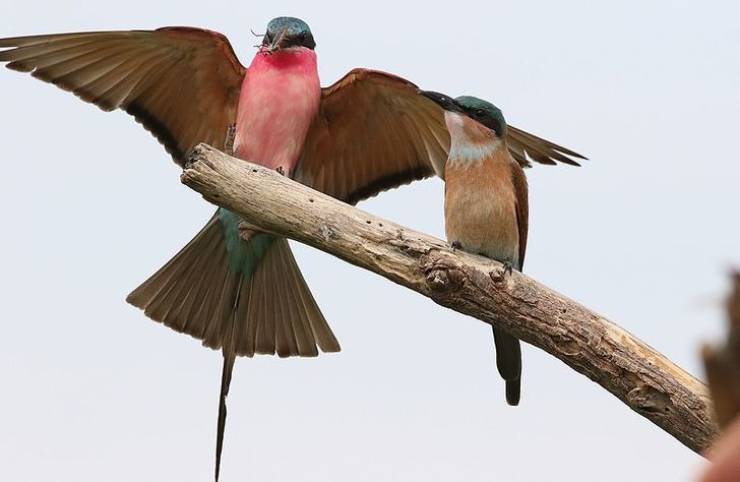 Found in southern African countries, this small bird digs tunnels to build its nest. There, it lays 2 to 5 eggs. It is a very sociable species, which migrates in flocks from the north to south of the continent. It feeds on flying insects like bees and others species that can easily be captured looking for pollen in the bushes. 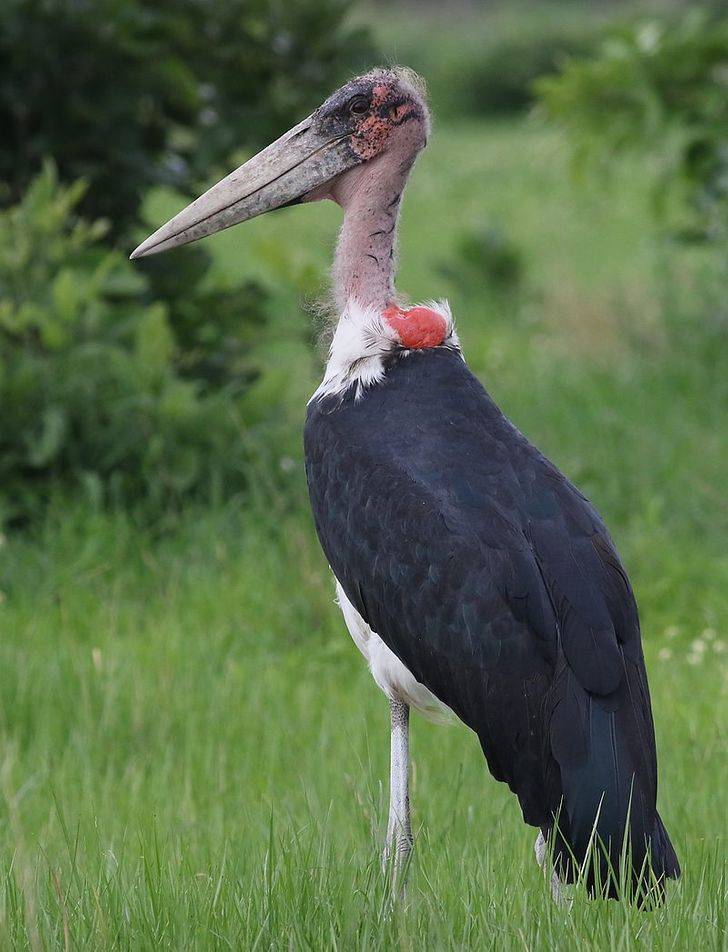 This scavenger bird hunts small vertebrate animals around the lakes of the swampy areas and the savannah of Africa, south of the Sahara desert. Its typical weight ranges from 9.9 to 17.6 lbs. Its length from bill to tail can range from 47 to 51 inches. In addition, its lifespan is 41 years in captivity and 25 years in the wild. It’s a very ill-tempered bird. 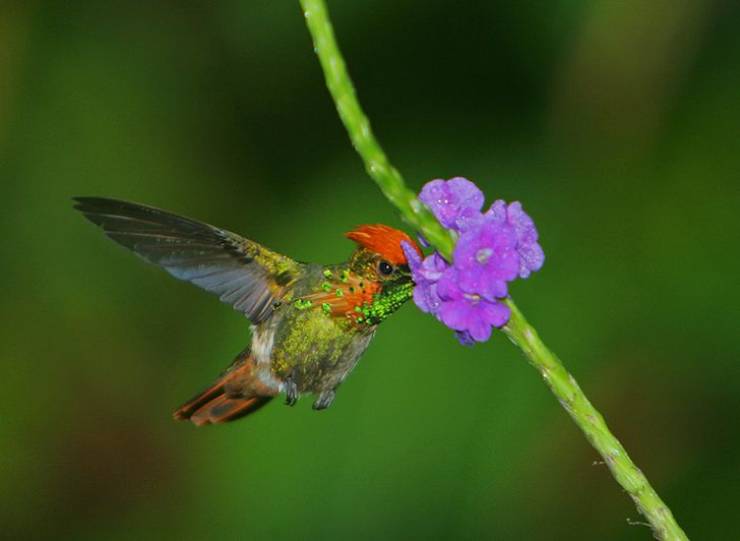 This small, colorful bird is a type of hummingbird. It can normally be found in the northern zone of South America in countries like Brazil or Guyana. The males have a reddish-brown crest, while the females lack the crest and plumes the males are known for. 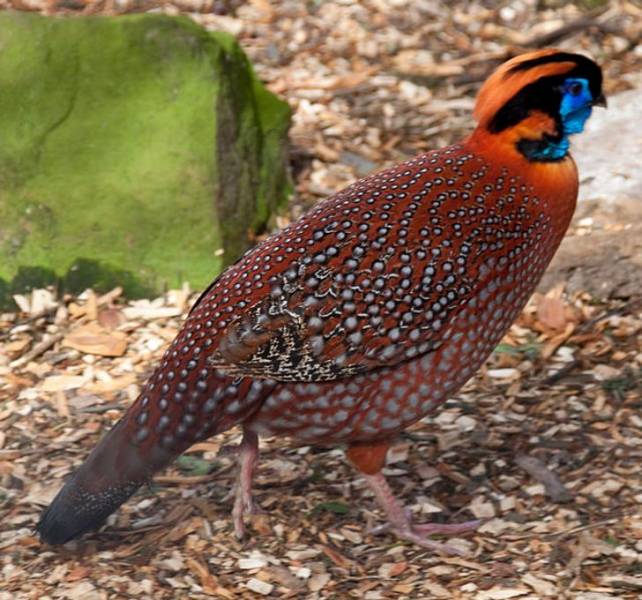 With a body shape similar to that of a rooster, this peculiar bird can be found in the mountains of Northeast India and Central China. It mainly feeds on berries, grass, and plants. Adult males are pretty colorful thanks to their bare blue facial skin and red-and-orange, white-spotted plumage. 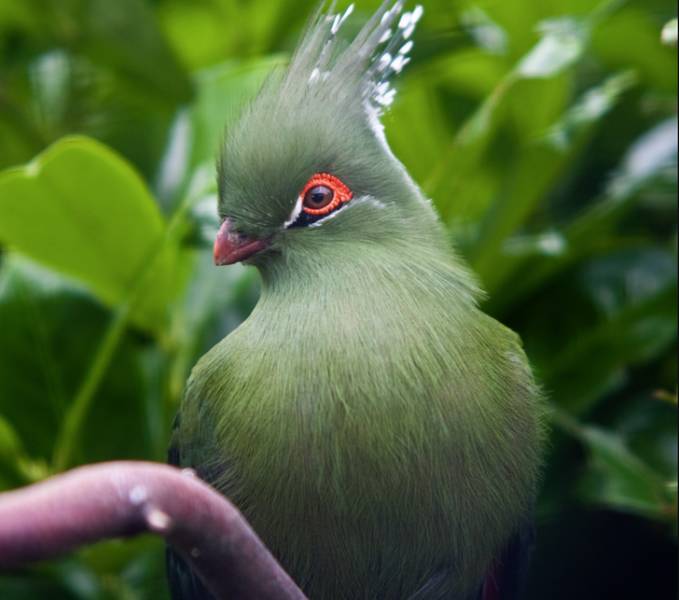 In southern Africa, we can find this green bird with red eyes. It weighs just over half a pound and has a length of 15 to 17 inches. It is easily distinguishable thanks to its greenish plumage with its blue-tipped wings and tail. That is, of course, besides its beautiful plume with black and white tips, and eyes that seem to have been outlined in white. It feeds mainly on fruit. 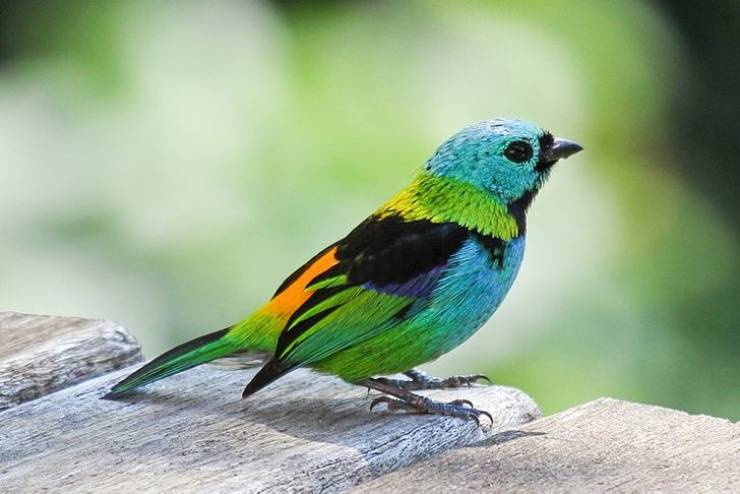 Also living across many different countries in South America, is this colorful bird with a turquoise chest, yellow back, and black eyes. But don’t be fooled by its scientific name, “Tangara chilensis.” It doesn’t live in Chile. But it can be found in Venezuela, Peru, Colombia, Ecuador, Bolivia, Brazil, and the Guianas. 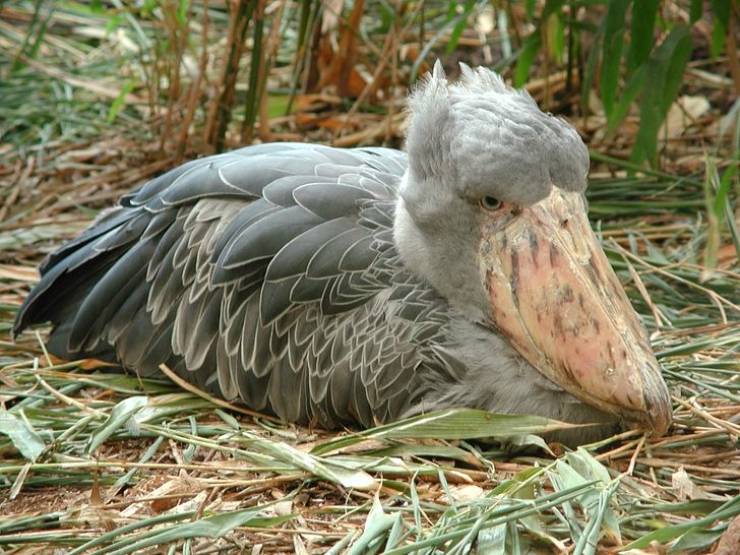 This species of pelican is known for the shape of its beak, which resembles that of a shoe (hence the name). It has a brownish plumage in a very peculiar shade at birth, which turns gray with age — sort of like humans if you think about it. It lives in Central Africa, but unfortunately, it has been recently added to the list of threatened species. Adult birds of this species have been heard uttering a sort of “moo” sound, like a cow. 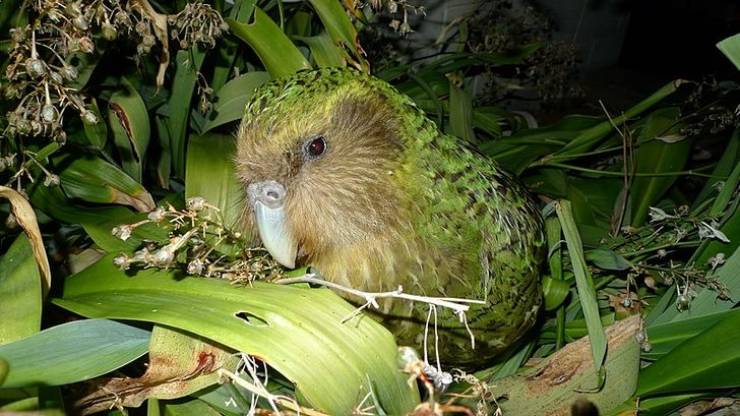 The kakapo belongs to a family of parrots that live in New Zealand. It’s a nocturnal bird and although it cannot fly, it has a highly developed sense of smell. A curious fact about this species is its scent, which is described as musty-sweet. Unfortunately, this characteristic makes them easy prey for larger animals. Other than that, it’s possibly one of the world’s longest-living birds. Some specimens have been known to live up to 80 years.