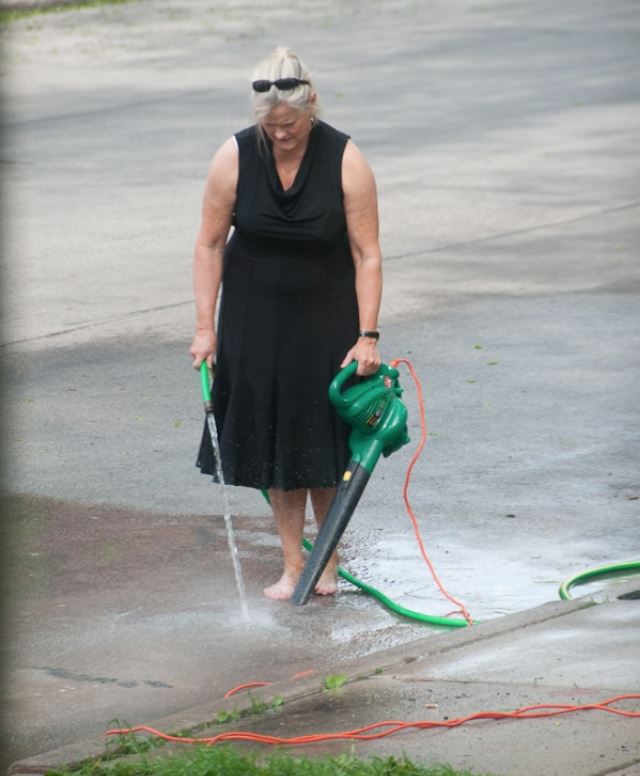 A former neighbor of mine would wash the street gutter with a hose in one hand and a corded electric leaf blower in the other. Plugged into an extension cord.

Shoveled my driveway for me while drunk at 10pm. He didn’t do an amazing job, but I appreciated the intent.

Slapped a goose across the face, pointed at it and said in his New Jersey accent: ‘that’s why you don’t shit on my lawn chairs you fuck.’

My neighbor regularly sits in his car, which is parked in his garden, and just revs the engine. His Dad got him the car years ago and he has never been able to pass his test so he just revs it. Sometimes genuinely for hours.

He likes to play his violin in the small forest between our houses in the early hours of the morning. Scares the fuck out of me.

We live in an older neighborhood with chain-link fences. You can see pretty much everything in the neighbor’s yards. We have one neighbor who feeds stray cats and he’ll stand in the back yard every evening and call them to dinner.
He’s a big man with a huge belly and he stands on his back porch in his boxers calling the cats by name. ‘Here Fat Boy! Here Cry Baby! Here Big Momma! Kitty kitty kitty!’

I watched my next-door neighbor chop down the tall weeds behind our houses with a pair of nunchucks.

I went outside to the garden with my dog and saw my elderly neighbor just sitting on top of our shed. He chatted with me for a while before I went back in, and then after a while, he got down off the shed and went into his house. The best part was the baffled looks my dog kept giving him.

My neighbor growing up was a bit odd. Once he was walking around his back yard with a G string chasing after butterflies, putting them in a ziplock bag and running inside. I don’t wish to imagine what he did with them.

She followed us when we went on vacation and stayed in the same hotel.

I heard screaming from over the fence one day. Look over to see her yelling at her son and throwing KFC chicken pieces at the kid because apparently, the little shit ate the skin off all of the chicken she brought home for everyone and left just the meat behind. Nearly peed myself laughing.

My buddies and I were out drinking on the porch, dude came out with a Mike’s Hard Lemonade and said: ‘Saw you guys drinking some beers, made me really want one too hahaha.’
Great guy, but a bit of a dork.

The neighbor on one side of me left his surprisingly hot wife.
Then he started banging the guy on the other side’s mother. Who was in her 60s. On my neighbor’s deck. The one that faces the street.

My polish neighbor actually would race pigeons. So with one whistle, the pigeons would fly in a circle over the yard and with another whistle come back into the coup. He showed me his long shelf of trophies, and he’s been doing this for years! I would drink vodka with him when I would now my lawn in high school. Still miss him!

One night I stepped out to walk to the liquor store and my neighbor across the street was sitting on his porch playing the piano accordion.
When I say playing, I mean absolutely shredding. This old Italian guy in his 60’s just kicking ass.
I waited until he was finished and gave him some applause.
He called out a quick “Thank you!” and launched into another tune.
What a legend.

My neighbor looked over his fence, looked at me straight in the eyes and said ‘the last time I looked at somebody like this, they died a week later’
After that, he just went back to his business like the conversation never even happened.
I was about 8 when he said this to me! So I spent the next week living in fear. I’m alive and well, fuck you, Ray!

There’s an older guy in the neighborhood who walks backwards around the entire block. It’s pretty freaky if you’re driving down the road because it takes your eyes a couple seconds to adjust to what you’re seeing. He was out there at it again this morning!

My neighbor used to sit in her window and watch us with binoculars. We called her ‘the sentinel.’ She was my grandma.

I was walking my dog a couple of weeks before Christmas when my neighbor down the street stomped out of the garage dragging a full-size Christmas tree, threw it to the curb, kicked the absolute shit out of it, and turned to go inside. A voice from someone I couldn’t see in the garage yelled something and he visibly slumped, went back out, and dragged the tree back inside.

Previous Trash People Gonna Trash
Next Is It A Cat, Or Is It A Squirrel In Disguise?