“Why do these window grills have a bulge? Seen in Spain.” 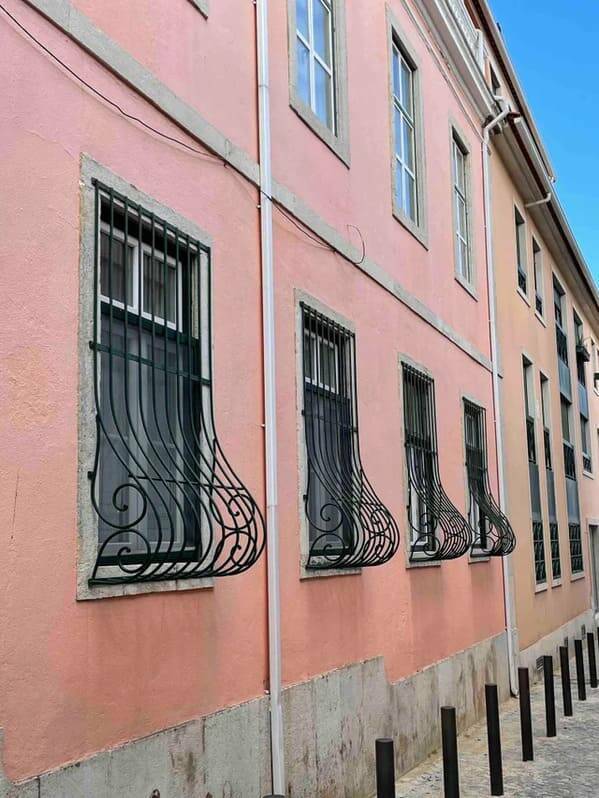 “Is this a shock collar? My dog was wearing it after coming home from boarding.” 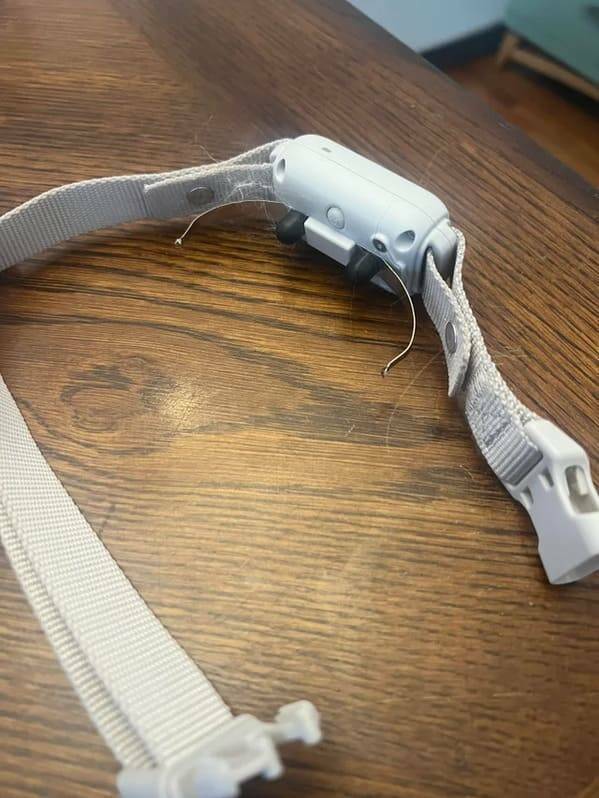 “Yes it is a bark collar, also formerly known as a shock collar. I say formerly because they now come with vibration. The rubber tips on the collar indicate they are not using the electric shock feature. Instead if the dog barks it vibrates, scaring the dog not to bark.” 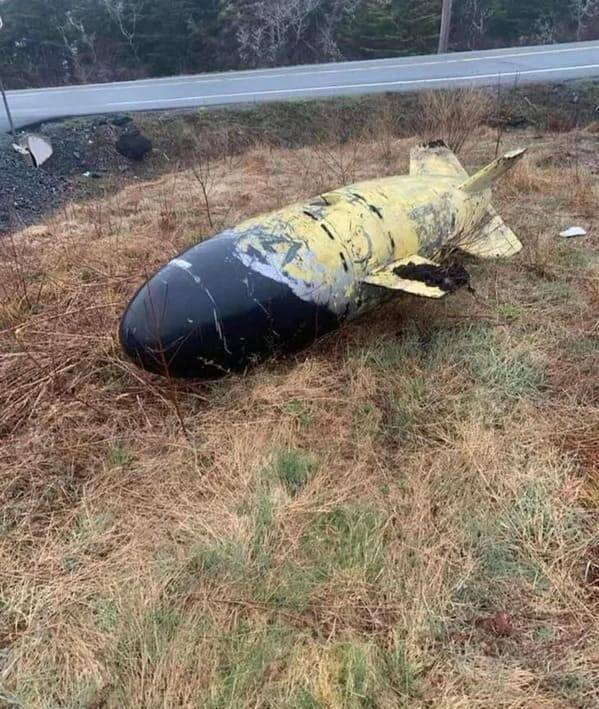 “Don’t think it’s a bomb, it looks more like fishing net floaters used to keep huge fishing from dragging on the floor. (they’re usually at the bottom of the net to keep the net straight and not tangle up while the net is being dragged)”

“What’s this device mounted under my office desk?” 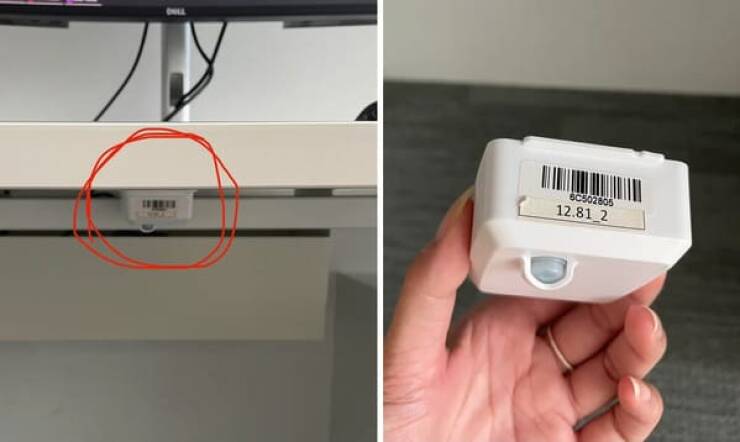 “Motion sensors are installed in a large amount of desks to give stats on desk occupancy. Very common now that some have and some have not returned after covid.

It’s not to monitor an individual’s movements at their desk. If they want that data they will use the software on your computer because that can tell what you are actually doing at your desk”

“Large chunk of (metal?) Weighs quite a bit in your hand and hasn’t changed in color in decades.” 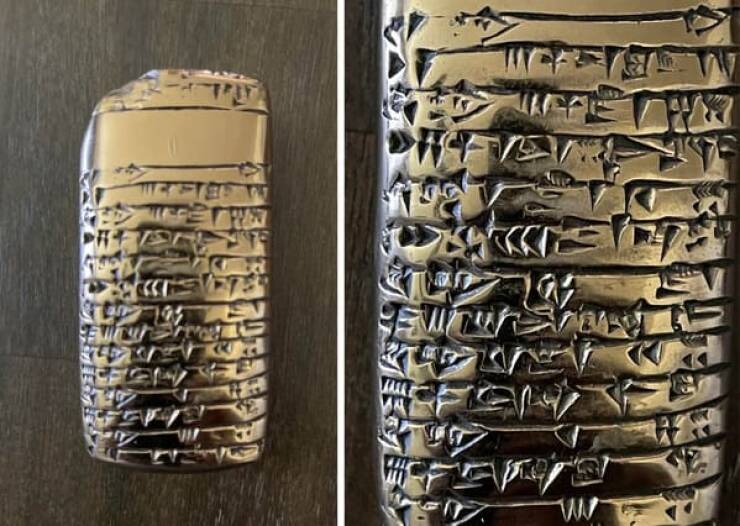 “The circled m logo is the logo of the réunion des musées nationaux, the French public museums. Probably a copy of a cuneiform tablet available as a souvenir at the Louvre, among other museums.”

“I’ve seen this cane-shaped (usually) brass post at numerous bars and pubs and wondered what it is and what it is used for. l have been unable to Google the correct sequence of words to get a result.” 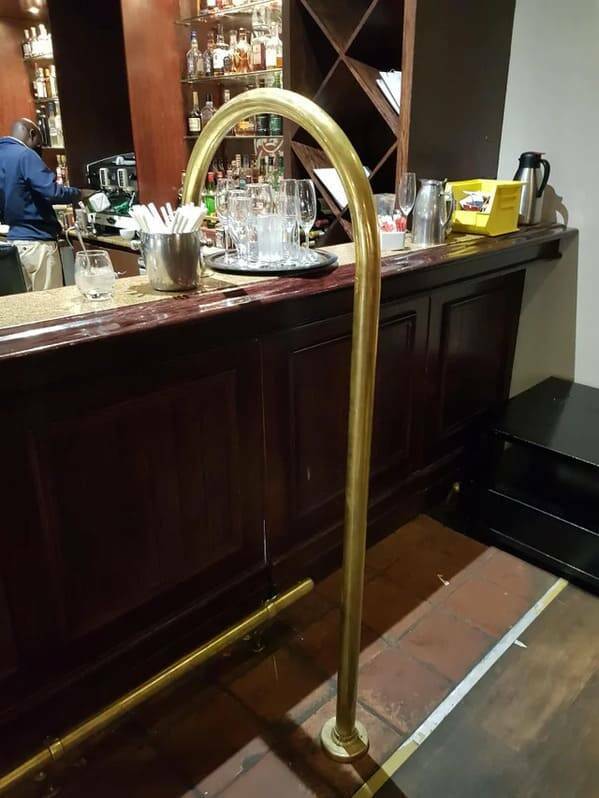 “A “divider” or “service divider”. It serves to keep standing customers to one side, away from the part of the bar where servers pick up drinks. Also notice the opening under the bar, the bartender (in some designs) can lift the top and gets in and out. You don’t want customers standing there blocking access.”

“On the Bed in my Hotel. Doesn’t Open or Anything. W Melbourne, Australia.” 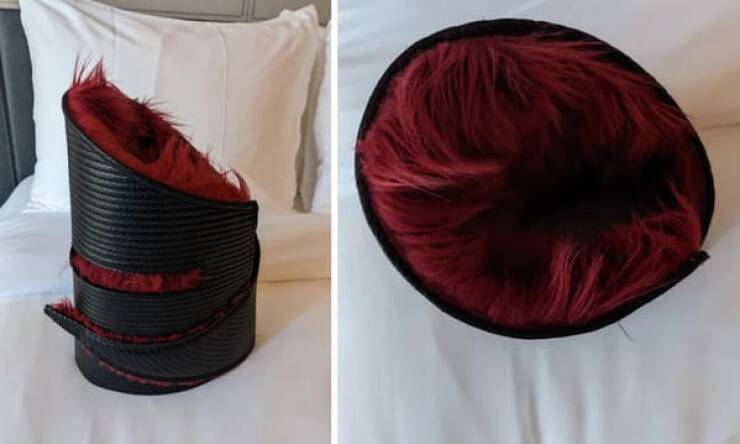 “Hi OP, this piece is a nod at Ned Kelly’s helmet where the slit in the first picture is where the eyes would be. It’s been reimagined as a “playful leather and faux fur fascinator””

“Pulled the pan on my transmission to clean the magnet, and found hundreds to thousands of these little (<0.3mm) steel beads, stuck to the magnet. 2002 Subaru Outback 160k, automatic. Confirmed by mechanics that nothing inside the transmission resembles this. The transmission also seems to run fine.” 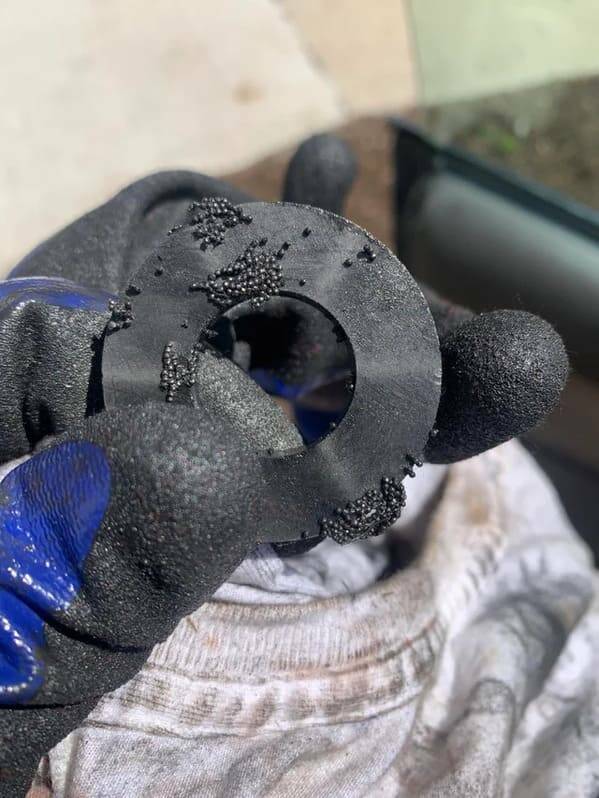 Manufacturer did a bad job of peen recovery.”

“What is this thing? The circular thing on a post in an antique place.” 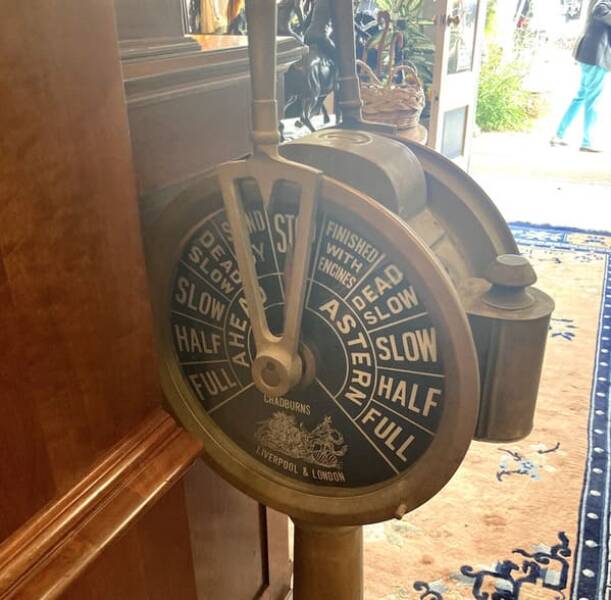 “This is an Engine Order Telegraph used in older marine vessels. Allowed the Captain remote communication with the ships engine room.”

“Found above the door in the backseat of a 2011 Porsche Cayenne; What are the holes behind the small door used for?” 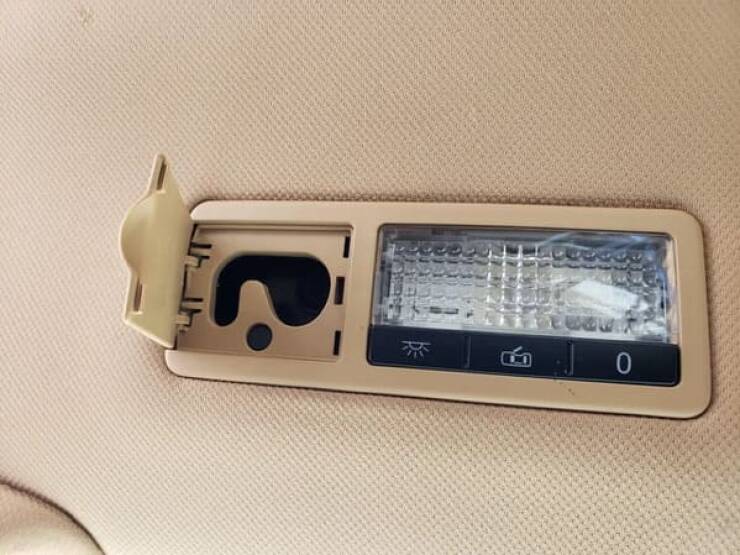 “I drive a Volvo and these holes are for the cargo net (or a mesh fence thing meant for pets) and there are other actual hooks by the “oh sh#t” bar like your vehicle.” 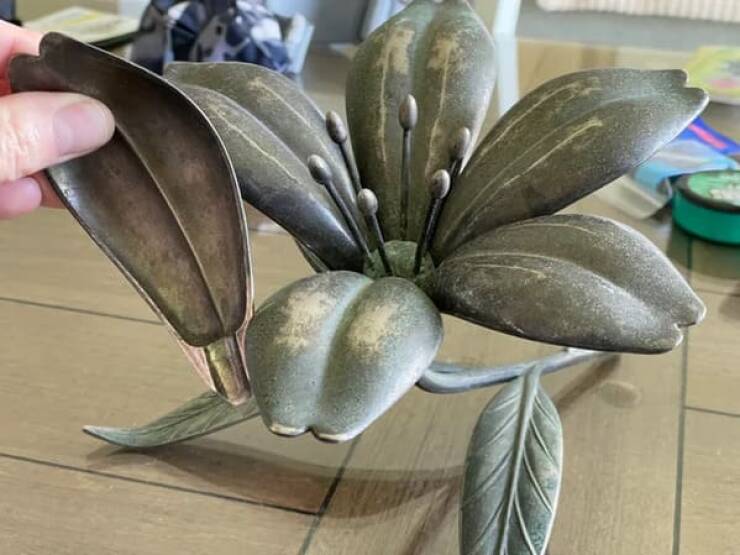 “Park Bench with weird cutouts. Don’t think it’s for bikes, you’d need a really long chain to wrap all the way around.” 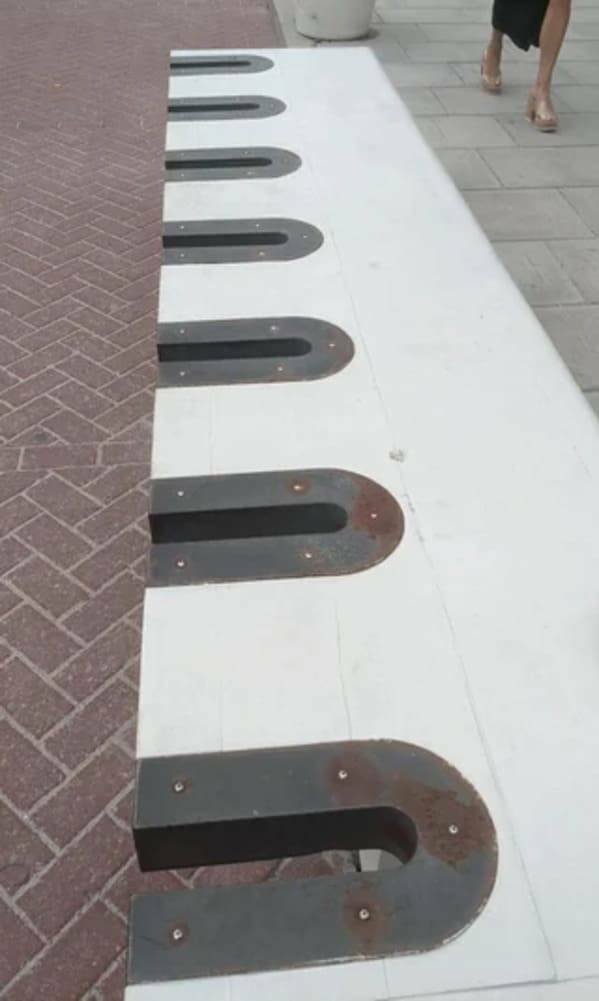 “It’s for bikes. When u want to sit you park your bike behind you. It’s not meant to lock your bike and leave.”

“What’s this weird thing in my car’s gas cap area? I was filling my car up at a gas station and noticed this weird metal tile that had been left in the little area where my gas cap/tank is. I drive a ‘99 so anyone can open my gas cover. Let me know if I’m being tracked or anything.” 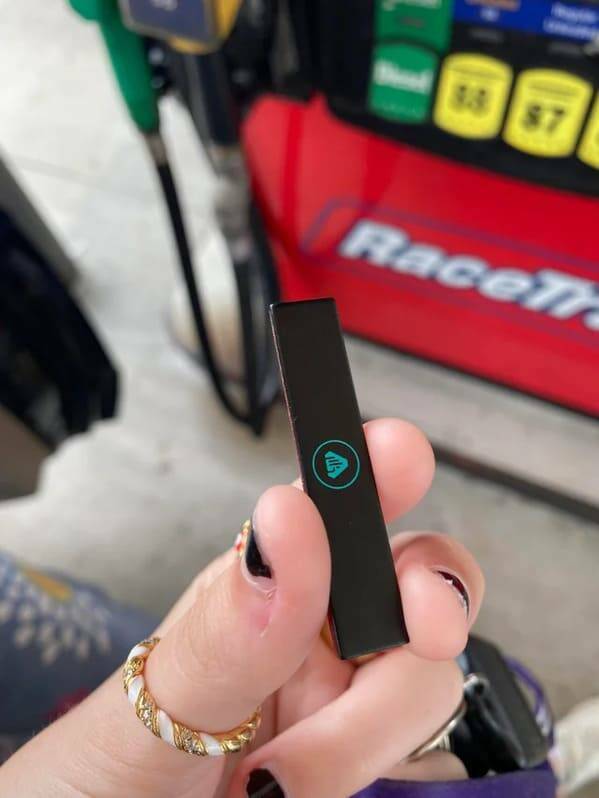 “You have nothing to worry about because it is just the mounting plate for something called a Pump Pal that allows you to “never touch a dirty gas pump again.” Basically it’s a silicon glove thing you wear when using the pump and it has a magnet that is used to store the glove on the fuel door of your car using that adhesive backed metal plate.” 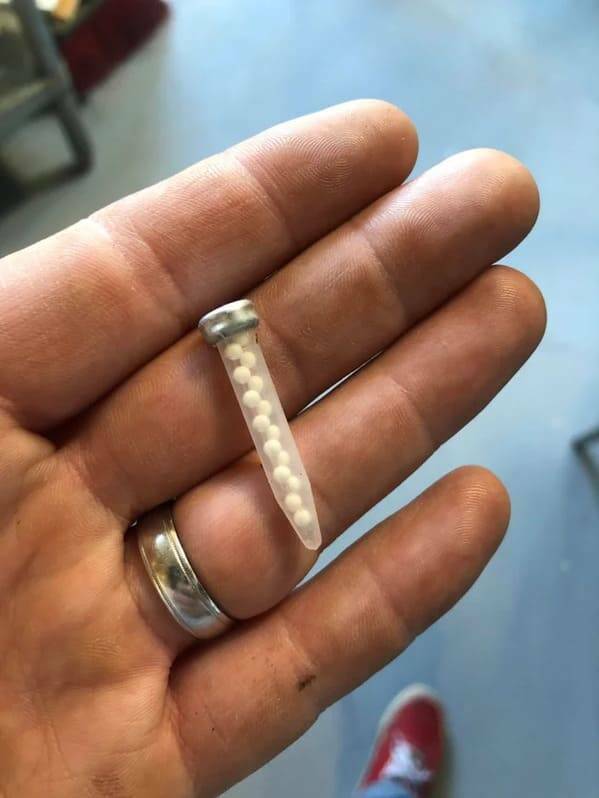 “100% this is the answer as a former pest control technician I have handled many of these. They are usually stuck into a glue trap to get them to fly in there and get stuck.”

“Tiny pellets (maybe wood?) that were found on the couch.” 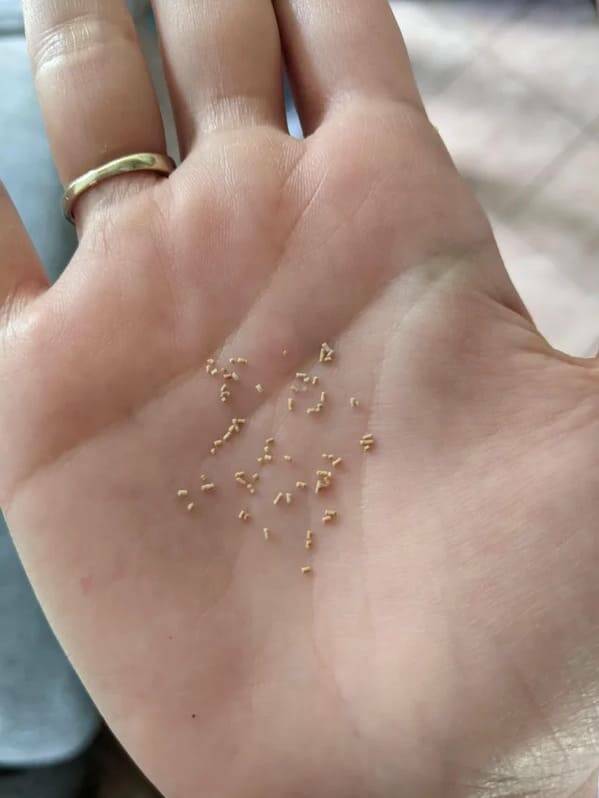 “Indeed this frass match more those I’ve found, in any case it seems to be wood insect eater so we’ll check if any other pellets are found and call professional ! I guess it is Likely Solved!”

“What is this chrome thing near the toilet and the toilet paper holder?” 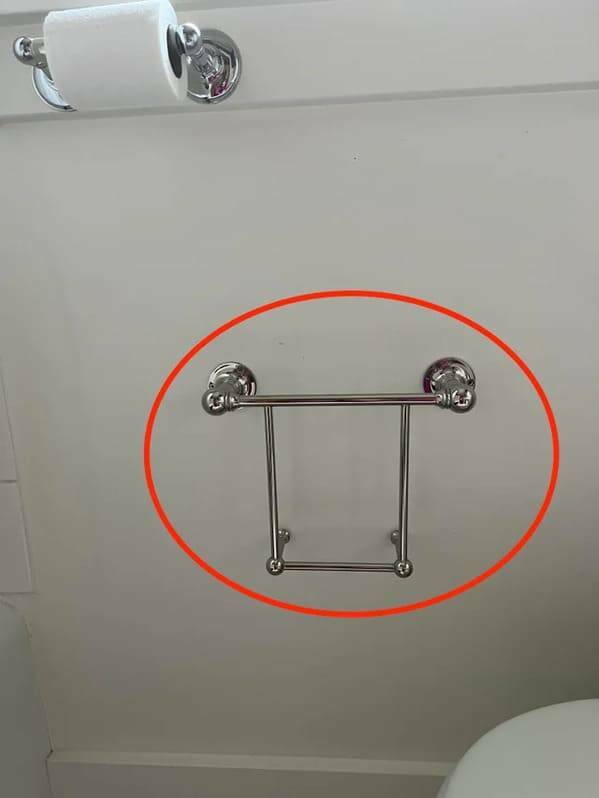 “Looks like a holder for magazines. “Literature” is an important bathroom supplies category – or at least used to be before smartphones, I guess.”

“Cinderblock stove structure on the edge of 1920 farmhouse property. Located down the hill from the house.” 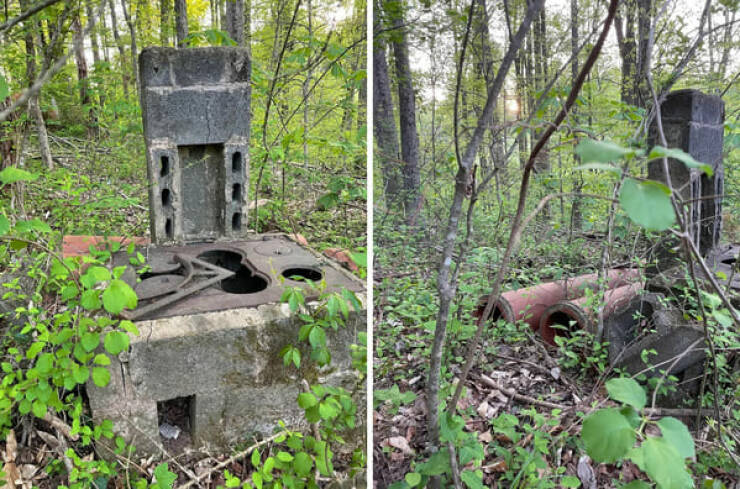 “That’s what it is. Cook houses were often away from the main house to reduce fire risk and to just deal with the heat in the summer.”

“Microphone-shaped object with a transparent globe that was spotted on the London underground. What is it?” 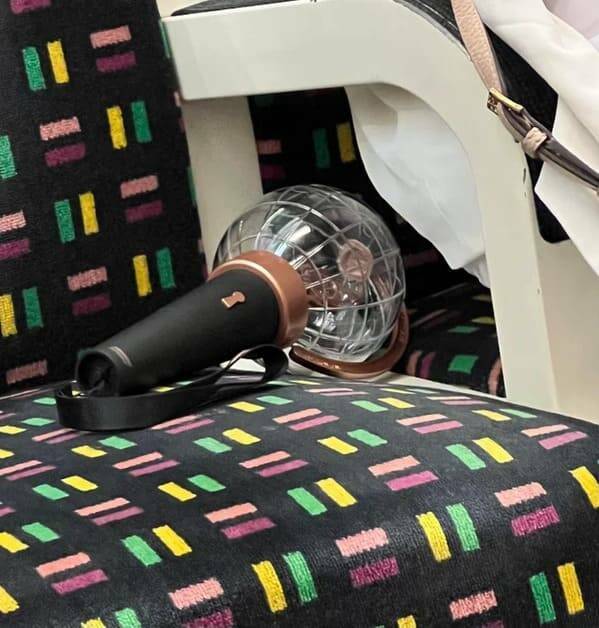 “That’s a light stick for the kpop group ateez. They had a concert tonight. Whoever lost that is going to be very sad.”

“Found at an estate sale in New Hampshire. About 3 feet tall, gold-colored, but silver inside. Some sort of brackets on the back. Hollow like a bucket, pretty lightweight.” 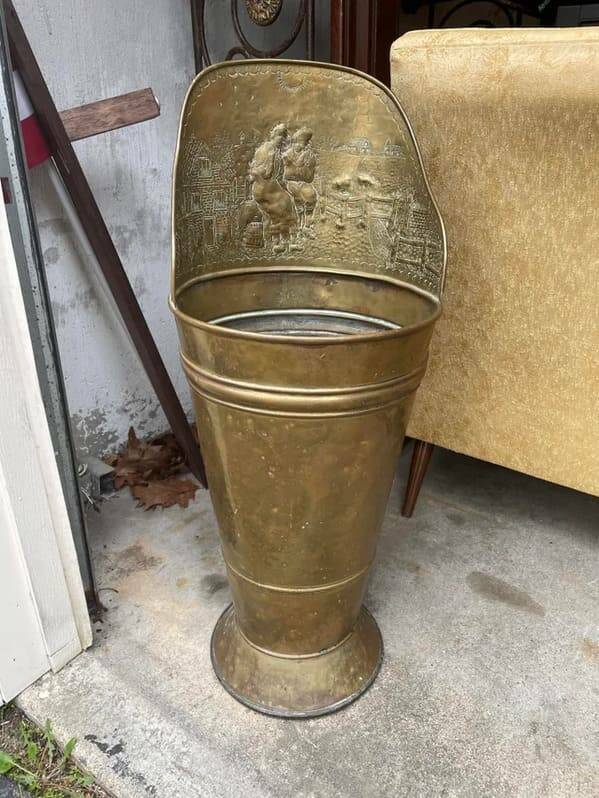 “It’s a grape hod. Strap to your back, harvest grapes, this holds grapes in lightweight, leakproof container.”

“My 3-year-old came home from an extracurricular activity where he can exchange tickets at a “store” for what’s usually dollar store items. It’s rubber/silicone, the size of a fingertip, doesn’t erase, about as hard as a bouncy ball but doesn’t bounce like a bouncy ball. Doesn’t light up. What is it?” 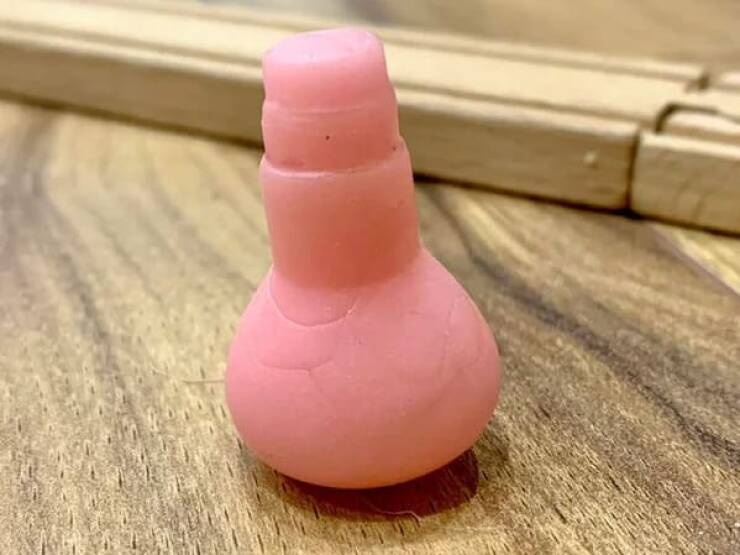 “Holy smokes, you nailed it! I asked him some more about it, he confirmed that something fell off of the narrow end when he was playing with it. When I showed him the picture, he said “yes! yes!” this was exactly what it was! Thank you for solving this mystery for us!!” 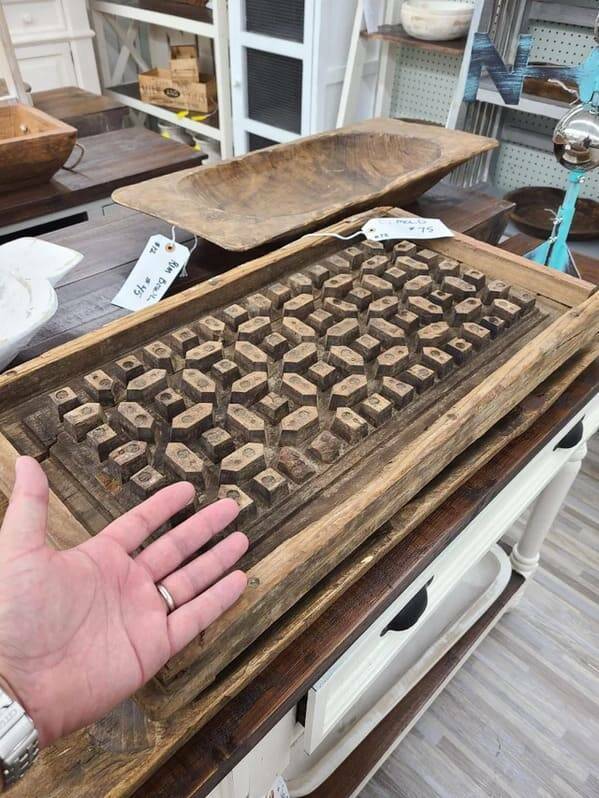 “What is this orange plastic extender? Lightweight that collapses and extends.” 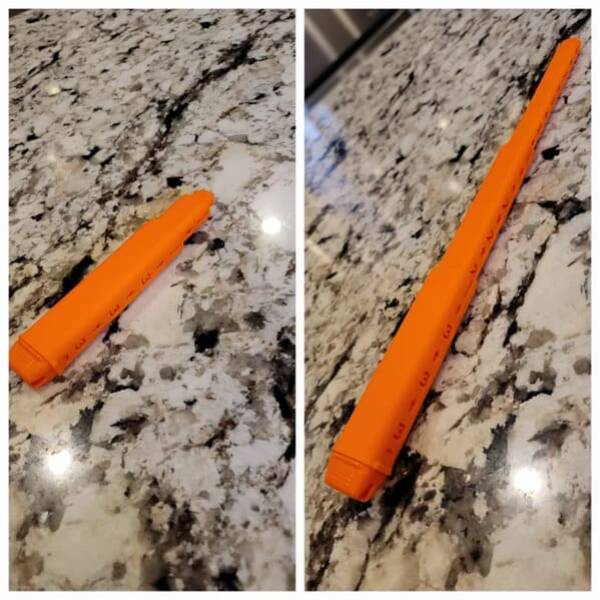 “It goes with a vac sealer machine when vacuuming a product that contains liquids to keep liquid from vac sealing chamber.”

Traps liquids and juices during the vacuum sealing process”

“From the antique store “junk drawer” it came in a small tin with a slip of paper that says “German Inventors Fair 1953” “Patent Applied For” “Manfred Frommberger, Nurnberg Germany”” 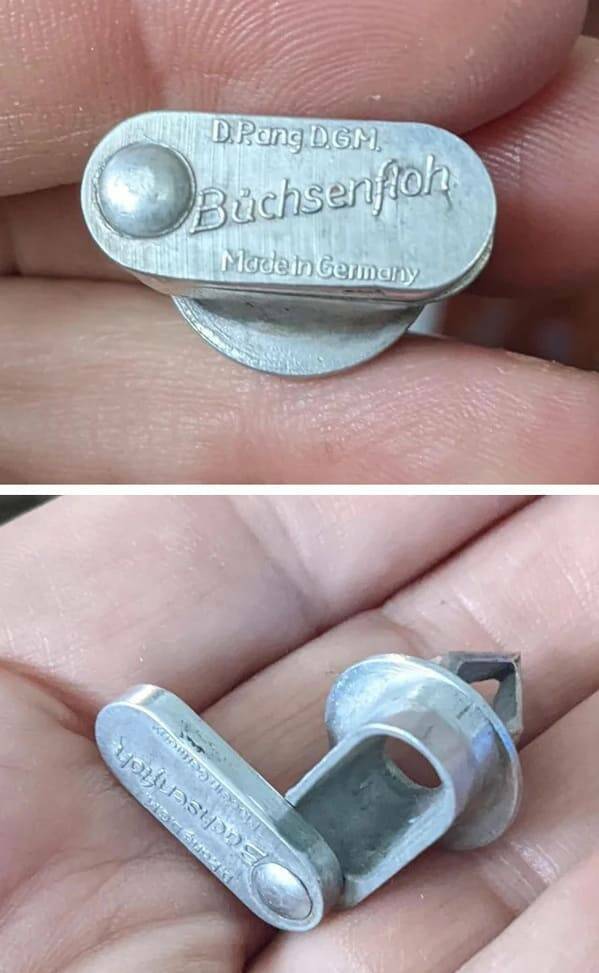 “Could totally be wrong here, but based on the name and shape I’d guess it’s for having a resealable tap for canned goods.”

“Seconded. There used to be small cans of ‘Kondensmilch’ (evaporated milk) from companies like ‘Glücksklee’. You stabbed a hole (or better two holes) into the top to pour (or better drip – people used it carefully) the milk.”

“Long wooden implement with two tines, not sharp at all (probably not a pot fork) – the fork is for scale.” 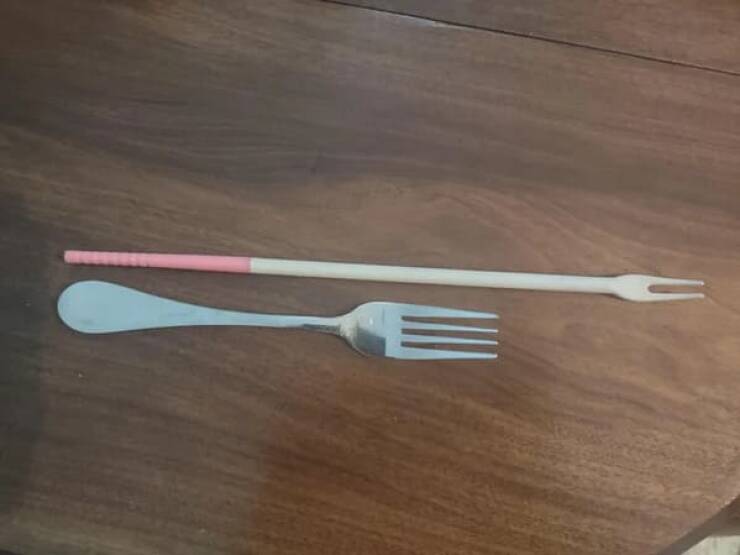 “Small red container. The lid has a small spoon attached to the inside.” 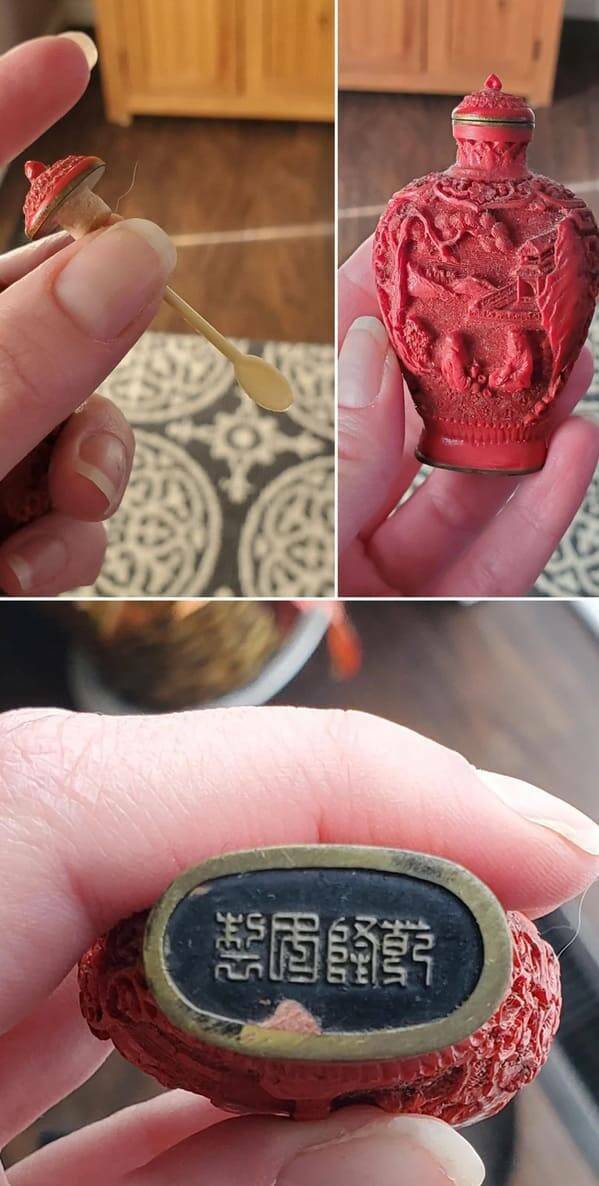 “A snuff (powdered tobacco that you snort) bottle. The Chinese used it becuase regular tobacco was illegal, but snuff was believed to be a remedy for multiple common illnesses.”