7 Amazing Watermelon Sculptures That Look Almost Too Good to Eat

Cut different kinds of melon into a variety of shapes, using cookie cutters, melon ballers or a small knife. Mix them together or add summer berries.

Adhere letter stickers to the watermelon, trace with a permanent marker, then use a linoleum cutter (available at craft stores) to etch away the skin. 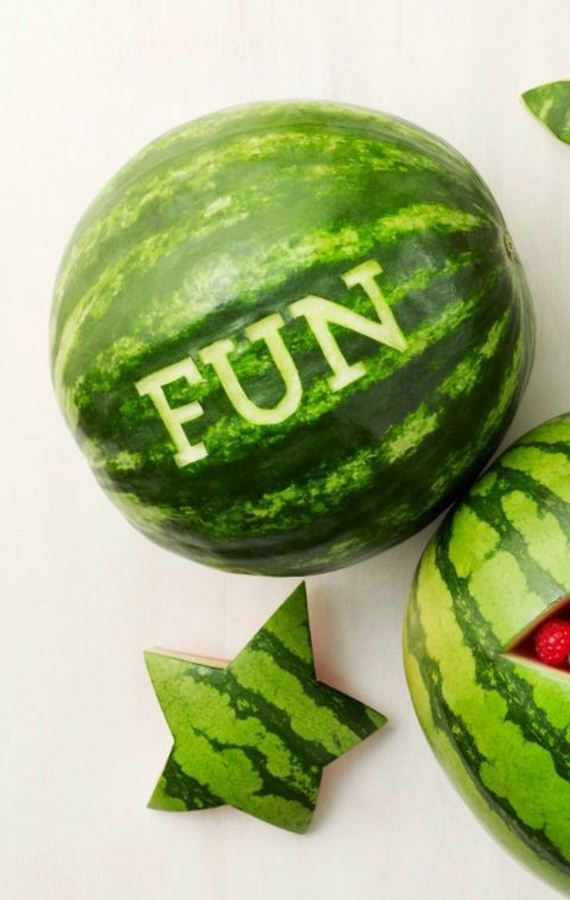 Press a large star cookie cutter into the watermelon, then cut along the lines with a paring knife and remove the shape. Scoop the fruit out with a metal spoon and fill with assorted berries. 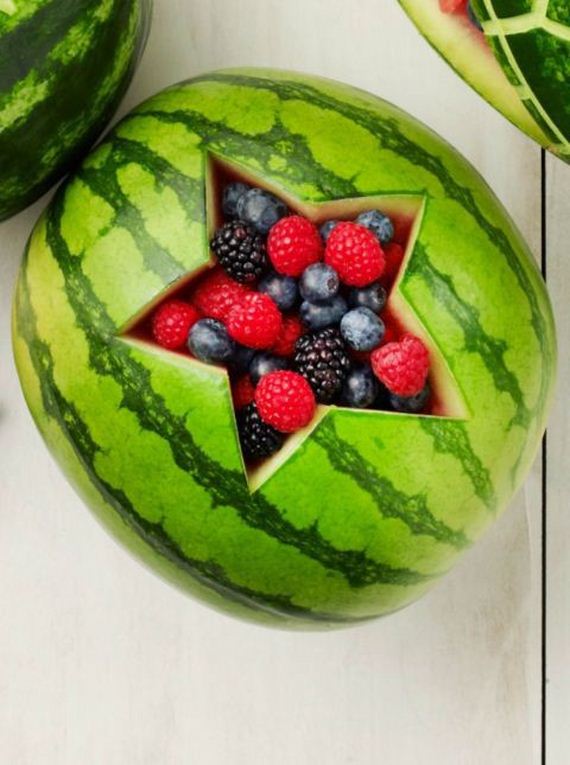 Drink Dispenser
Using a paring knife and working at an angle, cut around one end of an oval watermelon to create a lid, then scoop out the fruit with a metal spoon. With a clean screwdriver, poke a hole about a third of the way up the watermelon, then use a paring knife to make it slightly smaller than your spigot (Stainless Works Beverage Spigot, $13.95; Amazon.com). Gently screw in the spigot so it fits snugly. Handwrite ” Enjoy” above the spigot in permanent marker, then use a linoleum cutter to trace the letters and etch away the skin. Fill with watermelon limeade, then replace the lid and position on a stand.

Halve a small red or lady apple. Cut a slit in the rounded side, then poke holes and insert peppercorn spots. Use half a toothpick to attach a blackberry gummy candy for the head, then push in apple stems for antennae. 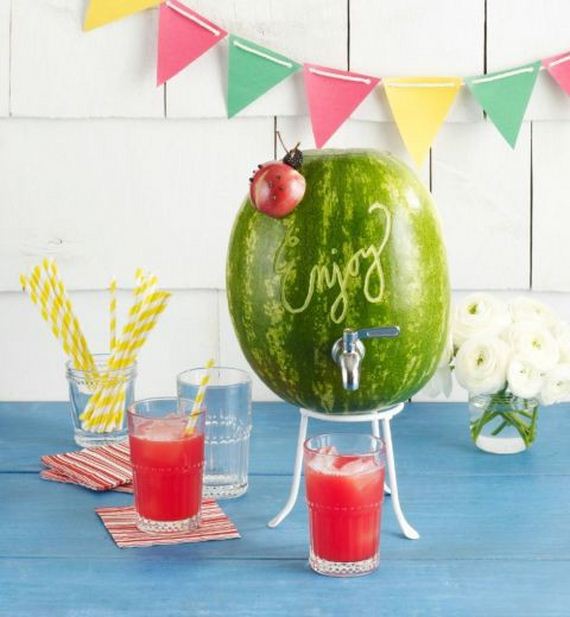 Use a permanent marker to draw a large mouth on one end of an oval watermelon, then cut out with a paring knife; reserve the rind. Scoop out the fruit with a melon baller, then return to the mouth along with berries. From the reserved rind, cut four teeth, two half-circles and two slightly smaller circles for eyes, plus two teardrop ears. Use a linoleum cutter to etch away the skin on the teeth, eyes and ears as shown, then attach using toothpicks. Finish by etching nostrils and wrinkles next to the eyes. 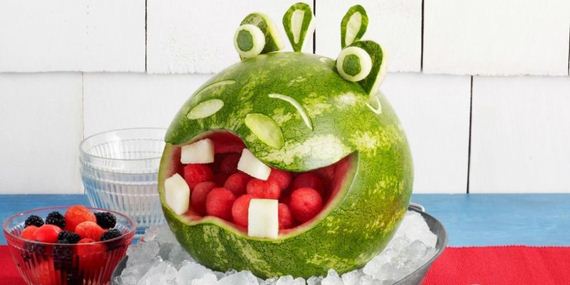 For the bowl Use a permanent marker to draw a simple wave design around the center of a small watermelon. With a large serrated knife, split the melon just above the design. Use a melon baller to scoop out the fruit; discard the top. Use a paring knife to cut along the wave line, discarding the pieces in between the pattern; repeat to smooth the edges. Return the melon balls to the bowl, adding other fruit, if desired.

For the dolphins Slice the stem of a banana, spritz with lemon juice (to keep from browning) and place a small raspberry inside. Poke holes and insert peppercorn eyes, then attach grapefruit gummy candies with toothpicks for fins and a tail, as shown. Position the dolphin inside or next to the wave bowl. 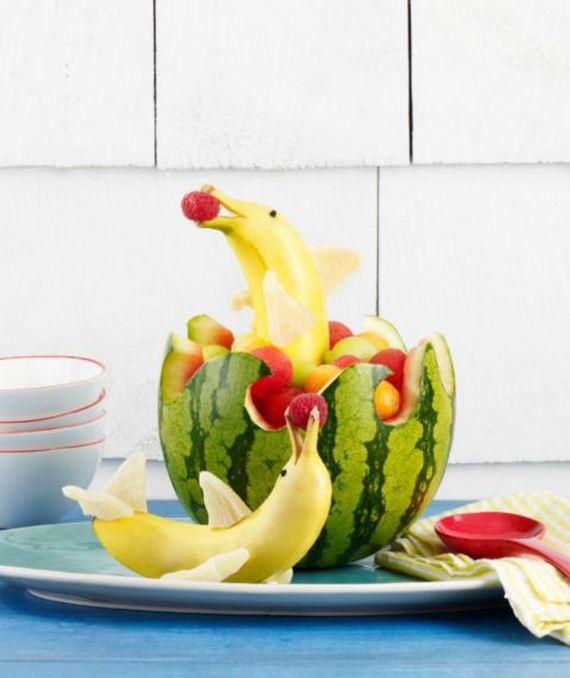 The Tortoise and The Frog

For the tortoise Use a large serrated knife to cut an oval watermelon in half lengthwise. Scoop out the fruit. Draw a shell design in permanent marker on one half and add a matching border on the other half. With a linoleum cutter, trace the shell design to etch away the skin. From a second watermelon, cut five 4-in. pieces of rind for the head and legs; attach to the bottom half using toothpicks. Affix candy eyeballs with corn syrup. Fill with fruit, then use the top shell as a lid.

For the frog With a paring knife, cut a mouth into a round watermelon. From the cutout, carve a watermelon tongue and use a melon baller and the knife to make eyes from the rind; attach using toothpicks. Use a screwdriver to poke nostrils. From a second watermelon, use a large serrated knife to cut off the end, then cut it in half to create the two hind legs. Next, cut two 1-in.-thick wedges for the front legs. Using a paring knife, cut four feet from the rind. Secure, as shown, with toothpicks. When ready to serve, cut into pieces. 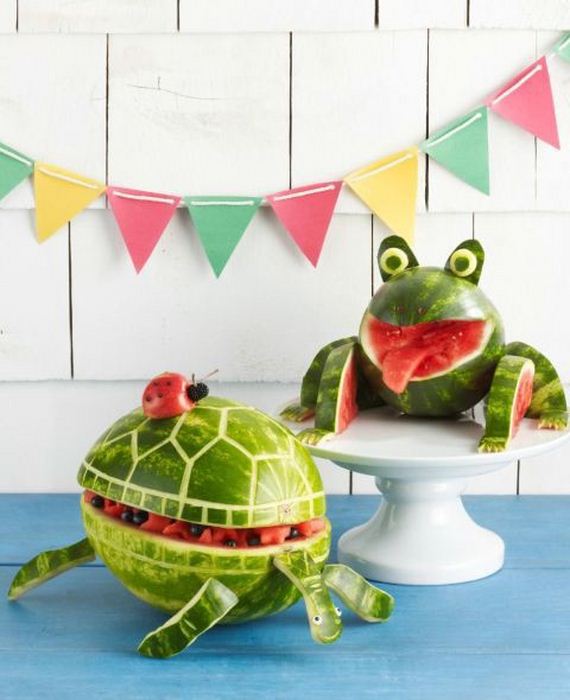