Back In The Days, Cities Used To Have An Official Yellow Pages For Prostitutes 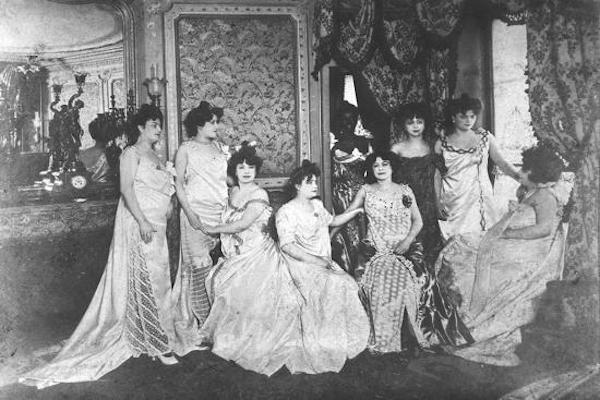 Growing up in a huge metropolitan city, I’m no stranger to the back pages of the weekly free papers that had ads for scantily clad ladies who offered dates and massages, discreetly of course. Whether it was NYC’s Village Voice, Toronto’s NOW or some other city, many a pre-teen day was spent hiding away checking out these listings out of sheer curiosity. Then, the internet happened, and it all moved online. But, I bet you’d never guess that classified listings for prostitutes, escorts and sexual services are almost 200 years old? I didn’t know.

Back in the days where cities were growing rapidly in the late 18th and early 19th century, thousands of people flocked to urban zones, and they all needed entertaining. They also needed some sort of guidebook to where the best times (and best women) were hiding.

Looks like our great-grandparents and their parents, might have liked to get more freaky than we’d suspect. 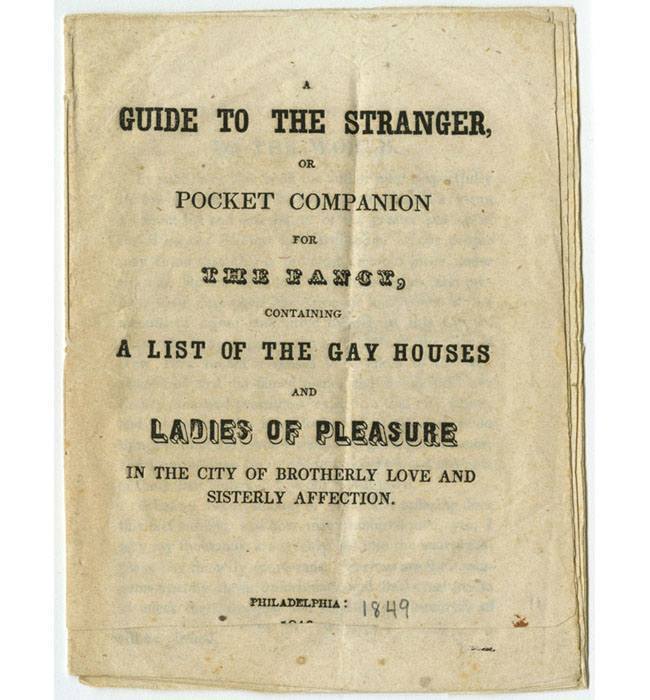 Guide to The Stranger
Philadelphia
This handy guide to the nightlife of Philly was first published in 1849, though it may have existed in a different form prior to that. The book served as a guide to the bathhouses, brothels and houses that could service whatever itches you needed scratched. The author offered reviews and suggestions for what to ask for, but would also call out the places where you were likely to catch a disease. They’d also break down where to go if you were a gentleman versus a rowdy commoner, and where you could catch all variations of shows between women, men, and even animals.

Copies of the book actually exist online and you can read through some of the pages if you so wish. Just note that it’s a lot of old-timey language and some very racist descriptions. 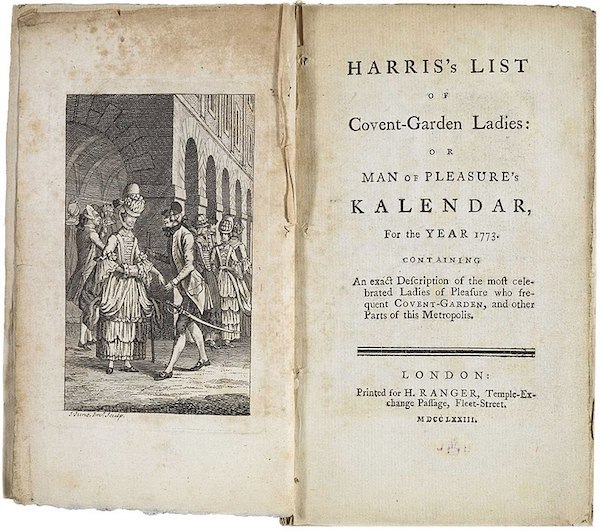 Harris’ List of Covent-Garden Ladies
London
I love this one for its alternate title; Man of Pleasure’s Calendar for the year 1788, and the fact that it was republished every few years for close to a decade. This was a very cheeky guide to local services and could have been purchased at local shops and street stands for 2 shillings. Each edition highlighted 120 women or their houses that they’d recommend.

Considering that the actual number of prostitutes in London in the late 18th Century was between 6 and 7 thousand, getting a shoutout in the Harris guide was an honour.

This book was also unique because it offered prices and descriptions of the women, including bust size and what their genitals resembled. But, poetically, of course. 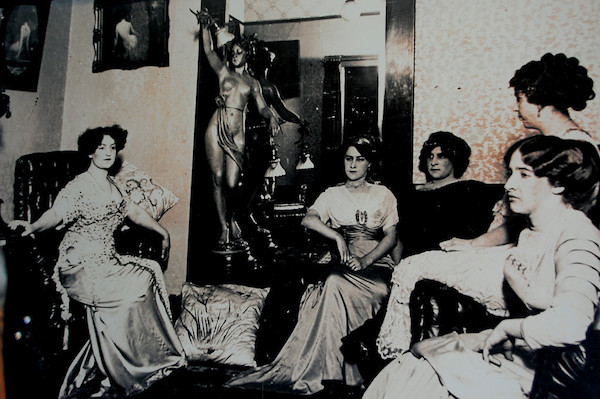 A Vest Pocket Guide to Brothels in 19th-Century New York for Gentlemen on the Go
New York
During the 19th century, NYC encountered a rapid growth, which mean there were a lot of people coming through. You had your share of businessmen, transients, sailors, workers, immigrants and locals roaming the city, so of course, they needed sexy entertainment. This guide offered suggestions about the best options to get yourself some love.

Surviving copies date back to 1870, but there’s a good chance that there were plenty of earlier editions. As well, they were full of anecdotes about the best times that could be had, as well as places, specific madams, and women to avoid. 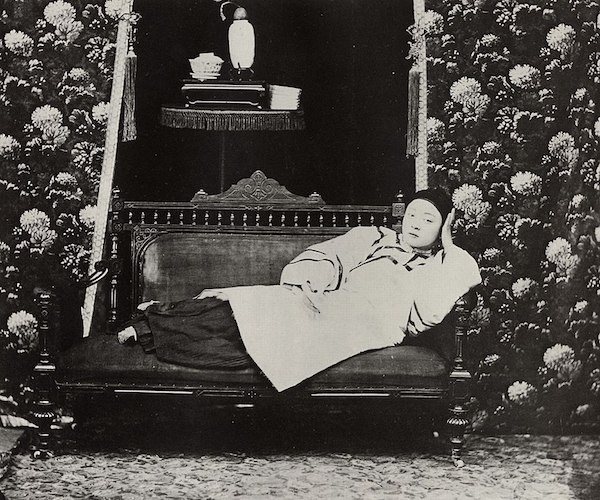 A Complete Look at Shanghai Philandering
China
It wasn’t just the west that relied on these guides to keep men warm. In the late 19th century, Shanghai was an international city that attracted visitors for both business and pleasure. There were several guides, including Precious Mirror of Shanghai, A Sixty-Year History of the Shanghai Flower World, Pictures of the Hundred Beauties of Flowerland and the one in the title, and they were all favourites.

Each book offered biographies of the pros, gave anecdotes about famous customers, and gave names, addresses and reviews of the women. What made these ones unique, however, was that the guides also offered extensive glossaries of the trade language, detailed maps and stern descriptions of the expected behaviour of the clients. 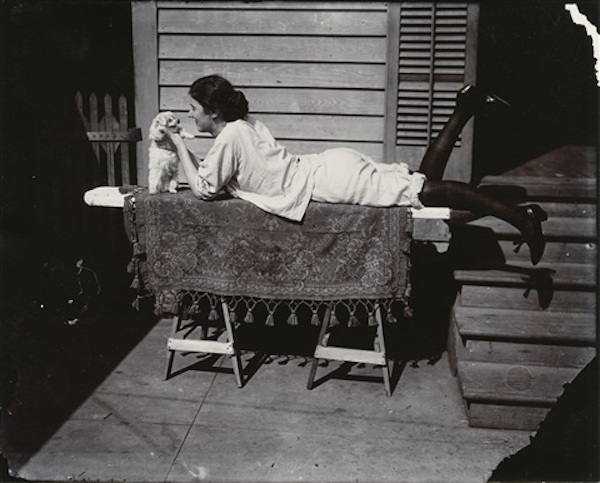 Guidebooks to Sin/Blue Books
New Orleans
It should come as no surprise that New Orleans had a thriving history of sexual services for hire. In fact, they had a whole area in town called “Storyville,” which was their red-light district. And, you guessed it, they had field guides that were both informative and satirical.

Much like the others on this list, they had descriptions, ratings, which ones had particular talents, but also, which houses has the best drinks. Also, a lot of the books had entries written by the pimps and madams, rather than being an independent review, so there was also a ‘buyer beware’ element to it all. 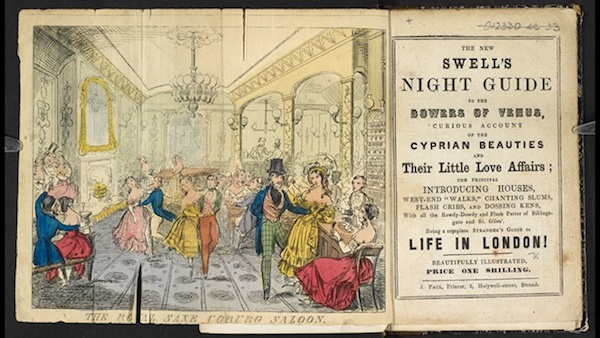 The Swell’s Night Guide to London
London
This book predated the Harris’s List by 30 years, and focused more on ‘night-walkers’ rather than brothels. It also covered other entertainment such as pubs, bars, and gaming. But we all know why the book was originally picked up, right?

What made this one different was the descriptive language – they were graphic and blunt. For example: “You may have your meat dressed to your liking/her flock is in prime condition and always ready for sticking.” No doubts about what to expect here. 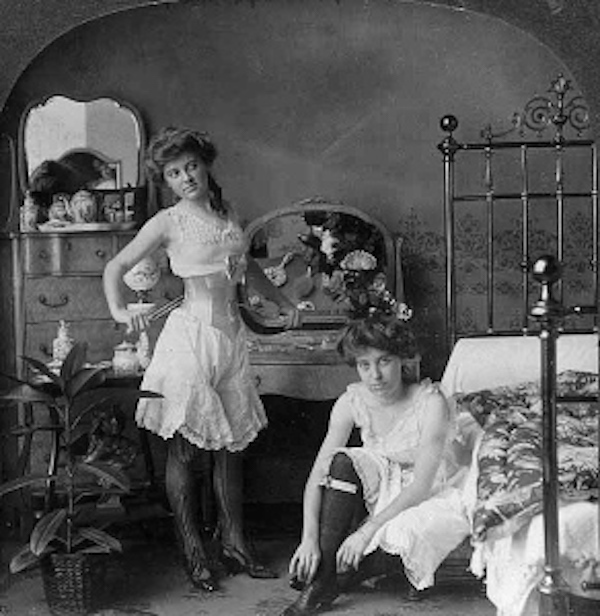 The Town
London
The sex-worker scene in London was so lively in the 18th and 19th centuries, that they not only had the guidebooks, but also a regularly published journal called The Town. This journal, however, was anything but academic. In fact, it was considered sacrilegious and outrageous in its content. Which mean it was pretty widely read. Its intent was to provide the latest information and literature about the “sporty world of sexual pleasure.”

Given that it was more of an actual book, it had vivid and graphic sketches of the ‘women about town,’ articles about the justification of vices, cautionary tales about bad experiences, and the best pubs for backstage shenanigans.

So, essentially the first Playboy. 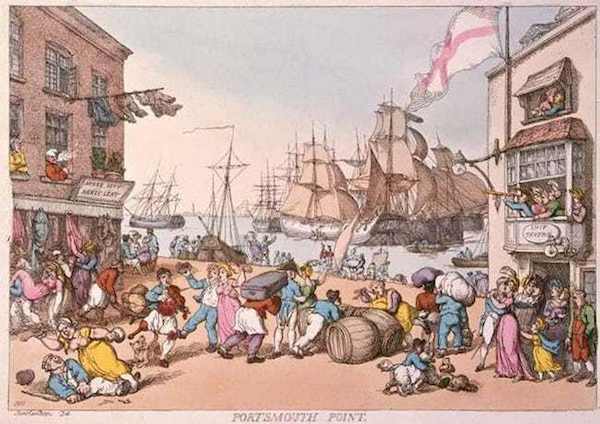 The Lady Juliana – A guidebook to the Floating Brothel
Australia
For 2 centuries, Great Britain had a habit of dumping their desirables on the shores of the New World, aka America. But, after the Revolution in 1776, they needed a new place and they settled on Australia. After a while, they realized that the majority of people that populated this new penal island, were men and it was leading to some unsavoury behaviour and violence. So, it was determined that women needed to be sent to the island as well, to marry or to fuck.

But instead of a proper guidebook, a shipping list was shared with the new Australians, with the names and occupations of the women sent on the Lady Juliana ship, to bring joy and comfort to them. The list was divided into two categories; the professionals and the ‘wives.’ The only difference between the two was that the professionals didn’t want to settle down with anyone, while the other, would do so, under the right circumstances.

Oh, and they were also field tested and rated by the crew on the way over, just to make sure their cargo was exactly as promised. 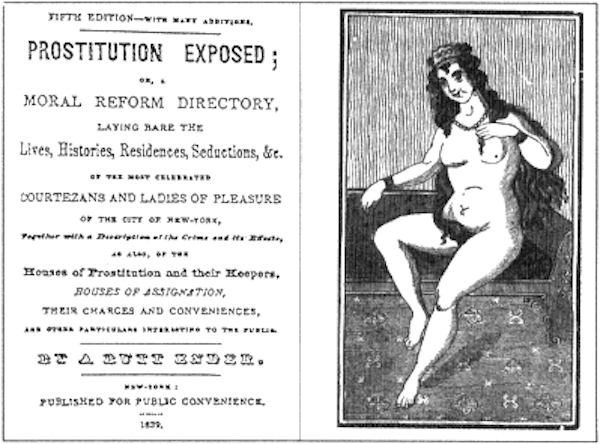 Prostitution Exposed!
New York
This was actually the earliest example of a guide to nightlife. It also had an insane title – PROSTITUTION EXPOSED; or, a MORAL REFORM DIRECTORY, Laying Bare the Lives, Histories, Residences, Seductions, &c. of the most celebrated COURTEZANS AND LADIES OF PLEASURE of the city of New-York, Together with a Description of the Crime and Its Effects, as also of the Houses of Prostitution and the Keepers, HOUSES OF ASSIGNATION, Their Charges and Conveniences, and other particulars interesting to the public.

Except, here’s the catch: this field guide was supposed to be a warning booklet against prostitution. In it, were warnings and cautions against licentiousness, deceitful pros, venereal diseases and ruined reputations. It listed all the places one should avoid; all 266 of them. With addresses.

Instead, it was secretly used as a guide of where the best places were. Also, it was written by someone named A. Butt Ender. Classy. 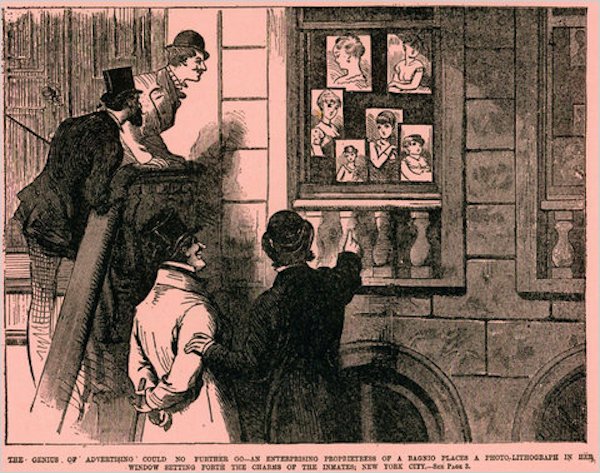 Directory to the Seraglios
US East Coast
Published in 1859, the Directory to the Seraglios in New York, Philadelphia, Boston and all the Principal Cities in the Union was a one-stop shopping guide to all the best sexual things on the east coast and the codes of conduct for them. This one wasn’t any different than the others, but it did promote itself as a passport of sorts for the best places in New York, Boston, Chicago and Philly.

You’d be able to show off your list to the madams and pimps for frequent customer perks.

It was genius, really.