Big Companies Always Have A Ways Of Tricking Us 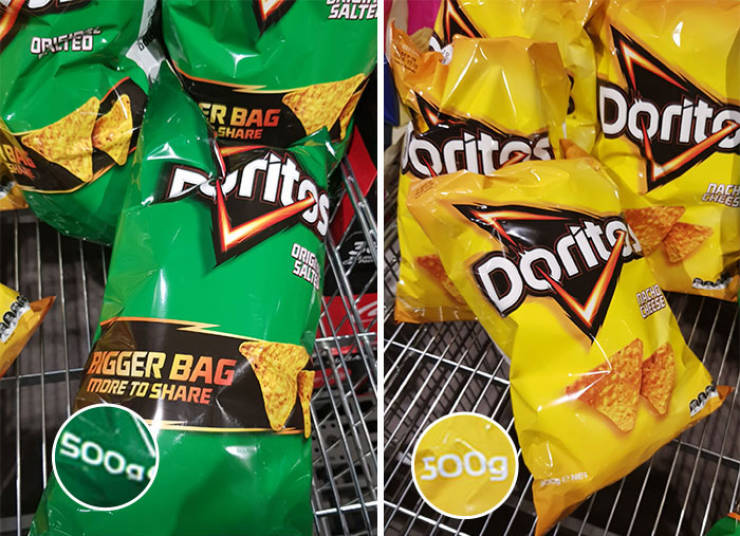 “Last year, someone on Reddit noticed how a “Bigger Bag, More To Share” pack of Doritos actually had the same amount of chips as the regular size pack. “More air to share,” someone joked in the comments.” 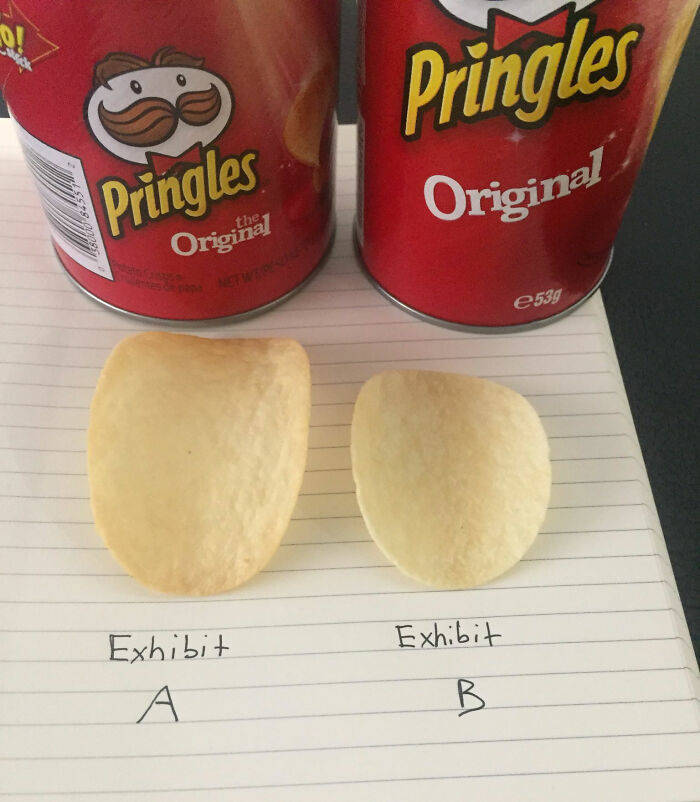 “In 2016, fans of Pringles started noticing how their beloved chips are now smaller. In addition, some noticed that the tube itself also shrunk, making it harder for some people to reach in. Despite that, the price stayed the same. “Is this Pringles can getting smaller or my arm getting fatter?” a consumer went on Twitter to express their concern. The company explained that the reason behind these changes was that manufacturing shifted from the USA to Malaysia. “The equipment we use in Malaysia is a bit different to our sister factory in the US … you’ll notice that both the chip and the can are a little smaller to fit with the production facility,” the company explained.” 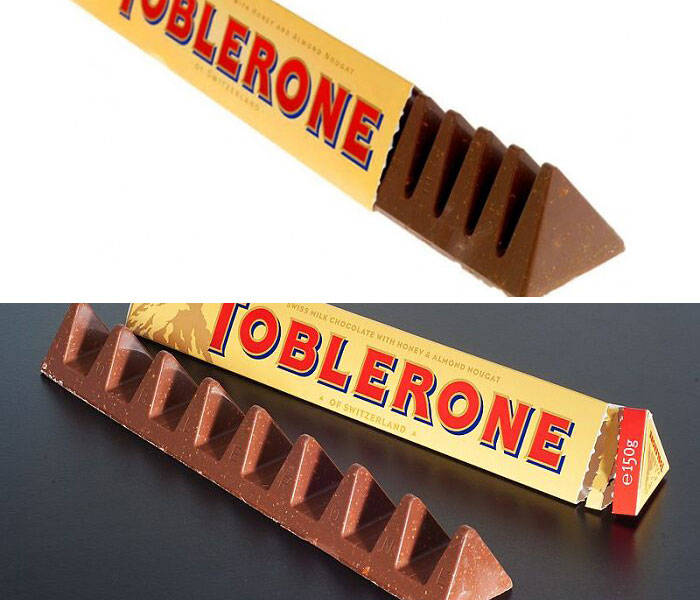 “Back in 2016, Toblerone announced they were altering the iconic design of their UK bars by adding bigger gaps between the mounds, which meant that the bars were about to have 10% less chocolate for the same price. Apparently, the unfortunate change was due to an increase in the price of the ingredients. People weren’t too happy about it, to say the least. Two years later, the company decided to bring back the original shape. Sadly, the price of the bar had to be raised as well.” 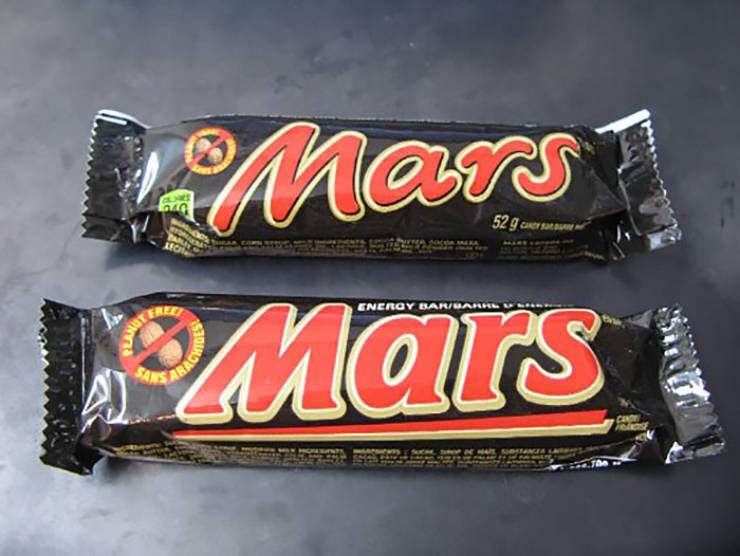 “According to Metro, last year, a man named William Knight happened across a “vintage” 1996 Mars bar in the bottom of an old box in his loft. After measuring the old bar against a modern-day one, the man was surprised how much bigger the “vintage” one was. Despite that, the price of the bar has more than doubled since then.” 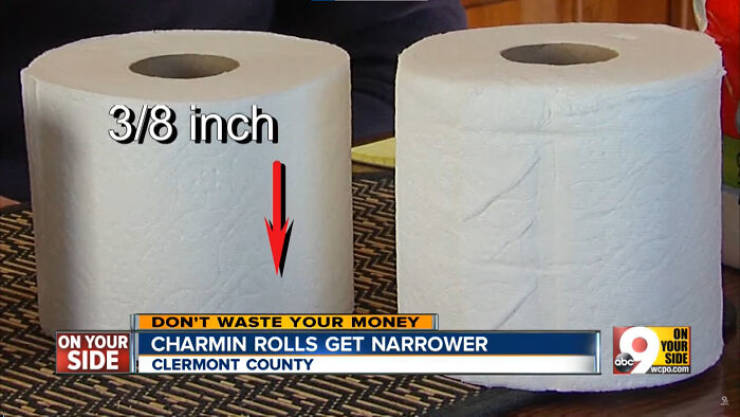 “For quite a while now, the length of toilet paper rolls has been shrinking. Apparently, once upon a time, the standard size of a toilet paper roll was 4.5 inches by 4.5 inches. Fast forward to now, most rolls are a half-inch shorter than they used to be. Despite that, consumers are still paying the same price.” 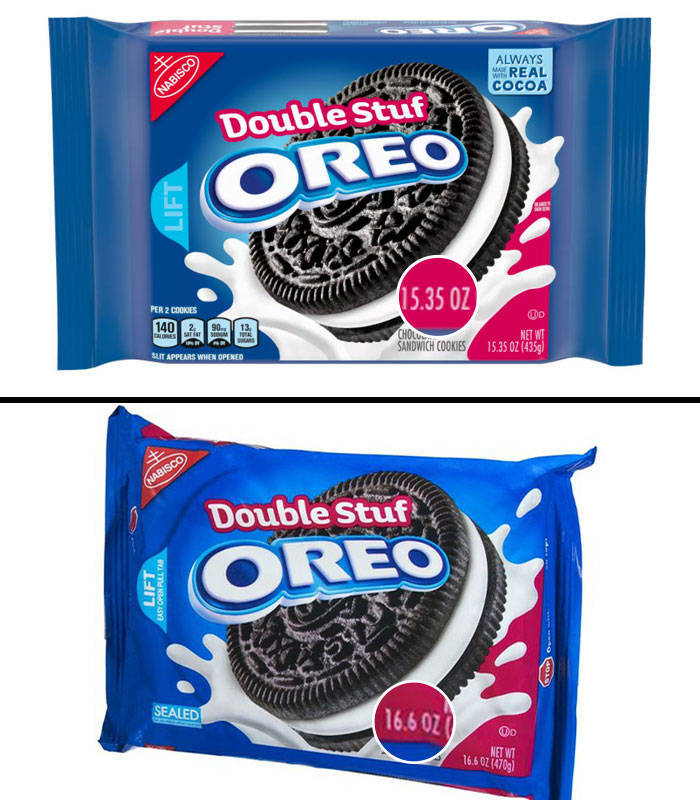 “Throughout the years, a Double Stuf Oreo pack has changed from being 16.6 oz to 15.35 oz and is still being sold for the same price.” 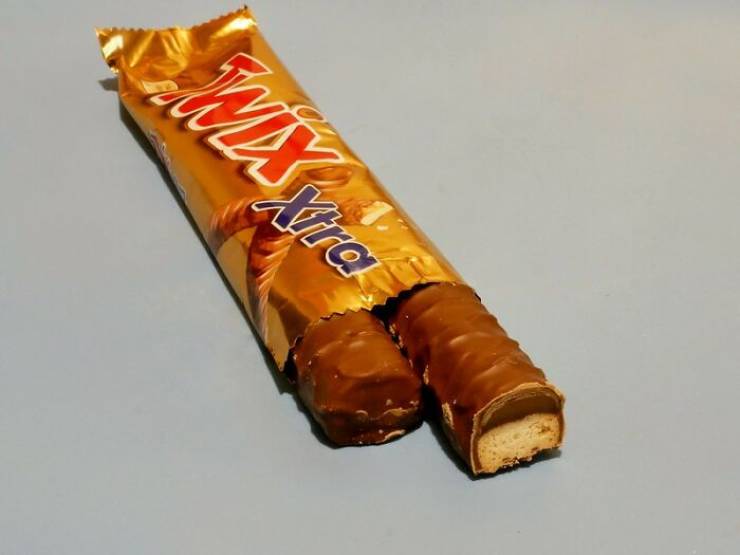 “Many well-known chocolate bars have been shrunken down over time, but their prices haven’t changed. For instance, a Twix bar is now about 14% smaller than it was back in the day. Apparently, in 2012 Mars, Inc. (who make Twix) announced a 250 calorie cap on all single-serve chocolate bars, and because of that, many of their products have been downsized.” 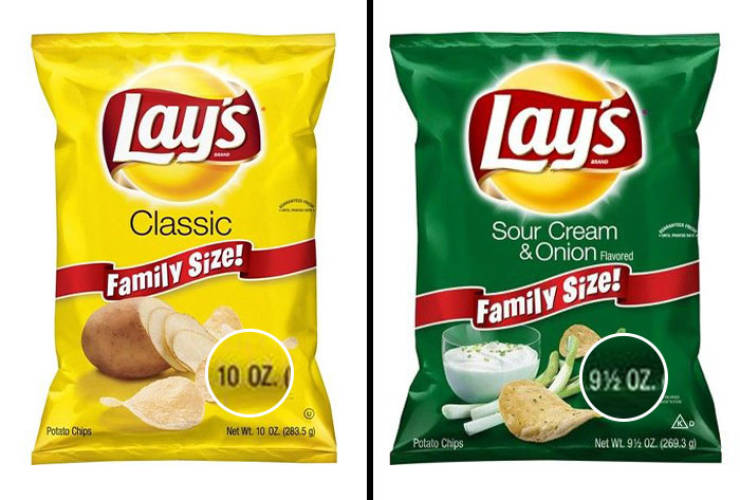 “Turns out, some bags of Lay’s potato chips contain fewer chips than others. Lay’s regular “Family Size” packs are 10 oz., but the company’s bags of flavored chips are 9.5 oz, yet both sell for the same price. According to the Associated Press, the difference is equivalent to approximately 5-6 chips.” 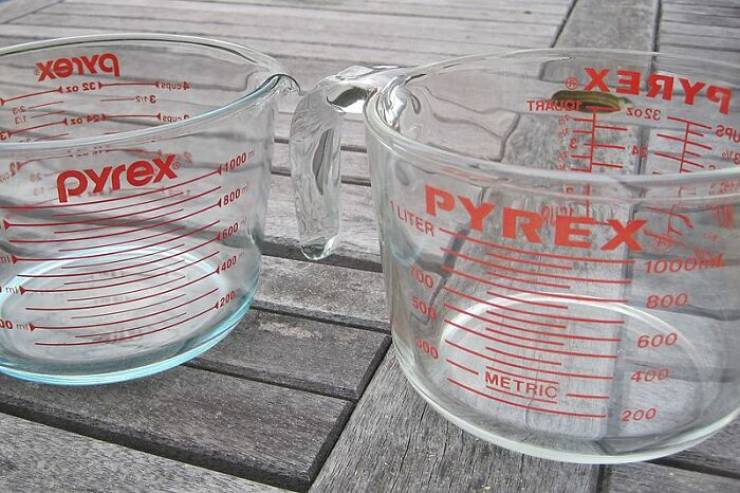 “For a long time, the clear glass cookware brand Pyrex was known for making fireproof glassware. Ironically, a few years ago, the pans started exploding when they got too hot. Apparently, the manufacturer switched to a cheaper ingredient that strengthened the glass against being dropped but weakened it against thermal shock.” 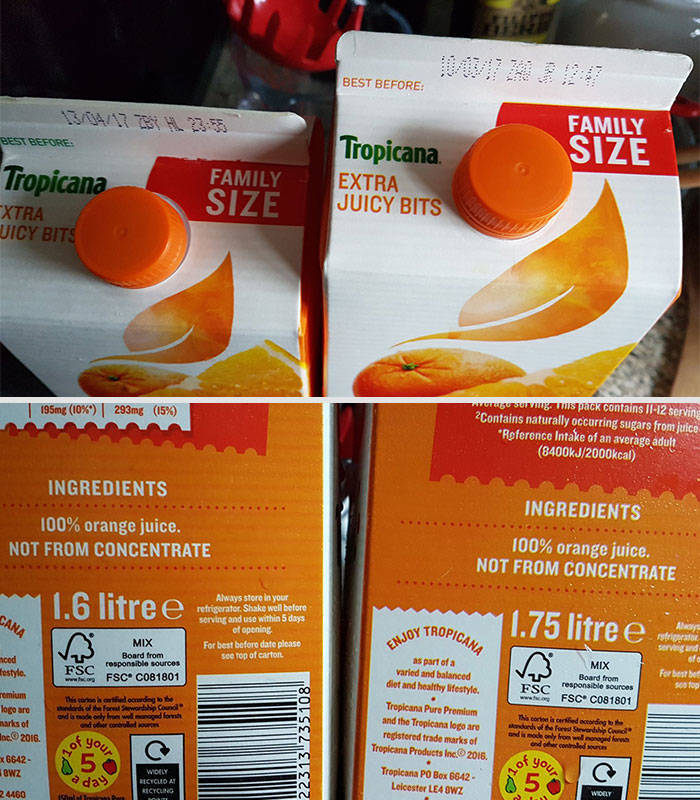 “Back in 2017, consumers started noticing that the size of family-size cartons of Tropicana downsized by almost 9 percent. Despite the change, the price remained the same.” 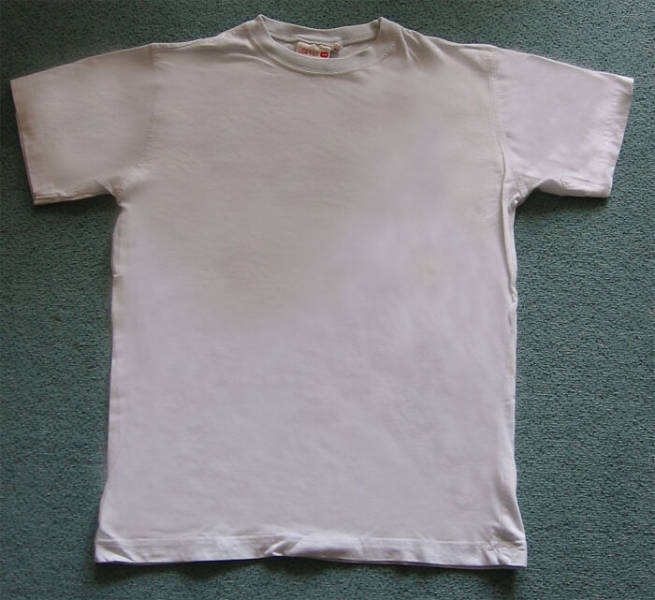 “Turns out, some brands replace cotton in their “tissue tees” with cheaper and much thinner synthetic fabric. Because of that, these t-shirts appear almost see-through.” 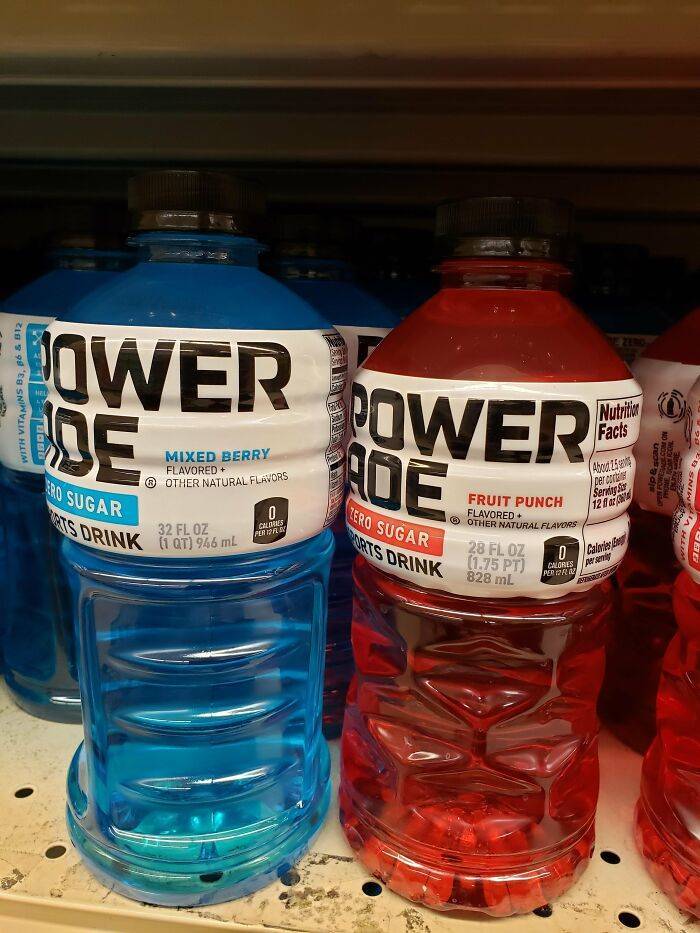 “At the beginning of this year, someone on Reddit noticed that Powerade was also affected by shrinkflation. Apparently, the original 32 oz bottles were downsized to 28 oz, but the price remained exactly the same.” 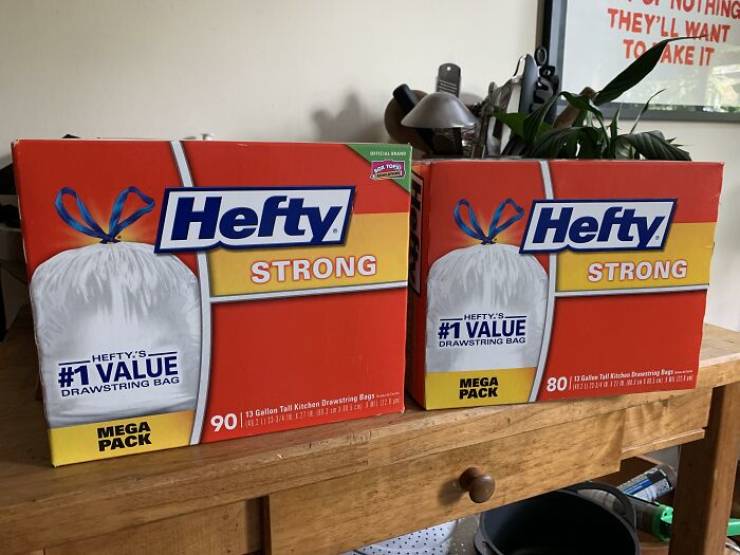 “A month ago, a user on Reddit shared how they’ve noticed that Hefty bag cartons went from containing 90 bags to containing 80. Despite that, the price stayed exactly the same.” 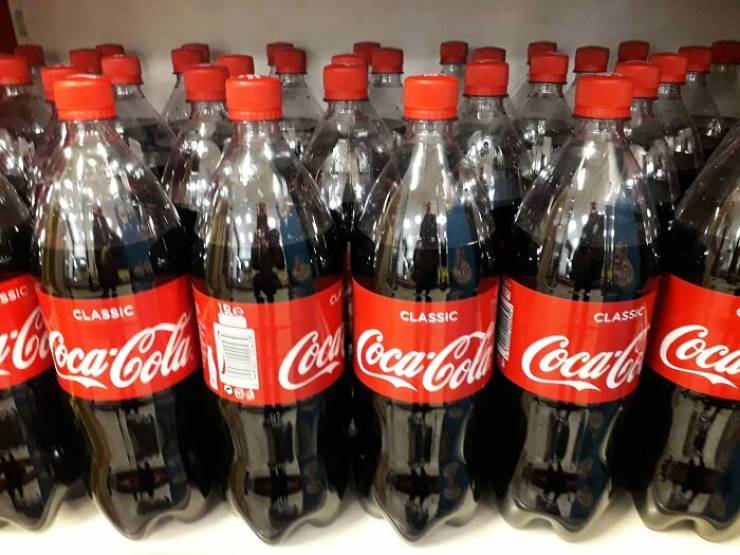 “In 2014, Coca-Cola reduced the size of their large bottle from 2 liters to 1.75 liters. However, the price remained the same.” 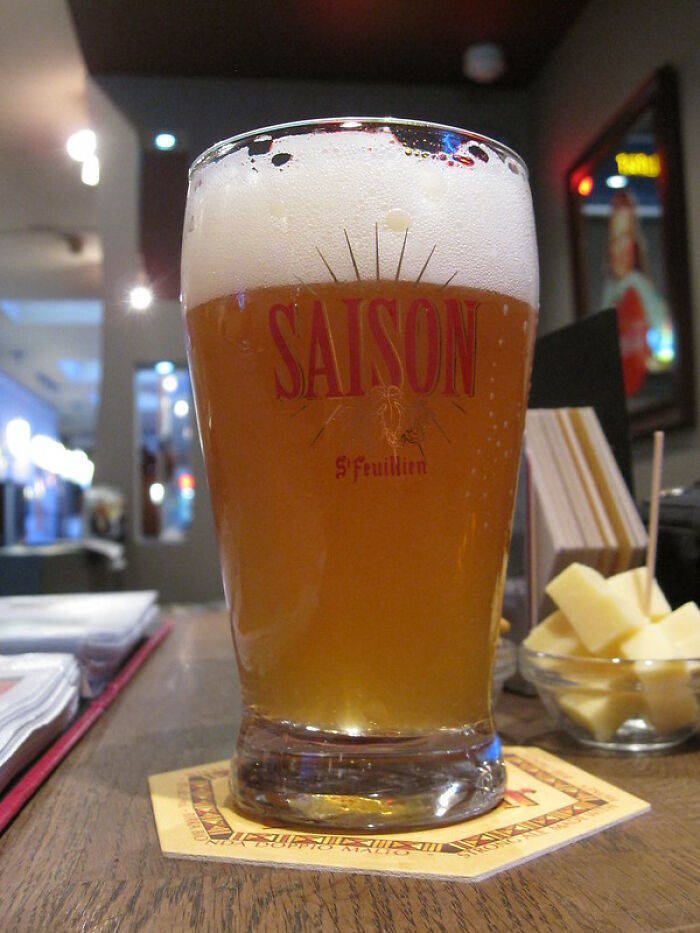 “As you may know, a standard US pint is 16 oz. Apparently, some bars in US practice “short pouring” their customers by using glasses that are only 14 oz. Since these glasses are the same size as the real ones, though, most customers tend to not notice it. These glasses are usually called “falsies” or “cheater pints.”” 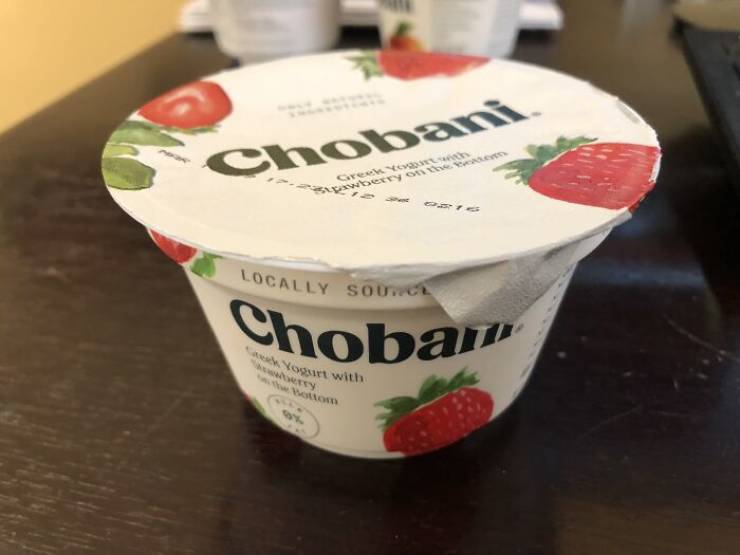 “A few years ago, the New York-based yogurt company Chobani decided to downsize some of its yogurts from 6 oz to 5.3 oz. Despite that, the price of the yogurt hadn’t changed. Customers weren’t too happy about it. The company explained that the change was to improve consistency with its newly launched products as well as competitors who favored the 5.3-ounce pots, so it could be easier for consumers to compare nutritionals.” 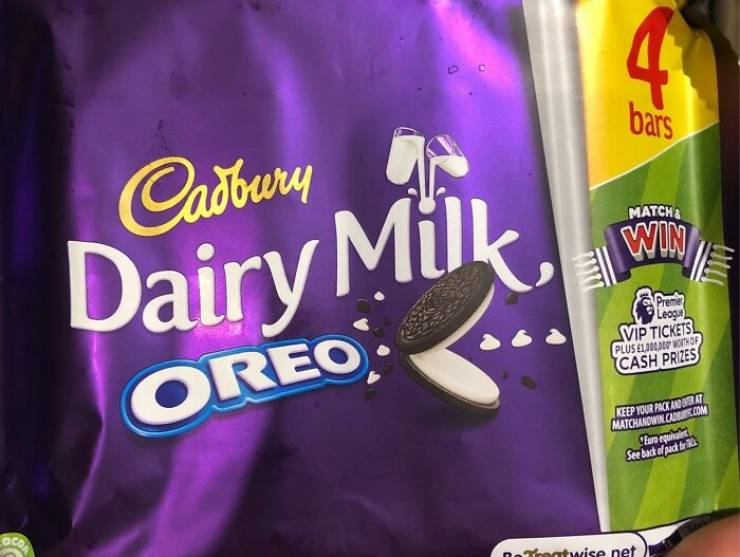 “Cadbury announced that by the end of 2021, they’re going to reduce the calorie count of bars that are sold in multipacks. According to BBC, the four-packs packs of these popular sweets are about to contain no more than 200 calories each. “We must play our part in tackling obesity and are committed to doing so without compromising on consumer choice,” said Louise Stigant, UK managing director at Mondelez International, according to BBC. However, they’re not planning on changing the price.” 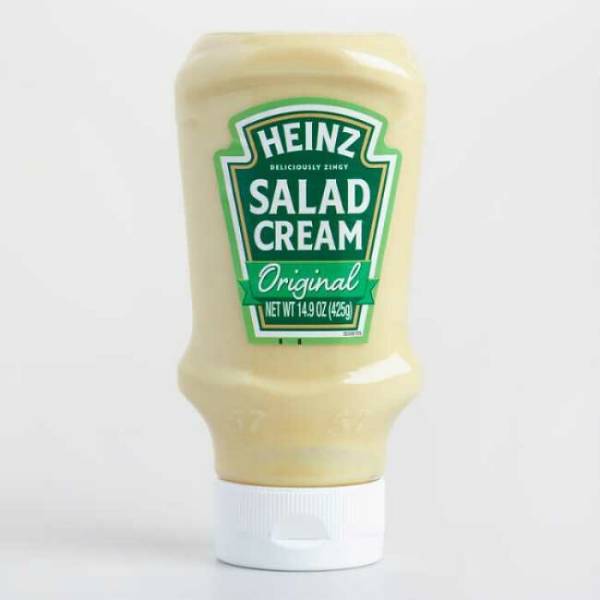 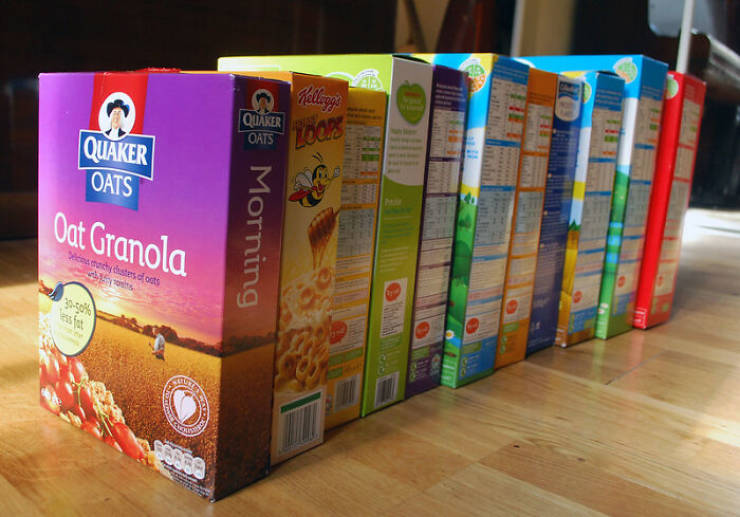 “Customers have been noticing that throughout the years many cereal brands have been reducing the amount of cereal they’re selling in a box while keeping the price the same. Many brands have been making the boxes thinner, so from first sight, it appears to be the same size as it used to be.”

Previous No, You Can’t Eat This!
Next 27 Hilarious Food Memes