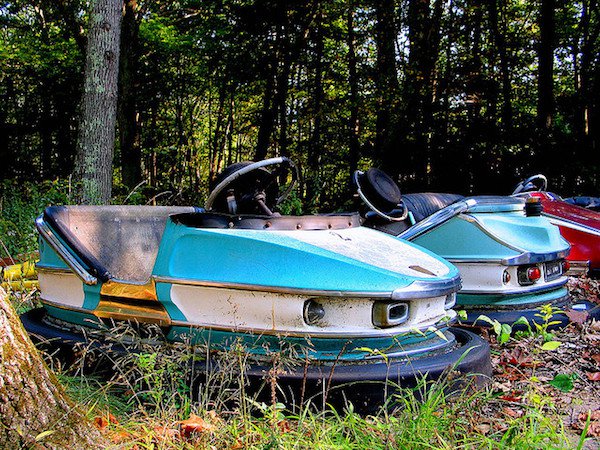 There’s nothing more creepy than an abandoned structure that was once meant for fun, and is now just depressing. If you cruise down America’s highways, you’re guaranteed to stumble across some of these monuments to a lost time. We’ve already covered some of these abandoned parks and roadside attractions HERE, but there’s so many more icons to lost dreams.

You can still hear the laughter of children and the faint smell of popcorn, can’t you? I can. 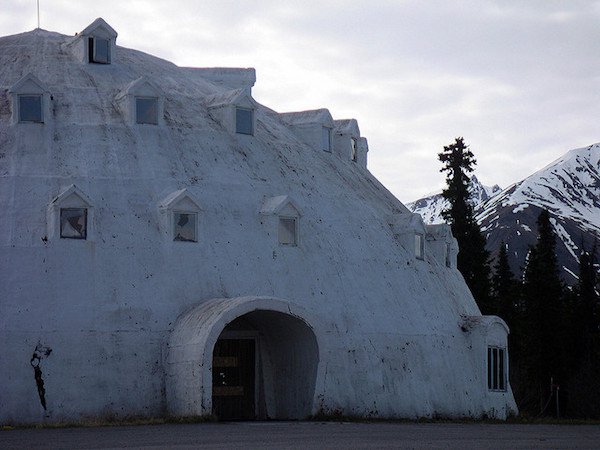 Igloo City
Cantwell, AK
The 70’s were a weird time, and there were some crazy ideas when it came to hotels and architecture. For example, someone thought that people would want to visit an igloo-themed hotel, 200 miles from civilization in Alaska of all places. Fortunately, the hotel never opened, as the buildings windows were too small to meet construction codes, and now it’s a dilapidated and creepy set of abandoned igloos, in the middle of nowhere. 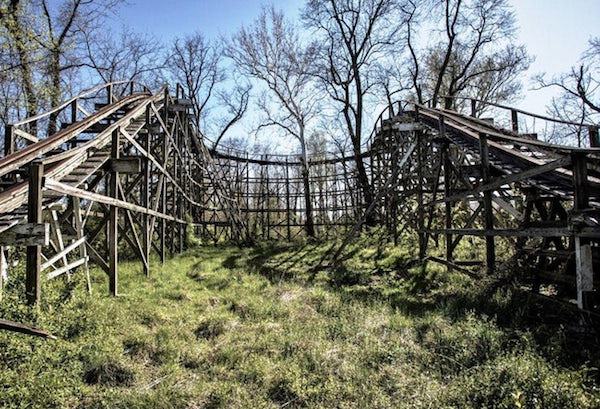 Williams Grove Amusement Park
Mechanicsburg, PA
Old amusement parks can be creepy enough with their carnival rides, pipe organ music and clowns, but when they’re left abandoned, they take on a new level of goosebumps. This park started as a picnic area in 1850, and by 1928 rides appeared including the iconic Cyclone roller coaster. The park was almost completely destroyed by Hurricane Agnes in 1972, and was rebuilt. It only lasted until 2005, when it was permanently shuttered. 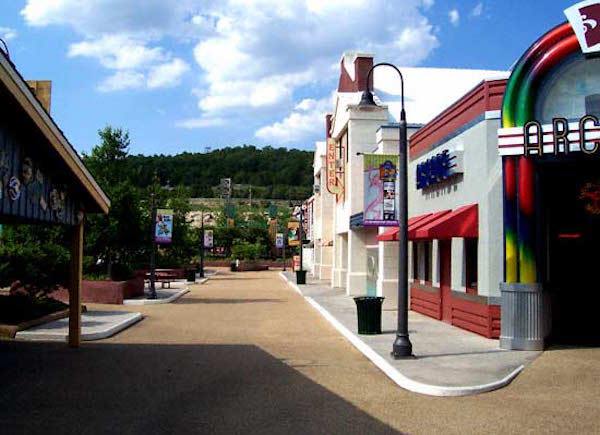 Celebration City
Branson, MO
A theme park built around the idea of America in the 20th century, it had areas based on Route 66, 1900’s small town America and a 1920’s boardwalk. It was only open from late afternoon to evening and lasted from 2003 to 2008. It didn’t meet financial expectations and closed in ’08, and left to the elements. 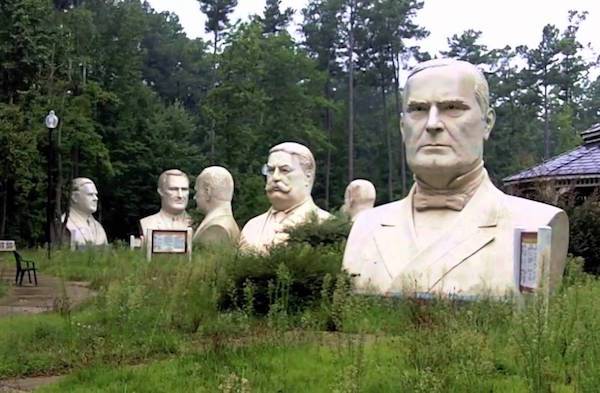 Presidents Park
Williamsburg, VA
Considering how much of a tourist draw Mount Rushmore is, it’s surprising that this creepy statue park didn’t become a huge success. I’d drive all day to see 18-20 foot tall statues of all the US Presidents leading up to George W. Bush. Opened in 2004, it lasted until 2010 when the park was closed. The busts were moved to a local farm, where they sit abandoned and alone – just staring at nothing. 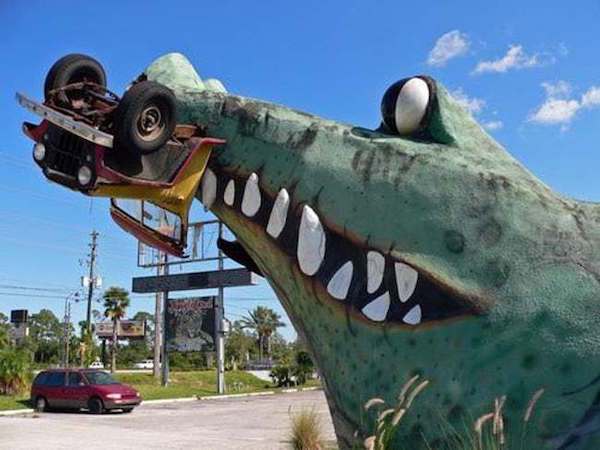 Jungleland Zoo
Kissamee, FL
Beginning as Alligatorland in the 1970’s this zoo had over 1600 exotic animals and birds, and featured a 126-foot long alligator in front of a gator-themed motel. Sold to a new owner in 1995, it became Jungleland Zoo and dropped down their animal count to 300 after several lawsuits, escaped lions, excess monkey shit and balding animals caused a decline in attendance. By 2002, the park was closed and now has all of it’s thousands of cages sitting opened and empty. 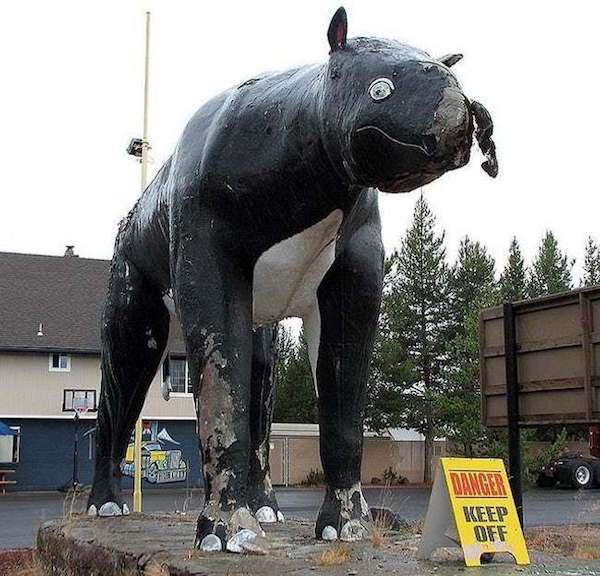 Thunderbeast Park
Chiloquin, OR
This park lies eerily abandoned along Oregon’s State Highway 97. Opened in 1962, it was meant to be a portal to the past, with dinosaur statues hidden within a forest setting. Now it’s a link to an abandoned time. Closed in 1995, no one knows why it didn’t last, but I’m guessing it’s the statues. They’re creepy. 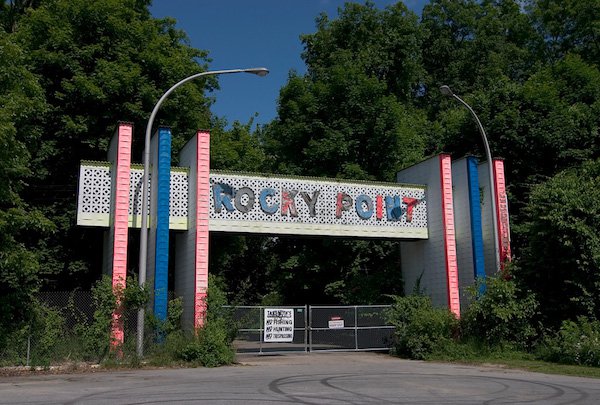 Rocky Point Amusement Park
Warwick, RI
In operation from the 1840’s to 1995, this park was the destination of an idyllic Rhode Island summer of roller coasters, seaside air and chowder. By 1996, the park declared bankruptcy and was left abandoned and desolate. 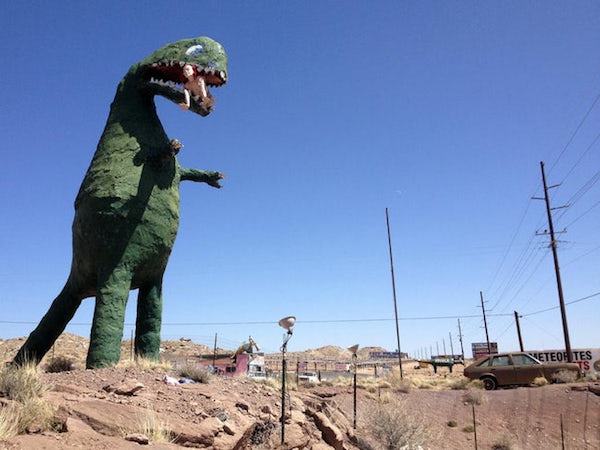 Stewart’s Petrified Wood
Holbrook, AZ
There’s something about Arizona and a fascination with giant concrete dinosaurs. This isn’t an amusement park, but a store that used to sell petrified wood items, dinosaur bones/dung as well as kitschy crafts. As well, there’s giant dinosaurs, eating mannequins wrapped in christmas lights. 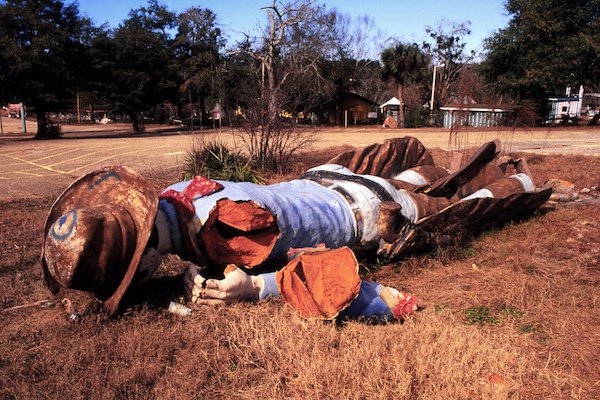 Styx River Water World
Robertsdale, AL
If you were living in Alabama between 1977 and 1993, this was the place to be. Between all the waterslides, they had large, fibreglass statues of random animals, cowboys and other random shit. But naming a waterpark after the mythological river of the dead, has it’s drawbacks. Now, it’s a creepy graveyard of fallen statues and dangerous structures. 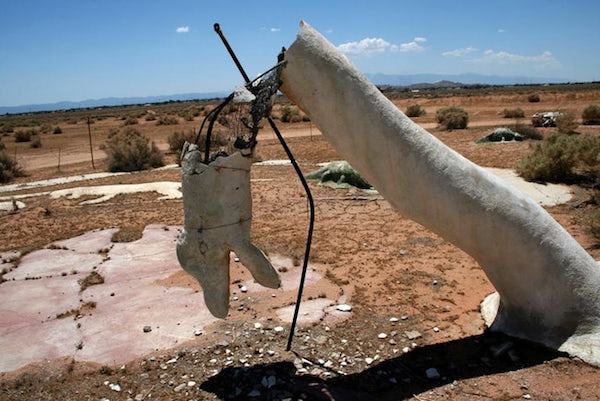 Rancho Dinosaur
Apple Valley, CA
This creepy park was supposed to be a mini-golf course in the middle of the dessert, surrounded by concrete dinosaurs. The plan was never completed, and now the dinosaurs are crumbling, creating a modern-day dino graveyard. 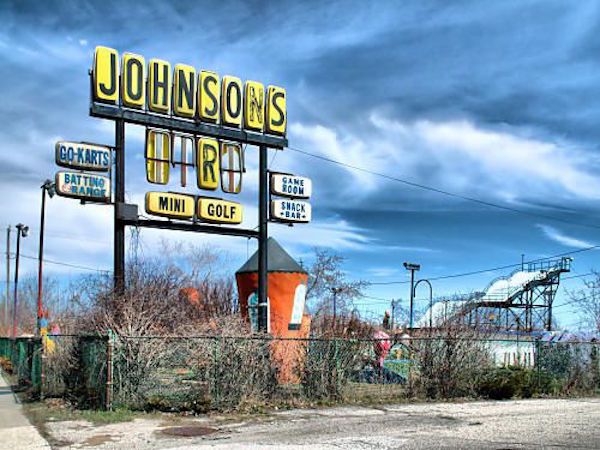 Johnson’s Park
Milwaukee,WI
Starting off with good intentions, this park was an amusement joint with a waterslide, Go-Karts, and a mini-golf course. Started in the 1960’s it was a summer staple until the 90’s when it closed. Most of the park remained standing until 2007 when the park was demolished except for a giant dinosaur. 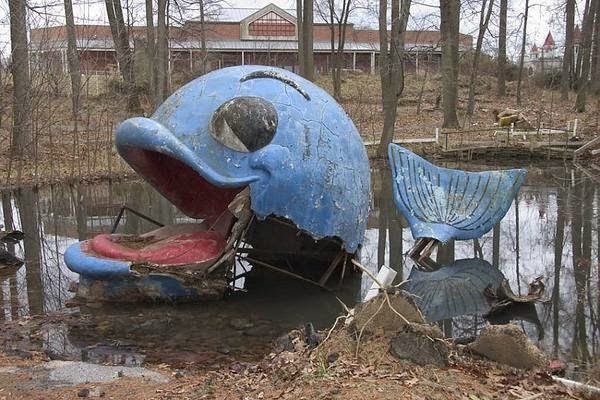 Enchanted Forest
Hope Valley, RI
It’s always the fairy tale-themed ones that look the worst when they’re left to nature. This park operated from 1971 to 2005 and was the childhood destination of many an islander. As it goes, the company ran out of money and abandoned the park. Shuttered and left alone, everything is still there, creating a creepy landscape of dying fairy tale characters.

Abandoned childhood memories are the stuff of nightmares.