Fascinating Pictures That You Definitely Didn’t See In History Class

These pictures have an incredible story to tell.

Microsoft founders Bill Gates(13) and Paul Allen(15) connect to a PDP-10 computer at the University of Washington, through a teletype terminal at their Lakeside School in Seattle in 1968. Paul Allen describes meeting Bill Gates at the teletype machine: One day early that fall, I saw a gangly, freckle-faced eighth-grader edging his way into the crowd around the Teletype, all arms and legs and nervous energy. He had a scruffy-preppy look: pullover sweater, tan slacks, enormous saddle shoes. His blond hair went all over the place. You could tell three things about Bill Gates pretty quickly. He was really smart. He was really competitive; he wanted to show you how smart he was. And he was really, really persistent. After that first time, he kept coming back. Many times he and I would be the only ones there. Bill came from a family that was prominent even by Lakeside standards; his father later served as president of the state bar association. I remember the first time I went to Bill’s big house, a block or so above Lake Washington, feeling a little awed. His parents subscribed to Fortune, and Bill read it religiously. One day he showed me the magazine’s special annual issue and asked me, “What do you think it’s like to run a Fortune 500 company?” I said I had no idea. And Bill said, “Maybe we’ll have our own company someday.” He was 13 years old and already a budding entrepreneur. Where I was curious to study everything in sight, Bill would focus on one task at a time with total discipline. You could see it when he programmed—he’d sit with a marker clenched in his mouth, tapping his feet and rocking, impervious to distraction. He had a unique way of typing, sort of a six-finger, sideways scrabble. There’s a famous photograph of Bill and me in the computer room not long after we first met. I’m seated on a hard-back chair at the teleprinter in my dapper green corduroy jacket and turtleneck. Bill is standing to my side in a plaid shirt, his head cocked attentively, eyes trained on the printer as I type. He looks even younger than he actually was. I look like an older brother, which was something Bill didn’t have 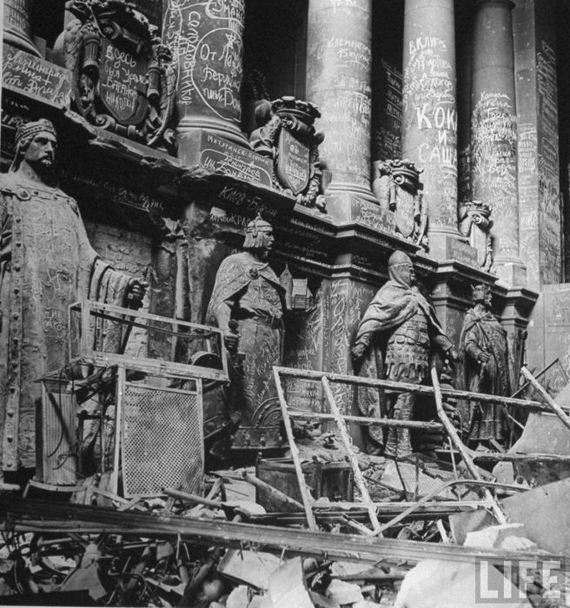 The Reichstag covered in graffiti after being seized from the Nazis by the Red Army, 1945. After seizing the Reichstag in May 1945 and raising their flag on its roof, Soviet soldiers left their marks in other ways, writing their names, feelings, thoughts and hometowns on the walls of the famous building. Written in Cyrillic script, they include such slogans as “Hitler kaputt” and names of individual soldiers. Most of the writings are just “From [Russian City] to Berlin” or just “[Russian City] – Berlin” with a name or “Kilroyski was here”. 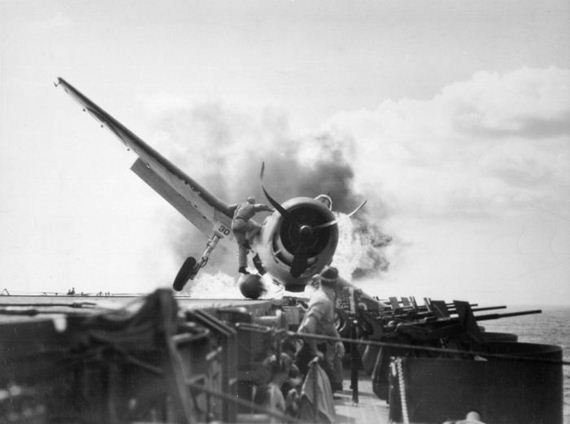 The catapult officer risks his life saving the pilot from a crashed and burning Hellcat on the USS Enterprise, 1943 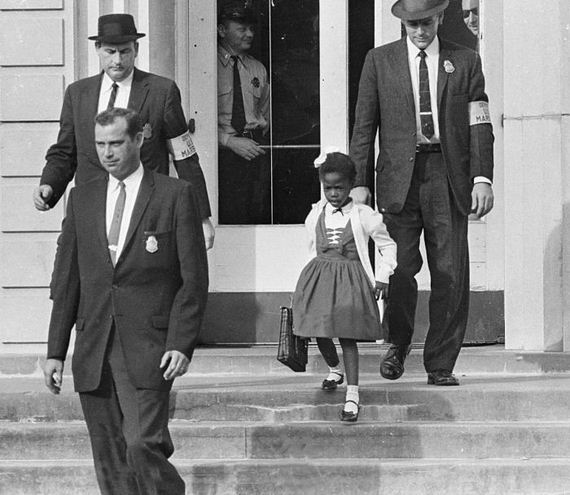 Ruby Bridges, the first African-American to attend a white elementary school in the deep South, 1960. On the morning of November 14, 1960, federal marshals drove Ruby and her mother five blocks to her new school. While in the car, one of the men explained that when they arrived at the school, two marshals would walk in front of Ruby and two would be behind her. As soon as Bridges entered the school, white parents pulled their own children out; all the teachers refused to teach while a black child was enrolled. Only one person agreed to teach Ruby and that was Barbara Henry, from Boston, Massachusetts, and for over a year Henry taught her alone, “as if she were teaching a whole class”. That first day, Bridges and her adult companions spent the entire day in the principal’s office; the chaos of the school prevented their moving to the classroom until the second day. On the second day, however, a white student broke the boycott and entered the school when a 34-year-old Methodist minister, Lloyd Anderson Foreman, walked his 5-year-old daughter Pam through the angry mob, saying, “I simply want the privilege of taking my child to school…”. A few days later, other white parents began bringing their children, and the protests began to subside. Every morning, as Bridges walked to school, one woman would threaten to poison her; because of this, the U.S. Marshals dispatched by President Eisenhower, who were overseeing her safety, allowed Ruby to eat only the food that she brought from home. The Bridges family suffered for their decision to send her to William Frantz Elementary: her father lost his job, the grocery store the family shopped at would no longer let them shop there, and her grandparents, who were sharecroppers in Mississippi, were turned off their land. She has noted that many others in the community, both black and white, showed support in a variety of ways. Some white families continued to send their children to Frantz despite the protests, a neighbor provided her father with a new job, and local people babysat, watched the house as protectors, and walked behind the federal marshals’ car on the trips to school. 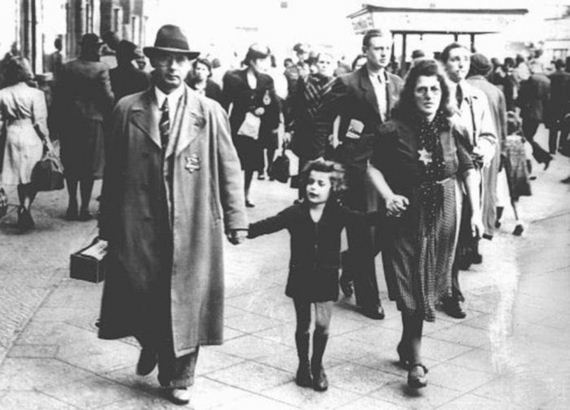 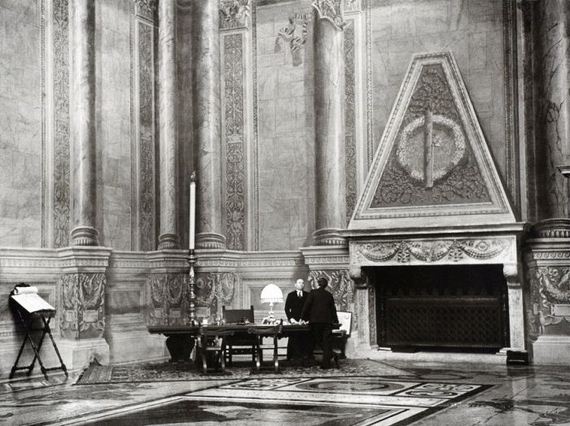 Adolfo Hitler talking to Mussolini through the window of a train in Brennero, 1940 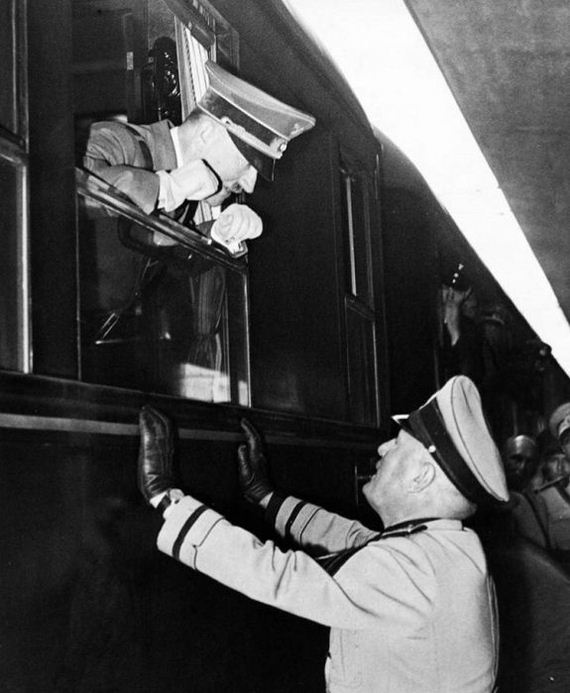 “Mountain Chief” recording Blackfoot songs for the Smithsonian in 1916 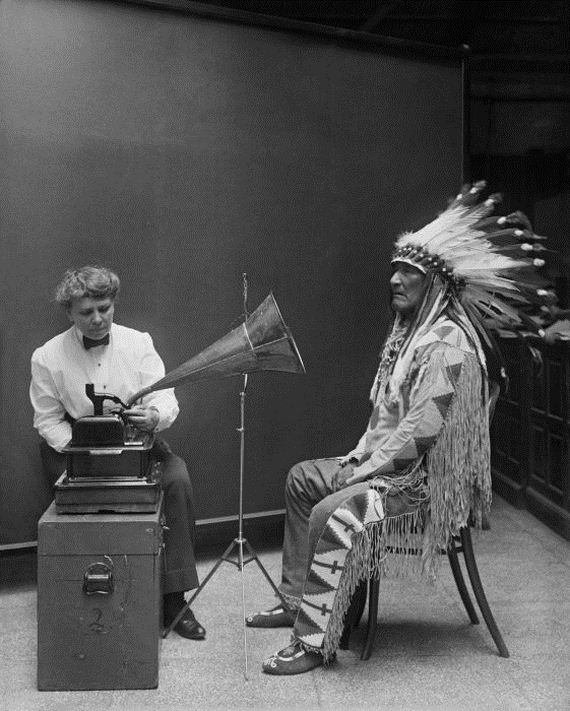 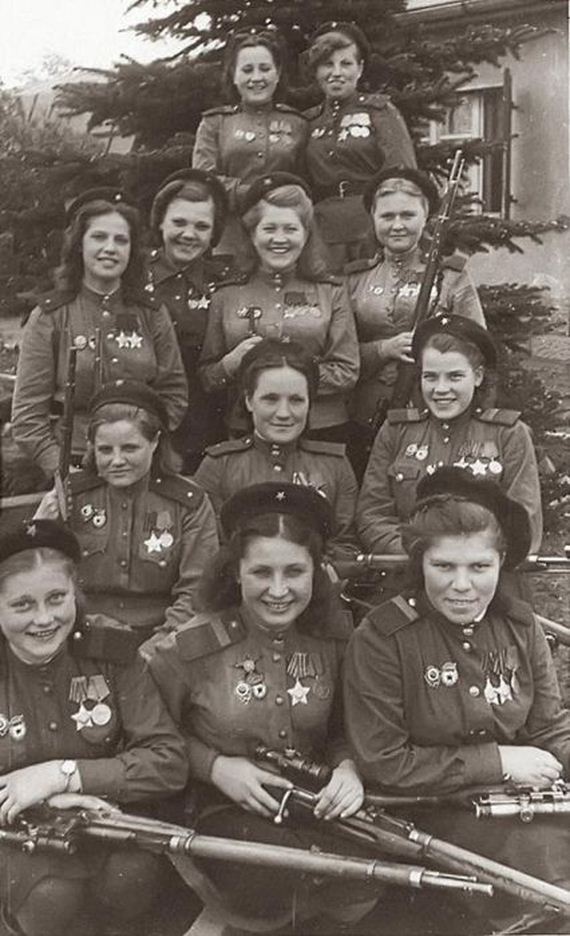 Soilders paying tribute to 8 million donkeys, horses and mules that died during WW1 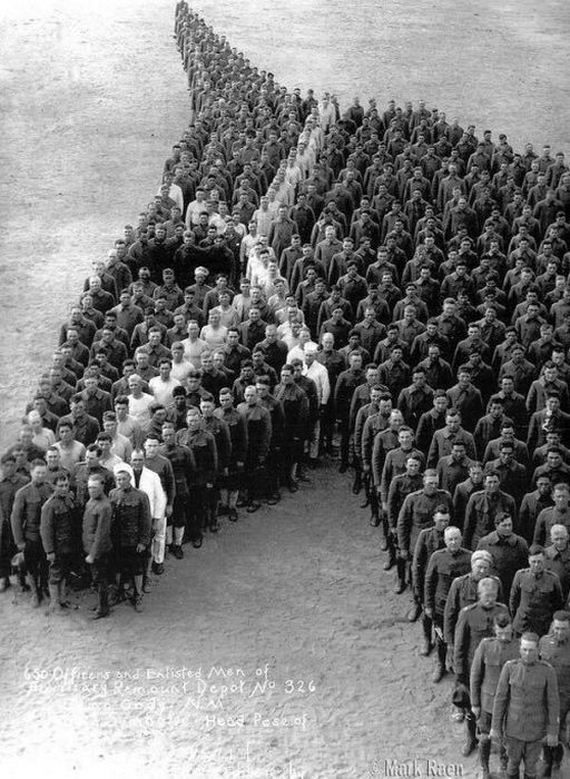 Lyndon B. Johnson yelling at the pilots of a nearby plane to cut their engines so that John F. Kennedy could speak as Kennedy is seen trying to calm him down. Taken during the 1960 presidential campaign in Amarillo, Texas 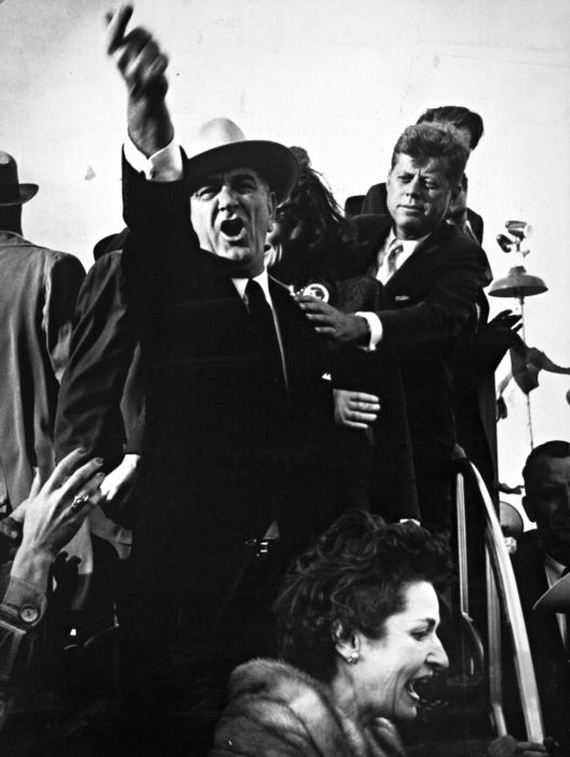 Burlington Mayor Bernie Sanders picks up trash on his own in a public park after being elected in 1981, his first electoral victory 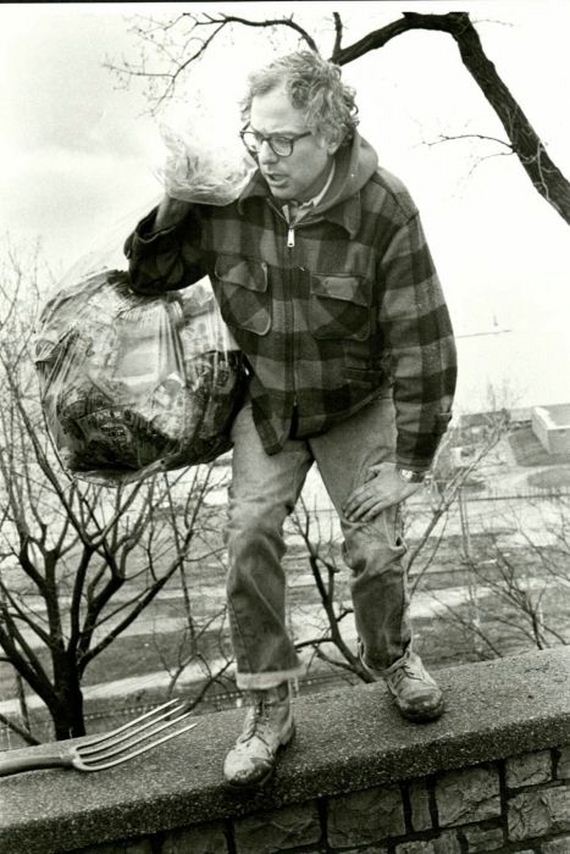 An American soldier says goodbye to his wife and infant child in Pennsylvania Station before shipping out for service in World War II. New York City,1943 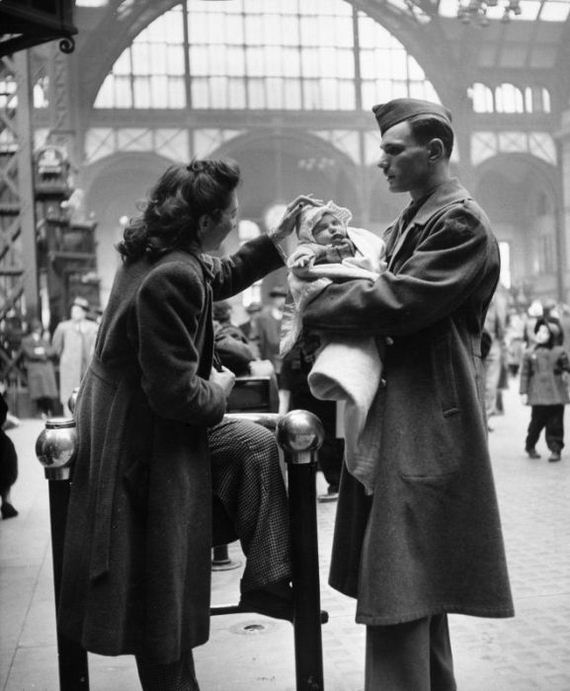 Soviet gym teachers parade in Moscow, 1956. The Russian word used in the original title, “физкультурники“, is now usually translated as “gym teachers”, but at the moment of the parades meant “sportsmen/bodybuilders or athletes”. This is a legacy of Stalin era propaganda parades to promote physical fitness, mainly to make the people ready for heavy labor, possible wars and improve health of the nation. 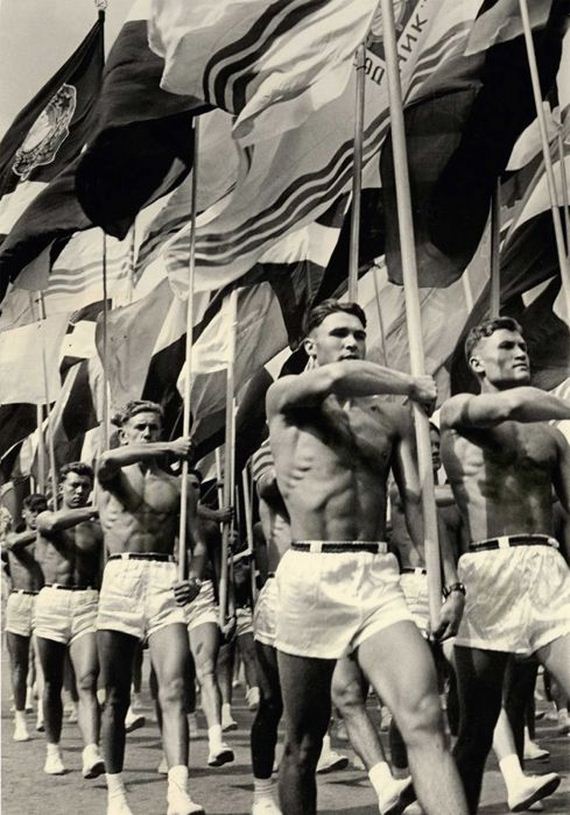 The Royal Navy on the way home from France with Queen Victoria on board, who had just visited Napoleon III, 1858 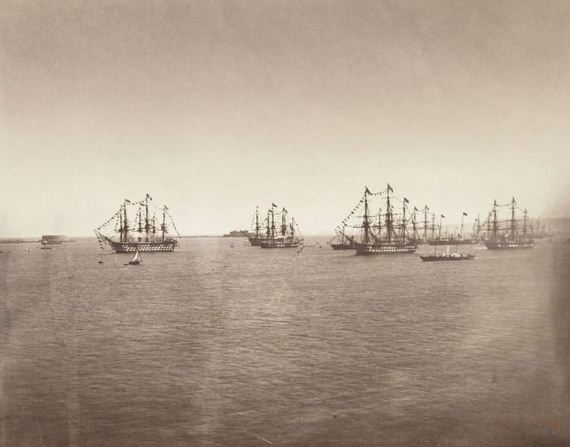 Residents of West Berlin show children to their grandparents who reside on the Eastern side, 1961. The building of the Berlin Wall in August 1961 divided families and neighborhoods in what had been the capital of Germany. The Wall represented a uniquely squalid, violent, and ultimately futile, episode in the post-war world. Life was changed overnight in Berlin. Streets, subway lines, bus lines, tramlines, canals and rivers were divided. Family members, friends, lovers, schoolmates, work colleagues and others were abruptly separated. In some cases, children who had been visiting their grandparents on the other side of the border were suddenly cut off from their parents. 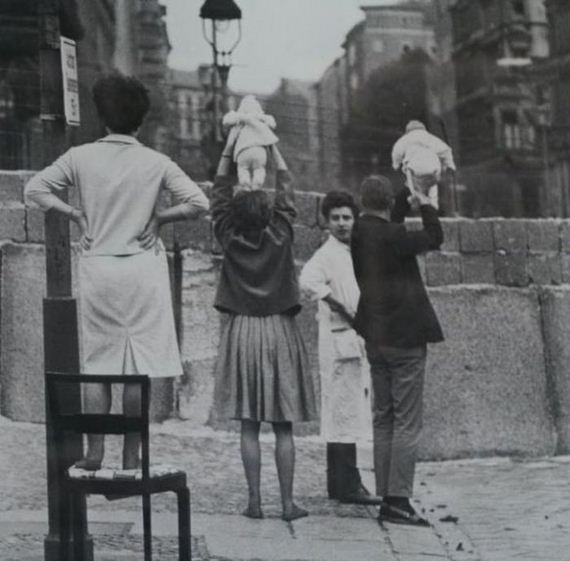 German soldier lighting his cigarette with a flamethrower, 1917. The flamethrower, which brought terror to French and British soldiers was used by the German army in the early phases of the First World War in 1914 and 1915 (and which was quickly adopted by both). The Flammenwerfers (flamethrowers) tended to be used in groups of six during battle, each machine worked by two men. They were used mostly to clear forward defenders during the start of a German attack, preceding their infantry colleagues. They were undeniably useful when used at short-range, but were of limited wider effectiveness, especially once the British and French had overcome their initial alarm at their use. The operators of Flammenwerfer equipment also lived a most dangerous existence. Quite aside from the worries of handling the device – it was entirely feasible that the cylinder carrying the fuel might unexpectedly explode – they were marked men; the British and French poured rifle-fire into the area of attack where Flammenwerfers were used, and their operators could expect no mercy should they be taken prisoner. Their life expectancy was therefore short. 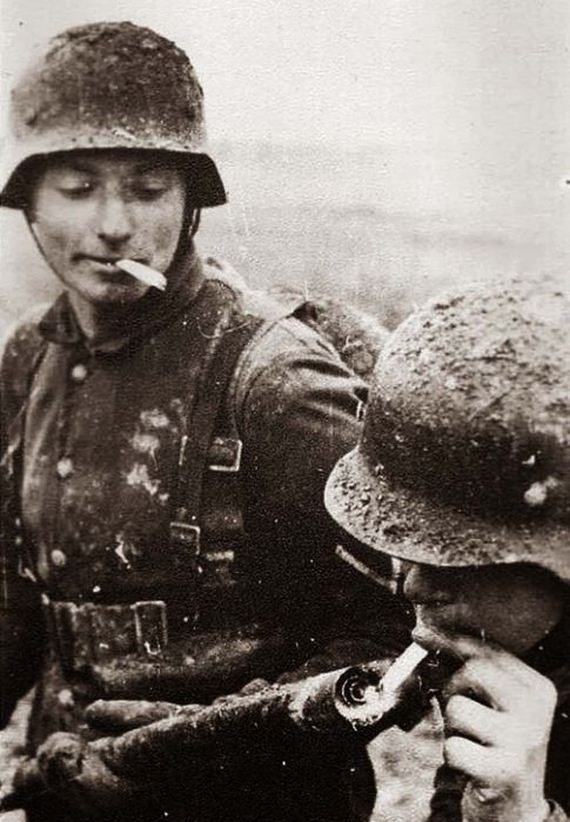