You can do a lot of things with duct tape, but a prom dress has never really occurred to many of us 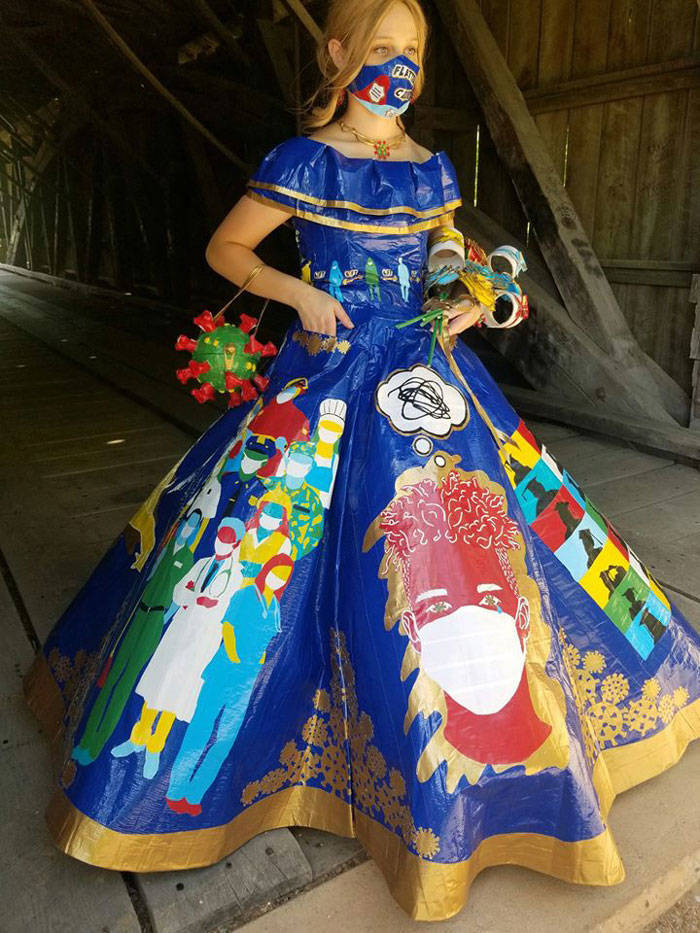 Peyton Manker is an 18-year-old senior student from Sparta, Illinois who decided to try her luck and entered the contest. Now, she enjoys drawing, reading, and hiking in her free time, but sewing and designing clothing is something new to her.

At first, she thought she’d be crafting a dress dedicated to Leonardo da Vinci, a favorite of hers. However, the pandemic struck and the prom and graduation festivities were canceled. So, it was time for plan B. She decided to make a COVID-19 themed dress. She had a hunch nobody else would, and it would be one that definitely stands out from the rest. So, she got cracking on the design.

“If you saw me crafting my dress, you’d usually see me sitting on the floor in athletic shorts, an old t-shirt and a very messy ponytail hunched over a cutting board and trying to cut tiny pieces of tape with a very tiny knife,” Peyton jokingly explained a typical day of crafting the dress. 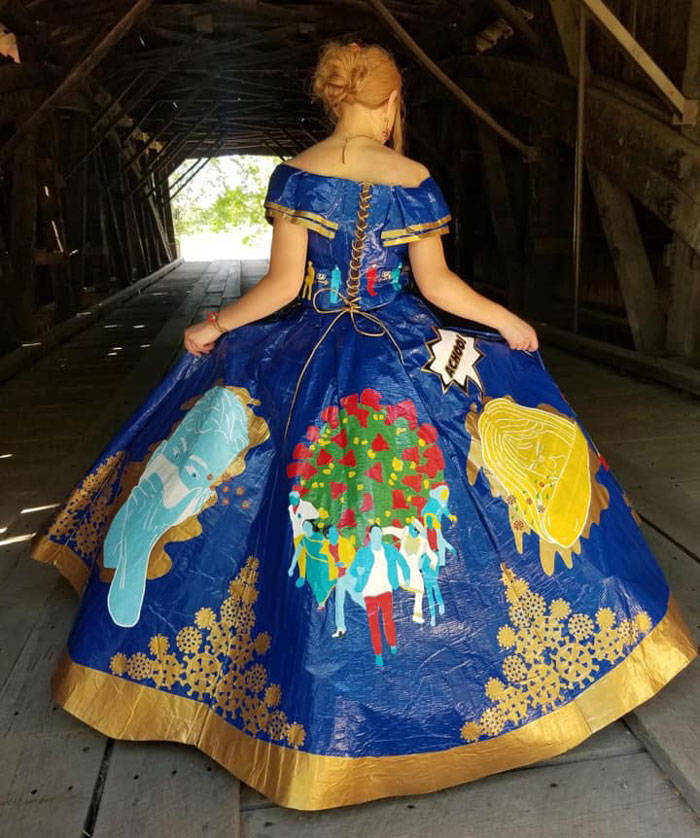 Peyton Manker, a senior student from Illinois, decided to take part in Duck Brand’s competition to create a prom dress (or a tuxedo) out of duct tape 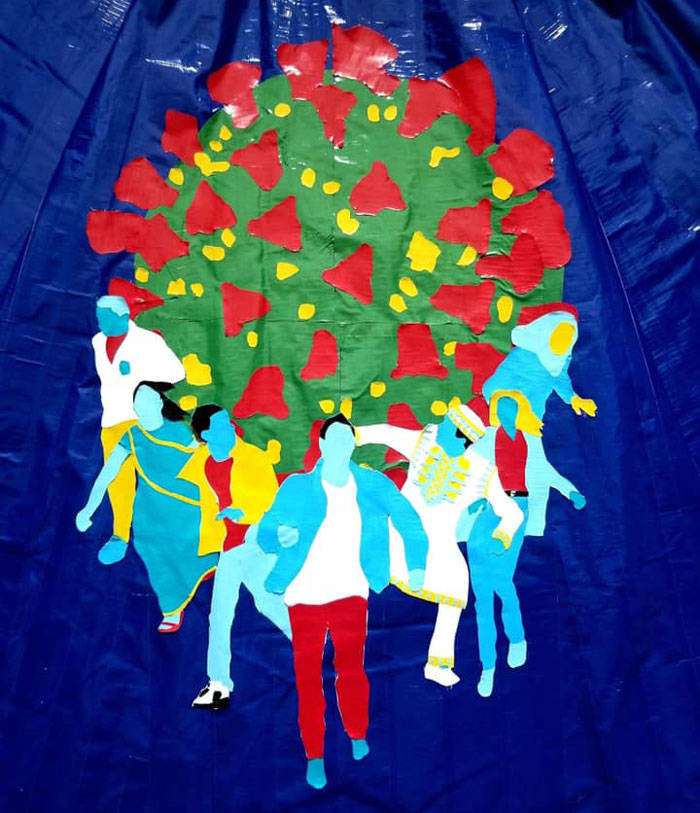 So, the COVID-themed duct tape prom dress features a number of details that reference all the things that happened during the lockdown. This includes imagery of zoom classes and online graduations, people in masks and those sneezing, people running away from the coronavirus, a call to flatten the curve, and also an image honoring essential and front-line workers.

Besides the predominantly blue and gold gown, Peyton also crafted a duct tape mask, a coronavirus shaped purse, and a number of smaller accessories like a hair clip and a wristband, all adorned with viral imagery.

Turns out, the dress took her nearly 400 hours to make, using up 41 rolls of duct tape. This translates to 16.6 straight days of designing and crafting and roughly 820 yards (or 750 meters) of duct tape. We’ve estimated the cost of the dress (duct tape-wise) varied between $150 and $245, depending on where you buy. 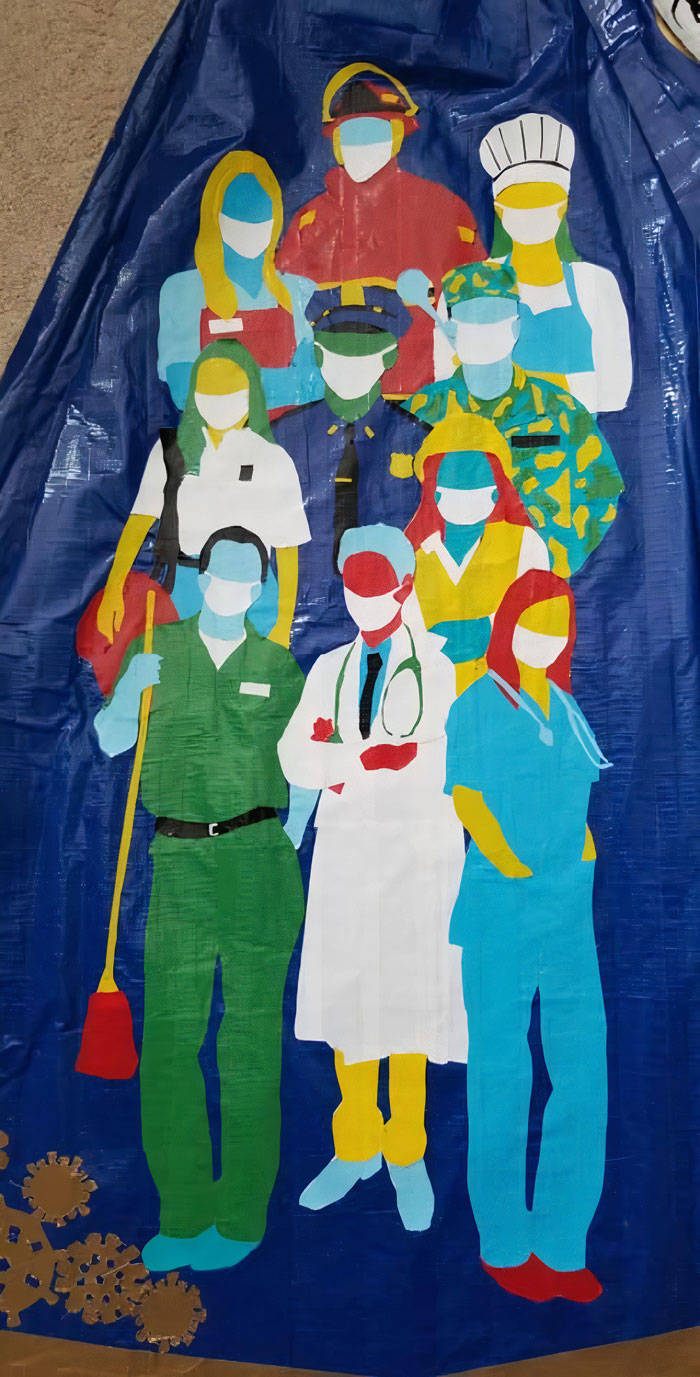 Manker also explained some of the images on her dress, saying that the virtual graduation was a tribute to her classmates and other seniors who did not have the privilege to attend a normal graduation. The image of essential workers is a tribute to those working on the front lines. The image of people running away from the virus signifies the world trying to escape it.

“The biggest challenge in crafting my dress was actually making the structure of the dress itself,” explained Peyton. “Like I mentioned before, I have never sewed or designed a piece of clothing, so, of course, I had no idea what I was doing! I went through a lot of trial and error making sure the dress fit, etc., but it finally came together!”

And the challenges didn’t really stop there. Despite how awesome it looks, the dress requires a certain degree of sacrifice when wearing it. Besides it being relatively heavy and stiff due to the weight and the different fabric of the tape, it is also extremely hot. Whilst Peyton was taking photos, she was constantly sweating and it was killing her ankles.

The competition promises a $10,000 scholarship to the first prize winner and various prizes for runners up 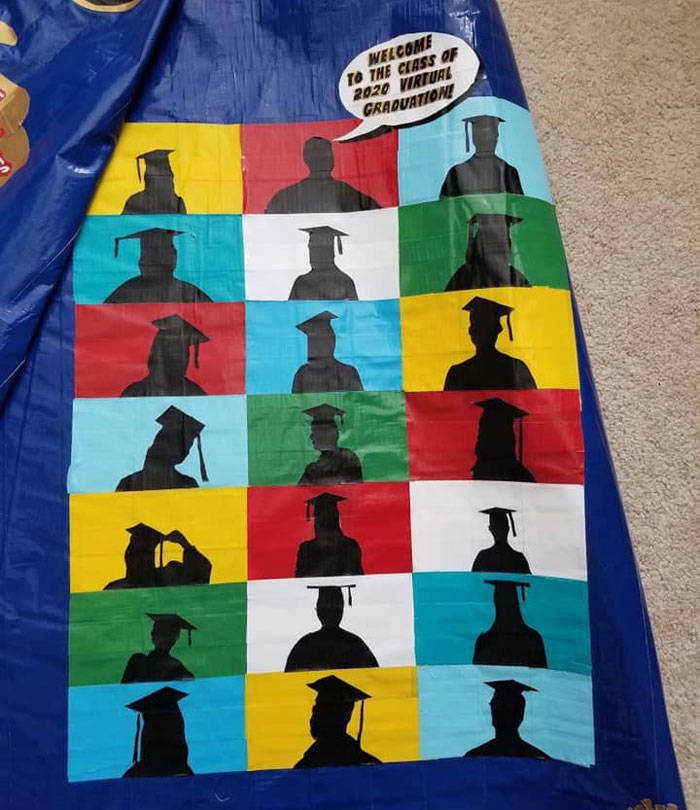 Nearly 400 hours and 41 rolls of duct tape later, Peyton came out with an impressive COVID-themed dress 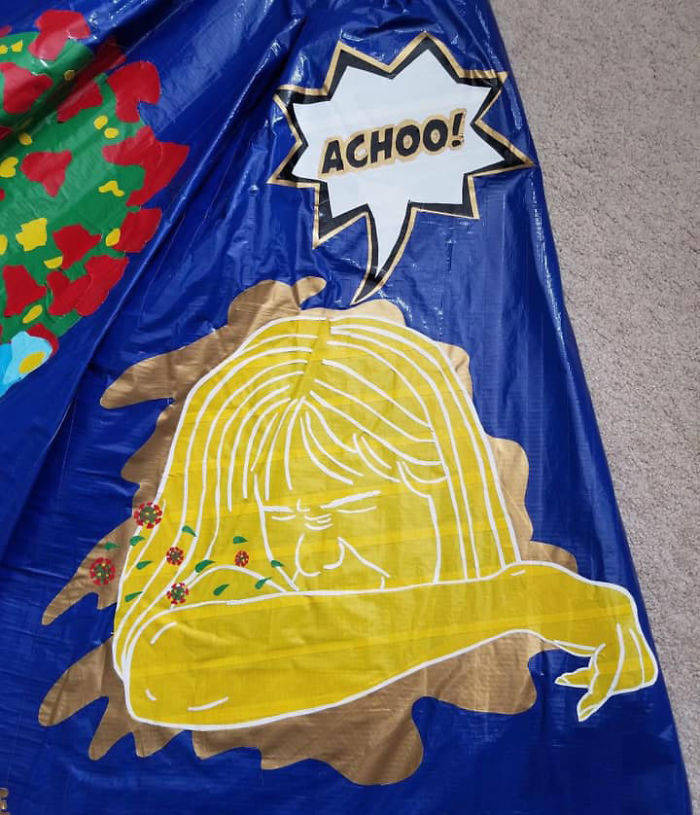 Peyton wanted the dress to represent the pandemic in a positive light: not as a piece of history, but rather as a representation that humanity got through it.

It wasn’t long until the dress went viral on the internet. Suzy, Peyton’s mother, shared some pictures of the dress on her Facebook, which reached people beyond just friends and family. The post garnered over 148,000 reactions with 50,000 comments and over 250,000 shares.

“I was extremely surprised to see my dress go viral. I didn’t know how to feel, it was surreal,” Peyton explained her reaciton. “I only expected my hometown to see my dress and that was it. But then I began receiving messages from people all over the world! It was an insane feeling that I can’t describe!” 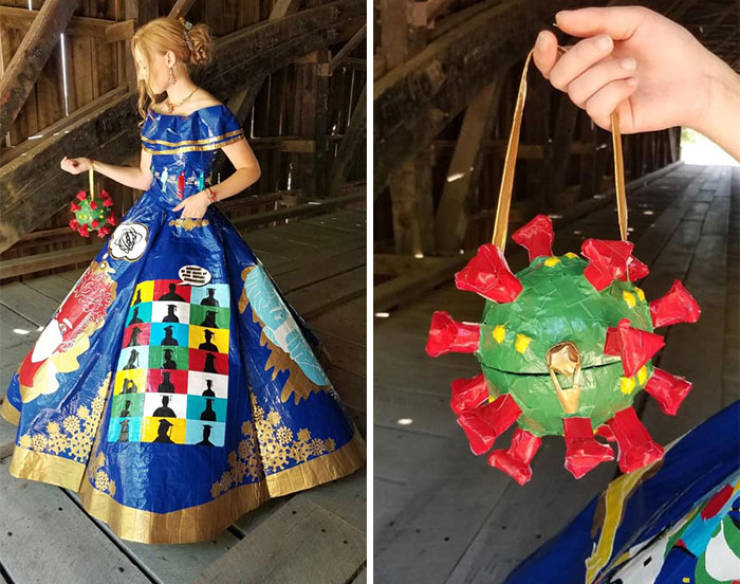 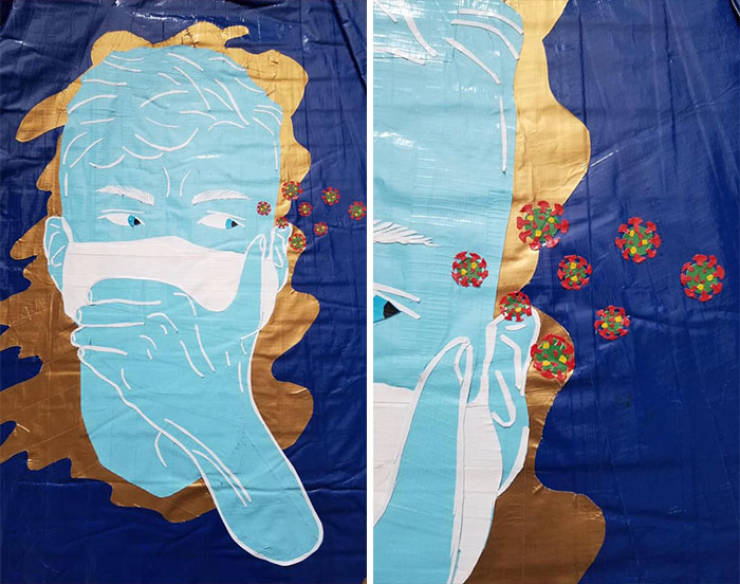 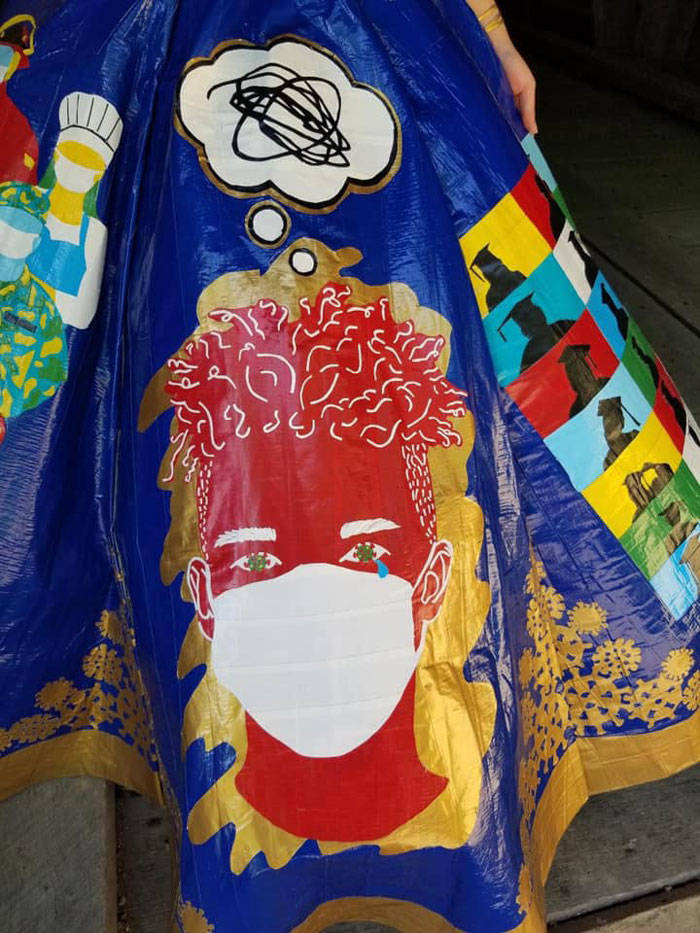 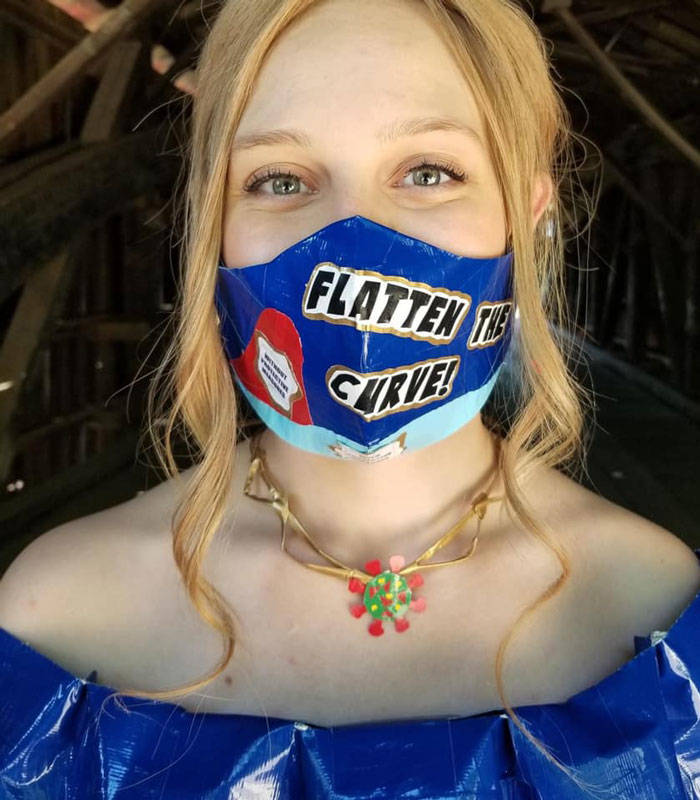 The dress as well as its accessories feature COVID-related imagery like masks, the virus, essential workers, and zoom graduations, to name a few 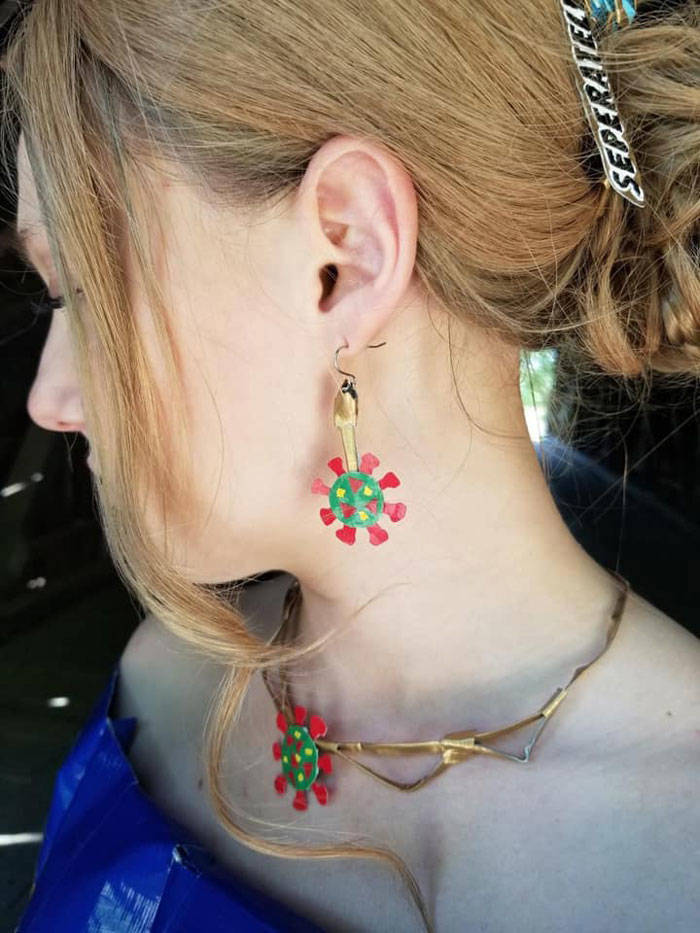 Lastly, we’ve asked Peyton if she’s planning on making other dresses or whether her dress going viral is an indication for her to start making a career out of it. She had this to say:

“I haven’t planned on making any other dresses, but we’ll see what the future holds! I am not sure if this is a calling for me to design dresses or craft but, I have always loved art, so I believe it may be in my future!” 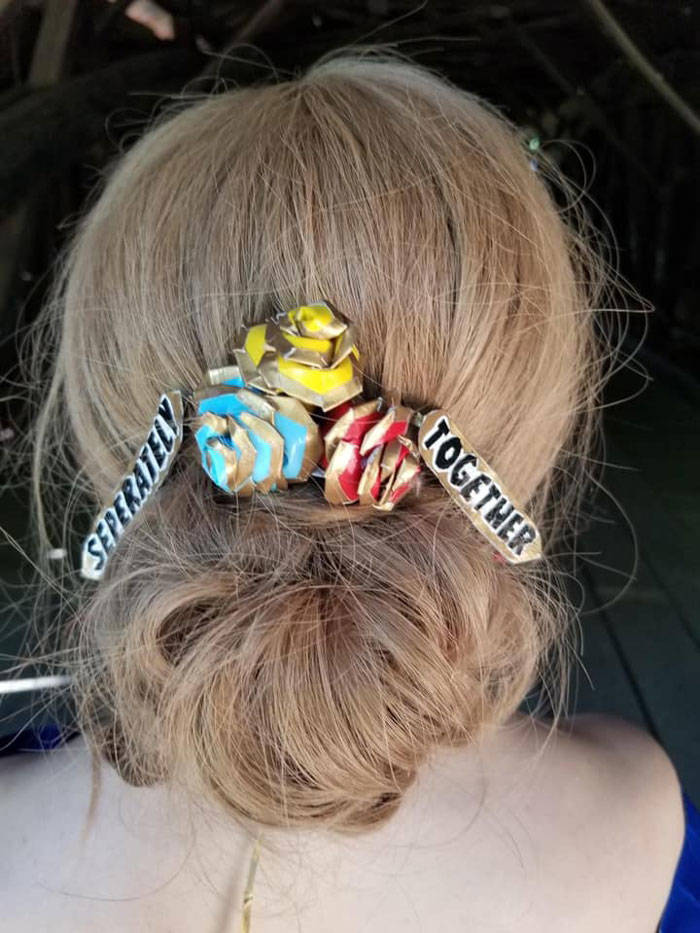 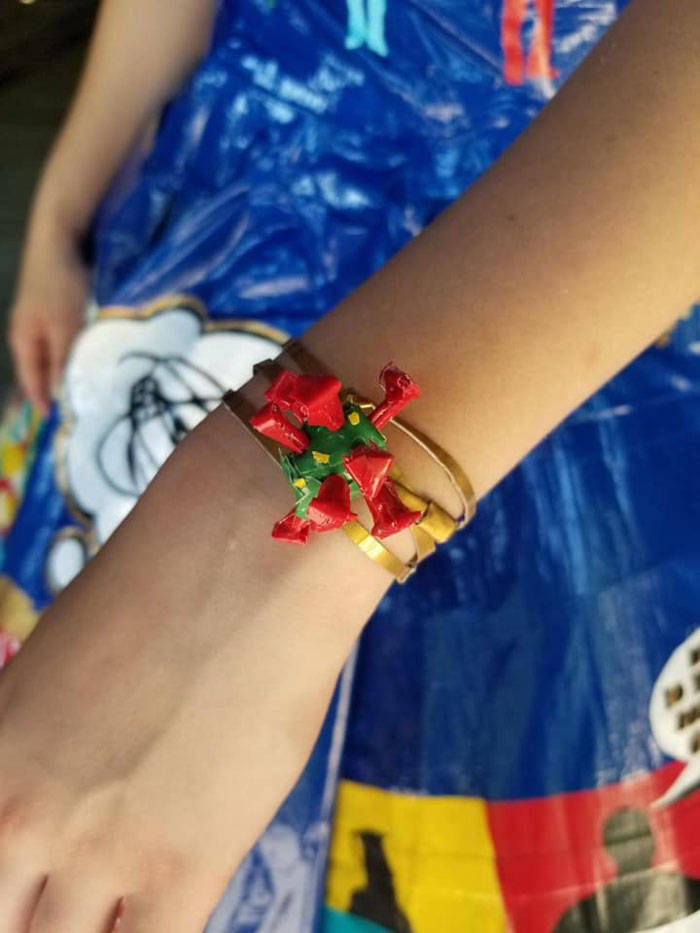 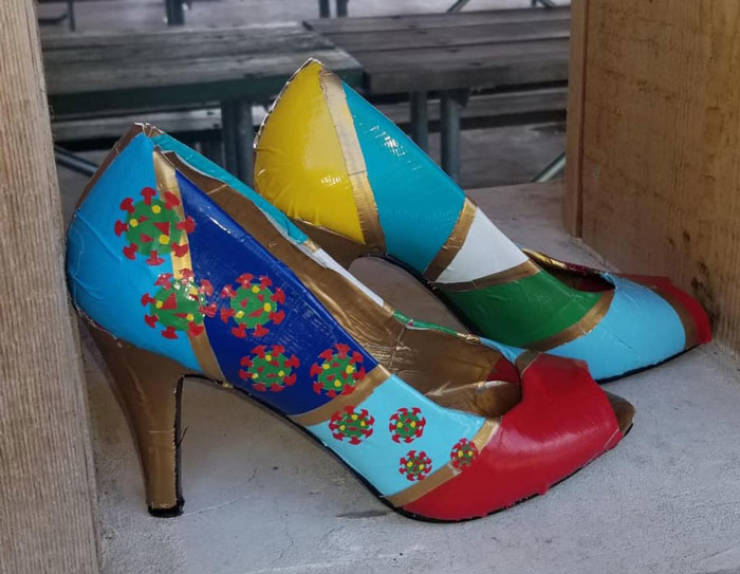 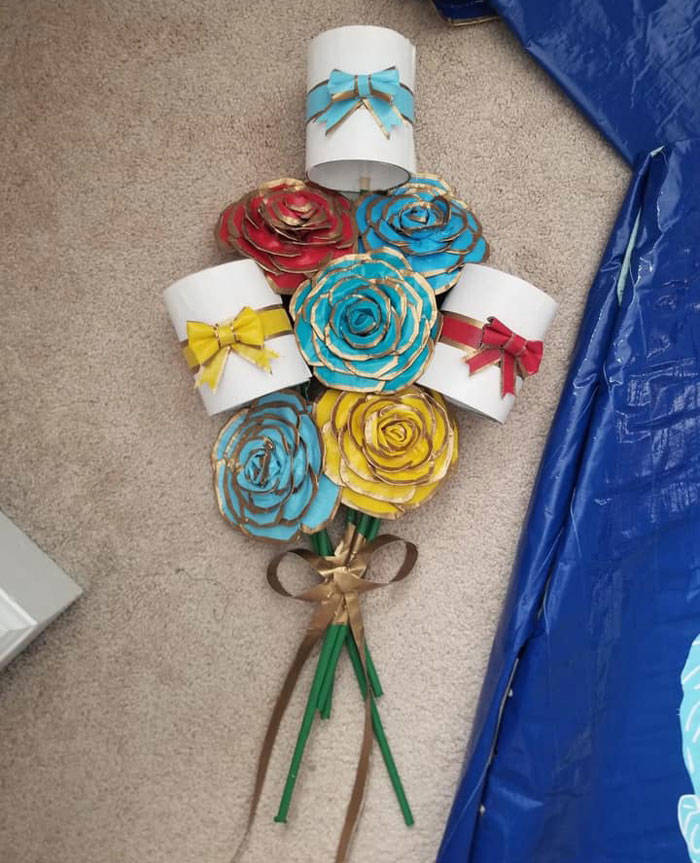 The community will be able to vote on the duct tape dresses and tuxedos between June 29th and July 10th with the final winners being announced on July 21st. There’s even a Facebook page dedicated to Peyton’s prom dress with over 16,000 followers, which you can support as well.

As of the moment of our interview with Peyton, she was also notified that she has been selected as one of the finalists in the contest, so a huge congratulations to Peyton! Be sure to cast your vote on the Stuck At Prom Website starting June 29th.

You can also check out some of the process of making the dress on Peyton’s Instagram page. 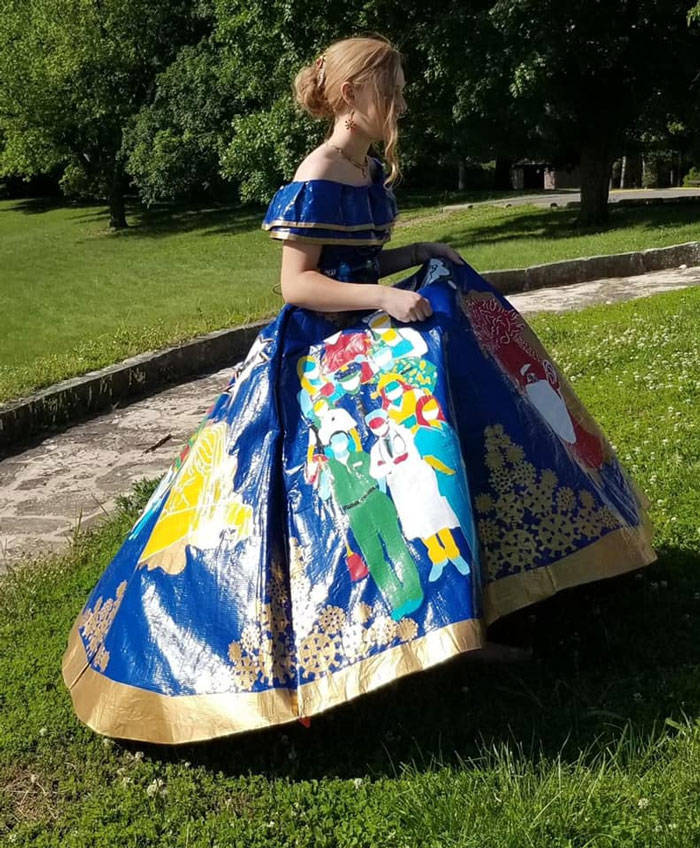