Interesting Facts You Probably Didn’t Know About The Octopus

The octopus is one of the most unique and creepy looking creatures in the ocean. Today you’re going to learn some fun facts about this unique sea dweller and you’ll never forget them.

The octopus is the smartest of all of the invertebrates on Earth, which make up 95% of ALL of the animals. It has around 300 million neurons throughout its body. 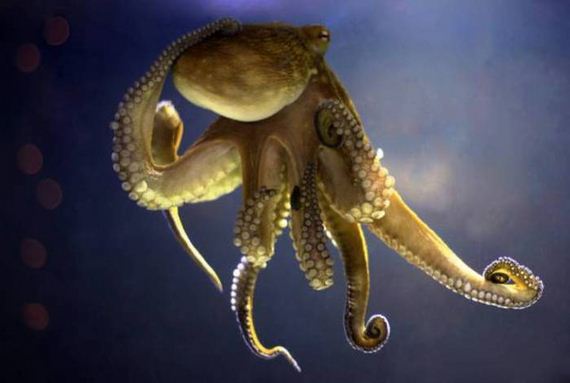 They spend most of their lives swimming alone, even when it comes time to mate.

They want to be alone so badly that the male octopus will steer clear from a female mate. Instead of getting near her, he will send a package of his sperm to her from a distance, which she will store for later. 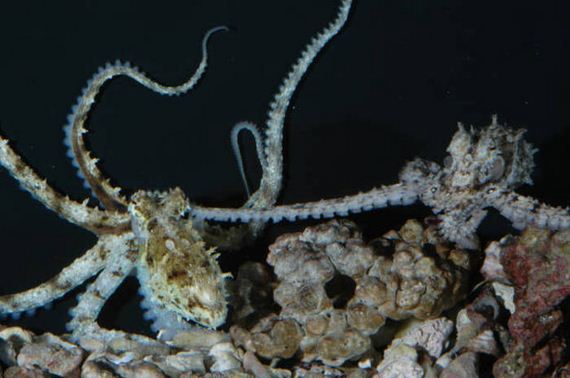 To make up for the lack of connection, sometimes the male will sever one of his eight arms and send it along with the package. 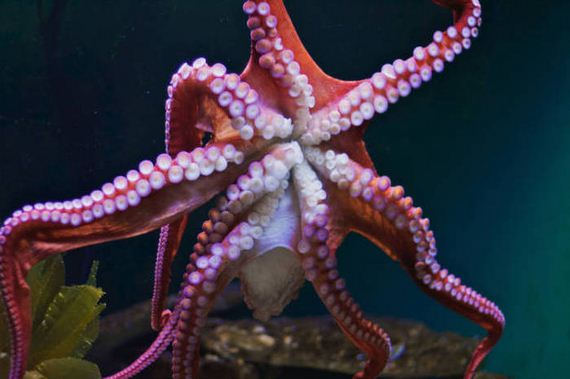 Lucky for those that partake in the severing tradition, octopuses can regrow lost limbs. They can even close off the severed artery to reduce blood loss. 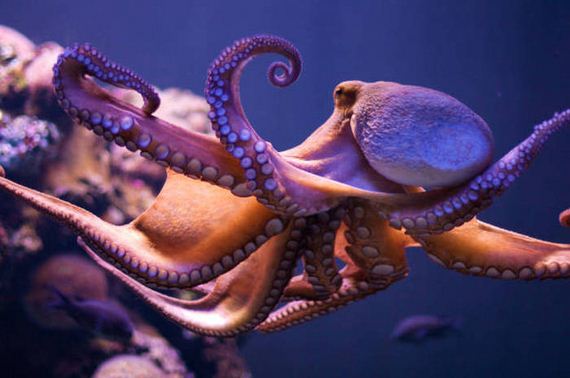 Since their blood is so high in copper, it is blue, not red. 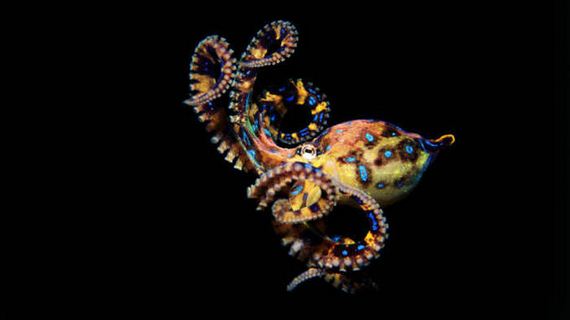 Another time they sever their arm is when they’re trying to distract a predator long enough to jet away at top speeds, which can get up to 25 mph.

An octopus’s brain resides in its egg-shaped head, but each arm also has enough neurons to operate semi-independently. 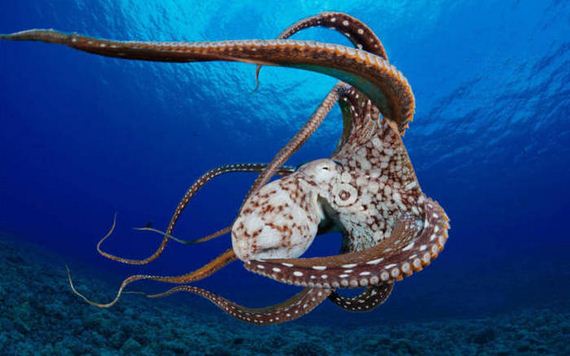 That means each sucker on the arm can extend, release and pinch when it damn well pleases. That also means that the severed arms that they’re so fond of can function for a short time after being detached from the body. 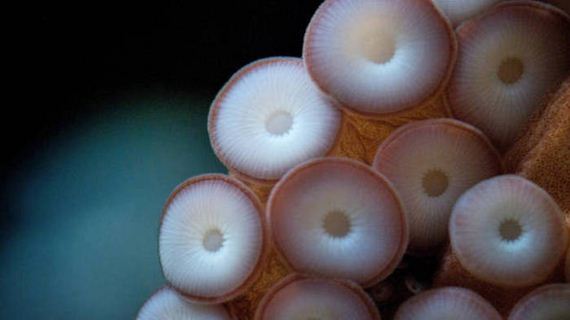 Octopus is actually highly nutritious: A 3-ounce serving has 139 calories, 2 grams of fat, 25 grams of protein, 45% of your daily iron value, and 510% of your daily B12 value. Basically, it kicks chicken’s ass. 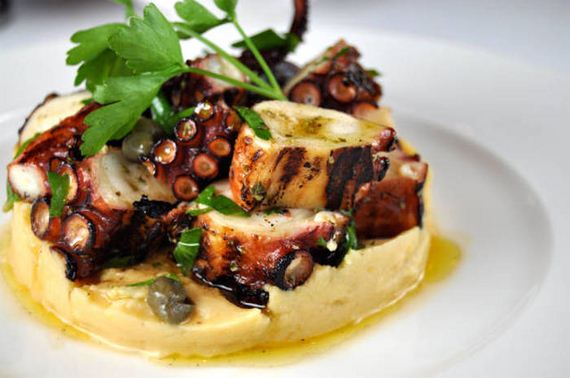 Octopuses have 3 hearts. The main heart actually stops beating when the animal is swimming, so it tires out quickly. 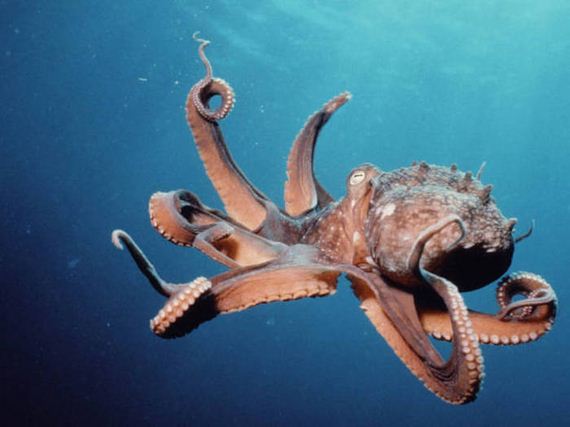 Although they don’t like to be in contact with each other, they’re still no strangers to romance. In a 1970s experiment, a male octopus’s main heart actually skipped a few beats when a potential female mate was introduced into its tank. 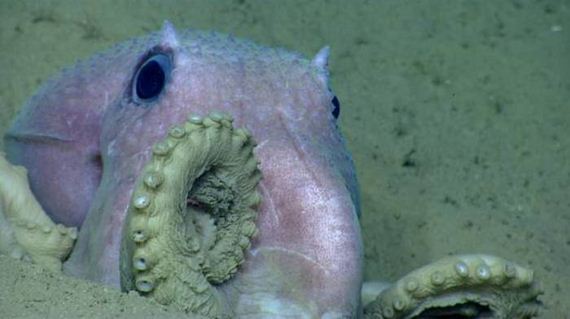 Because swimming is so tiring, an octopus’s favorite way to maneuver about is “walking” along the seafloor. They use their back 4 arms for walking and the front 4 to find food. 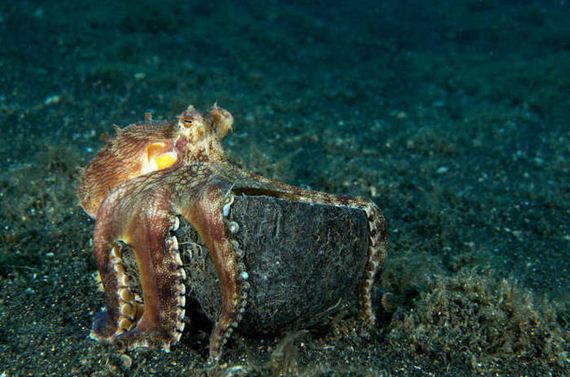 However, walking is slow and predators are fast. To solve this problem, some octopuses carry protection. Here you see an octopus carrying two coconut halves so it can hide inside if need be. 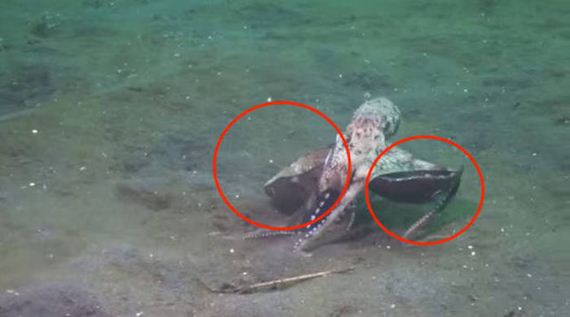 Still, their most impressive survival tactic is their skin. They can change the color and texture of their skin to blend in with their surroundings.

They can complete a full-body transformation in just three-tenths of a second using the 3 different color-changing sacs in their skin: chromatophores, iridophores and leucophores. Most other animals that can change colors only have chromatophores.

The octopuses activate different colors by flexing and relaxing the muscles beneath their skin.One scientist documented an octopus changing colors 177 times in an hour. 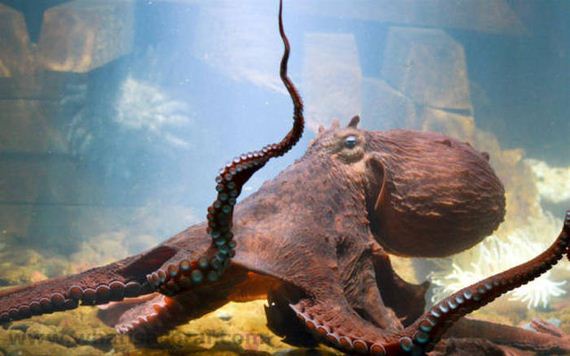 Scientists aren’t even sure they’re aware of what their skin is doing, however, because they’re colorblind. 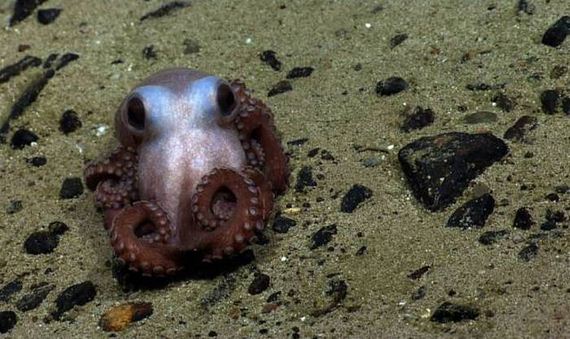 The skin-changing abilities also make them invisible to prey, which makes them skilled hunters. One lethal bite sends a neurotoxin into their victims body. Most of these toxins aren’t strong enough to kill a human, except for the toxin of the blue-ringed octopus. Although tiny, it contains enough venom to kill 26 adults within minutes. 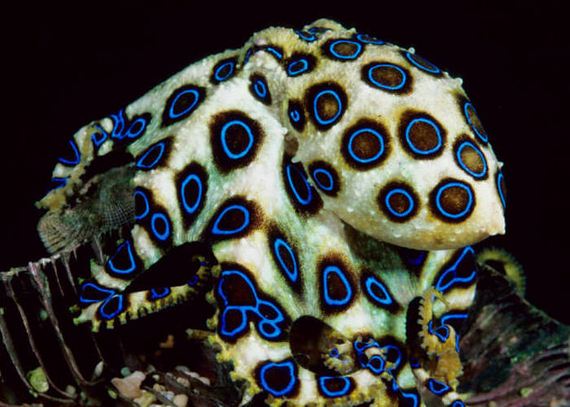 Some of the things found in the stomachs of captured octopuses are mind-blowing: clams, crabs, lobsters, and even seagulls.

They even venture onto land to find food. Their strong arms can pry open virtually any mollusk shell they find. 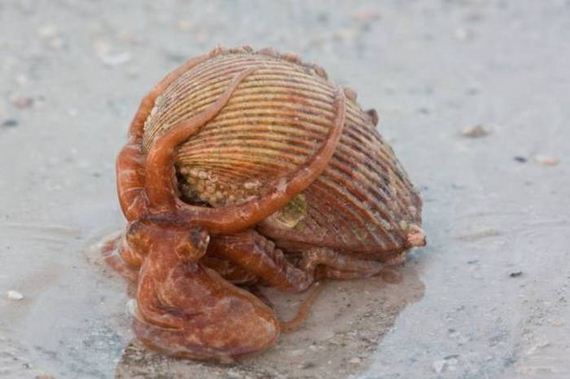 The average octopus has 240 suckers per arm, adding up to 1,920 suckers total. And guess what? each one is strong enough to hold 35 pounds. 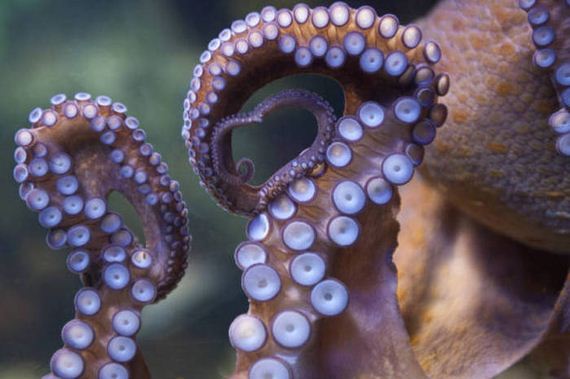 Those strong suckers even have chemoreceptors, which can “taste” their food. Just imagine being able to taste a slice of pizza the second you touch it with your fingers. 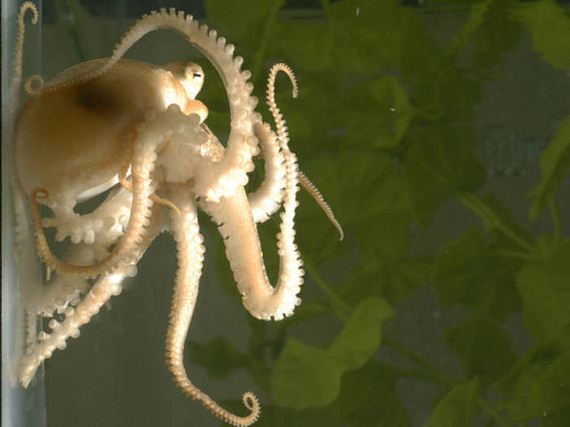 Scientists have tested octopuses’ intelligence by placing food in jars with screwed caps. The eight-armed creatures unscrewed the jars with ease to get what’s inside. One scientist even discovered an octopus that could dismantle a childproof cap.

Most octopuses can squeeze themselves through any hole that is as large as their mouth, which is the only non-squishy thing on their body. 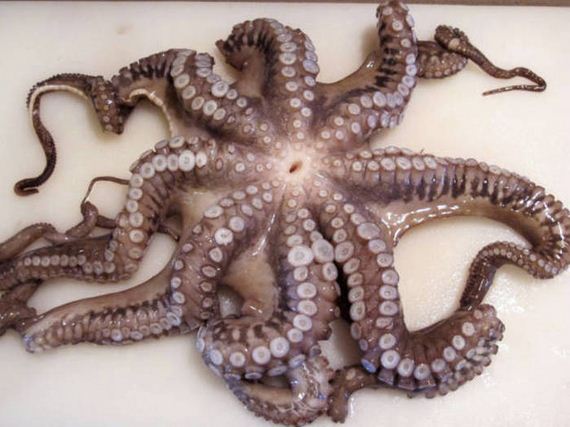 They live in small dens such as natural rock outcroppings or small corners in sunken ships, and this is what inspired the Beatles song “Octopus’s Garden.” When in captivity, octopuses will get extremely bored and stressed if left unstimulated. Scientists found in one study that octopuses who spent time in bare tanks began eating their own arms from stress, but stopped when placed in tanks with hiding spots and cool knickknacks. 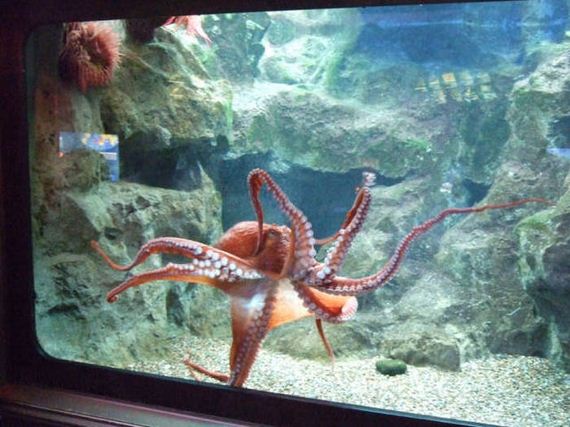 They can even distinguish one human from another. The most convincing evidence comes from stories: A watchman at the Seattle aquarium would always shine her flashlight into some of the darkened exhibits, and the giant Pacific octopus living in one of them didn’t like it. So, every time that particular guard walked by, the octopus would squirt water on only that guard to show her that it was annoyed. 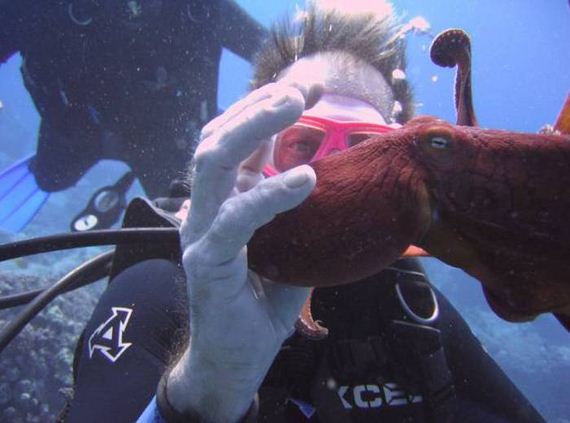 Perhaps the craziest and most impressive quality of the octopus is that it can actually edit its own genes. they can alter their genetic code by editing their RNA to become more tolerant of cold temperatures, and they can improve their eyesight to see in the dark. Scientists are studying this behavior to potentially learn how to replicate this in humans as a possible cure for disease. 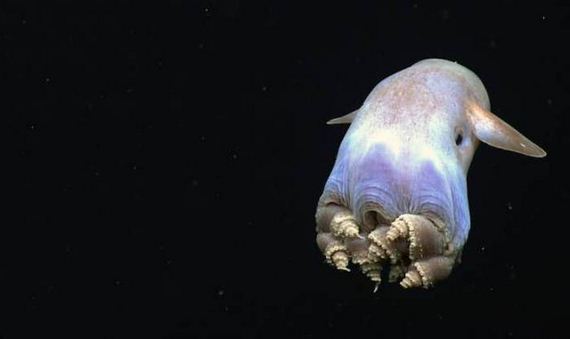 Previous What Causes People To Become Addicted To Alcohol
Next Funny Pictures Vol.1109