Listen, we all gotta kick the bucket at one point or another, and usually obituaries drone on about the wonderful legacy somebody left behind or how inspiring a person they were. But let’s face it, it’s more often than not boring & sentimental exposition made to skip all over the person’s flaws and spotlight only their most admirable qualities so we can all feel warm and cozy about things. Touching though that may be, where is the fun in that? Well, the family of recently deceased Irish-American man, Chris Connors, from Maine, clearly understood that laughter is the spice of life when they wrote his obituary. 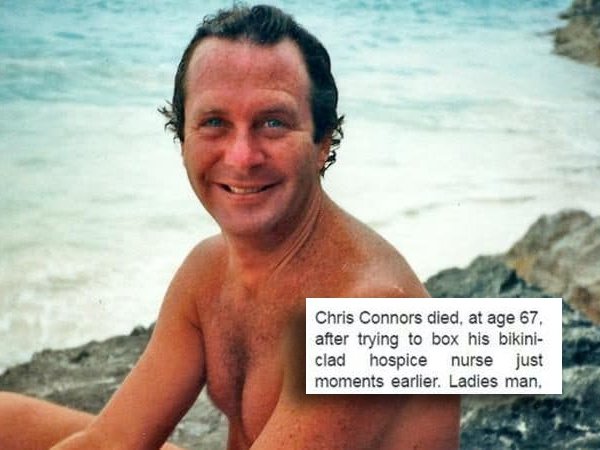 Chris passed away a week ago at the age of 67, from a combination of ALS and pancreatic cancer. However, before his death he requested that his daughter, Caitlin, and her cousin, Liz, write his obituary to be as funny as possible. “I just want you to make it funny,” were his instructions, according to his now widow. “I don’t want a run-of-the-mill obituary. So we had champagne and we had an obituary-writing party.” And the ensuing obituary, with the headline “Irishman dies from stubbornness, whiskey,” has become a runaway hit shared around the globe.

The obituary begins “Chris Connors died, at age 67, after trying to box his bikini-clad hospice nurse just moments earlier.” It goes on to describe him as a “ladies’ man, game slayer, and outlaw.”

“He was the type of man that people would drive 16 hours at the drop of a dime to come see. He lived 1000 years in the 67 calendar years we had with him because he attacked life; he grabbed it by the lapels, kissed it, and swung it back onto the dance floor.”
Perhaps his biggest regret in life, according to the girls, “Eating a rotisserie hot dog from an unmemorable convenience store in the summer of 1986.”

“Most people thought he was crazy for swimming in the ocean in January,” the girls continued, “for being a skinny Irish Golden Gloves boxer from Quincy, Massachusetts; for dressing up as a priest and then proceeding to get into a fight at a Jewish deli.” Other fun details include “Absolut vodka and Simply Orange companies are devastated by the loss of Connors”. “As much as people knew hanging out with him would end in a night in jail or a killer screwdriver hangover, he was the type of man that people would drive 16 hours at the drop of a dime to come see.”

Stories ran wild about grand parties he once threw, that had his neighbors calling the cops to complain about the noise, especially when Chris would fill the canons on his cliffside property with fireworks unleashing an unholy cacophony of sounds. However, the cops never did anything about it because “the police chief was his best friend and all the firemen were at the party,” Caitlin said. 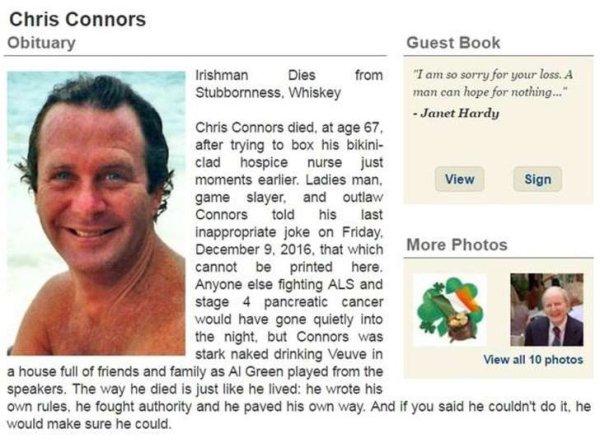 The obituary ended simply by stating: “The way he died is just like he lived: he wrote his own rules, he fought authority and he paved his own way. And if you said he couldn’t do it, he would make sure he could.” Emily Connors, his widow told reporters, “He would’ve loved it,” she continued, “He would’ve laughed. He’s definitely looking down at us.”

Isn’t that so much more fruitful an obituary than what we normally come to expect? I think the man who lived such a wild and mischievous life, is still one-upping himself in death, and maybe we should all take a page from his book.