Is It Historical Doppelgangers Or Are These Celebrities Immortal?

Nicolas Cage famously looks like this Confederate prisoner of war. 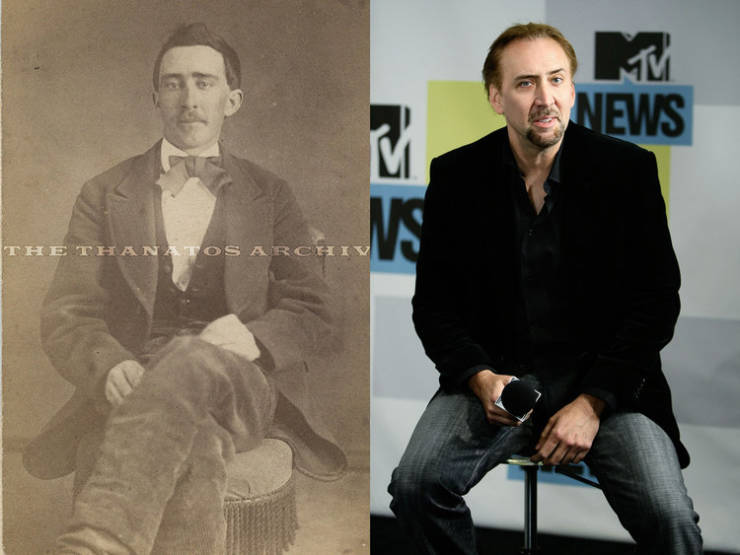 The meme of celebrity immortality may have begun in 2011, when a Seattle-based man tried to sell a photo of Lt. Robert M. Smith, a Confederate prisoner of war photographer, who looks exactly like Nicolas Cage.

The title of the eBay listing was “Nicolas Cage is a Vampire.”

“Personally, I believe it’s him and that he is some sort of walking undead / vampire, et cetera, who quickens / reinvents himself once every 75 years or so,” the listing said, according to The Hollywood Reporter. “150 years from now, he might be a politician, the leader of a cult, or a talk show host.”

Shortly after it went online, the listing disappeared without a trace.

Cage may have dropped hints about his life as an immortal vampire in his movies. He played a man convinced he was a vampire in the 1988 cult movie “Vampire’s Kiss,” and he played a 3,000-year-old wizard named Balthazar in “The Magician’s Apprentice,” from 2010.

A few months after the photo appeared, Cage went on David Letterman’s talk show to deny that he was an immortal vampire.

“Now look, I don’t drink blood and the last time I looked in the mirror I had a reflection,” Cage said.

Cage is allegedly in a centuries-long battle with John Travolta. 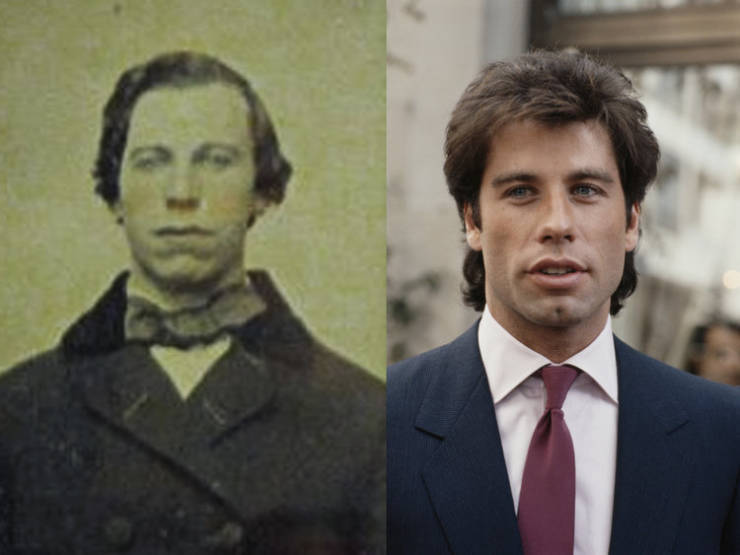 Shortly after the Cage eBay affair, a similar listing went up on the site for a 150-year-old photo of a man who looked a lot like John Travolta. They have similar-looking eyes, hairline, facial structure, and penchant for longish sideburns.

As the AV Club noted, both Cage and Travolta starred in the 1997 movie “Face/Off,” where they played characters who tried to kill each other and who swapped faces. Perhaps it may have been a metaphor for their frustrations with immortality, and the sameness of existence when you’ve lived a long life.

Keanu Reeves looks a lot like an actor from 150 years ago. 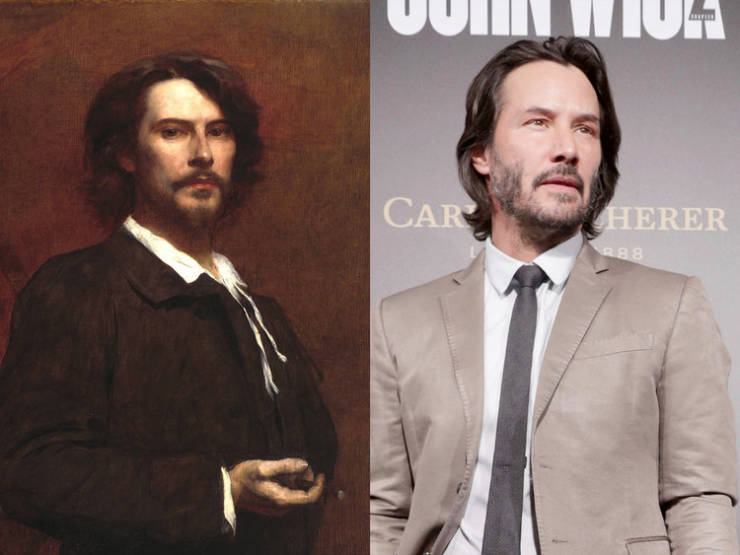 Keanu Reeves is 52, but he basically hasn’t looked any different since his 20s. He also bears a striking resemblance to the 19th century French actor Paul Mounet, which has led some people to theorize that they’re one and the same. 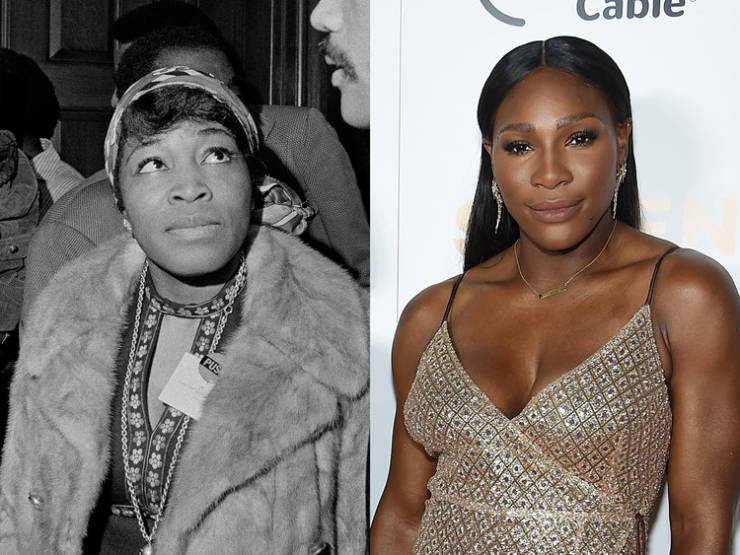 The tennis champion looks like Shabazz, the former wife of Malcolm X, educator, and a fiery civil rights advocate in her own right.

From the strong jaw to the high cheekbones, Williams would be perfectly cast in any historical drama about Shabazz.

Did Jack Black coordinate American militia forces before the outbreak of the Revolutionary War? 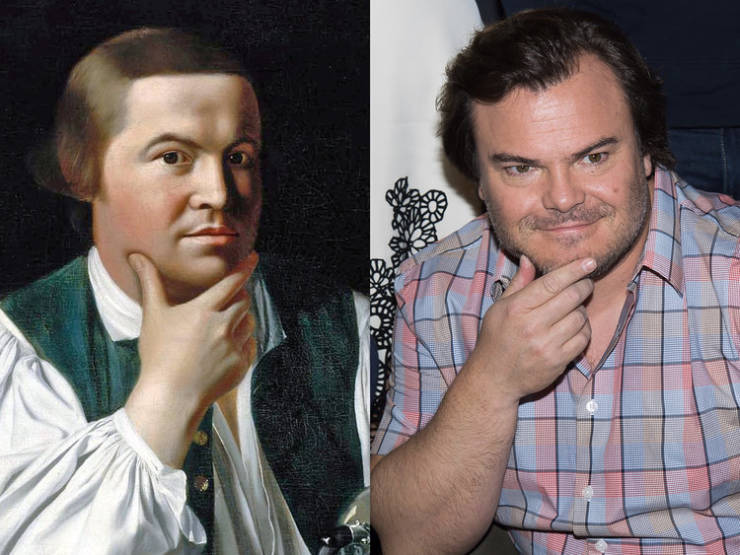 Black – the comedic actor and voice of a panda who knows kung-fu in the “Kung Fu Panda” cinematic trilogy — bears a striking resemblance to Paul Revere.

Revere lived during the time of the Revolutionary War, so we don’t have any photos of him. The most famous portrait is John Singleton Copley’s painting of him from 1768, working as a silversmith in Boston. Jack Black also maintains an interest in metals: his hobby is collecting old coins.

Danny Pudi resembles some guy in a Berlin Wall documentary from 1962. 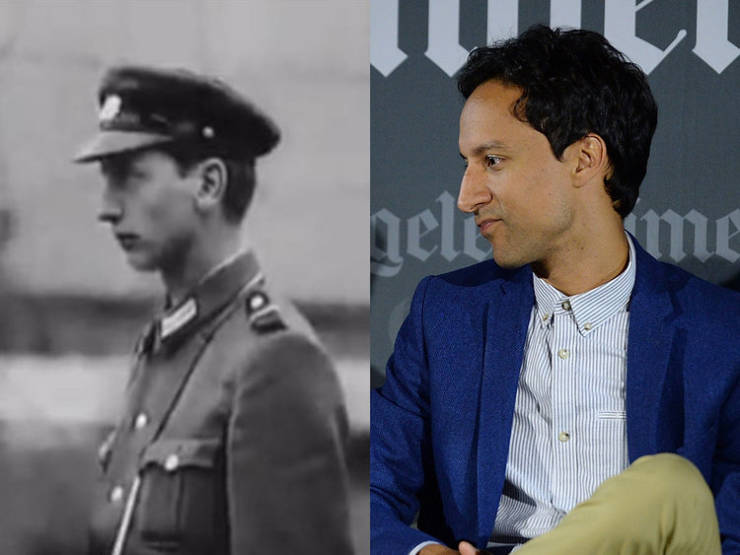 The “Community” actor’s mother noticed the resemblance, and Pudi agrees.

Oscar Isaac looks suspiciously like one of Raphael’s friends. 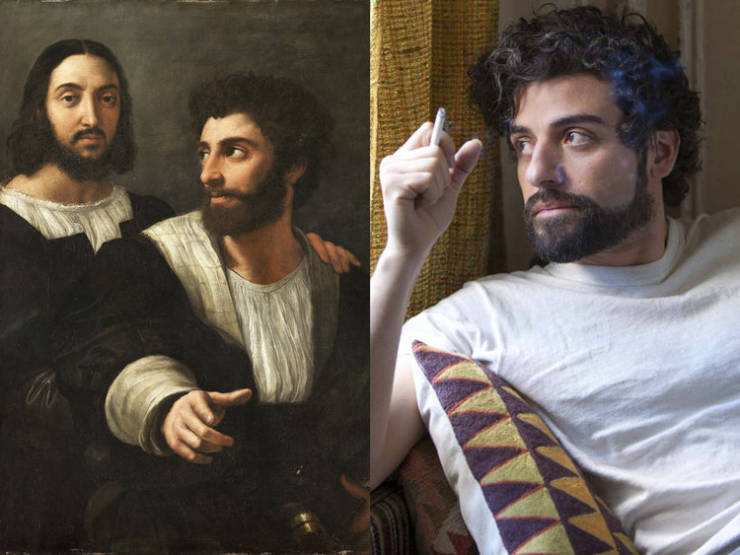 Somewhere between 1518 and 1520, the Italian Renaissance artist Raphael painted “Self-Portrait with a Friend.” The name of his friend isn’t entirely certain — some historians argue it’s one of his close pupils, others say that it was one of his contemporary artists. I submit to you the real name of this mysterious figure: Oscar Isaac.

Did Andrew Garfield engineer the Soviet takeover during the October Revolution and found a Marxist school of thought? 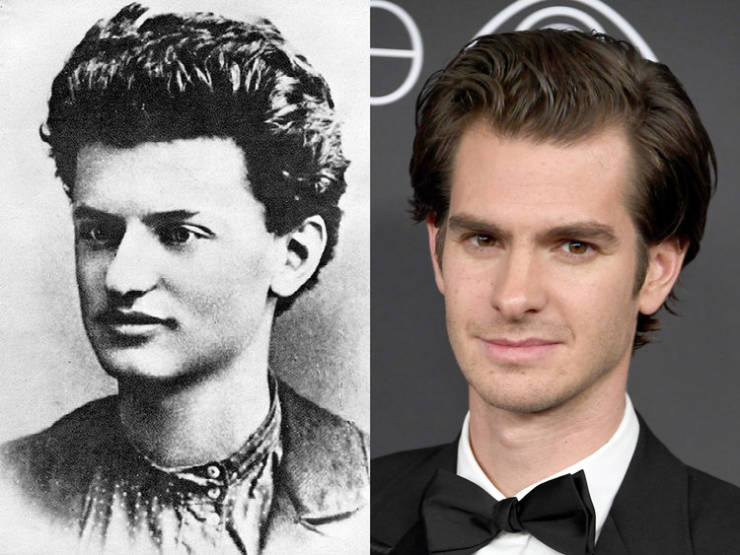 Andrew Garfield sure looks a lot like Leon Trotsky, down to the eyebrows and the swooped-up hair. But, mysteriously, his ancestry isn’t traced back to Russia.

Brad Pitt resembles the guy who made Rorschach inkblots. 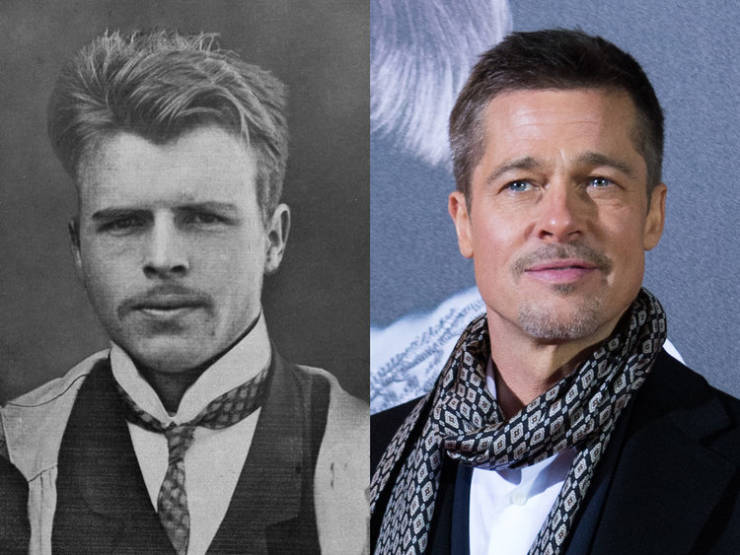 The actor looks like Hermann Rorschach, the 19th-century Swiss psychologist who developed the Rorschach test. They even have the same taste in neckwear.

Just how long as Jay Z been in Brooklyn? 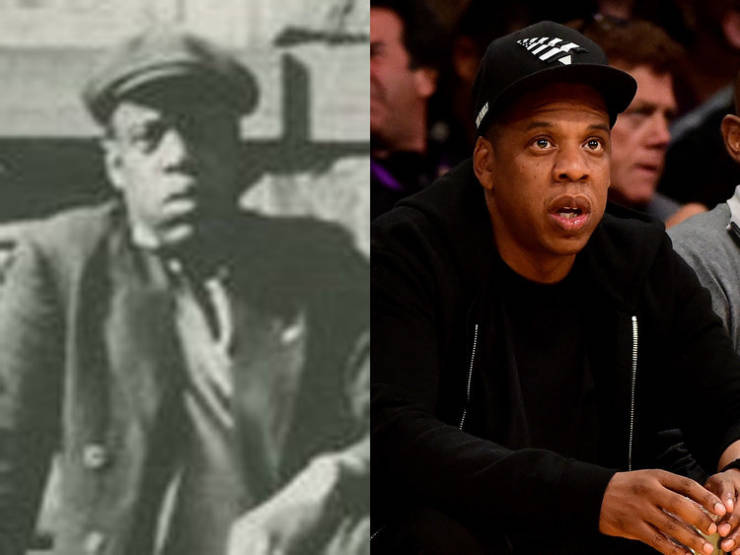 When The New York Public Library’s Schomburg Center for Research In Black Culture posted the photo “Harlem Loiters,” by Sid Grossman, on their Facebook page, it created a firestorm in the comments section. Followers noticed that the unidentified man in the center looked a lot like Jay Z.

The whole event got a whole write up in The New York Times. Meanwhile, Wikipedia continues to insist that Jay Z was born in 1969.

Dan Radcliffe looks like a lot of stern-looking old ladies. 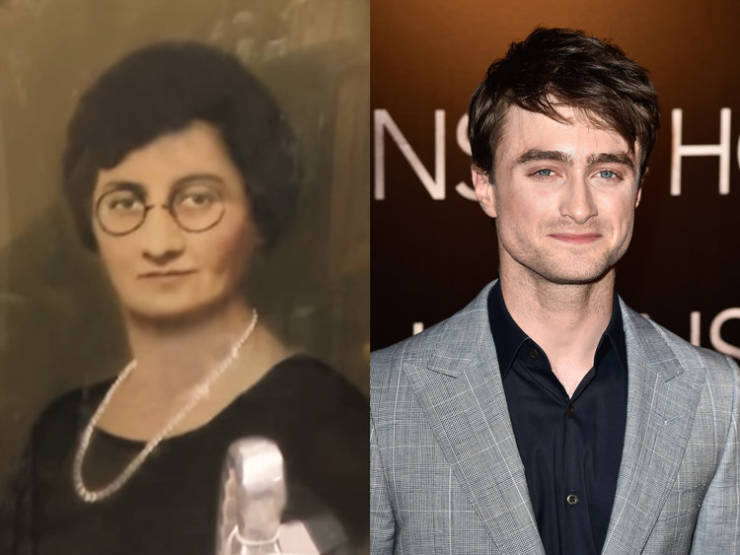 Racliffe looks like several people in old photos. When he visited the set of Jimmy Fallon’s late-night show in 2016, Fallon pulled the photos up and had Radcliffe react to — and reenact — some of the figures in the pictures.

Our favorite is the above picture of a severe woman wearing black, pearls, and what looks to be “Harry Potter” glasses. 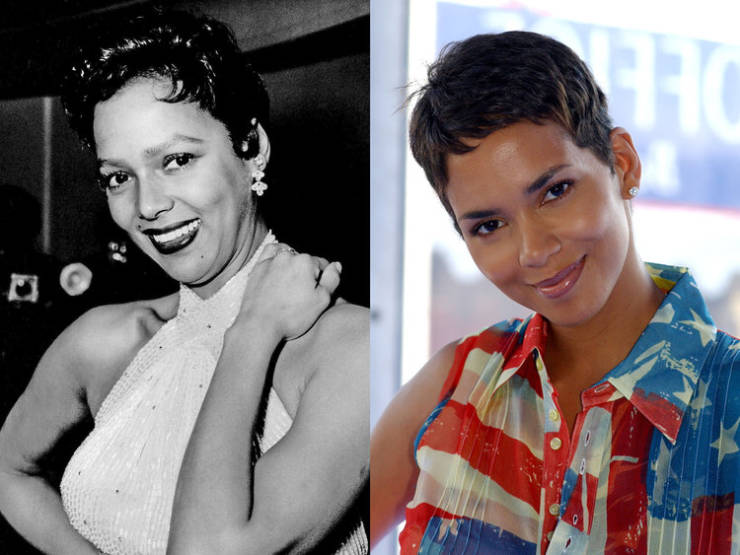 Berry made history in 2002 when she became the first black actress to win the Academy Award for Best Actress for her performance in “Monster’s Ball.”

Almost half a century earlier, Dorothy Dandridge became the first black actress to be nominated in that category for her performance in “Carmen Jones.” Both women happened to prefer the same haircut style during their Oscar moments.

Bruce Willis may or may not have been the Supreme Commander for the Allied Powers. 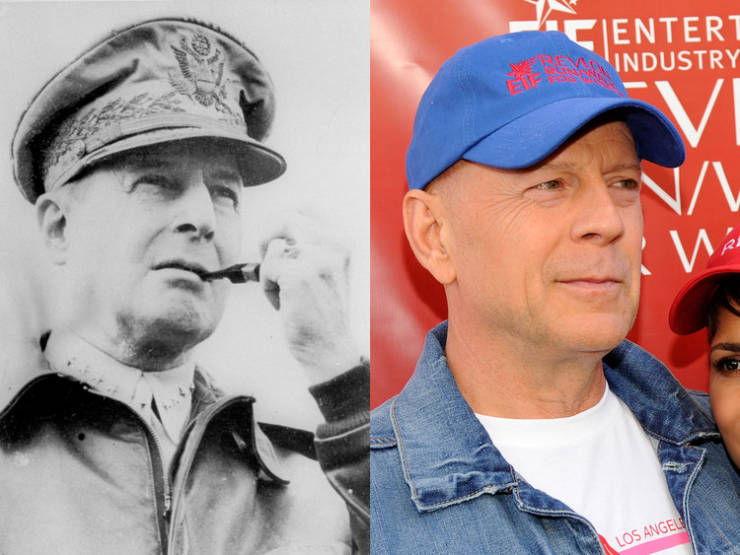 He’s the spitting image of Douglas MacArthur, the five-star general who led the United States and its allies in World War II.

If MacArthur ever gets another biopic, movie studios know who to cast.

Conan O’Brien may have been making jokes since the Civil War. 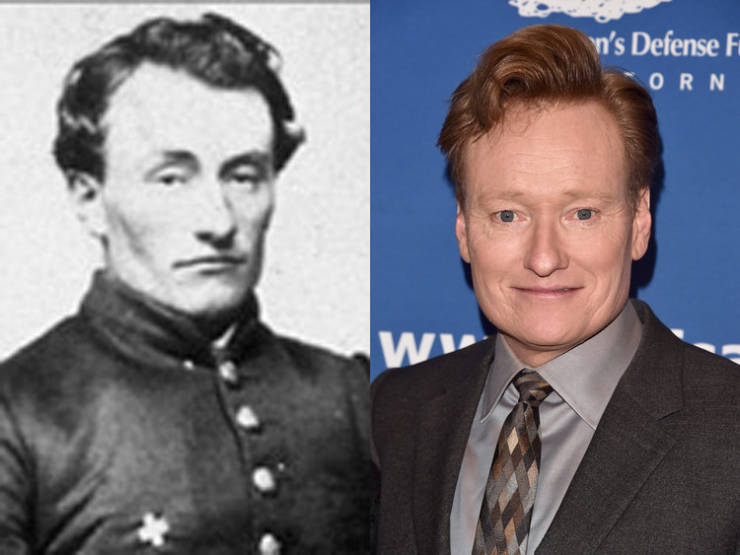 He looks like Marshall Harvey Twitchell, a Union soldier, carpetbagger, and Louisiana politician during the American Civil War and Reconstruction.

Sometime in the later decades, he must have moved to Massachusetts, where O’Brien was allegedly born.

Just when exactly did “Game of Thrones” take place? 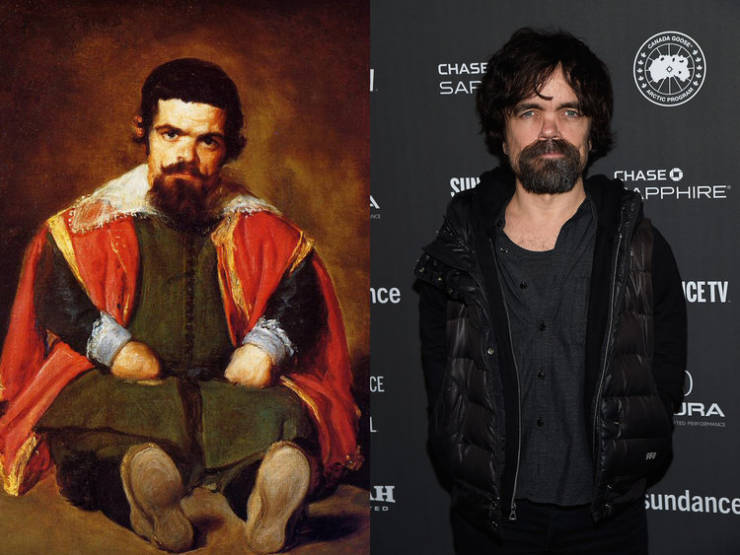 Dinklage also happens to look a lot like Velázquez himself.

Mark Zuckerberg looks like a former king of Spain and Portugal. 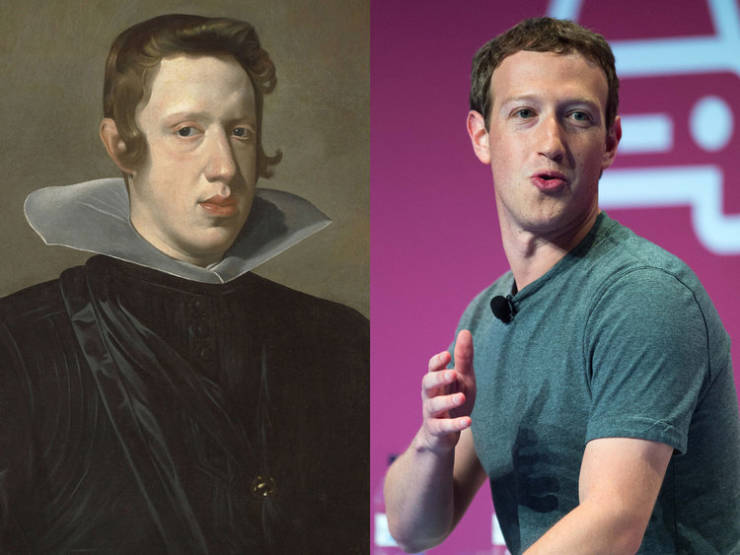 Velázquez had a knack for painting people who would look like former celebrities. His portrait of a youngish Philip IV of Spain — who reigned from 1621 until his death in 1640, and was also Velázquez’s patron — somewhat resembles Mark Zuckerberg.

They especially look alike in the above picture, which happens to have been taken while Zuckerberg was in Spain.

Orlando Bloom looks a lot like one of the founders of modern Romanian painting. 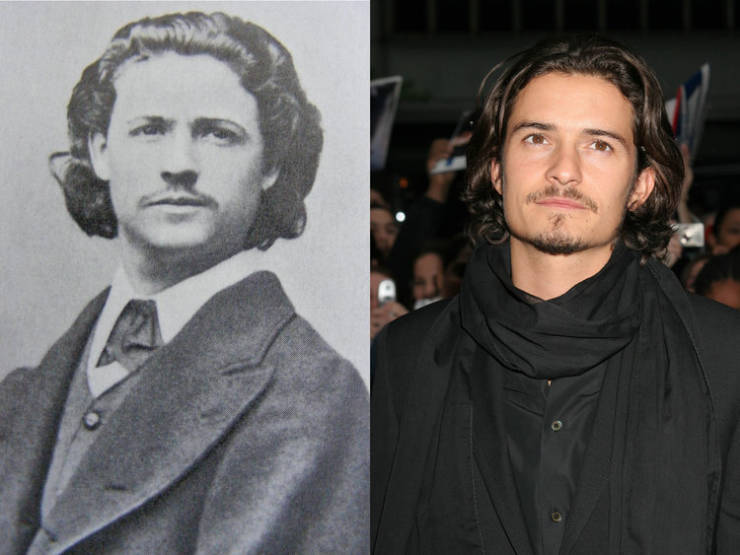 Circa-2005’s Orlando Bloom’s long wavy hair, confident brow, and thin moustache all make him look like Nicolae Grigorescu, an influential Romanian painter, writer, and soldier who lived in the 1800s.

Bloom also happens to be an enthusiastic painting collector. Maybe it’s because he knows a thing or two about the art form from experience.

Queen Latifah and Zora Neale Hurston had the same taste in hats. Coincidence? 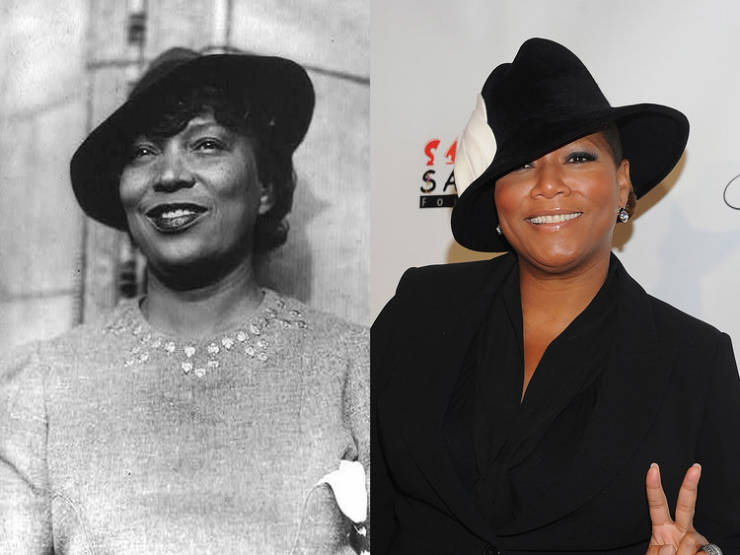 Latifah’s penchant for wide-brimmed hats sure recalls this portrait of Hurston, the novelist most famous for “Their Eyes Were Watching God,” as the Atlanta Black Star noted. Could they be one and the same? 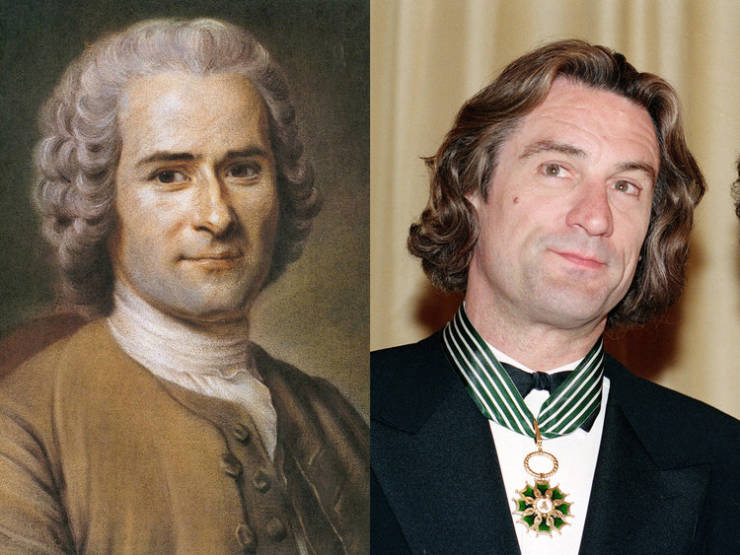 The two have the same strong chin and stubborn stubble. The resemblance becomes more prominent when you compare De Niro in 1993 to Rousseau in 1753. Did the “Taxi Driver” actor also write “Discourse on Inequality”?

Donald Trump is not the only president Alec Baldwin can play. 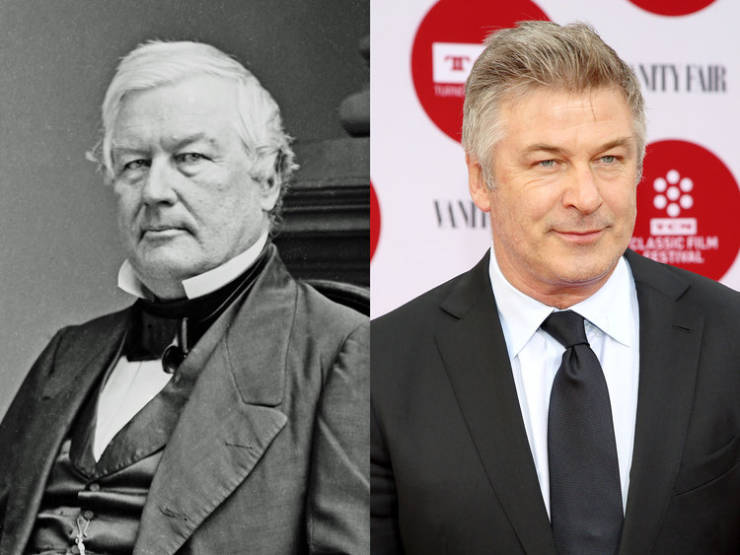 He sure does look like Millard Filmore, the 13th president of the United States, who was also from New York. 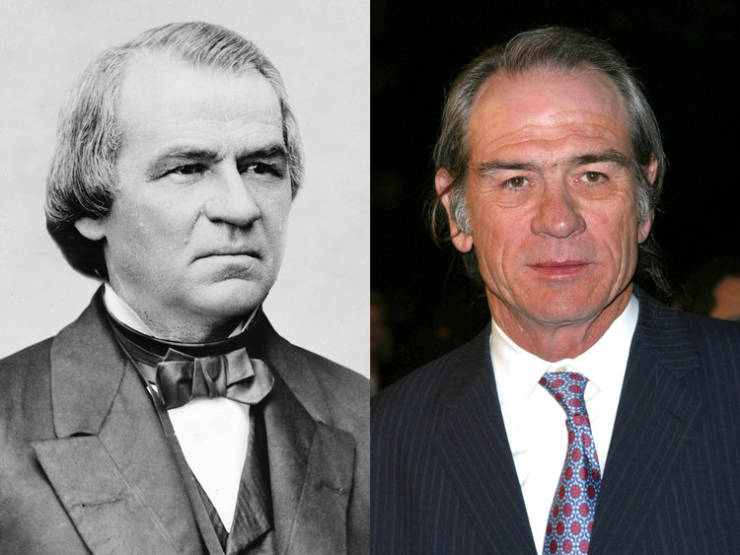 Andrew Johnson was Abraham Lincoln’s vice president and ascended to the presidency after his assassination.

He looks a lot like Tommy Lee Jones, who once played a very different figure in Lincoln’s life. In the Steven Spielberg-directed film “Lincoln,” Jones played Thaddeus Stevens, a Republican congressman from Pennsylvania who pushed Lincoln to guarantee for full abolition despite the Civil War. 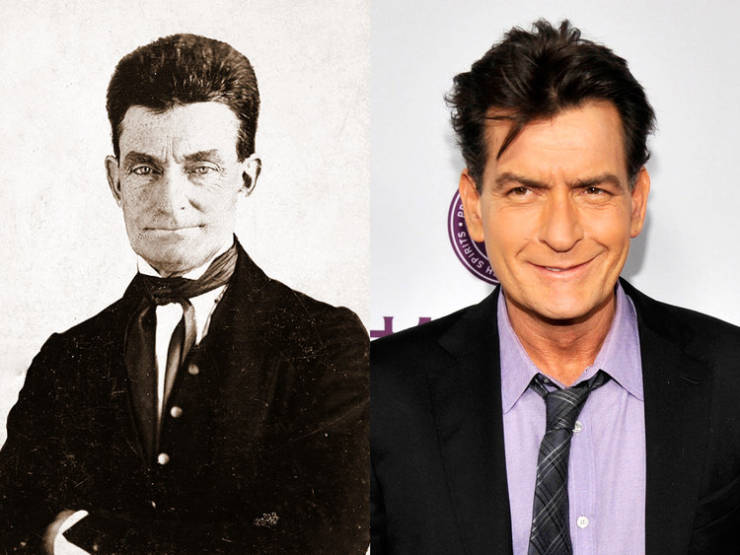 Brown, an abolitionist who helped lead several slave revolts in the 1850s — most famously with the movie-ready story of the raid on Harpers Ferry — looks like the disgraced “Two and a Half Men” actor.

The abolitionist movement had a lot of celebrity lookalikes. Ellen DeGeneres looks like Henry David Thoreau. 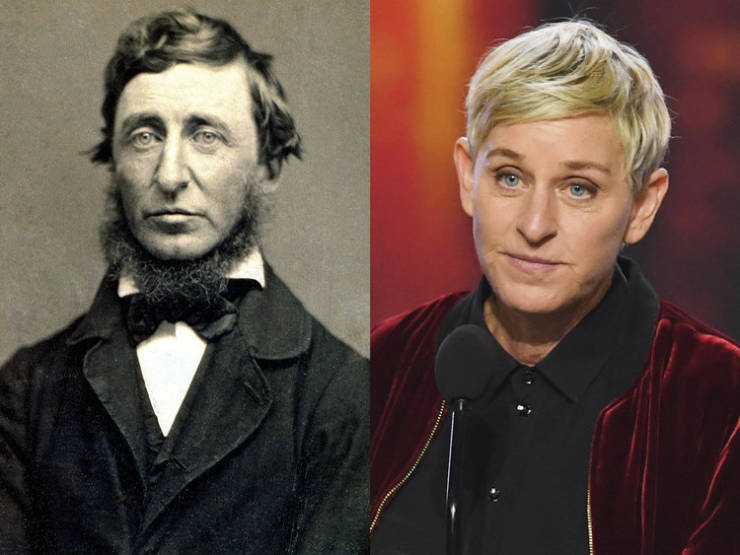 They have the same bright eyes and swept-aside hair. All Ellen needs is a scruffy beard and she’ll be set to play the “Civil Disobedience” author.

Rupert Grint resembles a fellow British artist — from 200 years ago. 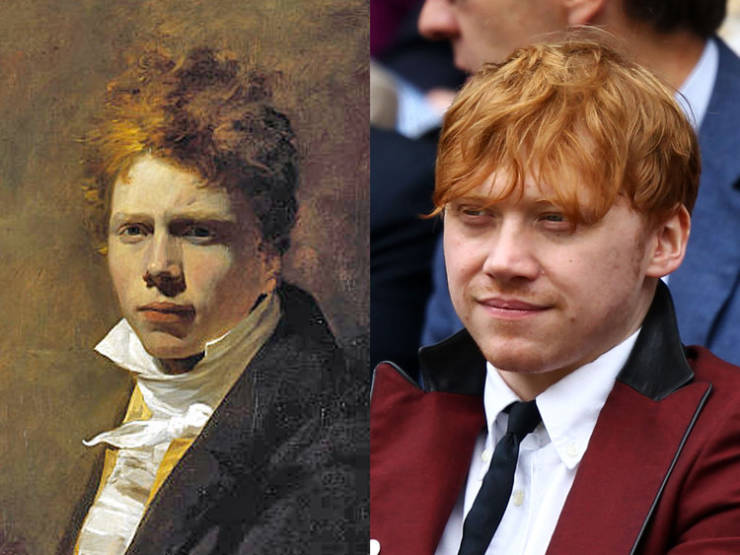 Scottish painter David Wilkie had the same fiery red hair. The self-portrait he made when he was around 20 years old in the early 1800s shows just how much he looks like the “Harry Potter” actor.

Albert Einstein is usually associated with his unruly hair and big moustache. But when he was younger, he looked quite a bit like Shia Labeouf. 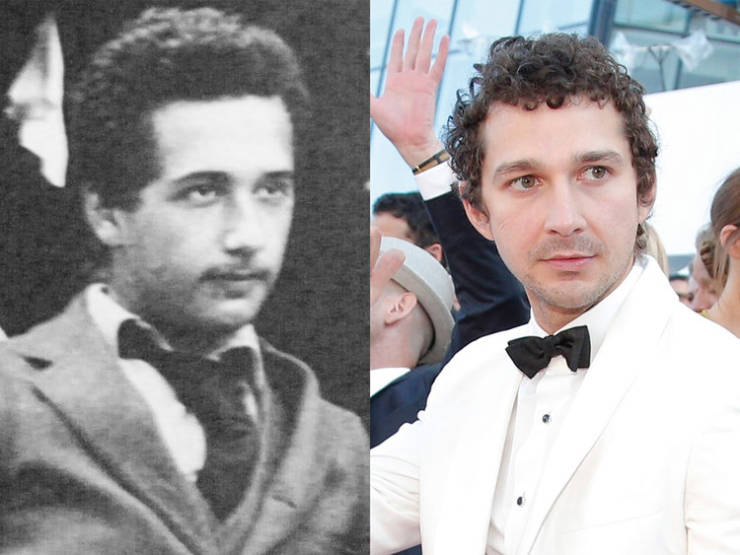 Labeouf has lately been dabbling in high-concept performance art pieces in addition to his acting. Soon enough, maybe he’ll solve the remaining problems in the Standard Model. Who knows?