With everything that goes into a film, the cinematography, the music, the special effects, the one key thing that makes or breaks a film is the talent. You’ve got to have the right people in the right roles, or else the film’s gonna bomb. So what happens if you lose one of them mid-filming? You improvise. 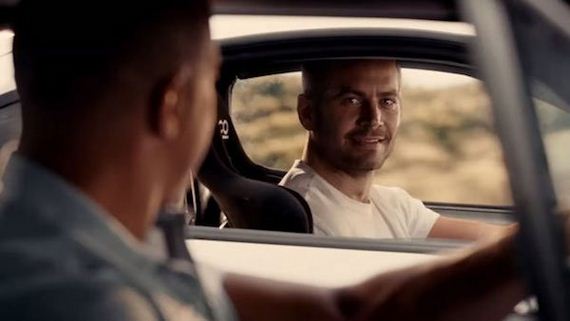 These flicks here had the misfortune of losing their stars mid-way though production and had to find a way to complete the film and not make it obvious that their actor is no longer there. In most cases, it changes the dynamic of the film, while in other’s it’s painfully obvious that there’s a stand-in and not the actual actor.

Still though, you’ve got to give them credit for pulling it off. 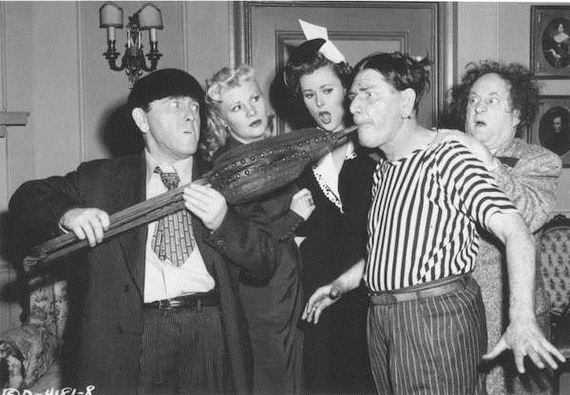 Rumpus in the Harem/Hot Stuff/Scheming Schemers/Commotion on the Ocean
Shemp Howard
This funny trio always had a shifting membership. It was always Moe Howard and Larry Fine, but when you went to watch the show on a Saturday morning, you never knew if you were gonna get a Curly or a Shemp Howard episode. In fact, Shemp was the original third Stooge, and then he left and was replaced by his younger brother Curly. After Curly suffered a stroke, Shemp returned.

In 1955, when Shemp Howard passed away, the trio still had 4 short films left in their contract, so they were forced to use stock footage and stand in’s to replace him. This led to the industry term “Fake Shemp” to refer to discretely hidden stand ins.

After that contract ended, the remaining Stooges hired Joe Besser and Curly Joe DeRita for their future films, but neither of these guys were as good as the Howard brothers. 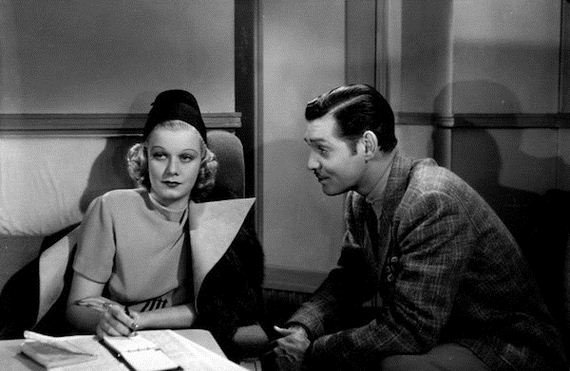 Saratoga
Jean Harlow
While filming Saratoga, Jean Harlow collapsed on set, due to a combination of sepsis from a bad wisdom tooth extraction and the early stages of kidney failure. She slipped into a coma and died shortly after. Despite having most of her scenes already shot, MGM considered re-shooting the entire film with a different actress, rather than leave it incomplete. Instead, the studio received a lot of fan mail asking them not to replace Harlow, but complete the film as a tribute. So two actresses were hired; one to be a “fake Shemp” and stand-in, while another did the voice. 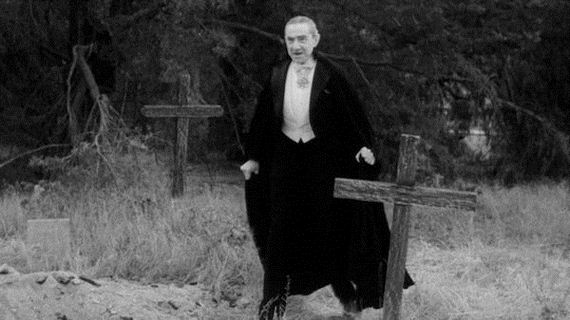 Plan 9 from Outer Space
Bela Lugosi
While the other films on this list were troubled by the death of an actor, Plan 9 from Outer Space, actually used the death of the actor as a selling point. Before his death, Lugosi filmed several out-of-context scenes with director Ed Wood. After his death, the director used this footage to attract investors and actors to his film, as Lugosi’s ‘swan song’ film.

During the actual filming, Wood asked his wife’s chiropractor to be a stand-in for Lugosi, even though he looked nothing like him.

This is one of the reasons why Plan 9 from Outer Space is the worst film ever made. 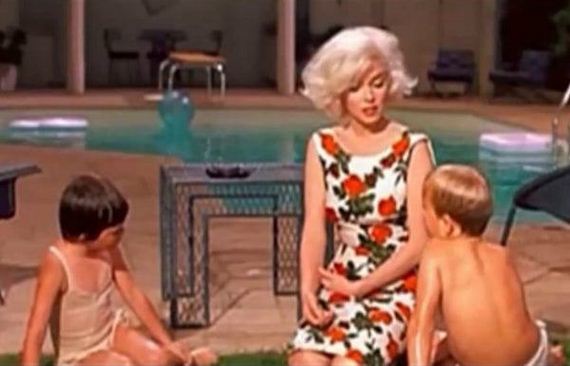 Something’s Got to Give
Marilyn Monroe
In the later stages of her career, Marilyn Monroe became a difficult actress to work with. She had numerous health issues, an addiction to barbiturates and was a huge believer in method acting. After missing several days of work on the film, she was fired, despite a planned skinny-dipping scene was that much publicized in Life magazine. Despite having shot a lot of footage, the studio wanted to replace her with actress Lee Remick. She was soon re-hired after her co-star Dean Martin refused to shoot without her. Before she could return to the set, Monroe was found dead, and the whole film was scrapped. 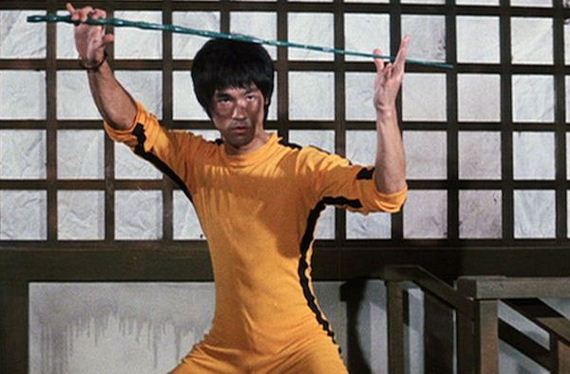 Game of Death
Bruce Lee
Before completing his last film Game of Death, Bruce Lee died of an allergic reaction to a painkiller. Only 39 minutes of the film had been shot with Bruce Lee, and only 11 minutes of actual Bruce Lee footage was used in the film. The rest of the film uses a series of disguises, which were all stand-ins. There’s even a point where a stand-in looks in the mirror, wearing a paper cut out of Lee.

Actual footage of Lee’s body in his actual casket were used in a scene where Lee’s character fakes his death. Now that’s a little too far. 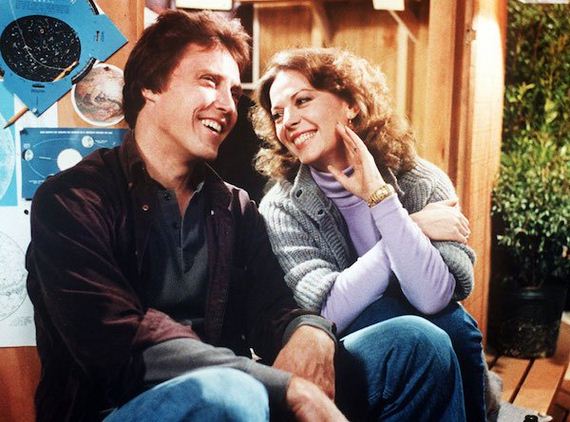 Brainstorm
Natalie Wood
During a break in production on this 1983 film, Natalie Wood mysteriously drowned while on a weekend boat trip with her husband, Robert Wagner, and co-star, Christopher Walken. Her death caused MGM to lose faith in the film and shut down production, and director, Douglas Trumbull to retire.

After Lloyd’s of London paid out the insurance on the loss of the lead actress over the next year, MGM decided to finish the film, and Trumbull returned. The film was completed by using the majority of Natalie’s footage (as she mostly completed her work), and rewriting the remainder of the film. They also used Natalie’s younger sister as a stand-in for remaining scenes. 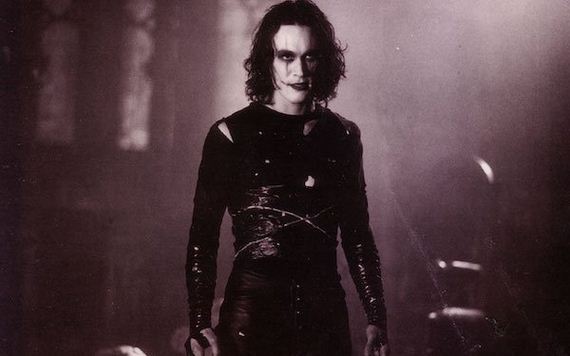 The Crow
Brandon Lee
One of my favourite films, this 1993 film show’s what a talented actor Brandon Lee was. He was accidentally shot and killed by a prop gun that was improperly cleaned and reloaded, shooting out the blank as a projectile and hitting Lee in the abdomen. Fortunately, Lee had finished most of his scenes, and the remainder were shot with his stunt double and Brandon’s face digitally added in. 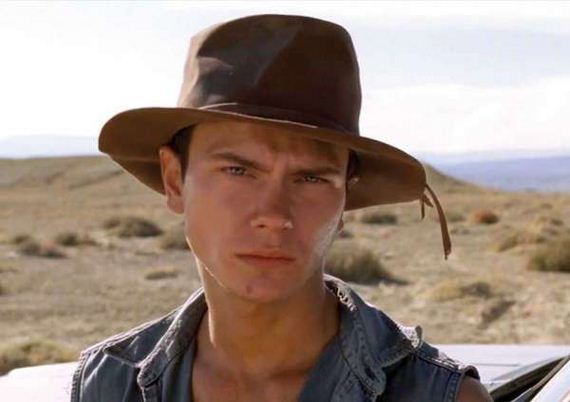 Dark Blood
River Phoenix
The filming of Dark River was pretty much much complete when River Phoenix was found dead of an overdose in 1993. Without the star, the film was scrapped. In 2012, the film was released with narration filling in the missing scenes that were supposed to star Phoenix; 19 years after his death. 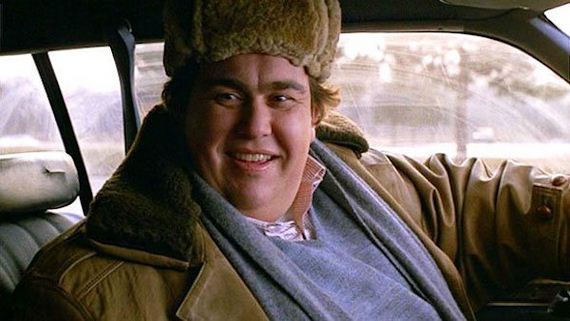 A Confederacy of Dunces
John Belushi/John Candy/Chris Farley
This is probably one of the most cursed book-to-film adaptations out there. The original novel was supposed to be adapted in 1982, with John Belushi to star. When he died, the project faltered.

Later on, both John Candy and Chris Farley were tapped to lead the production, but like Belushi before them, they died in pre-production. Thus far, no one’s attempt to adapt it since. 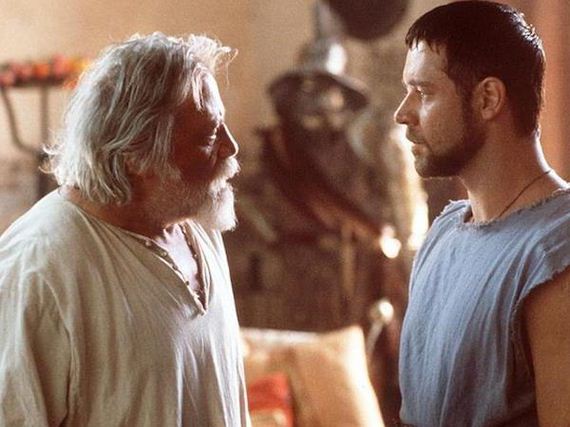 Gladiator
Oliver Reed
Before Ridley Scott’s Gladiator was finished shooting, veteran actor Oliver Reed had a heart attack and passed away. As a result, the post-production team had to create a digital double of Proximo, for the uncompleted scenes. It cost the studio $3.2 million, but it was worth it to honour Oliver Reed’s memory.

It earned him a posthumous BAFTA nomination. 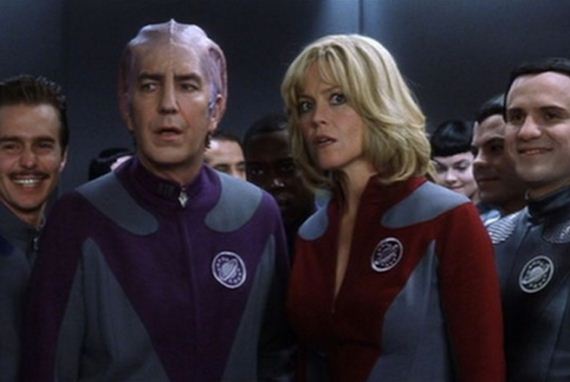 Galaxy Quest 2
Alan Rickman
Before the untimely death of Alan Rickman from pancreatic cancer in 2016, there were plans for a Galaxy Quest sequel or tv series to stream on Amazon. According to Sam Rockwell, everything was set to go, then Alan died, and Tim Allen’s schedule changed and now the show’s in limbo.

There’s a little bit of light, however. Recently it was announced that she show will still go on, in light of Last Man Standing’s cancellation, that will creatively work around the missing Dr. Lazarus. 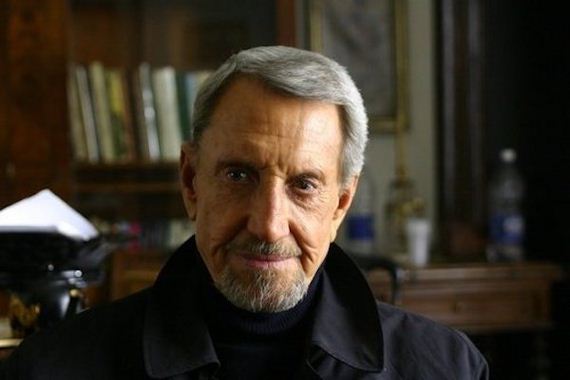 Iron Cross
Roy Scheider
During the filming of Iron Cross, Roy Scheider succumbed to multiple myeloma at age 75. The film at the time was halfway completed, so instead of scrapping the film, they placed a prosthetic mask with Scheider’s features on another actor, then tweaked it with CGI in post production. 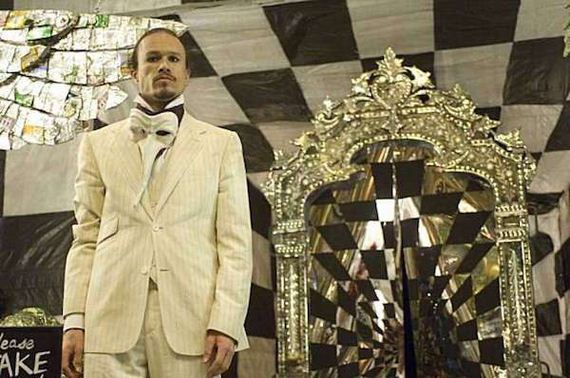 The Imaginarium of Doctor Parnassus
Heath Ledger
Just months after completing his work as the legendary Joker in The Dark Knight, Heath Ledger accidentally overdosed on his prescription medications and passed away while filming this picture. Fortunately, this Terry Gillam film is an impressionistic and trippy film that he was able to use Johnny Depp, Jude Law and Colin Farrell to finish the rest of the performance. Surprisingly enough, it works. 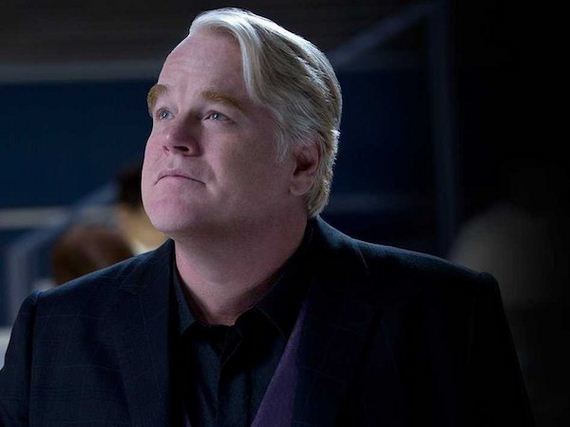 The Hunger Games: Mockingjay – Part 2
Phillip Seymour Hoffman
Hoffman’s role as Plutarch Heavensbee played a pretty key role in the films, and when Hoffman died of a drug overdose midway though the filming of the final film, it was thought that they’d use CGI to resurrect him. There was a big scene left to shoot that required his character. Instead of relying on special effects, the director instead opted to rewrite the scene to account for his absence and gave his lines to other actors. 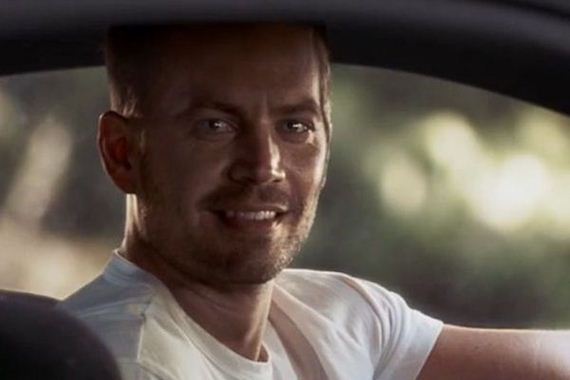 Furious 7
Paul Walker
Probably the most sophisticated and emotional replacement on the list, was when Paul Walker was recreated for Furious 7.

In probably the shittiest sense of ‘film becoming reality,’ Paul Walker lost his life in a fiery car crash, with his scenes incomplete in the film. The remainder of his scenes were completed by using his brothers as stand ins, as well as CGI technology for his face and voice. They also rewrote the film to serve as a send-off to Brian; one that still makes me blubber like a baby. 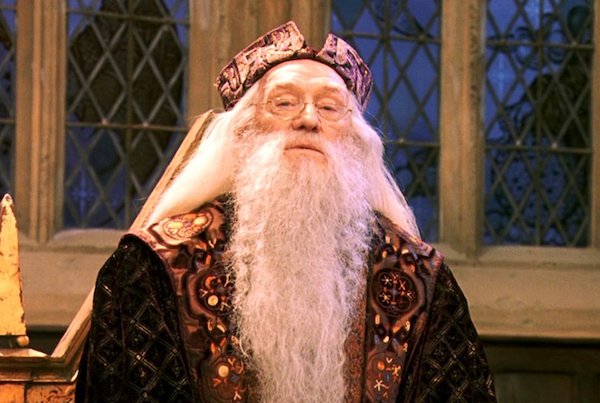 Harry Potter 3-8
Richard Harris
Not so much a film, as a series of films, but the role is iconic enough. After Richard Harris’ death before the release of Harry Potter and the Chamber of Secrets, the role of Dumbledore was recast with Michael Gambon in the role. To be honest, I really enjoy Harris’ performance in the first two, but I can’t imagine him doing all the badass stuff he does towards the end of the series.

Harris though, is still my favourite headmaster.