Samai Khammongkul leads a double life. On weekdays, he is a manager of “Charoen Pokphand”, Thailand’s largest private company and one of world’s largest conglomerates, but in his free time he puts on his custom Predator costume, gets on one of his four Predator-themed motorcycles and becomes an intergalactic trophy hunter. Khammongkul has been a fan of the Predator for over a decade, but only started making his own costumes and customizing motorcycles six years ago. 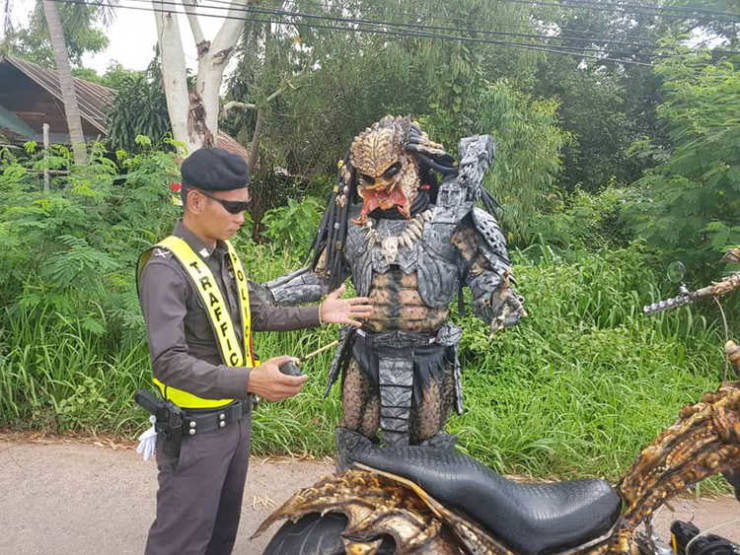 “I wanted to encourage and inspire the kids who weren’t doing so well in school,” Khammongkul told. “I was also not a good student, with around a 2.0 GPA, but it’s important to find out what’s unique about yourself. Everyone is good at different things, or good at different times in your life.”

Asked why he went in wearing his iconic Predator garb, the Thai man said: “You gotta go in with an out-of-the-world concept, or else they won’t remember you.”

Khammongkul makes the realistic-looking Predator costumes himself using rubber, clothing, foam and metal, and reportedly spends between 40 to 50 days on one. He also sells his creations to fellow Predator fans on Facebook, for about 55,000 baht ($1,800), which he says is a steal, as imported Predator costumes sell for at least 100,000 baht ($3,200).

“The head piece is actually also a helmet. I designed it this way so I can wear it while riding a motorcycle. I even cut a bit of the nose for visibility,” Samai said.

Apart from riding around Mukdahan province and giving inspiring speeches to school students, this Thai Predator also loves attending cosplay events and biker gatherings, as well as stopping for photos with random strangers. He just loves making people happy, and if that means posing for photos with strangers, he’s glad to do it.

“I like the Predator because he’s so hi-tech, Samai Khammongkul said about his love for the popular Hollywood character. “He’s got blades that come out from his shoulders, laser beams, stealth technology and a language translator. He can even scan someone to see if they have cancer, so he doesn’t have to kill them if they’re going to die anyway.” 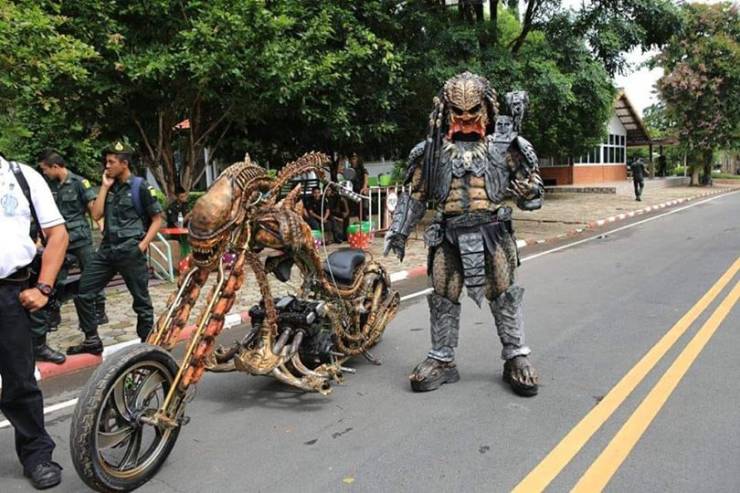 Loading...
Previous 17 Realistic Pet Masks Look Quite Macabre, To Say The Least
Next 18 Pure 80’s GIFs For You Neo-Maxi Zoomdweebies