If you grew up watching movies and TV shows featuring tons of princesses, fairies, and other cool ladies, you were likely not only enthralled with the characters, but also with the fantastical design of their costumes. Perhaps you raided your parents’ closets looking for similar items so you could embody a character while you ran around the house or outside on Halloween. However, did you think costume envy and an appreciation of an awesome gown had to stop with childhood?
We beg to differ.
JoEllen Elam of Firefly Path has created intricate, one-of-a-kind gowns for clients over many years. We recently got to chat with her about her amazing creations and what inspires her to bring fantasy to life.
ViralNova: How did this all begin? Where did you find inspiration for these beautiful pieces?
JoEllen Elam: In 1999, I wanted to create costumes for my sister and me. I asked my mom to buy me a sewing machine so that I could create the fairy costumes I had in mind for us, and thankfully, she did!
Many of the commissions are inspired by characters from films and TV shows, but all are given a seriously fancy treatment. 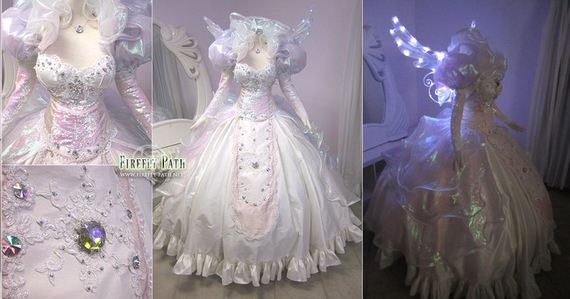 This is Elam’s take on a ball gown a human version of Princess Celestia from My Little Pony might wear. It’s even got LEDs in the gauze wings for a magical glow. 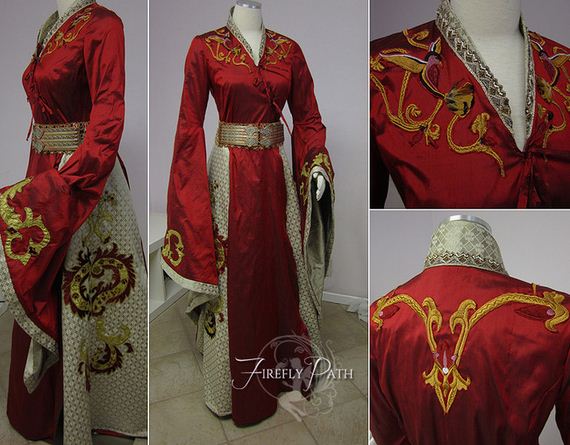 Cersei Lannister’s gown from Game of Thrones got a Firefly Path twist with some original detailing. The embroidery was designed specifically for the gown and even has real feathers in the birds’ tails.

ViralNova: Did these costumes evolve over time? What did you make first?

JE: For sure! My very first costume was a simple A-line dress with an elastic band at the top and waist. With each costume I made, I was developing a new skill or some new technique that helped me make my next project even better than the last! Learning to sew was kind of like leveling up in a video game! 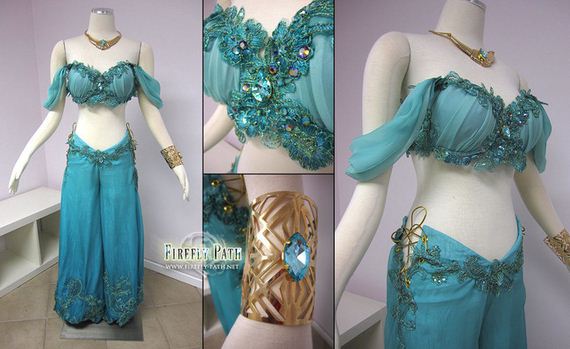 Elam has reworked a number of Disney princess costumes, making them even more opulent and gorgeous. This Princess Jasmine costume from Aladdin features enough jewels for a real princess, plus side slits for a little sexiness, making the costume more grown up. 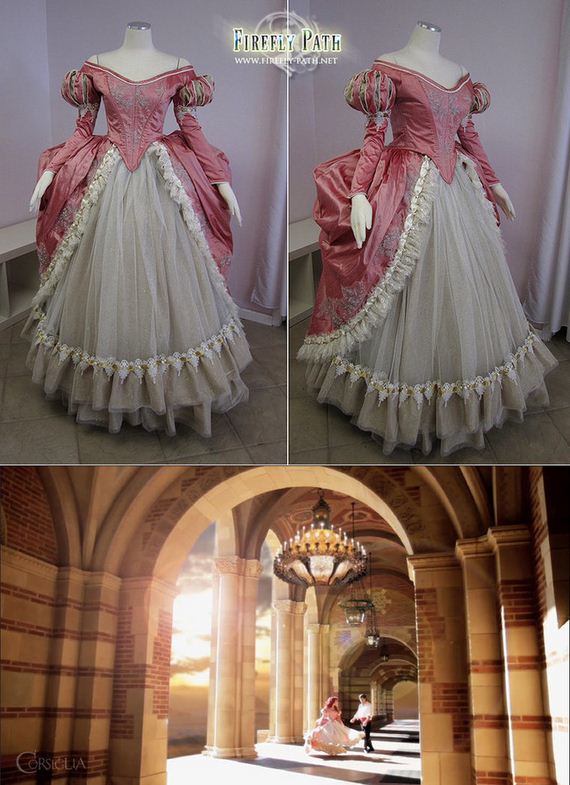 This dress is modeled after the pink ball gown Ariel wears in Disney’s The Little Mermaid. According to Elam, this dress only took two days to make. (Elam has help, of course.)

ViralNova: Who do you want to wear your pieces?

JE: Anyone with a love of fantasy and ornate gowns. Wearing these gowns is an escape from the everyday world, and I’m happy to create a gown for these people who need an escape.

This gown is a dressier take on the gown worn by Lady Almathea in The Last Unicorn (who is really a unicorn in human form). This was one of Elam’s favorite characters growing up. 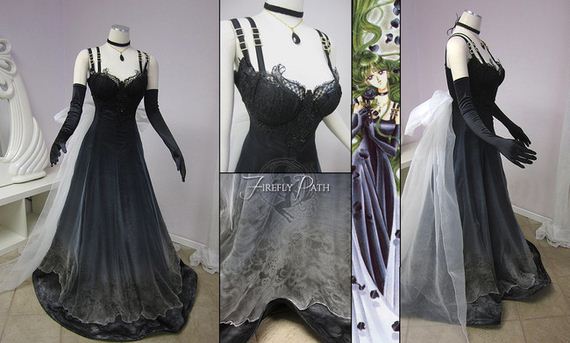 This darkly elegant gown was inspired by the character Sailor Pluto from the Sailor Moon manga series. You can see the original character in the narrow image here. Using subtle details like airbrushing and ombre, this gown is understated but beautiful.

ViralNova: How do you want people to feel when they wear your items?

JE: As though they are transported to another, more magical realm, place, and time. I want them to be the center of attention and admiration, like a magical creature.

Disney’s Snow White gets a truly royal look with this gown, which took its inspiration not only from the film, but also from historical fashions. 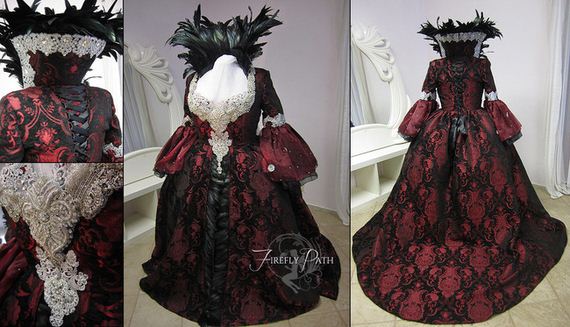 This gown is a re-creation of the character Regina Mills’ gown from television’s Once Upon a Time and explodes with feathers and lace. There’s even a custom-built petticoat underneath to give the gown its full shape.

This version of Belle’s gown from Beauty and the Beast took 50 yards of fabric to make—that’s half a football field in length. The darker, golden yellow gives it a more elegant, grown-up feel, and the red roses are an allusion to the roses in the movie.

ViralNova: What creations are you most proud of?

JE: That is a really hard question. With each new creation, I’m still learning something new, therefore I feel like each of my new creations are better than the last. I recently created a Fairy Queen Titania that I was really proud of. Sometimes it’s hard to let my commissions go.

Princesses don’t just have to wear gowns! The Little Mermaid‘s Ariel gets a playful, modern twist with this shiny, ruffled bathing suit (in a variety of colors). Yes please!

ViralNova: When do most people wear your works of art?

JE: Most of my clients wear my creations on their wedding day, at comic conventions, and at masquerade balls.

Elam often designs her own original gowns, taking inspiration from nature, mythology, and even her friends and clients.

This gown was inspired by moths and features natural elements like leaves and flowers.

JE: I’m working on focusing my work for brides. Every bride deserves to have something unique on their wedding day. I want to create something that will make them feel like a princess on their special day.

The horizontally stacked pieces of fabric on the Mother Earth gown were meant to evoke shelf mushrooms, which can be found growing all over forests.

ViralNova: Are the bridal gowns a new venture?

JE: It is fairly new. In 2014, I started making wedding gowns for clients (the same year I got married).

This Grecian gown was inspired by both Greek mythology and nature, and is an homage to Aktaie, a sea nymph who lived on the shore.

ViralNova: Can anyone place an order?

JE: Yes! My team of seamstresses and I take orders from all around the world for a variety of clients.

You might think a cape is simple, but not in Elam’s hands. This cape, inspired by forest spirits, includes a lot of subtle detail, including a set of sparkling branch “wings.”

Previous Can You Spot the Blatant Impostors in These Images?
Next This Is What A Real Bear Hug Looks Like