It turns out the idea Dennis and Mac had for the Paddie’s “Shot Gun” (which Frank later stole) wasn’t too far off of something someone was trying to develop in 1969. Never under estimate the American ingenuity when it comes to getting drunk in new and fun ways. 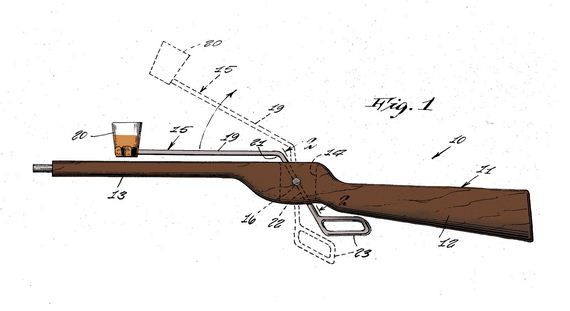 It turns out that there is this patent for a “simulated firearm with pivotally mounted whiskey glass.” The diagram above pretty much shows how it all works. If you break it down it’s pretty much a toy rifle with a shot glass on a lever that will allow the drinker to bring the shot glass to their mouth. But then again the design has a lot of flaws and looks like it’ll either bash you in the face or spill the precious alcohol everywhere. Lets hope someone invents a working booze dispensing gun.