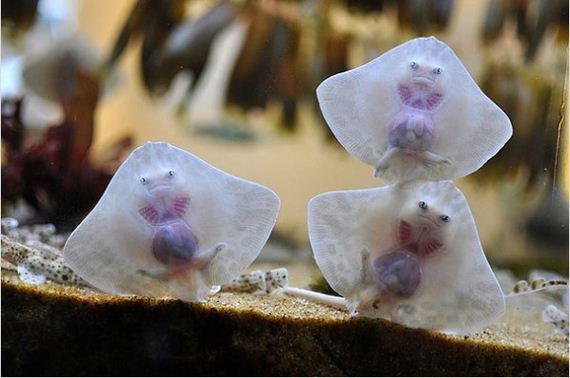 Baby Stingrays
We are almost speechless with these critters, but they are for real! What looks to be a pair of legs are called “claspers”, or modified fins. Claspers are only found on males, for mating.. so these three dancing babies are males!

Stingrays are found around the world inhabiting warmer tropical waters, they generally prefer deeper depths over shallow. Females breed in the winter and birth around 5 to 15 babies in a litter. The babies are actually milk-fed while inside the mother during gestation.
They don’t have predators except for sharks, and they’re solely carnivorous, not eating plant life. They are most known for their deadly razor-sharp stingers. They reach up to 14ft long, so seeing these little baby rays is truly wondrous!

Baby Pufferfish
This docile baby is one of the most poisonous creatures in the world. It’s not that they’ll “bite”, they’re deadly only if you eat them! The Pufferfish has many names which all describe it’s appearance, but in science its species is termed, Tetraodontidae.
What’s adorable is the baby looks exactly similar to an adult, just much smaller. Puffers can move their eyes independently. Many change color similar to a chameleon for defensive camouflage. Although they swim very slow, its backup deterrence against a hungry predator is to “puff-up” even larger, making its many skin-spines an unpalatable prickly supper to be avoided!
Some cultures serve up the Pufferfish as a delicacy to eat. Trained chefs carefully remove the toxic inner organs, but if mistakes are made, they’re met with dire consequences. 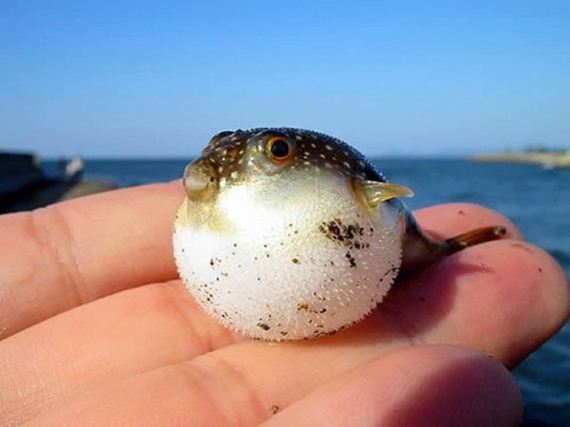 Fennec fox babies are so adorable! Sometimes they’re interbreed with domesticated dogs, and we’re wondering if that’s just what this pup is.
Fennec foxes are desert animals of The Sahara in North Africa. They been in existence for over 800,00 years, so they’re more than resourceful in harsh environments. They’re social and predominantly monogamous, with the male sharing in the pup rearing.
Their diet consists of mainly insects and they especially enjoy termites, eating approx. 1.15 million each year! The extra large ears amplify sound for locating insects, even those underground. Because of their small size (5-10 lbs), they’re hunted by many larger carnivores, but they’re fast moving and only come out of their dens after nightfall. 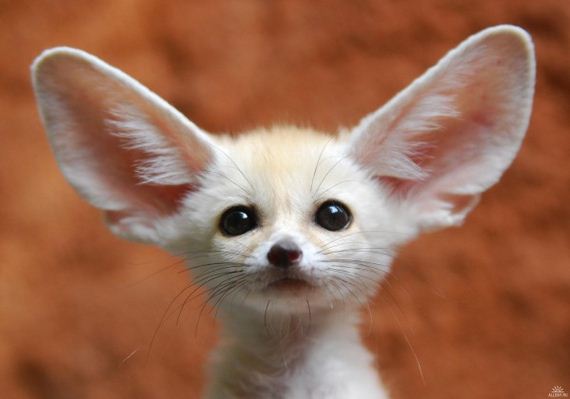 Aww this little spotted guy is trying to stare-us-down! Actually, he’s not sure whether to run or stay. The tapir’s natural home is in the jungles of South America, Central America, and Southeast Asia.
As they grow their spots fade similar to fawns. Adults measure approx. 7 feet long and 3 feet high. Some say they look to be a cross between a wild pig and a hippopotamus.
Like hippos they’re good swimmers and the water is their favorite place to be. Additionally, their diet consists of plant-life in and around rivers. They have a shy nature, but have been known to be violent and defensive when nursing babies. 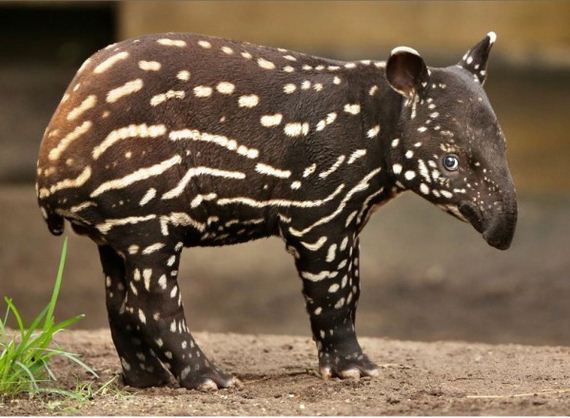 Don’t be fooled by cute overload, the Sand Cat (Felis Margarita) is a little-known species of desert cats. They live in the harshest deserts of Africa and Asia. They’re comfortable in environments other wildcats cannot handle, like the Sahara and Arabian deserts as well as those of Iran and Pakistan.
Sand cats look a like domestic cats, but they’re larger and thicker, especially around the head. Their ears are wider apart which flattens out when crouching down for the hunt. Fur lines their under-paws and between the toes to protect against the scorching sand.
The most incredible fact is this cat can go for months without drinking water! Oddly, as a wildcat they’re not afraid of humans. This cat is simply fearless and definitely impressive. 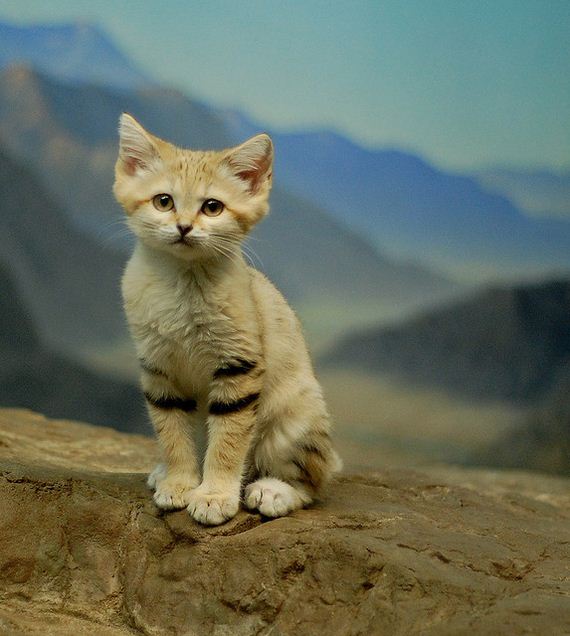 It’s so adorable, we can barely hold back the urge to touch! Caution, this prickly baby is equipped to defend. When babies are born their quills are soft but within an hour they harden like needles!
If you’re hiking in a forest (Americas, Southern Asia, and Africa), know they like to be near trees. Although they’re peaceful critters, if shocked or cornered they can pose a painful threat.
Here’s the scenario: Porcupine will make loud chattering noises as a warning. If this doesn’t work, they tense-up, tuck the head down and swing the tail. Quills shoot out and if lodged under the target’s skin, they will swell making them hard and painful to remove! 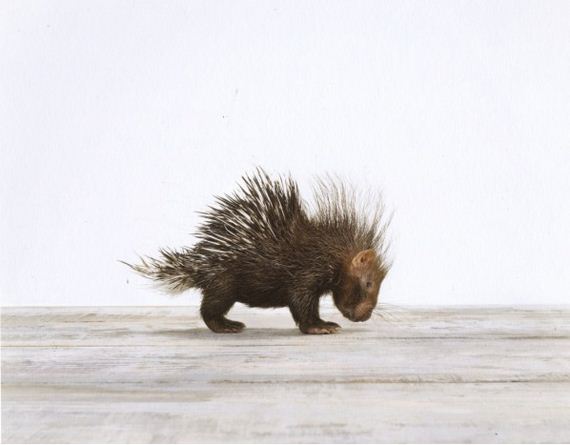 This cute little baby has the Meerkat’s “curiosity” trait in its eyes. Did you see, David Attenborough’s ‘Meerkat Documentaries’? Its enduring human-like drama is something you’ll not forget!
Meerkats are desert creatures, found in Botswana, southwestern Angola, and South Africa. They live in clan colonies, that can grow as large as 50 members! Their homes are burrows underground, which they leave only in the daytime to forage for food.
Perhaps what adds to their “humanness” is their incredible social behavior. Also ‘altruism” is big with the Meerkats as they will stand on hind feet, observing the environment for danger guarding another while it’s occupied. 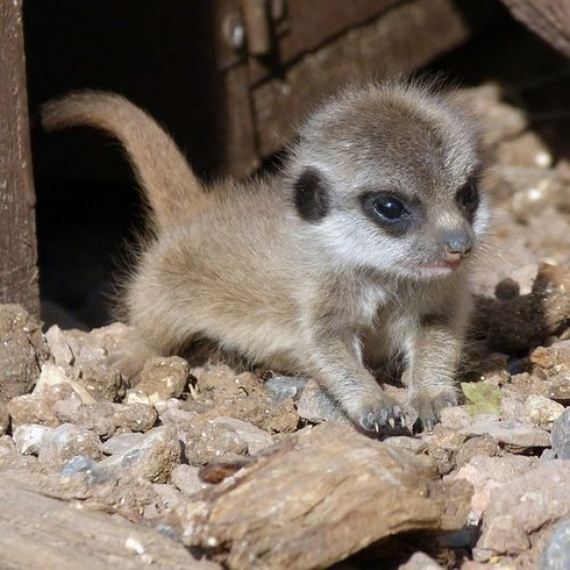 Have you ever seen anything cuter?! His name is Onya-Birri and we just want to squeeze! He’s the world’s only albino koala in captivity and can be found at The San Diego Zoo.
Onya-Birri was born in the zoo and as baby koalas do, he spent the first 6 months in his mom’s pouch. His albino trait was unexpected, zoologist hadn’t realized his parents carried the rare recessive gene for albinism. Koalas are marsupials (pouched mammals), they’re related to kangaroos and both are native to Australia.
Did you know The San Diego Zoo has the largest koala colony and the most koala births outside Australia? In 2012 the Australian Government declared the species “Vulnerable”, while the Australian Koala Foundation suggests their status be moved to the Critically Endangered list. 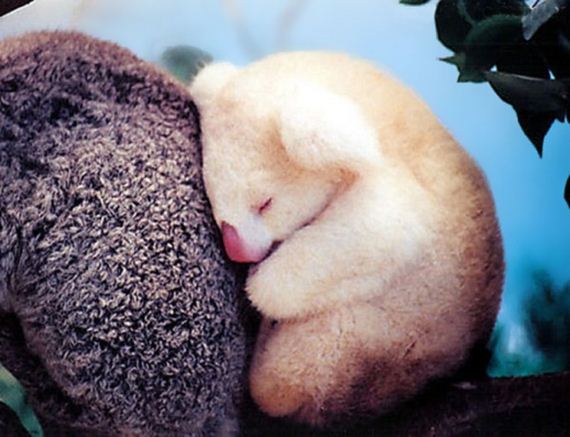 Peacocks must be spoiled! They’re lovely as babies (known as pea chicks) and they’re breath-taking as adults, especially the males, sporting colorful courtship plumage! Another name for Peacocks is Peafowl, they’re a part of the pheasant family stemming from Asia and Africa.
Charles Darwin wrote extensively on a theory that the peacock’s plums evolved through “sexual selection”. Although since then, scientists like Adeline Loyau have questioned Darwin’s beliefs, noting wider variations and reasonings for natural selection during mating, and the preferences of females don’t solely “correlate with the male’s physical condition”.
Possessing beauty can sometimes mean “trouble”! Some neighborhoods within the USA find the majestic birds to be a nuisance. Complaints are: they reproduce frequently, are noisy, messy and damage dark painted cars which they peck at because they find their reflection threatening. 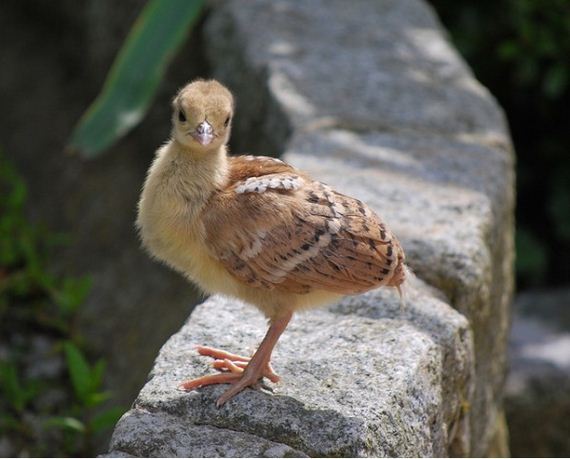 How can one not be charmed by this peaceful Baby Llama?! It looks like a delightful cross between a lamb and small camel! In actuality Llamas are a domestic South American herd animal derived from the Guanacos and vicuñas species which are wild, and indeed stem from camels.
How did the camel’s ancestor get to South America? It was discovered through fossil findings that North America was the native home to camelids. Thousands of years ago ancient camels traveled to Europe, Asia, and Africa over the Bering Straits. Also camelids spread to South America, while dying out in North America!
Today Llama farms are growing popular in North America, where they’re harvesting fur for textiles. Interestingly Llamas have come full-circle: “25,000 years ago, a Llama-like animals would’ve been a common sight in California, Texas, New Mexico, Utah, Missouri, and Florida”. These fellows look happy snuggled in blanket-wraps, but what’s the story here?! Normally we’d be a bit leery of bats, especially since they’re known to carry rabies. Though, these cute pups are actually Fruit Bats being cared for by a Wildlife rescue shelter in Australia, and surely they’ve been tested.
The shelter takes in injured bats and orphaned babies, whose mothers died during storms or from diseases. Similar to human babies, they are comforted while swaddled and even given pacifiers! Eventually the Fruit Bats are released into the wild once they’re able to survive on their own.
Fruit Bats are the smallest of bat species. With fruit being a big part of their diet outside of flower nectar, these bats help distribute plants to other locations by carrying and spreading seeds. This is not your usual primate, but if you look closely it has 5 divergent digits with nails! Such a cute character!! The Bush Baby is a Prosimian Primate and in the same family as the Lemur; Galago is its classification of species.
They are native to Africa and Asia, not Madagascar where their cousin the Lemur lives. Also the Lemur’s diet consists mainly of vegetation, and Bush Babies rely much more on animal protein for their diet. This hunter is nocturnal and is stealthy at catching snakes, rodents, insects and birds.
It’s said that they are nocturnal due to competition with other advanced primates who share the same diet. Being a night forager, they’ve evolved an amazing sense of sight and hearing.. just take a look at the size of those eyes! 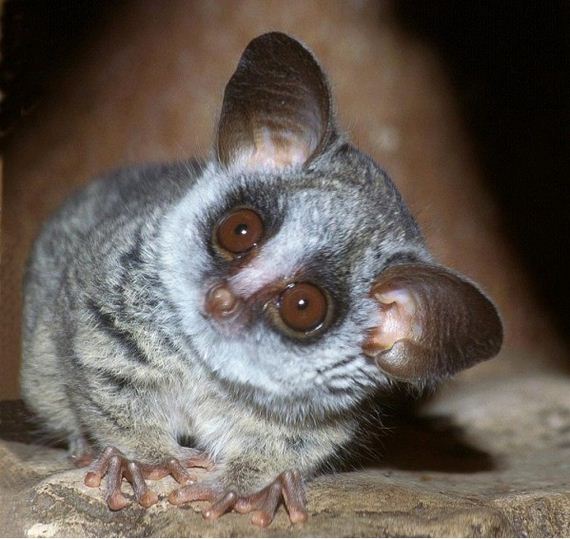 Pudus are the world’s smallest deer, so imagine how tiny this baby is! As an adult the South American deer stands 13 to 15 inches high and weighs approx. 18 pounds. It’s said that if you frighten a Pudu, it’ll bark similar to a dog although they’re not related.

Their habitat is throughout parts of South America. In 2009 it was classified “Endangered” on The IUCN Red List of Threatened Species . They are a solitary animal and secretive, therefore much of their nature is unknown.

They tend to be delicate and cautious, and it’s said that stress and fear could be a factor in their short lives, around 8 – 10 years in the wild. They succumb to a wide range of causes and mothers are often known to abandon their young, which contributes to their declining population. 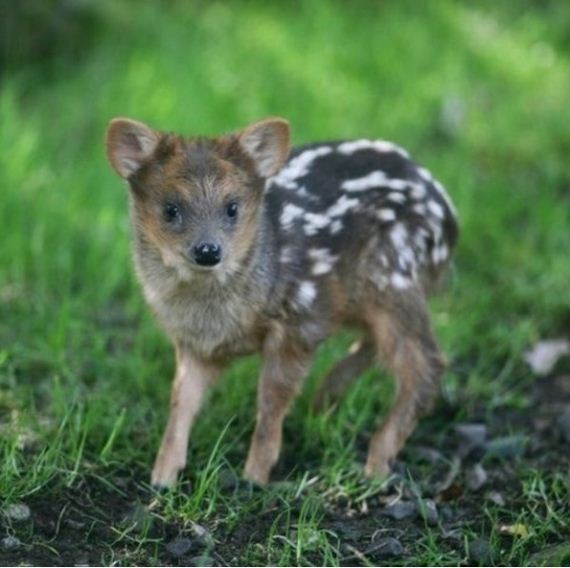 This perfectly formed baby Bottlenose Dolphin is a replica of its adult counterpart. It must have great strength and agility, to leap out of the ocean at such a young age. It’s amazing to see an adult jump, can you imagine a little baby.. is it smiling?!
Dolphins are marine mammals related to whales and porpoises. They’re one of the most intelligent animals around, not to mention their friendly and playful personalities! Dolphins are extremely social and live in groups called pods or superpods, numbering from 12 to over 1,000 individuals.
Dolphins communicate with sounds and develop strong social bonds. They are known to show empathy with assisting members in the pod who are ill. Also there are documented stories of dolphins helping and saving whales and even humans in need. 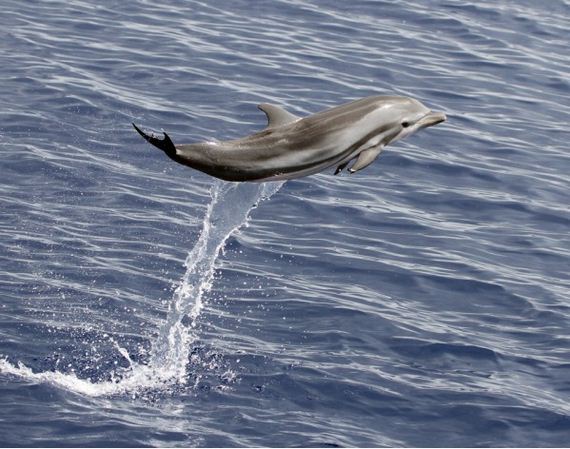 Tasmania has some of the rarest animals and the Golden Brushtail Possum is one. This cutie can be seen at the Wild Life Sydney Zoo in Darling Harbour. Although they are not albino, their fair-colored fur and pink tinge around dark eyes are due to the low melanin in their skin.
Unfortunately what makes them so special, also makes them an easy target for predators to see. Their fluffy coloring prevents them from hiding in foliage, therefore they’re only found in small areas that contain fewer wild predators. Like all possums, the Golden Brushtail is traditionally nocturnal. It forages mainly for vegetation like eucalyptus leaves, but also includes in its diet small mammals like rats.
Possums are hunted for their fur in many areas of Australia. Luckily this little baby was born at the zoo, as part of a breeding program. 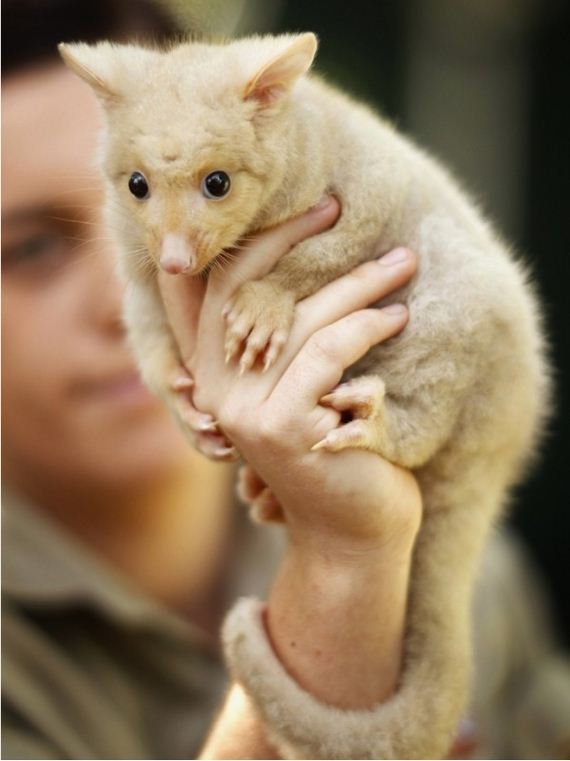 Previous A Pet Can Be Your Best Friend…If They Let You Find Them. They’re All Ninjas.
Next This Guy Converted His Old Van Into An Awesome Hobbit Home You’ll Envy