The Best Photos From The “2020 BigPicture Natural World Photography” Competition

When the California Academy of Sciences announced their 2020 BigPicture Natural World Photography competition, the main idea was to “both celebrate and illustrate the rich diversity of life on Earth and inspire action to protect and conserve it through the power of imagery”. And competitors definitely managed to grasp it. 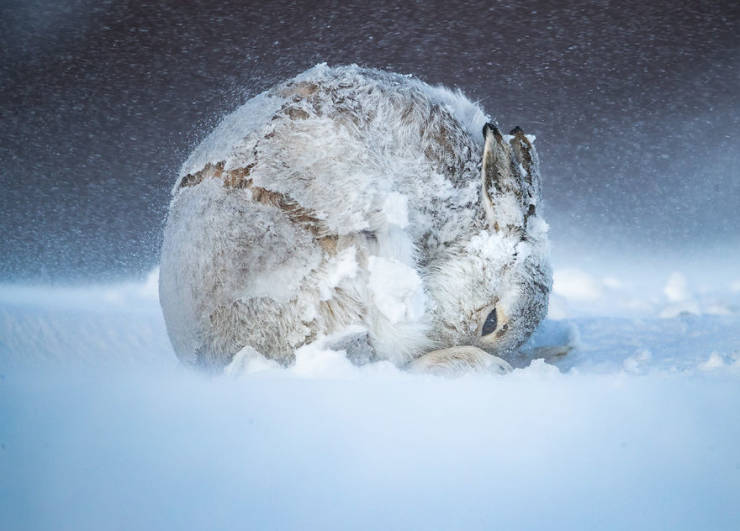 “To get this intimate shot of a mountain hare (Lepus timidus) curled up against a Scottish winter storm, Andy Parkinson endured weeks of ferocious cold and wind that drove shards of ice into his face. Britain’s only native rabbit species, on the other hand, is utterly at home in these inhospitable conditions. Groups of twenty or more hares gather each winter to nibble heather on leeward slopes, where the snow tends to be shallower. Before resting, they jump away from their tracks to confuse predators. And while some ride out storms in burrows or depressions, this female created her own shelter, tucking herself into a ball to conserve heat and minimize exposure to the elements. It’s a nifty strategy for surviving the kind of weather that drives most creatures indoors or underground.

Despite their fortitude, mountain hares are Britain’s fastest-declining mammal, due to unregulated hunting and habitat loss. Parkinson hopes that calling attention to these remarkable rabbits will convince legislators to protect them.” 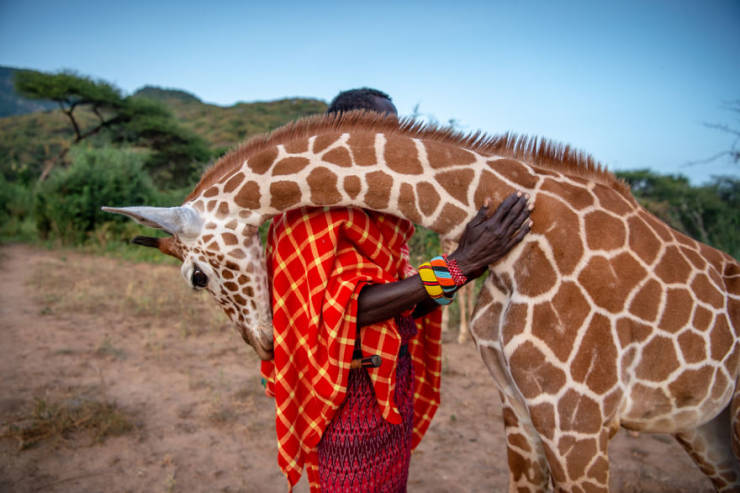 “Too often, says Ami Vitale, nature photography excludes the humans whose lives are intertwined with the natural world. Her decade-long project documenting the bonds between Samburu people and wildlife in northern Kenya reverses this oversight, telling the story of how Samburu people became advocates for wild animals and their habitat.

For as long as Samburu people have grazed livestock, their livelihood has been seemingly at odds with the elephants, rhinos, giraffes, and other large mammals with whom they share their homeland. But as poachers decimated elephant (Mammalia proboscidea) populations in recent decades, Samburu herders realized their cattle were also suffering. Elephants promote grass growth by clearing brush and small trees, so as their numbers shrink, there’s less grass for cows to graze on. In response, the Samburu launched a sanctuary to rehabilitate orphaned elephants, along with other conservation programs that benefit threatened species like the reticulated giraffe (Giraffa camelopardalis reticulata), shown here. These efforts are changing long-standing Samburu attitudes toward wildlife, and show how the health of human and animal communities are connected. “Indigenous communities hold the key to saving Africa’s great animals,” says Vitale. “Where these communities are intact, poaching has dramatically decreased.”” 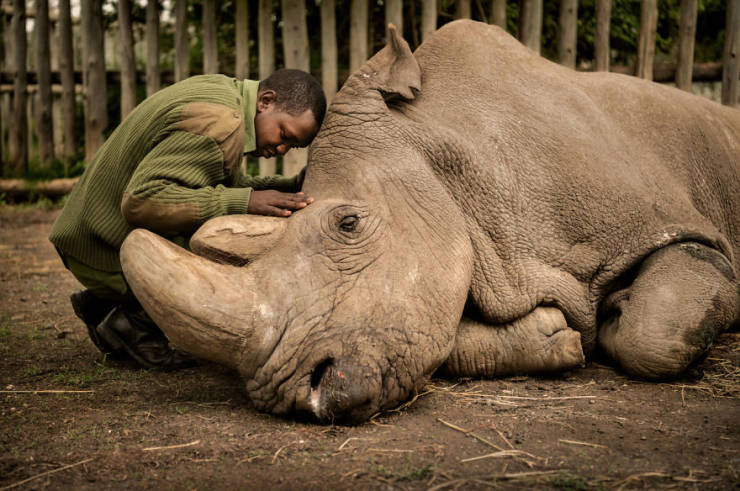 “Joseph Wachira comforts Sudan, a northern white rhino, moments before the animal died at the Ol Pejeta Conservancy in Kenya in March 2018. Sudan was 45 years old and in poor health” 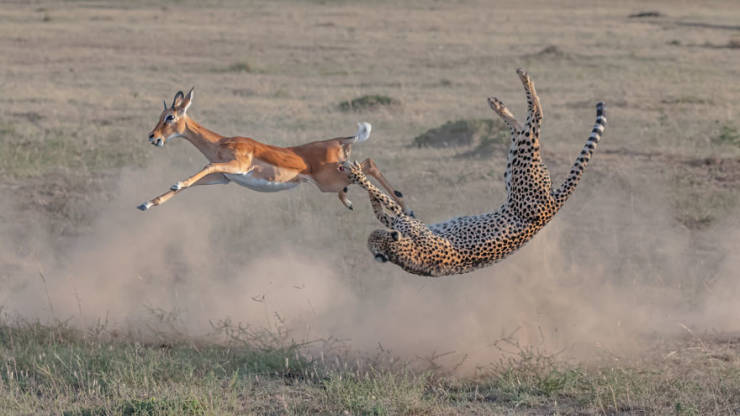 “Although they’re the fastest land animals in the world, catching prey is no easy feat for a cheetah (Acinonyx jubatus). The mostly treeless terrain of the African savanna gives antelopes, impalas, and other ungulates ample time to spot approaching predators, and even a slight head start can be the difference between life and death. To avoid alerting their prey, cheetahs start out hunting low to the ground, where their spotted coat helps them blend into the terrain. When they get within 60 meters (200 feet) of their target, cheetahs accelerate at a blistering pace, reaching 95 kilometers (60 miles) per hour in a matter of seconds. But the feline predators still have to account for the speed of their prey—in this case an impala (Aepyceros melampus), which can zig-zag at upwards of 80 kilometers (50 miles) per hour. To close the gap, this cheetah tripped its quarry as it attempted to escape, proving that sometimes, strategy is just as important as speed.” 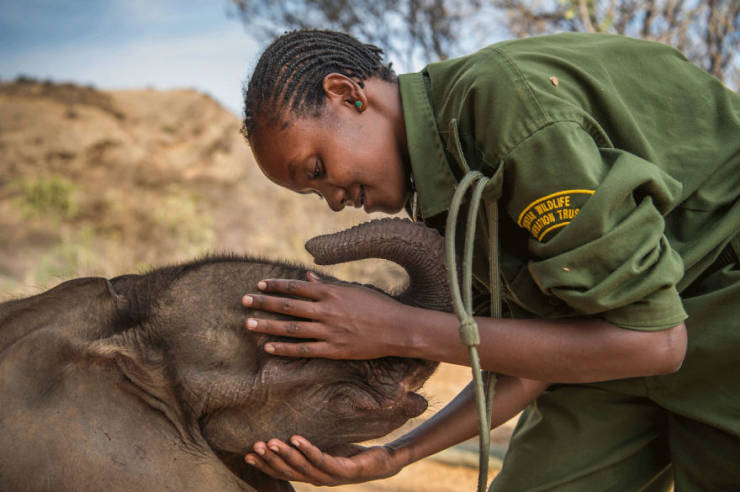 “Traditionally, the Samburu women of northern Kenya are married off at a young age without an education, let alone a chance to work. But as the first female head keeper of the Reteti Elephant Sanctuary in the remote Mathews mountain range, Sasha Dorothy Lowuekuduk is breaking new ground. Though she and the women who work for her encounter resistance, the team at Reteti is united in its mission to rescue abandoned elephant calves, nurse them back to health, and reintroduce them to the wild. It requires vigilance and round-the-clock care, but Lowuekuduk’s passion for saving these 200-plus-pound babies knows no bounds. In a world where we focus only on the challenges and things that divide us, it’s important also to talk about the solutions.” 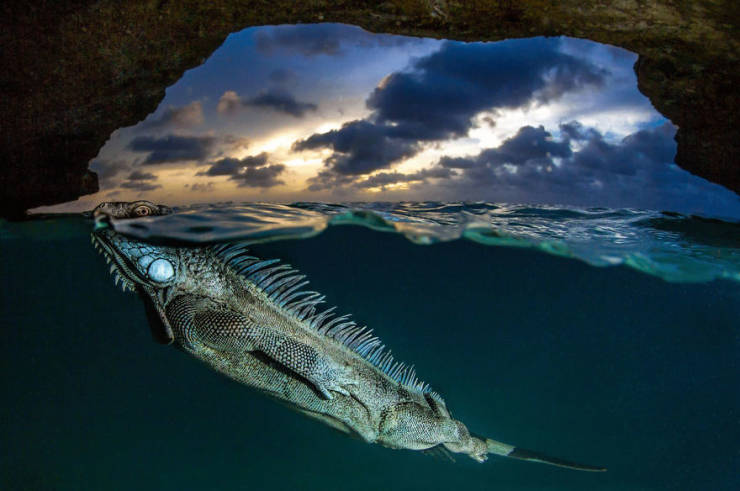 “There I was, fully equipped with my camera, its underwater housing, and a wide-angle lens, preparing for the final setting of the sun, when a friend interrupted my solitude,” writes Mittiga, a member of our Your Shot community. “He had dived into the water above my head and was swimming around the entrance of the cave, as if to say ‘hello’ to me.” 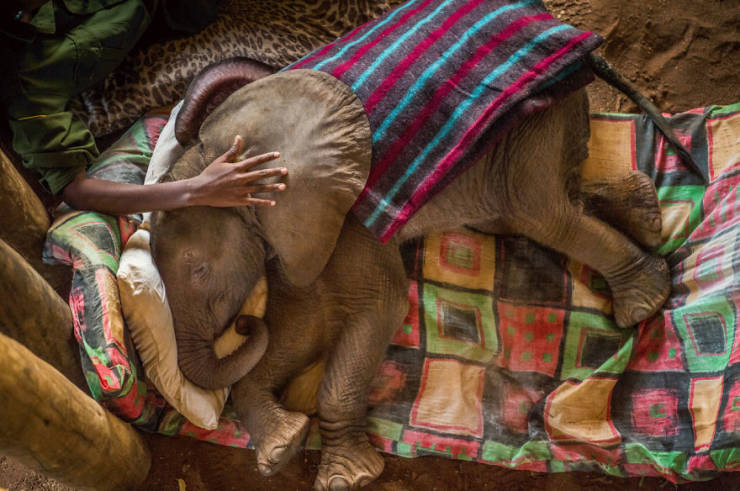 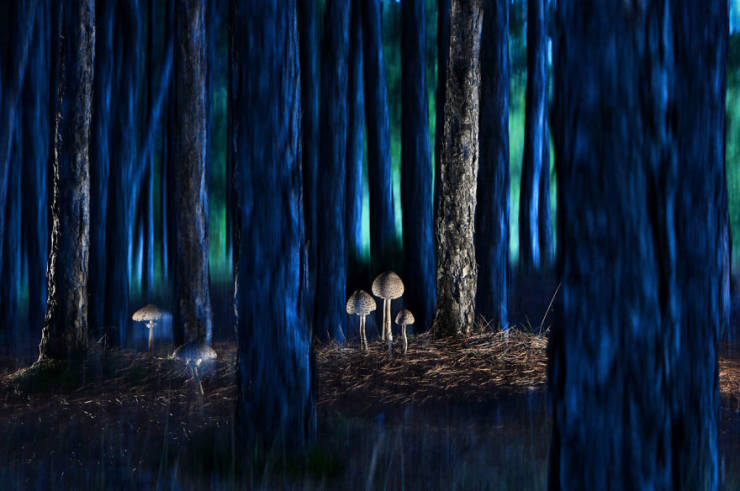 “Despite the ethereal appearance of this photo, these edible mushrooms (Macrolepiota procera) won’t induce any hallucinations. But that doesn’t mean they aren’t magical. Indeed, the more we learn about mushrooms, the more magic they seem to harbor. From helping trees communicate to producing cancer-fighting metabolites, scientists have only begun to uncover the fantastic features of fungi.

At the root of many of these capabilities is the unique role that mushrooms play in the environment. As primary decomposers, mushrooms break down the organic matter of dead plants and animals. In return, the fungi become flush with essential nutrients and minerals, a number of which can confer antioxidant, antimicrobial, and anticancer benefits to humans. This same ability also makes mushrooms exceptional environmental remediators, ingesting the toxins and heavy metals that various industrial practices have leached into the soil.” 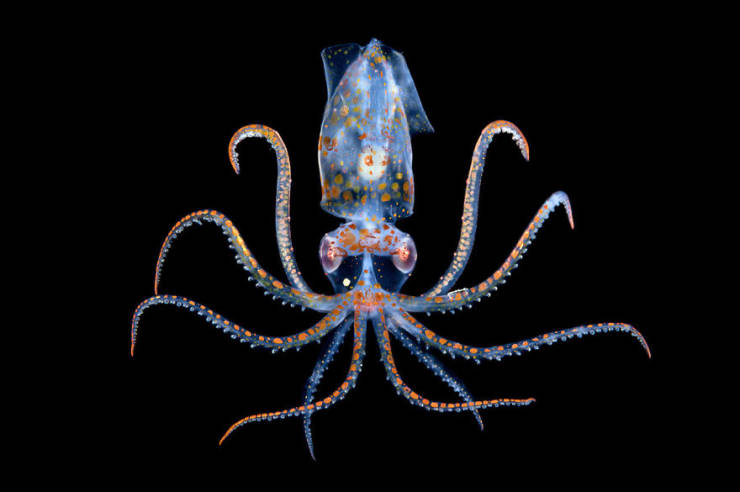 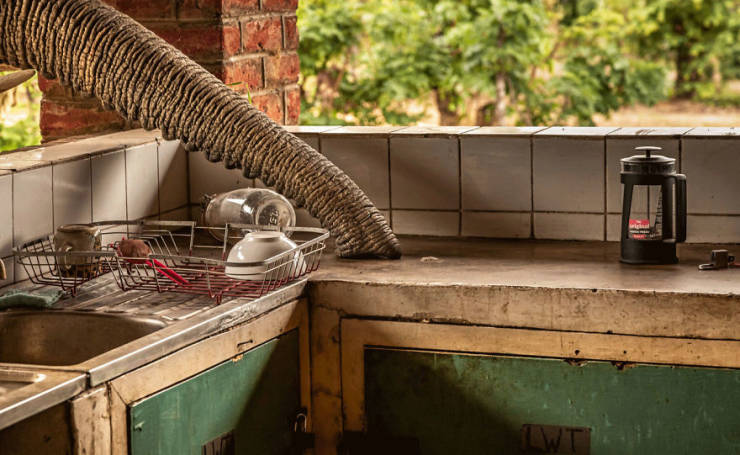 “After an unsuccessful attempt at grabbing a snack, this African savanna elephant (Loxodonta africana) took out its frustrations on the roof of an open-air kitchen in Malawi’s Kasungu National Park. Photographer and biologist Gunther De Bruyne says such destruction was common during his stay at a research station there. But, De Bruyne adds, there’s a reason why Kasungu’s elephants are unusually dangerous: He and other scientists have found that elephants from heavily poached regions tend to be more aggressive.

In 1977, more than 1,000 elephants roamed Kasungu. By 2015 poaching had reduced the population to just 50. While recent ivory bans might be turning the tide—there are now over 80 elephants in the park—recovery takes time, especially among animals as intelligent and long-lived as elephants. Maybe on De Bruyne’s next visit, the kitchen roof will remain standing.” 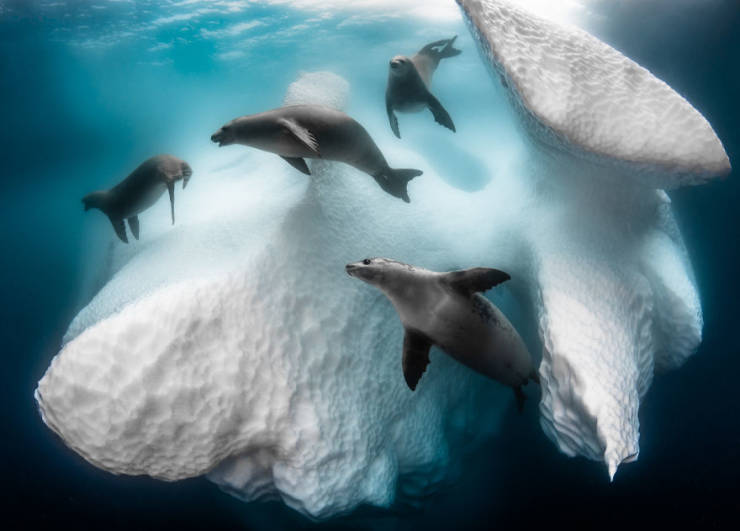 “French photographer Greg Lecouer braved frigid waters to catch this rare glimpse of life below Antarctic ice, where he encountered a crew of crabeater seals (Lobodon carcinophaga). Clumsy and laborious on land, crabeater seals are elegant and agile swimmers that spend their entire lives in the pack ice zone surrounding the frozen continent. Buoyed by polar currents, icebergs calve off mainland glaciers, carrying minerals and nutrients from land into the ocean. Once sea bound, the icebergs slowly melt, releasing critical nutrients in their wake and providing seals with both food and shelter. The fertilized waters prompt a bloom of phytoplankton that attracts krill—which, despite the crabeaters’ name, is a favorite meal of the seals.” 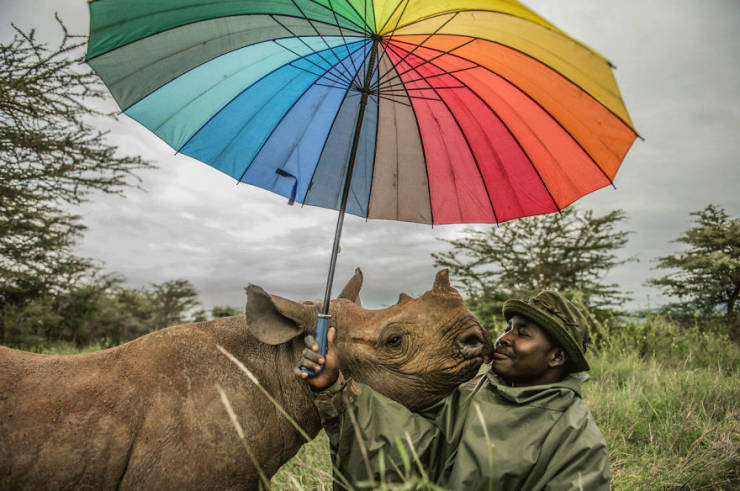 Terrestrial Wildlife, Finalist, Yeye In The Mist By Ami Vitale 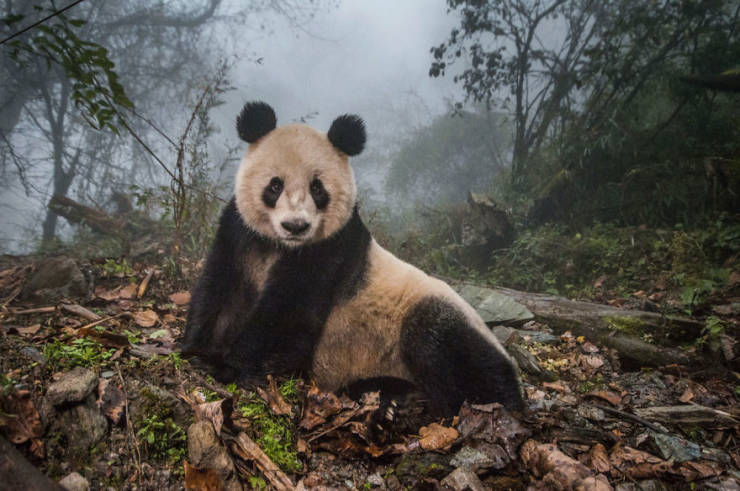 “A 16-year-old bear called Ye Ye – named to celebrate the friendship between China and Japan – lumbered out of the mist. Gingerly, Vitale stuck her camera through the fence as Poon lofted the LEDs.

Vitale says the large black-and-white creature posed “like a supermodel.”

“She just came up for a moment,” Vitale said, “like a magician. And just showed up and disappeared, as pandas do. They’re very good at disappearing.” 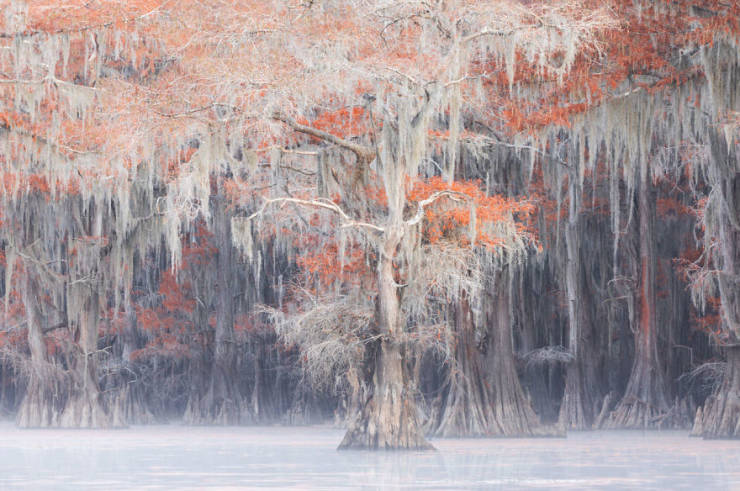 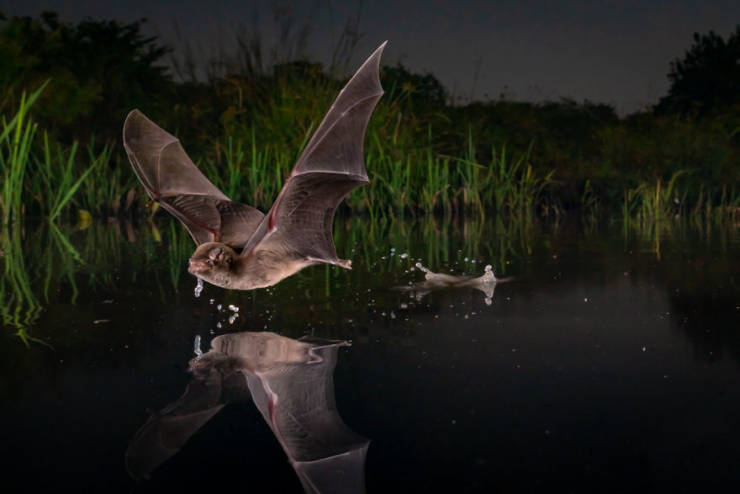 “In Gorongosa National Park, at the southern tip of Africa’s Great Rift Valley, water breathes with the seasons. Lakes and rivers that overflow during the winter months are reduced to puddles and trickles come summer. For many species—including the Mozambique long-fingered bat (Miniopterus mossambicus)—the dry season means longer journeys for a much-needed sip of water.

As our planet warms and droughts increase in both frequency and intensity, the seasonal oases that bats depend on are drying up. Without adequate water, healthy bats begin to weaken, making them more susceptible to diseases that are already devastating populations around the world. Those that survive are sometimes forced to drink from human-made bodies of water—a boon for bats, but a potential risk for people who drink from those same water sources, since bats carry a host of zoonotic diseases. It’s often at these interspecies interfaces that killers like Ebola and the novel coronavirus emerge.” 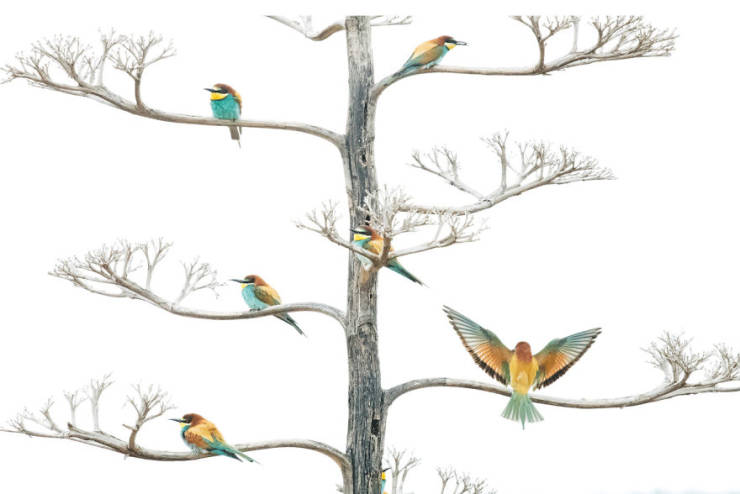 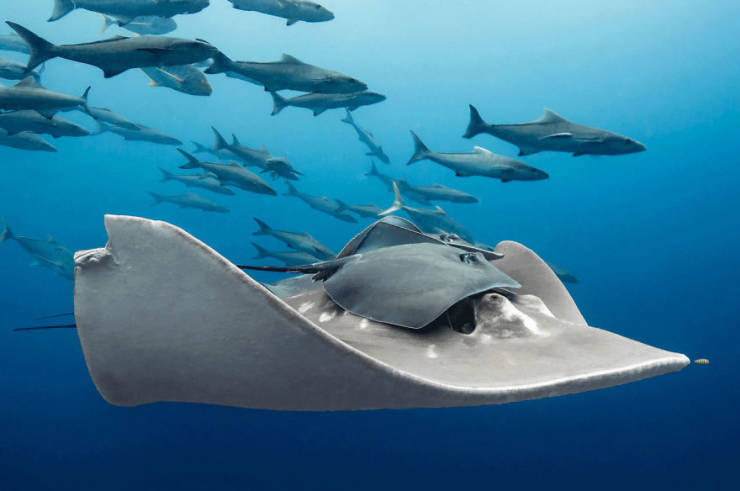 “Pink whip rays catching a ride on a small-eyed ray. The theory is that by doing this they seek protection from predators, save energy and also get leftovers from the big ray.This rare behavior was captured on the SS Yongala shipwreck, on the Great Barrier Reef off Ayr, in Queensland, Australia, and has been registered on the same dive site for around a decade, with different individual small-eyed rays… Could this be passing on through generations?” 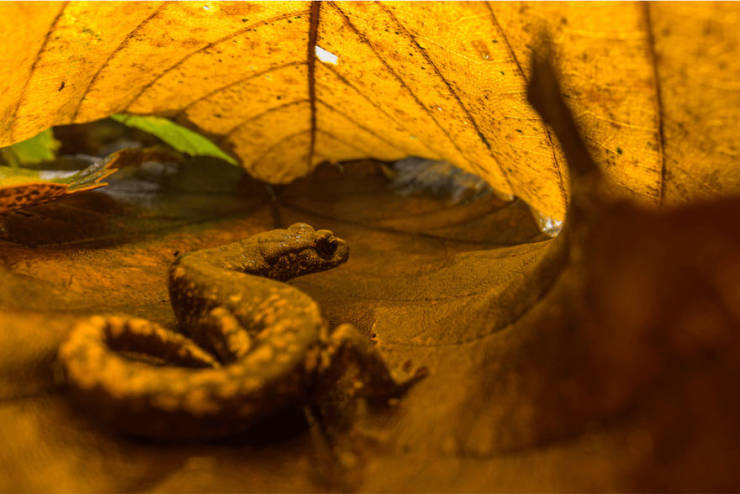 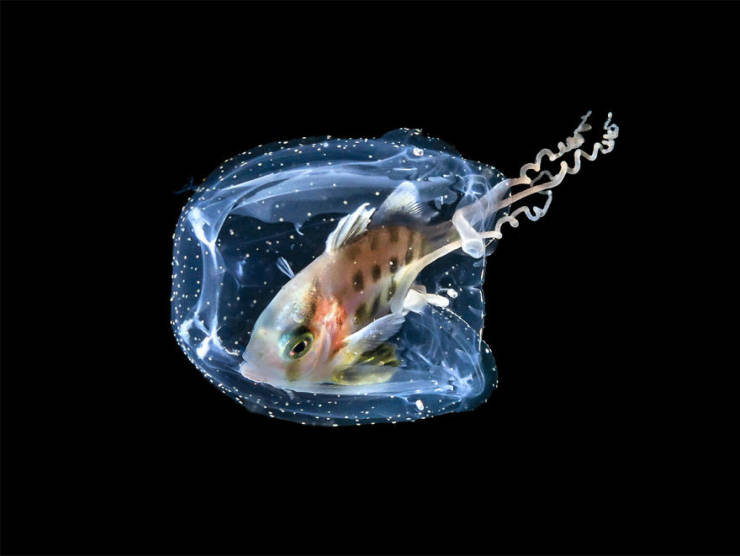 Human/Nature, Finalist: ‘The Man Of The Jungle 3’ By Thomas Vijayan 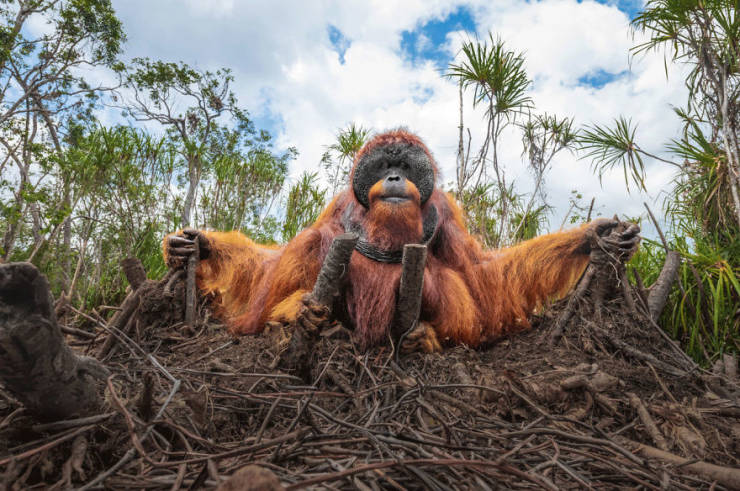 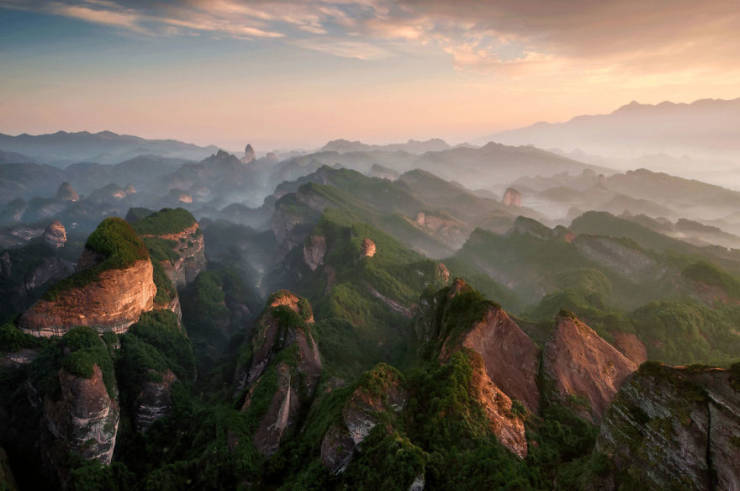 ” The Bajiaozhai National Forest Park is located in the resource county of Guangxi, China. It has a high terrain and complex terrain, so it has obvious mountain climate characteristics and typical Danxia landform. On that day, before dawn, we set off and climbed for more than an hour on the mountain roads to reach the top of the mountain until sunrise to take pictures” 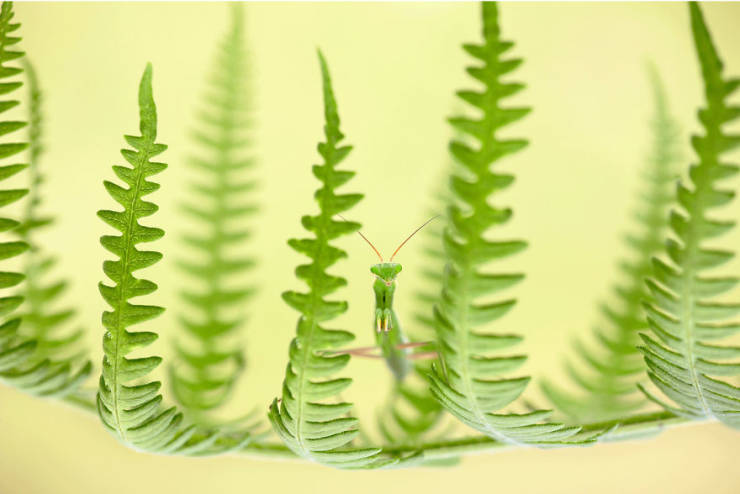 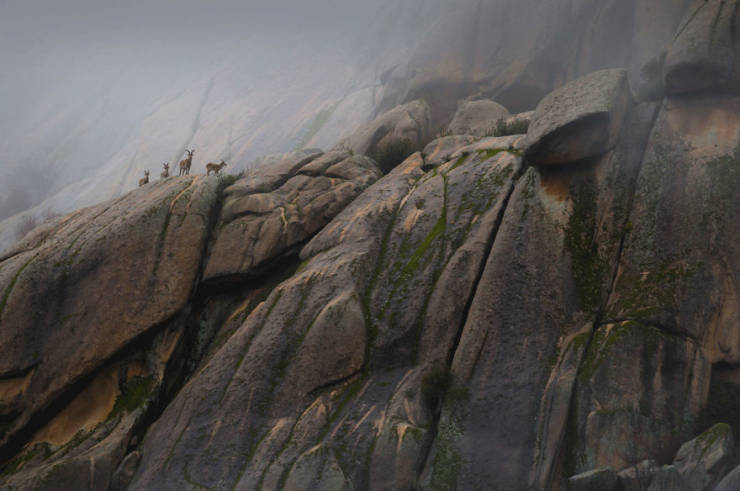 Terrestrial Wildlife, Finalist: ‘Hippopotamus Group From Above’ By Talib Almarri 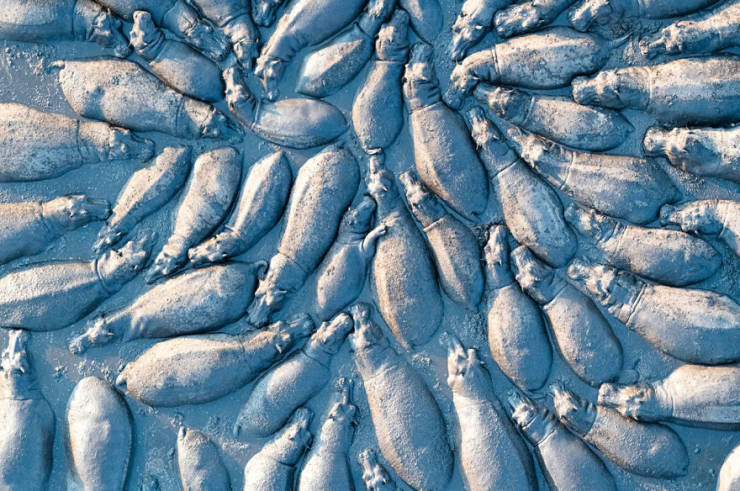 “Each winter, as the waters of Botswana’s Okavango River spread across its vast delta, an array of African wildlife congregates to eat, drink, splash, and soak. This seasonal wetland was especially important in 2019, when severe drought left human and animal populations alike desperate for water. Cattle, elephants, crocodiles, and other creatures were left to vie for any water they could find in the delta’s shrinking pools.

Among those seeking refuge were herds of hippopotamuses (Hippopotamus amphibious). These semi-aquatic herbivores are well-equipped for spending hours each day in the water—their nostrils and eyes located so high on their head that they can breathe and see while mostly submerged. They’re also graceful swimmers, and can hold their breath for up to five minutes. But even their aquatic abilities and impressive heft were no match for last year’s muddy, drought-stricken delta. At least 200 hippos became trapped in the mud, and managed to survive only because Botswana wildlife officials pumped in water to help them escape. As the climate warms, such droughts may become more frequent across much of Africa.” 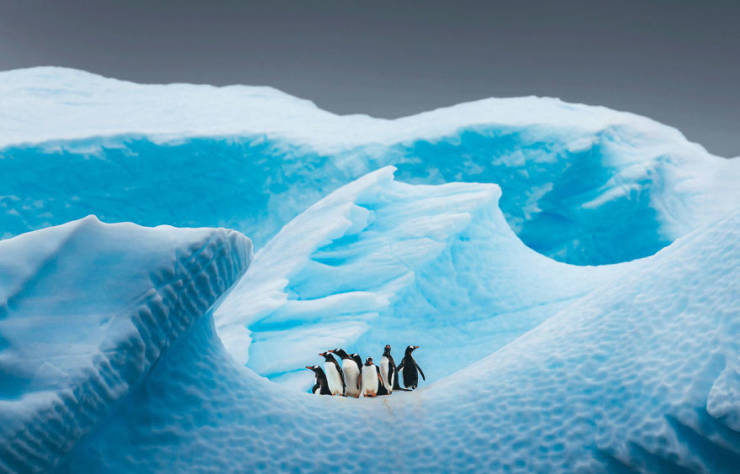 Landscapes, Waterscapes, And Flora, Finalist: ‘Lilies In The Sun’ By Henley Spiers 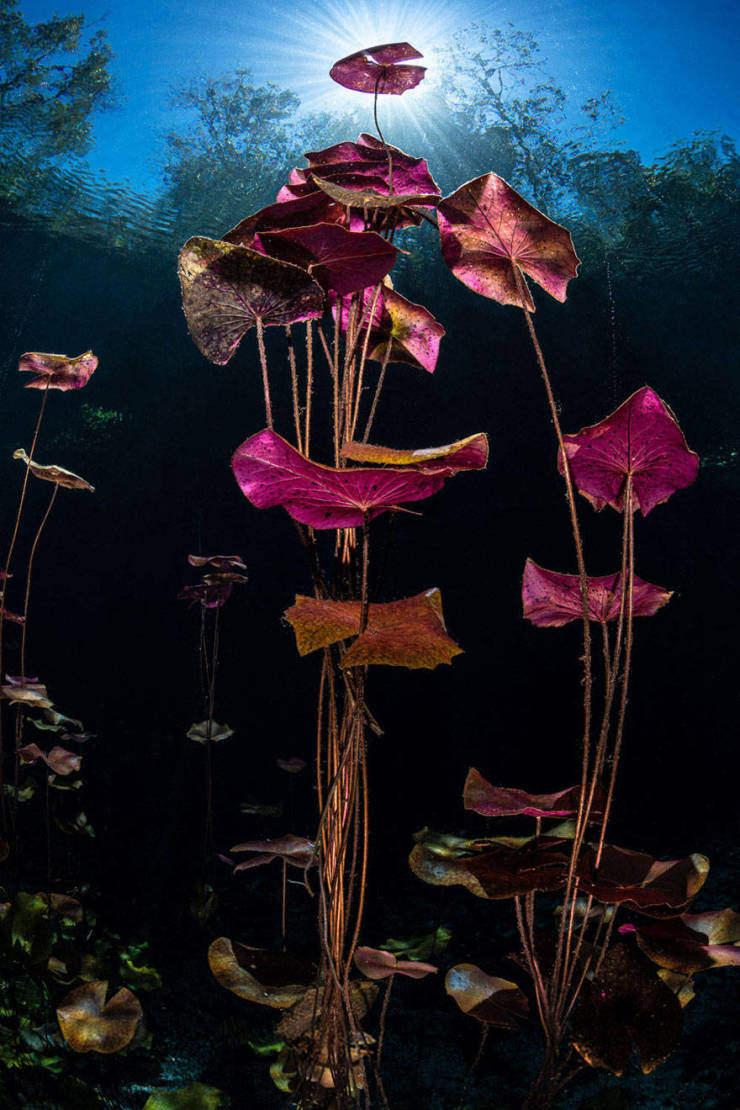 Art Of Nature, Finalist: ‘Lake Of Colors’ By Jes Stockhausen 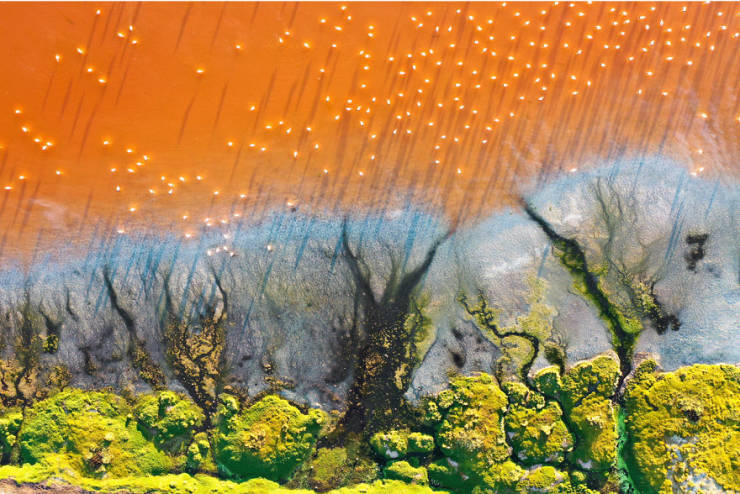 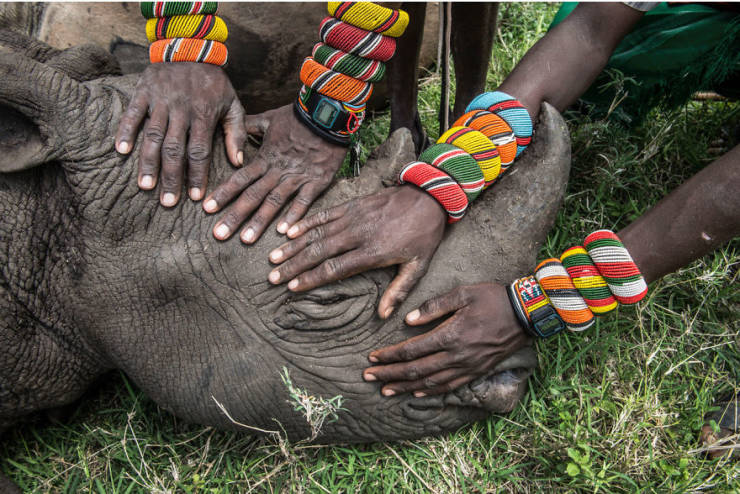 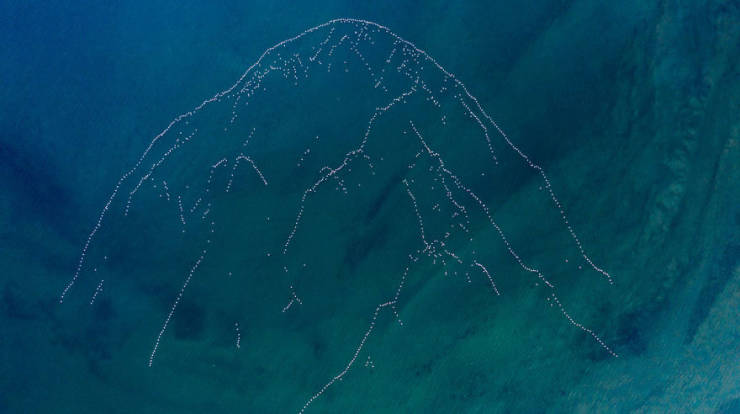 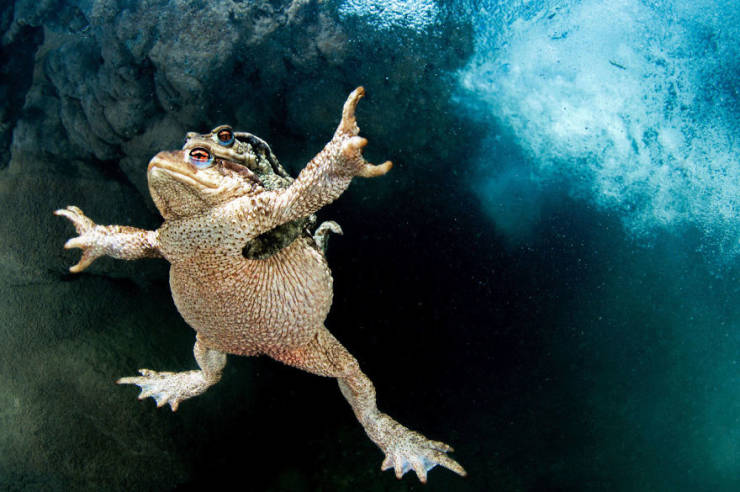 “Beneath the turbulence of a small waterfall in France’s Lez River, a male common toad (Bufo bufo) holds on for dear life. Not his own life, though—the male is helping to ensure his species’ survival by fertilizing his female companion’s eggs as she lays them. Known as amplexus—Latin for ‘embrace’—this mating behavior is common among amphibians and other animals whose eggs must be fertilized externally. Males temporarily develop glands on their toes, known as nuptial pads, to help them grip the swollen abdomens of the females. Then, as the female releases thousands of eggs in pearly, gelatinous strands, the male coats them with sperm.

Scores of toads seeking partners for this ancient dance of procreation are killed each spring by motor vehicles. Fortunately, some European communities have built canals and even enlisted toad-shuttling volunteers to help them cross roads and reach their mates.”