The Naughties Penguins In This New Zealand Aquarium

Employees of National Aquarium of New Zealand probably got tired of penguins acting out, so they decided to do a public pet shaming of said water birds. 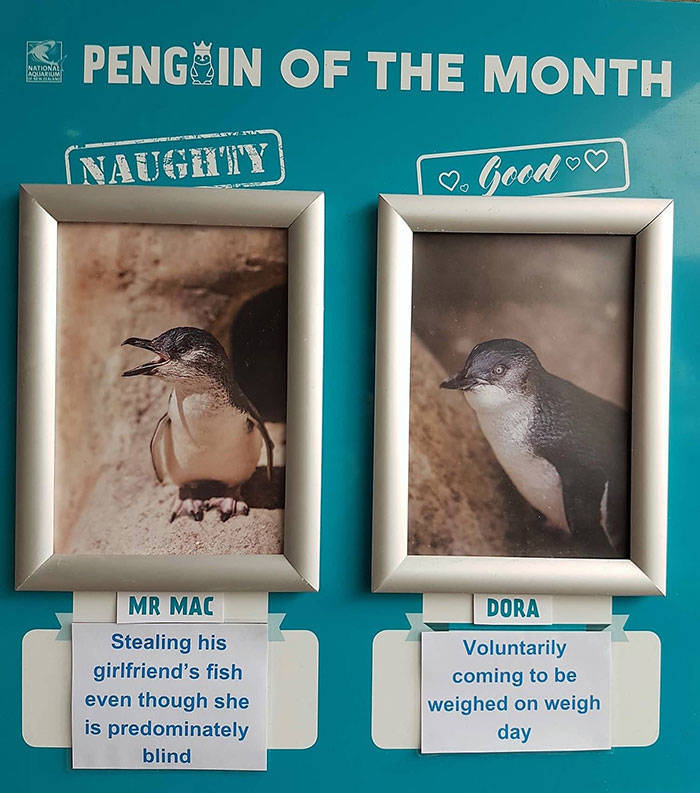 Dora was such a trooper at our regular health checks this month. She waddled straight over to the scales and, with a little helping hand and no fuss at all, popped up to be weighed. If only everybody was as compliant on weigh day as Dora!

Mr Mac takes the cake (or should we say fish) this month! Can you believe he snatched a fish right out of his girlfriend Lulu’s mouth? Taking food from an almost blind penguin – how could you Mr Mac!” 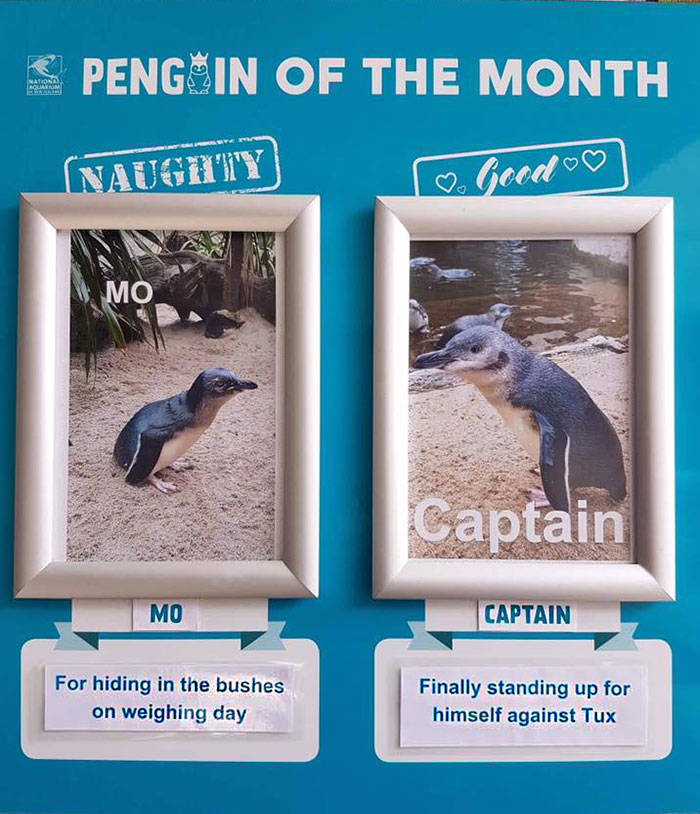 “Here we go everybody our Naughty and Good Penguins for the month of December!

Naughty Penguin- Mo… for hiding in the bushes on weighing day

Good Penguin – Captain…. Finally standing up for himself against Tux” 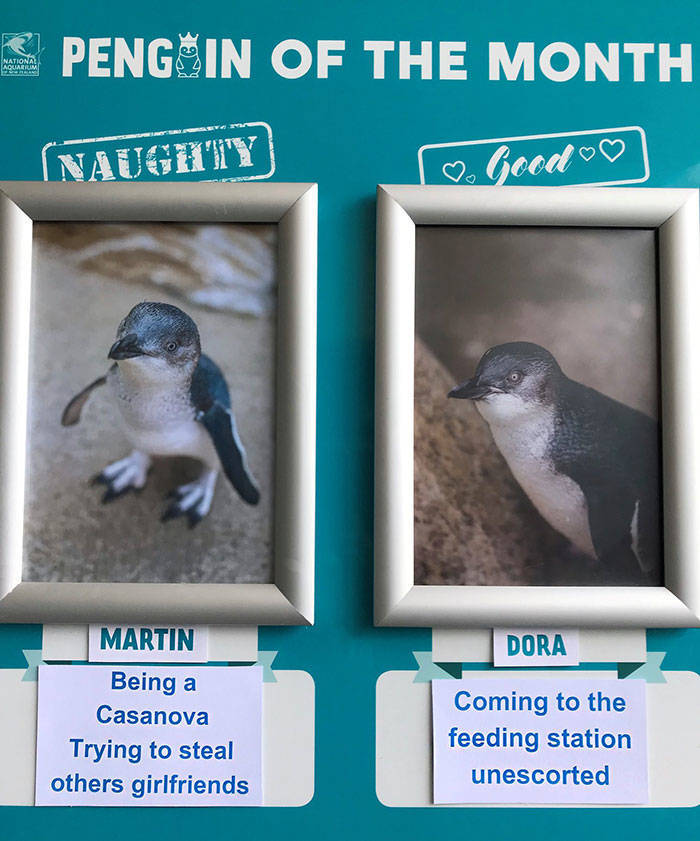 Martin is new to our Penguin Cove (rescued after a predator attack). While he was in our rehabilitation centre he was a bit of a grump (understandably). He’s settled in well, however has become a bit of Casanova – he started to muscle in on Lulu (Mr Mac’s girlfriend) and Draco (Timmy’s girlfriend). Timmy promptly put him in his place, Mr Mac is taking it all in his waddle. We’ve got some tough boys at Penguin Cove so keep your flippers to yourself Martin!

Dora used to be a bit of princess, demanding a guided escort to the feeding station. She’s now making a real effort, sauntering her own way over. Preferring to dine alone, she waits until the other penguins are done so she gets her keeper’s full attention.” 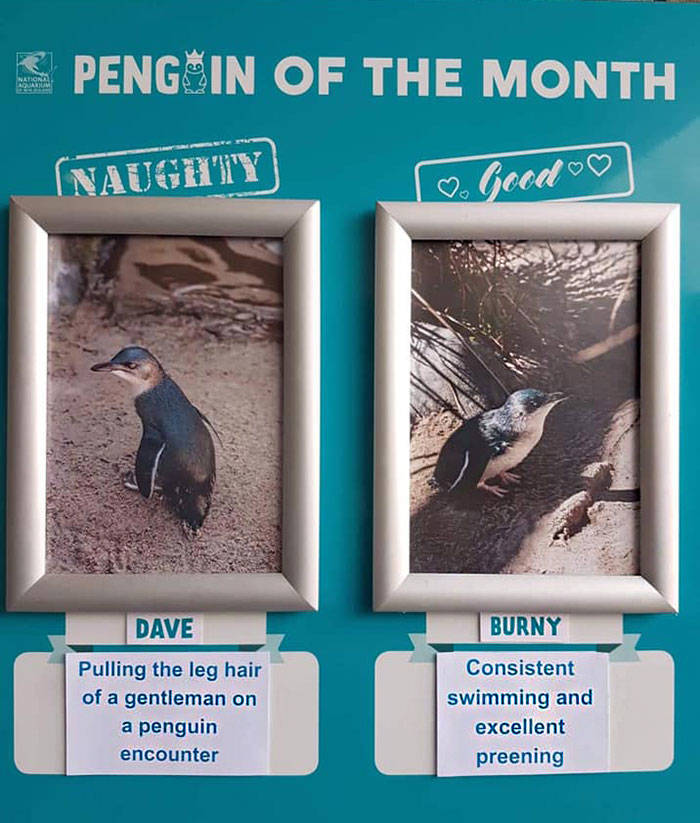 NAUGHTY (kind of!): Because Dave has been partially hand raised, he’s really close to humans and as part of penguin relationship building they like to preen each other. We had one recent gentleman who took part in a Penguin Encounter and had the privilege of Dave preening him. Dave’s very young and doesn’t know his own strength so a few hairs were tugged at on his legs – but our guest thought this was pretty special.

GOOD: Before moulting Burny had been spending a lot of time in her burrow. Now with some lovely new feathers, she’s been taking care of them really well!! She’s spending all day in the water and making a conscious effort to preen and keep them in good condition. Nice work Burny.” 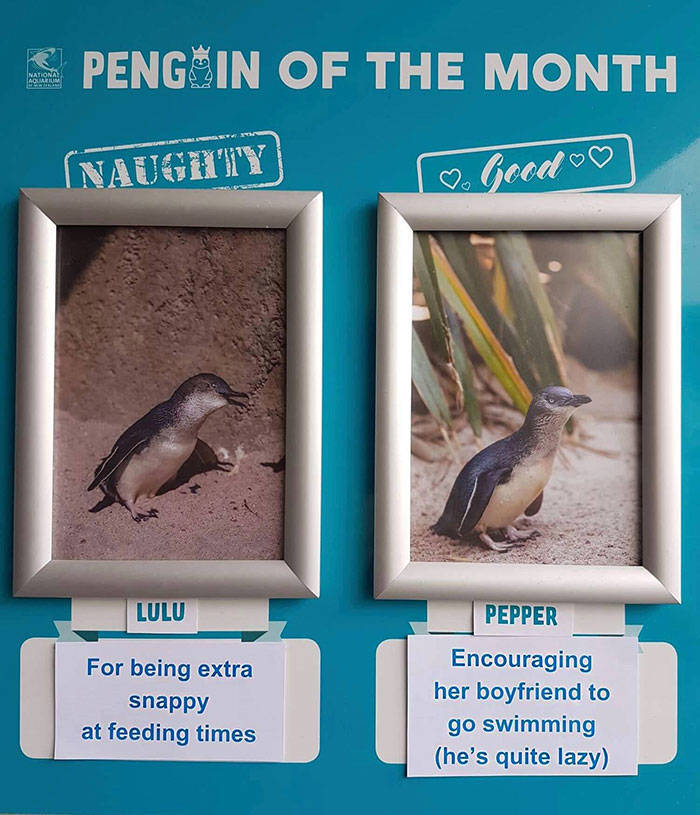 ” PENGUIN OF THE MONTH – FEBRUARY

It’s a mother/daughter duo this month!

Good Penguin of the Month – Pepper

She’s been so good at encouraging her boyfriend Tux to go swimming. Tux can be a bit lazy! Good on you Pepper

Naughty Penguin of the Month – Lulu

Our Lulu has been extra snappy over the last few weeks at feeding time. She obviously needs to learn some good habits off her daughter Pepper!” 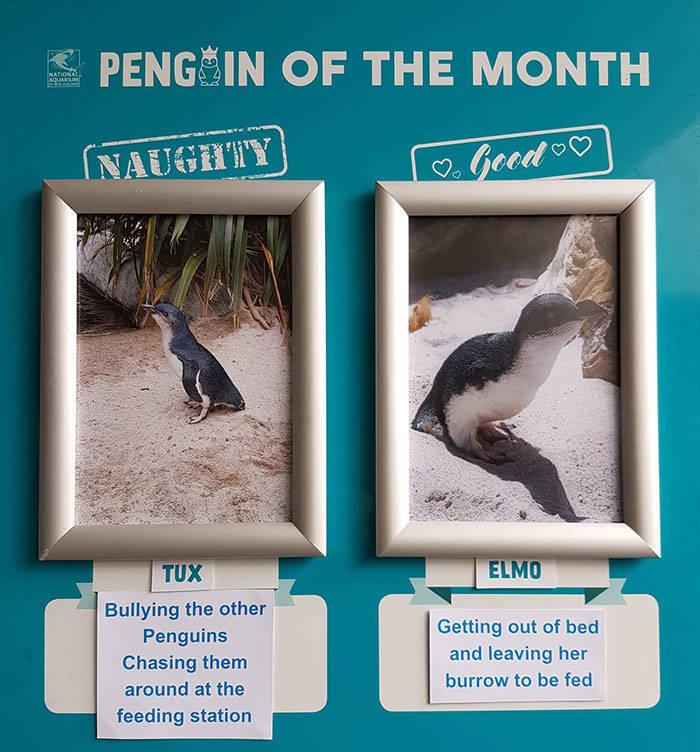 ” PENGUIN OF THE MONTH TIME!

Elmo, our oldest resident, has been waddling out of her burrow to eat. This is a fantastic effort as we usually provide her with room service. She’s missing a flipper (after getting caught in fishing line when in the wild), is rather elderly at 19 years old (a penguins life span in the wild is about 10 years old) and she has cataracts. We <3 you Elmo.

Tux has been a right bully lately and has been chasing other penguins around at the feeding station. It’s breeding season, and as his burrow is near the feeding station he’s claimed this area as his territory as well, talk about attitude! Tux does have occasional bullying tendencies and has been in trouble before for pushing Timmy off the pier. He’s a handsome dude, but that’s no excuse – we’ll need to keep an eye on him. ” 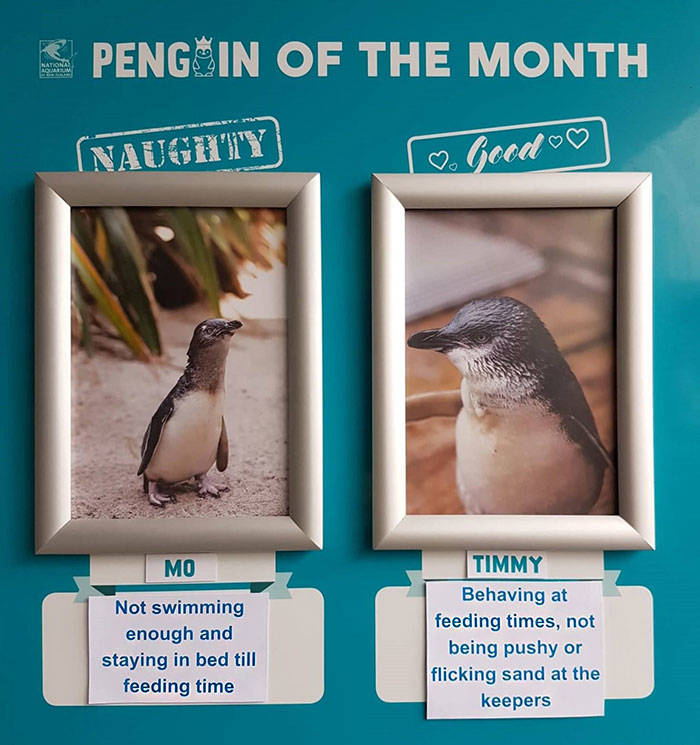 Mo has been a lay-about over the last few weeks! Has sleep ins, and doesn’t get out of bed until feeding time. Penguins normally swim during daylight hours, usually getting up at sunrise. But not our Mo – he refuses to rise before 9.30am, then waddles across to get his food and tries going back to bed. Mo needs to be mindful of his tardy behaviour.

Timmy’s actually behaving at feeding time! Yes, we were impressed too. He’s not being his usual pushy self and has even restrained himself from flicking sand at the keepers! Basically, he’s been awarded good penguin this month because he hasn’t been naughty LOL! Nice one Timmy.” 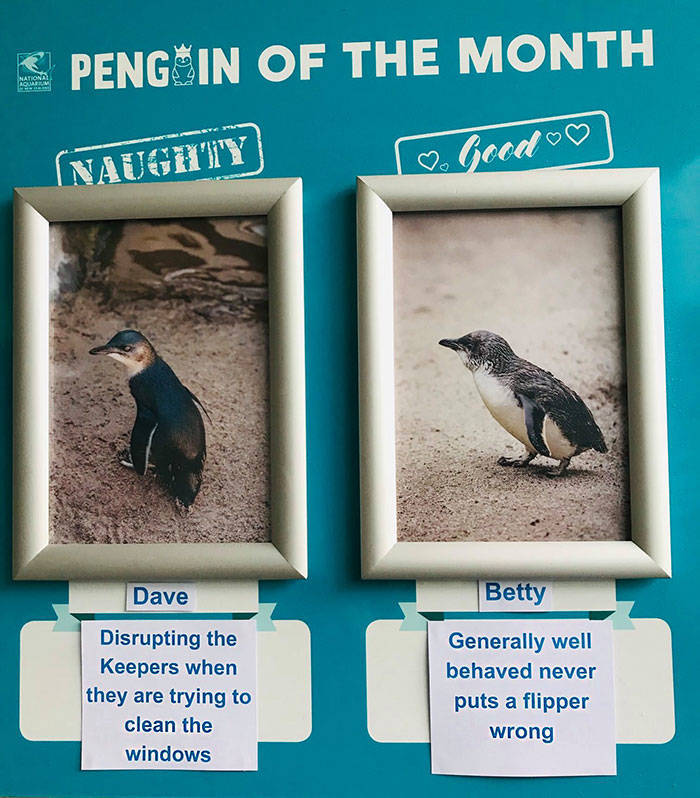 Dave just can’t get it together and stay off the naughty list! We take great pride in keeping Penguin Cove clean and tidy. However for Dave this is an opportunity to cause mischief, and as cute as he is, it tends to make this job tricky for our keepers. We’re going to see if we can get some video evidence of him in action so watch this space!

Our Betty is one of our sweetest penguins and is such a joy! She never lets the hustle and bustle of the other penguins get to her. She goes about her day without putting a flipper wrong. Maybe she’s starting to be a good influence on her boyfriend Mo – who hasn’t been on the naughty list for some time!” 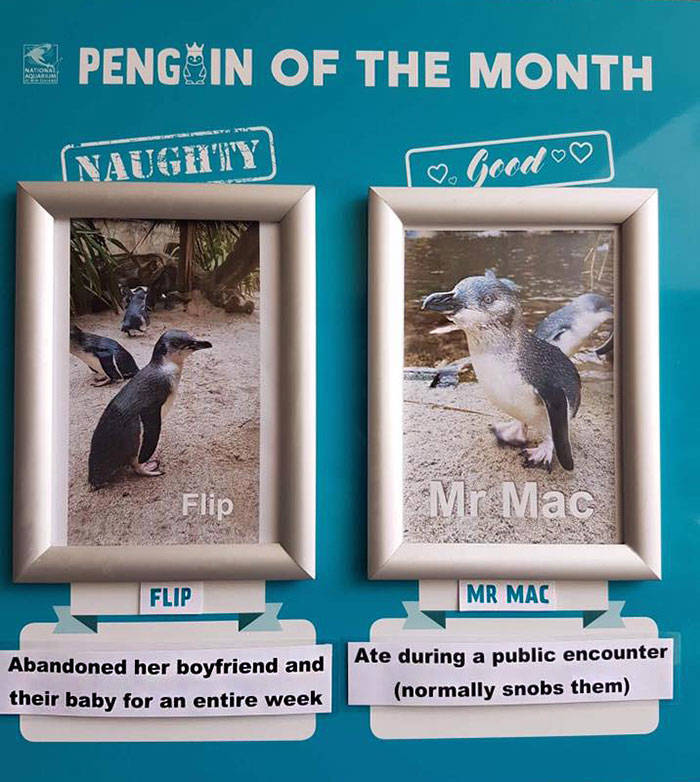 “Here we go *Penguin of the Month*

Naughty Penguin – Flip abandoned her boyfriend and their baby for an entire week!!!!!