The Tumbest Exam Answers Ever Seen

Look, most exams and tests aren’t easy by design, but there are bad answers, and beyond that, dumb as hell answers.

We’re here to take a look at the latter option, told (mostly) by the teachers that had to stare in disbelief at what they were grading.

Just the other day, the question asked the learners to explain the myth in the passage.

Answer? A myth is a female moth.

And I just sort of looked at this answer for a while before realising the extent of stupid answers.

I am in a 1-to-1 school (every student is issued an iPad), so I use a digital quiz that my students can type on.

I can’t remember what the question was, but I remember the student’s answer.

It was a pizza emoji.

My mum was a teacher, she was doing a geography quiz with year 7/8’s (6/7th grade) one of the question’s was “What was the biggest island until Australia was discovered” one kid answered “Trick question, Australia isn’t real”.

My dad once told me about one of his students complaining she missed a point because the topic of the question wasn’t covered in class. The question? “Can you get pregnant from a handshake?”

He was teaching freshmen med students…

Not an answer, but they raised their hand to ask a question. The hand with all the answers written on it.

Obligatory not a teacher, but before I had my history teacher (who liked to put funny answers on tests that were clearly wrong), she had put ‘Apu Nahasapeemapetilon’ among historical Babylonian figures on a test, and people actually picked the answer unironically.

Not a teacher. One time I didn’t study at all for a test. I left almost all the answers blank. The very last question was the only one I got marks for. The question was “What is a haiku? Please define and provide an example.” My haiku was:

My teacher wrote “for sure!” and I got full marks. I studied for the rest of the tests that year.

Not on an exam, but an answer in class:

Asked the class what is dangerous about a nuclear reactor exploding near a populated area. Kid’s hand shoots up and I call on him:

Is it because it makes sandwiches?

All the other kids turn around and stare at him. I ask him to clarify and he sheepishly says ‘I dunno, Sir… for a second I just thought that was the answer…’

College English professor here, though the dumbest exam answer I ever saw came from one of my fellow TAs in a huge lecture hall film class back when I was still a grad student.

For some unfathomable reason one of his students decided to answer the written final exam in the form of a poem that didn’t begin to answer any of the exam questions nor did it reference any of the movies we watched in class (which you had to pick from for the answers) but instead just threw in references to whatever random movies he could work into his rhyme scheme, and even setting all that aside, this student still had zero talent for poetry.

I don’t know what the hell he was thinking but my friend decided to generously give the student a 20% for bothering to show up and at least write something down.

Not a teacher, but my friend drew a picture of Dwayne ‘The Rock’ Johnson as art homework when we were meant to be sketching rocks

Victor Frankenstein and Hamlet are both characters created by William Shakespeare. Happened 10 years ago. I’m still shaking my head. 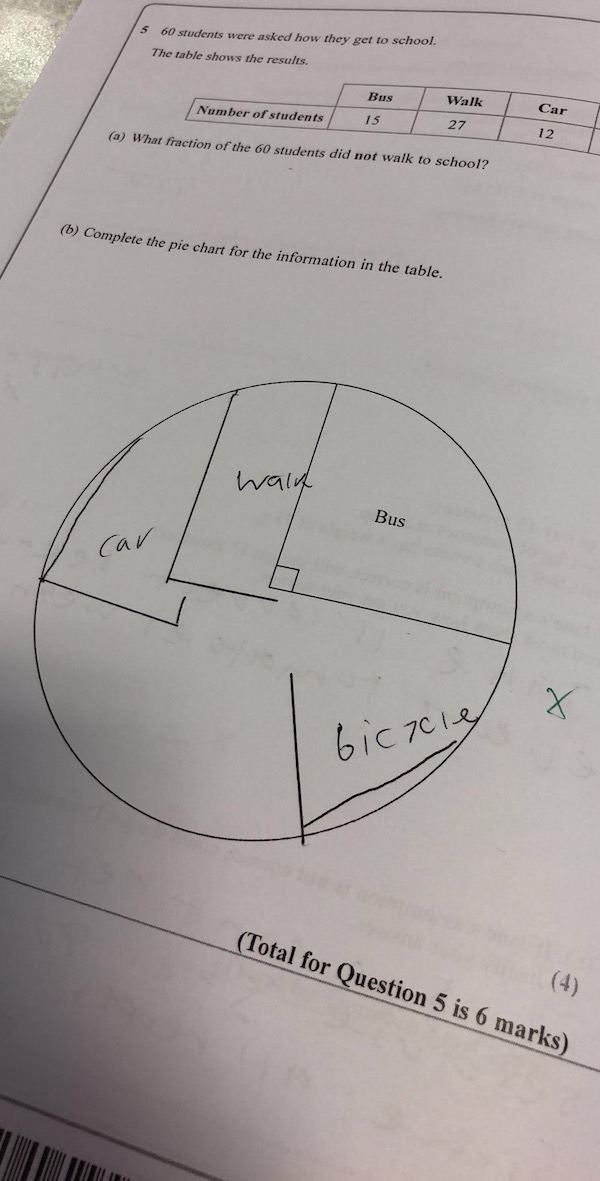 Maths teacher here. The worst I’ve ever had was from a 16 year old who was asked to draw a pie chart.

Previous Barnorama Morning Picdump 46 (Pics)
Next Why This Is So Damn Sexy?!