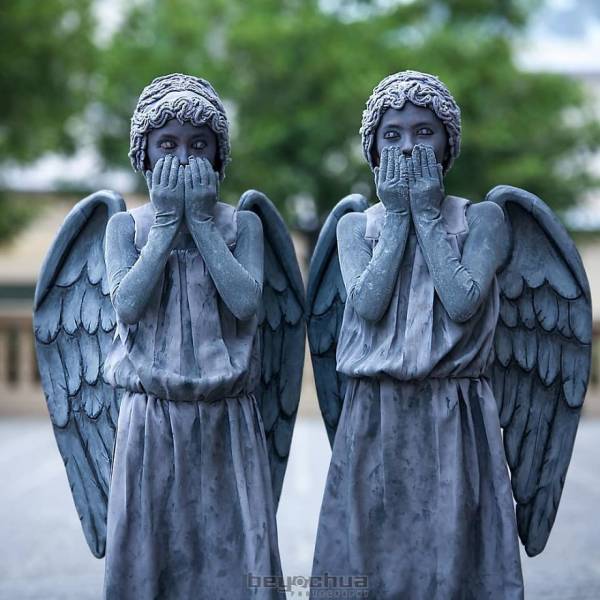 The Weeping Angels are a race of predatory creatures from the long-running sci-fi series Doctor Who, resembling stone statues. The Weeping Angels were an extremely powerful species of quantum-locked humanoids (sufficient observation changes the thing being observed), so called because their unique nature necessitated that they often covered their faces with their hands to prevent trapping each other in petrified form for eternity by looking at one another. This gave the Weeping Angels their distinct “weeping” appearance.

They were known for being “kind” murderous psychopaths, eradicating their victims “mercifully” by dropping them into the past and letting them live out their full lives, just in a different time period. This, in turn, allowed them to live off the remaining time energy of the victim’s life. However, when this potential energy paled in comparison to an alternative power source to feed on, the Angels were known to kill by other means, such as snapping their victims’ necks. 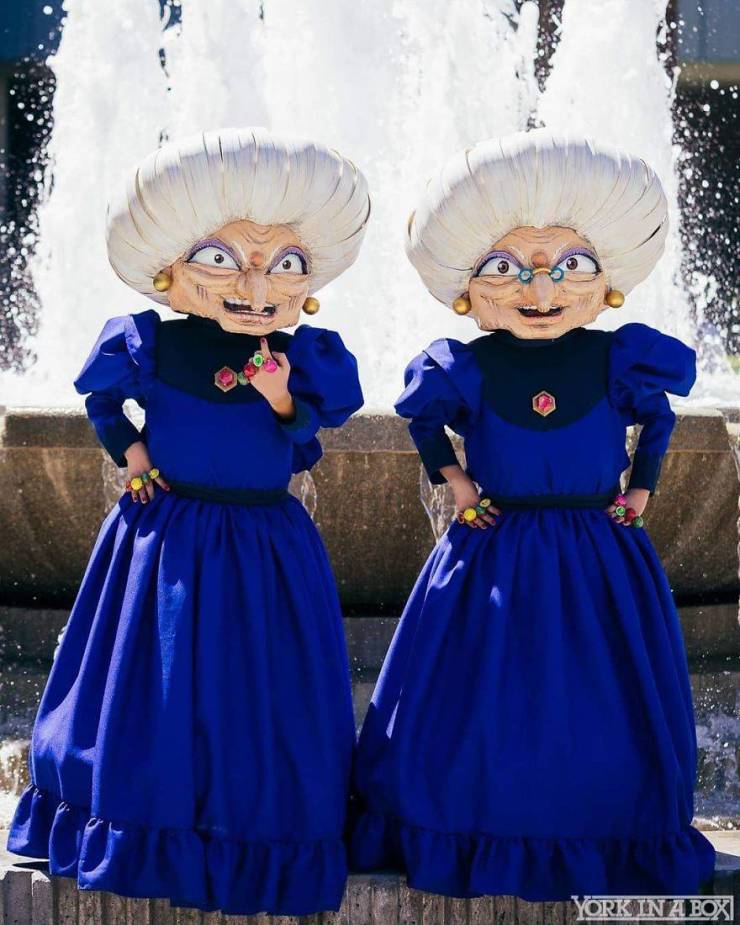 Yubaba and Zeniba are twin witch sisters in the film Spirited Away directed by Hayao Miyazaki of Studio Ghibli.

As the main antagonist of the film, Yubaba has an extremely overbearing and intimidating personality. Like many other workers of her infamous bathhouse, Yubaba obsesses greedily over gold and is shown to be willing to view gold as a priority over her own family (especially Zeniba, whom she expresses hatred for).

The Sisters (Kubo And The Two Strings) 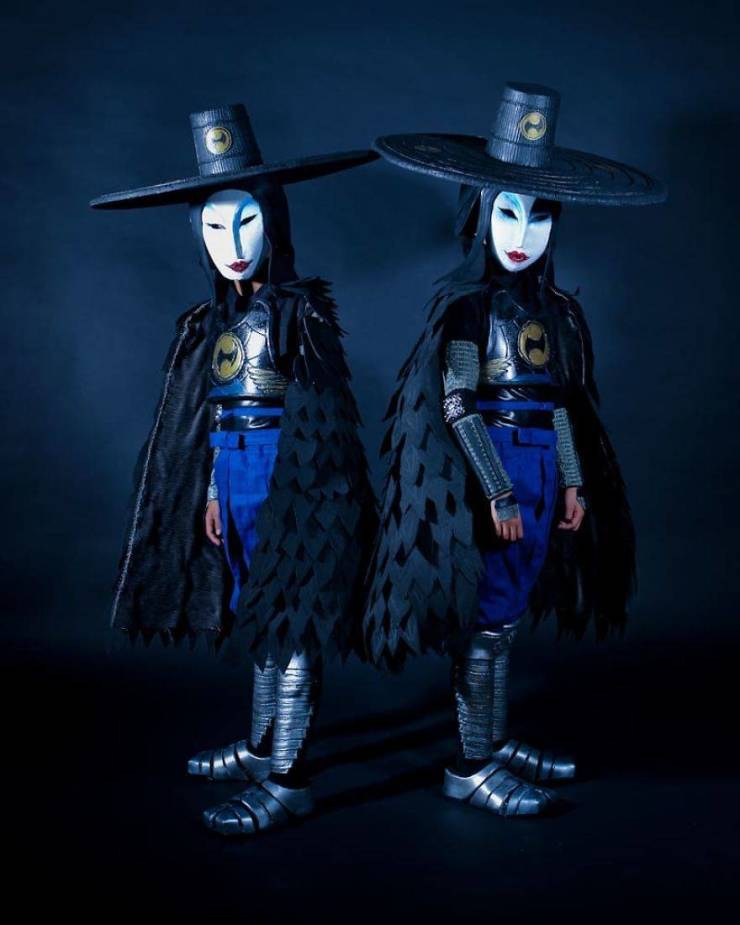 The Sisters, are the secondary antagonists in the film, “Kubo and the Two Strings”.

These spectral twins are both the Moon King’s daughters and his most powerful and ruthless assassins. They are the sisters of Kubo’s mother but have never treated family above themselves, only when obeying their father. Identical in voice and appearance down to their chilling Noh masks painted with a frozen smile, the Sisters are in charge of dispelling their father’s worries and hunting down his enemies. They do not need to eat, nor to sleep, and they shall not let anything stand in the way of them capturing Kubo and fulfilling the wishes of their father. 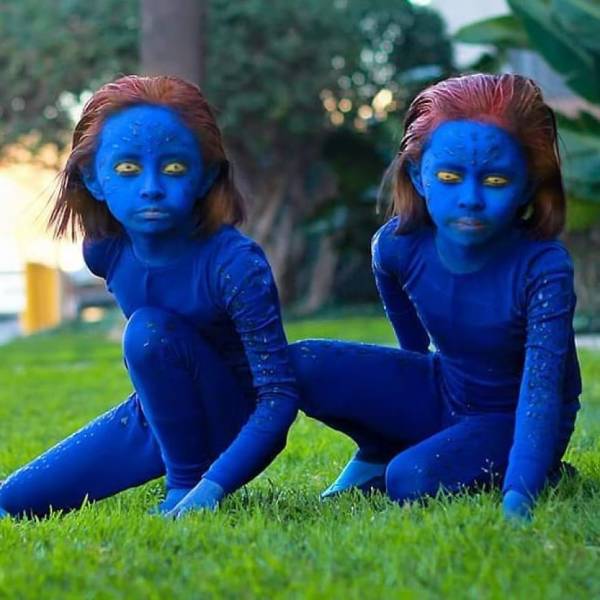 Mystique (Raven Darkhölme) is a fictional character appearing in American comic books published by Marvel Comics, commonly in association with the X-Men.

Mystique is a shapeshifter who can mimic the appearance and voice of any person with exquisite precision, and her natural appearance includes blue skin and yellow eyes. She is typically portrayed as a foe of the X-Men. 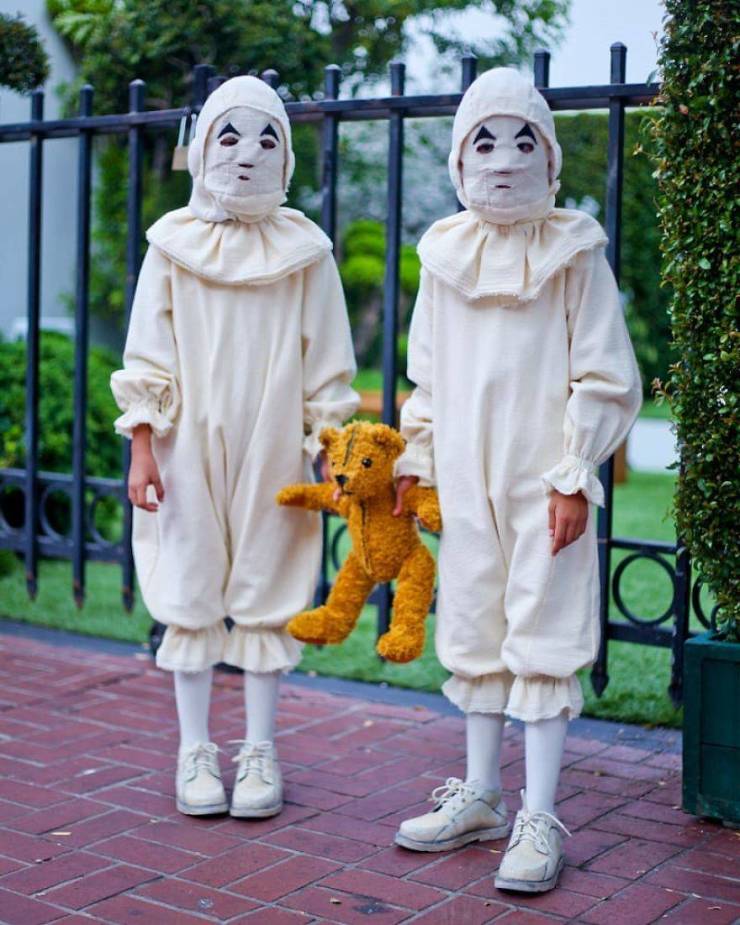 The Twins are two peculiar children dressed in rather odd costumes that could be mistaken for make-up if not looked at closely. They have two pictures in the book, and judging by the sepia of the photo, this photo originated from either Britain, or was taken sometime after or near the end of the Victorian age. The have a brief appearance in the first book when Jacob says, “Where are we going?” to The Twins on page 174. They don’t appear again. 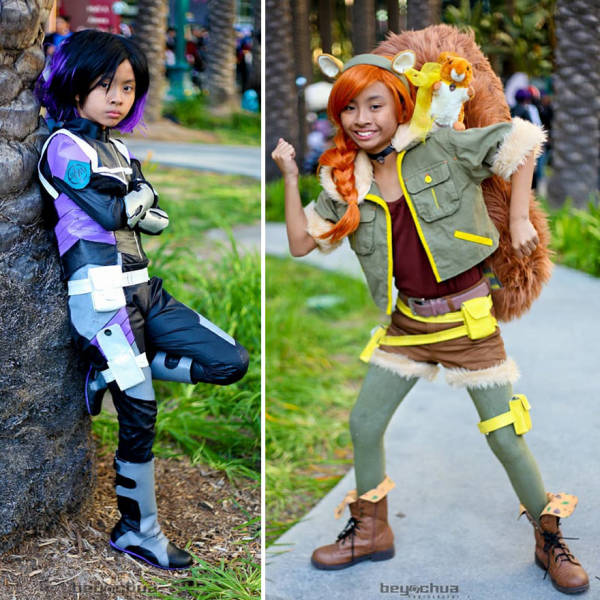 Daisy Johnson is a main character in Marvel Rising: Secret Warriors. She is also known as Quake. Daisy Johnson was a top agent for shield. She gained powers after the terrigen wave hit and kept them a secret, claiming that her powers where from the gauntlets she wore.

Doreen Green is a main character in Marvel Rising: Secret Warriors. She is also known as Squirrel Girl. Doreen Green was born to her parents, Dor and Maureen Green, with a squirrel tail and claws. When she was ten years old, she discovered that she could talk to squirrels. 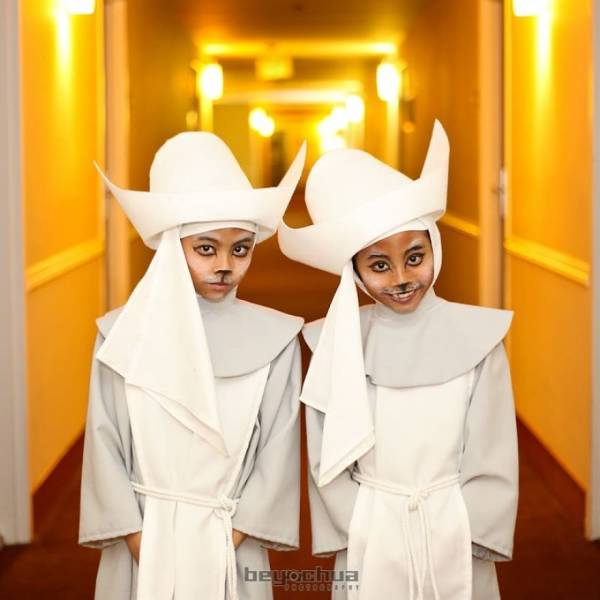 The Sisters of Plenitude were an order of Catkind nuns, devoted to helping the sick.

One order of the Sisters had a hospital on New Earth, outside of New New York. This hospital was created by the Sisters of Plenitude to deal with all human diseases. They had cures for nearly every known ailment and were able to heal their patients with remarkable efficiency. Many of the treatments shouldn’t have been discovered for at least a thousand years, according to the Tenth Doctor.

These amazing skills were gained by using thousands and thousands of grown human clones. They were infected with every known disease, and later euthanised when too dangerously ill. This was done because other, more humane methods were too slow to deal with all the diseases. 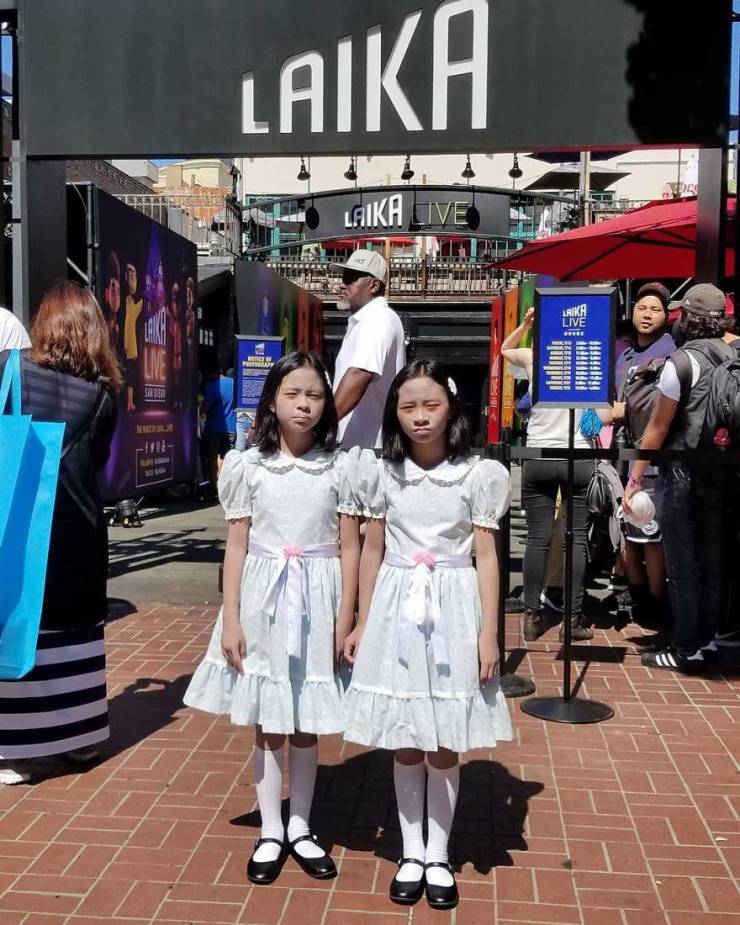 Grady’s Daughters refer to the two girls in blue Danny Torrance sees while riding in the Overlook Hotel’s West Wing.

Speculation is that the girls are not twins. While they mirror each other, remember that anachronistically, a lot of families dressed their offspring in similar, matching fashions. Also, their dresses are designed to be different and one is up higher than the other. One also appears to be slightly taller. While Stanley Kubrick may have cast a real set of twins (Lisa and Louise Burns) in the role, note that they have been intentionally made to look differently.
Captain Phasma And Kylo Ren 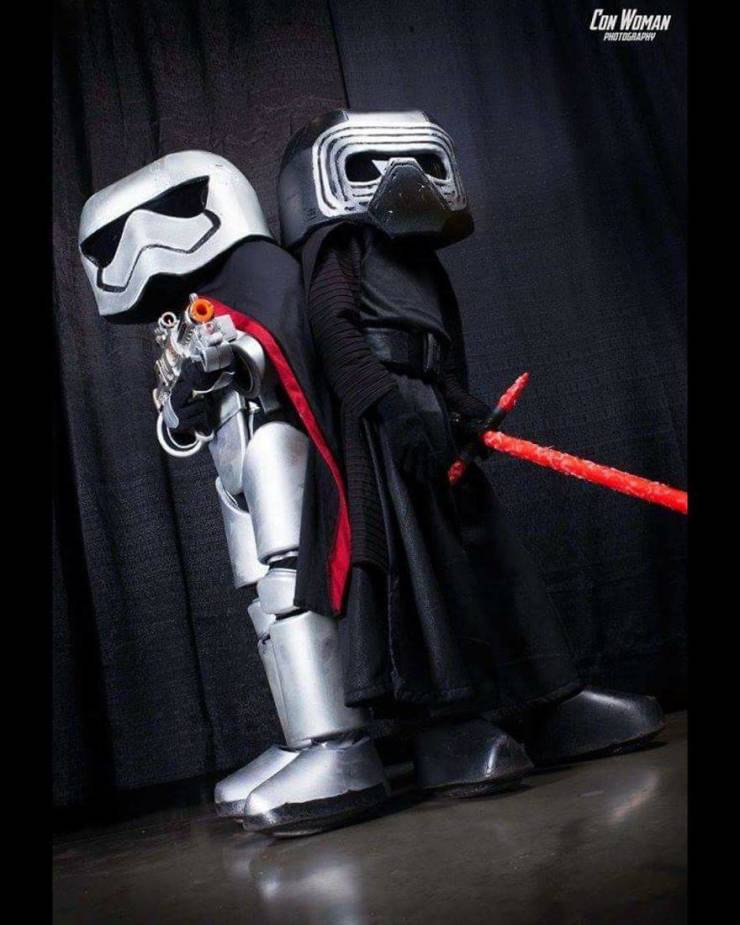 Captain Phasma is a fictional character in the Star Wars franchise, portrayed by English actress Gwendoline Christie. Introduced in Star Wars: The Force Awakens (2015), the first film in the Star Wars sequel trilogy, Phasma is the commander of the First Order’s force of stormtroopers.

Kylo Ren, a Force-sensitive human male, was the Supreme Leader of the First Order and master of the Knights of Ren during the New Republic Era. Once a promising student of Jedi Master Luke Skywalker, the former Ben Solo was neither Jedi or Sith but a product of both philosophies. 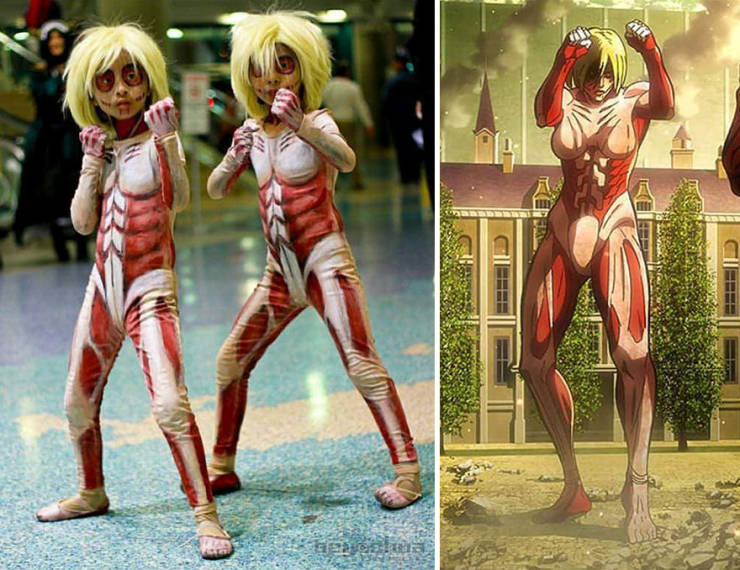 Annie Leonhart is a graduate of the 104th Training Corps and former member of the Military Police Brigade. Her exceptional skill with swords and unarmed combat earned her the 4th rank, but she is noted to be a lone wolf that struggles to work with others.

She possesses the ability to transform into a Titan known as the Female Titan. Trained from an early age by her father, she is selected as one of Marley’s Warriors. As the Female Titan, she serves as a major antagonist prior to her defeat, in which she crystallizes herself and is left in a comatose state. She is currently being held deep underground under the custody of the Survey Corps. 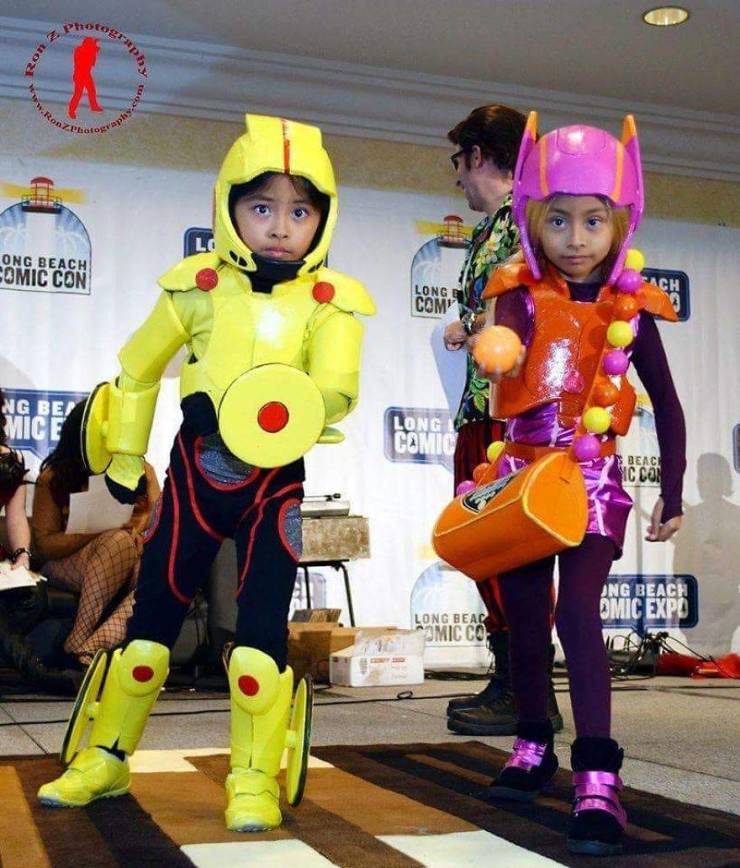 Go Go Tomago is a major character from Disney’s 2014 animated feature film, Big Hero 6. She is a member of the superhero team Big Hero 6. Not much is known about Go Go’s early life, but it can be assumed that she’s had a passion for speed and its vehicular applications since before she began attending San Fransokyo Institute of Technology, where she majors in Mechanical Engineering and Industrial Design. Go Go is an accomplished racer; ever since she was a child, Go Go has had a passion for racing, having won several races (including getting placed twice in the San Fransokyo Criterium). She enrolled at City Honors Academy during her high school years and eventually found her way to the university that she attends in the present day.

Honey Lemon is a major character from Disney’s 2014 animated feature film, Big Hero 6. She is a bubbly and optimistic chemical engineering student at the San Fransokyo Institute of Technology, and a member of Big Hero 6. Honey Lemon lives in the city of San Fransokyo, but has Latin American roots. A lover of science, and particularly chemistry, Honey Lemon discovered her love for chemistry while in high school. She notes that she also fell in love with a foreign exchange student named Andre during her high school years (whom she still harbors affections for). 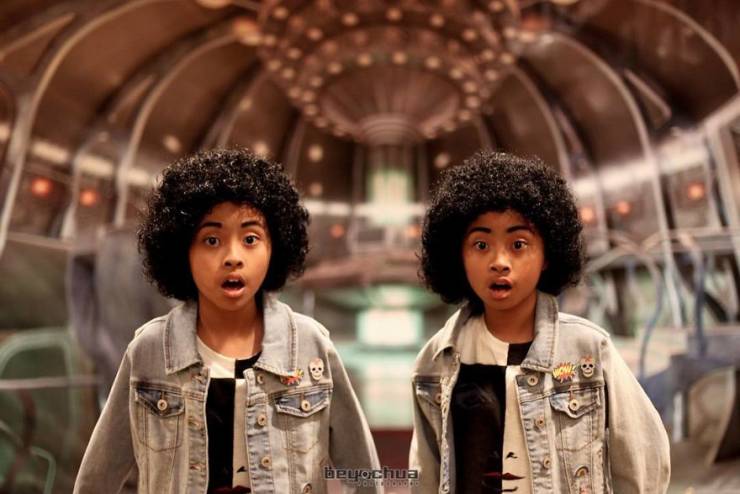 Bill Potts was the final companion of the Twelfth Doctor. She shared a teacher-student relationship with him similar to that of Leela and Gabby Gonzalez, albeit on more official circumstances.

When she first encountered the Doctor, Bill was working as a canteen assistant at St Luke’s University, seemingly destined for an unprivileged life. When free from work, she attended some of the Doctor’s lectures at the university. The Doctor saw her unfulfilled potential and invited her for a series of personal tutoring sessions. 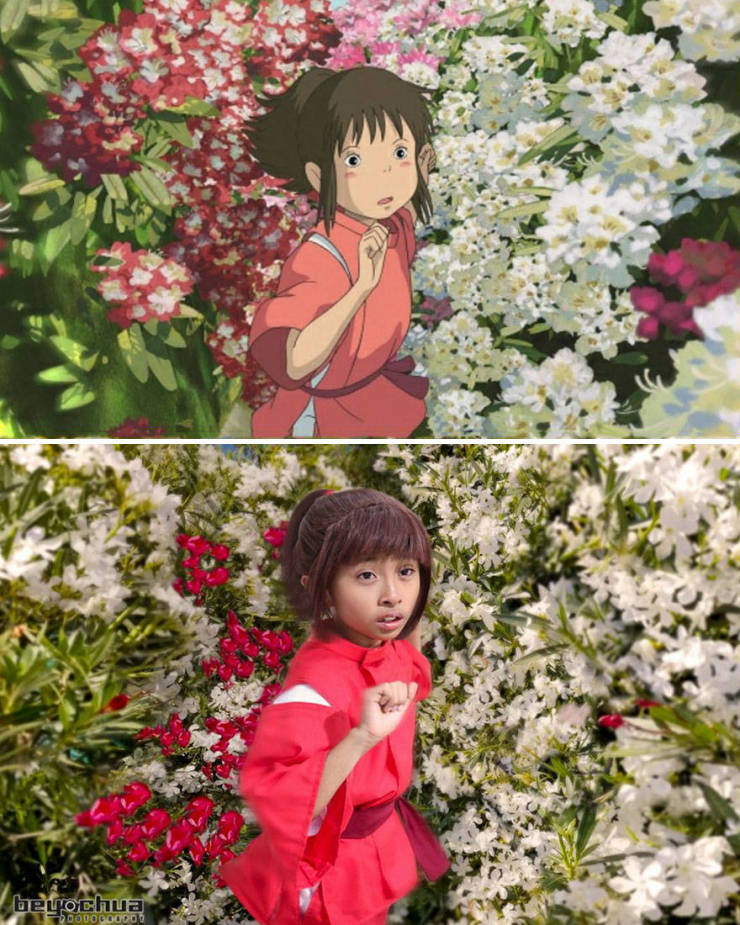 Chihiro Ogino, referred throughout most of the film by her nickname Sen (Sen, lit. “one-thousand”) is the ten-year-old core protagonist of the Japanese animated film Spirited Away.

Chihiro’s growth into a capable individual is a core factor to the movement of Spirited Away’s plot. During her adventure in the Spirit World, she matures from an easily-scared girl with a child-like personality to match her age to a hard-working, responsible, and brave young girl who has learned to put her fears aside for those she cares for. 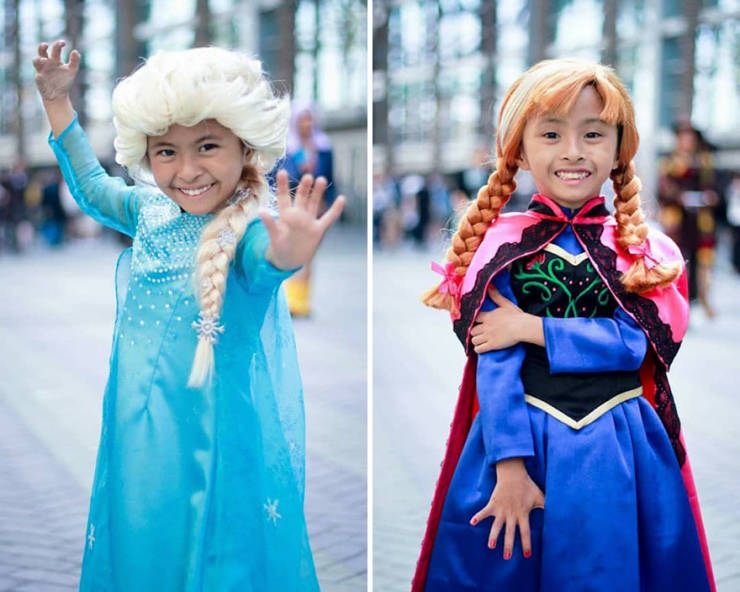 Elsa is the daughter of Agnarr and Iduna, older sister of Anna, and queen of Arendelle. Elsa was born with the powers to manipulate ice and snow and used them to entertain her sister. However, Elsa’s lack of control resulted in her living in fear of hurting anyone with her powers, and she spent much of her early life shut out from the world. Though it pained her greatly to do so, Elsa also saw it necessary to distance herself from Anna, so there would be no risk of hurting her.

During the long years that followed, Anna tried repeatedly to spend time with Elsa but to no avail. This isolated existence was made complete by the sudden deaths of Agnarr and Iduna, leaving Anna to truly fend for herself. 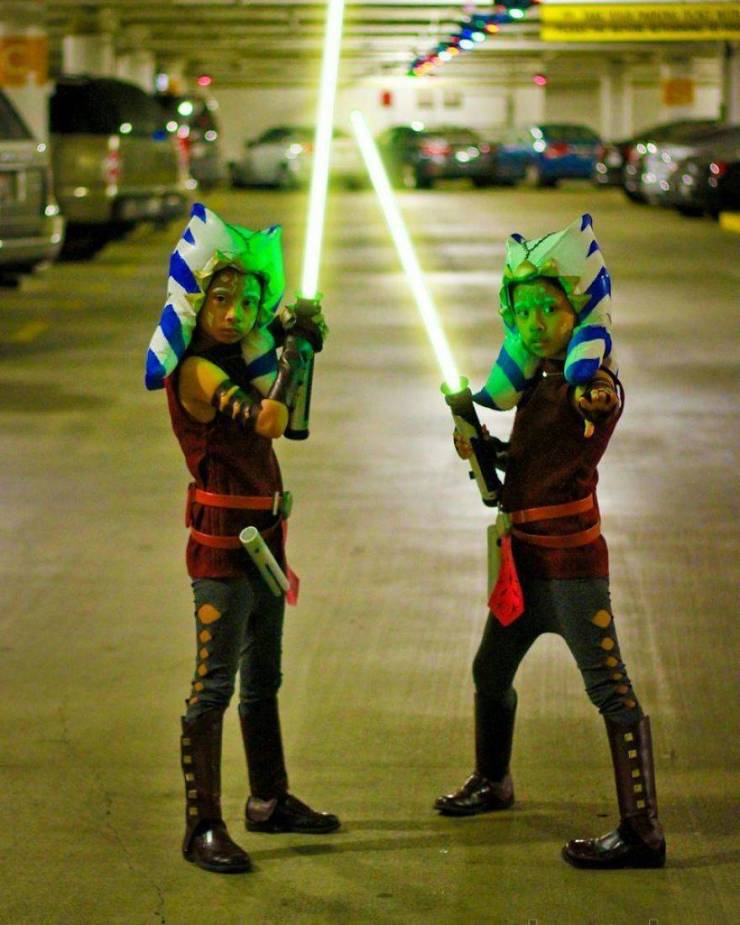 Ahsoka Tano, nicknamed “Snips” by her Master and known as “Ashla” after the Clone Wars, was a Jedi Padawan who, after the conflict, helped establish a network of various rebel cells against the Galactic Empire. A Togruta female, Tano was discovered on her homeworld of Shili by Jedi Master Plo Koon, who brought her to the Jedi Temple on Coruscant to receive Jedi training. 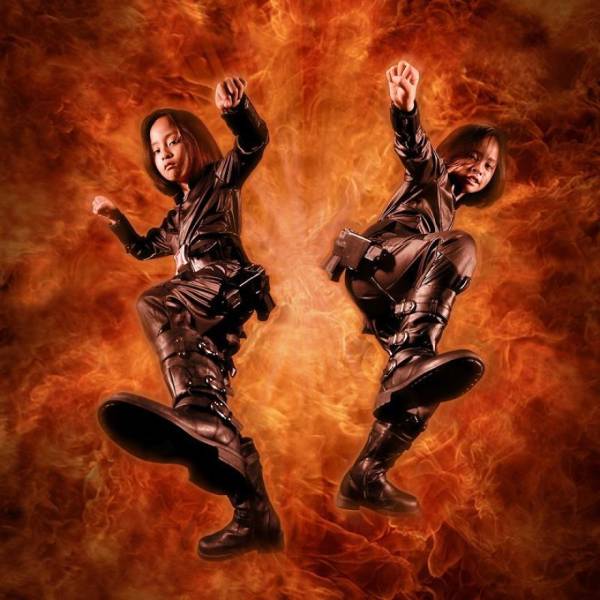 Natalia Alianovna “Natasha” Romanoff, also known as Black Widow, was one of the most talented spies and assassins in the entire world and a founding member of the Avengers. Originally an agent of the Soviet agency for foreign intelligence, the KGB, she later became a member of S.H.I.E.L.D., the international counter-intelligence agency. Having extensive mastery in martial arts and armed with her Widow’s Bite, Black Widow became one of S.H.I.E.L.D.’s most efficient agents. 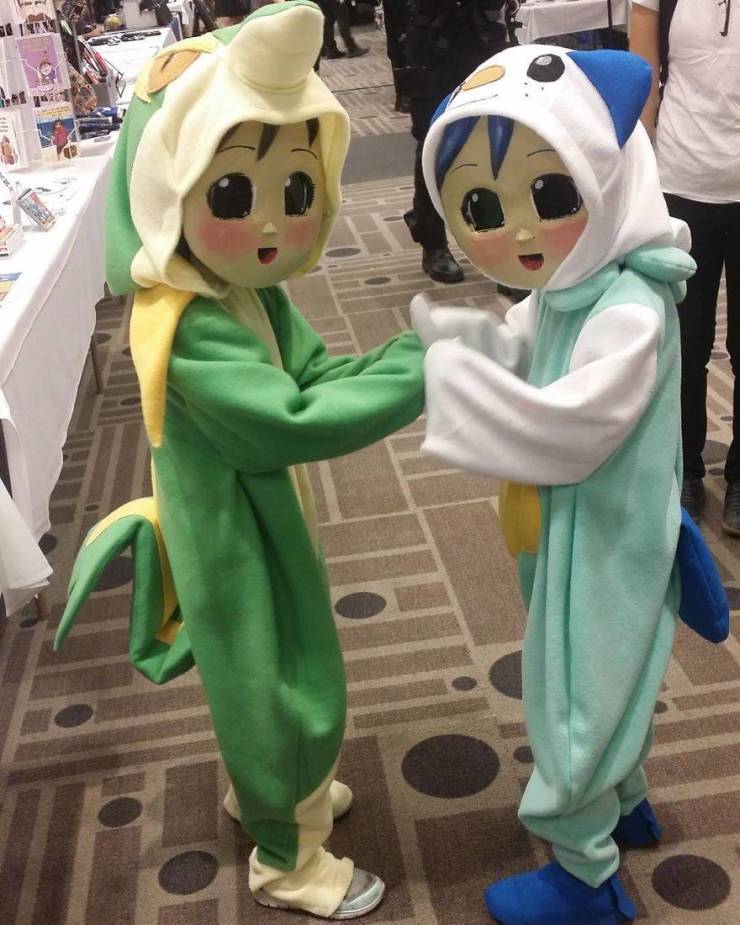 Oshawott (Japanese: ミジュマル Mijumaru) is the Water-type Starter Pokémon of the Unova region. Its classification is the Sea Otter Pokémon. It has the ability Torrent, like all other previous Water-type starters. 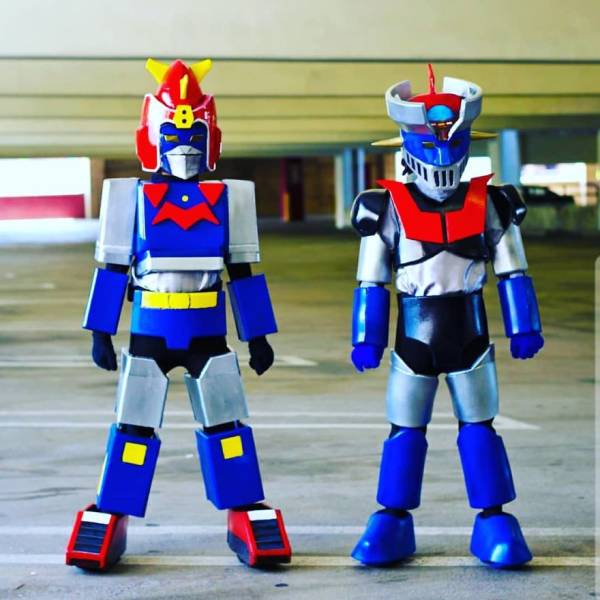 Voltes V is a Japanese anime television series that was first aired on TV Asahi starting April 6, 1977. It was created by Tadao Nagahama as the second part of his Robot Romance Trilogy , of the Super Robot genre.

Conceived as a second part/remake of its predecessor Combattler V, was released Italy, Spain, and The Philippines, dubbed in their respective languages except initially in the Philippines, where the first airing, in 1978, was dubbed in English until 1999 before they switch their language from English to actual Filipino in early 2000’s. 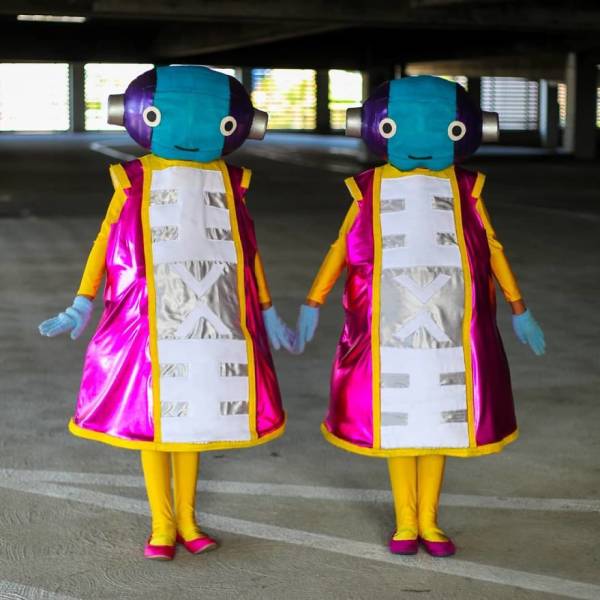 Grand Zeno (全王 Zen’ō, lit. “King of All”), the Omni-King, is one of the kings of the 12 Universes, one of the two entities who stands above the entire multiverse, alongside his future counterpart, Future Zeno.

Loading...
Previous This Cat Knows What Its Owner Really Needs
Next In This Swiss Cinema You Can Now Feel As Comfy As You Want