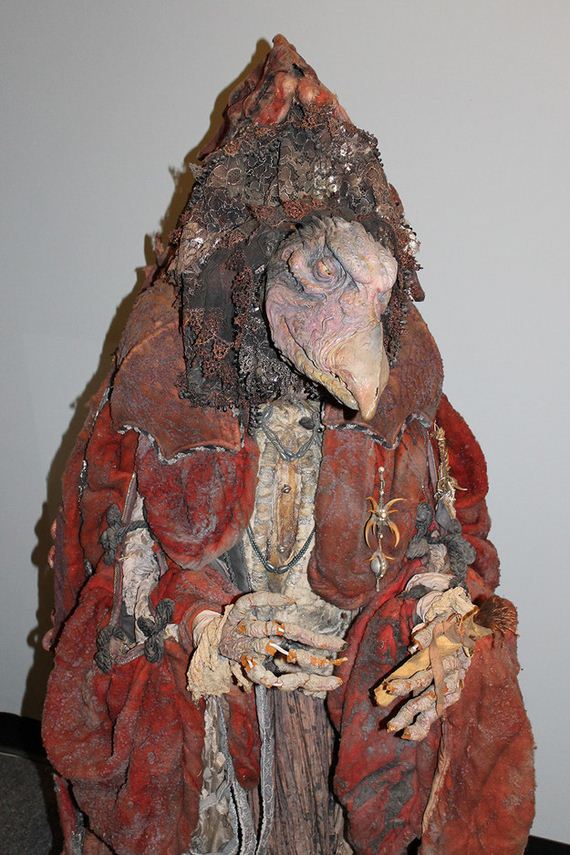 I traveled to the Creature Shop for an exclusive look at what’s under the fur. Here’s what the mentors from Syfy’s Jim Henson’s Creature Shop Challenge had to say about their creations.

Welcome to Jim Henson’s Creature Shop, where all your dreams (and nightmares) come to life. 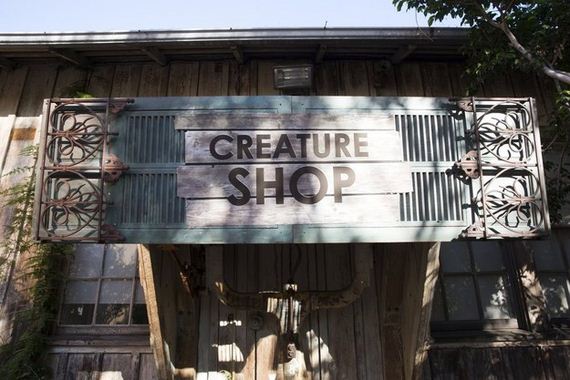 I was thrilled at the opportunity to see Fraggles, but terrified I might run into one of the Skeksis from The Dark Crystal. BOTH OF THESE THINGS HAPPENED. 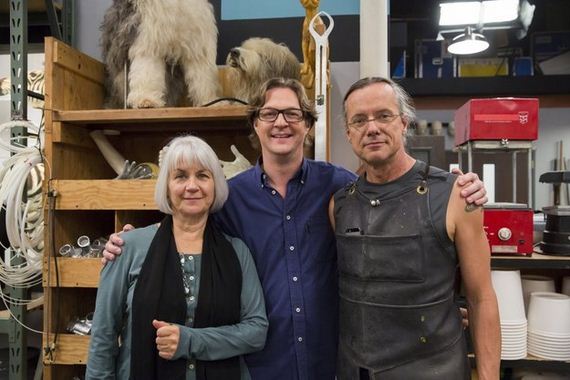 This trio also serves as mentors on Syfy’s reality series Jim Henson’s Creature Shop Challenge. And with good reason! Zobel (left) is the lead fabricator and has worked on projects like Sesame Street, Fraggle Rock, and Dr. Dolittle. Brooke (middle) is the Creature Shop creative supervisor, and his credits include Where the Wild Things Are, The Flintstones, and Dinosaurs. Criswell (right) is the mechanical engineer, and has put his skills to work on Critters, Pushing Daisies, and The Hangover, among others.

Here’s what they taught me as we made our way around the Creature Shop. 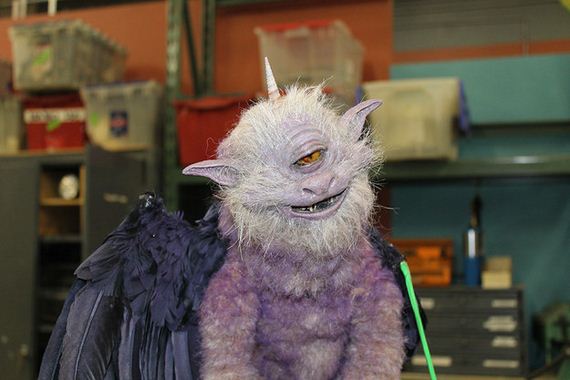 And he looks terrifying without his skin. 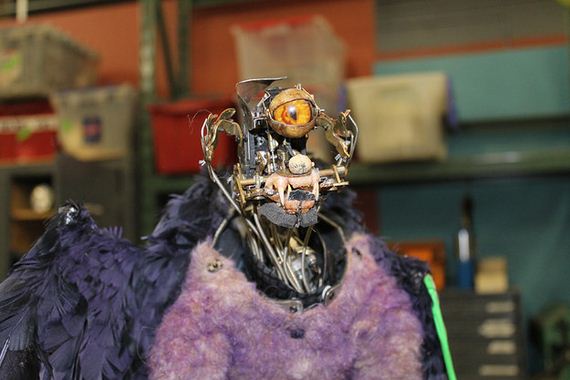 GAH. “All these little motors that you see, these little servo motors here, they operate all the facial stuff,” Criswell continued. “His little ears wiggle, and he has a top and a bottom blink and an eye rotation, and a jaw, and a smile, and all that stuff.” It’s cute when you put it all together, but nightmare fodder otherwise.

The wings are handled by puppeteers, and the rods are green so that they won’t show up on screen. 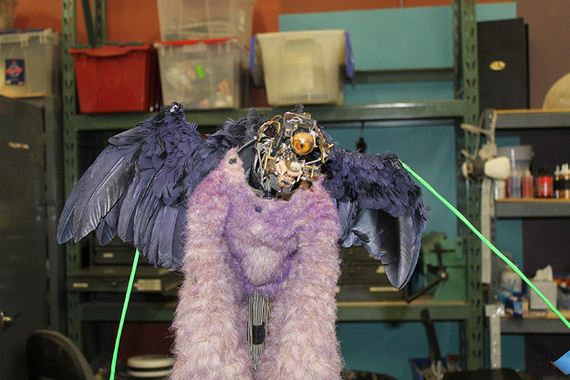 There’s a lot of green tape at the Creature Shop. Many of these creatures are filmed against green screen so that aspects like the rods can be digitally removed. According to Brooke, it takes about five people to operate Scoots.

After the animatronics come the skin, then the fur, then the individual hairs, which are added one hair at a time. 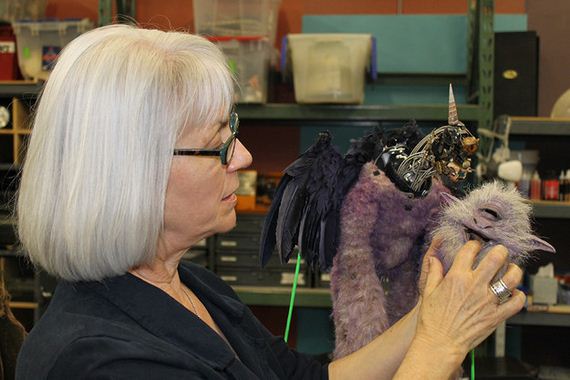 It can be an incredibly tedious process. “He’s a little guy, so it wasn’t too bad,” Zobel recalled. “But one by one is slower than laying a piece of fur.” The titular creatures for Where the Wild Things Are, for example, had individual hairs that took weeks to put on, as opposed to Scoots, whose facial hair application lasted about four hours.

Some creatures are way more frightening than cute, like this two-eyed, two-horned, flying purple people eater. 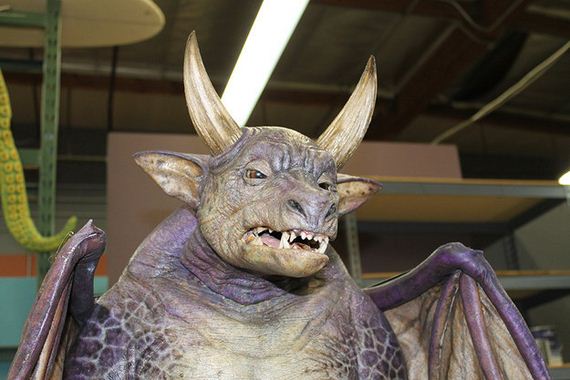 Brooke noted, “The concept was that you’re going from sort of a cute, almost whimsical little character to something that’s far more aggressive, and more scary, if you’d like.” I’d like to run screaming, thanks. “This one is operated with your hand, so your hand would go up in there to move the head,” Criswell demonstrated. “But the jaw and the lip movement and the eye blinks and the ears, they’re all servo-controlled. There’s actually about 10 little servo motors in the head to make him come to life. As with the other one, the wings would be rod-puppeted. And the hands are cable-controlled.”

Those hand controls are heavier than you’d think. I operated the hands for about 10 seconds. I honestly thought it would be a lot less strenuous — my knuckles got a quick workout.

Not every creature is created to scale. This little lady — her name is Yolanda — is supposed to be bigger than Attila. In real life, she’s almost petite. 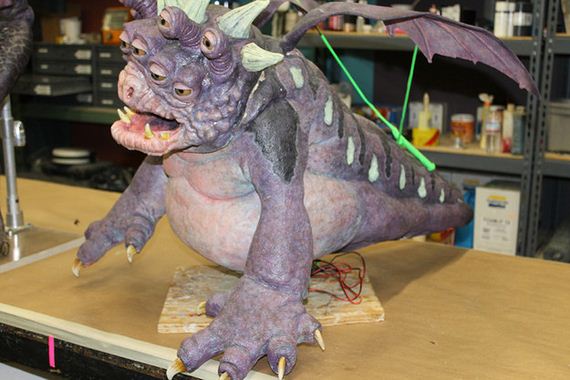 OK, perhaps “petite” is the wrong word. She’s still a giant, bloodthirsty slug. “In order to make him manageable in the time we had to make him — he’s actually quite small,” Criswell said. “But he was enlarged in the piece.”

There are always extra eyes. It’s a little unsettling, but at least I didn’t have to see Yolanda without her skin. Shudder. “Whenever I do anything, I try to do extra stuff so I can kind of troubleshoot it from outside,” Criswell explained as he held up an eye. “Once stuff gets covered in foam, I can’t always do that … I always do these little extra parts, and if you were to take the skin off, you’d see exactly this stuck up in there.”

The finished creature looks a lot like Brooke’s original design, which I saw later on the tour. 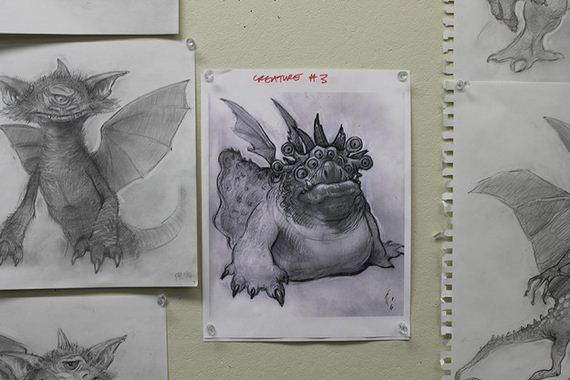 “As you’re building obviously some things have to change, but this was the drawing and I think we ended up with something fairly accurate,” Brooke said. “As much as possible, we try to stick pretty closely to the designs, but obviously as you imagine, going from 2D to 3D there are things we’re going to have to change and adapt. But we try to keep the spirit of the design.”

Skeksis are SO SCARY. But you knew that already, right? 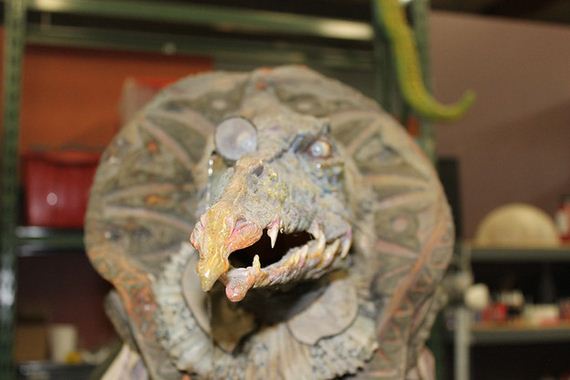 I mean, look at this thing. You might remember the Skeksis from The Dark Crystal AND YOUR SUBSEQUENT NIGHTMARES. This guy has been turned into a display, so the head is fiberglass and not able to be manipulated. He’s still truly frightening.

But if you’re feeling freaked out, take comfort in the knowledge that Skeksis don’t really have bodies. 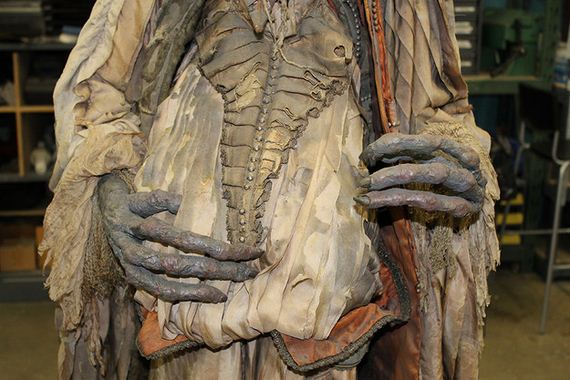 “The Skeksis didn’t really have bodies because the puppeteer is all up inside here, and there’s a pad here to give it some fullness,” Zobel said, “but if I lifted up this skirt, it’s just the structure to hold the thing up for display.” That’s kind of a relief.

There’s a lot of attention to detail, which is something Jim Henson always concerned himself with. 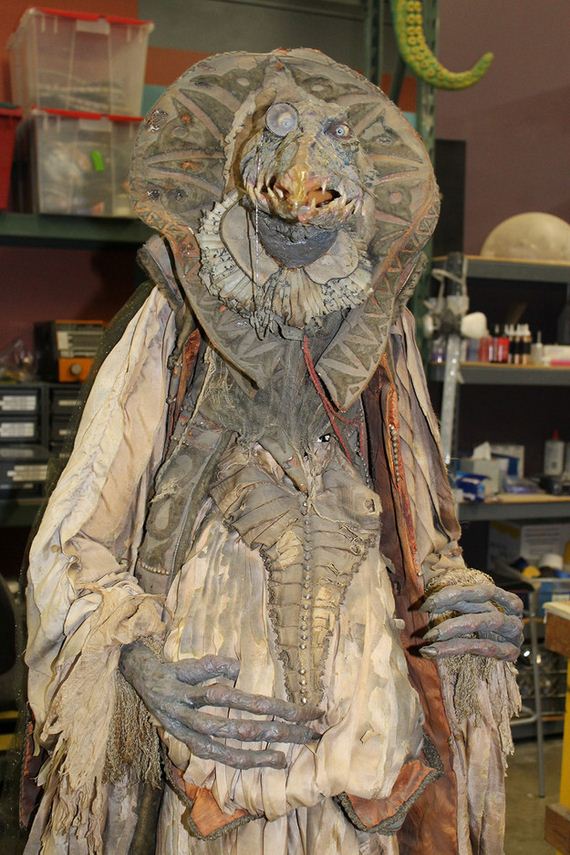 This costume is original to the 1982 film. “There’s a lot of detailing that goes into the costuming because it reveals a lot about the environment they live in, and their backstory of being once grand and now impoverished and dirty,” Zobel said. “We still are inspired to do that.” She went on to say, “Jim Henson always had a big plan for what he wanted it to look like, and he liked to play with it so there’d be lots of attention to detail.” 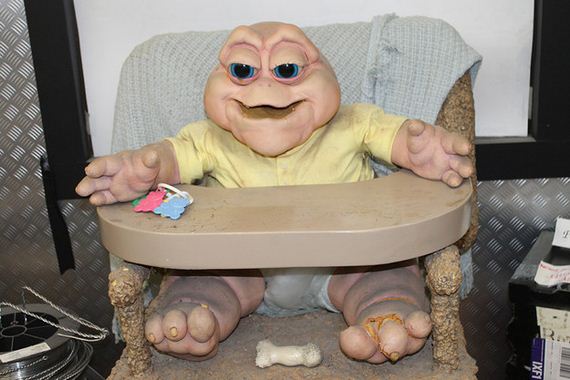 He’s seen better days, but he’s still precious. He’s a hand puppet of sorts — the puppeteer would hang out underneath. Criswell added, “We still have a puppeteer for the mouth, but eyebrows, eye blinks, eye rotation, and in this case actually the legs, were all servo-controlled for this little guy.”

Dinosaurs was an incredibly difficult show, which is probably why no subsequent series have attempted the same thing. 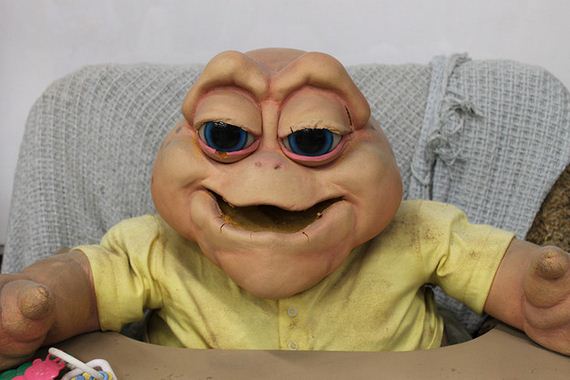 “It was approximately $80,000 a minute for downtime, so if we had a character that went down and broke, we had a crew standing around waiting for that character to be fixed,” Criswell recalled. “So it was very challenging on our end, because no one had ever done a show with fully animatronic characters to that point — and still haven’t done a show like it. The technology that we reached was [the] pinnacle and was fantastic, and there’s never been anything like it since.”

Alas, Baby Sinclair — like the rest of his family — won’t be around forever, because foam latex usually only lasts six or seven years. 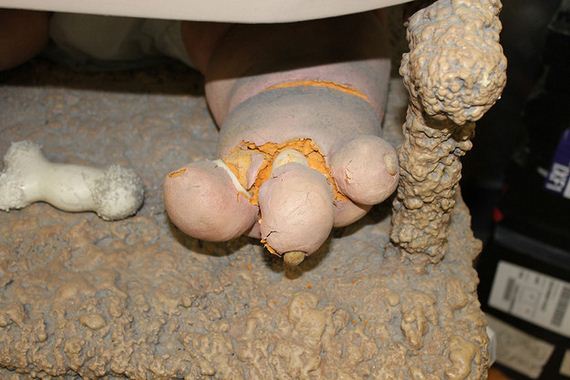 Keep in mind, Dinosaurs ended production in 1994, so it’s amazing that there’s anything left. “The thing that breaks down foam latex is light,” Zobel said. Brooke went into a little more detail about the decomposition process: “You’re dealing with a rubber. It’s based off of natural latex, which deteriorates over time, but you’ve whisked it into such a fine cell structure. The cell structure eventually over time, with light, dehydrates and gets to the point where it literally just turns to dust. And you can’t save it. You can’t reconstitute it.” And there you have it: Dinosaurs’ extinction.

The pigeons from The Producers are still alive and kicking, and they look freakishly real. 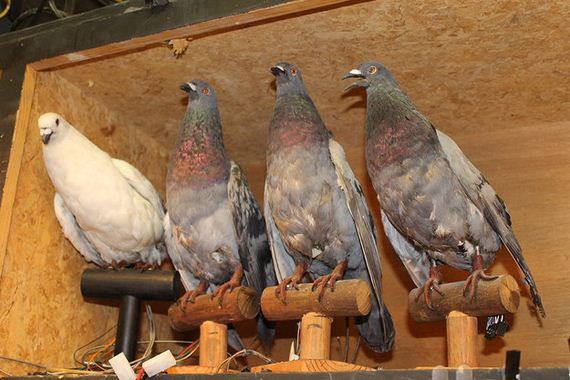 “That was a great movie to work just because Mel Brooks was on it,” Criswell said. “And Mel loved those pigeons. He would just spend hours playing with those pigeons, because you could really interact with them.” As for why they’re still around: “Those last a lot longer because there’s no foam latex involved.” And the feathers? Put on one at a time.

The Country Bears are also still with us. Well, barely. It’s a little tragic, to be honest.

And there’s another relic from Dinosaurs, a background head that’s somehow still in one piece. 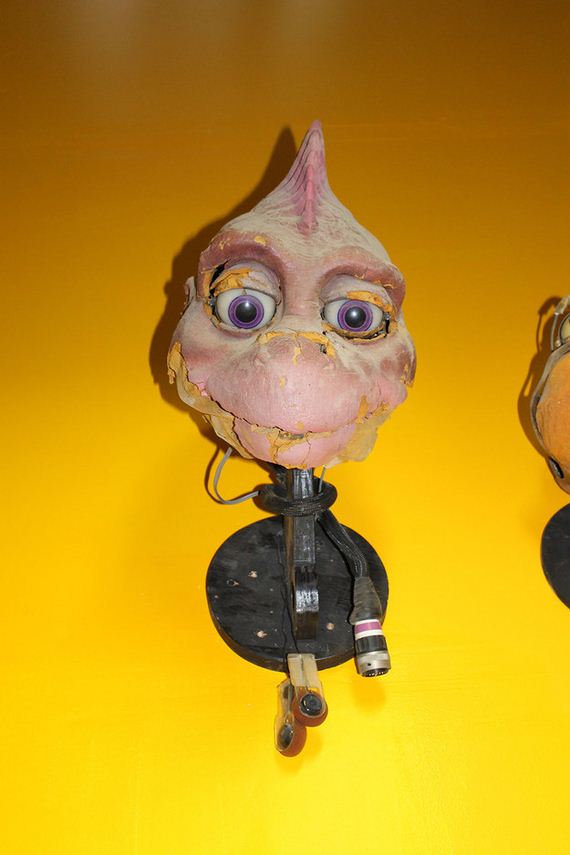 “This is one of the only ones that exists with a partial skin on it,” Criswell said. “And you can see how it’s deteriorated. I try not to ever touch it. And you can see where I have touched it, and it’s just falling apart.”

Seriously, though, there are eyes everywhere at the Creature Shop. So many. And they’re giant. And they move. It’s a little overwhelming.

In addition to eyes, hands! So many hands. 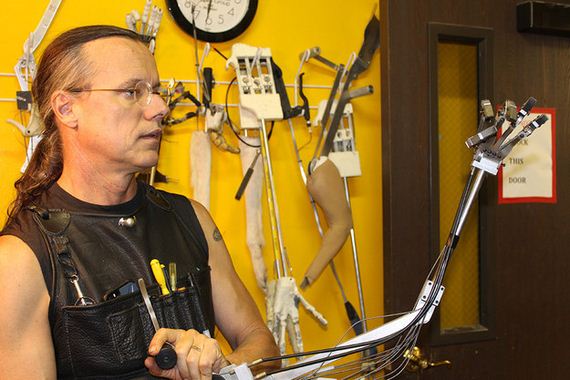 These are designed for a variety of different functions. The one Criswell was showing me here had very intricate finger movement, a testament to the fact that the finished creature had to smoke a cigarette.

Also, the puppets are clearly trying to take over. I mean, look at this guy. He could take Criswell’s place and no one would even notice.

There are familiar faces everywhere at the Creature Shop. 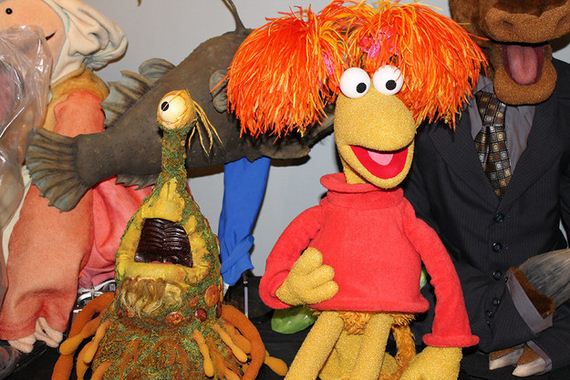 I could only take pictures of some of the creatures, many of which are still involved in current productions. As Brooke explained, “We also work as a work-for-hire shop, so we’ve done a lot of commercials and movies for third parties … Oftentimes we’ll deal with clients where — you have to be totally secret as to what we’re producing.” So, plenty of secrecy. But it was delightful to finally see a Fraggle up close and personal.

But for the most part, nothing is real. 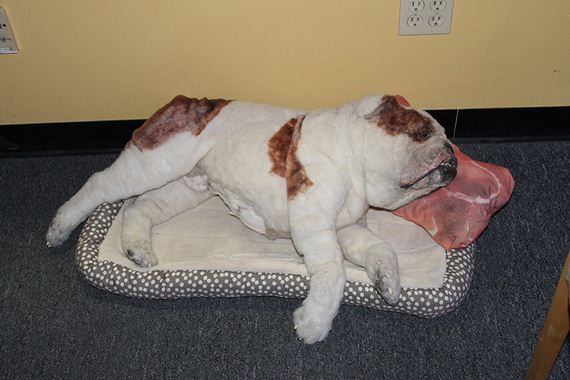 Not the monsters, not the cute little creatures, not even this dog I tried to pet. I really wanted the dog to be real.

And yet, there’s something really cool about the fact that all of these creatures are tangible as opposed to computer-generated. 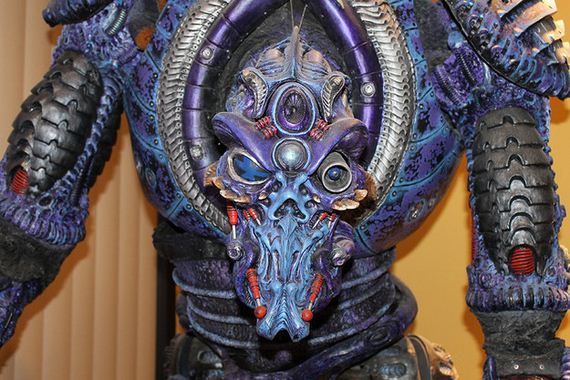 You can reach out and touch everything. (Don’t touch the foam latex. It will crumble in your hands.) I asked Zobel what she thought films lose when they use CGI instead of puppets and animatronics. “We think you lose the connection, even as a viewer to a film,” she answered. “You lose the connection to that being a real thing, because it’s not actually there. You know — we’ve come to know when something isn’t actually there. We’ve come to know when it’s CG. When it’s a three-dimensional thing, you can tell that too. There’s that investment of yourself into the character. If it’s CGI, it’s different.”