“This creepy face in between my great grandparent’s heads” – Gdorf2 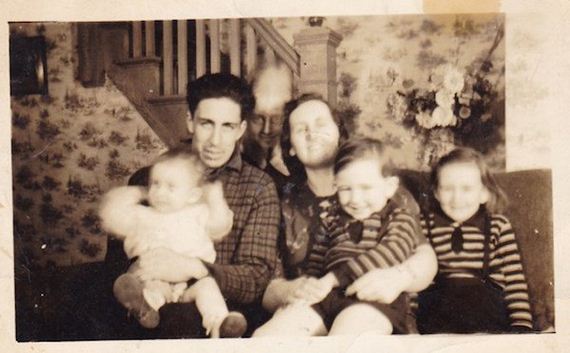 “My co-workers daughter caught this on the Queen Mary. They were taken on the same day, several moments apart, on a regular camera, just at different angles. NO ONE was over on the other side. This made me a believer.” – Charcharbec 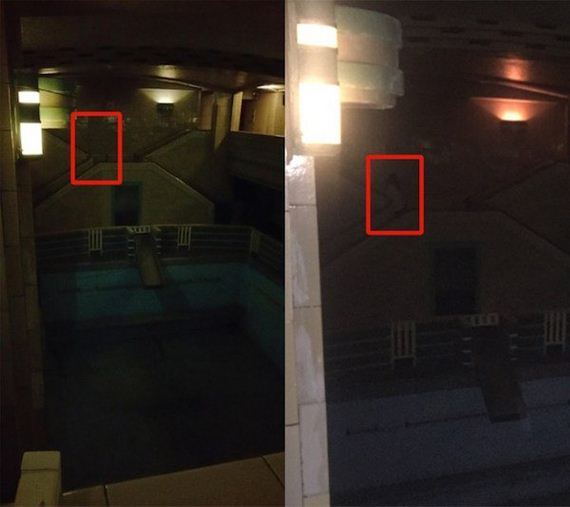 “Apparently a little girl died in front of the right window. Look in the bottom of the window. Also there other picture of this window by other sources where the face is captured but in different locations, so it isn’t a physical object inside the house.” – anonymous 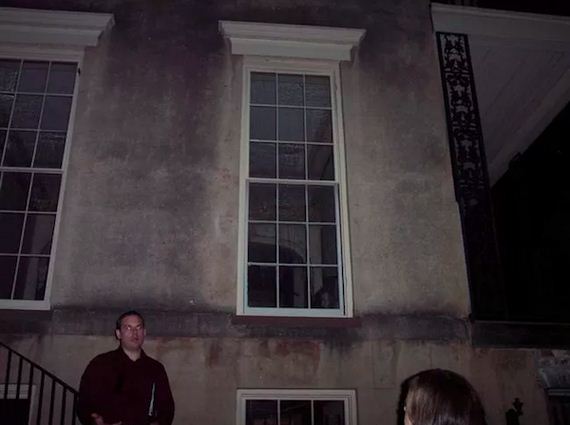 “My friend forwarded this image to me says his friend was working in his basement crawlspace.” – WakingJehoober 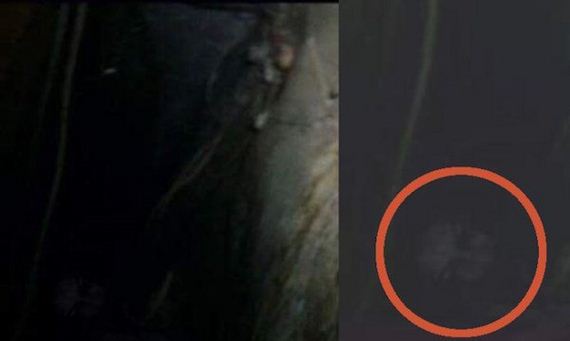 “Here is an image I captured last year in my motel room in Virginia City, Nevada. Look at the mirror to the right, no reflection. I also believe there is a second spirit. You can make out a face over his shoulder. First image is original and untouched. I played around with the image and was amazed to see the shadow take the shape of a man.” – RJuarez 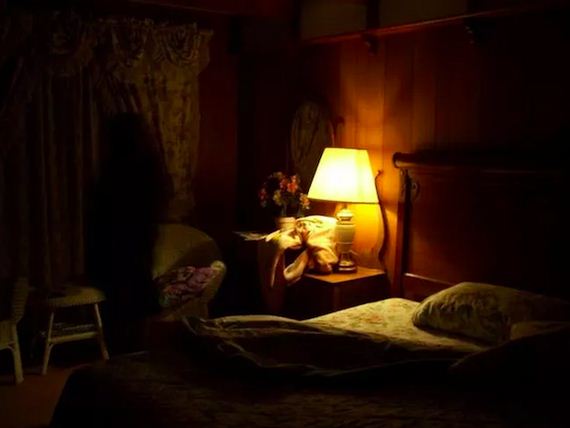 “This photo was taken at a now-abandoned hospital where I used to work.” —Mzambrano 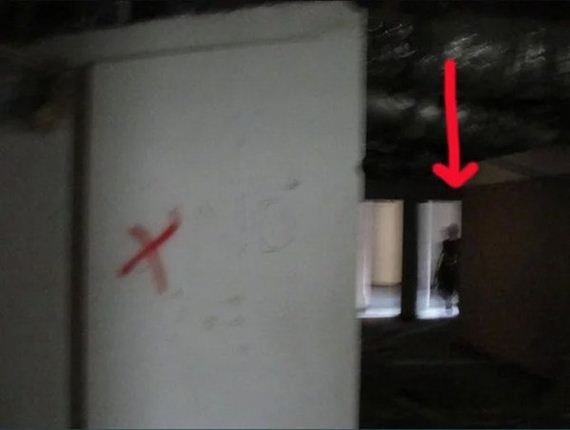 “I do not speak English, I use the Google translator. I live in Hungary and the Hungarian language I speak. The photograph was made in 1943 in Hungary, in Kaposfüred. My mother is in the foreground, photo taken by my father. A little girl standing in the background but does not know anything, just to show that there are no arms, no face, it’s like a ghost or a demon.” – Szigeti Gyöngi 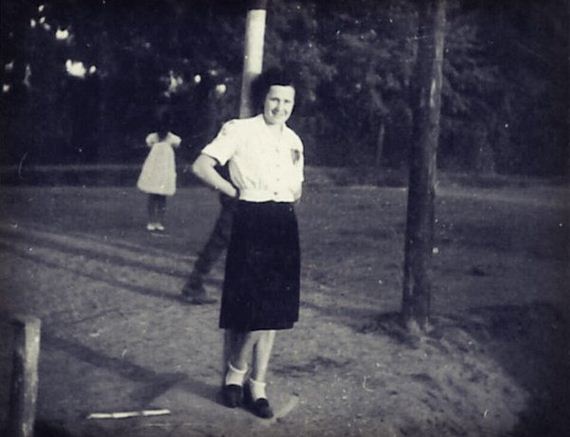 “A friend of a friend was going through his photos from last year’s hunting season and found this pic. He says the trail cam is activated by movement yet there were no pics of the entity anywhere else except in this photo. If it were a person there would have been several photos where the person entered into the vision field of the camera, yet only this photo was taken. 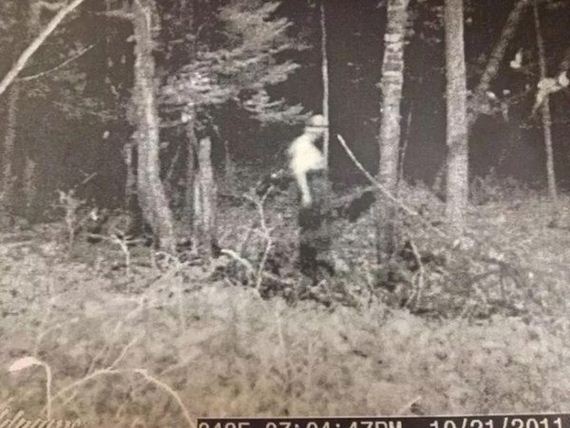 Natasha Oliver posted this chilling photo of her friends hanging out at an empty new housing block in Shropshire, England. The group didn’t realize that a ghostly apparition of a woman was quietly watching them until they started looking over their pictures. But when some guys from the group went to go find the creepy woman, there was no one in the building. “It’s on the site of an old wood yard so there would have been people working here,” Oliver said. “It could be any one of the workers. It looks maybe like a lady holding a baby.” – Natasha Oliver 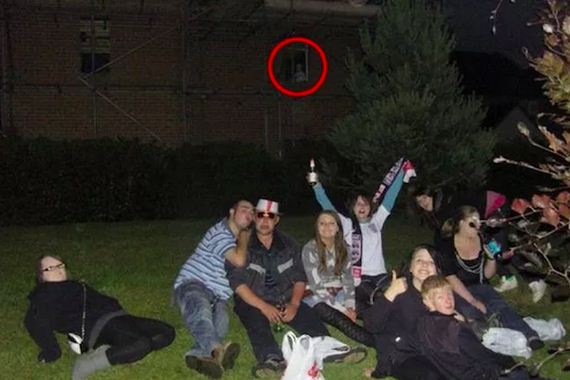 “I am the kid with braces in the picture and I can honestly say that is not my hand. My parents’ house is crazy haunted.” – Qbaxter77 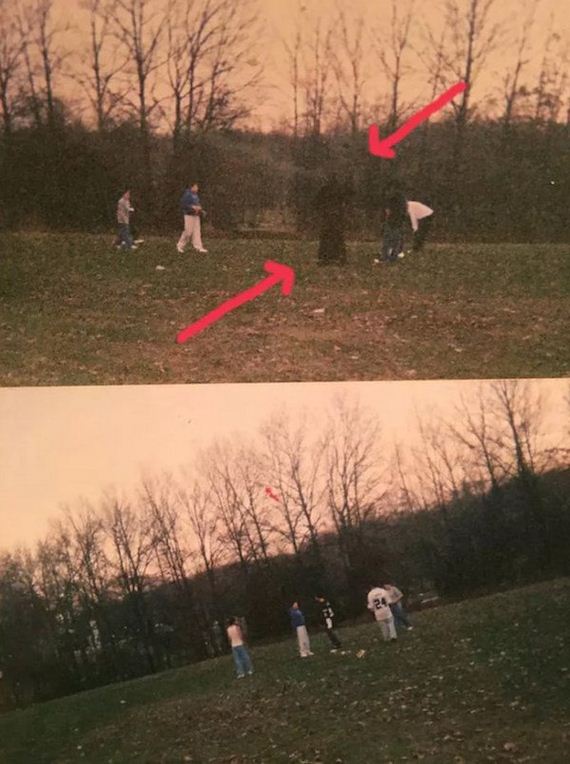 “I pulled up some carpet at the apartment I grew up in Queens, NY because I knew there was perfectly good wood floor under it. After putting the room back together I noticed a dark stain that kind of looked like a body. Almost like a body was left there for a long time and stained the floor so I snapped this pic. Sorry for the quality; it was taken 2008ish on a Blackberry Bold. The white object is what is strange or ‘unexplained’ about the pic, not the stain.” – Supervisions 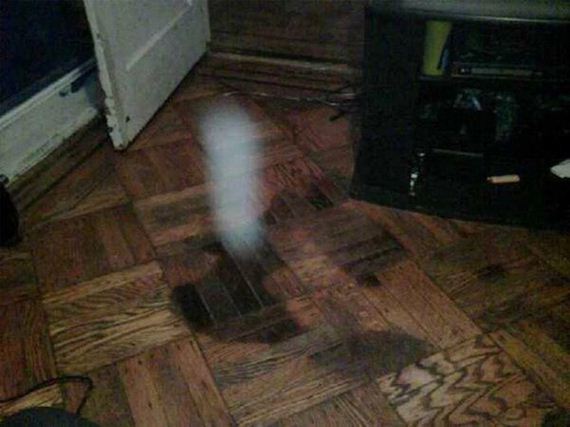 “An image caught in my former apartment in the upper floors of a centennial house on a cheap digital camera using timer shot on my PC, while I was at work in 2006. I was living alone at the time, second-floor apartment, and this is NOT my landlord. Nothing stolen, nothing disturbed, all doors and windows locked and intact. The thing that really creeps me out about this picture (aside from the image) is that it’s the only one of a time lapse that was set to take a photo once every minute. The camera was somewhat hidden—it didn’t have a ‘shutter sound,’ and yet the figure appears to be looking directly at the computer desk, where the camera was hidden, the very moment it was taken.” – Lazlounderhill 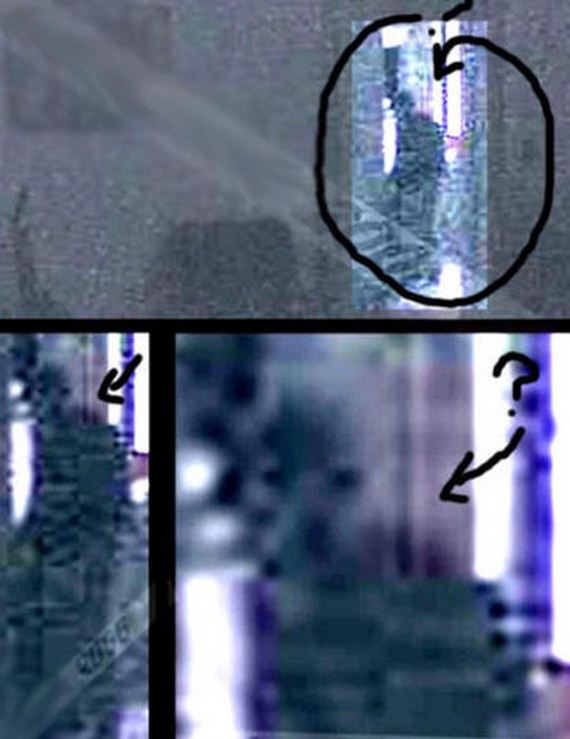 “Email from my dad, his friends’s neighbor has had several sightings of a little ghost girl. You can see her face in the bookcase by the chair.” – anonymous

“I took this picture about 6 years ago in a power plant in Texas. We were doing electrical testing on nightshift. It started as an orb floating around and turned into this.” – TyTriplett 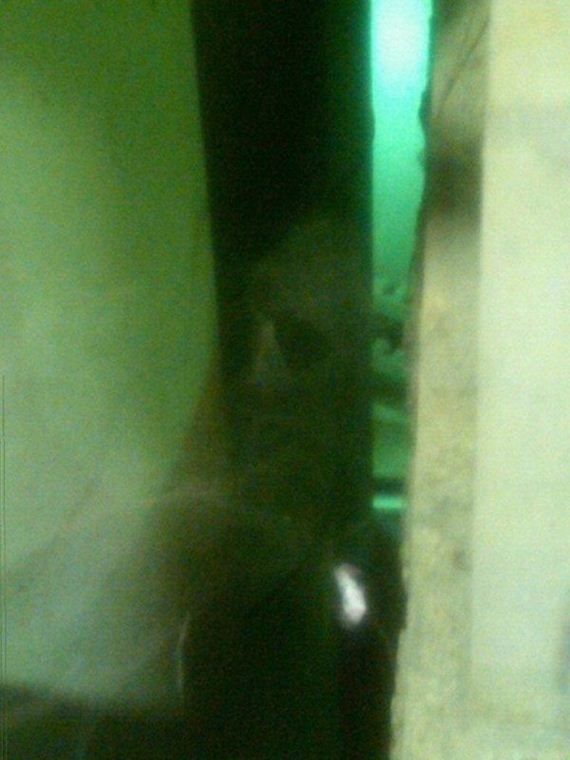 “This was taken in an old jail in St. Augustine, Florida. I set my camera to ‘burst’ mode, and what looks like half a face popped up in the bottom right corner of only one picture.” – Georgerizz 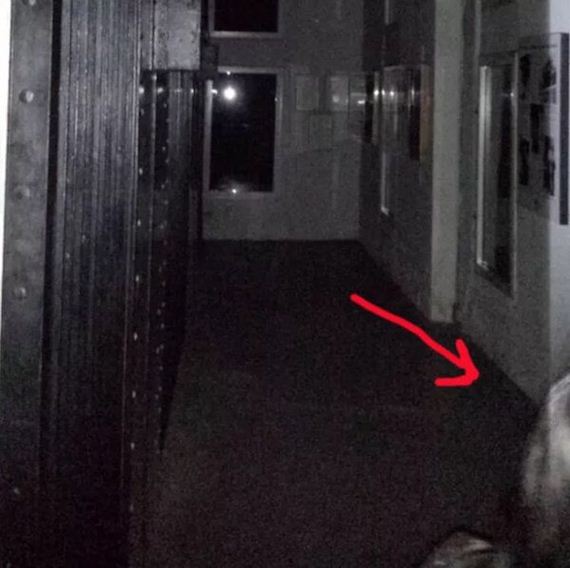 “I grew up in a small, rural town in between mountains. A couple of years ago, they were tearing down an old elementary school. A guy my mom knew went in and took pics with his cell phone. When he uploaded them, this was one of the pics. I don’t believe in stuff like this at all. I just really don’t know how to explain it since it was a cell phone pic and I’m pretty sure that no one in my Podunk hometown knows how to make fake pics.” – Inthelionsmane 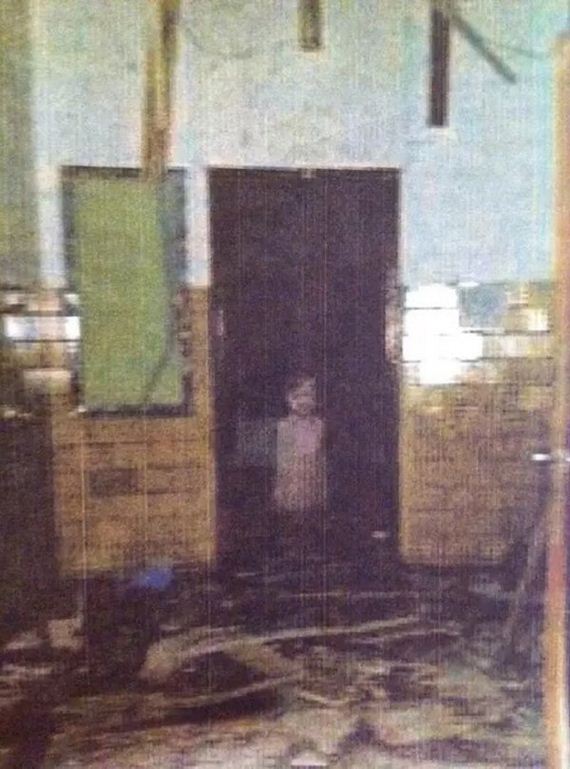 “My friend took this picture of his cousin in their new house. He says it was just the two of them there but that’s not what it looks like.” – anonymous 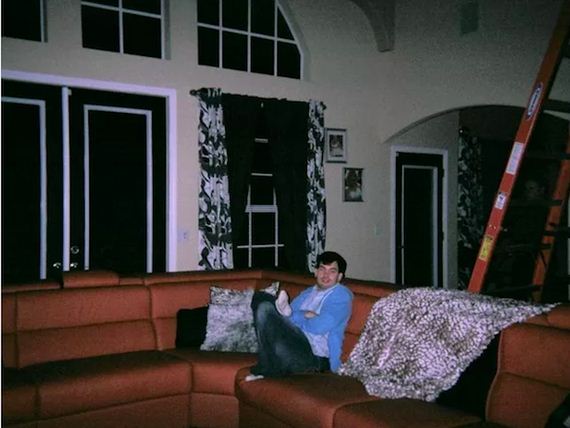 “This is a photo of my father that was taken by his girlfriend in Colorado (Rocky Mountains). This photo was taken on an iPhone but zoomed in, hence the poor quality. There was no one around at the time. My Dad said he had just came from that area and no one was there. His girlfriend also saw nothing behind him when taking the photo. She didn’t realize the figure was in the photo until they returned home.” – Daddy_sprinkles 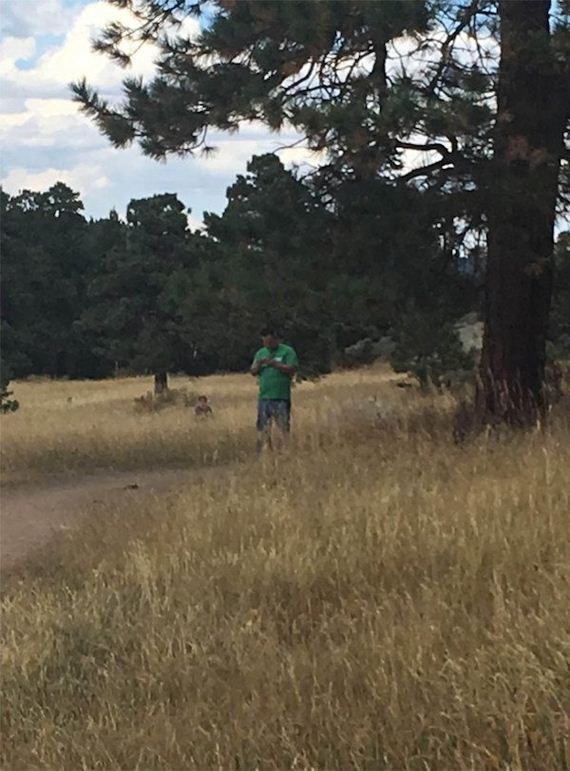 “My friend sent me this picture she took of her little cousin.” – anonymous “My friend had his stealth cam set up on a deer trail on his property in NC. This girl popped up on 1 of the frames. Also, there is what appears to be a man standing in the top right.” – Pageeto “I took this pic with my digital camera near a residential rental in Hidden Hills Ca. This was a chance photo. I took picture because I thought the vegetation looked eerie. This is what appeared when I viewed picture. Even though I believe in the existence of ghosts, I still found myself scrutinizing the photo, trying to find some logical explanation for what I saw. I didn’t believe the color would be so vibrant there are also a few other anomalies that appear a floating head and some type of old west mountain man. Yeah, like I was saying, when I looked back at the vegetation there were no red and blue or bright white that I could have mistaken for the clothing.” – anonymous