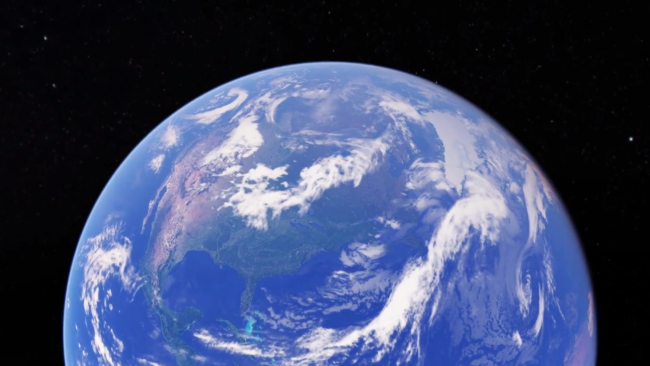 As much as we think we know about this incredible planet we call home, Earth still has plenty of mysteries left to be discovered. It’s a big planet and humans have only been around for about 200k years or so. As modern technology advances though, the study and exploration of Earth is getting easier and easier. Enter Google Earth–The company with an ambitious goal to seemingly photograph the entire friggin’ planet. While doing so, they have come across things that have stumped not only them, but real life scientists as well. 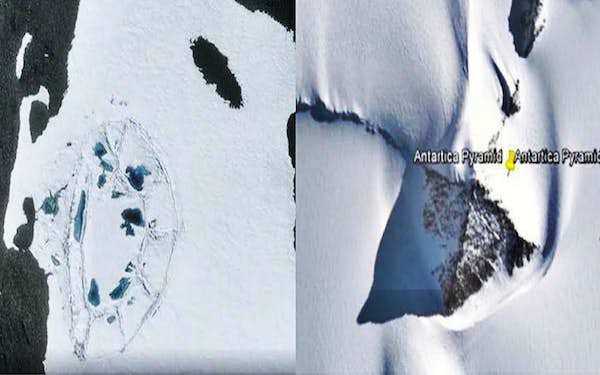 The great pyramids of Egypt are one of the most visited and recognizable attractions on the entire planet. A pyramid in Antarctica, though? That’s a little strange. Google Earth discovered this pyramid in 2016 and it has baffled scientists to this day. Some claim the pyramids are proof of some sort of climate change, built by men in the Antarctic before it was covered with ice. While other scientists once again claim, this is a natural formation of Earth. We all know the real answer though, right? 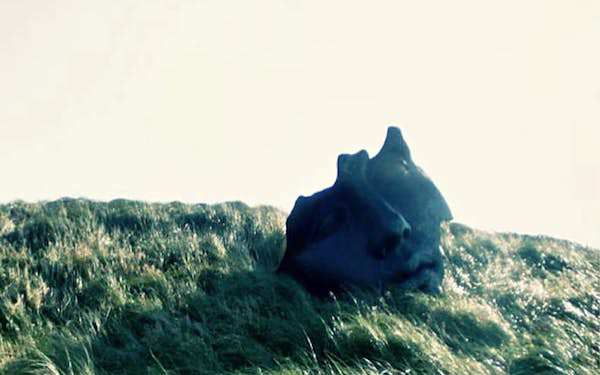 This looks straight out of a Ridley Scott film, but I assure you, this is real life. It’s not clear if this is a remnant of a statue that was demolished long ago, or if it was made recently and placed here purposely. The biggest issue scientists have with this one, is no one knows where Google Earth shot this at. No one has been able to track it down. 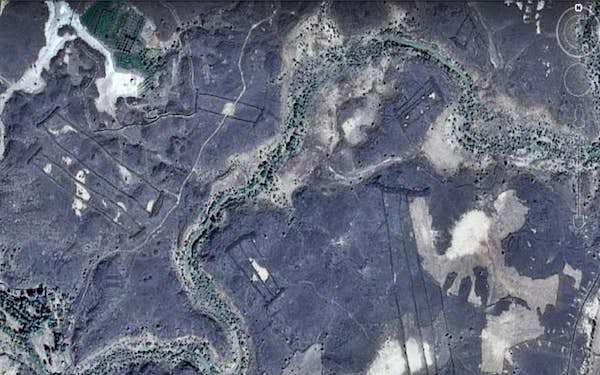 Wonder what the hell you’re looking at? Yeah, so did scientists. This is a volcanic region of Saudi Arabia. These “gates” have no discernable meaning or reason for being here. All scientists know is, they’re made of stone and are the oldest man-made structures in the entire region. Some believe they were built for religious reasons, but to this day no one has figured it out. 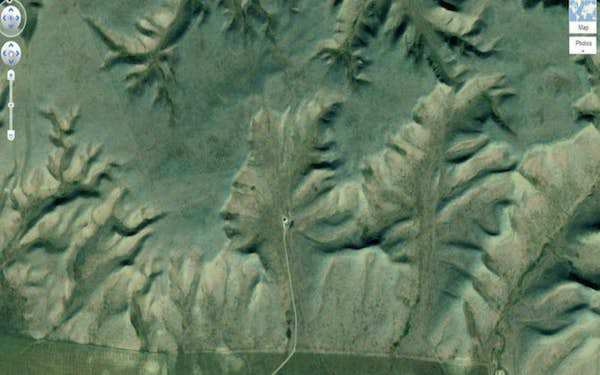 This face in the landscape was captured by Google Earth in Walsh, Alberta. It initially caused quite an uproar with many fanatics trying to make all sorts of connections. Some, believing it was an Indian Chief looking over his people, named it “The Badlands Guardian.” This one still has scientists stumped to this day. They claim it’s a natural formation, but have no explanation for why it has such strong human features. 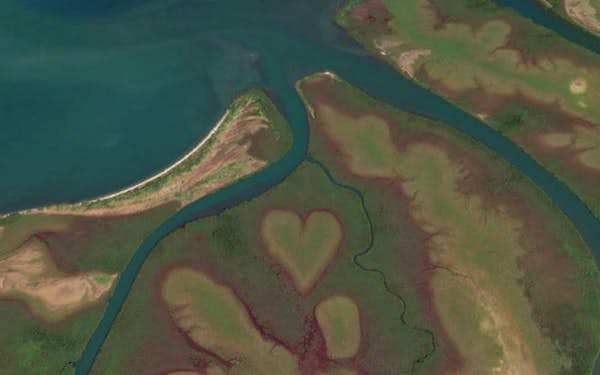 Though, after a quick browsing of Google Earth, many heart shaped formations become visible, this one is a little different. You see, the majority of such formations are man-made. This one, however, was created completely by mother nature. Not only can science not explain it, they honestly haven’t even tried. Mother nature loves you! 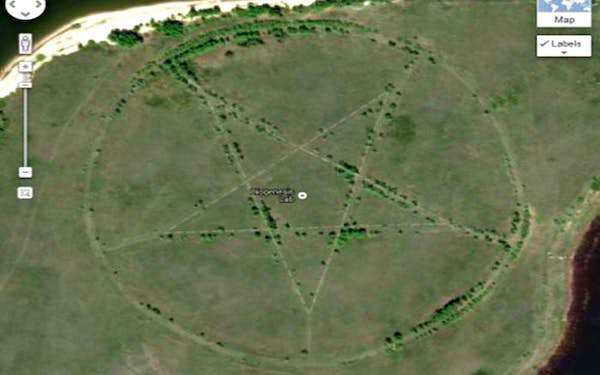 And at the other end of the spectrum… Clearly this pentagram is man made. The fields were shaped in such a way on purpose. That brings us to the when and why? No one has stepped forward to claim responsibility, however, so we will likely never know. 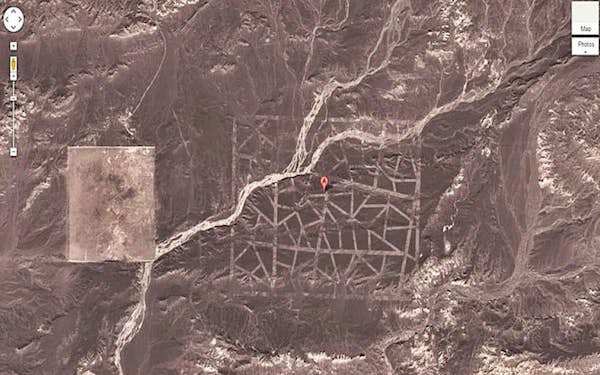 These patterns in the Earth in China are partially visible from space. Weirdly enough, however, this design has no known affiliation to China or Chinese culture. There is no known reason for the design and no historical references to it. Though it clearly looks man made, no one has claimed responsibility and scientists remain baffled about its meaning or purpose. 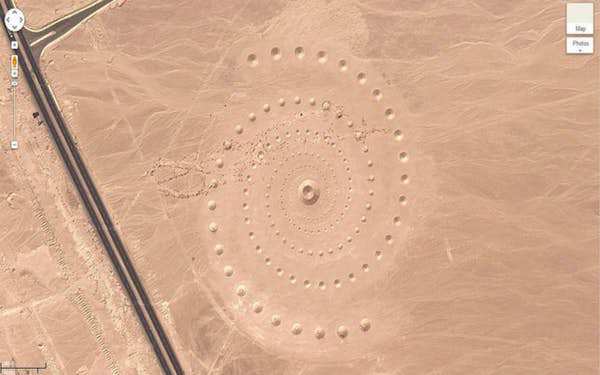 Pattern in the Desert

This crop circle, if you will, was discovered by Google Earth in the Red Sea Governorate in Egypt. Though it is clearly manmade, no one could explain how it got there. Eventually, however, a group named D.A.S.T. claimed responsibility for the formation, saying it is an art installment named “Desert Breath.” 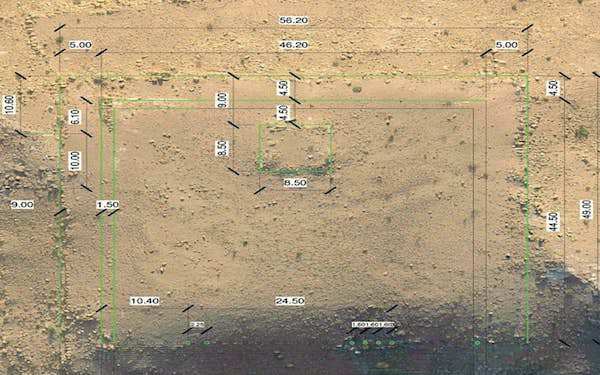 This is a picture of the Petra region of Jordan, a region which still remains a mystery to most people. In order to gain a better understanding of the region, scientists called upon Google Earth, among other resources. What they eventually uncovered, and what you see here, is some sort of monument. As it turns out, this monument dates to 4th Century BCE and had been completely overlooked by explorers in the region until Google Earth gave them a bird’s eye view. 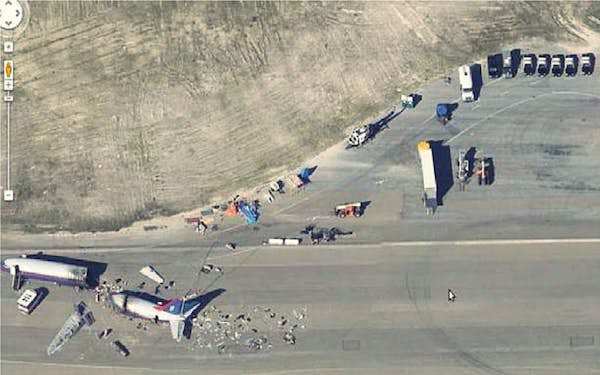 Aftermath of a plan crash?

This one is puzzling. It looks like the aftermath of a plane crash. You can see an ambulance and what might be other emergency vehicles. The area under the plane, however, it’s blacked or scarred with makes it even more unusual. Though scientist supposedly couldn’t determine what this was, in my egregiously uneducated opinion, it’s either a movie set, or emergency training. 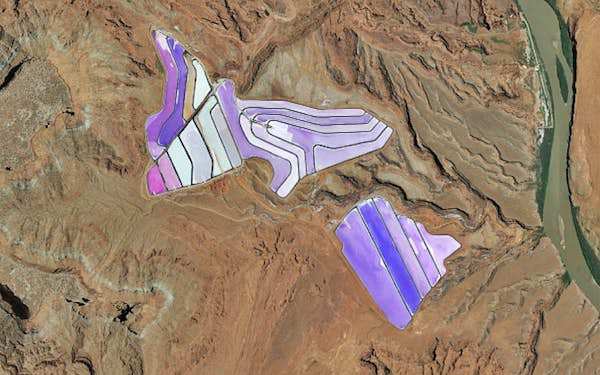 This water color in the middle of an otherwise colorless landscape doesn’t even look real, but I assure you it is. Scientists were confounded by these pools when they first came across them. They couldn’t reconcile how such color would show up here, of all places. Eventually, after discovering more, they realized these pools formed in areas once underwater. When the water eventually receded from the land, it left these pools of potassium behind. 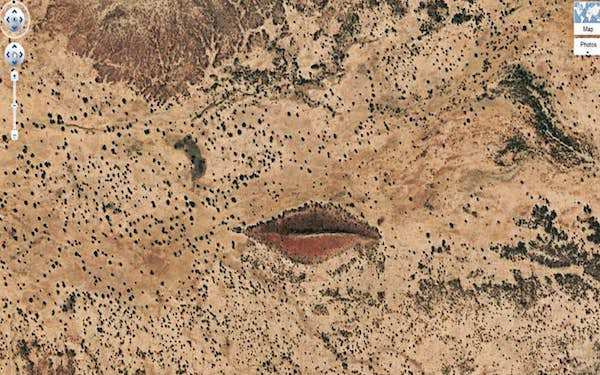 I’m gonna give you a minute to get all the jokes out of your system. I’m not gonna make fun of your mom’s lips, personally. It’s just not my style. These lush red lips are found in Sudan, an area almost entirely made of desert. From the ground, it’s nearly impossible to make out the arousing details, as the formation is a half mile long, made of rocky outcrops. Luckily we have the Peeping Tom power of Google Earth. 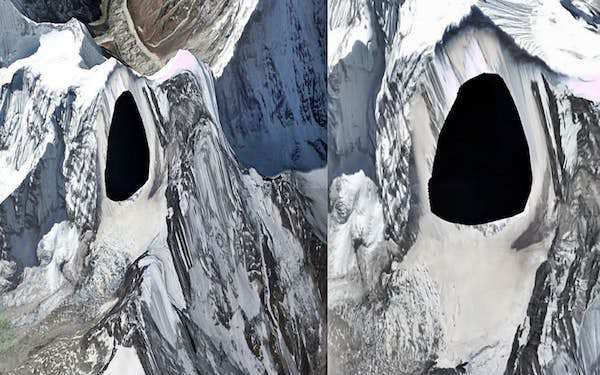 Now this is some especially unusual shit. There is an area in the Kantega region of the Himalayan mountains, 22,251 feet up, that shows up as a black spot in Google Earth. It’s not a shadow, it’s not manipulation (on Google’s part at least) and it’s not a camera lens issue. Before you ponder secret military bases or Aliens, people have climbed this region in the past and not noted anything unusual. In fact, they’ve specifically said the region is in plain view and ordinary. So what is it? Electromagnetic interference? Aliens? 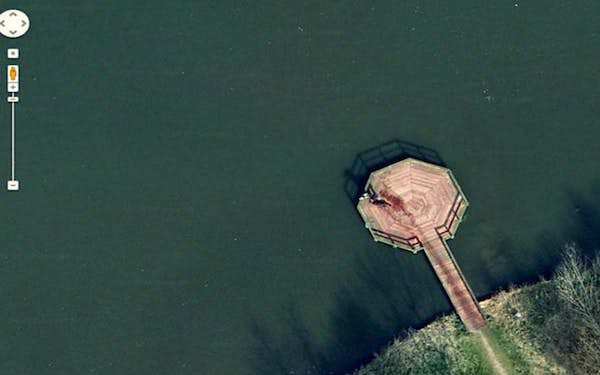 Uh… then there’s this

This is some next-level CSI shit right here. Though you can’t tell exactly what is going on, it certainly looks ominous. Those red stains trailing down the wood to the center look like a man dragging a body to dump. Something truly heinous must have happened here, or not. After investigating, it was revealed to be a man and his wet dog having some fun. We all watch way too much TV.

Previous Past VS. Present
Next Bad Jokes And Dad Jokes