What Are These Things?

A miniature mask I found in NZ
A: Balinese ‘yawning’ dance mask. It looks like a miniature version of the actual masks used in Balinese dance performances. 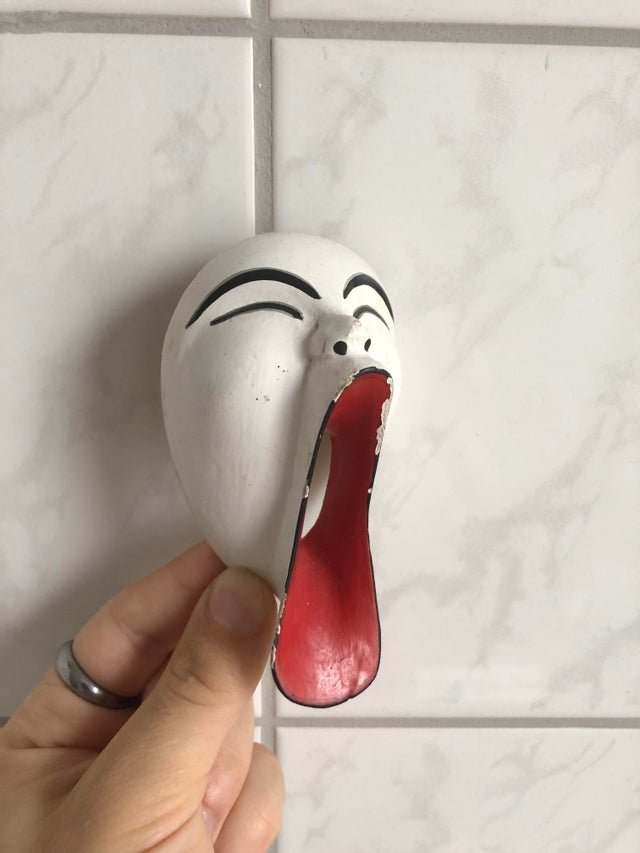 Does anyone know what this is? Found it in a bomb crater in Austria.
A: It is an Austro-Hungarian artillery qualification badge (or a copy of one). 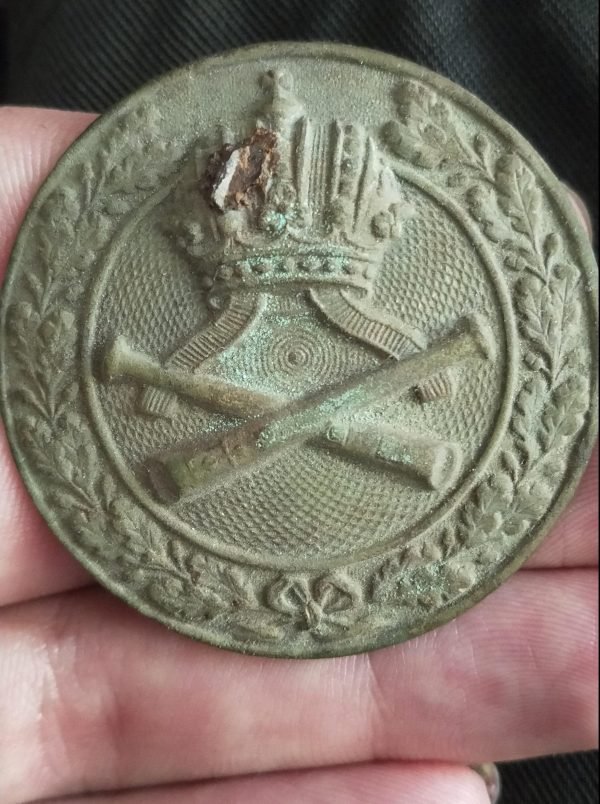 Came from a construction site. About the size of a lawnmower.
A: Leica DS2000 ground penetrating radar device (for location of buried pipes and cables). 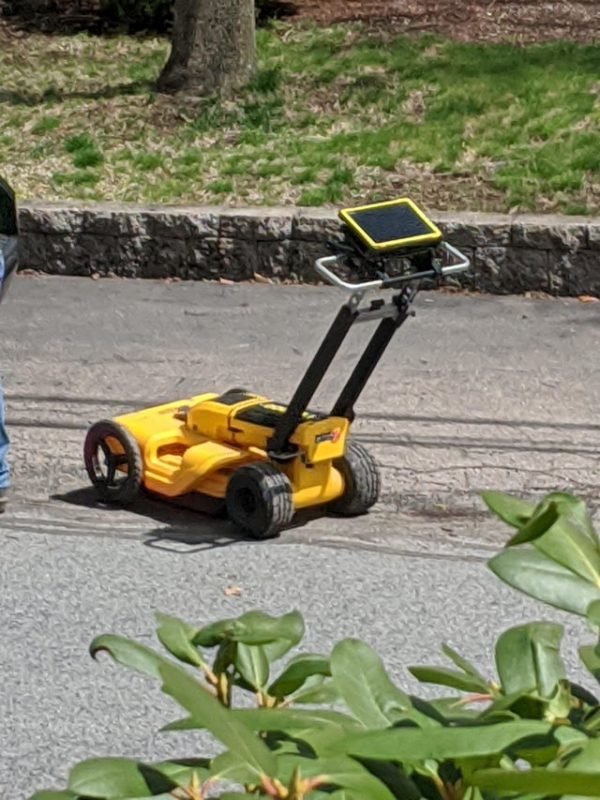 Found this while cleaning grandparents attic.
A: It’s a matchbox holder with a spot for a candle. You can strike the matches through that slit on the side. 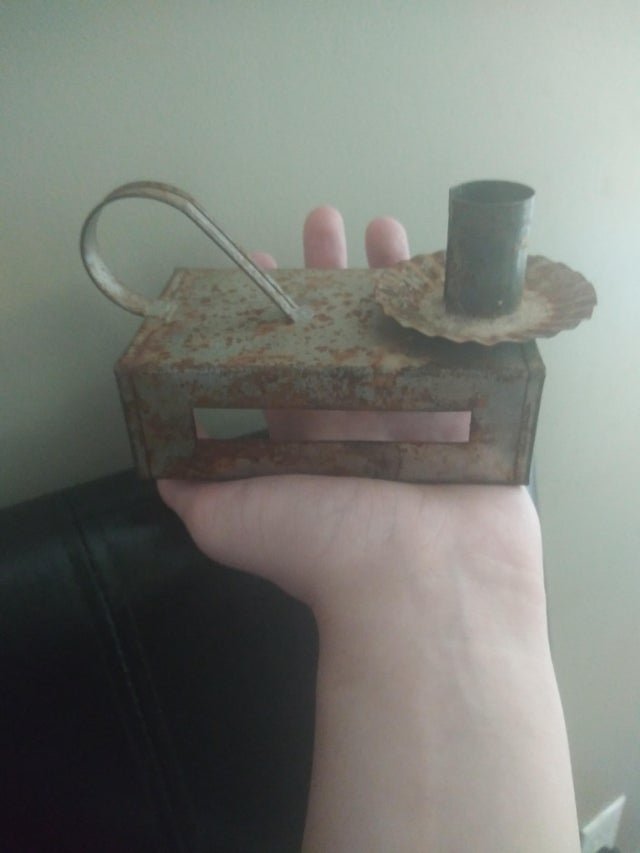 This is a replica of a keepsake passed down from my ancestors from Norway (the photo in the picture is of the inscription on the original). The inscription reads “a Norwegian twaare whisp”. What is this used for?
A: It’s a Tvare. Stirring stick for cooking, with tines at the end. a Norwegian whisk. Fashioned crudely from the crowns of conifer trees, etc. 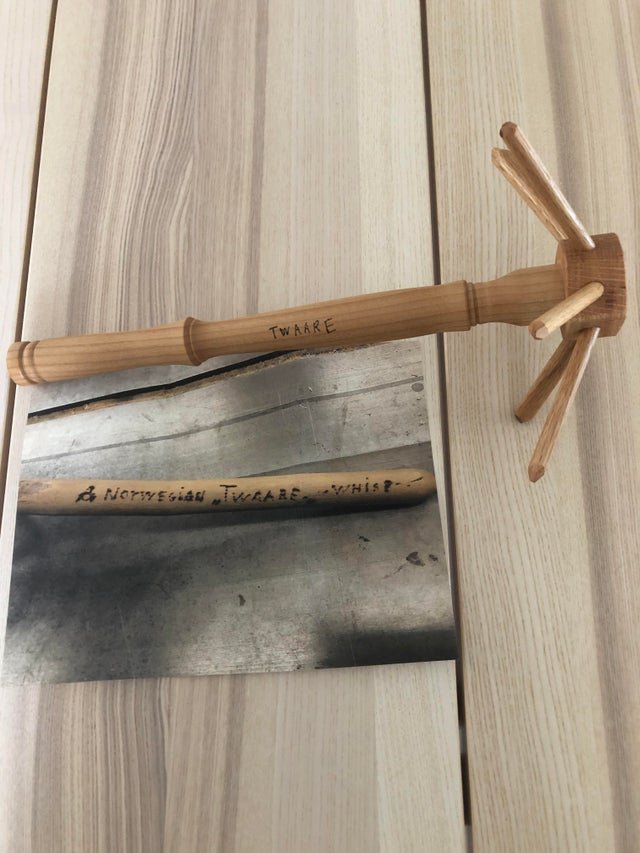 Has chef hat with a mustache but no other markings.
A: It is a wine opener called an Ah-So. 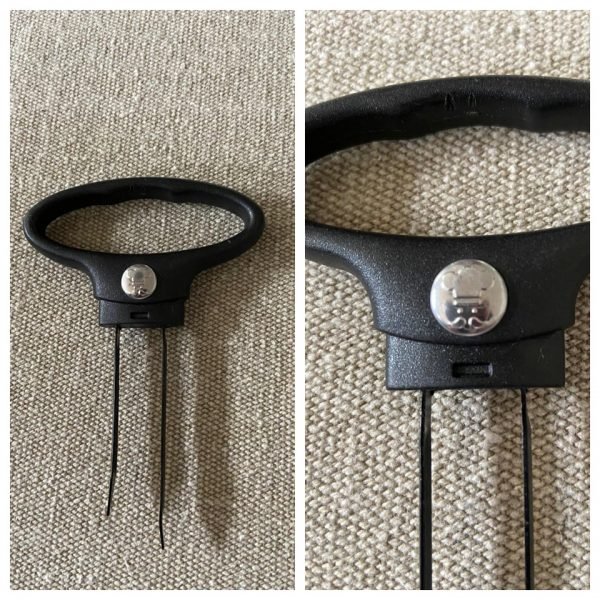 Found while cleaning the basement. The top of the handle says “O Cedar” so it has to be some ancient tool for cleaning, but what?
A: This is the handle of a duster. The replaceable duster slides down over the wires. 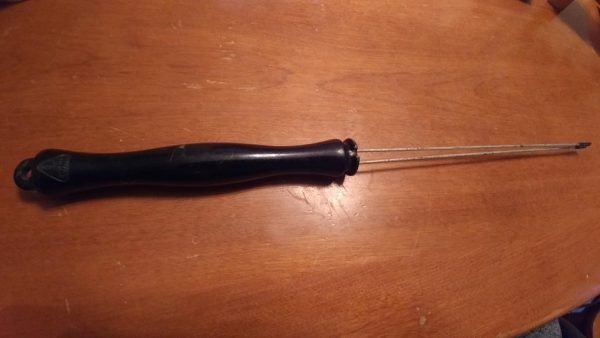 Found several of these in a room I don’t go in frequently. About 1cm long, and released a small quantity of yellowish fluid when cut open.
A: A cockroach egg case. 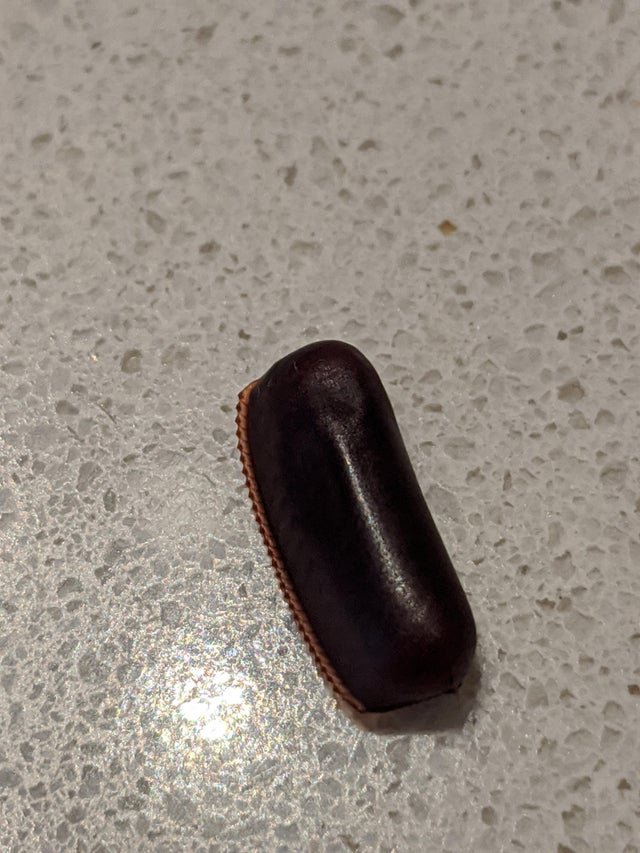 Some sort of throttle key maybe from some sort of yard equipment. Any idea of brand or type of tool or toy?
A: It’s a valve for a sippy/toddler cup. You start out with the tortoise then when they get older and used to drinking from the cup, you change it to the hare. 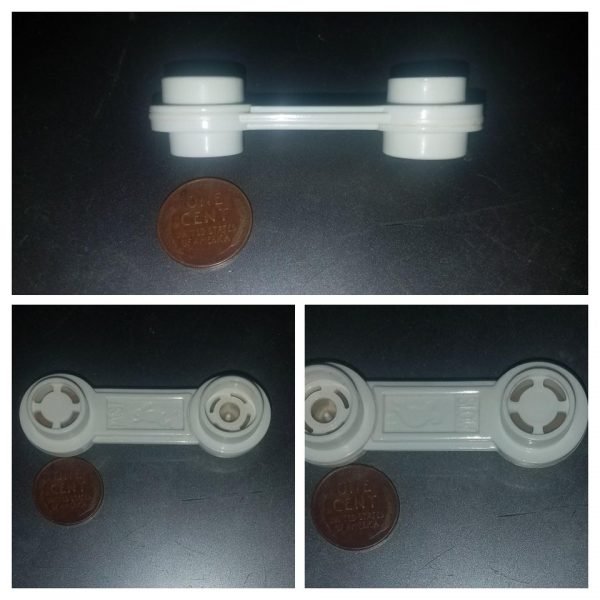 This is found to the right of the door on an old town house in York, England. It is conical, metal, the narrow end of the cone does not lead into the house, like it would if it were some kind of instrument to announce your presence to those inside the dwelling. A: It’s a cast iron candle suffer, aka link extinguisher. In a Korean music video. What is that thing in the corner of the room? It’s driving me crazy!
A: It’s an air conditioner. Central air isn’t a thing is a lot of Asia, and ducting can’t be added because the buildings are concrete (not much lumber over there), so they have these incredible free standing air conditioners. 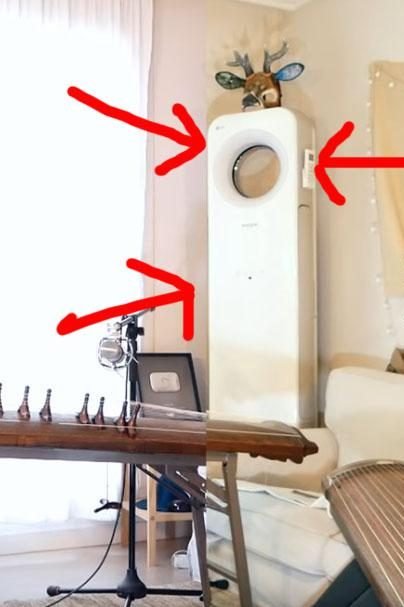 Odd stand on side of the road. What is it for?
A: For cyclists to rest against when waiting for the lights to change. 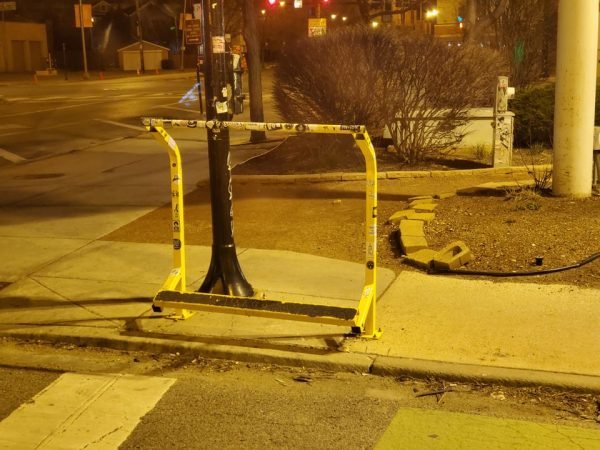 Found these in my oven. The manual doesn’t say anything about them. The pointy ends aren’t sharp.
A: Its for a rotisserie option. 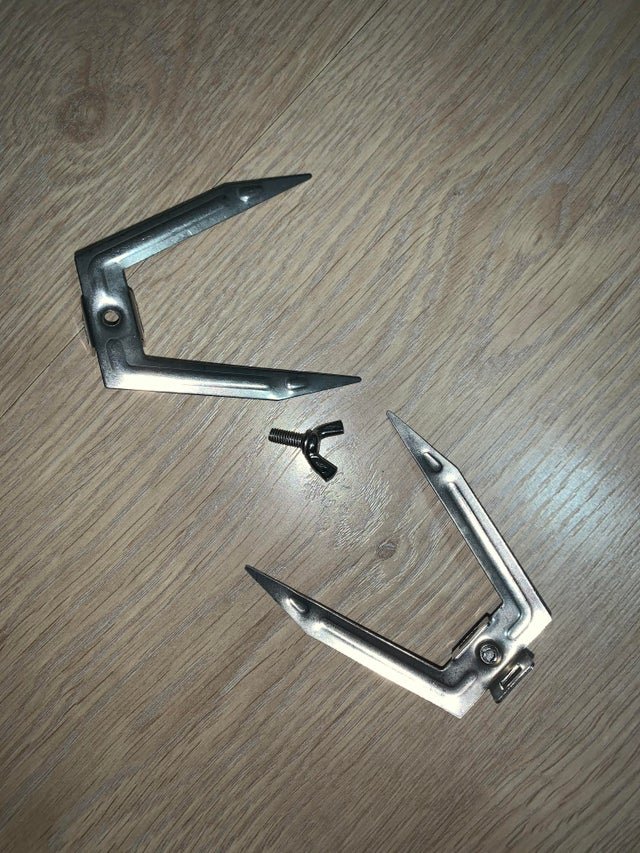 Another mysterious dresser pull-out.
A: Its to hold a clothes hanger with a garment. 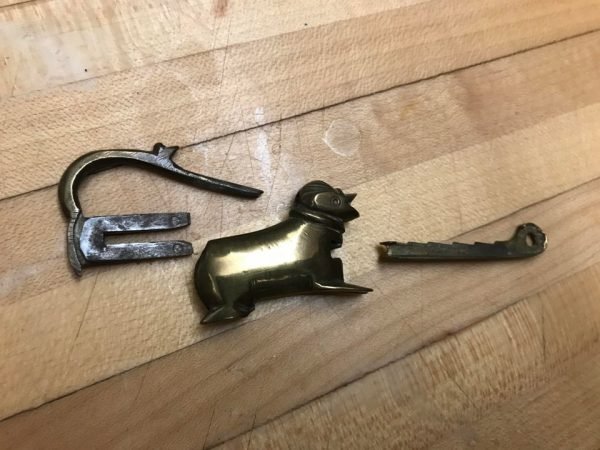 This was in my shed behind a mirror cabinet. This thing is sticky, the thing itself, and the plastic wrap. It had numbers that said “7086”. Showed this to my parents and they didn’t know what it was. This thing also came with a plastic tube.
A: Definitely an epoxy putty, normally if you knead it it’ll activate and behind to harden. 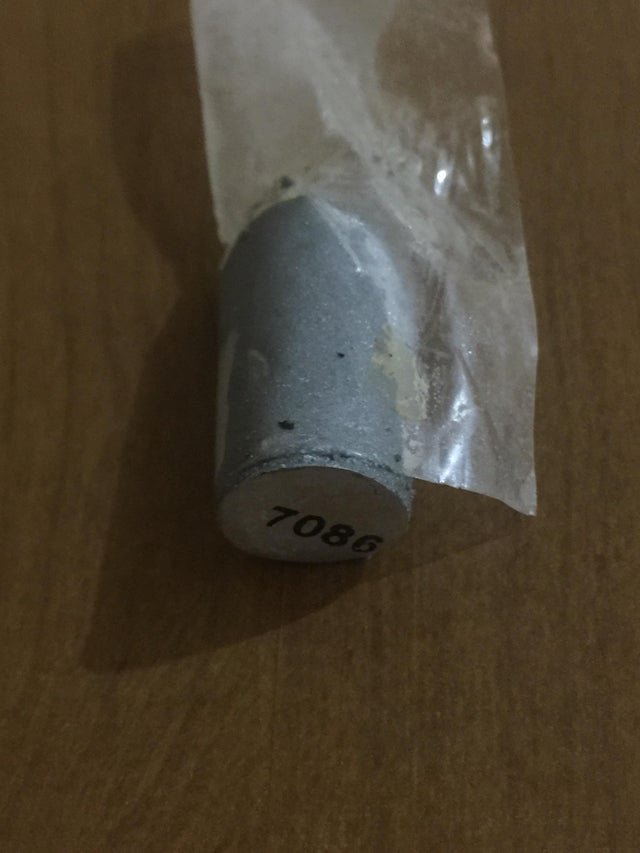 My neighbours drew this star on their doorstep which has a little drop of blood in it… Why?
A: Today is the Tamil new year day. So our families draw the kolam outside our door to welcome the new year and to feed the ants and other insects that eat the rice flour. In the old days (my parents and grandparents for instance), we’d draw the kolam every day after sprinkling water outside our house to make it cooler compared to the roads. This is a way to make guests feel welcome. The red mark would be kumkum (a kind of red powder). 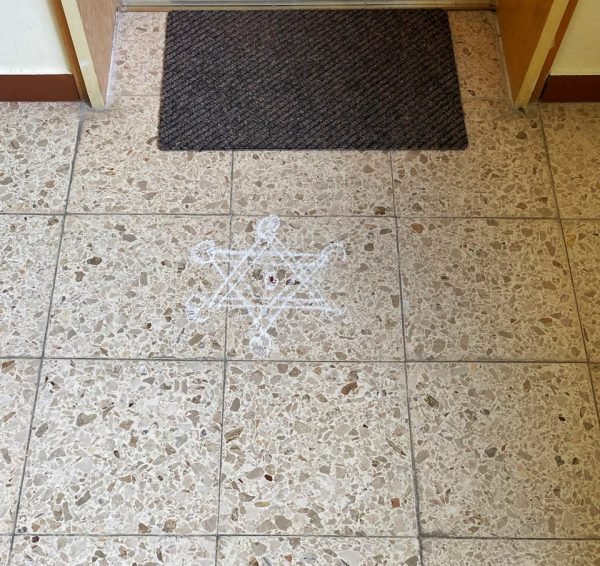 Any idea if this is an Asian inkwell or condiment holder or?? No writing just pictures etched in brass. 3 inches tall.
A: It is the base for a brass hookah. Previous Doctors From “ER”: Then VS. Now
Next 30 Funny Parenthood Memes