What Does Kenny Say in the ‘South Park’ Theme Song? 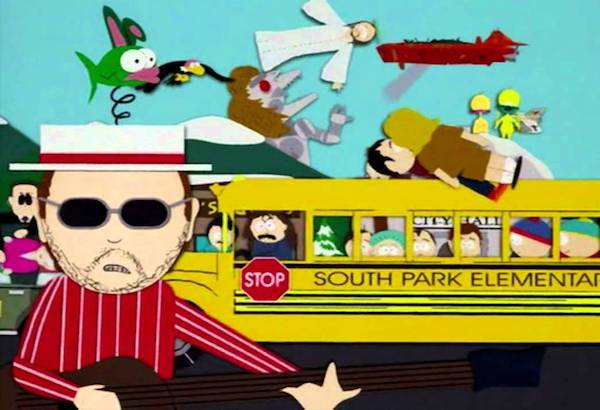 You don’t need to be a super fan of South Park to be able to recognize the the theme song. It’s iconic. Composed and performed by PRIMUS and sung by lead singer Les Claypool, it’s been pretty consistent over the years. The animation’s been updated, and the featured characters have been rotated around, but the subject matter and lyrics have been roughly the same. Except for Kenny’s lines.

Clad in his orange snowsuit, he says something in a verse that’s incredibly mumbled. All along, I just figured it was random nonsense, so I never thought anything of it. Boy was I wrong.

There’s a reason that Kenny keeps his hood on so tight. That little guy has got a potty mouth dirtier than the toilet in Transpotting. You know the one.

So… Kenny. No one knows what he says, what he even truly looks like and he dies in nearly every episode and somehow, comes back.

Minus that time that he dead for a while. Then we got Timmy, Jimmy, and Butters vying to the fourth of the group. Good times.

So, let’s undo the drawstrings and learn what kinds to NSFW shit he actually has to sing. Given that it’s muffled, the show never actually censors his words.

Unaired Pilot:
“Our town is bigger dammit, right down to the little granite.”

Personally, I think one is hilarious.

On account of Kenny actually staying dead for a while.

Season 10 Episode 8-Present:
“I like fucking silly bitches and I know my penis likes it.”

Ironically enough, Kenny’s a pretty decent Opera singer. There’s a whole series of episodes where he trains himself and goes to Romania to study.

So, there you go. Kenny’s a world-class, 8-year-old perv, and we love ‘im. Keep on mumbling.

Loading...
Previous 15 Celebrities At The Beginning Of Their Career And Now
Next 25 Low-key Terrifying Things