What The Heck Is That?

“Found these while renovating a house. They were thrown in the ceiling on the main level in a way that seems to suggest they weren’t supposed to be found.” 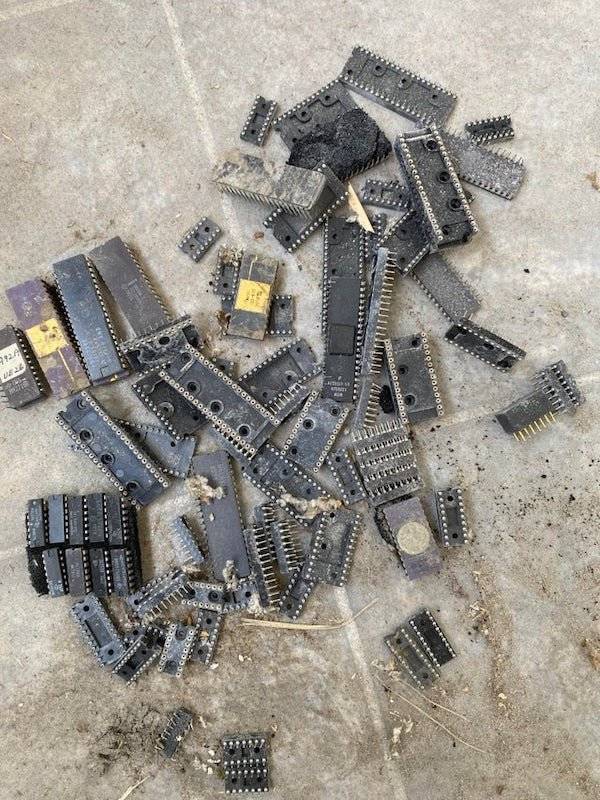 A: “They look like early 1st, 2nd, and 3rd generation intel Computer chips. one of them says Intel 78. Here’s a link. A few of them match up to what you have there. One of them is an 8 bit intel processor from 1972. Intel D8008. I see some AMD processors in there. Looks like they span from the early 70s to the 90s. I’m pretty sure I solved it…”

“Royal Mail truck with opaque, segmented roof (London). Why is the top like that? Does it have a purpose?” 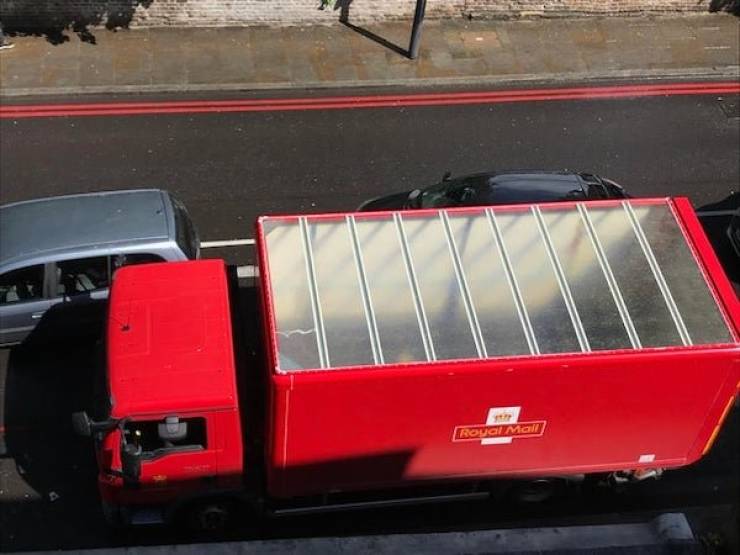 A: “So you can see what you’re doing when you’re inside the back. Cheaper than installing lights.”

“Strange metallic object found in my garden. Around 2in long”

“I just don’t this thing on the wall in my house. When I first saw it there was a red light brightening and dimming inside, what the heck is it??”

A: “Exterior wall? old cable entry and you saw the sun setting”

“‘I found this while walking in a creek. Me and my friend thought it was a cannon but after cleaning it, not sure what it is. It is made of iron and about 25 lbs. it is about a foot long and the whole in the middle is about 3 inches in diameter. Nothing appears to be written on it.” 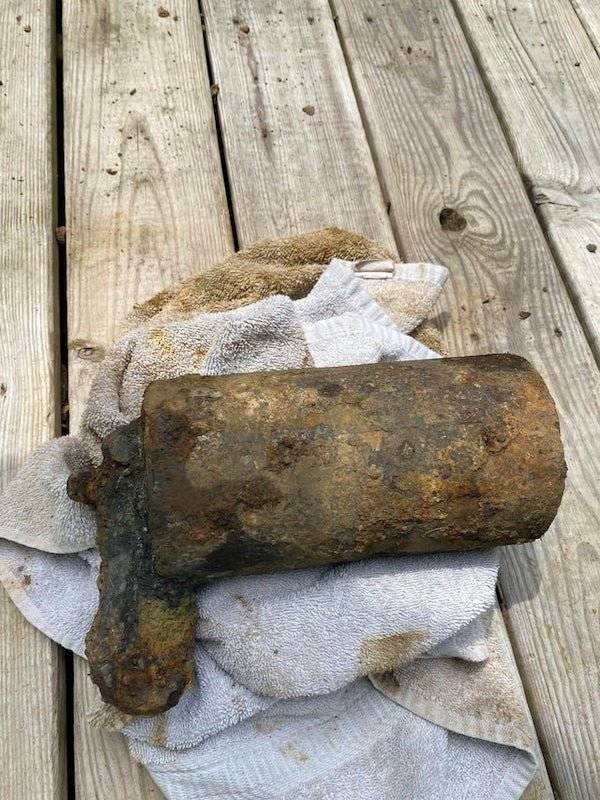 A: “If you can soak it in some vinegar for a few hours that will knock the rust off of it and might reveal some letters or manufacturing marks. Lemon juice works too.”

“What is this thing that is played here?” 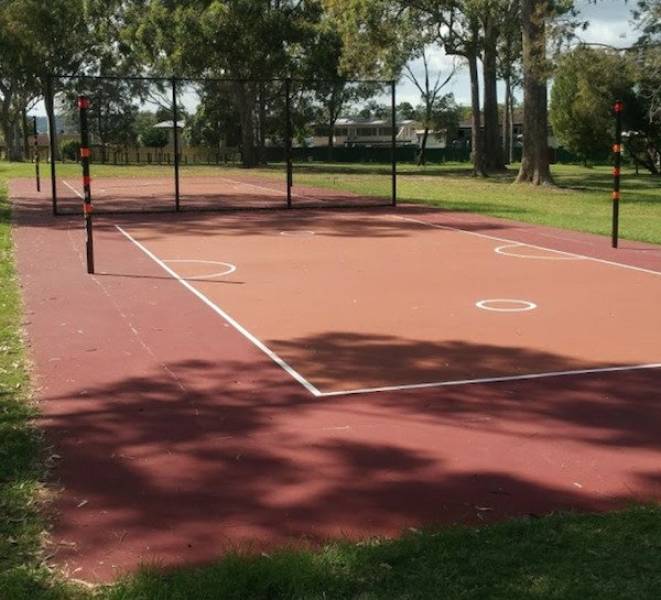 “Found in a house along with lots of old maritime artifacts. What is it called and how was it used?” 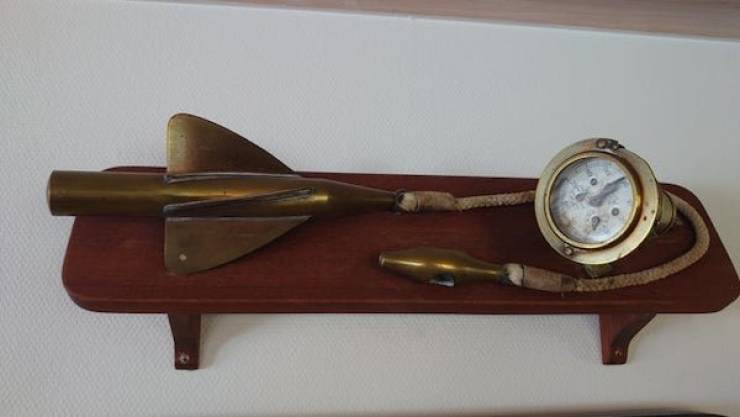 A: “Knot gauge/ speed log. Basically a boat speedometer. The propeller looking object is in the water, spinning as the boat moves, the rope spins and moves the dial, letting you know the speed as indicated on the dial. ( the rope length can be varied to a certain extent ). P.S some antique ones are worth good money.”

“What is this brass coil on a post in my basement?” 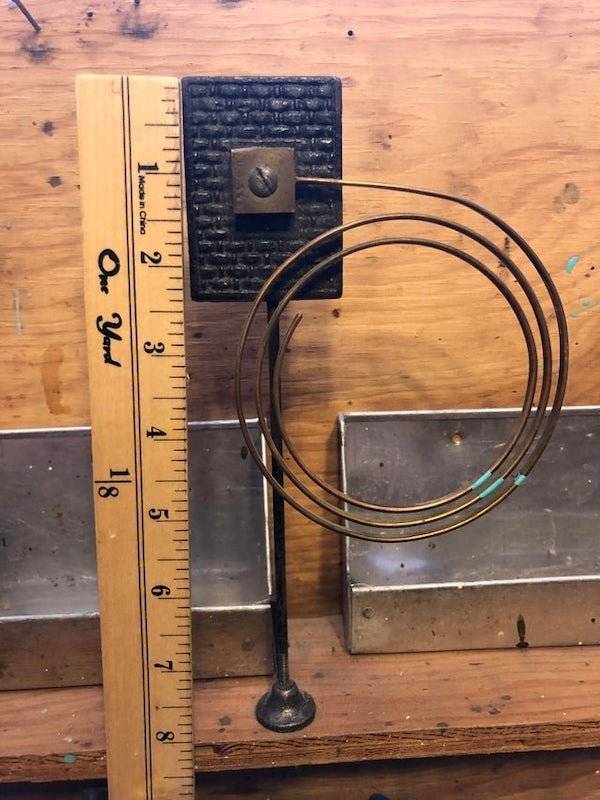 A: “It looks a lot like a chime from a clock. I see nearly identical ones in grandfather clocks I restore all the time. They come in various forms.”‘

“Im waiting for the bank to open and they have this card facing the street. What is it used for?” 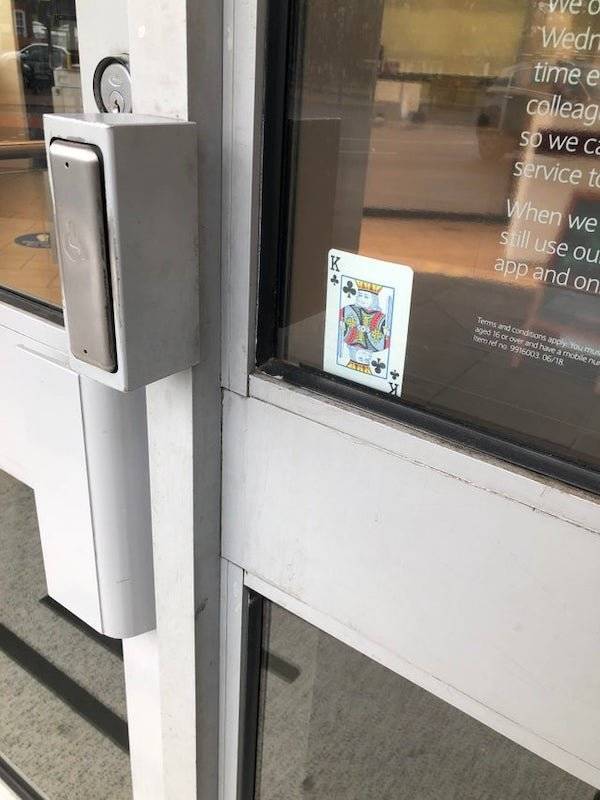 A: “Former bank employee here. It’s definitely a safety signal. We switched ours quarterly and it is to let other employees know that it is all clear to open. Typically we had 2 employees “open” the branch while the rest waited in the parking lot or across the street for “all clear.” The openers go in, turn off alarm, search the building and check everything then set the signal.”

“Found this in a store, it’s made of plastic with a funnel attached to the handle. Looks likes a holder of some sort, but don’t know for what exactly…..plus the funnel is puzzling me. Employees were no help, no one knew what it was. Please help!” 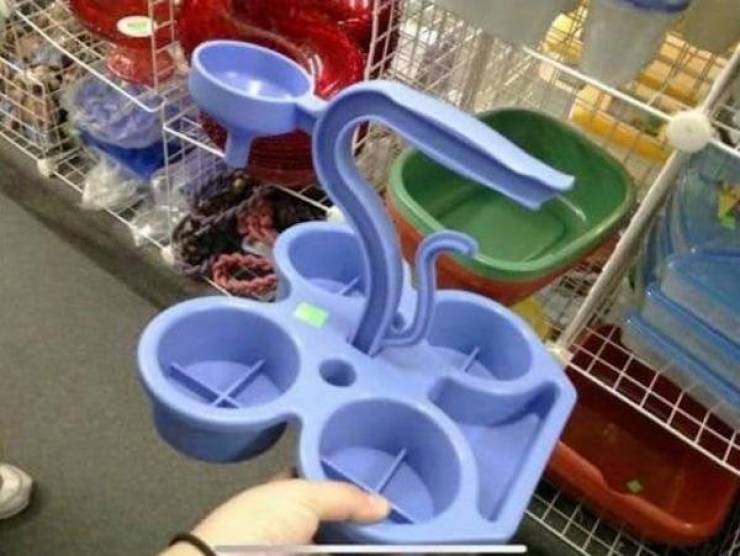 A: “It is a caddy for carrying cleaning supplies/bottles. the funnel is used to refill refillable spray bottles.”

“What are these aluminum cans for? I work in a recycle facility and we recently got hundreds of these unlabeled aluminum cans. They are 5.5” tall and 2” wide, with a push on top.” 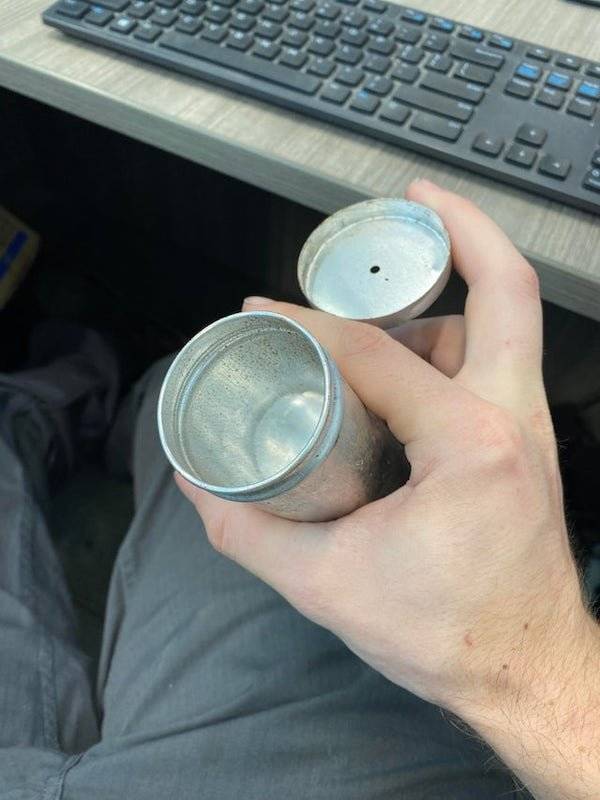 A: “Coronavirus test kit component, mostly used for pipette tip disposal. Could be a biohazard, and I definately wouldn’t be holding that with your bare hand, but I’m also doubtful a lab handling biohazards would be so careless as to recycle them. Probably these were from expired kits.”

“Purchased at a bazaar in Afghanistan. Hollow inside and the “cork” top doesn’t seem to come out. Made of metal.” 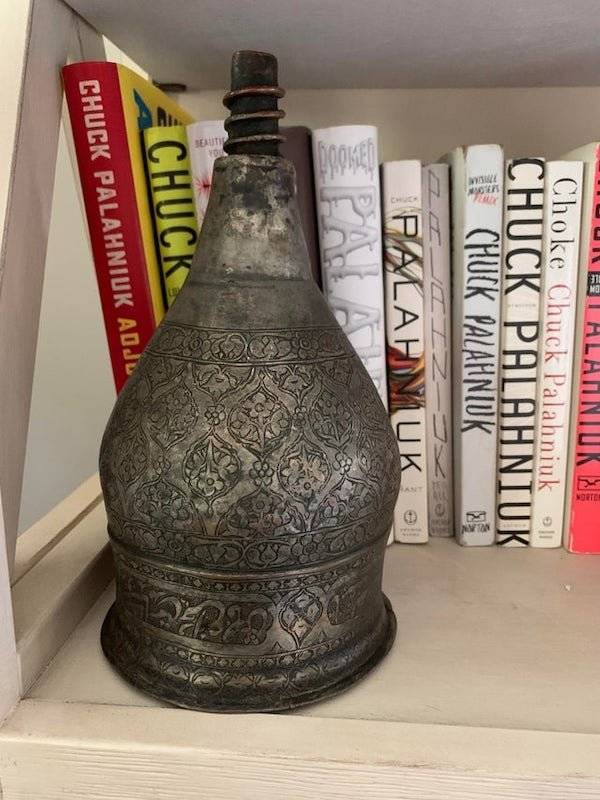 A: “Well I can tell you it’s upside down, judging be the writing on the side. It’s an oil lamp.”

“Found this in my new home in the kitchen. It doesn’t smell, doesn’t taste like salt or sugar, is hart, disolves in water and gets soapy when licking it. I thought that it might be salt for dishwasher but I’ve never seen one like this” A: “It’s for the dishwasher. In the future, not a good idea to put something you’re unsure of in your mouth…”

“Short table/desk with an opening on the front, a fence on the back, and storage on both sides. Roughly knee height, found on the streets in LA.” 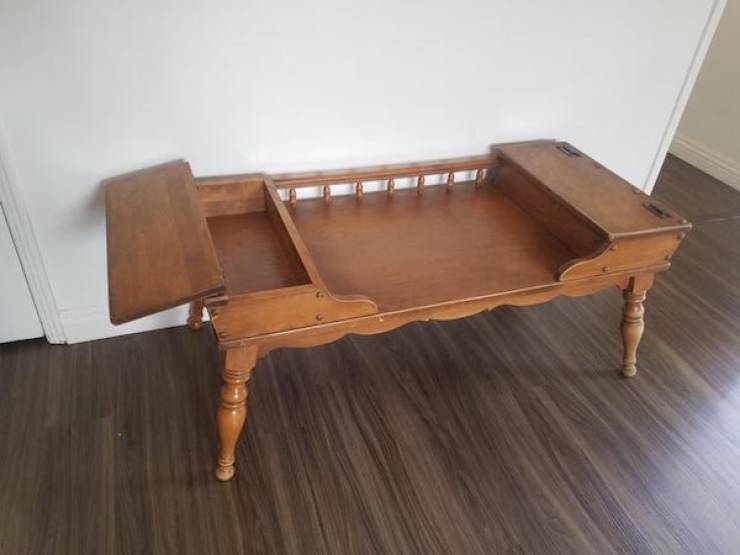 A: “Coffee table. We had one growing up that looked just like this.” 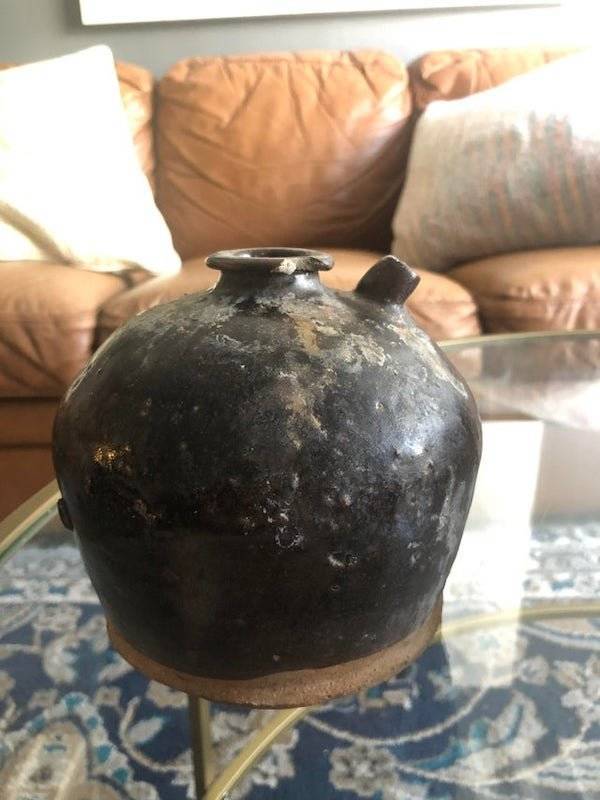 “What is this wooden stick thing? We recently bought a house and the old owner must have left this behind. Assuming to do something with the oven since it was hung there. No notable markings.”

A: “You use it to pull out and push in the oven racks”

“Found on the side of a road – rural area with high Farming traffic. The springs don’t seem to do anything. Quite heavy for its size, about three inches long and 1 inch across” 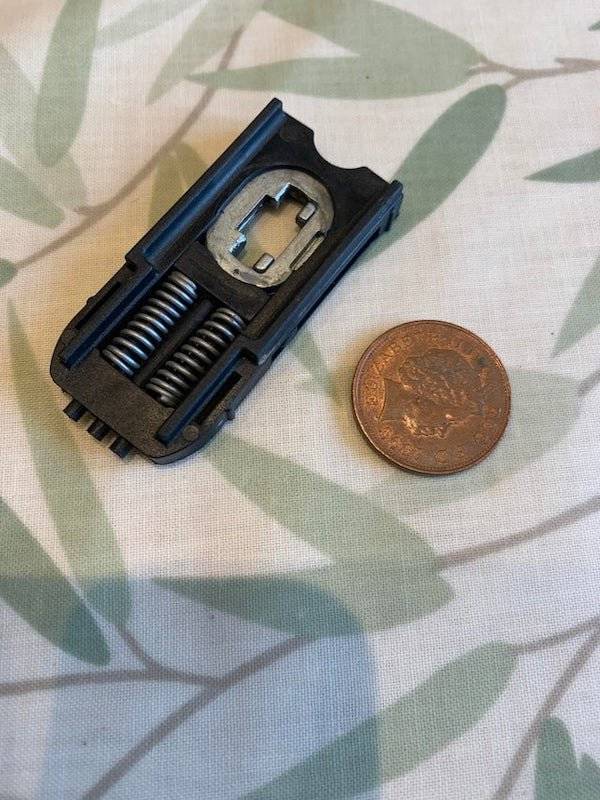 A: “It’s part of a locking /latching mechanism. The rest of it is missing. It’s hard to say which one or kind because there are so many. I used to do lock work and it looks very much like that type of mechanism.”

“What is this V-shaped scoring? Found in Germany” “Found in the backyard of a house we’re buying. No idea what its intended purpose is, or if it’s still functional?” A: “Grilling station. Looks like you’d drop a Big Green Egg in that hole.” 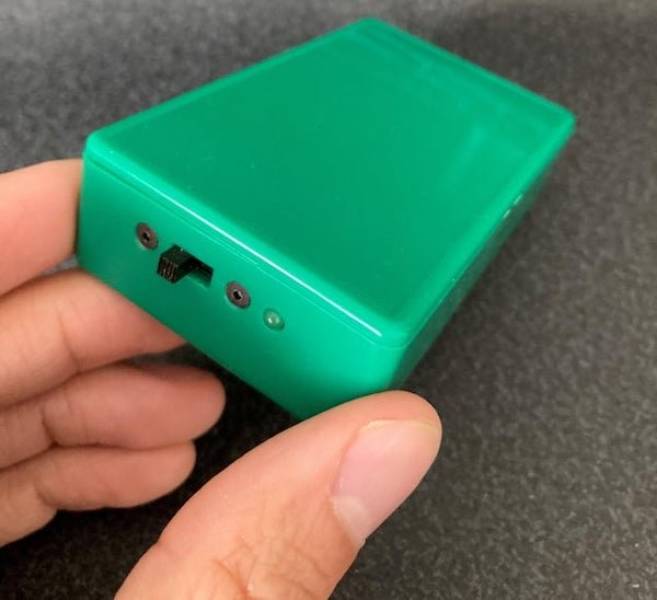 A: “It has to do with Orgone. Basically, the transfer of energy is supposed to help heal you but many people think it’s woo-woo hippie garbage.”