Where Do Monsters Come From?

The modern idea of gremlins can be linked back to British RAF pilots during WWII. Mechanical failures on planes would often be credited as sabotage by the mythological creature. The word Gremlin derives from a combination of Fremlin beer (a favorite among RAF pilots) and Grimm’s Fairy Tales.

The Grim Reaper and his Scythe

Early depictions of Death show him using swords and other tools when collecting the dead. During the Middle Ages, scythes were regarded as more efficient for reaping crops… and souls.

In America, many believe the staple witch hat comes from Quaker headgear. In the mid-18th century, when the myth of the witch started to spread in the U.S., Quakers were believed to practice witchcraft. Other origin stories suggest the relation stems from either the Judenhat worn in 1215, or the hats worn by beer masters in Europe around the 15th century.

During the 1600s warts were considered the Devil’s Mark. Warts were also believed to be an extra nipple used to feed a witch’s familiar.

Originating in Greek Mythology as bird-women, Sirens would use their irresistible songs to feast on sailors who could not resist their seductiveness. Tales of Sirens began to resurface in Europe during the Middle Ages as a symbol for the dangerous temptation embodied by women. Only this time, instead of birds, they were fish.

Credit for the slow-moving style of zombie is often given to George Romero’s Night of the Living Dead (1968). Romero thought the corpses should still have some sort of rigor mortis after being awoken, and the idea stuck.

1985’s Return of the Living Dead is also credited for common beliefs of zombies. The movie explains that zombies feel themselves rotting, and eating brains “makes the pain go away”. 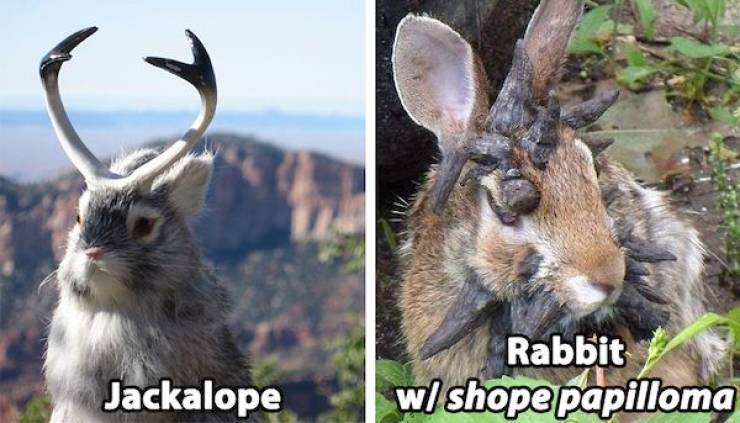 The legend of the Jackalope comes from rabbits infected by the Shope papillomavirus. The virus creates cancerous tumors that can appear to resemble antlers.

Voodoo Priests used a chemical called tetrodotoxin (the toxin in pufferfish) to put victims into a zombie-like state. These ‘zombies’ could have been where the legend originated from.

The myth of the ‘stiff corpse vampire’ might have to do with the way bodies were transported during the Qing Dynasty. Corpse drivers would transport the deceased with a coffin hung on their shoulders. Due to the flexibility of the bamboo, the dead could appear to be bouncing on their own when seen from afar.

In Irish myth, a banshee’s scream foretold a death in the house and can be linked to ‘keening’, or traditional funeral wailing. Banshees themselves weren’t malicious, but acted as a sort of morbid patron spirit.

In Medieval art, the entrance to Hell was often depicted as a monster’s giant mouth, belching fire and smoke. Dragons (considered Satanic creatures at the time) started breathing fire after that idea of Hell became widespread.

The sticky, crystal-filled, fog-emitting blob was reportedly witnessed falling from the sky by two Philadelphia officers in 1950. The FBI was called, but it “disappeared” before the federal agents got there.

Some say vampires are sensitive to silver because Ambrogio, supposedly the first vampire, was cursed to be burned by its touch. On top of that, mirrors were originally backed with silver, which led to the theory of vampires not having reflections.

The popularity of vampires sleeping in coffins comes from the Middle Ages. Graves could occasionally be found with claw marks on the inside of the coffin from people experiencing Catalepsy (loss of consciousness and rigidity of the body) and trying to escape after being buried alive.

Previous 28 People That Can Sleep Anywhere!
Next 20 Jobs That Were Popular In The ‘50s And Are Currently Dying Out