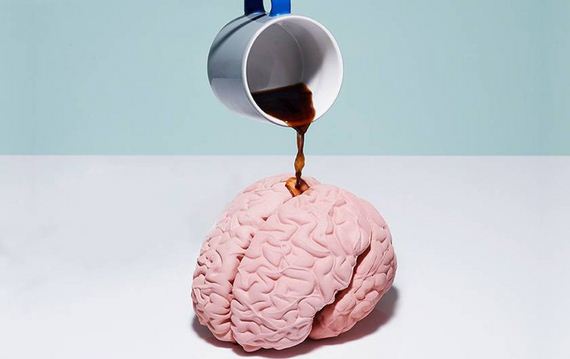 For many of us, coffee is our best friend. It’s there in our times of need, whether a cold weekday morning or during an all-nighter. Coffee is warm, reassuring and keeps up sharp. But do we really know what coffee is doing to our brains? Fortunately science can tell us! Did you know that scientists are the biggest coffee drinkers of all? So scientists are bound to know more than a thing or two about the magical effects of coffee. 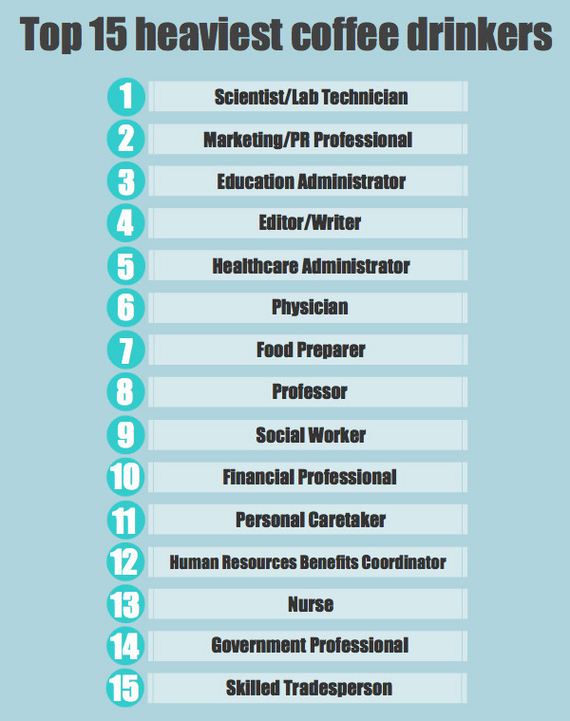 1. This is what caffeine, the chemical, “looks” like.
The shape of caffeine is similar to an important molecule called “adenosine” that regulates brain function (pictured below). Caffeine “mimics” adenosine and binds to the same targets in the brain. 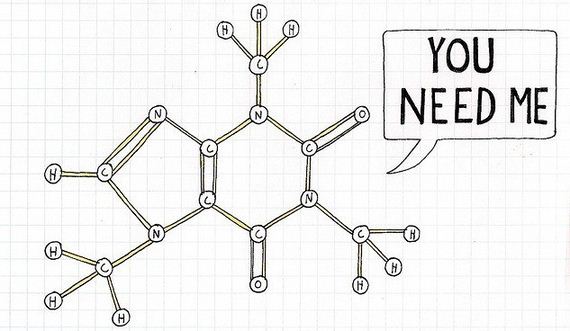 2. Caffeine looks like this when viewed from an electron microscope.
Caffeine naturally forms tiny crystals, about 0.0016 inch in size. This picture won a science photography award in 2012 for creatively showing an “everyday thing from a different, at first unrecognizable, perspective.” 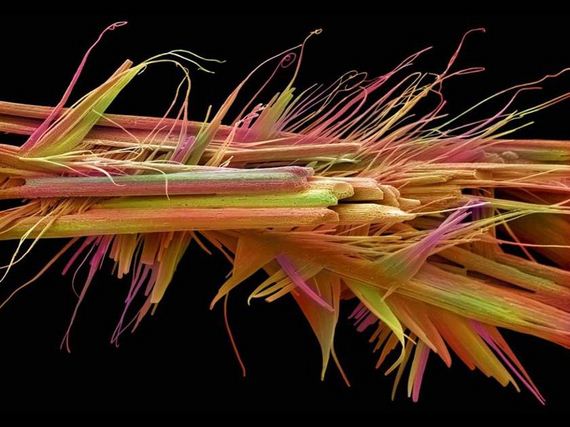 3. These are the best times to drink coffee.
That’s because we’re all guided by a 24-hour biological cycle, known as the circadian clock. When you first wake up your brain is already flooded with cortisol, a natural chemical that helps to keep you alert. So although you might feel like a coffee, you don’t actually need one. Best to wait until cortisol levels drop later in the day.

4. Once you do take a sip, it takes only 10 minutes or so for the caffeine to kick in.
After as little as 10 minutes, the caffeine concentration in your blood reaches half the maximum concentration, which is enough to have an effect. The caffeine reaches maximum levels, making you most alert, after 45 minutes. Depending on how fast or slow your body’s able to break down the drug, you could feel the effects of caffeine for 3 to 5 hours.

5. Caffeine works by blocking the effect of the brain’s natural regulator, adenosine.
During the day, your brain naturally builds up its levels of adenosine. When they reach a threshold concentration, they bind to special receptors that react by start firing instructions to make your body sleepy. Remember how caffeine has a similar shape to adenosine? This means that it can bind these very same receptors, blocking the natural effect of adenosine. This allows the brain’s stimulants to work unimpeded, keeping you up and alert.

6. Caffeine affects your brain much differently than beer. 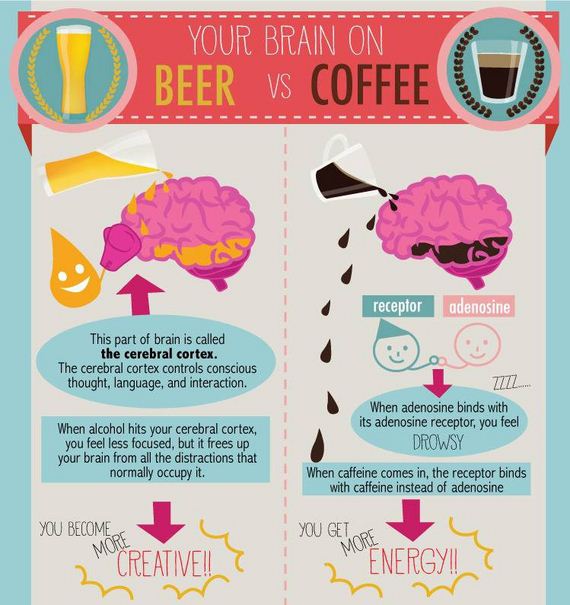 7. In addition to caffeine, there’s lots of other stuff in coffee that may be good for your health.
That’s because coffee also contains hundreds of different compounds. These include many antioxidants that protect our bodies from damaging chemicals called “free radicals.” These molecules cause aging and are associated with illnesses such as cancer and heart disease. NIH studies show that coffee drinkers have a reduced risk of Alzheimer’s, Parkinson’s, type 2 diabetes and many other diseases. There’s a caveat: Many coffee drinkers are also heavy smokers, heavy drinkers and red meat eaters, all things that are detrimental to your health. This means that the data above is adjusted for these risk factors, so you should avoid these habits if you want coffee to have a positive effect. 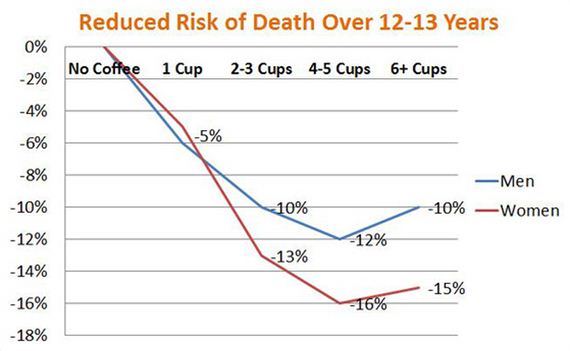 8. Bees also love caffeine, and it helps their brains too!
he nectar in some flowers has low levels of caffeine, which is used to attract bees by creating a drug-induced buzz that keeps the bees coming back. The caffeine is good for the bees too. Recent studies have shown that caffeine can help enhance the long term memory of bees. 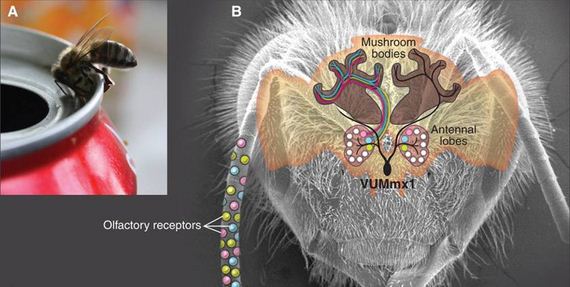 9. Your brain can become unhealthily addicted to caffeine …
As you might expect, the brain is clever and not so easily tricked. In reaction to caffeine blocking all of its receptors, the brain makes even more of them so that adenosine is still able to bind its target. This means that over time, the chemistry of your brain changes so that you’ll need to drink more and more coffee just to have the same effect.

10. … Which means that you can have horrible caffeine withdrawals.
Caffeine is a stimulant to the central nervous system, and like other drugs, regular use of caffeine can cause a mild physical dependence. Caffeine withdrawal is now recognized as a mental disorder. So consume carefully. 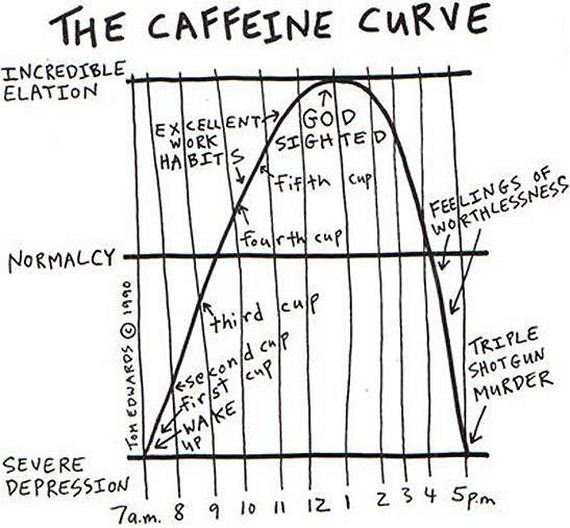 11. There are a whole bunch of side-effects.
Quitting caffeine suddenly can cause headaches that last up to nine days. For those who want out, doctors recommend reducing consumption gradually over a period of four weeks. 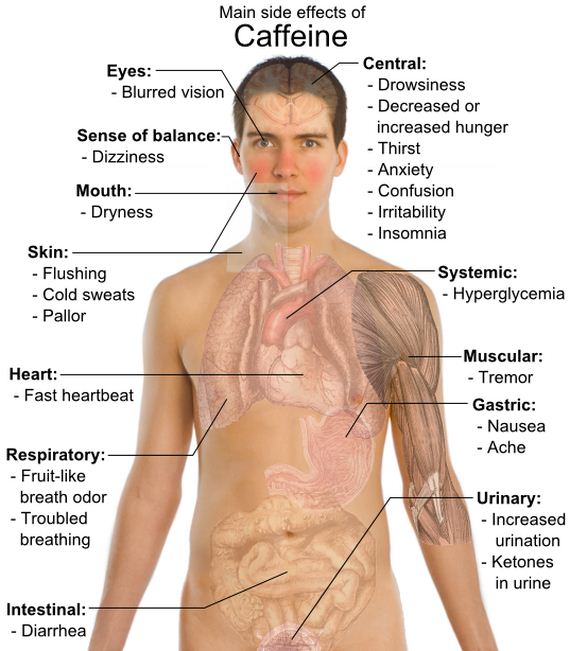 12. Caffeine isn’t too great for spiders either.
In 1995 NASA tested the effect of various drugs on the ability of spiders to spin webs. As you can see the result is quite striking. Spiders can’t metabolise caffeine as well as humans, so they are much more affected by the drug. 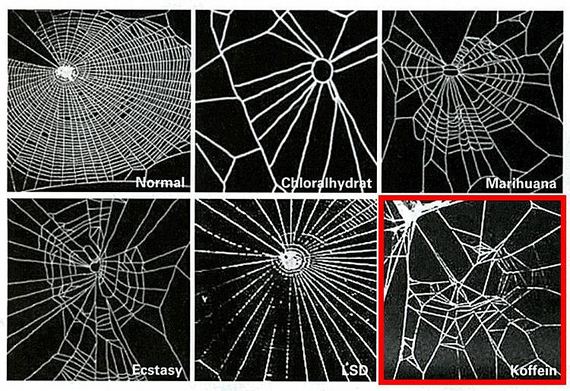 14. And don’t forget to watch those calories! 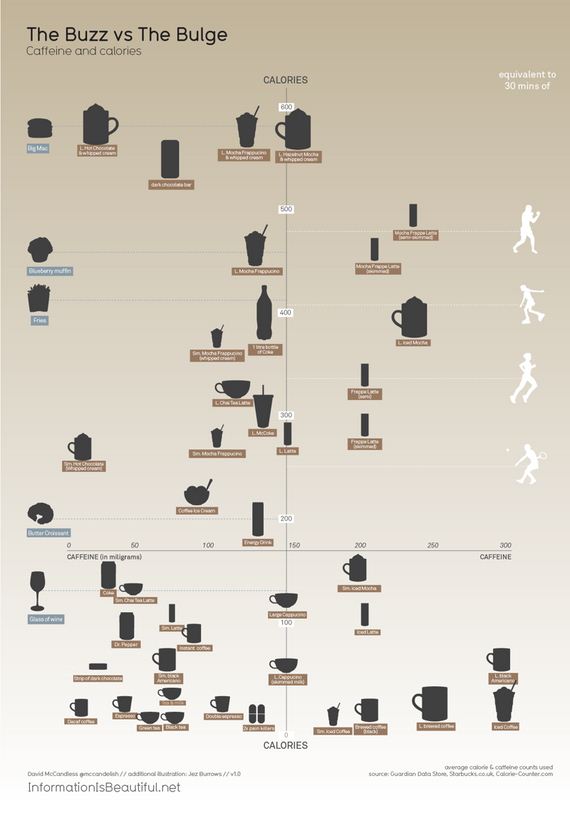 Previous Take This Dose Of Motivation
Next It Was A Routine Free Fall Dive…Until The Unthinkable Happened. This Is A MUST See.