15 Famous People Who Are Related To Historical Figures

Beyoncé Knowles is the 25th cousin of Queen Elizabeth II. 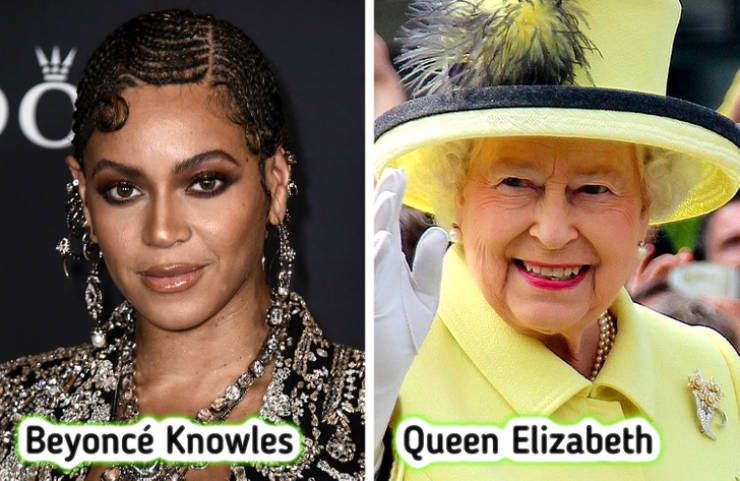 Beyoncé Knowles, well known for being music royalty, has royal blood running in her veins too. She is the 25th cousin to Queen Elizabeth, once removed since they both share King Henry II as a common ancestor.

Angelina Jolie has lineage from King Phillip II of France. 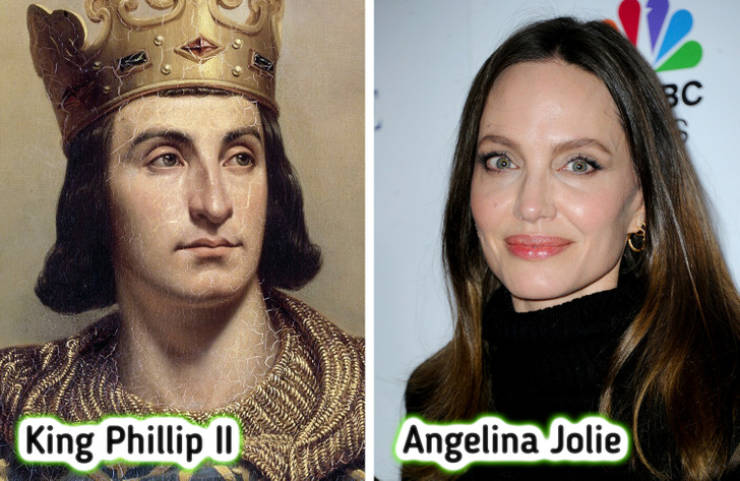 King Phillip II of France ruled from 1180 to 1223 and is known to have brought financial stability to his country. He also increased the royal coffers. Actress Angelina Jolie carries French royal blood considering she is a direct descendant of Philip II. Strangely enough, she played Queen Olympias in the 2004 movie Alexander, opposite Val Kilmer’s Phillip II, only this was Phillip II of Macedonia.

Brad Pitt is a descendant of King Henry II of England. 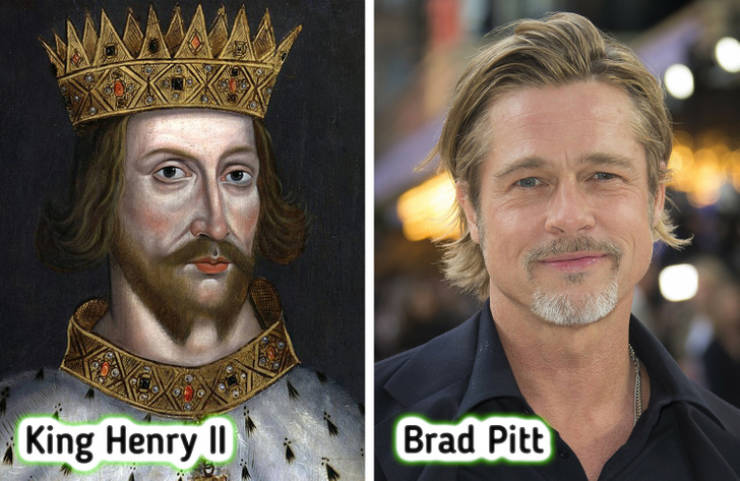 Brad Pitt is no less royal either. He can trace his ancestry back to King Henry II of England, who ruled from 1154 until his death in 1189. Coincidentally, King Henry II’s wife, Eleanor of Aquitaine, was first married to French royalty, making Brad Pitt and Angelina Jolie somewhat predestined to a failed marriage. This also makes Pitt a 25th cousin, twice removed, to Queen Elizabeth. 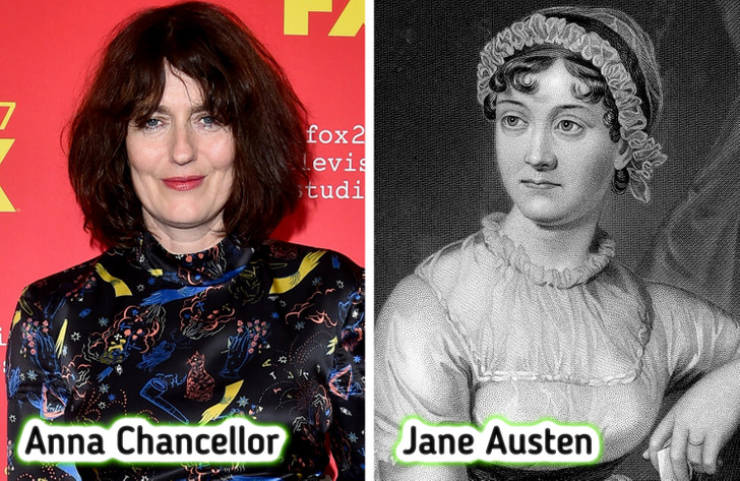 In 1995, Anna Chancellor starred as Caroline Bingley in Jane Austen’s Pride and Prejudice BBC Miniseries. But she has a deeper connection to Jane Austen as well. The highly venerated author is an 8-time great aunt to Chancellor. 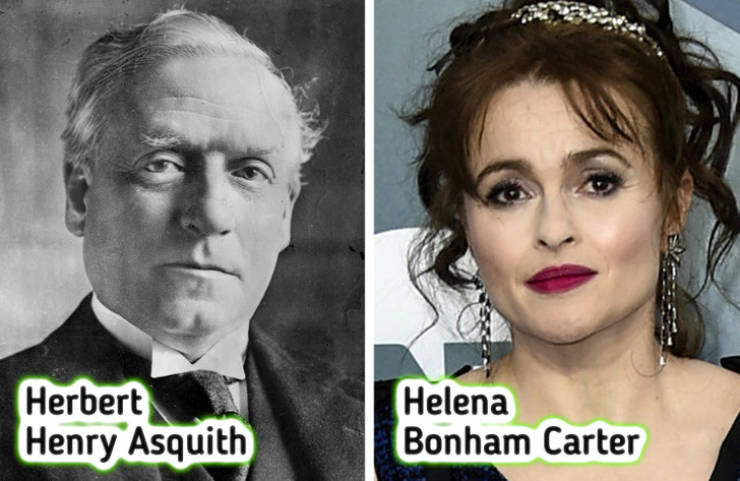 Helena Bonham Carter is best known for her off-the-beaten-path roles, like that of Mrs. Lovett in Sweeny Todd: The Demon Barber of Fleet Street. But she comes from illustrious family background. Herbert Henry Asquith, the Prime Minister of the UK from 1908 to 1916, was her paternal great-grandfather. She is also related to Jane Austen, and subsequently to Anna Chancellor.

Harry Lloyd is a descendant of Charles Dickens. 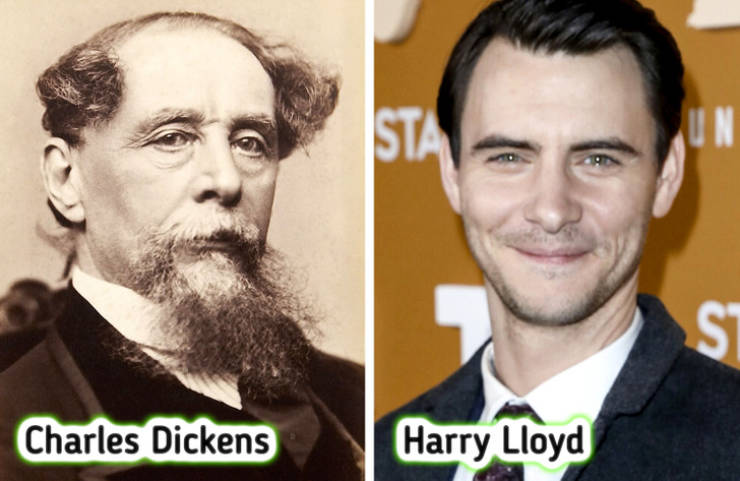 Harry Lloyd, who plays Viserys Targaryen in Game of Thrones is the great-great-great-grandson of the famous Charles Dickens, the author. Lloyd’s mother, Marion is the descendant of the seventh child of Dickens, Henry Fielding Dickens, who in turn had 5 children.

Benedict Cumberbatch is the 16th cousin to King Richard III. 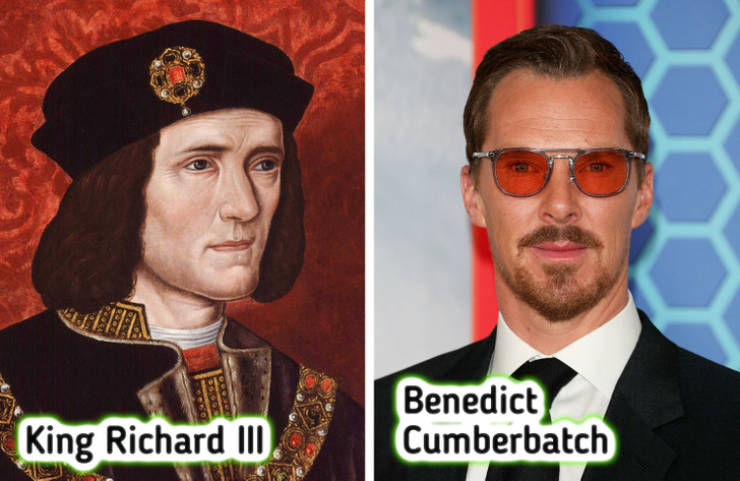 Benedict Cumberbatch is distantly related to King Richard III, who ruled England from 1452 to 1485. He was the last English king to have died during a battle, and later, there was a whole investigation into finding his remains, enough for a reburial. Cumberbatch, who plays Doctor Strange in the Marvel movies, is the 16th cousin to the king. He also read a poem at his royal ancestor’s reburial.

King Henry I is the ancestor of Sigourney Weaver. 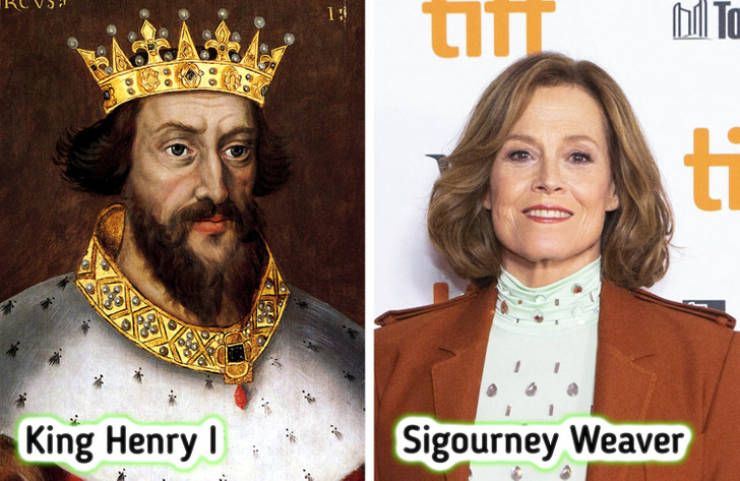 There seem to be many celebrities who can trace their lineage right back to English kings. King Henry I, who ruled from 1100 to his death in 1135 may have died without a male heir, but his bloodlines spread far and wide. Actress Sigourney Weaver, known for her role in Alien, is a descendant of Henry I, and this also makes her the 24th cousin of the Queen, once removed.

Jake Gyllenhaal has antecedents back to King Edward III. 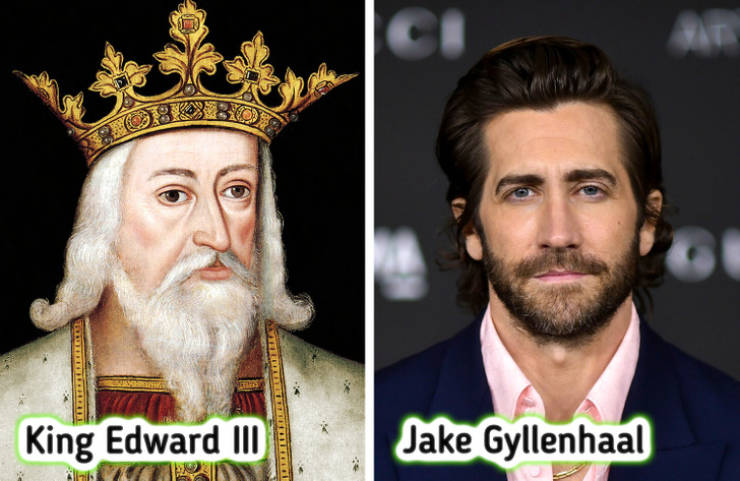 King Edward III ruled the English from 1312 to 1377 and is known as a rather conventional king, who pursued warfare but could also show great clemency. There are many celebrities who can claim blood relations with him, including Maggie and Jake Gyllenhaal. Others include Michael Douglas, Hillary Duff, and more. 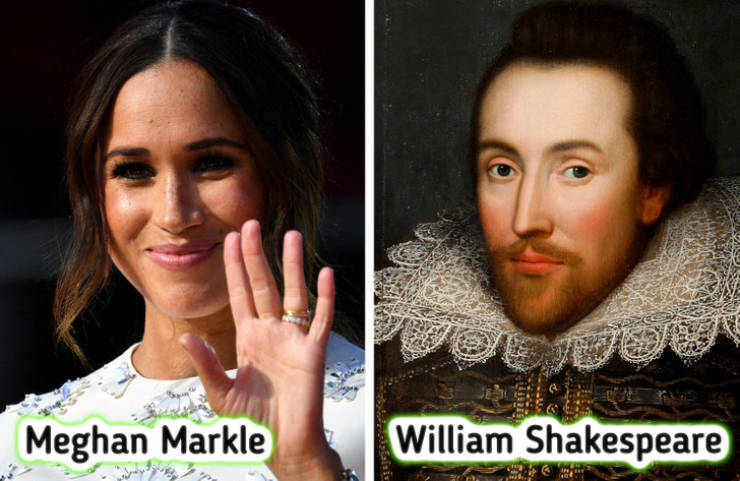 We know Meghan Markle is related to the British Royal Family, by way of her marrying Prince Harry, the Duke of Sussex. But she already has famous blood in her veins, considering she is cousins with the great playwright, William Shakespeare. Markle is a fifth cousin to the Bard, 12 times removed.

Ozzy Osbourne is related to Tsar Nicholas II, and more. 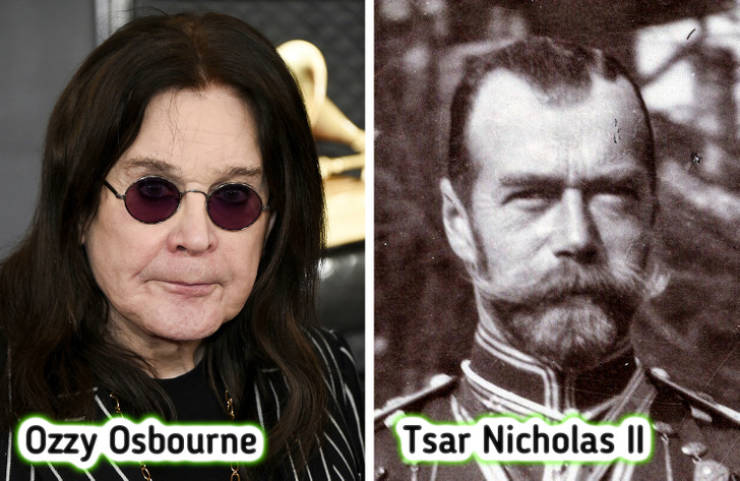 Then there is Ozzy Osbourne, and DNA might prove there is a method to his madness. Researchers say that the singer is not just a descendant of the Neanderthal man, but also a relative of outlaw Jesse James. But his claim to royal fame is with the last Russian Tsar, Nicholas II, whose entire family was wiped out in the revolution.

Cary Elwes is a descendant of infamous miser John Elwes. 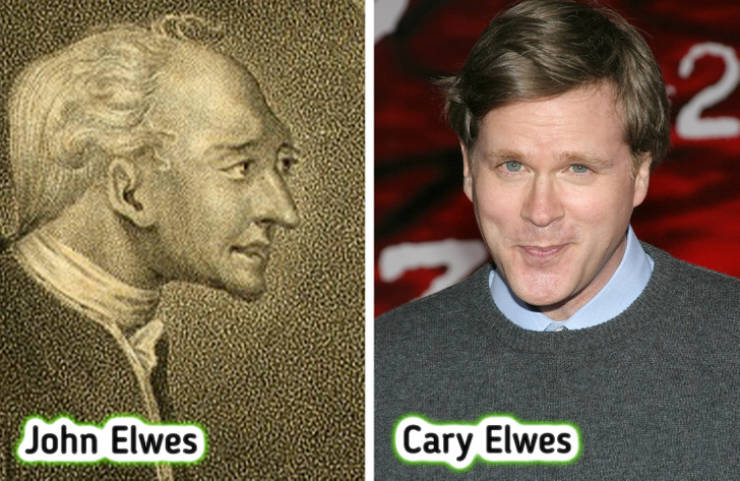 Actor Cary Elwes is related to John Elwes. As a man, John Elwes may have been unremarkable except for the fact that he was an extreme miser. It is also alleged that he was Charles Dickens’s inspiration behind the miserly character, Ebenezer Scrooge, in the classic A Christmas Carol.

The Deschanel sisters are related to Louis IV of France. 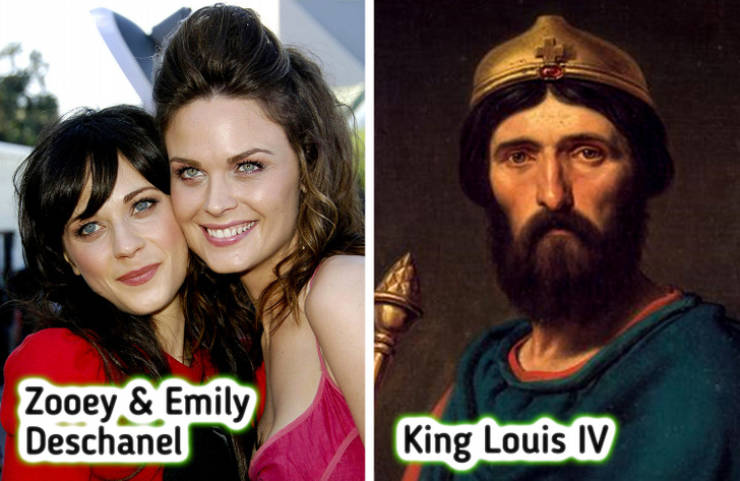 Zooey and Emily Deschanel have both made their names in Hollywood. Zooey is the star of the series New Girl, while Emily Deschanel was the heroine of Bones. And both can lay claim to royal French blood, all the way back to King Louis IV of France, who ruled from 936 to 954. 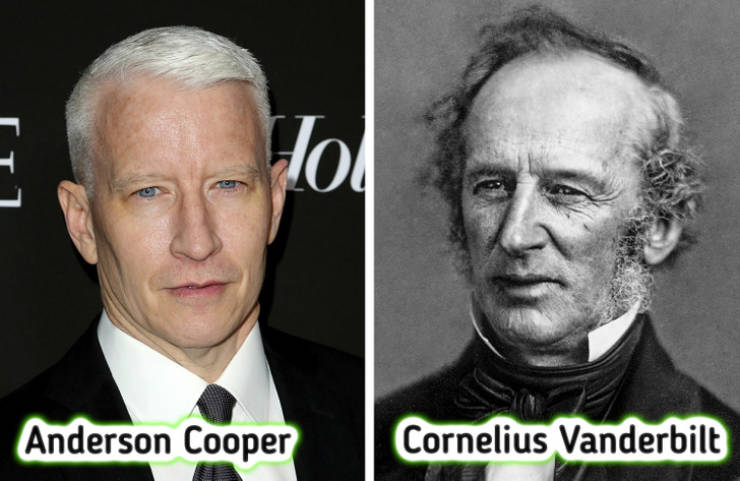 Anchor and host Anderson Cooper is the great-grandson of Cornelius Vanderbilt, the shipping and railroad magnate whose familial wealth was once more than the US treasury. His mother, Gloria Vanderbilt was the granddaughter of Cornelius, but Cooper remembers deciding to start work early, considering the family fortunes were much diminished by the time he was in his teens.

Robert Pattinson is a descendant of Vlad the Impaler. Robert Pattinson may have played the love-sick vampire, Edward Cullen, in the Twilight series, but he has a real-life blood connection to “Dracula.” Bram Stoker’s famous character was allegedly inspired by the Transylvania despot, Vlad the Impaler, and Pattinson is related to him, via the British royal family.