While we were trying to make a list of specifically horror films for this list, we decided we had to branch out a bit – as sports horror (sometimes listed under the subgenre “sporror”) was quite limited to b-movies and even c-movies. So, switching our search to thrillers made it easier to add a few better-quality films.

As Rayburn struggles in his first season with the team, Renard takes it upon himself to help Rayburn get back to playing at an MVP. Renard is not helping him out by doing his cooking, picking up his dry cleaning, or giving him rollover betting tips – no it involves much more nefarious behaviour, eventually devolving into psychopathic tendencies. Overall, it is quite the movie on the relationships between fans and players – even if it is a bit over the top. 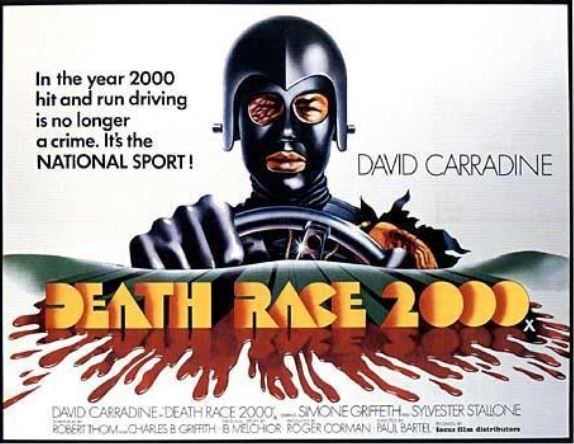 Death Race 2000 (1975) and Death Race (2008) both focus on a dystopian future where car racing is the most popular sport. However, unlike popular brands like Formula 1 and NASCAR – the goal of the race is not about who reaches the finish line first.

In the original Death Race – the goal is to accumulate points by, basically running over pedestrians. The pseudo-remake changes the setting to a prison, where inmates race and must kill each other to gain their release.

While the films are pulp popcorn flicks, the overall racing in the movie is decent enough to entertain racing fans. If you are only to watch one, the original film is held in higher regard and considered a cult classic.

Honestly, I have a hard time coming up with a sport to compare to rollerball – it is kind of a combination of roller derby, handball, and combat sports. Still, even without a direct comparison, it is no doubt a sports movie on the surface.

The movie is also a social commentary where corporations have replaced countries as the most powerful entities in the world and how they start controlling the daily lives of individuals. The sports in the movie are a big part of the story – and what makes it a thrilling ride as things slowly devolve from chaotic to murderous and mayhem. If you choose to watch the film, make sure you pick the 1975 version and not the 2002 remake, which is considered by many as one of the worst films of the 2000s.

Fishing as a sport is somewhat debatable – as some people view it more of a hobby. But we are not here to debate it, we are just including it and moving on.

“Jaws” by Viktor Hertz is licensed under CC BY-NC-SA 2.0

Jaws’ inclusion (as well as its sequels) on this list as a horror-thriller fishing movie seems pretty self-explanatory. Great white shark terrorizes the beach and town, mayhem ensues, the town tries to solve the problem – turns out they needed a bigger boat.

Jaws’ place in movie history is as important as almost any film. Many people classify Jaws as the de facto first summer blockbuster ever. It started the trend that continues today – with studios releasing many of their biggest budget blockbusters from the start of May into July.

This movie gets an honourable mention – as it is considered a comedy despite taking influence from the classic horror tale Frankenstein. Frankenhood tells the story of two morgue workers who enlist the aid of a resurrected corpse to help them win a basketball tournament and take control of the hood.

It is a crazy but fun premise playing on streetball culture and how to acclimatize an undead “monster” to the real world. You also get Charlie Murphy and J.B Smoove in supporting roles – which is a plus.