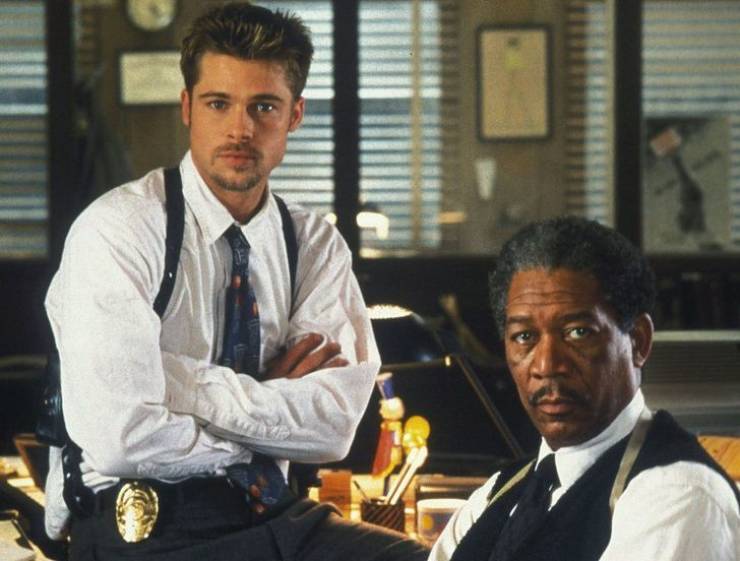 If you’ve seen Seven, you probably noticed Brad Pitt spent almost the entire film with a bandaged arm. What you might not know, it that this was not an act. In a scene where his character chases another one in the rain, Brad’s arm accidentally went through a car windshield and he severed his tendon.

The movie script actually had to be altered to align with his new injury, so that they could keep shooting and finish on schedule. 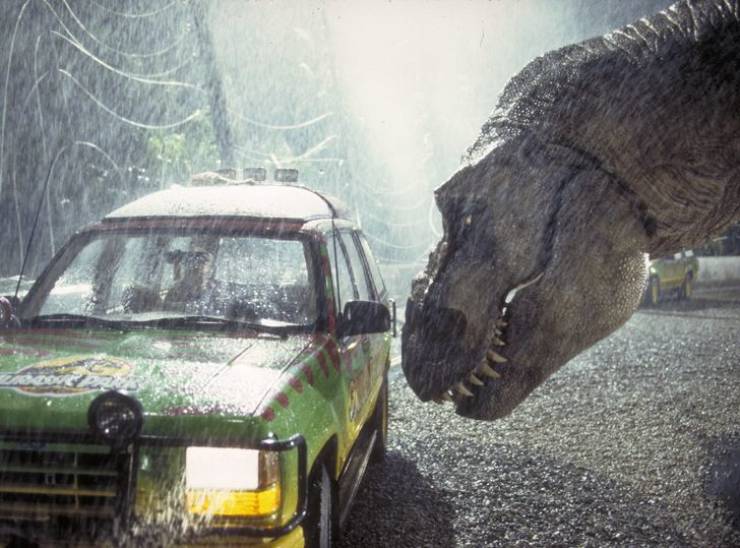 The animatronic robotic T-Rex was covered in a “skin” that soaked up water, and this would make it malfunction. As the T-Rex was in a lot of scenes with rain, this led to some memorable moments for the crew. And because at first, they didn’t know what was causing the malfunction, some people got a big scare on set.

Producer Kathleen Kennedy described it like “The T-Rex went into the heebie-jeebies sometimes. Scared the cr#p out of us. We’d be, like, eating lunch, and all of a sudden a T-Rex would come alive. At first, we didn’t know what was happening, and then we realized it was the rain. You’d hear people start screaming.”

Guardians of the Galaxy: Vol 2 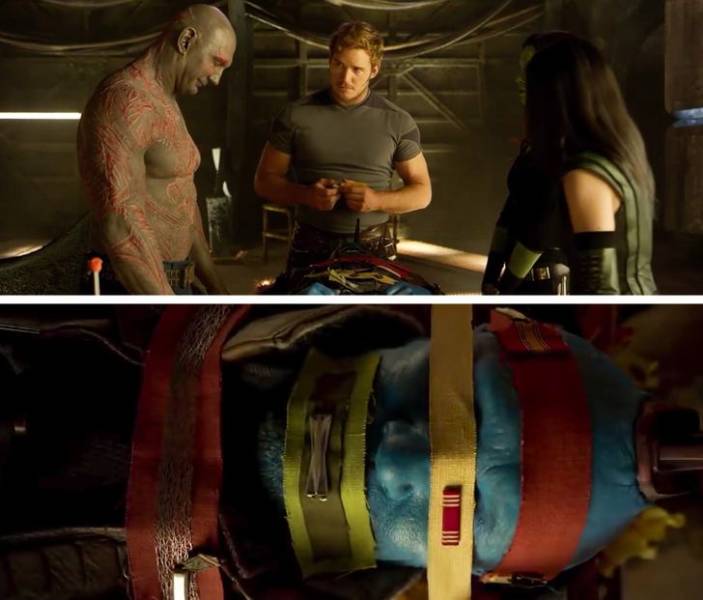 By the end of Guardians of the Galaxy: Vol 2 Michael Rooker’s character sacrifices himself to save Chris Pratt’s character. Right after that emotional scene, a touching eulogy saying goodbye to a beloved character takes place. In this scene, Michael Rooker is laid down in the dark, with his colleagues around him, and he just falls asleep, profoundly snoring through the scene.

James Gunn said in a live Q&A session: “He didn’t fall asleep once. He fell asleep 10 times.”. Michael himself tried to explain: “I fell asleep each take. I can fall asleep anywhere. It was a very relaxed environment. The lights were low. They had candles going. It was almost romantic.” 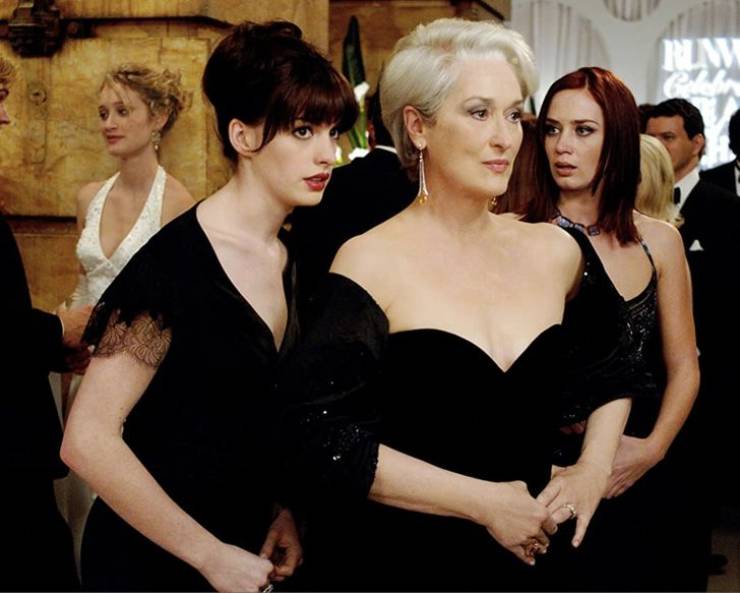 Meryl Streep’s character was a very powerful one, and she worked it to the extreme. She revealed her inspiration for the icily calm, quiet cutting-voice was Clint Eastwood and the cruel cutting remarques style from Mike Nichols’ work.

She took it to so such an extent that when she met her colleague Anne Hathaway, she told her “I think you’re perfect for the role. I’m so happy we’re going to be working together.” Then she paused and followed it up with, “That’s the last nice thing I’ll say to you.” And it really was! 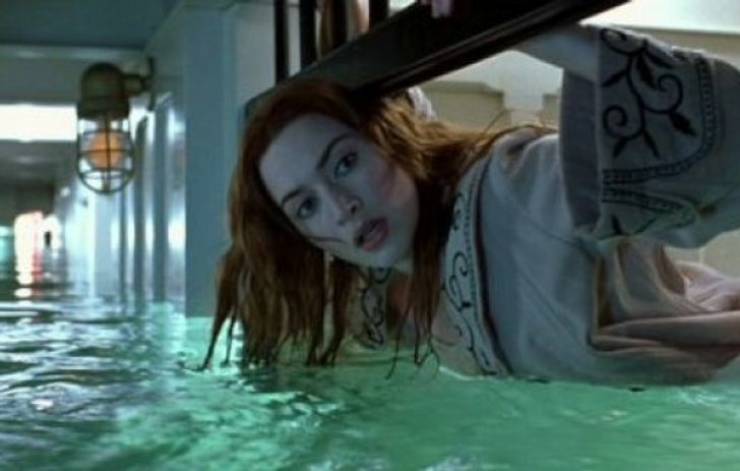 Kate Winslet had a rough time filming Titanic. She got a lot of bruises and also chipped a bone in her elbow. But getting hypothermia was the one that almost made her quit the production.

Wearing a water suit was not an option for her character. And keeping so much water heated long enough for all the scenes turned out to be impossible. She described it in her diary as swimming in “The coldest winter in the history of Scottish winters”.

The Lord of the Rings 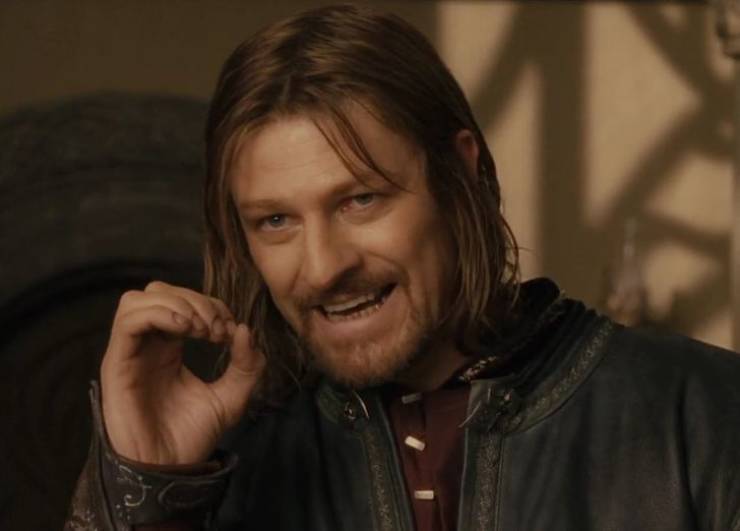 The Lord of the Rings cast often used a helicopter to reach remote locations to film during the day. But the actor Sean Bean was afraid of flying. So instead, he would either walk or even climb a mountain dressed in character, to get to the shooting site.

He said: “In The Lord of the Rings, we had to go up in helicopters and I had to walk the whole way, really [laughs]. I was two hours behind everybody else on top of this mountain because I just didn’t want to get in any helicopters.” 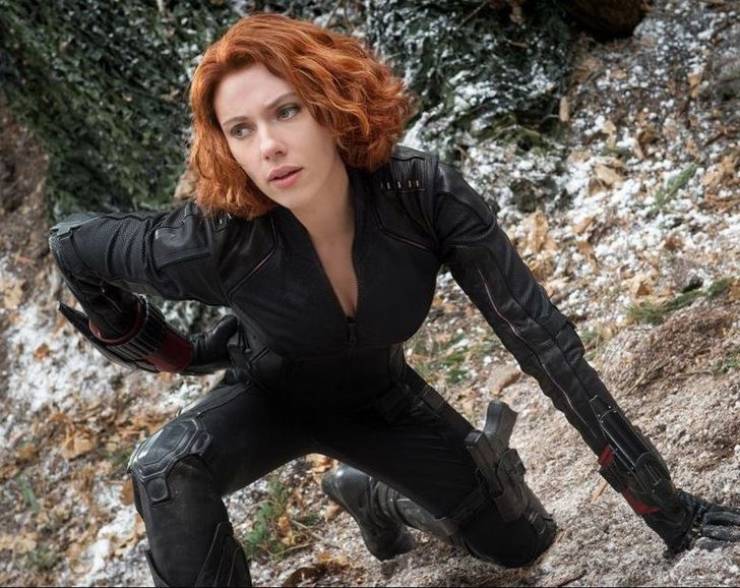 With the Black Widow movie released, actress Scarlett Johansson is considering saying goodbye to Black Widow, a character she’s been playing since its introduction in 2010. In Avengers: Age of Ultron though, she was not the only one. As she was pregnant, and starting to be noticeable, the production hired three stunt doubles for the action scenes. And that caused some confusion on set.

Apparently, the stunt doubles looked too much like the actress, confusing even her colleagues. Chris Evans referred starting a conversation with one of them as if he was talking to the lead actress, not realizing immediately he was not talking to Johansson herself. 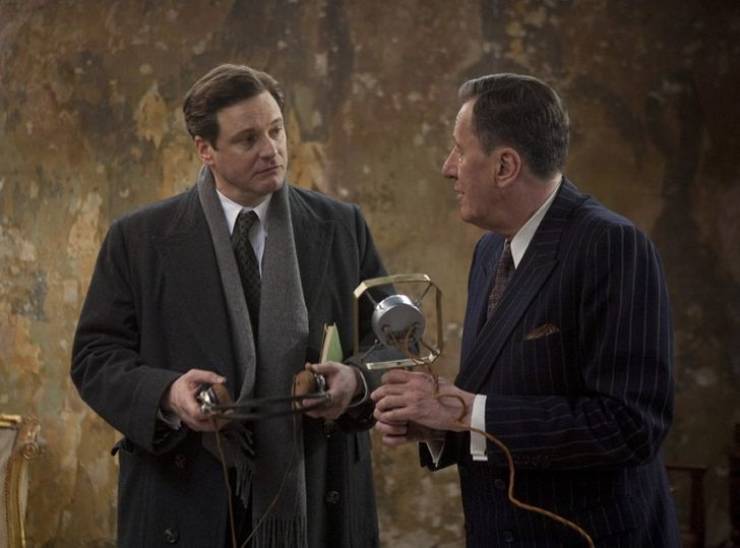 The movie’s screenwriter David Seidler, asked the widow of King George VI’s, the Queen’s Mother, permission to shoot the movie. But she asked him to wait until her death, as the memories would be too painful. By respecting her wishes, David became the oldest person, at 73, to win the Best Original Screenplay Academy Award, for this movie.

And just nine weeks before shooting, a box belonging to the real King’s therapist, Lionel Logue was found, with his notes from the therapy sessions. One of the final comments between the characters of Logue and King George VI was actually taken directly from there: “You still stammered on the ’W’.” Lionel said to the King. To which he responded: “Well, I had to throw in a few so they knew it was me.” 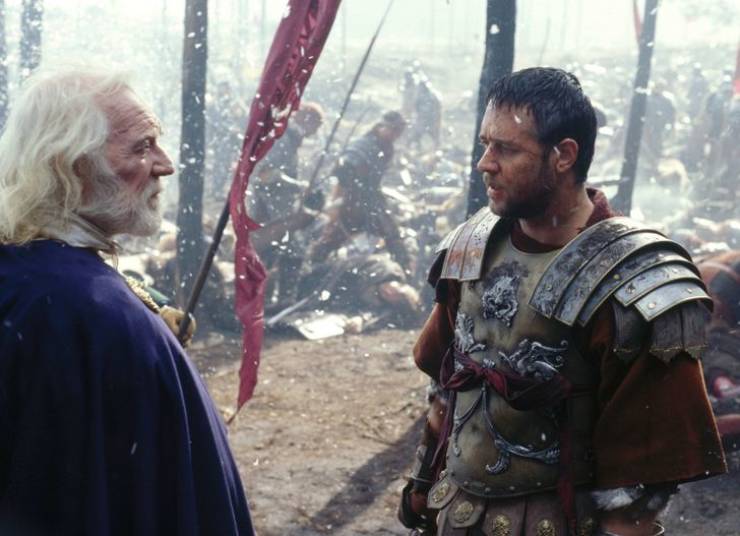 Russell Crowe had a tough time during the shooting of this movie. He sustained several injuries, like breaking a foot bone, popping some bicep tendons out of their sockets, and cracking a hip bone, to mention just a few. Also, he needed stitches in his face after the opening battle scene was shot. Something we can see clearly in the movie.

However, Gladiator won a special place in his heart, as his favorite American movie. Maybe because he put so much of himself into it. One example is his character, Maximus’, description of his home, which is an actual description of Russel’s own home in Australia. 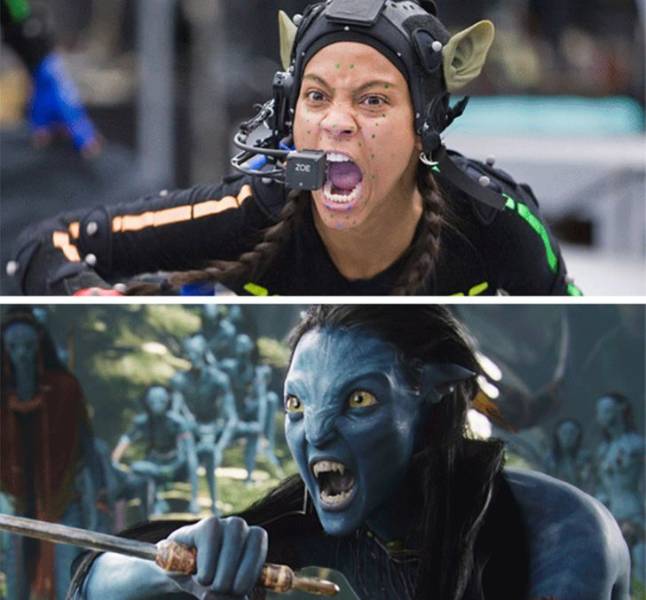 This movie, that had waited 8 years until the necessary special effects were available and another 4 more to film and edit, was a real challenge for the actors. Those playing Na’vi’s needed to wear cameras attached to their heads, as well as dots painted on their faces, so that the motion-capture software could record their facial expressions.

And as if acting with this apparatus was not enough, it is said that director James Cameron had a nail gun on set that he would use to nail cell phones to the ceiling if they rang. Confronted with it, however, he just laughed and said: “I really only threaten to nail gun the stuff”. 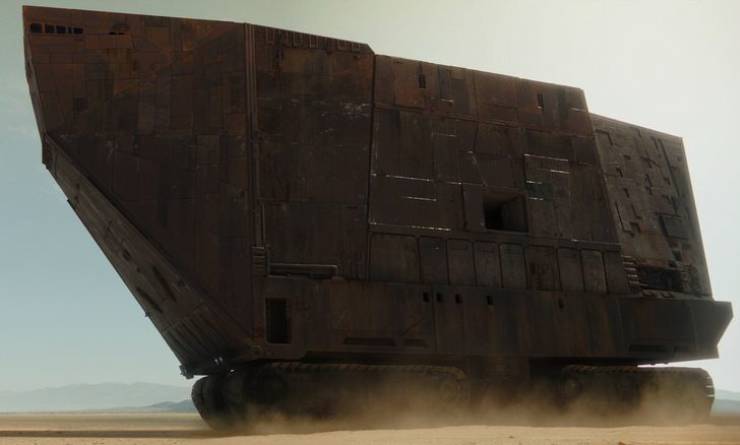 While filming on-location in Tunisia, the Libyan government became worried about a massive military vehicle parked near the border. The vehicle in question was a Sandcrawler. Sandcrawlers, or digger crawlers, are huge mobile fortresses used in the Star Wars universe. Their design was inspired by a NASA rover projected to explore alien planets.

The Tunisian government, however, extraneous (and probably not interested at all) to all these details, decided to politely ask director George Lucas to move the vehicle away from the border. 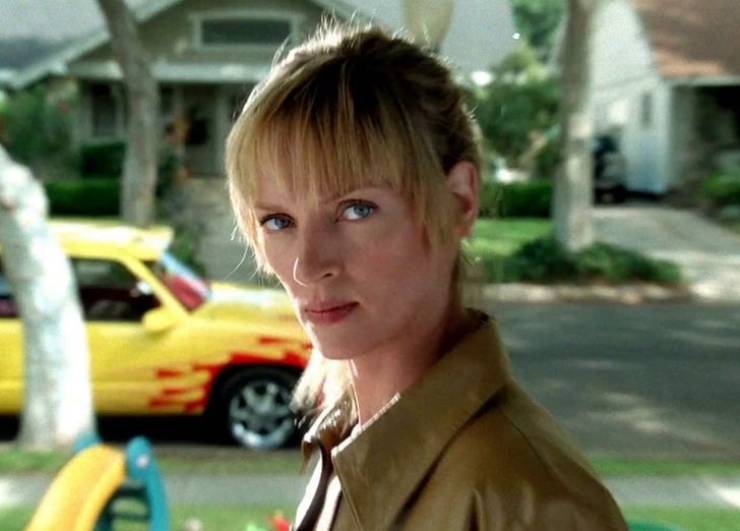 Not only actors can get hurt in the making of difficult scenes. In a scene where the actress Chiaki Kuriyama was working with her ball and chain, she accidentally hit the producer, Quentin Tarantino, on the head, as he stood next to the camera she was acting towards.

Also, the team maintained the good humor, adding a finish take by turning to the camera, waving, and saying “Hello, Sally!”, as a thoughtful gesture for their editor Sally Menke. Apparently, this and other kinds of sweet pranks for Sally, have actually been common on Quentin Tarantino productions.

The Wolf of Wall Street 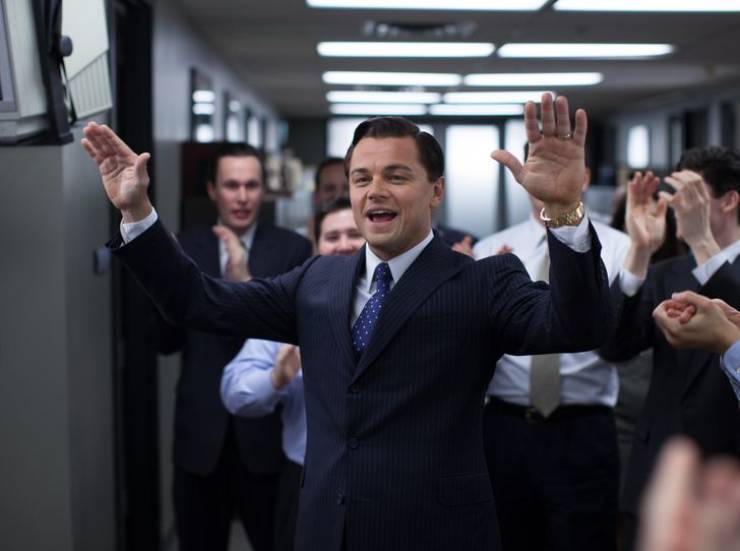 Considering that the movie was banned in 5 countries, it is sweet to know that the scene where Leonardo DiCaprio and Joanna Lumley kiss took about 27 takes because DiCaprio was just too nervous. Later on, he admitted he loved flirting with her.

Also, the car scene where Leonardo Di Caprio opens the door with his foot was improvised by the actor, as he strained his back doing it, and was only able to perform that stunt one time. This is the take that was used in the movie. 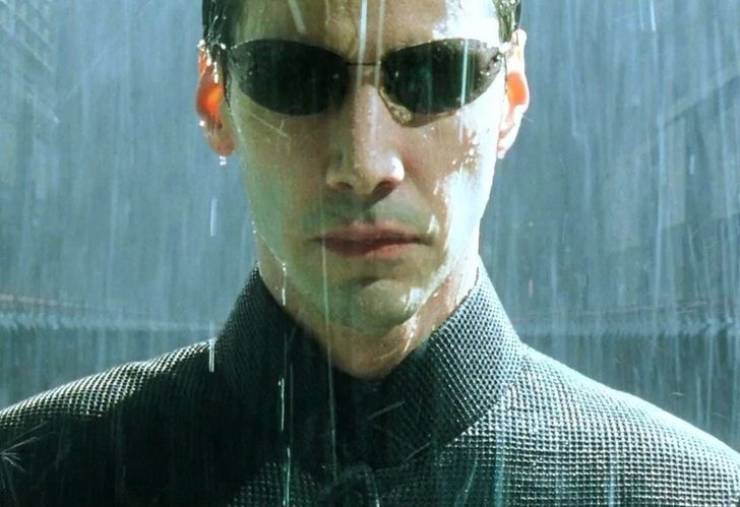 Carrie-Anne Moss wanted so much to do this movie, that she twisted her ankle shooting and didn’t tell anyone so they wouldn’t re-cast for her role. As for Keanu Reeves, he lost fifteen pounds to give his character an emaciated look.
Also, after the big shooting scene in the lobby, when the camera moves away we see a large chunk of one of the pillars falling off. This was not planned. But the scene was used in the movie, as it makes a great final for that part. 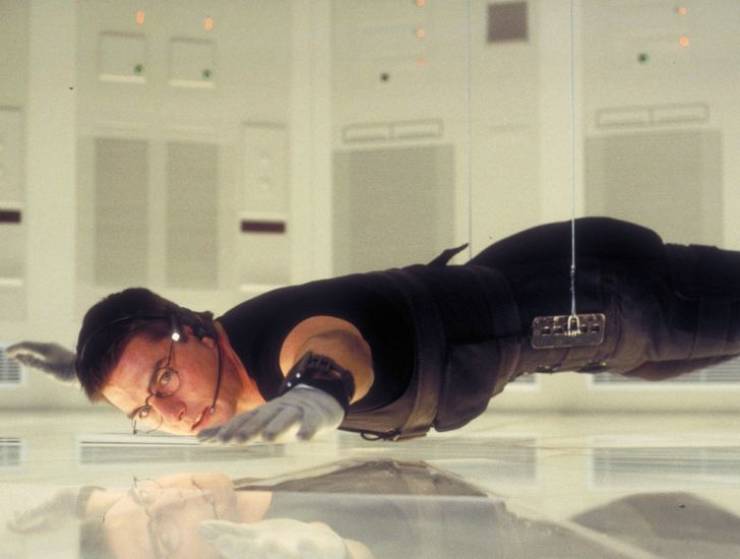 The first movie of this series, from 1996, was also the last motion picture from a big studio to be released on cassette, and its climactic train sequence took about six weeks to shoot. The scene was so impactful that in 2006 a helicopter successfully flew through a tunnel in Brazil inspired by it.

Even so, the movie kept below budget, with Tom Cruise doing all of the stunts. While filming the scene where he drops from the ceiling, for example, he kept hitting his head on the floor. So he had the idea to put coins in his shoes to counterbalance his upper body weight. It worked like a charm.

How the Grinch Stole Christmas 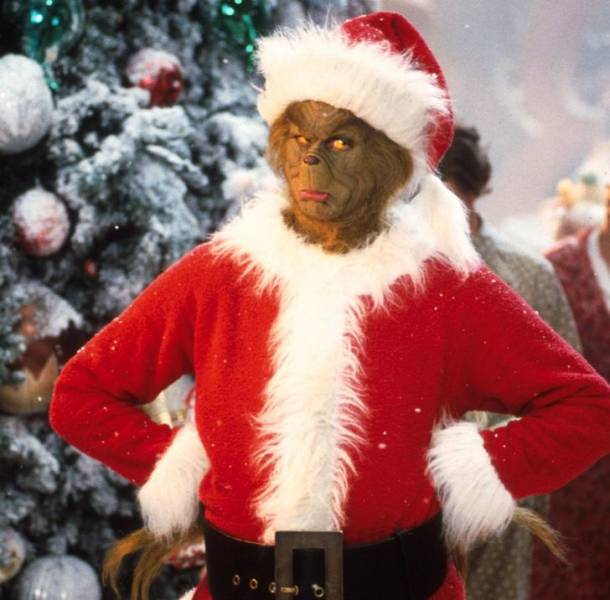 Jim Carrey spent two hours in the morning getting the grinch make-up put on, and another one at night to take it off. Jim Carrey revealed on The Graham Norton Show that he felt so confined and uncomfortable in the latex skin, he almost quit the production. Help came in the shape of counseling by a professional that had previously trained CIA agents, who taught him the same torture-resistance techniques.

And even so, he still managed to improvise when things went… too well. In the scene where the Grinch pulls the sheet off of the table, all of the silverware was supposed to fall off. But he pulled the sheet so well that nothing fell. So he had to improvise and go back just to ruin the table.