17 Women From The Famous Paintings 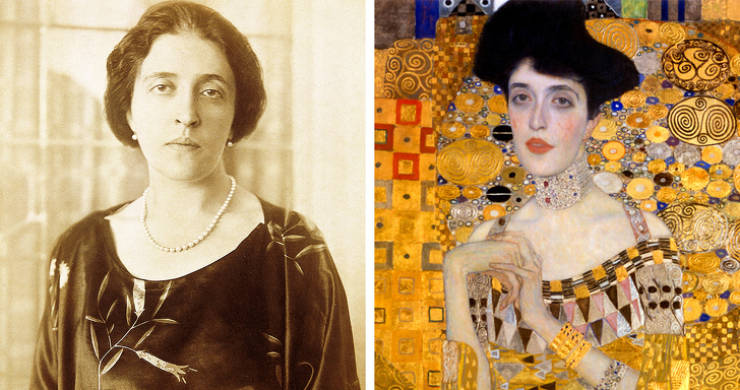 Adele Bloch-Bauer was born into a respectable bourgeois family. Her father was the CEO of the Bank Union of Vienna. At the age of 18, she got married to an art lover, Ferdinand Bloch-Bauer, who was significantly older than her. Adele posed for 4 important paintings by Gustav Klimt. The most famous one was Portrait of Adele Bloch-Bauer I (on the right). The painting is also known as The Lady in Gold or The Woman in Gold.

An interesting story is connected with the portrait: Adele’s husband was convinced that there was a romantic relationship between Adele and Klimt. In order to make the artist less interested in his wife, Bloch-Bauer ordered a portrait of his wife to be made by Klimt. He hoped that if she spent a lot of time near the artist, that he would get tired of her. The artist spent 4 years working on the painting and he made 100 drafts. Even if they had a relationship, it really cooled down during this period. Jeanne Hébuterne studied at the Académie Colarossi — a private art school. There, she met Italian artist Amedeo Modigliani who would choose his models from the students of the Academy. Soon, they began a relationship. Jeanne moved in with Modigliani and she became the main subject of his paintings. The artist painted about 25 of her portraits. The couple had a daughter who was named after her mother.

Modigliani suffered from tuberculous meningitis and he died in January of 1920 at the age of 35. Jeanne Hébuterne was pregnant with their second child at the moment and committed suicide the next day after her husband died. Amedeo’s and Jeanne’s daughter was adopted and raised by the artist’s sister. 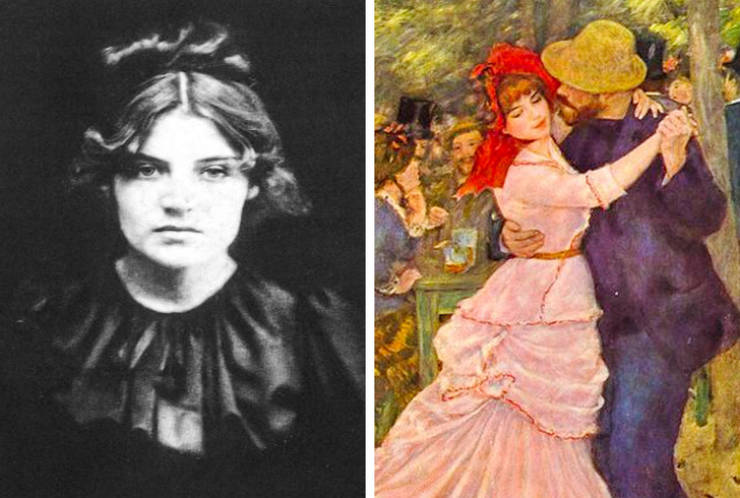 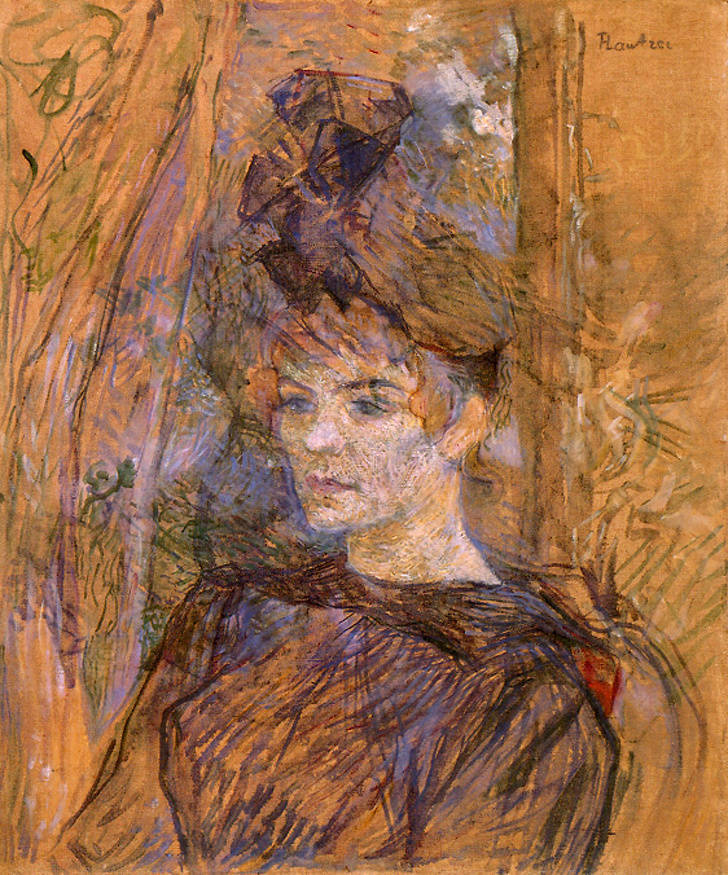 But Henri de Toulouse-Lautrec saw Suzanne in a completely different way: in the artist’s portrait above, she has a sad face, a dark absent look, and pursed lips. It was Toulouse-Lautrec who first saw Suzanne’s works and encouraged her to keep painting. He came up with her stage name Suzanne. When she was born, her name was Marie-Clémentine. By the way, her own art allowed her to achieve creative and financial success even while she was still alive. 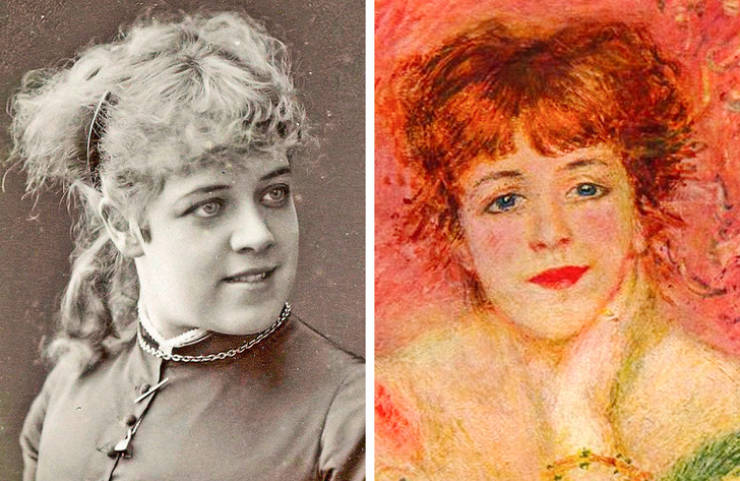 Jeanne Samary is a French actress of the Comédie-Française theater. Before she got married, she lived not far from Pierre-Auguste Renoir’s workshop and she often visited him to pose. In 1877-1878, the artist painted 4 portraits of Jeanne. Every single one of them was very different from others in terms of composition and size. One of the most famous is called Portrait of Jeanne Samary that is located in Moscow. 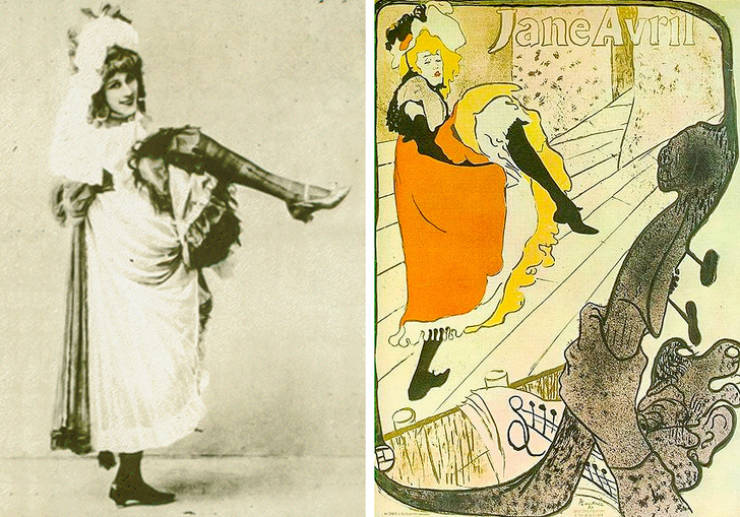 Jane Avril was a can-can dancer in the Parisian Moulin Rouge, the favorite model, and friend of the artist Toulouse-Lautrec. Jane performed at the opening of the Molin Rouge in 1889 and became very popular. It was Avril who made can-can popular at the end of the 19th century in big European cities, and she was well-known way beyond the French cabaret. She traveled with the show to England, Switzerland, and Belgium.

Toulouse-Lautrec painted Jane Avril in 15 drawings, 20 paintings, 2 posters, and in lithograph. The paintings not only showed her dancing, but also showed her in her everyday life. 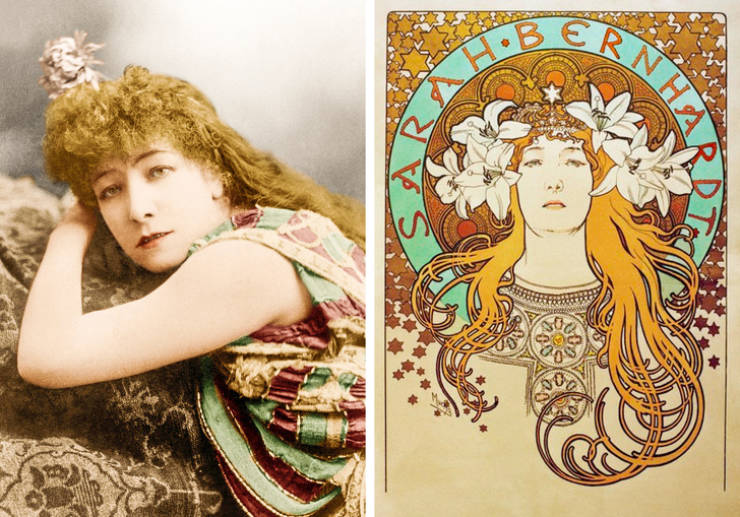 Czech artist Alphonse Mucha became famous thanks to his collaboration with Sarah Bernhardt — a famous French drama actress. It all started when Mucha drew a poster for Bernhardt and her Renaissance theater for the show Gismonda. The poster was so popular and the actress loved it so much that she signed an exclusive contract with the artist for 6 years.

During these years, he drew posters for a series of shows and for the Day of Sarah Bernhardt (on the right) — a celebration with the food, music plays, and dramatic scenes. In this poster, Mucha used the typical elements of his personal style — the mosaic background, vegetation ornaments, the beautiful hair of the main character, and a circle above her head that looks a lot like a halo. 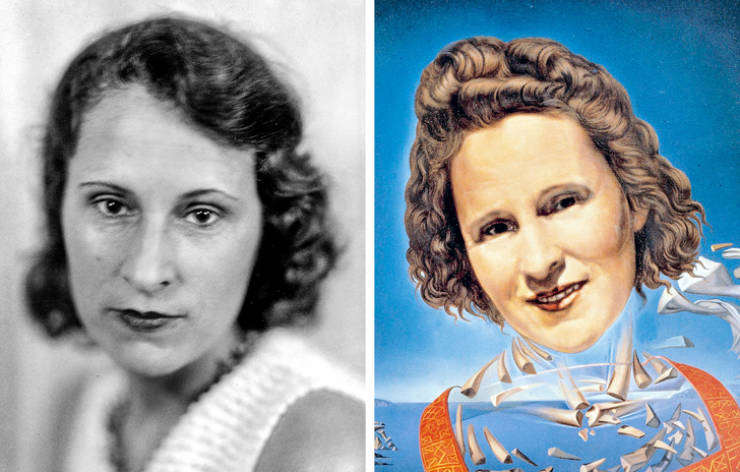 Elena Diakonova or, as she called herself Gala (French for celebration), was 10 years older than Salvador Dalí. They met in 1919 and, at the time, she was married to French poet Paul Éluard. Dalí and Gala, who left Éluard, were together for 53 years, right up until she died.

She was the artist’s wife, muse, and model. Gala took care of all the financial affairs of the artist and made his art profitable. And Dalí painted countless portraits of her. 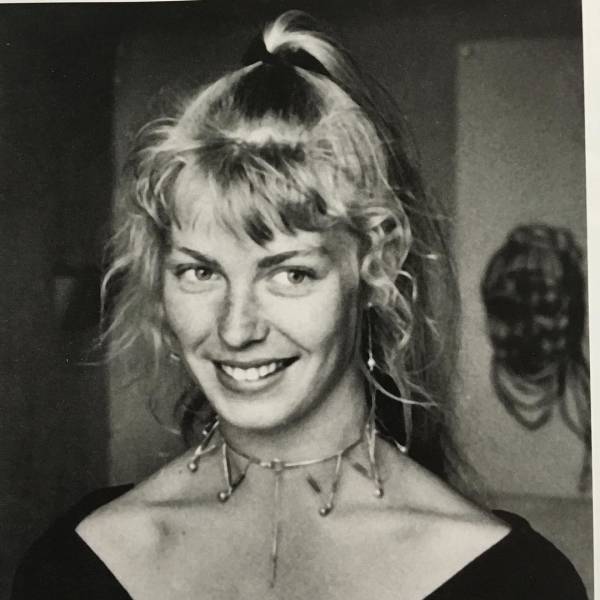 In the middle of the 1950s, Picasso lived and worked in the south of France. Once, his attention was drawn to a blonde girl on the terrace of a workshop next to his studio. He painted her before she even noticed and later he showed her the drawings. When he asked her if she would agree to pose for him, she just nodded. Her name was Sylvette David. 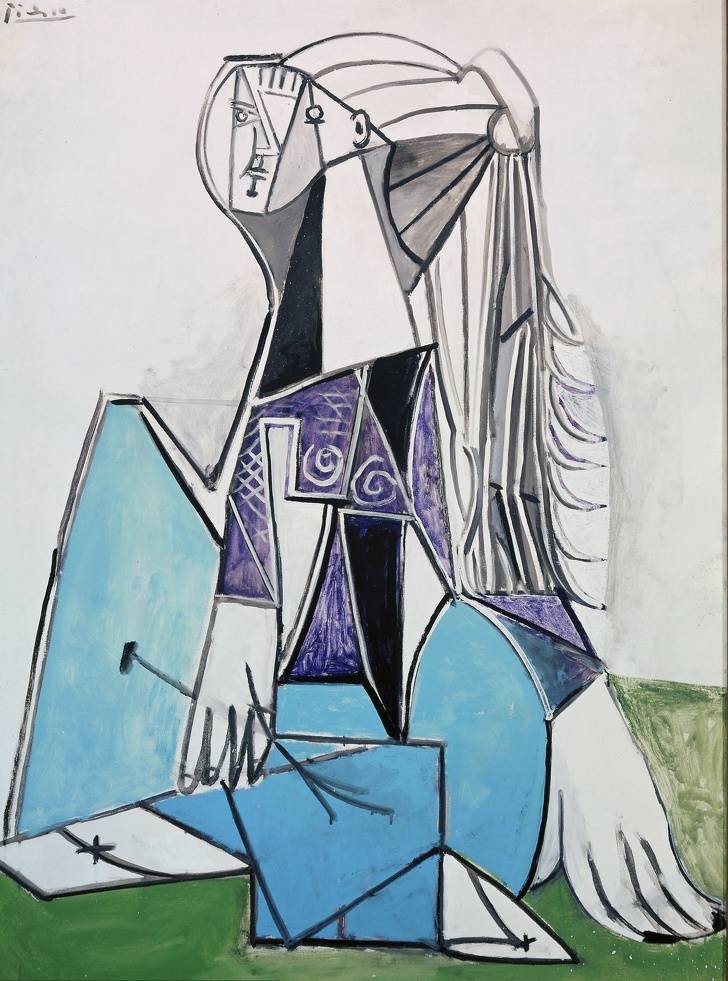 Picasso’s and Sylvette David’s collaboration resulted in a series of works — you can easily recognize them when you see a lot of blonde hair. Picasso drew more than 60 pictures of Sylvette. He presented her with one of the portraits and she was able to buy an apartment in Paris with the money she got when she sold it.

Olga Khokhlova (when married to Picasso), the wife and model of Picasso 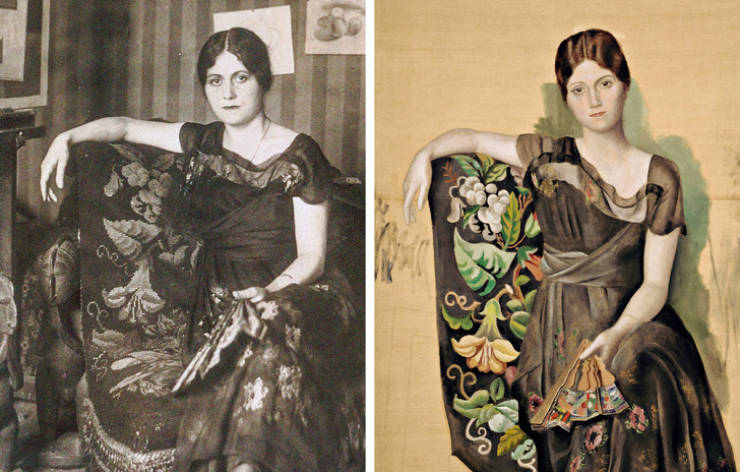 Olga Khokhlova was a Russian ballet dancer, a member of the Ballets Russes, and wife of Pablo Picasso. Khokhlova and Picasso had a son named Paulo. They broke up after 17 years of living together, but Olga remained Picasso’s wife for 37 years — up until the day she died. This was because Picasso refused to split all of his property, including the paintings he made. But it was necessary due to the prenuptial agreement they made. 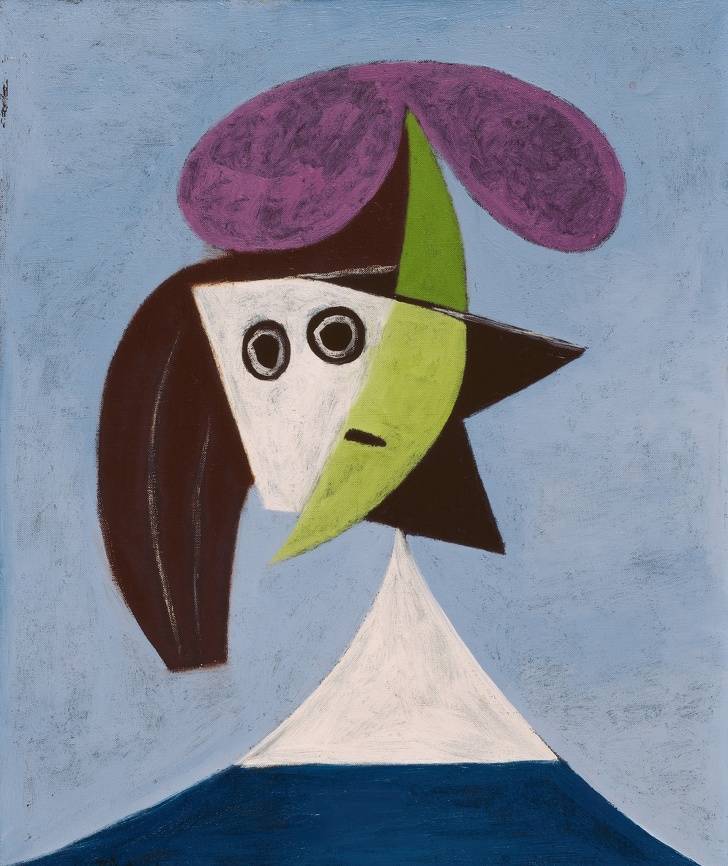 The difficult relationship between the spouses was eventually reflected in his paintings: at the beginning of their love story, Olga looked more realistic, and by the end of the relationship, Picasso drew her in a more surreal style.

Jacqueline Roque, the wife and model of Pablo Picasso 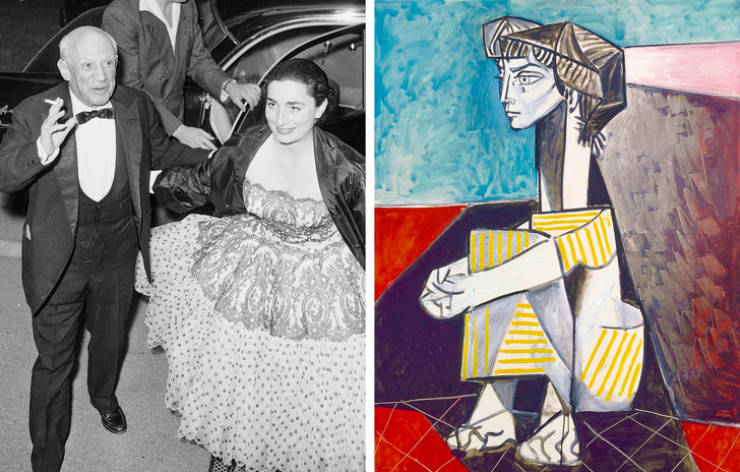 Jacqueline Roque is Pablo Picasso’s second wife and muse. When the artist first saw Roque, she was 26 and he was 72. 6 years after they met, they got married. Their marriage lasted for 11 years, until the day he died. Picasso made more than 400 portraits of Jacqueline: he drew her more often than any other model or lover. Jacqueline Roque had a hard time dealing with Picasso’s death and 13 years later, she shot herself. Painting Jacqueline With Crossed Hands is one of the most famous portraits of Roque by Pablo Picasso. 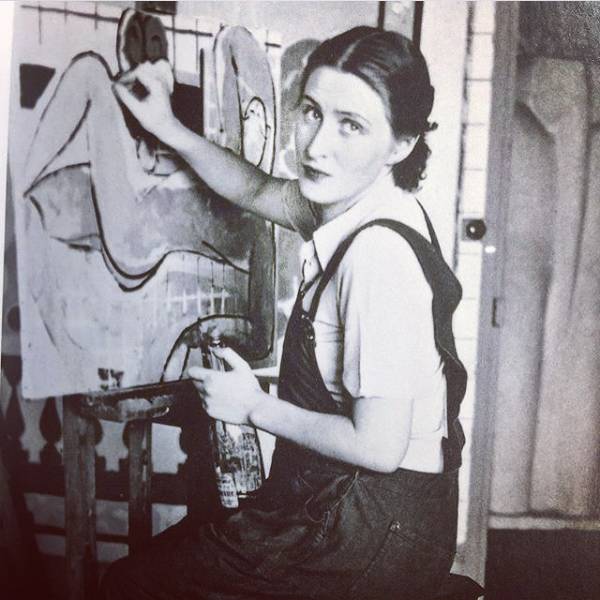 Lydia Delectorskaya was a Russian interpreter, the secretary of French artist Henri Matisse. She met Matisse after she read a notice at a bus stop in Nice. It said that an artist was looking for an assistant. 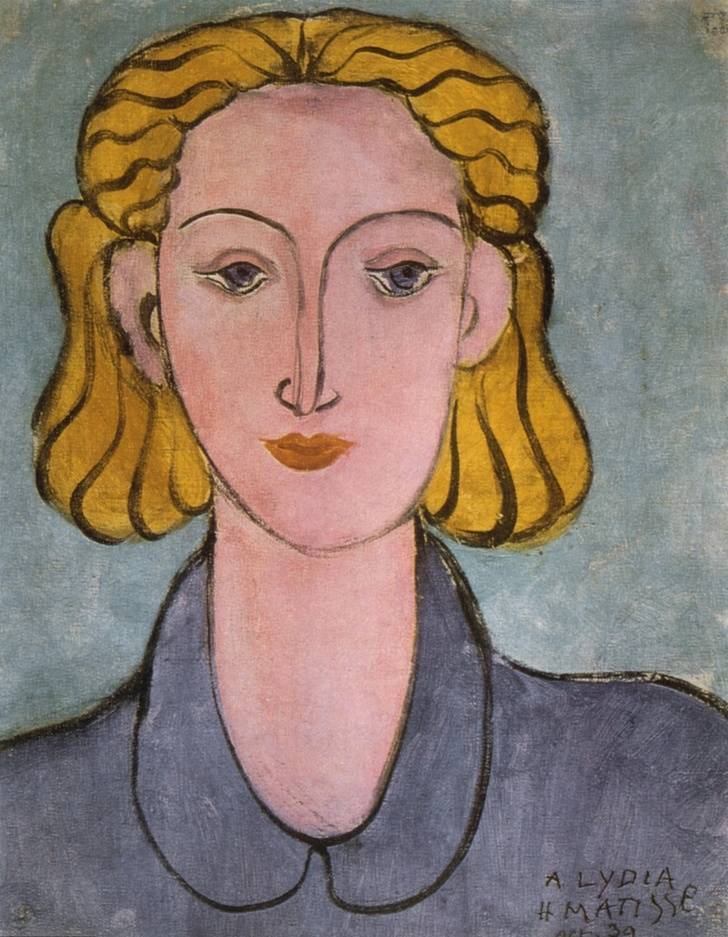 22-year-old Delectorskaya became Matisse’s mother’s nurse when she was 63. And later, the artist realized that she was the perfect model. Lydia was a nurse, Matisse’s secretary, and 3-4 hours a day she posed for him. 2 times a year, Matisse presented her with his drawings so she could have a good life. After the artist died, Lydia presented the Hermitage and the Pushkin State Museum of Fine Arts with the works she inherited from him. During the entire time Chagall worked, there was an image of a woman in his work — it was his wife Bella Chagall. “When I’m with Bella, I don’t walk, I fly,” the artist used to say. This is why he often drew lovers who were soaring above the ground. You can see the image of his wife in hundreds of his works. When Bella died in 1944, Chagall could not return to his work for a year. He continued to draw her even after she died. 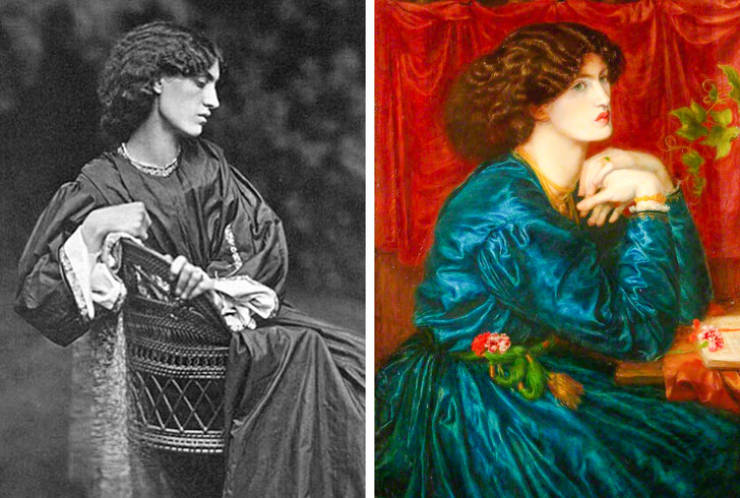 In 1857, Jane and her sister went to the theater together where they were noticed by artists Dante Gabriel Rossetti and Edward Coley Burne-Jones. They were both impressed by Jane’s beauty and they convinced her to pose. Later, she worked for William Morris who proposed to her and they got married.

Before the marriage, Jane was not very well-educated but after she got married, she started taking private lessons, she learned Italian and French and became a piano player. There is an opinion that Jane was Eliza Doolittle’s prototype from Bernard Shaw’s play Pygmalion. On the right, Jane Morris is in Rossetti’s The Blue Silk Dress that was painted in 1898.

Previous 18 Tattoos That Are Even Better With Backstories
Next 40 Terrifying “Thanks, I Hate It” Memes