30 Fast-Food Items People Have Obsessed About Over The Years 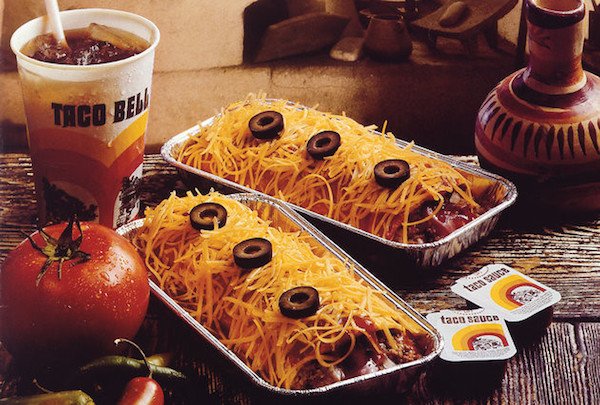 A burrito topped with cheese, red sauce, and three olives, this concoction was a real hit right up until the moment it was discontinued. However, rumor has it that it’s now a secret menu item that some Taco Bells will make for you 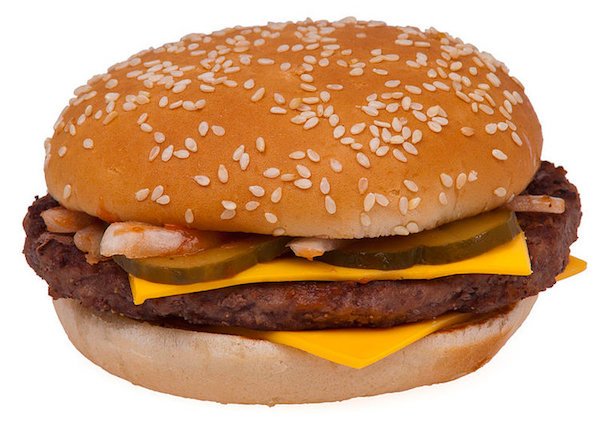 Invented by franchise owner Al Bernardin, the Quarter Pounder with cheese was sold as a meatier alternative to the chain’s classic hamburger. 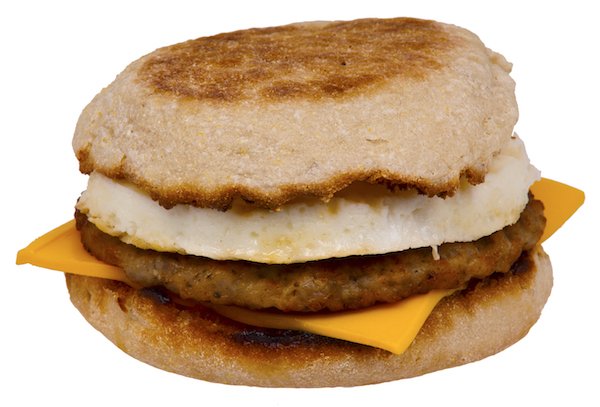 Veteran McDonald’s exec Herb Peterson changed the fast food world after introducing a speedy breakfast sandwich that tasted like eggs Benedict. The Egg McMuffin has had a long life span and doesn’t look to be leaving the McD’s menu anytime soon.

Essentially a ham and cheese sub sandwich, the Yumbo was a stark departure from the normal Burger King menu, but it gained a small but loyal following for a while. It was also briefly brought back in 2014 for a moment. 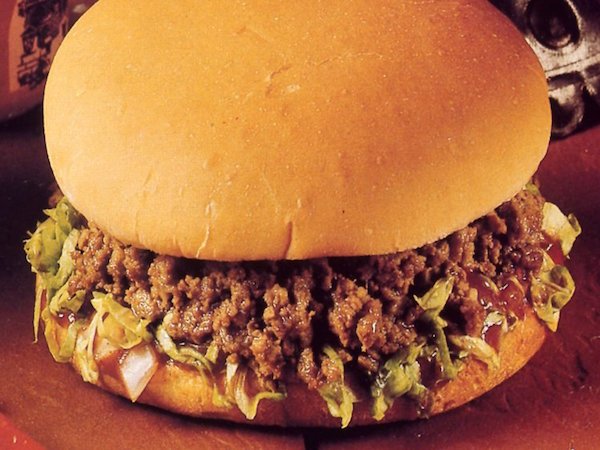 A simple concept, what if you took a taco and put the ingredients on a hamburger bun? Sounds terrible, and it certainly did not stand the test of time. 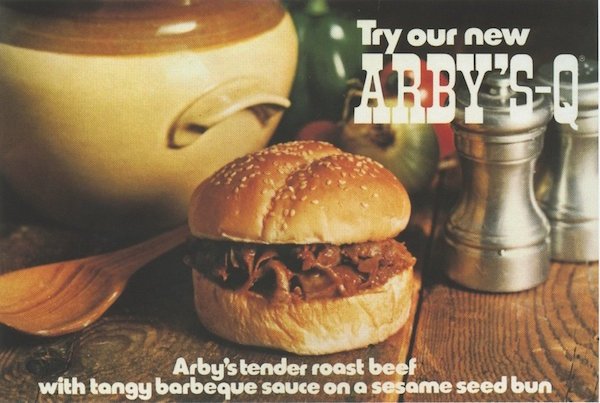 The Arby-Q sandwich has been introduced, discontinued, and reintroduced many times over the years. It’s a simple concept: roast beef, barbecue sauce, & a bun. 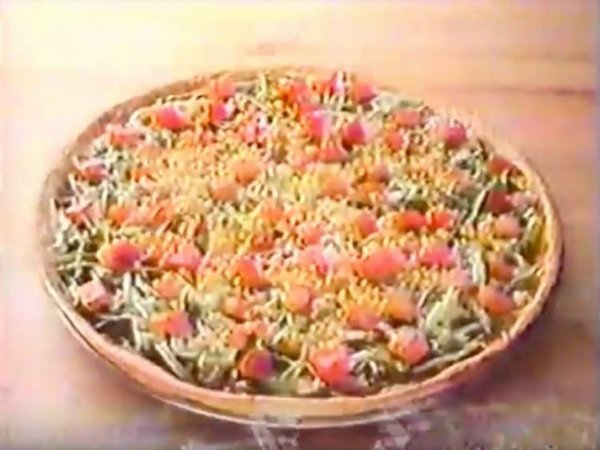 Basically a Taco Bell taco in pizza form that Pizza Hut offered long, long ago. Sometimes restaurants get a little too ambitious and decide not to stay in their lane. 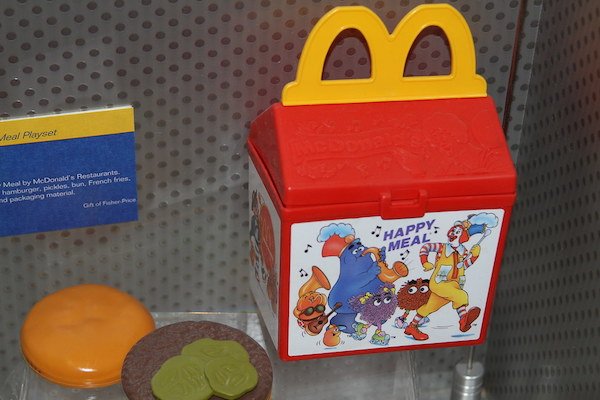 The only non-food related item on this list, but arguably the most brilliant creation, McDonald’s had the genius idea of combining fast food and toys together to win over the kids affection at a young age. The concept worked like a charm and many chains followed suit shortly after. 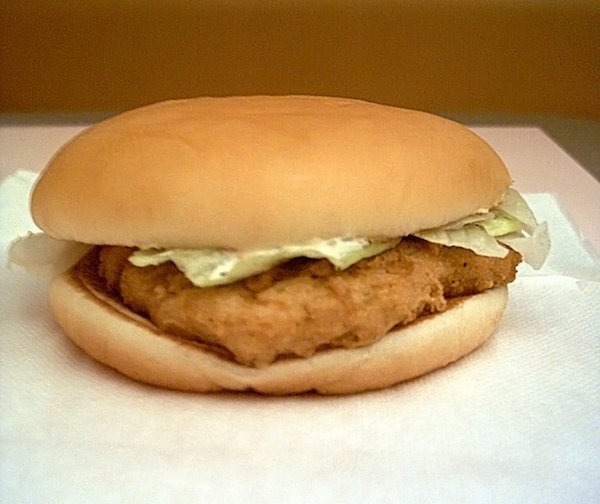 McDonald’s has had a love-hate relationship with this item over the years. Its first 17 years held disappointing sales than its much more popular younger sibling, the McNuggets. However, it has since built itself a permanent home on the McDonald’s menu. 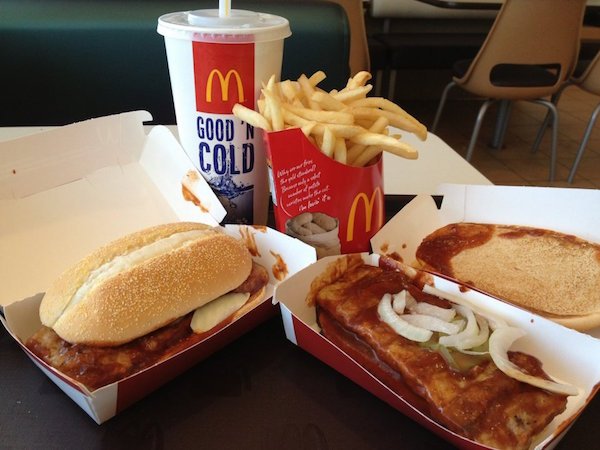 Let me start by saying personally I’ve never really loved the McRib sandwich. However, I am often alone on this as many swear by the popular item as one of the company’s very best items and over time it has taken on a near-mythical standing. It goes away and comes back like seasons out of the calendar year. 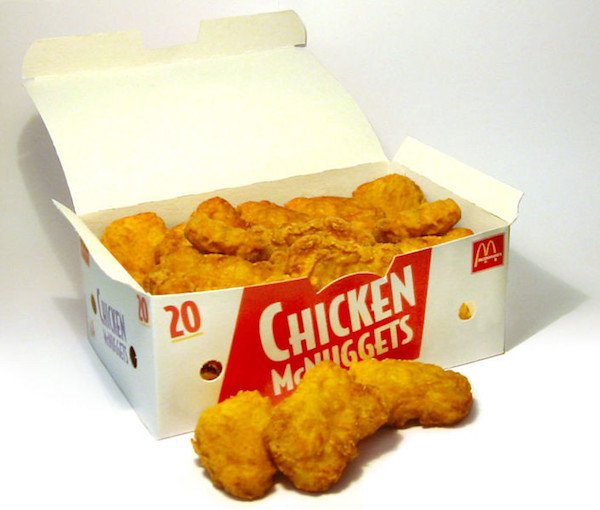 The McNuggets (a.k.a. God’s gift to mankind) were invented by the chain’s first executive chef, Rene Arend, and were a massive hit. They still remain one of the company’s most popular items. 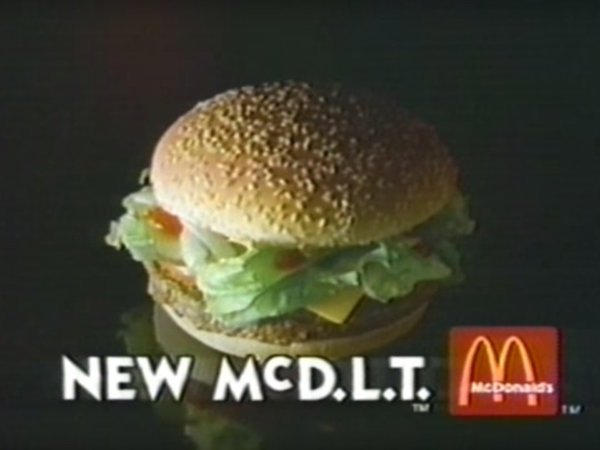 The McD.L.T., which stands for “McDonald’s Lettuce Tomato,” was a burger with lettuce, tomato, mayo, and cheese — nothing more.

I never tried this one myself but it’s release shares the year of my birth, so you know it had to terrible. I kid. Sort of. 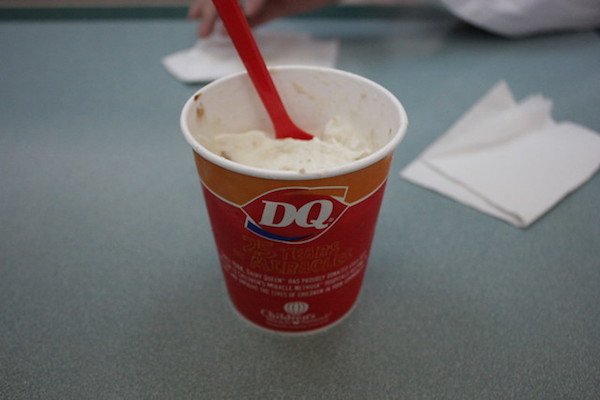 Dairy Queen rolled out soft-serve ice cream in 1938, but it wasn’t until almost 50 years later that DQ blended the toppings into its soft-serve creating one of its most popular items till the present day. 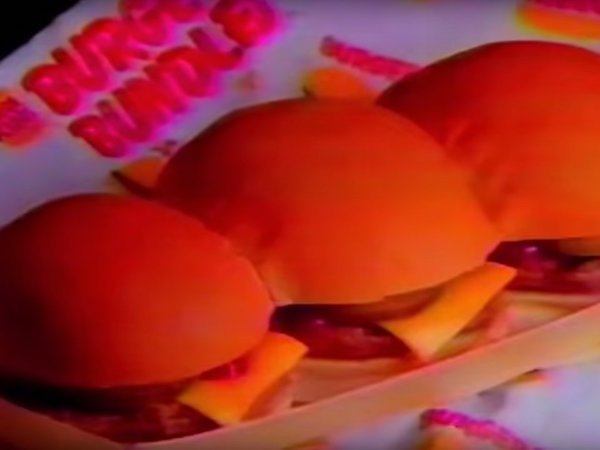 These existed for a quick stint in 1987 and were essentially the opposite of a Whopper. They were simply tiny burgers one could eat in a single bite and at some point people had to ask themselves, “But why?” 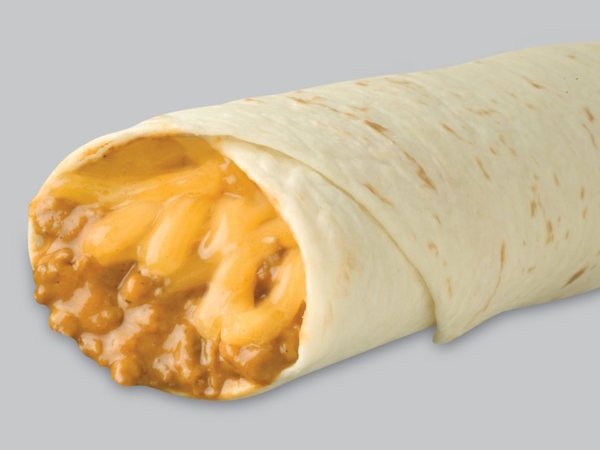 This cheesy staple item still exists today. It was briefly removed in the ’90s, however, after much complaining from the customers the demand got the item returned to its rightful place on the menu. 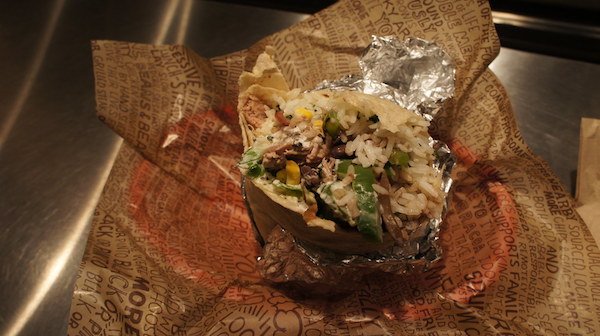 The Chipotle burrito changed the fast food game. It’s essentially an adaptation of the Mission burrito, which has been a staple of San Francisco’s Mission district since the mid-1900s. In 1993, world-renowned chef Steve Ells brought an Americanized version to diners. 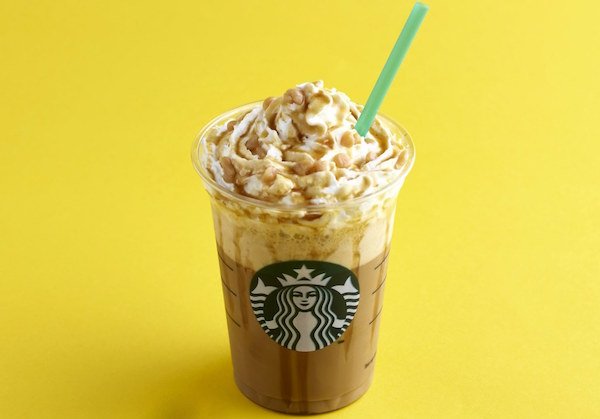 A play on the words “frappe” and “cappuccino,” the Frappuccino is Starbucks’ most famous staple drink (aside from plain coffee itself, of course). The popular drink has had many iterations over the years like the Unicorn Frappuccino, Zombie Frappuccino, and most recently, the Tie-Dye Frappuccino. But the traditional Frappuccino still rules supreme.

Burger King and Pillsbury joined forces to create tiny cinnamon rolls that lived on Burger King’s breakfast menu until the early 2000s. However, thanks to fans demand, the item has remade its way onto Burger King’s menu to this day. 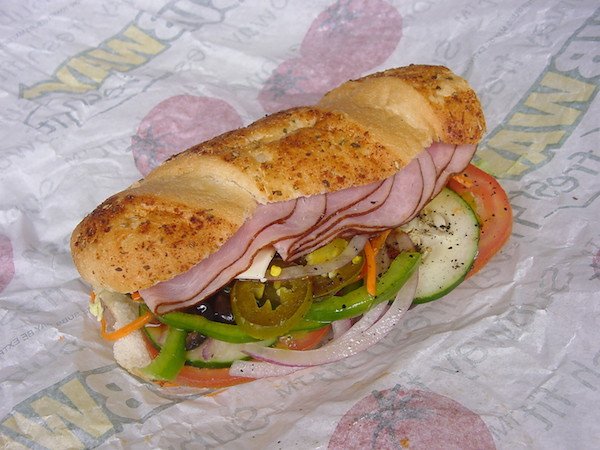 The “Subway Diet” was no small fad, and at the turn of the millennium, thanks in part to the popularity of to ex-spokesman Jared Fogle (no need to go digging up that tragic fiasco), the Subway’s sandwiches were often advertised as a healthier alternative to burgers. How true of a statement that really is is up for debate, but it certainly was a mindset the permeated with the nation. 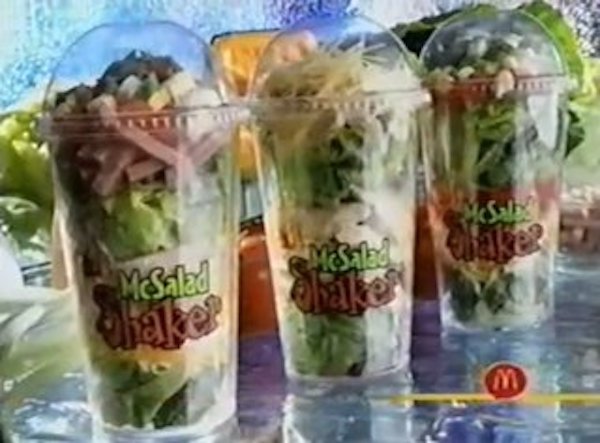 2000 was a wild time. Thankfully, the Y2K end of days never happened, going through TSA was a breeze, and teenage guys were putting glue in their hair…to look cool. The McSalad Shaker, which was simply a salad in a plastic cup that you could shake before eating. What a novel concept. 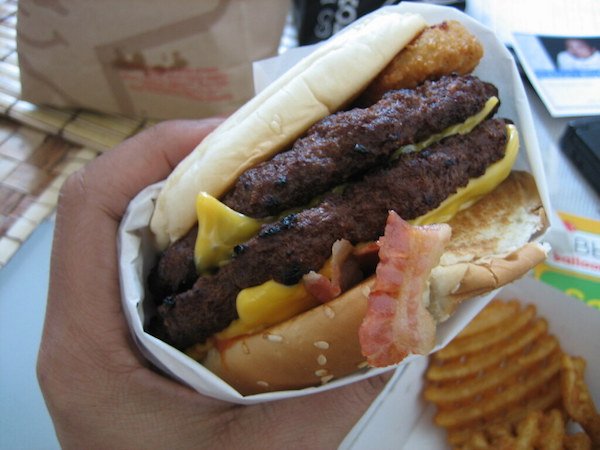 The massive third-pound burgers, released by Carl’s Jr. in 2001, actually cost $3.95. Wisely, the company advertised the burgers as a “Six Dollar Burger” claiming that equivalent burgers would cost $6 at a casual restaurant. 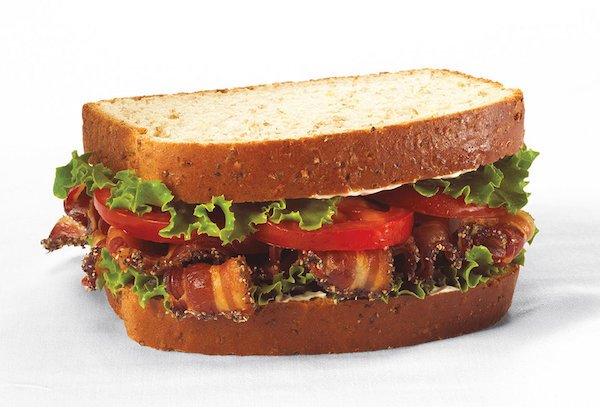 First introduced in the summer of 2002, the Ultimate BLT returns often when the weather is hot and customers crave something a bit lighter on the menu. 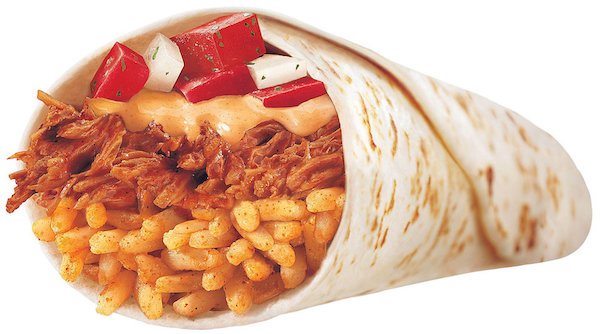 The item has been off the menu for some time now, however, the burrito with spicy shredded chicken, rice, and salsa, has many loyal fans urging Taco Bell to bring it back. 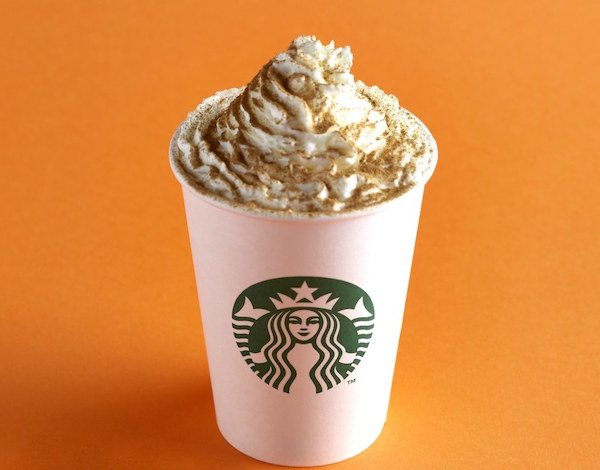 Nothing brings up pleasing vibes of the Fall season quite like pumpkin spice wafting from your local Starbucks. Invented by a Stanford basketball player, this popular latte returns to Starbucks every year at the beginning of fall. And so the PSL craze was born that year and has remained strong ever since. 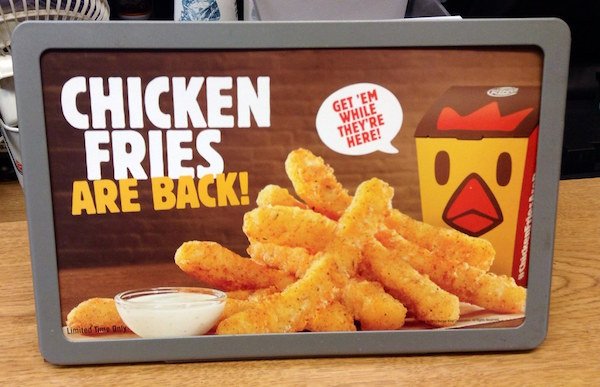 Chicken into the shape of fries? Madness, I tall ya! The item was designed to fit into a cupholder for the “adult snacker”, and the item has been going strong ever since its birth. 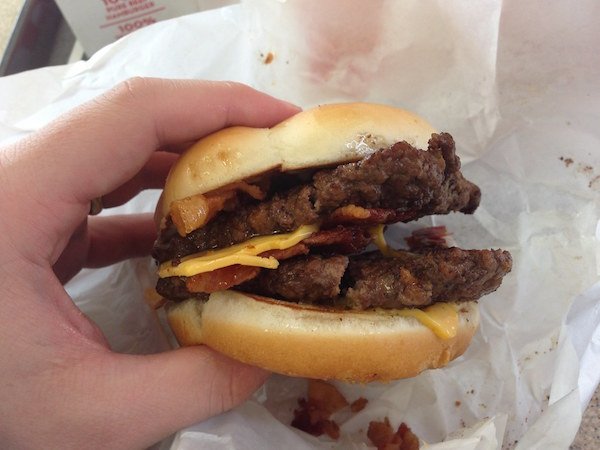 Wendy’s had me at “Baconator”. The bold burger was originally introduced in 2007 as part of a plan to turn Wendy’s sales around. And wouldn’t you know it, it did exactly that, and now it’s arguably the chain’s most popular sandwich. You know…because BACON. 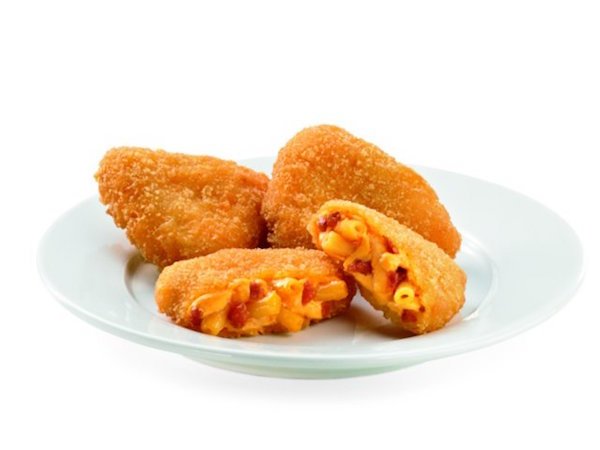 Other fast food chains have taken a stab at the indulgent dish, but Jack in the Box did it first. Crispy on the outside, gooey and cheesy on the inside, it’s no wonder why these mac bites have had many runs on the menu over the years. 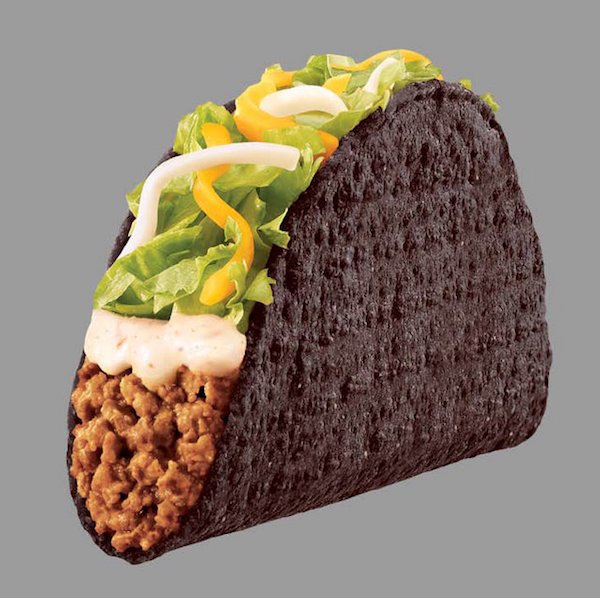 The big selling point of this Halloween dollar menu special was its black shell. So gothic, right? Inside was a fairly standard filling of ground beef, lettuce, three-cheese blend, and a special Pepper Jack sauce to give it some kick. 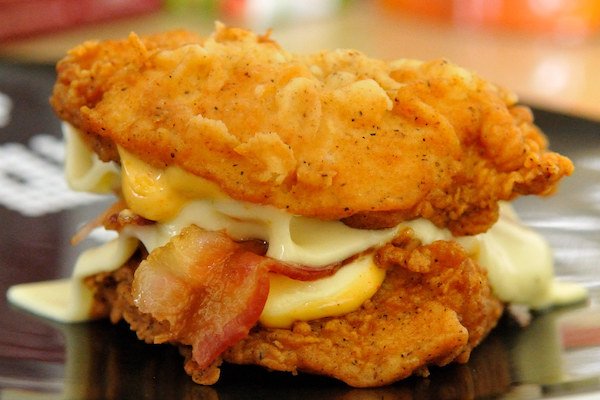 Some insane (perhaps genius) ‘Merican soul decided fried chicken as the buns in a fried-chicken sandwich, slapped with some bacon and cheese in between, was just the kind of thing the world needed. The sandwich sent shockwaves through America when it was introduced in 2010. Sadly, it no longer exists in America but continues to appear in KFCs around the world.