A Secret Diary From 1957 Found In A Thrift Shop

Thrift stores can surprise you with the things you can find there on sale, like this diary from 1957 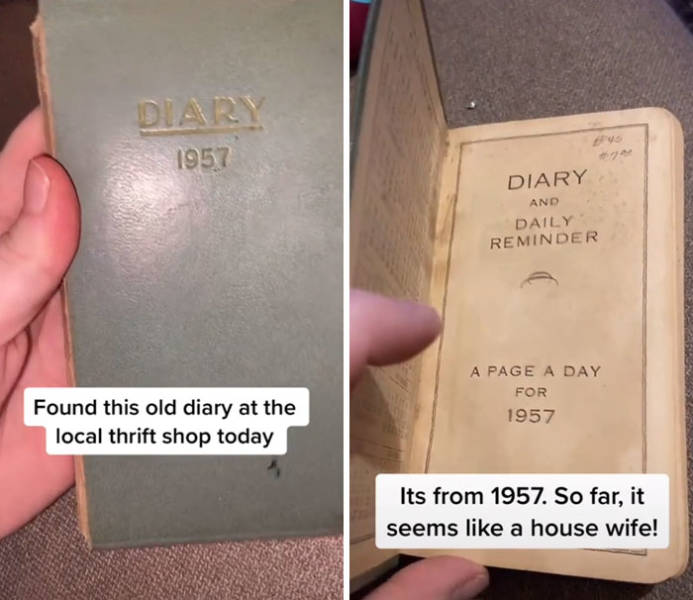 So, TikToker @otherworlddesign recently stumbled upon a vintage diary in a thrift store. In particular, it was a used diary—one that already had been filled up with writings from cover to cover—from 1957.

After reading it, the TikToker deduced that it belonged to a housewife named Nellie from Oklahoma. While personal things like these do often end up in thrift stores due to things like spring cleaning or moving, it’s not known how this particular diary ended up as a deal on the shelves.

The diary quickly spawned an entire TikTok channel dedicated to exploring entries from the diary. Every few days or so, it posts a single entry from a particular day. Since the diary is pocket-sized, the entries were short, ranging from several words to a handful of sentences.

But, it’s no ordinary diary—someone wrote in it for a full year, and this TikToker shared some entries

For the most part, it detailed the things Nellie did or happened to her throughout the days. While some entries are a complete mood affair, like “didn’t do anything but eat all day,” others were more detailed and eventful, like her going to a wedding: “Today is a colored wedding and it’s just as beautiful as the others.” 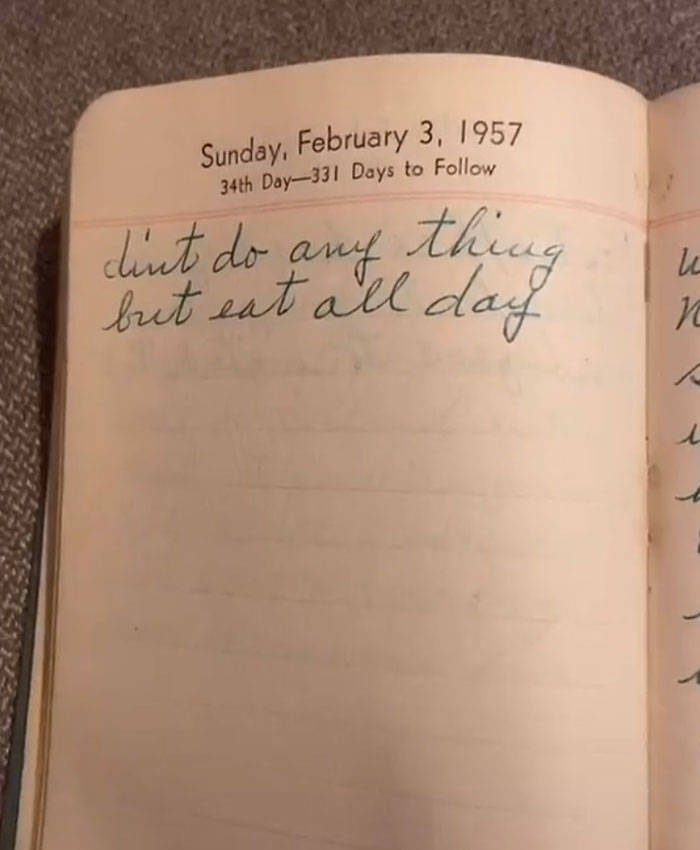 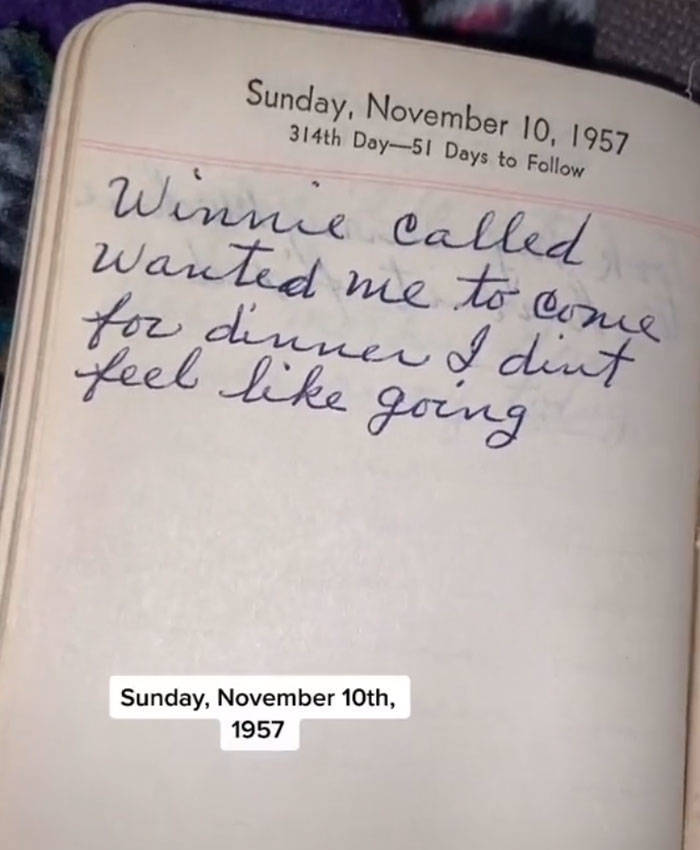 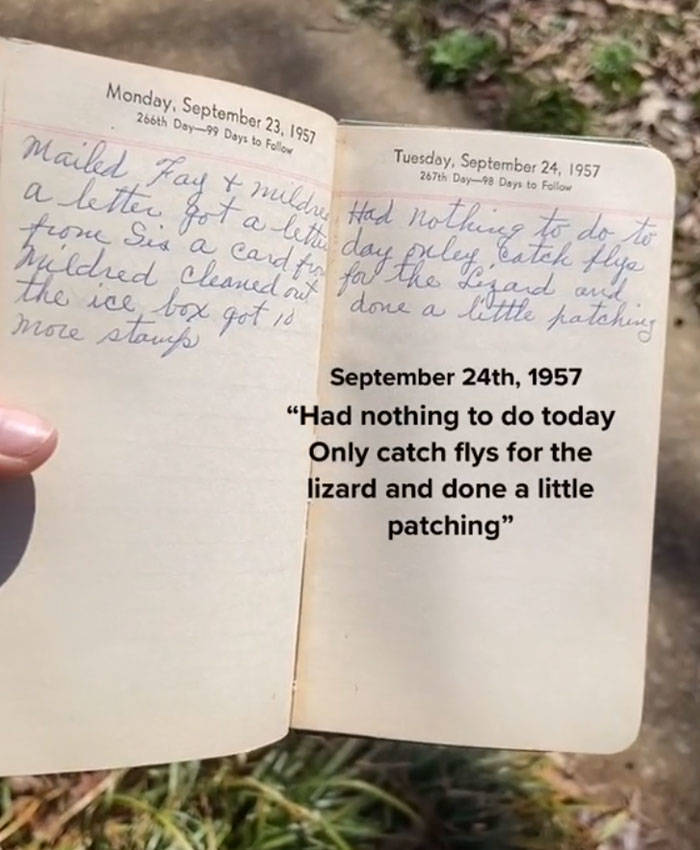 The diary serves as an insight into what life was like back in 1957. It often refers to very 1950s names like Winnie, Jinks, and Garland. One entry details Nellie’s trip to Albuquerque, New Mexico, saying how a coffee and a pie cost 31 cents, and how supper cost 55 cents, which is $2.90 and $5.15 today respectively. 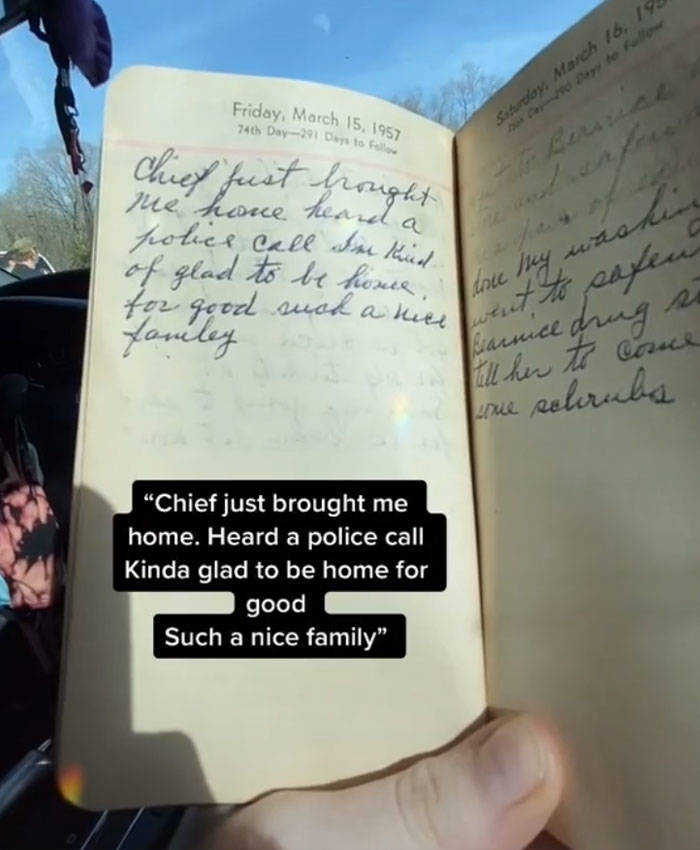 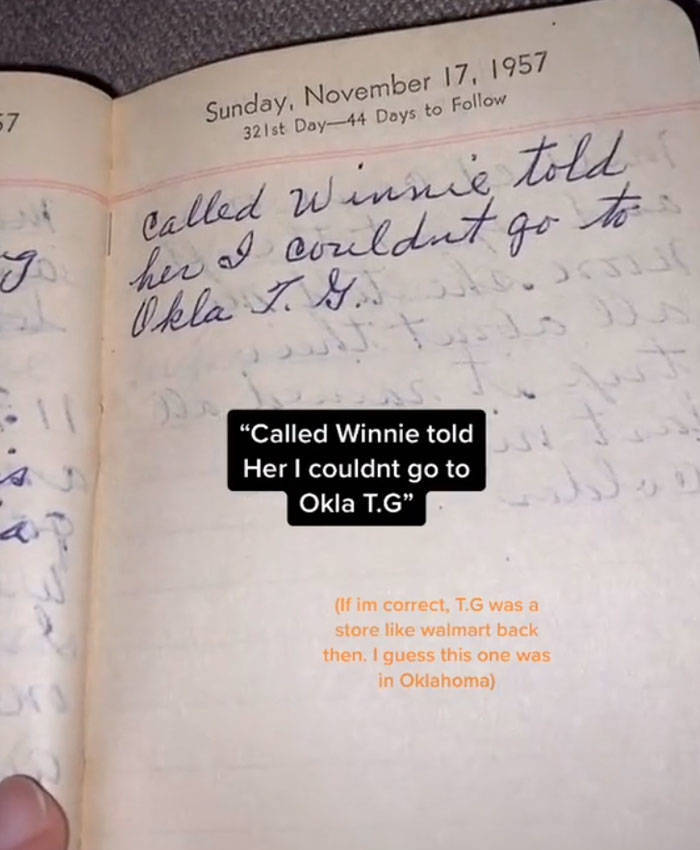 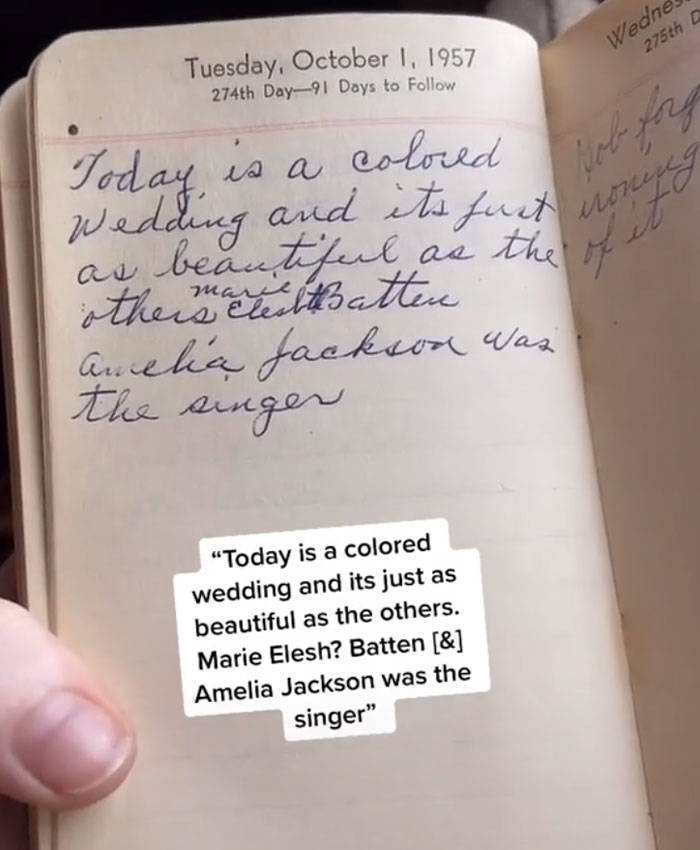 It also refers to retailers of the time—like Safeway and T.G. FYI, Safeway is still around today, it’s a supermarket company, while T.G., or TG&Y in full, was a variety store that went defunct in 2001. Incidentally, it was headquartered in Oklahoma, where our heroine lived.

Heck, there was even one instance where Nellie told a whole story of how she snuck up to her friend Vicky poking at a fox hole and scared her half to death. Sounds like good times! 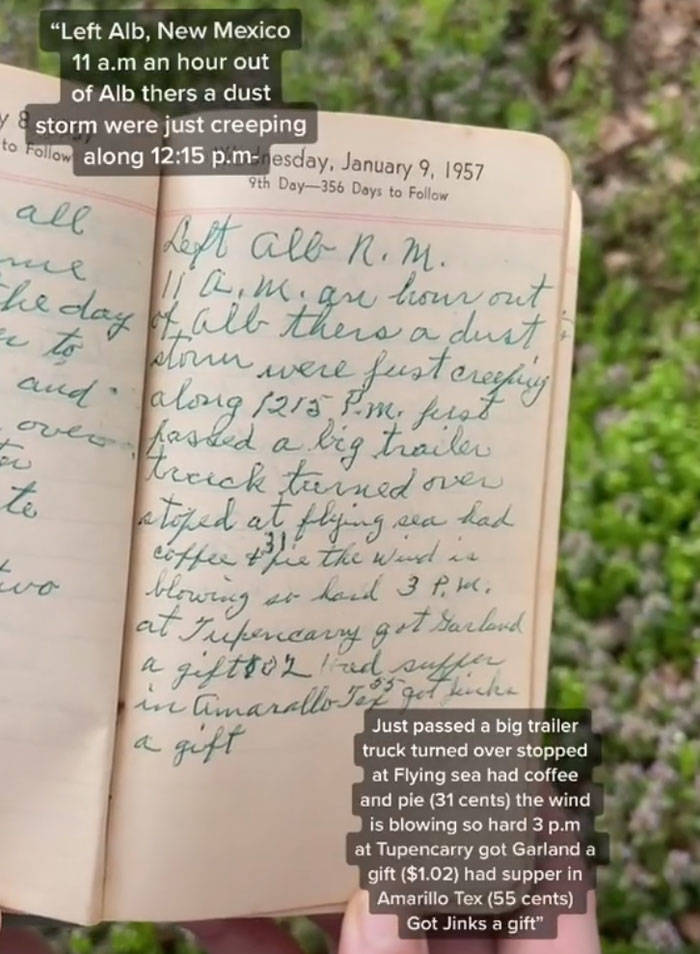 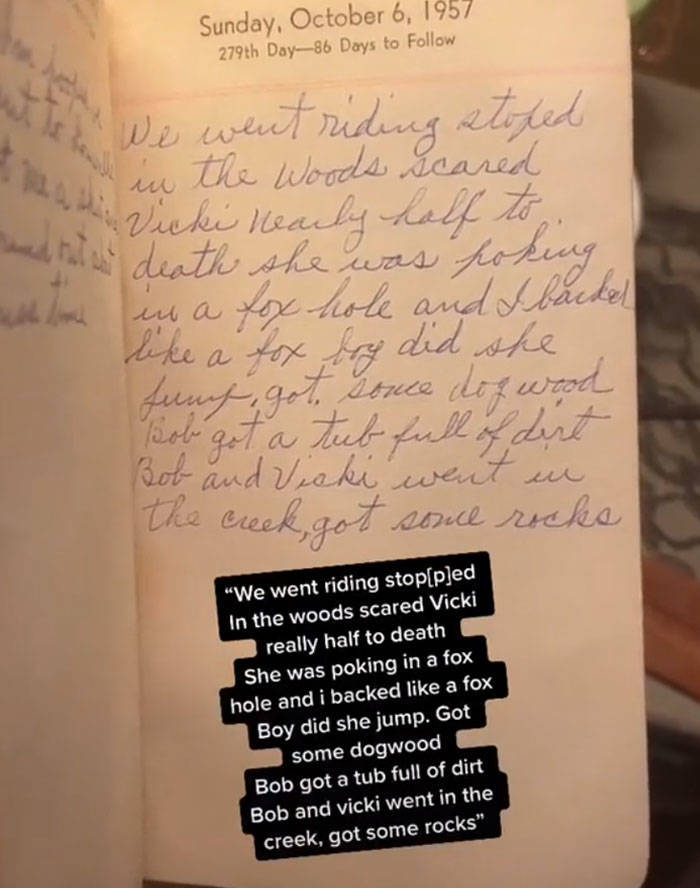 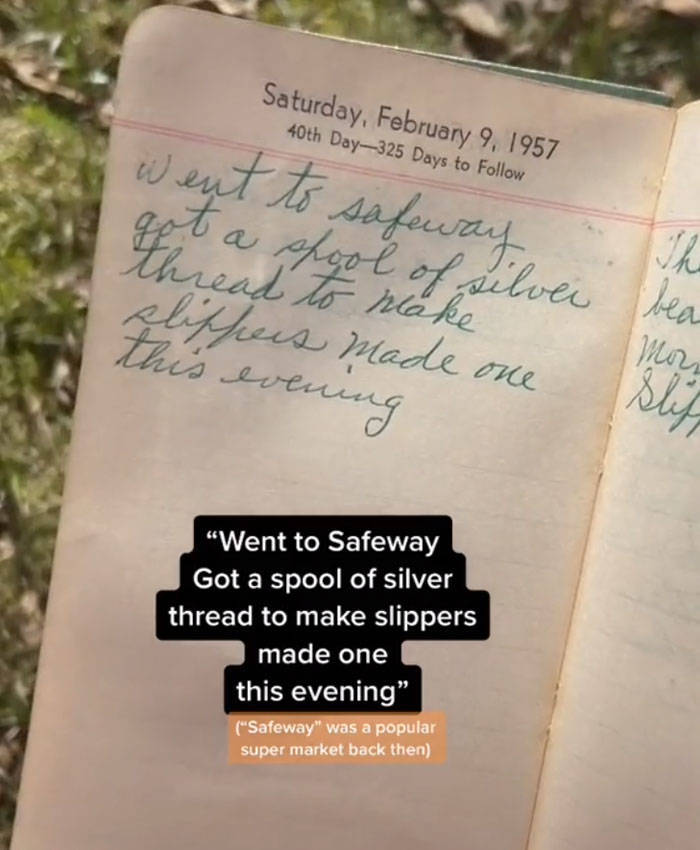 The channel has been going viral since the start. So far it has over 8.2 million collective views across 10 videos (as of the moment of this article) with over 1.2 million likes and nearly 200,000 followers. And the videos keep coming out every few days or so with a new diary entry. 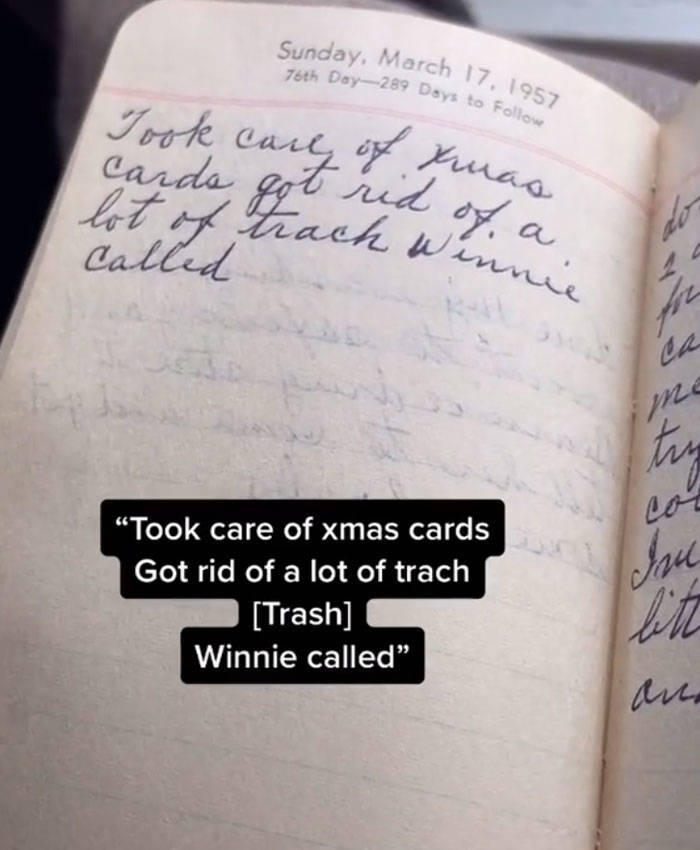