Battle to the death: Buffalo and lion endure epic hour-long fight… which leaves both animals with fatal injuries 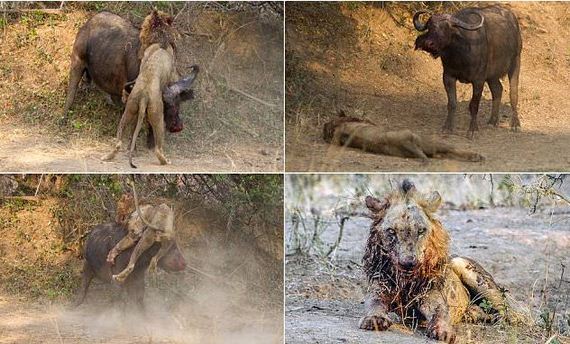 Cast out by his pride, this starving lion was forced to take on a fully-grown buffalo in his desperate bid to survive.
What ensued was a brutal hour-long battle leaving both animals bloodied, exhausted and with fatal wounds.

Dramatic images capture the lion savagely biting and clawing at the buffalo’s mouth, the big cat’s face smeared with blood from where he’s been gored by his heavier and larger opponent’s horns. 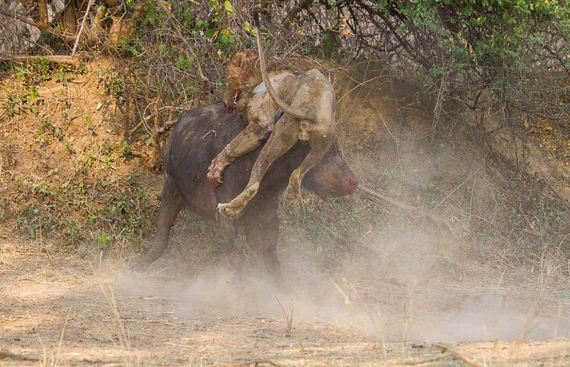 Tossed around: A male lion is flung into the air after attacking a lone female buffalo in the South Luangwa National Park in Zambia 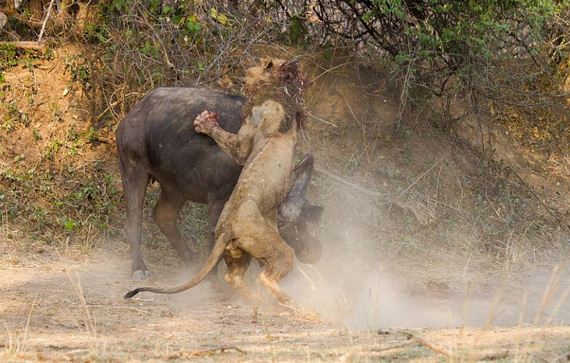 Starving: The hungry six-year-old lion was suffering from mange, a type of skin disease, and had become detached from his pride 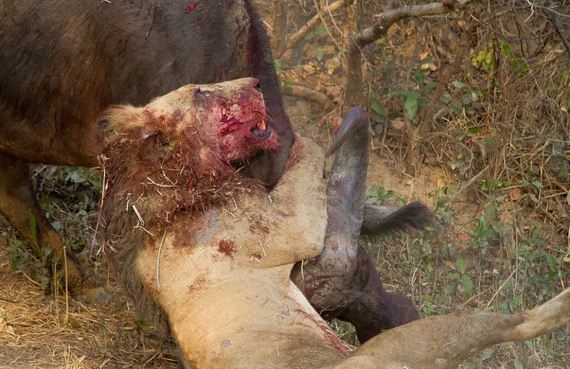 Bloody battle: Dramatic images capture the lion biting and clawing at the buffalo’s mouth, the big cat’s face smeared with blood and dust 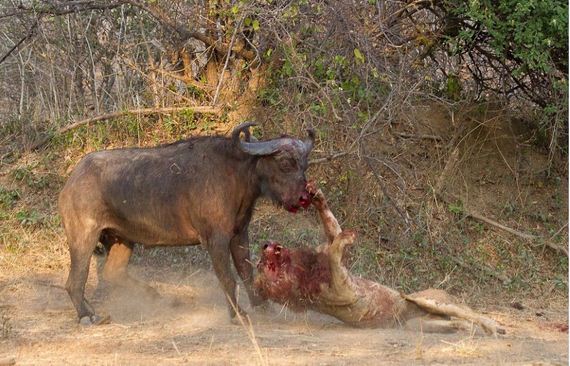 Clinging on: The lion digs his claws into the buffalo’s face as he attempts to pull the animal downwards to deliver a killer bite

Exhausted: Both battle-worn animals appear to have little energy left after fighting for an hour in the national park in Zambia 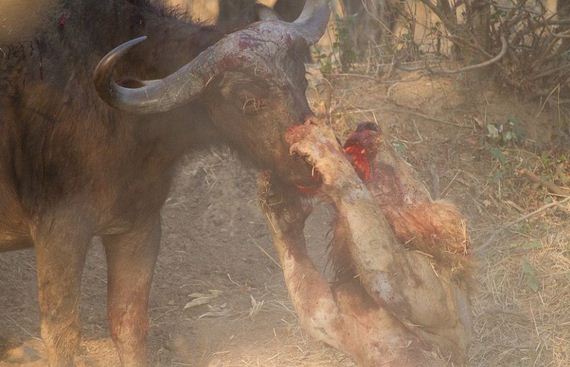 Final attack: The lion sinks his teeth into the buffalo’s mouth – but the attack is not enough to bring down the much larger animal 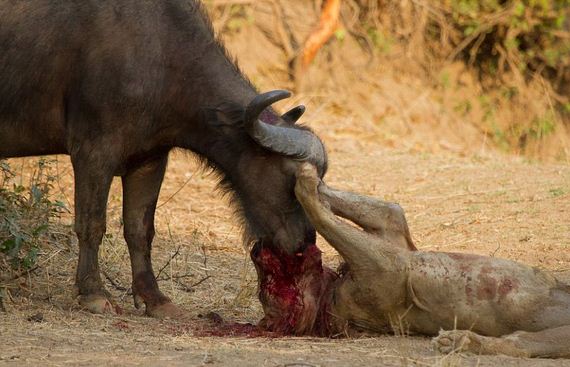 Battle for survival: The incredible pictures were taken by Matt Armstrong-Ford, 25, an amateur photographer from Eastbourne 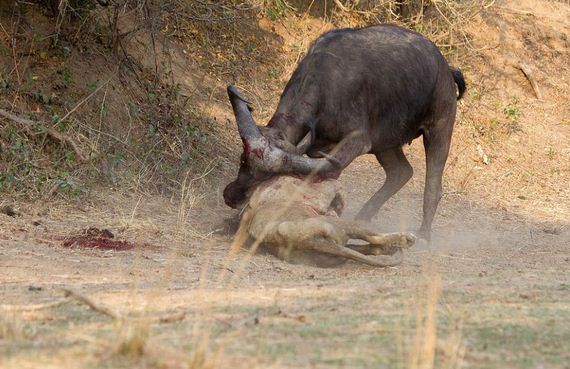 Herd arrives: As the lion prepares to rise, more buffalo arrive with another of the animals delivering a lethal blow to the feline 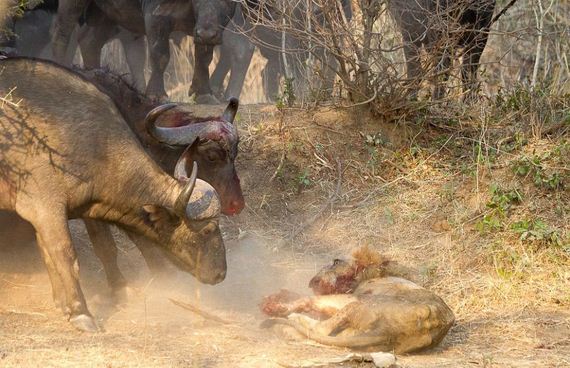 Beaten: Caked in blood from where he has been gored by the buffalo’s horns, the male lion lies beaten on the dusty ground 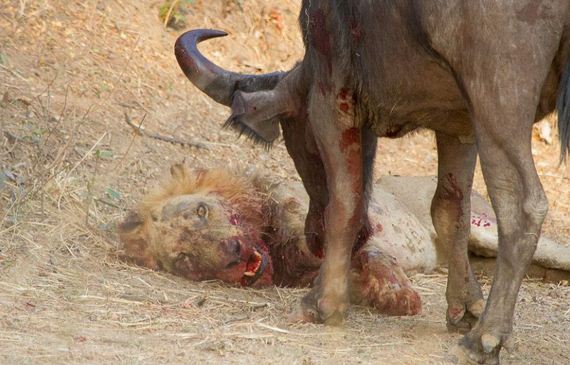 Fatal wounds: Both animals died as a result of the clash. The lion succumbed to injuries two days later while the buffalo later died of infection 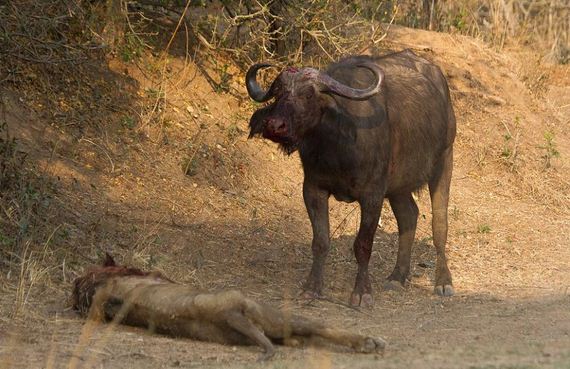 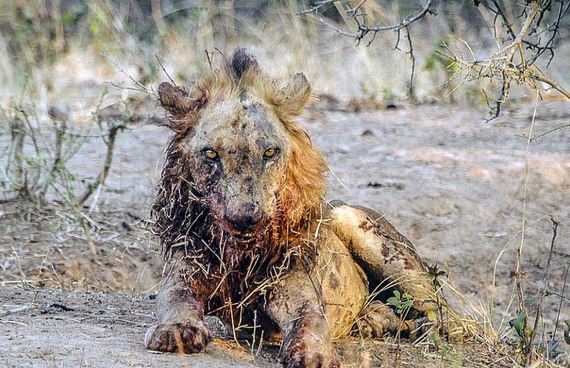 Nothing left to give: The majestic badly-wounded animal died two days after the battle in the South Luangwa National Park in Zambia