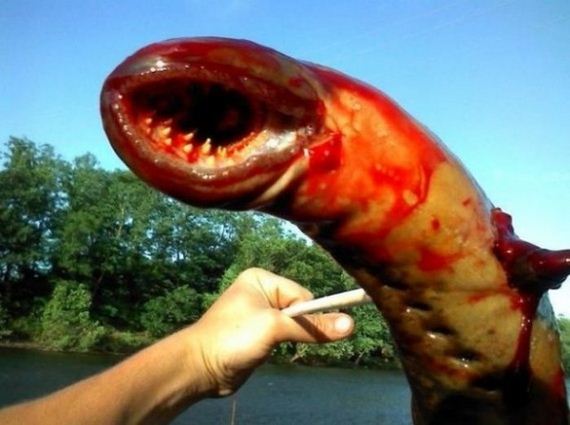 Animals that you didn’t know existed.

Lamprey
Lampreys are a type of jawless fish that live mostly in coastal and fresh waters whose adults are characterized by a toothed, funnel-like sucking mouth. They attach themselves to fish and suck their blood. Lampreys have been around for nearly 300 millions years and their body structure has remained relatively unchanged. 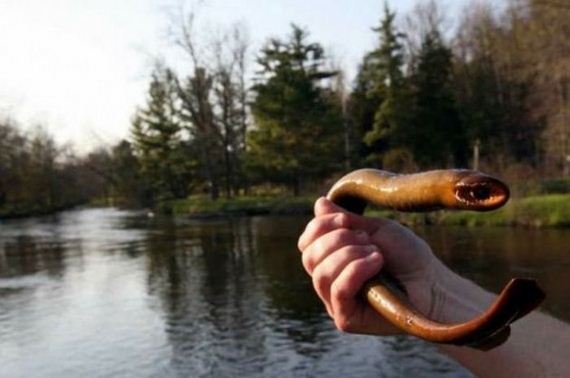 The Dhole
The Dhole is a species of canid native to South and Southeast Asia. The dhole is a highly social animal, living in large clans which occasionally split up into small packs to hunt. It primarily preys on medium-sized ungulates, which it hunts by tiring them out in long chases, and kills by disemboweling them. Though fearful of humans, dhole packs are bold enough to attack large and dangerous animals such as wild boar, water buffalo, and even tigers. 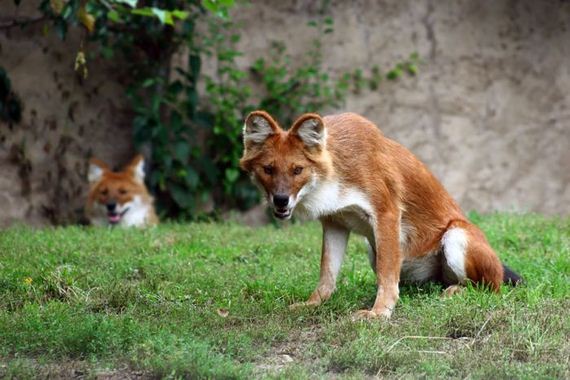 The Babirusa
Babirusa, meaning “Hog-deer”, are members of the pig family found in Wallacea, or specifically the Indonesian islands of Sulawesi, Togian, Sula and Buru. If a babirusa does not grind its tusks (achievable through regular activity), they will eventually keep growing so as to penetrate the animal’s own skull. 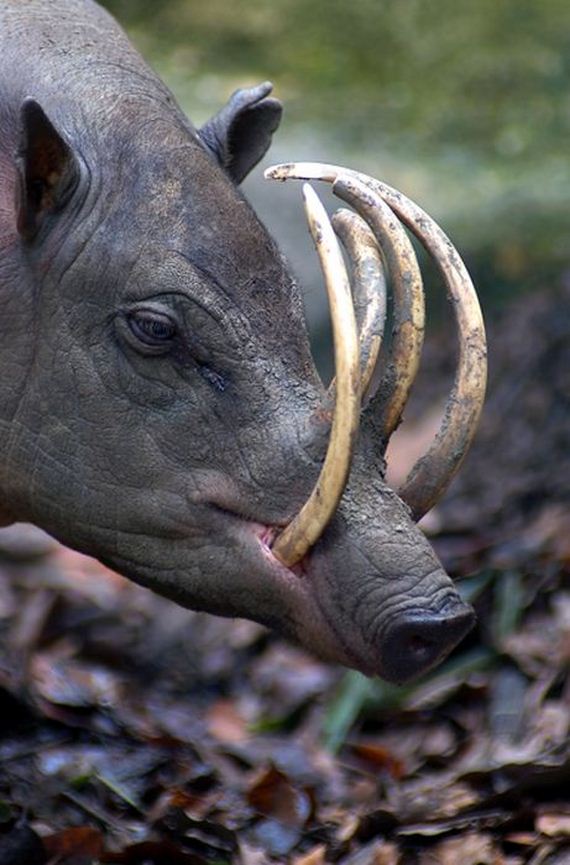 Pink Fairy Armadillo
The pink fairy armadillo is approximately 3.5-4.5 inches long, excluding the tail, and is pale rose or pink in color. It has the ability to bury itself completely in a matter of seconds if frightened. It is a nocturnal animal and it burrows small holes near ant colonies in dry soil, and feeds mainly on ants and ant larvae near its burrow. It uses large front claws to agitate the sand, allowing it to almost swim through the ground like it is water. It is torpedo-shaped, and has a shielded head and back. 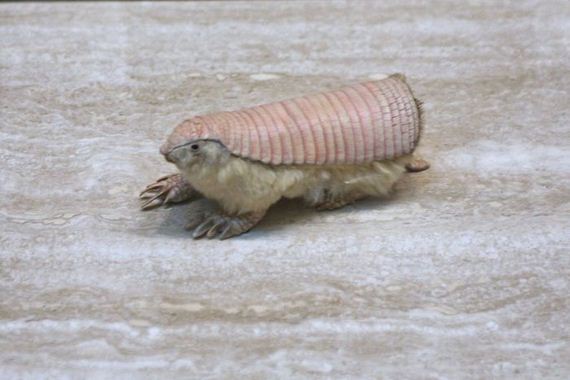 The Fossa
The fossa is a cat-like, carnivorous mammal that is endemic to Madagascar. The fossa is the largest mammalian carnivore on the island of Madagascar and has been compared to a small cougar. It has semi-retractable claws and flexible ankles that allow it to climb up and down trees head-first, and also support jumping from tree to tree. 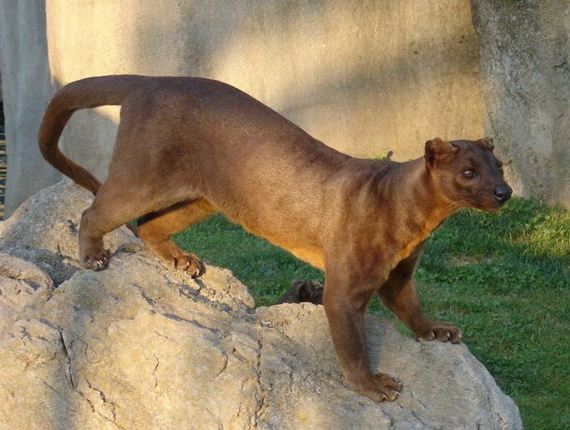 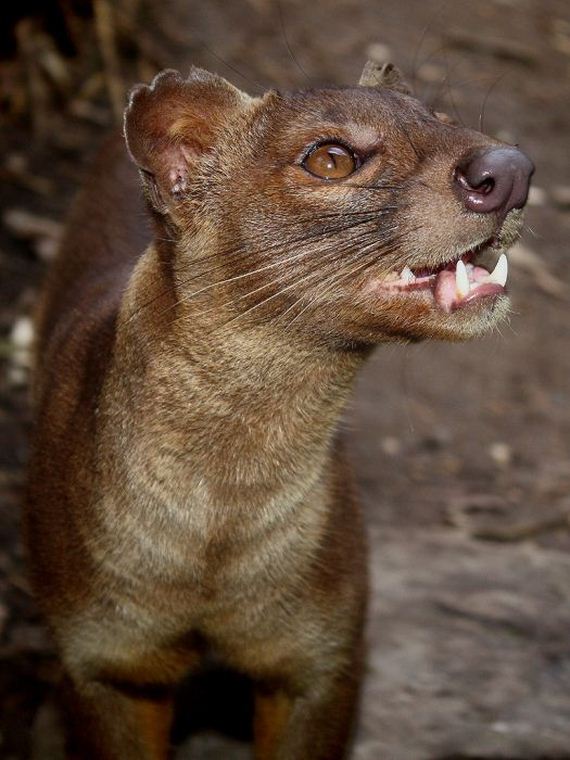 The Gerenuk
The gerenuk, also known as the Waller’s gazelle, is a long-necked species of antelope found in dry thorn bush scrub and desert in Eastern Africa. The word gerenuk comes from the Somali language, meaning “giraffe-necked”. Gerenuks have a relatively small head for their body, but their eyes and ears are proportionately large. Gerenuks seldom graze but browse on prickly bushes and trees, such as acacias. They can reach higher branches and twigs than other gazelles and antelope by standing erect on their rear legs and stretching their elongated necks. 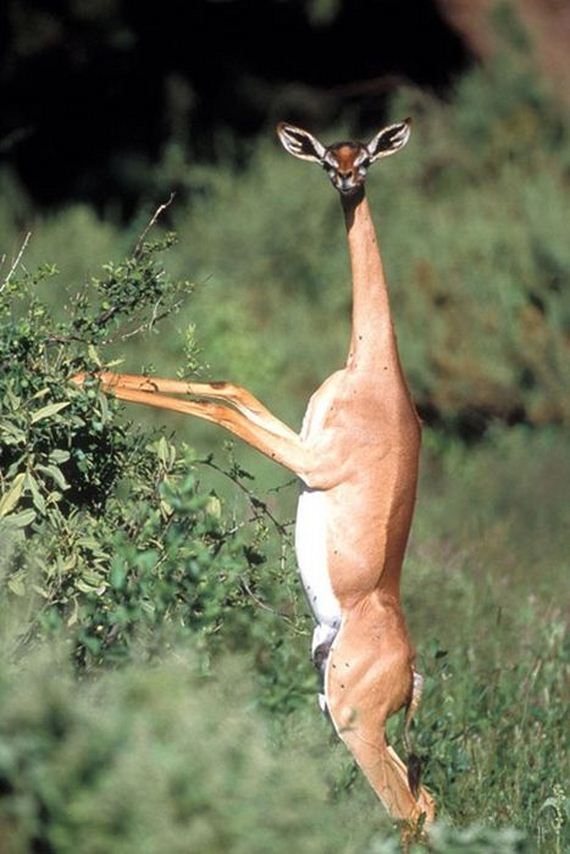 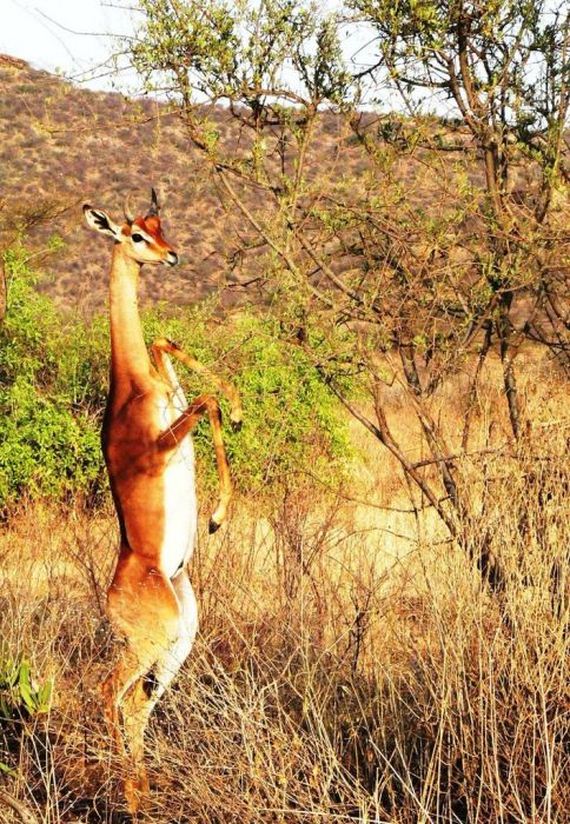 Naked Mole Rat
This creature has a lot of characteristics that make it very important to human beings. For one it is resistant to cancer. They also live up to 28 years, which is unheard of in mammals of its size. It seemingly does not age much in those 28 years either. It remains “young, healthy and fully fertile for almost all its days, which for an elderly animal is equivalent to an 80-year-old woman having the biological make-up of someone 50 years younger.” The naked mole rat is used in both cancer research and the study of aging. Not only making it a bizarre creature, but an incredibly important creature as well. 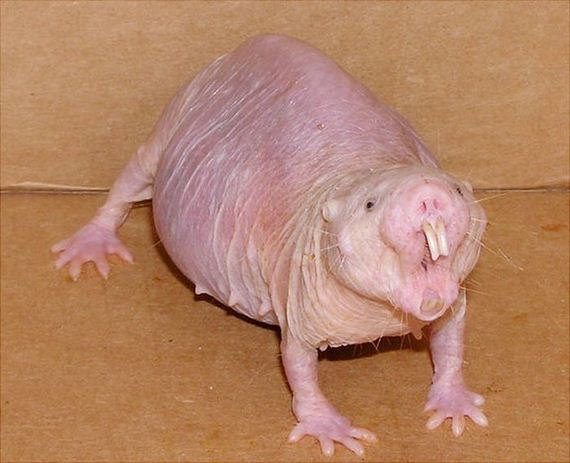 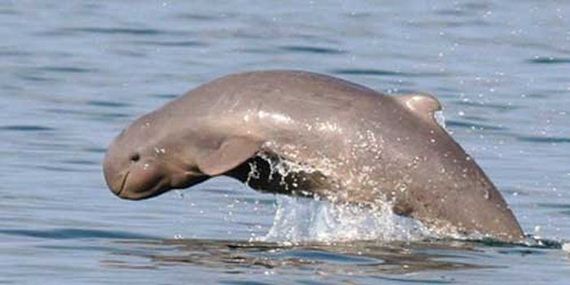 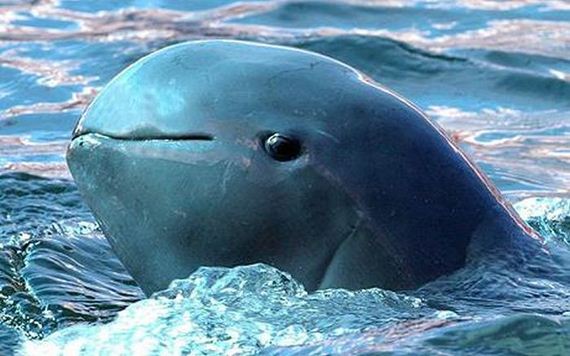 Markhor
The markhor is a large species of wild goat that is found in northeastern Afghanistan and Pakistan. The species is classed by the IUCN as Endangered, as there are fewer than 2,500 mature individuals. The markhor is the national animal of Pakistan. While chewing the cud, a foam-like substance comes out of its mouth which drops on the ground and dries. This foam-like substance is sought after by the local people, who believe it is useful in extracting snake poison from snake bitten wounds. 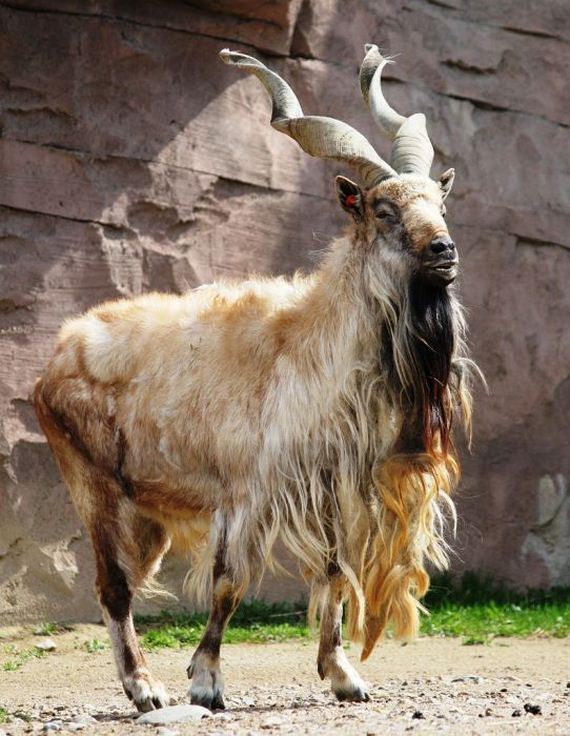 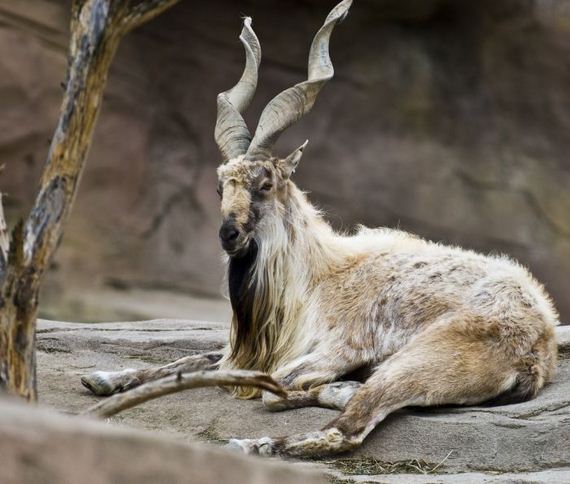 Yeti Crab
Also known as the Kiwaidae, this crab is a type of marine decapod living at deep-sea hydrothermal vents and cold seeps. The animals are commonly referred to as “yeti crabs” because of their claws and legs, which are white and appear to be furry like the mythical yeti 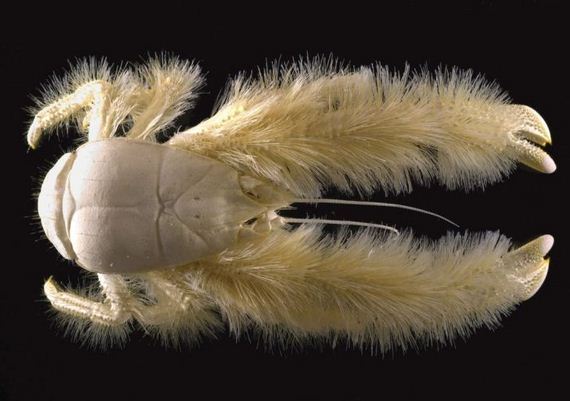 Snub-Nosed Monkey
Snub-nosed monkeys live in various parts of Asia and get their name from the short stump of a nose on their round face. Snub-nosed monkeys inhabit mountain forests, in the winter moving into deeply secluded regions. They spend the majority of their life in the trees and live together in very large groups of up to 600 members. They have a large vocal repertoire, calling sometimes solo while at other times together in choir-like fashion. 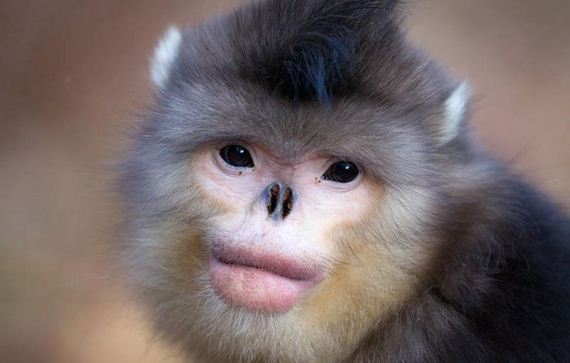 The Maned Wolf
The Maned Wolf is the largest canid in South America, resembling a large fox with reddish fur. This mammal is found in open and semi-open habitats, especially grasslands with scattered bushes and trees throughout South America. The maned wolf is the tallest of the wild canids and it’s long legs are most likely an adaptation to the tall grasslands of its native habitat. 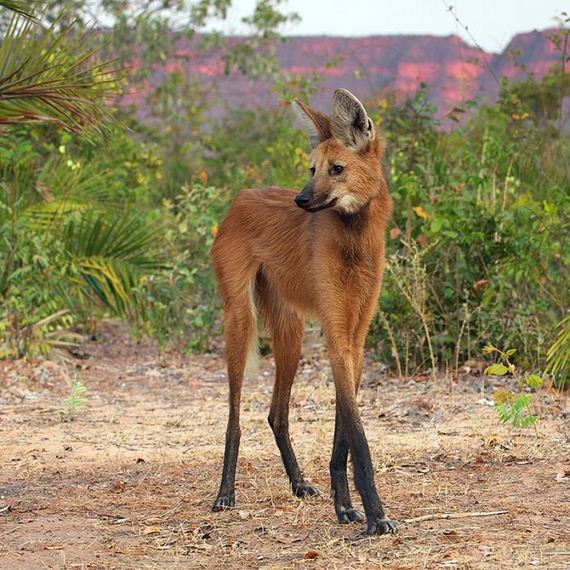 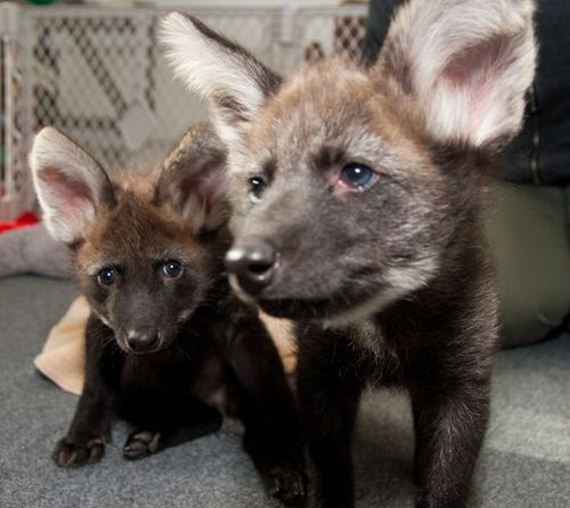 Southern Red Muntjac
Found in south Asia, it has soft, short, brownish or greyish hair and is omnivorous, feeding on grass, fruits, shoots, seeds, birds’ eggs as well as small animals. It sometimes even displays scavenging behavior, feeding on carrion. It gives calls similar to barking, usually upon sensing a predator. Males are extremely territorial and—despite their diminutive size—can be quite fierce. They will fight each other for territory using their antlers or their tusk-like upper canine teeth, and can even defend themselves against certain predators such as dogs. 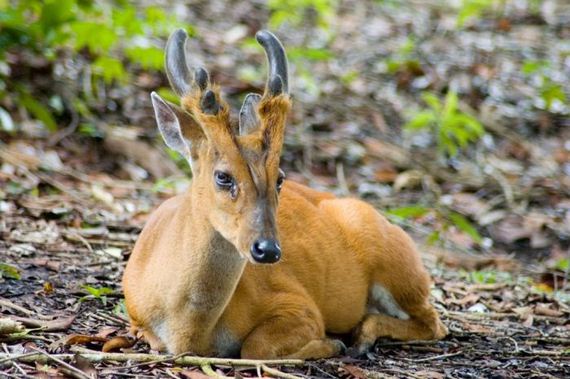 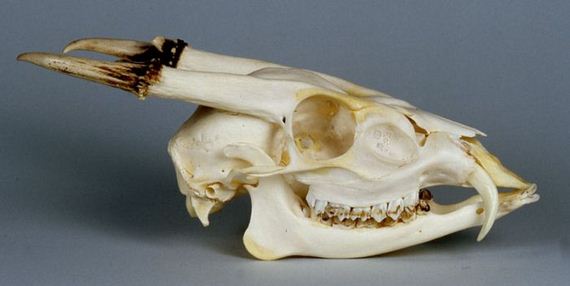 Cyphonia Clavata
It is a species of treehopper called Cyphonia Clavata that literally has an ant growing out of its head. Well not literally, the ant-like thing on its head is an appendage that hides the treehopper’s actual body from predators. 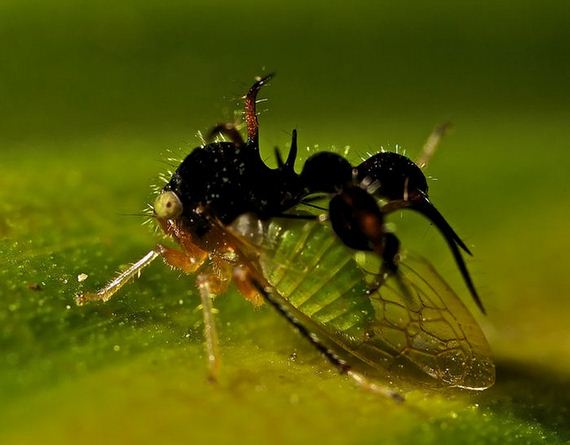 Sunda Colugo
Also known as The Sunda flying lemur, it is not actually a lemur and does not fly. Instead, it glides as it leaps among trees. It is strictly arboreal, is active at night, and feeds on soft plant parts such as young leaves, shoots, flowers, and fruits. The Sunda Coluga can be found throughout Southeast Asia in Indonesia, Thailand, Malaysia, and Singapore 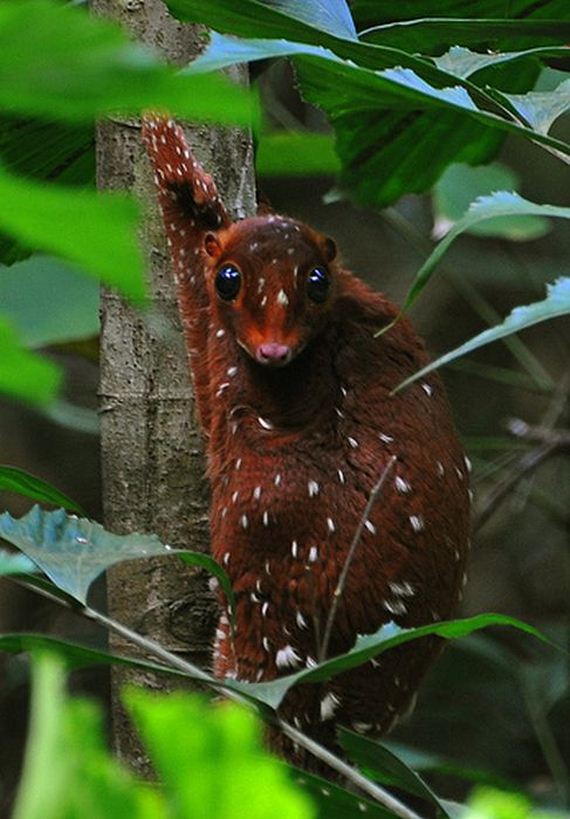 Tufted Deer
The Tufted Deer is a small species of deer characterized by the prominent tuft of black hair on its forehead. It is a close relative of the muntjac, living somewhat further north over a wide area of central China. It is a timid animal, mainly solitary or found in pairs and prefers places with good cover, where it is well camouflaged. 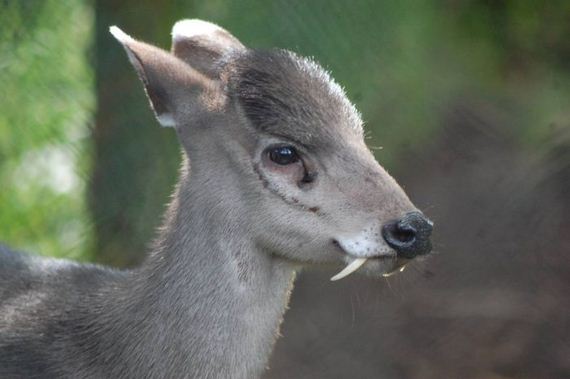 Raccoon Dog
The Raccoon Dog, or Tanuki, is a canid indigenous to East Asia. The raccoon dog is named for its resemblance to the raccoon, to which it is not closely related. They are very good climbers and regularly climb trees. 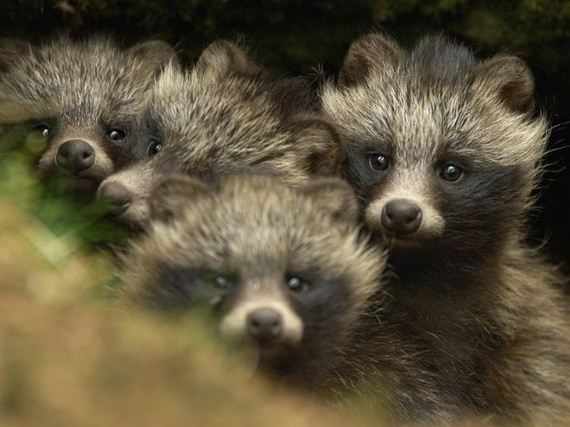 Patagonian Mara
The Patagonian Mara is a relatively large rodent found in parts of Argentina. This herbivorous, somewhat rabbit-like animal has distinctive long ears and long limbs and its hind limbs are longer and more muscular than its forelimbs. 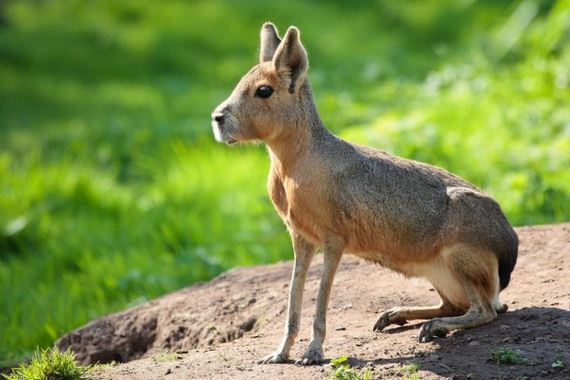 The Amazonian Royal Flycatcher
The Amazonian Royal Flycatcher is found in forests and woodlands throughout most of the Amazon basin. They are about 6 1/2 inches in length and like to dart out from branches to catch flying insects or pluck them from leaves. They build very large nests (sometimes up to 6 feet long) on a branches near water. The nest hangs over the water which makes it hard for predators to reach. 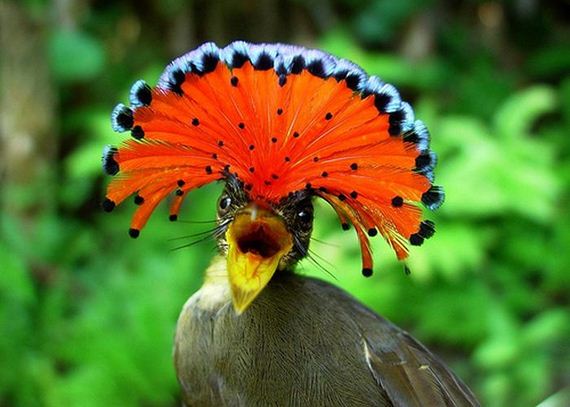 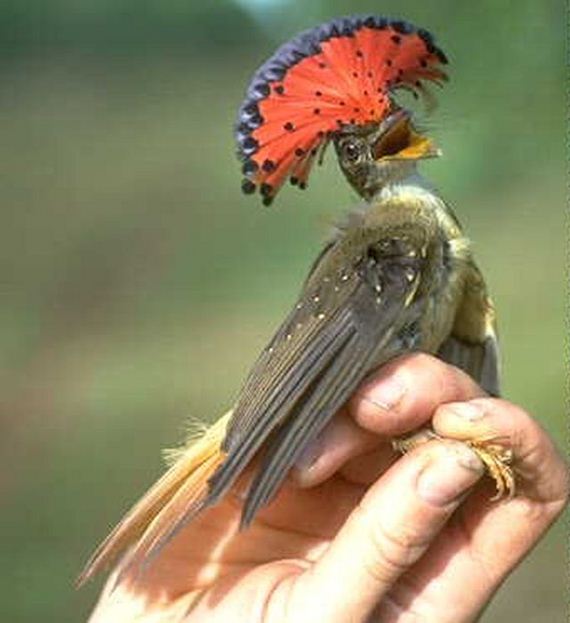 Zebra Duiker
The zebra duiker is a small antelope found in Ivory Coast and other parts of Africa. They have gold or red-brown coats with distinctive zebra-like stripes (hence the name) Their prong-like horns are about 4.5 cm long in males, and half that in females. They live in lowland rainforests and mostly eat leaves and fruit. 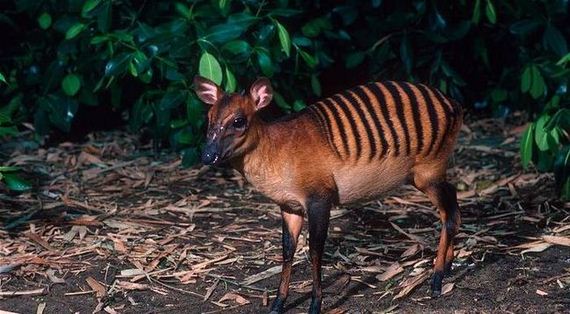 Star-Nosed Mole
The star-nosed mole is a small mole found in wet low areas of eastern Canada and the northeastern United States. It is easily identified by the 11 pairs of pink fleshy appendages ringing its snout, which is used as a touch organ with more than 25,000 minute sensory receptors, known as Eimer’s organs, with which this hamster-sized mole feels its way around.